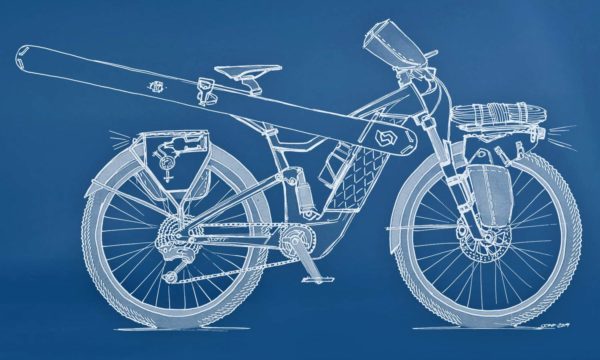 Scott bikes (and skis, too actually) have a new, proof-of-concept project e-bike developed to give adventure ski tourists a more efficient mountain approach in search of fresh powder. Starting with a full-suspension trekking e-bike, Scott looked at how they could haul all of the gear needed for a backcountry skiing adventure in any easy-to-manage setup that would shuttle a skier high up into the mountains to still be fresh when it was time to strap on skis.

Scott says the concept, turned project bike was developed to meet a real need – backcountry skiers who can’t simply drive into remote locations to ski and would have to hike up to good snow before really heading off the track. 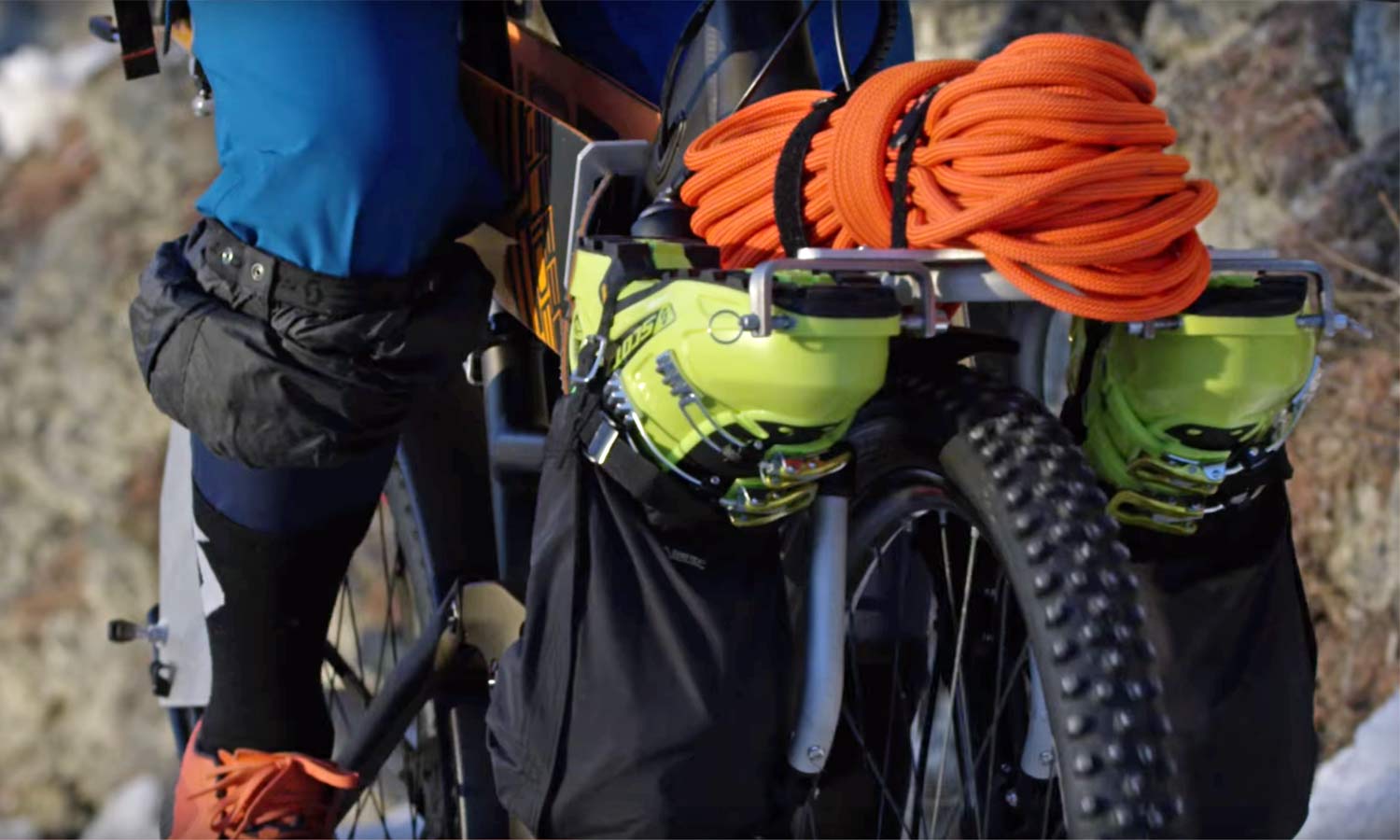 So an e-bike loaded down with gear seemed to them like a reasonable way to make the mountain approach up passes still closed to traffic over the winter into the spring. Even as the good snow receded with the Spring thaw, the Sk-eRide could get you to the pass without wasting energy since you were still going to keep to hike up further in the deep snow to earn your turns. 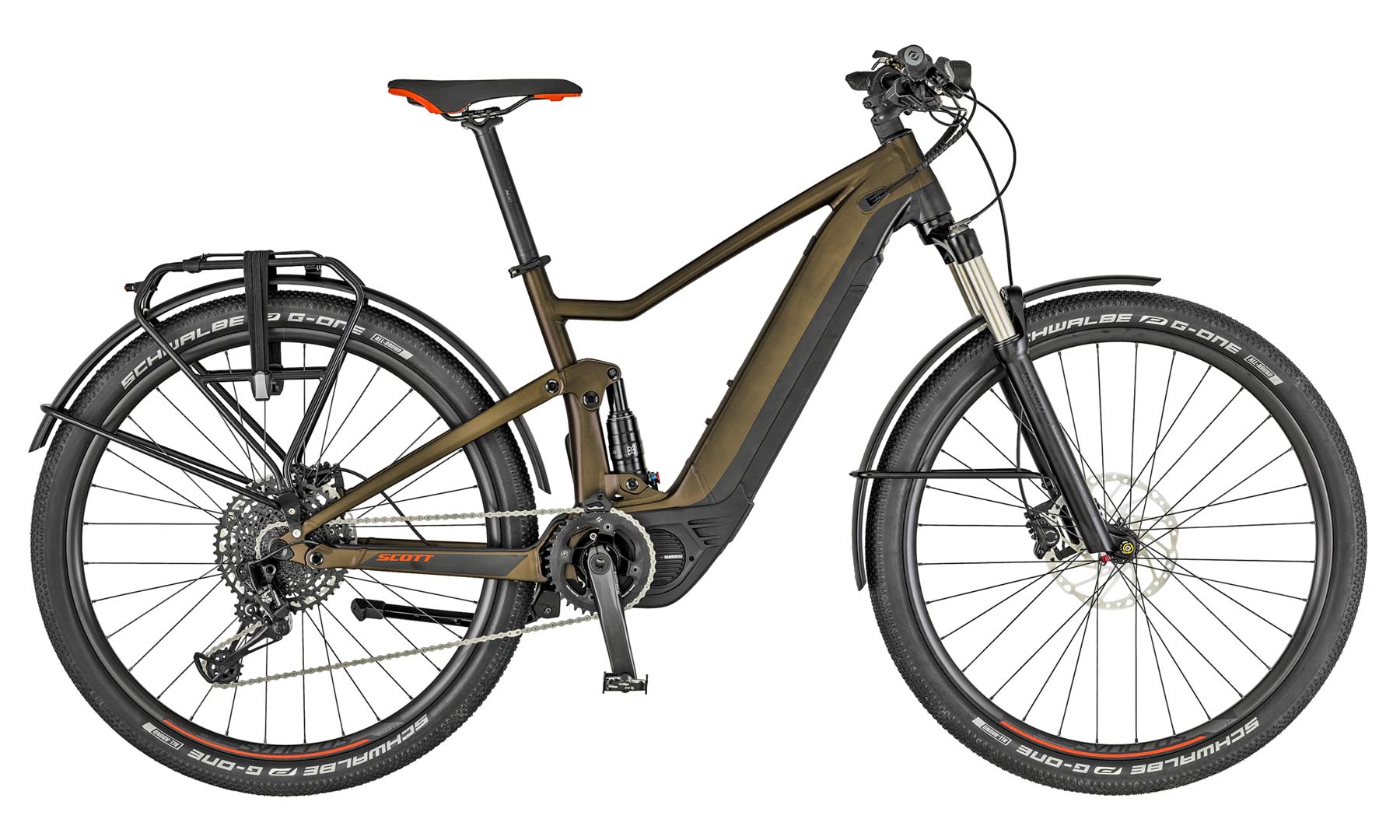 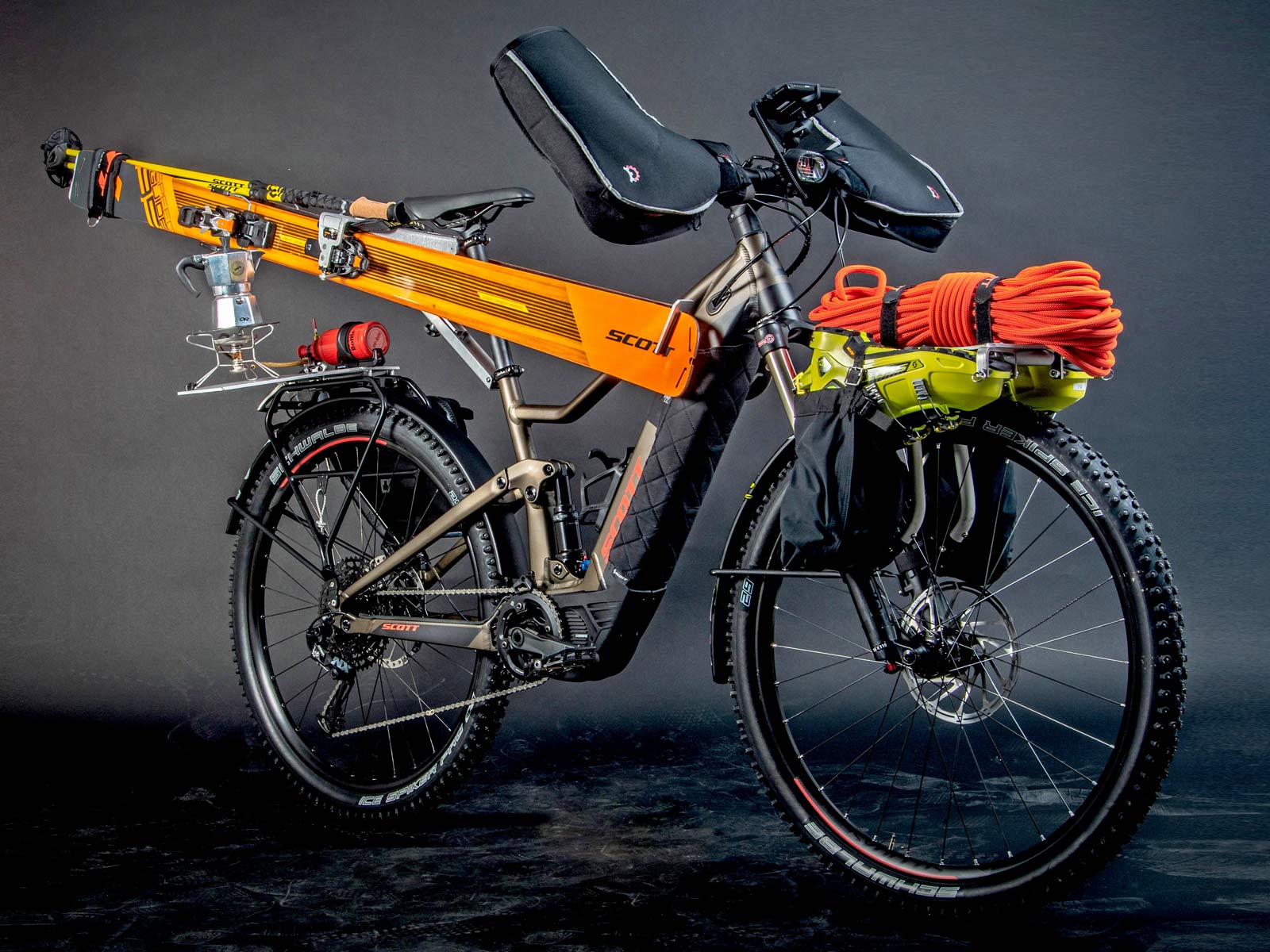 Then, they kept hanging more gear on top of it. Scott makes plenty of ski touring gear too, so Speedguide 95 skis rounded out a versatile ski tour setup. 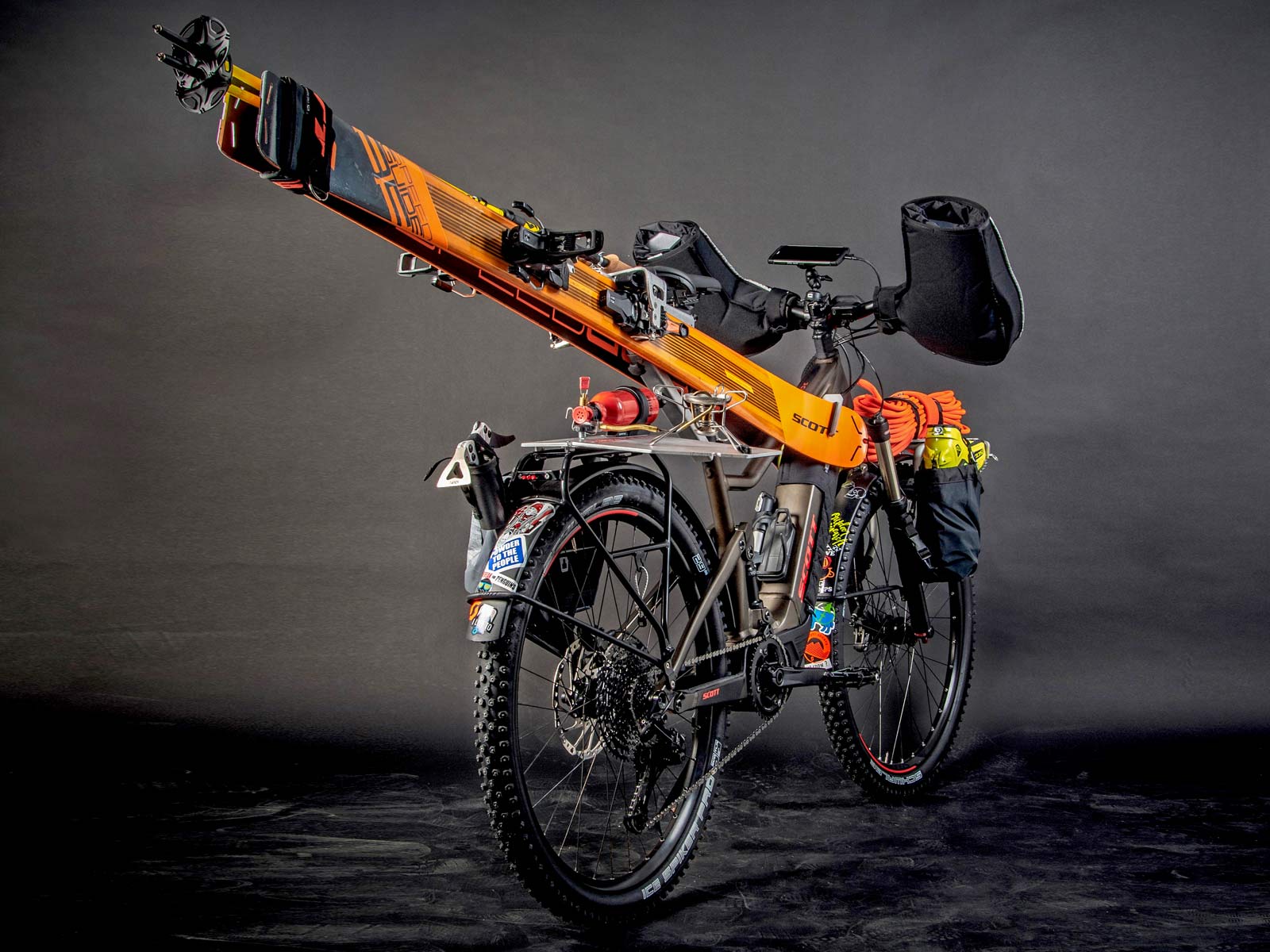 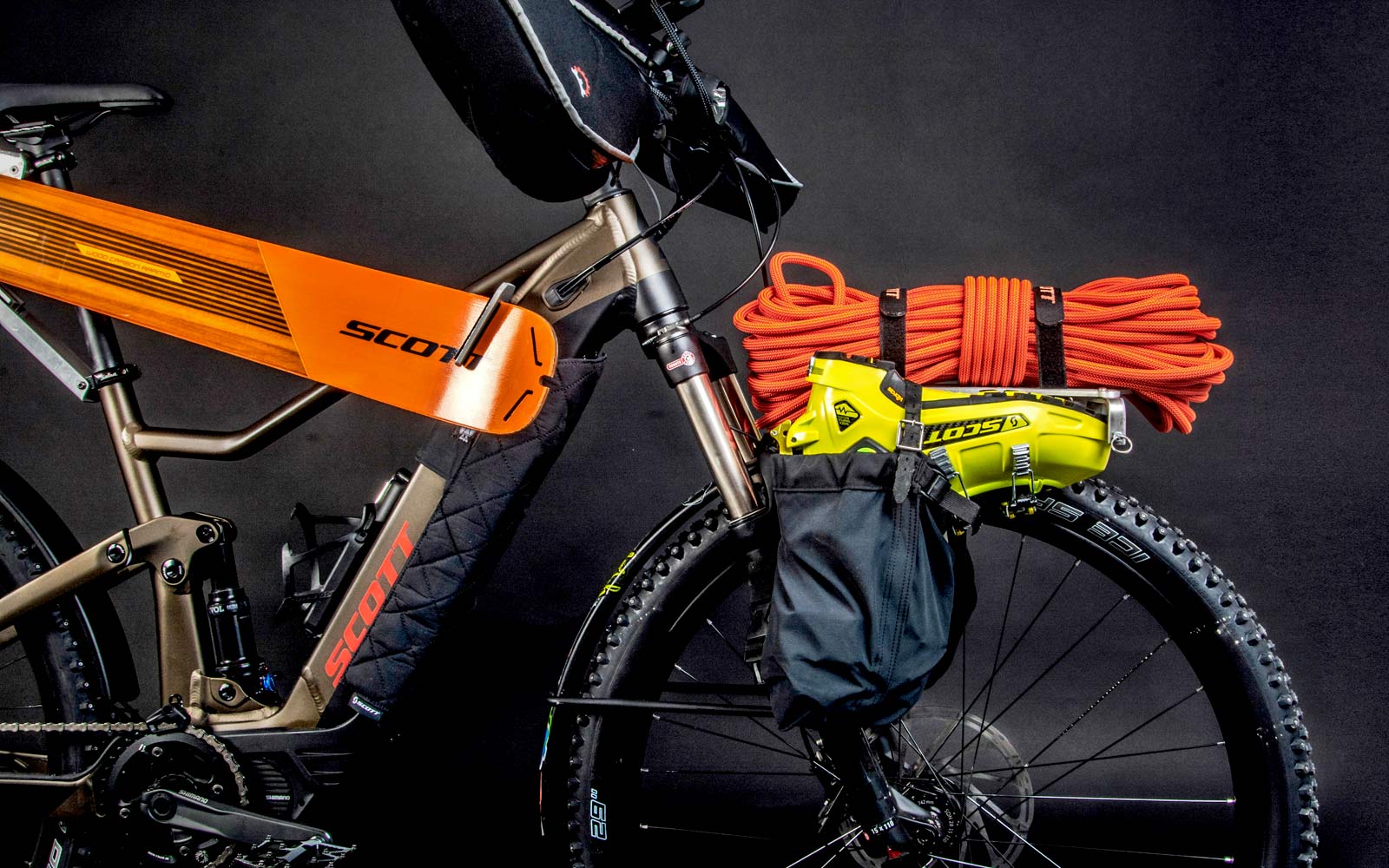 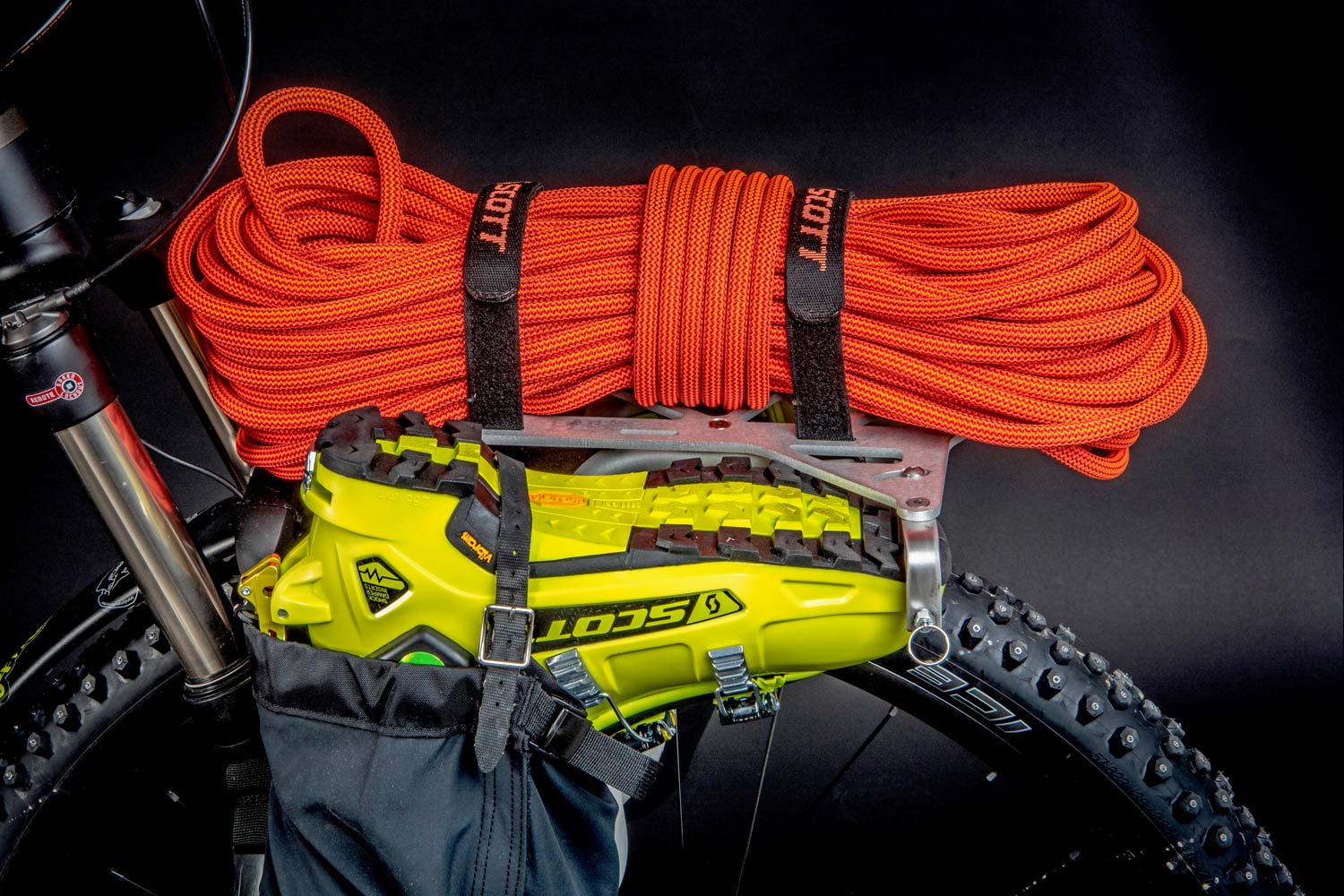 The concept went beyond just a couple of standard racks that you would lash everything down to. Scott didn’t like the idea of fiddling with straps & buckles with cold fingers, so they fabricated customized carriers to just drop the skis in place, clip your Superguide boots directly into integrated binding clamps on the front rack, a protected tube for ice axes, velcro rope straps, and custom-stitched compact gear bags 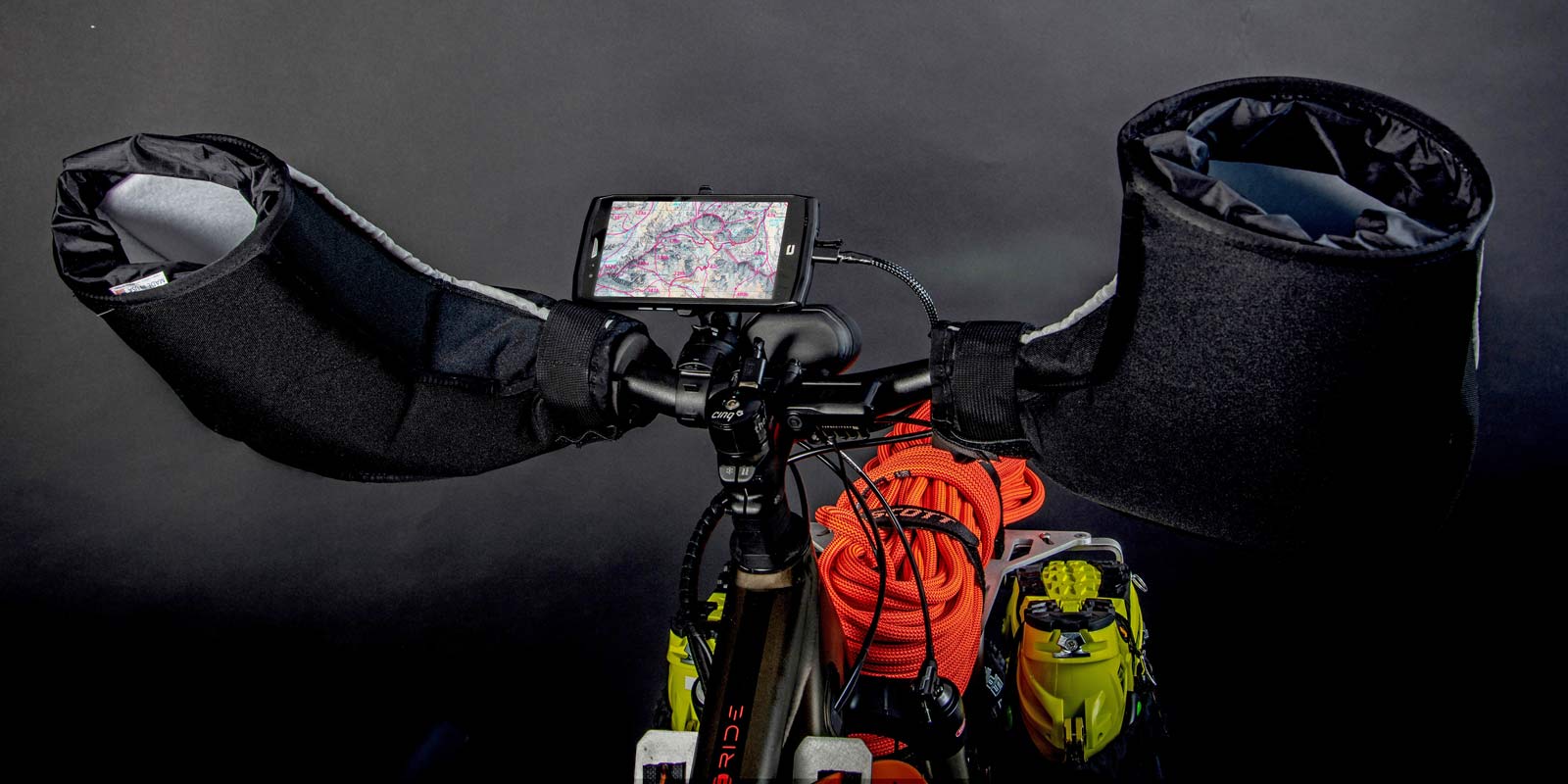 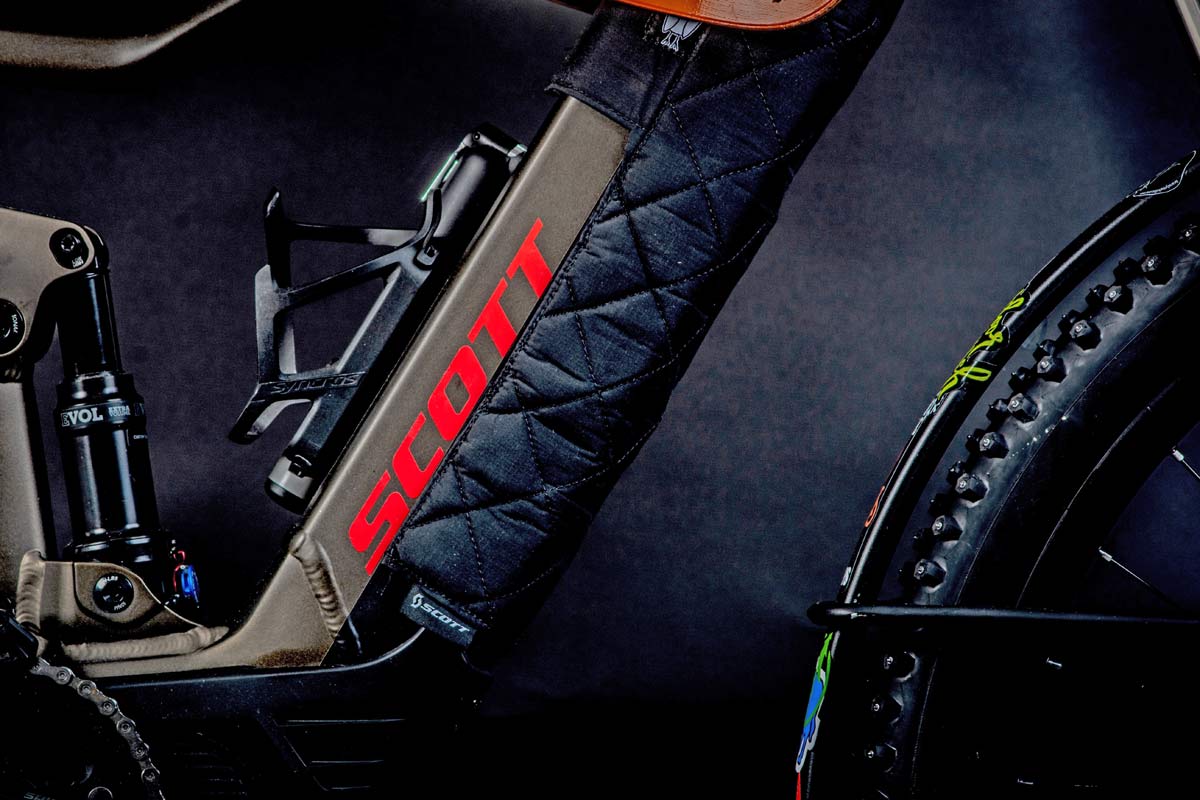 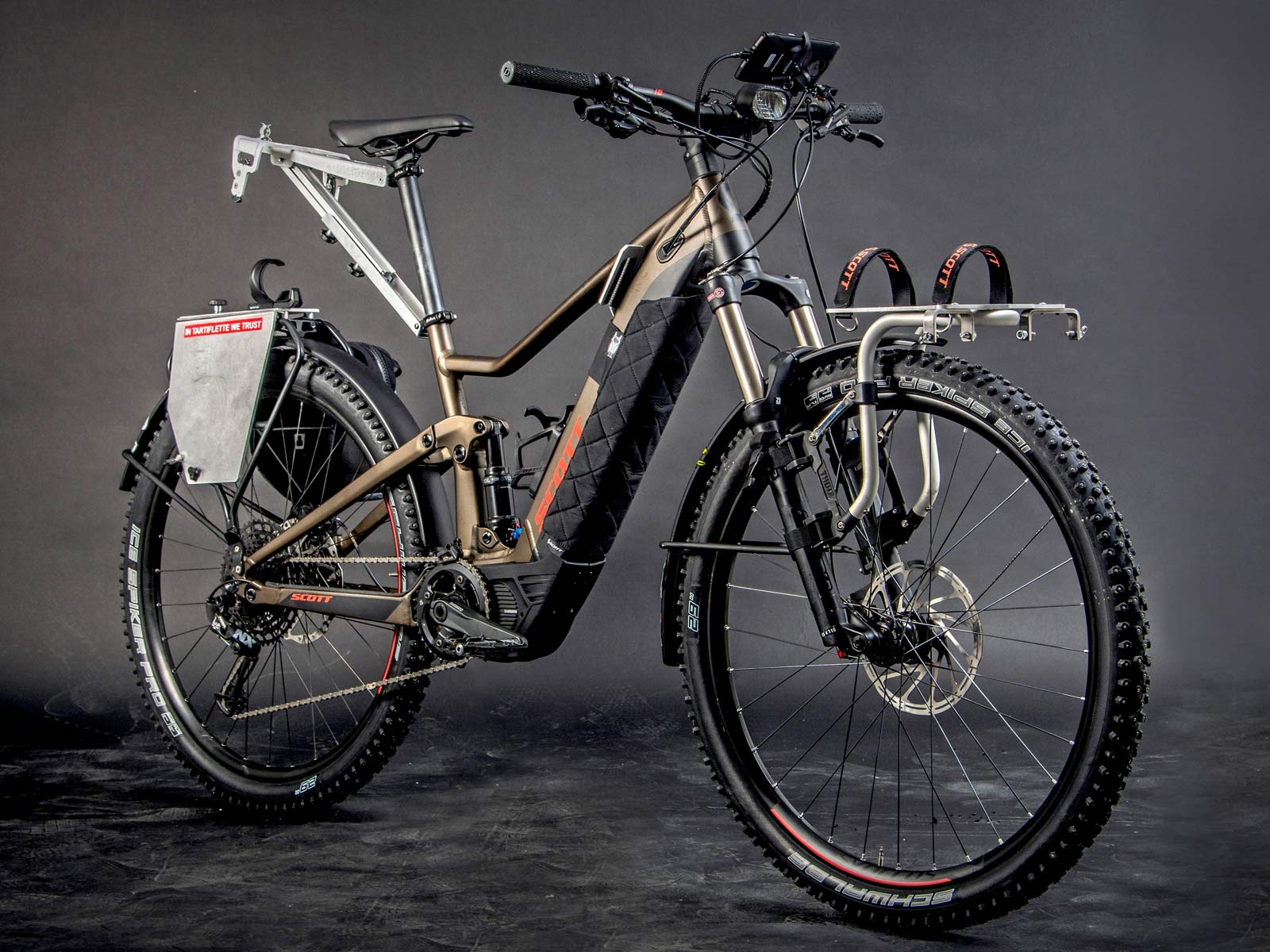 It really is all in the details when you are crafting such a use-specific project bike like this anyway. And while I would argue that the complete setup is unwieldy-looking, Scott does hot some nice details like a battery insulation blanket to try to keep the cold wind from sapping juice from your power supply, a dynamo powered USB output to keep you smart phone maps charged (although why not directly off the main battery?), Supernova LED light to illuminate the pre-dawn ascent & dusk return home, Revelate hand warmers to keep your fingers protected from cold winds before you work up a sweat in the snow. 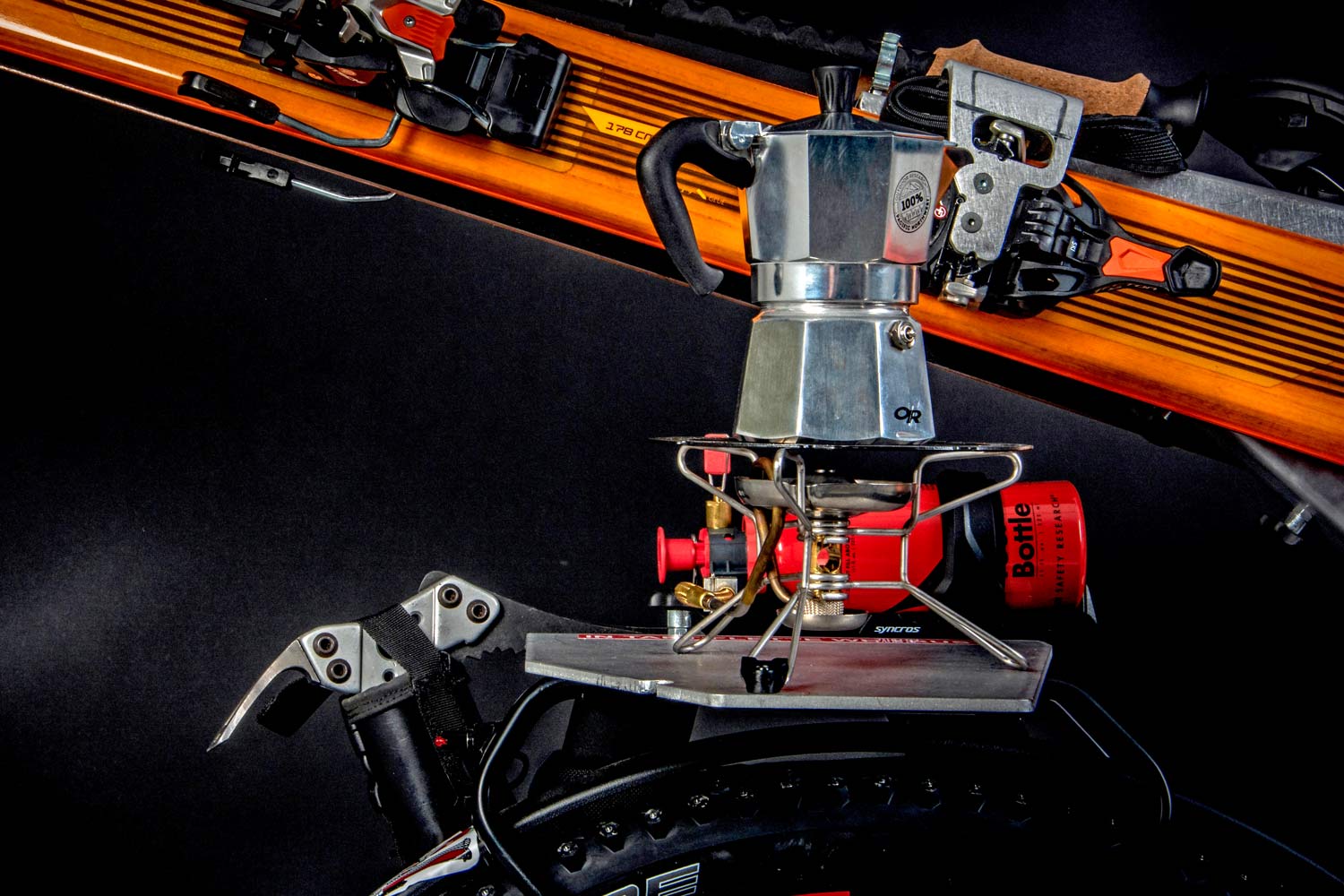 Oh yeah, and of course a foldaway table and mount for a MSR camp stove & a coffee pot. Because one thing cyclists & ski touring gear head hispters can agree on besides a post-ride ale, is brewing coffee outside. 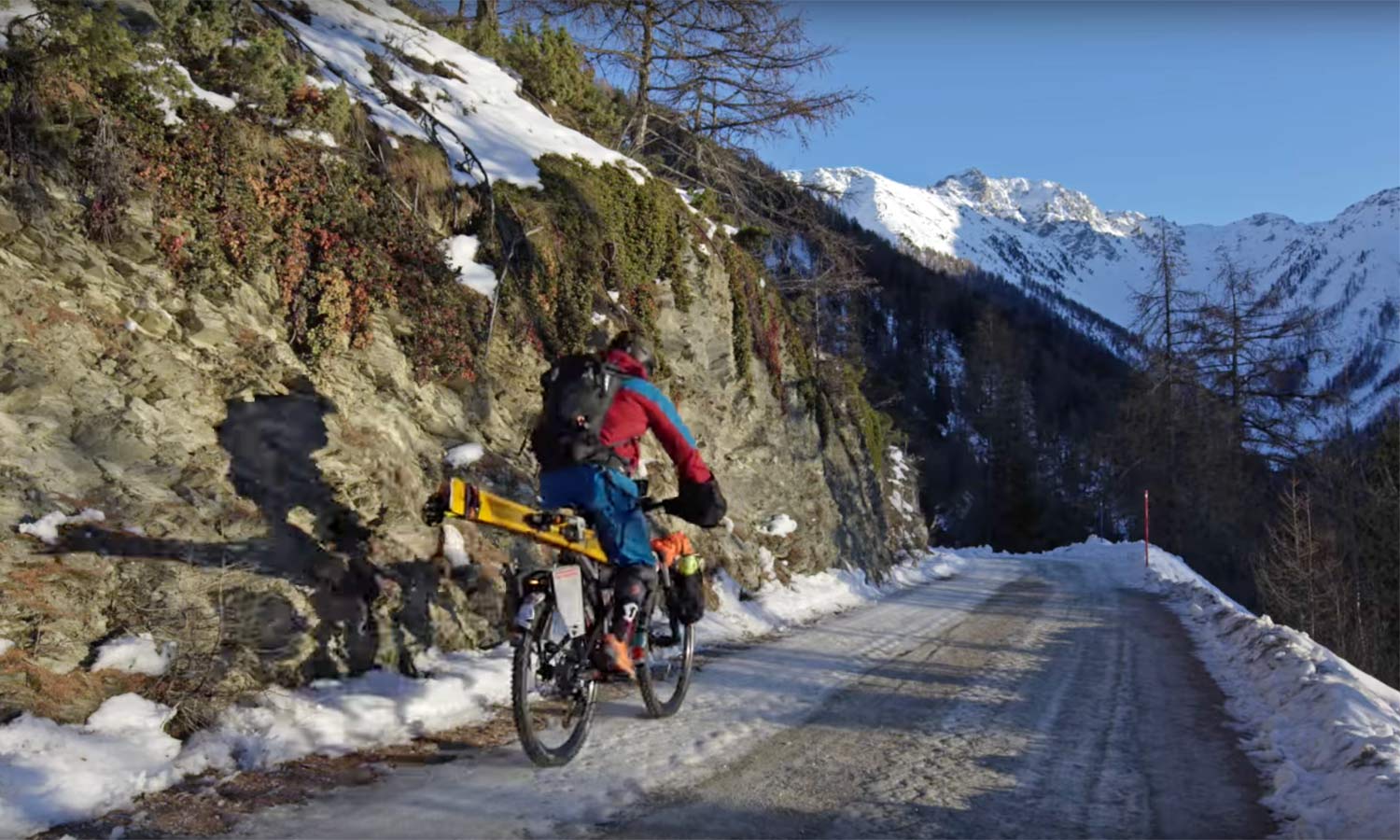 Scott promises they’ll take this contraption on all manner of winter adventures. So hopefully we might see videos of their eRide skimo exploits pop up in our Friday Roundups later this Spring.

snowmobiles will get you to better pow and will cost the same… just sayin.

This isn’t absurd at all, I’ve spent plenty of time trying to figure out ways to carry all of the ski touring gear required on a bike. Snowmobiles are good for accessing pow in the winter, but this seems like a perfect tool to access spring corn on closed roads or flat approaches, where the road surface is melted out or has patchy coverage. The Mount of the Holy Cross road approach is a perfect example of where an e-bike would be the perfect access tool.

The issue I see is the same with moto bike racks. How do you secure all your bike gear when you are skiing? There wont be a bike rack and locking to a tree isn’t secure at all when most people will be carrying a small saw. At least with a snow mobile most of the gear is the same, and you can ride in your ski boots.

I tend to hike out into the woods until out of sight and lock to a small tree. I always hope that people are honest, but I recognize that there are some bad eggs. Fortunately, there are very few people around where I recreate.

How is this not a fat bike? You’re supposed to stop as soon as you hit snow?

My thoughts exactly even plus tyres would be more suitable but just 2.3 is a laugh

on an icy path even the biggest tires will lead you to the ground, spike tires are more reliable

Lithium batteries and cold weather? lol Ask Tesla owners how they do… and those have sophisticated heating systems.

The cold weather does have an impact on the battery but it’s not by much (range loss between 5-10%).

It comes with a special harness that lets you carry it on your back when you ski down. Also, they will have an optional jump seat.

So you get to the snow and then? Leave the bike there? You’ll have to ski uphill to get the bike after you’re done skiing. Also no fat bike, yeah.

Velo Kitty – the battery has a quilted cover. Surely this must be enough.