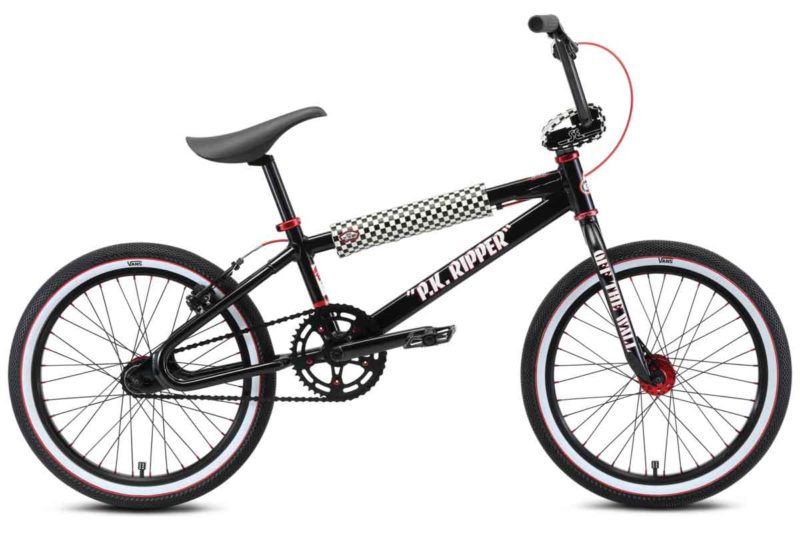 Aside from making shoes that worked well for flat pedals, Vans played a big role in the early ears of BMX by sponsoring many racers and events. SE Bikes decided to pay tribute to Vans’ involvement in the sport, so they’ve crafted three limited edition Vans BMX bikes.

The Vans PK Ripper, Blocks Flyer and Big Ripper were set for release between Aug. 24th and 26th, with one model coming out each day (unfortunately the PK Ripper sold out very quickly, but it’s still included here so you can check it out). Each of these limited edition bikes are individually numbered on the inside of the rear dropout, and they all feature a selection of Vans branded components and accessories – including waffle-sole patterned tires and grips! 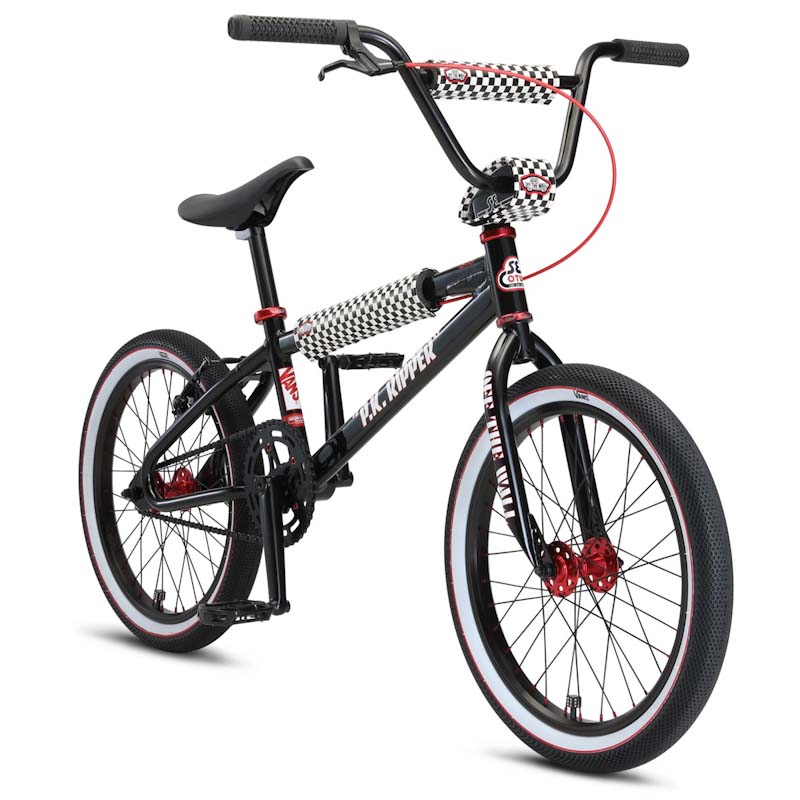 The legendary PK Ripper made waves when it was first introduced, and arguably never lost its cool factor – in fact, this bike has remained in production for over 40 years! SE claims it’s the longest-running model in BMX history, and I (who spent my youth riding BMX) can’t think of anything that might contest it. Unfortunately the limited-edition Vans PK Ripper sold out in less than a day, but we might as well show you the bike.

Vans shoes fans will love the waffle sole pattern found on the Vans x Cult tires and grips. The brand’s famous checkerboard adorns the Vans three-piece padset, and you even get a pair of Vans ’66 dice valve caps to complete the retro look.

The complete bike weighs 24 lbs, and a set of SE Wheelie pegs are included. The Vans PK Ripper was only available to USA buyers through SE Bikes’ website, and they are already sold out. MSRP was $1049.99. 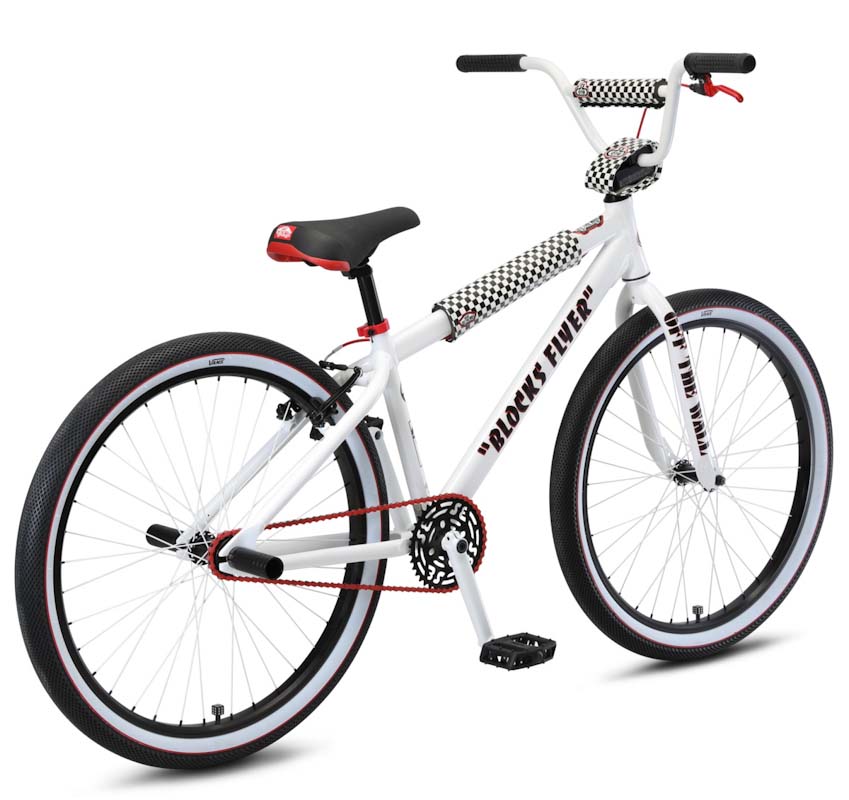 One of the most popular bikes in SE’s lineup is the Blocks Flyer.  This model stretches its BMX-style frame (and Landing Gear forks) to fit 26” wheels, making for a killer wheelie machine. Like the PK Ripper, the Blocks Flyer is made from 6061 aluminum and features floval tubing. There are a few modern touches however, like an internal headset and mid bottom bracket. The 26” rims are double-walled, and the rear hub rolls on sealed bearings. A three-piece tubular crankset spins the 39t front sprocket and SE’s Nylon fiber pedals.

The Vans Blocks Flyer gets the Vans x Cult waffle pattern tires and grips, checkerboard padset and dice valve caps. You also get a pair of Wheelie pegs and a Vans x SE Bikes Flyer seat with a super grippy cover to help keep your foot, knee, or whatever planted as you cruise one-wheeled up the street.

If you’re a freak for sneakers, you might want to know Vans has produced Vans Block Flyer shoes with reflective checkerboard details and Blocks Flyer sidewall art. Gotta get the shoes to match the bike, right?

The complete Blocks Flyer weighs 30.6 lbs. It is now available online and through select SE dealers for $819.99. 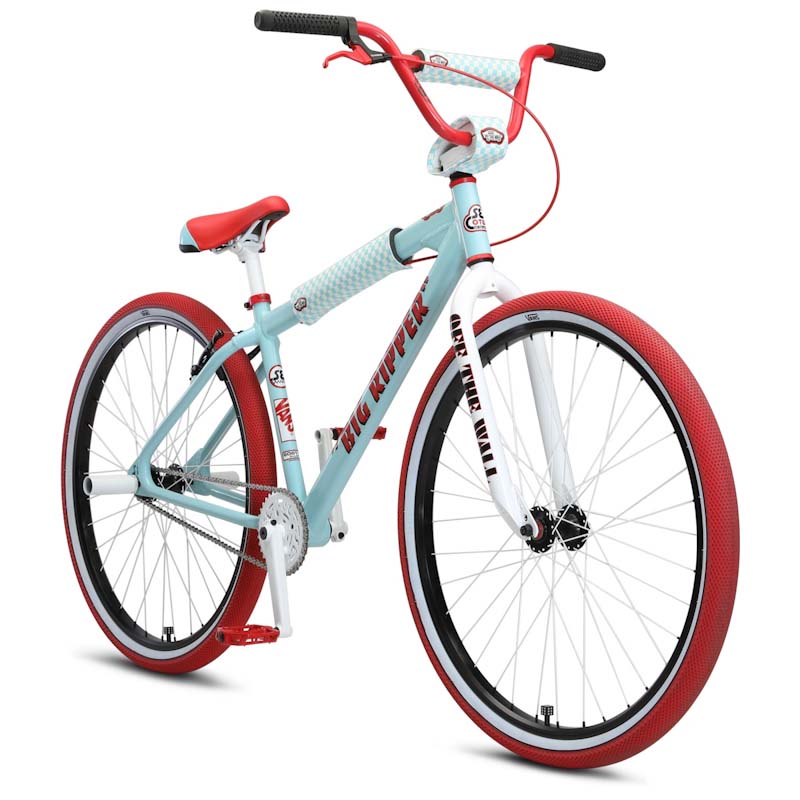 Originally launched in 2009, the Big Ripper earns its name because of its huge (for BMX) 29” wheels. I guess bigger is better, because SE says this is the best-selling bike in their ‘Bike Life’ lineup. It’s no surprise this model got a Vans limited edition, boasting the waffle sole Vans x Cult tires and grips, a Vans checkerboard padset, dice valve caps, and Landing Gear forks with ‘Off the Wall’ decals.  This bike also gets a Vans x SE Bikes Flyer seat with a built in bottle opener!

The Big Ripper’s frame is made from floval-shaped 6061 aluminum tubing, and uses an American bottom bracket. The 29” rims are double-walled, and the high-flange hubs both have sealed bearings. SE’s Power Wing Cruiser handlebars steer the ship, and their three-piece V-Ridge cranks put your pedal power to the wheels. A set of Wheelie pegs is also included, and the complete Big Ripper weighs in at 32 lbs.

Like they did for the Blocks Flyer, Vans is offering Big Ripper shoes with reflective checkerboard details and unique sidewall art to match the bike. The Vans Big Ripper sells for $949.99, and is now available online and through select SE dealers.

no Arayas or Suzie hubs, so close!

Does any one else know where to find one for cheaper.

When it comes to certain things brand new vendors have a range to where they can only sale things at no lower then this amount but could sell it for a lot more. But they do have exceptions like costco or usually if the business is going out of business. But that’s how products hold the value and make it exclusive. Unless you find it from a private seller used but it’s been bought and its still new. Other then that not really gonna happen