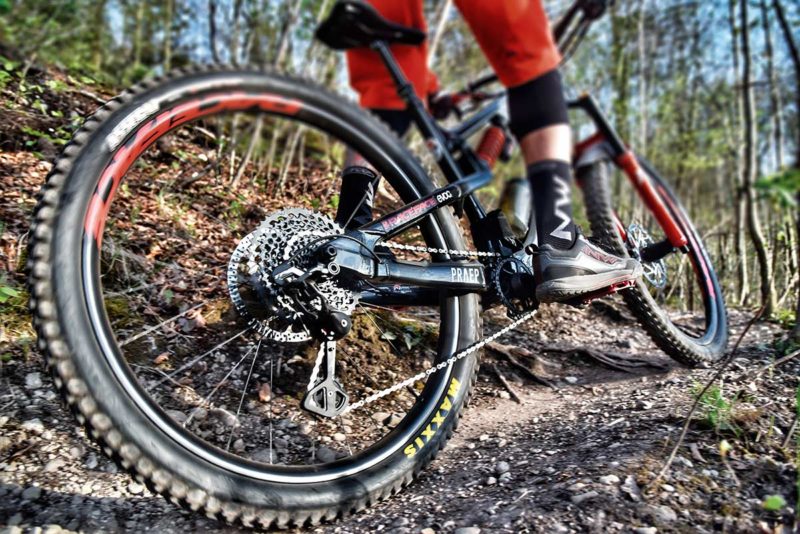 The new TRP TR12 mountain bike derailleur has been a long time coming. It was lurking about at Sea Otter last year in various states of undress. On Aaron Gwin’s bike we saw it almost entirely clad in electrical tape with an e*thirteen TRS+ 9-46 cassette. On another, it was showing a little more mechanism while servicing a Shimano XTR 12-speed 10-51 cassette.

Now, the prototyping and testing is finally over. The TRP TR12 12-speed derailleur has landed. Along with an elegant-looking shifter made to Gwin’s exacting requirements. 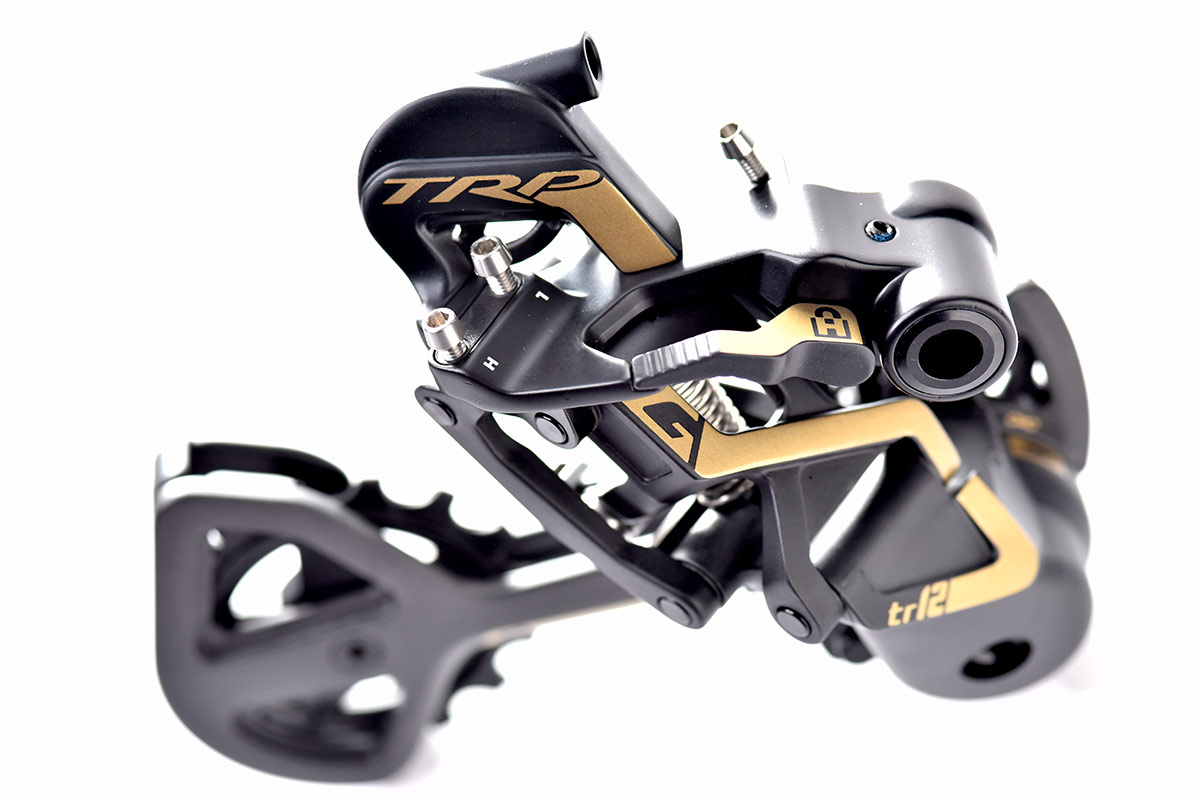 The TR12 has an extra wide parallelogram pivot

Looking for an alternative to the big “S” drivetrain components? TRP are closer than ever to offering a complete drivetrain with their new 12-speed derailleur offering.

Keeping nomenclature simple, TRP have named the new mech the TR12. A 12-speed derailleur for trail riding. Much like their DH7; a 7-speed derailleur for downhill. Actually, the TR12 picks up much of its technology from the DH7, including the ratchet-clutch and Hall Lock. What now? We’ll explain… 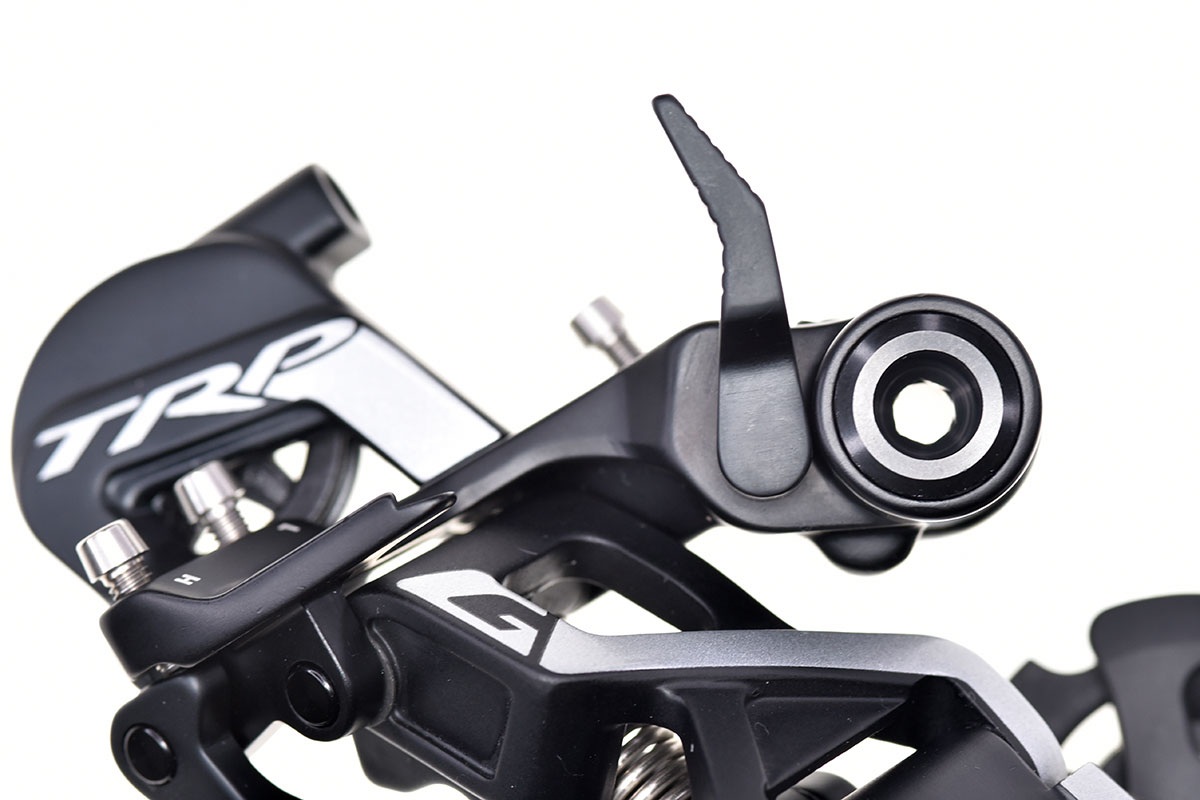 The Hall Lock is an on/off feature with adjustable force. You can set it up to move or not to move.

The TRP TR12 derailleur features a Hall Lock; a lever integrated into the derailleur mount, which locks the movement of the B-knuckle around the mounting bolt when closed. During testing Aaron noticed that normal derailleurs would pivot and move around that bolt and make noise, something he really doesn’t like.

The Hall Lock can be opened to easily remove the rear wheel. When closed, it provides additional stability and less noise and keeps shifting quiet.

It is named the Hall Lock after John Hall, TRP’s head mechanic. “After I have installed the derailleur and get everything adjusted, I tighten the set screw to the point where it stops itself,” says Hall. “I want it to be as tight as it can be, while still being able to operate the Hall Lock lever with my fingers. That seems to be a really good spot. It keeps everything good and tight and the noise down, but when it takes a hit from a rock it doesn’t have so much tension that it can’t move out of the way.” 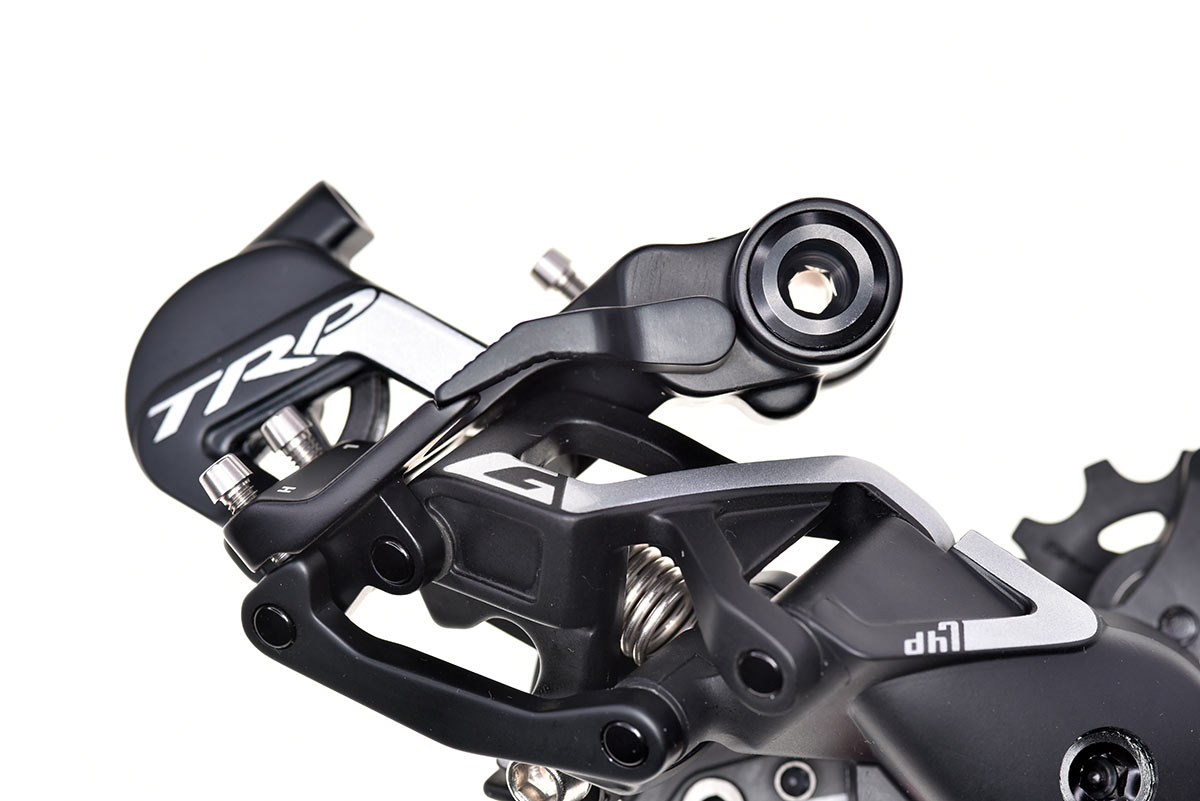 “If you crash or you hit your TR12 derailleur on a rock when riding the Hall Lock is meant to move, even if it’s engaged, in order to prevent catastrophic damage to the derailleur. If this happens, it’s important to take an extra step before you jump back on and ride.”

For all that chat, Hall says he’s never actually hit this derailleur hard enough to push it off the B-plate. “It’s just one of those things to know, in the rare case it does happen, that you don’t want to just shove your derailleur back down without turning the Hall Lock off.” 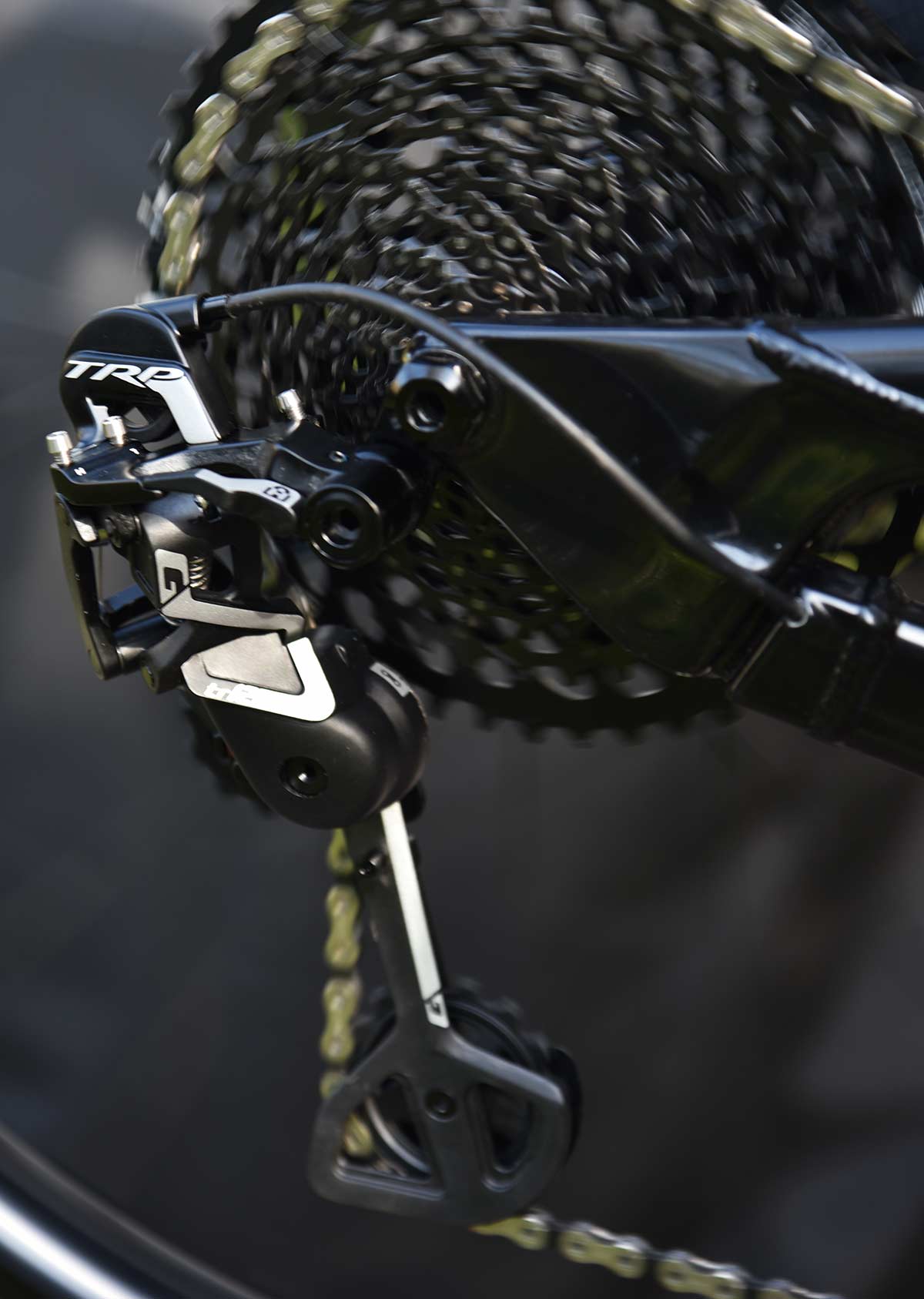 “It prevents your derailleur from lifting, slapping and making a ton of noise” – John Hall, TRP’s Head Mechanic

The TR12’s ratchet-style clutch is adjustable and can be tuned depending on your suspension and riding style. For bikes with a lot of chain growth you can free up the system by decreasing the clutch force. 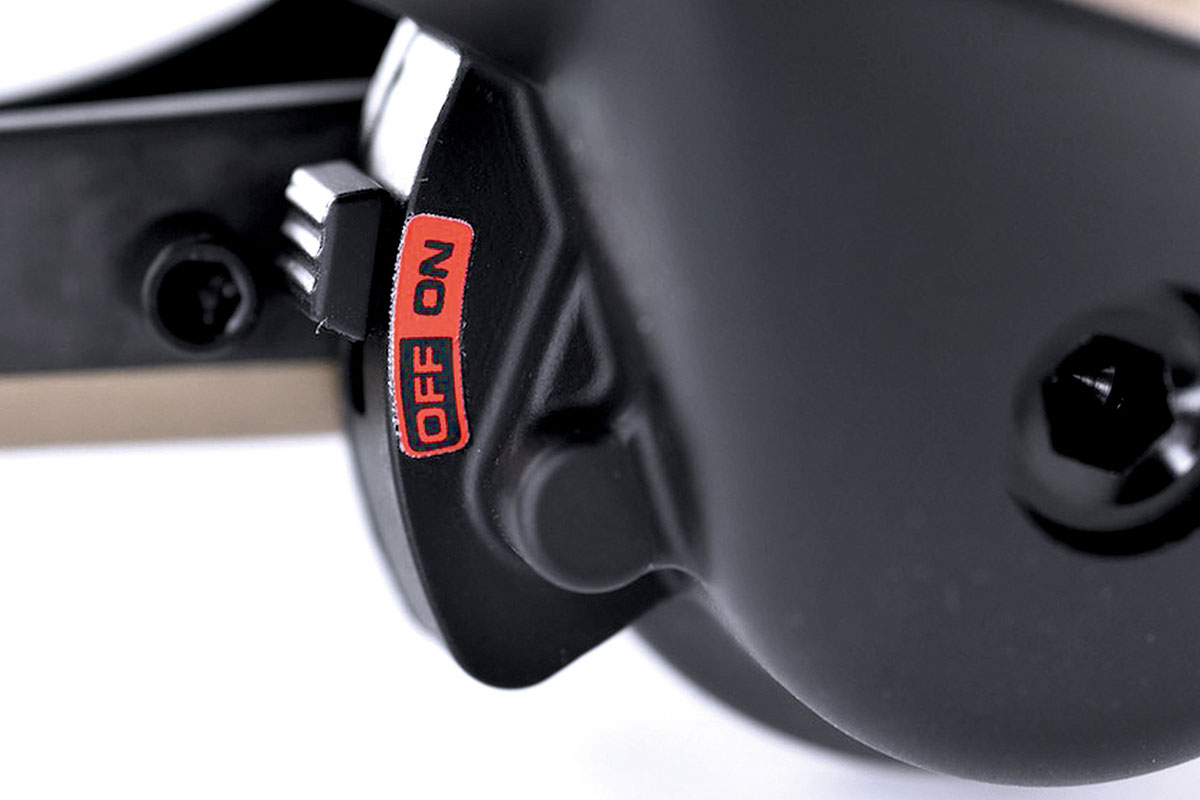 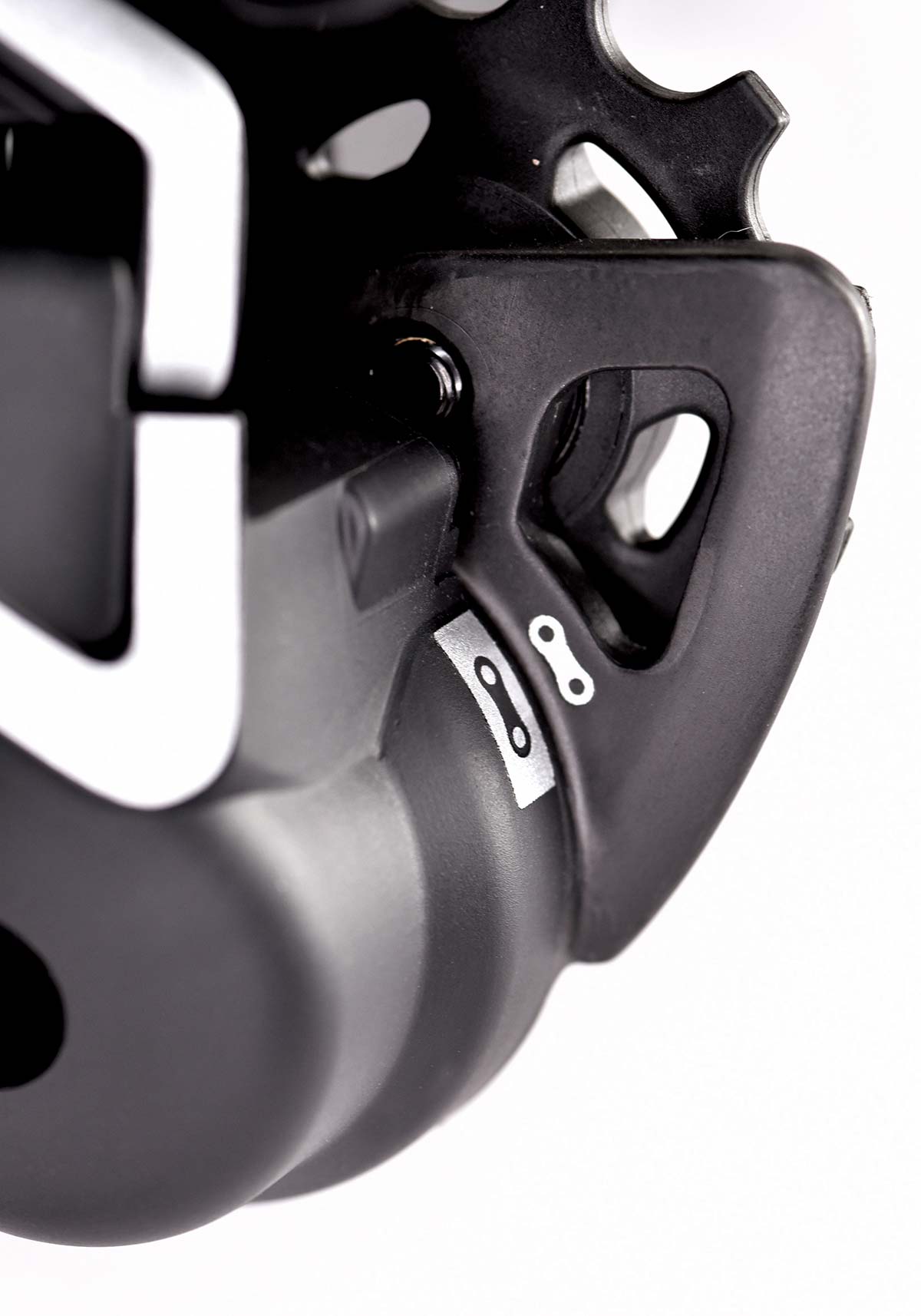 Indicators of chain length are printed on the knuckle and the cage for easy viewing. The marking is there to give a quick and accurate measure of the system’s required chain length during setup. 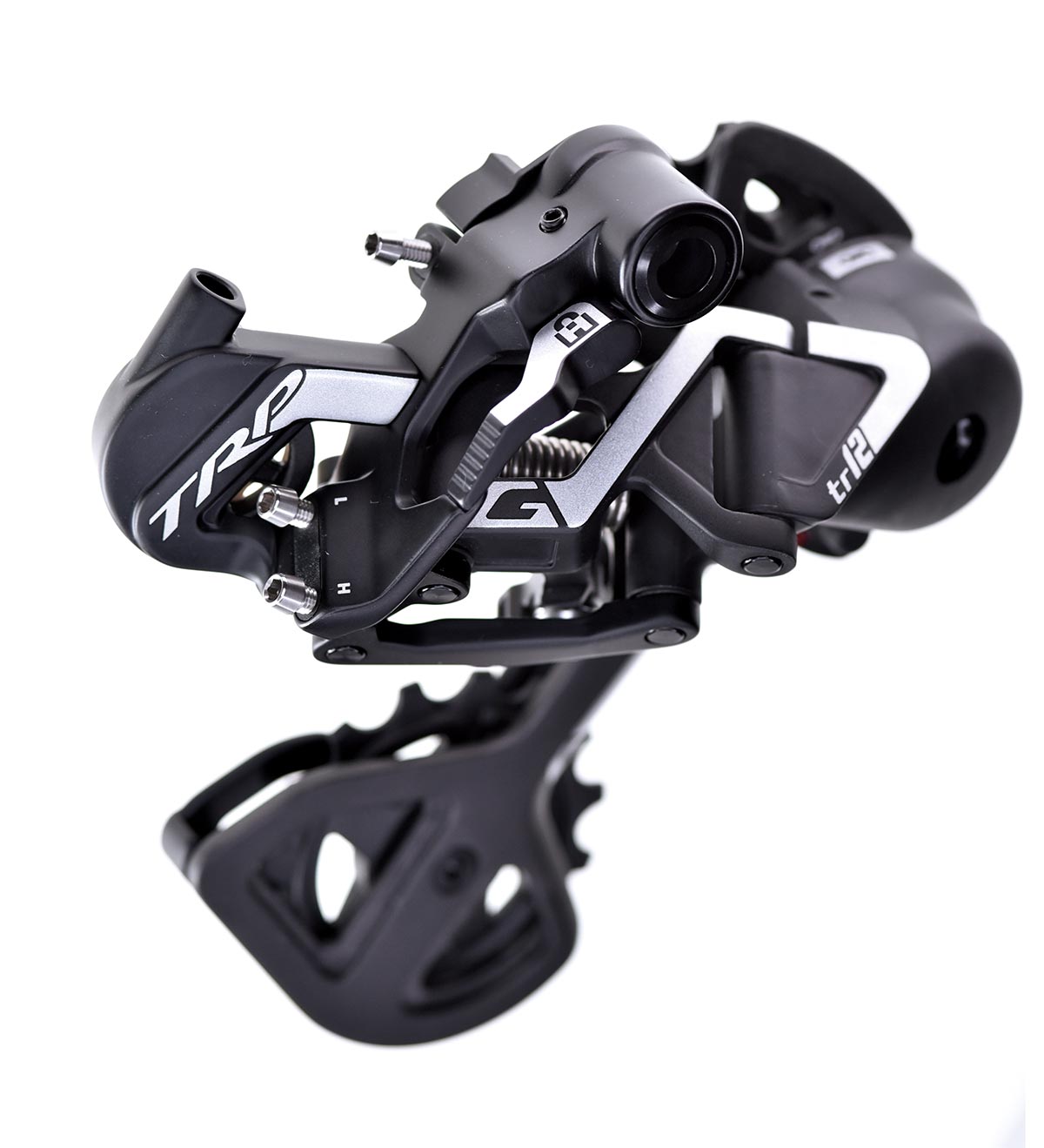 The TRP 12 speed derailleur is designed for use with cassettes with a large sprocket of no more than 50T. It weighs a claimed 282g, composed of forged aluminium and carbon fiber. The guide (upper) pulley is an 11-tooth cog while the tension (lower) pulley is larger at 15t. They each use sealed stainless steel bearings. 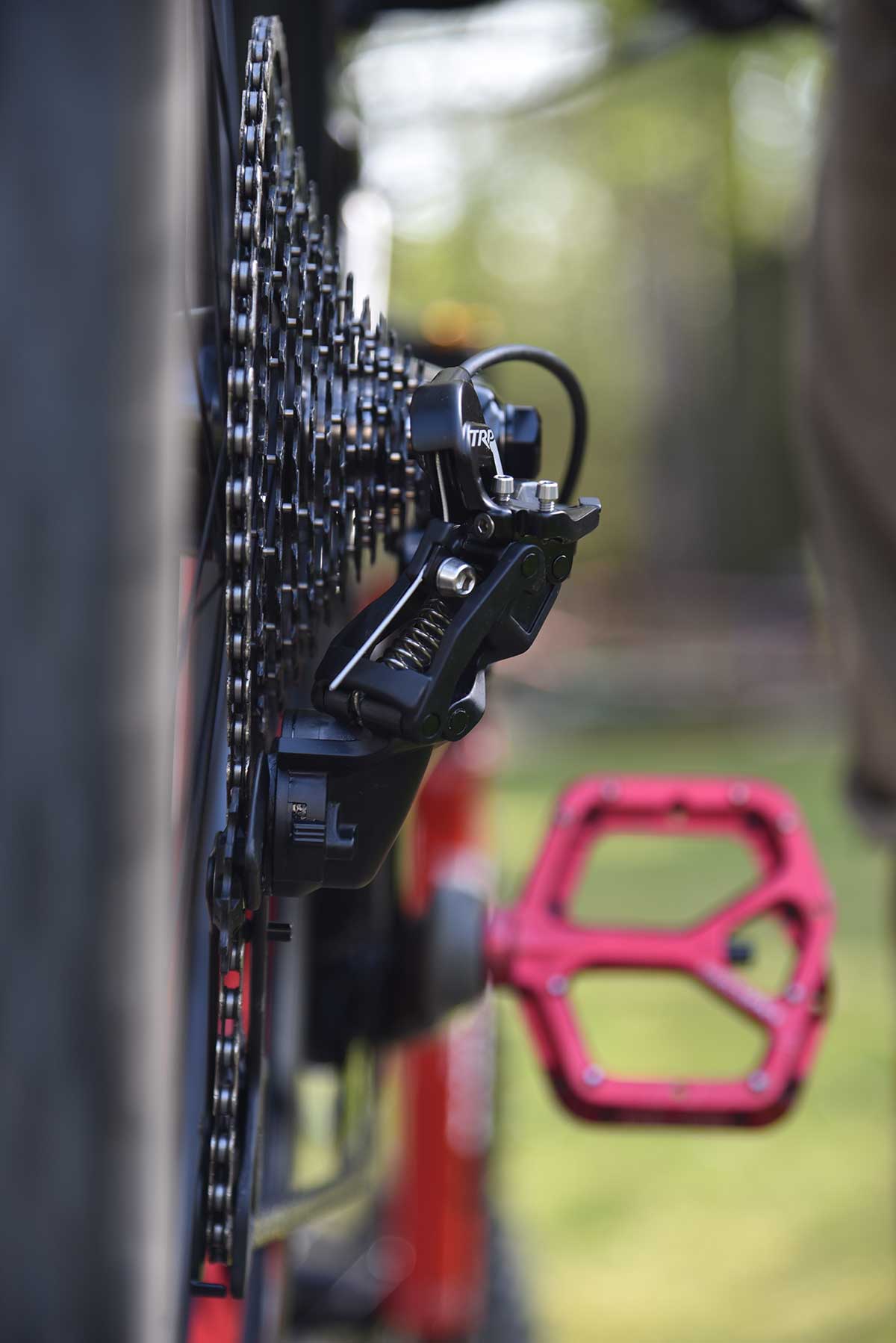 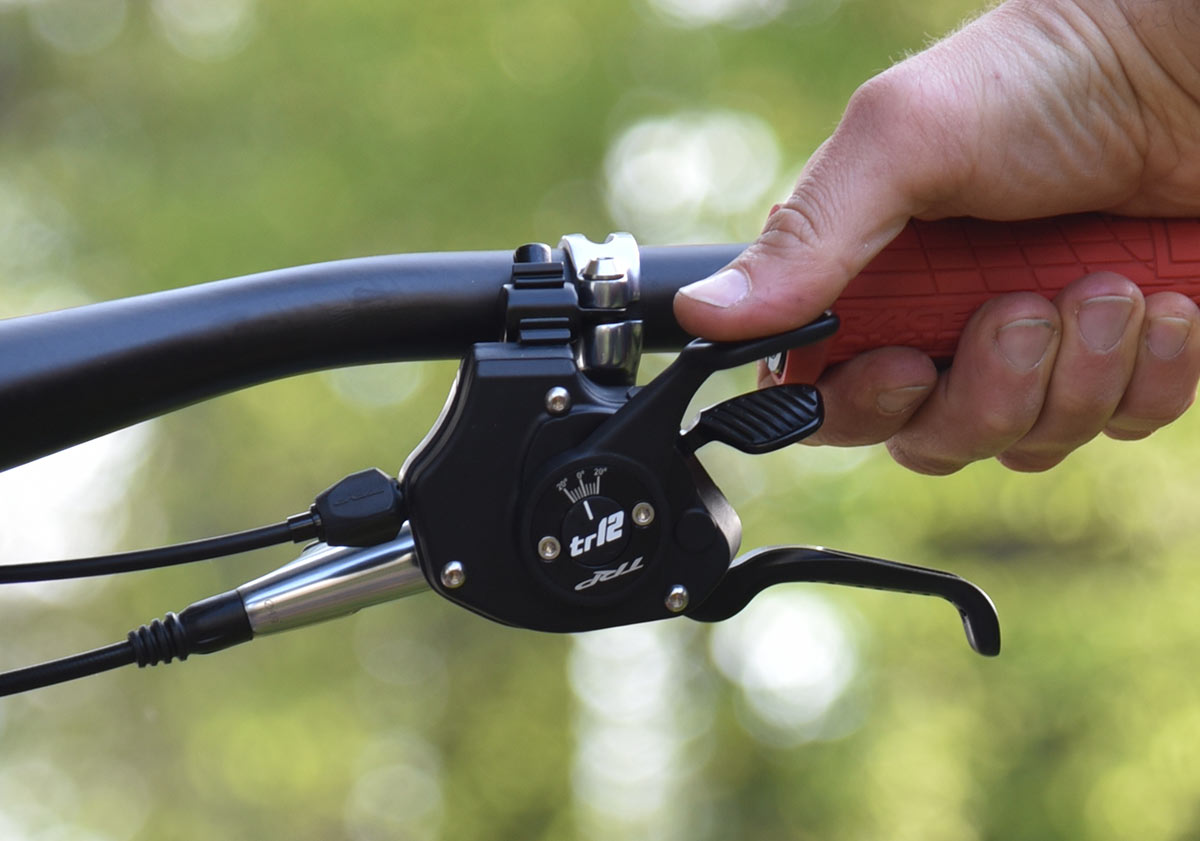 At the handlebar end is TRP’s new TR12 shifter. This was designed chiefly with ergonomics in mind. The end result is a thumb-thumb shifter that works with the natural sweep of the thumb, rather than rotating away from it throughout the sweep. TRP say this unique positioning allows for a more consistent contact patch providing overall better grip and shifting performance when the trail gets rowdy. 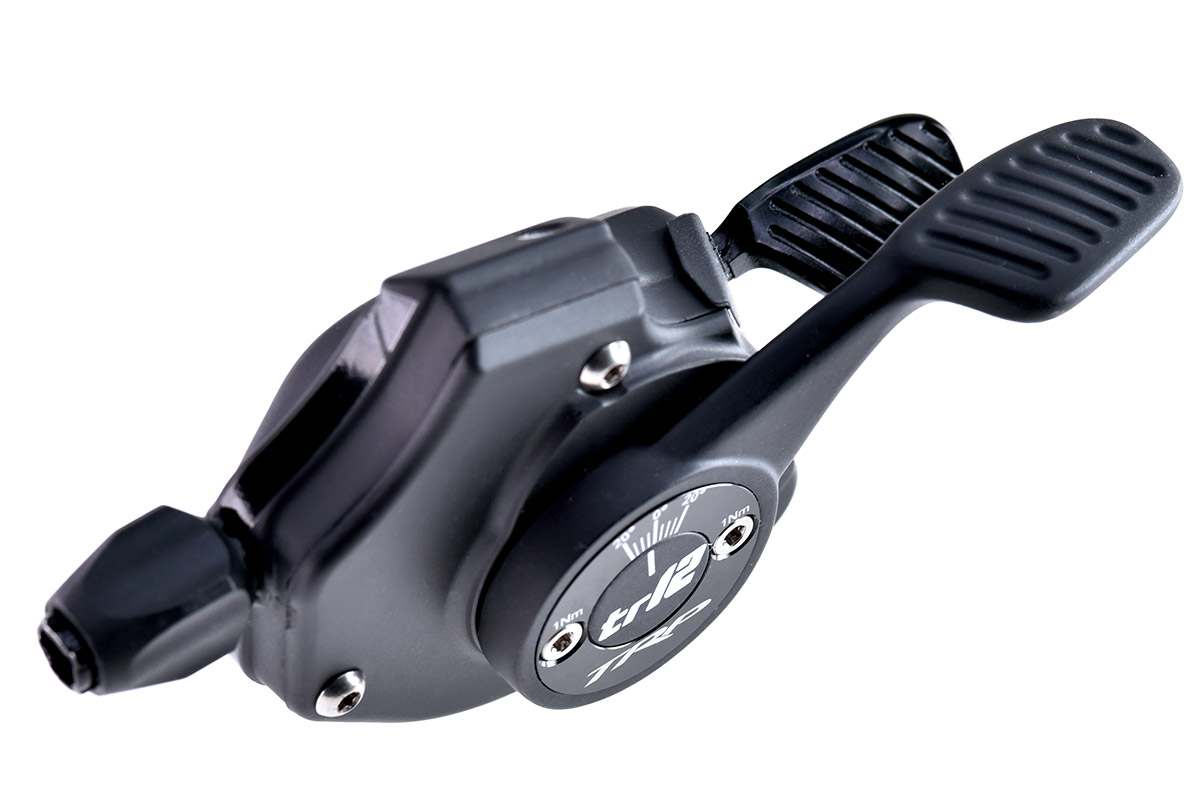 The TRP 12 speed shifter offers a whopping five-cog sweep on the cable release lever. Advance of the lever is adjustable to suit different size hands. The “home” position of the lower lever is also adjustable within a 40-degree range. 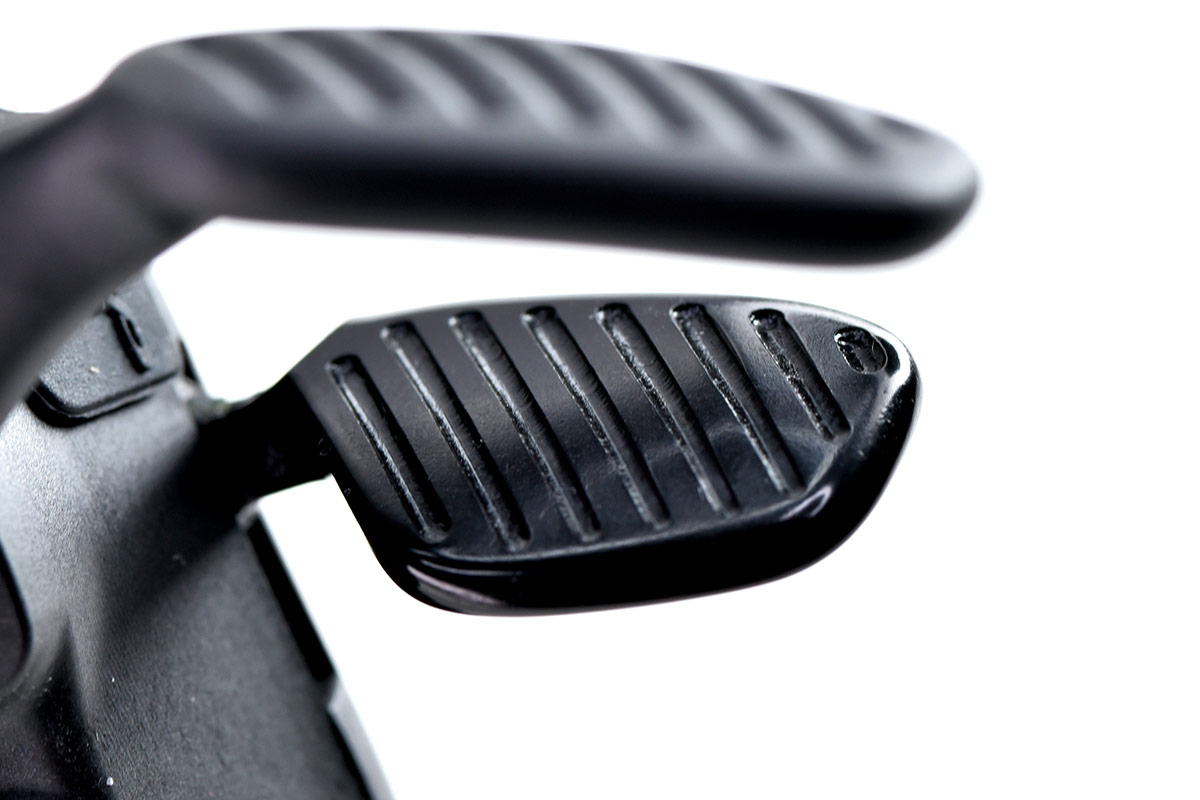 TRP say they have built an enhanced grip and tactile feel into lever paddles of the TRP 12 speed shifter. Embossed grooves on the advance and release lever help provide purchase for your thumb.

The TRP 12 Speed derailleur is available in three colorways; black, gold and silver.

The TRP 12 speed derailleur/shifter kit is available for purchase now with same day global shipping. Get it in black, gold or silver, direct from the TRP website. $329.99 will fetch you the derailleur and shifter in any color combo.

Is there a preferred cassette brand to use with this?

According to another review I read this morning, TRP prefers the SRAM cassettes. The gold color way matches perfectly with the gold XX1 too.

It shouldn’t matter what cassette You use. The difference between Sh and Sr is 0,1mm between the cogs, which makes max. of ~1mm from one side to another, or 0,5mm when setting the chain from the middle.Your deralileur jockeys have more side play than that.

This looks really slick. Would definitely consider for my next MTB build. Stoked on all these smaller brands putting out drivetrains lately

would be great if they are smart and make hydro brifter with same cable pull. Seriously sramano is usper boring with their diffferent road mtb cable pull. (And this XD/XD-R hub madness ?). There is no technical reason to justify incompatibility between road and mtb stuff.

Spot on. I can’t wait to buy a shifter for my Hylexes compatible with this.

hylexes? hylex lever?
i think it only for wireless shifting..
no way it can handle mechanical/hydraulic mechanism.

XD-R hubs identical to XD if you slide the 1.85mm spacer on before the casette

Great news, good for them.

What Antoine Martin said. If they made a version of this for road, they can have my money. All of it. They already have two great mech and hydro styles of brake lever to base their brifters on.

Have they eliminated the huge hole in the shifter casing that the DH version had around the upper lever? Big turn off seeing a potential for mud to get into the delicate bits.

can it be used for XC?

Hope they put out a gravel / trail shifter (& brake) to use with this derailleur.

Let’s see a hyrex drop bar version, that would be so great. Fill the void left by the stunningly odd lack of SRAM 1 x 12 mechanical.

When they bring it down to my budget which is SLX/NX level then I’d gladly buy TRP. I have some of their brakes and they work great.