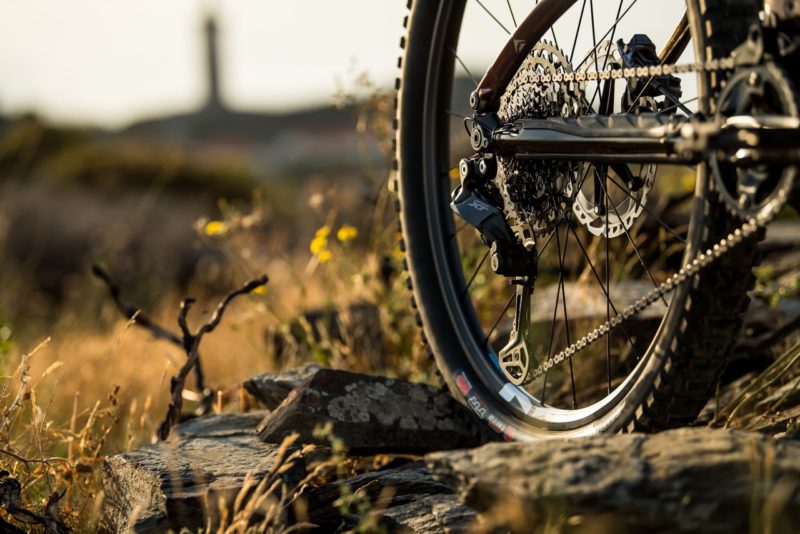 It’s finally time for Shimano to introduce 12-speed Di2 for mountain bikes… just maybe not as you’d expect. The new XT Di2 groups are ebike-only, meaning you’ll have to pair them with one of the new EP6 or EP8 drive units for the group to function properly. That may disappoint some non-e-bikers who have been waiting for an electronic version of Shimano’s 12-speed drivetrains, but on the ebike side, the announcement includes some interesting new tech.

The last time we saw Shimano XT Di2 (first unveiled in 2016), it was 11 speed. There’s still an 11-speed version, but now it’s part of the LinkGlide family. As a refresher, when LinkGlide was introduced, Shimano claimed it resulted in a drivetrain that was 3x more durable. With Deore XT Di2 LinkGlide, you should retain that increased durability, only with the benefits of a modern electronic drivetrain.

Also, while Di2 has not been available for traditional Shimano mountain bike drivetrains since they were 11-speed, Shimano’s e-bike drivetrains have continued to offer a Di2 version which relies on the battery of the e-bike itself for power. That continues here, and possibly why we still aren’t seeing Di2 options for non-e-bikes. 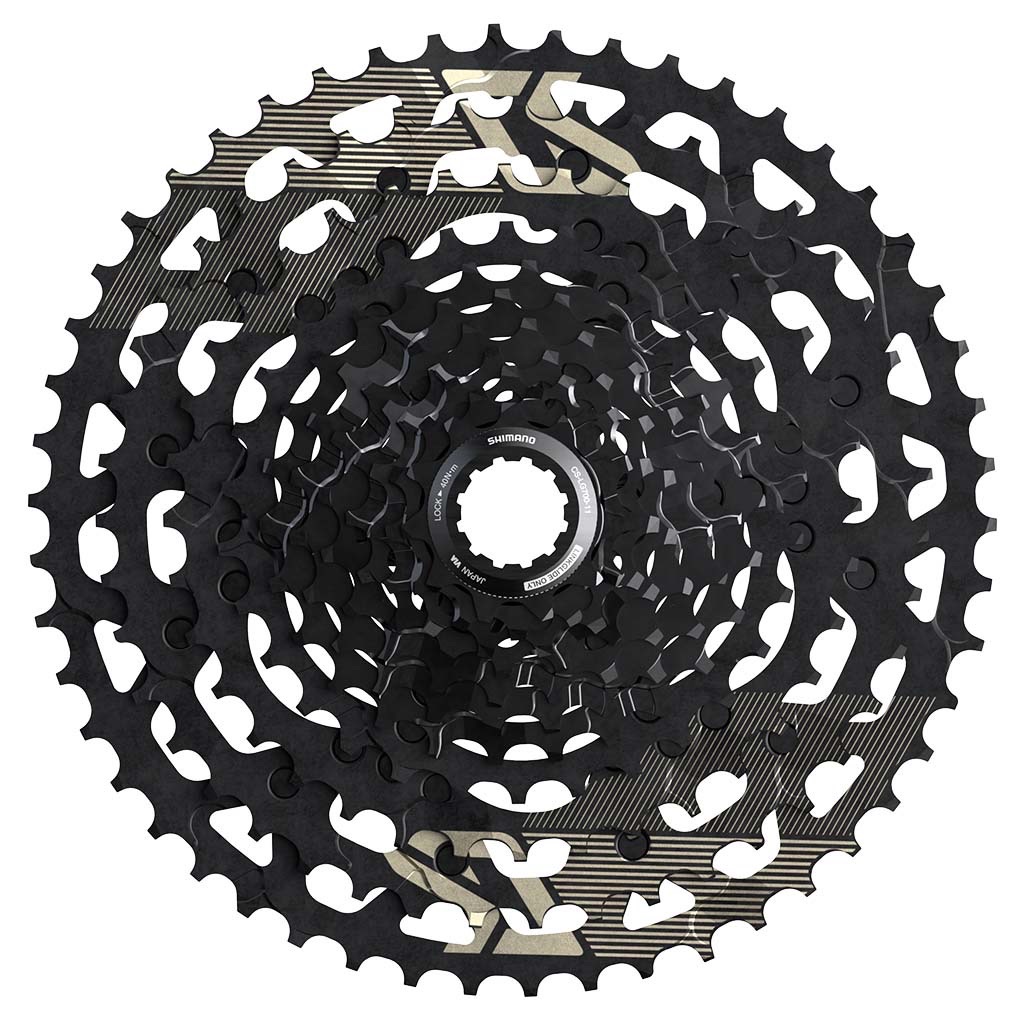 Along with the Di2 addition, Shimano has introduced a new CS-LG700 11-speed cassette for the LinkGlide groups that is a whopping 200g lighter than the previous CS-LG600. 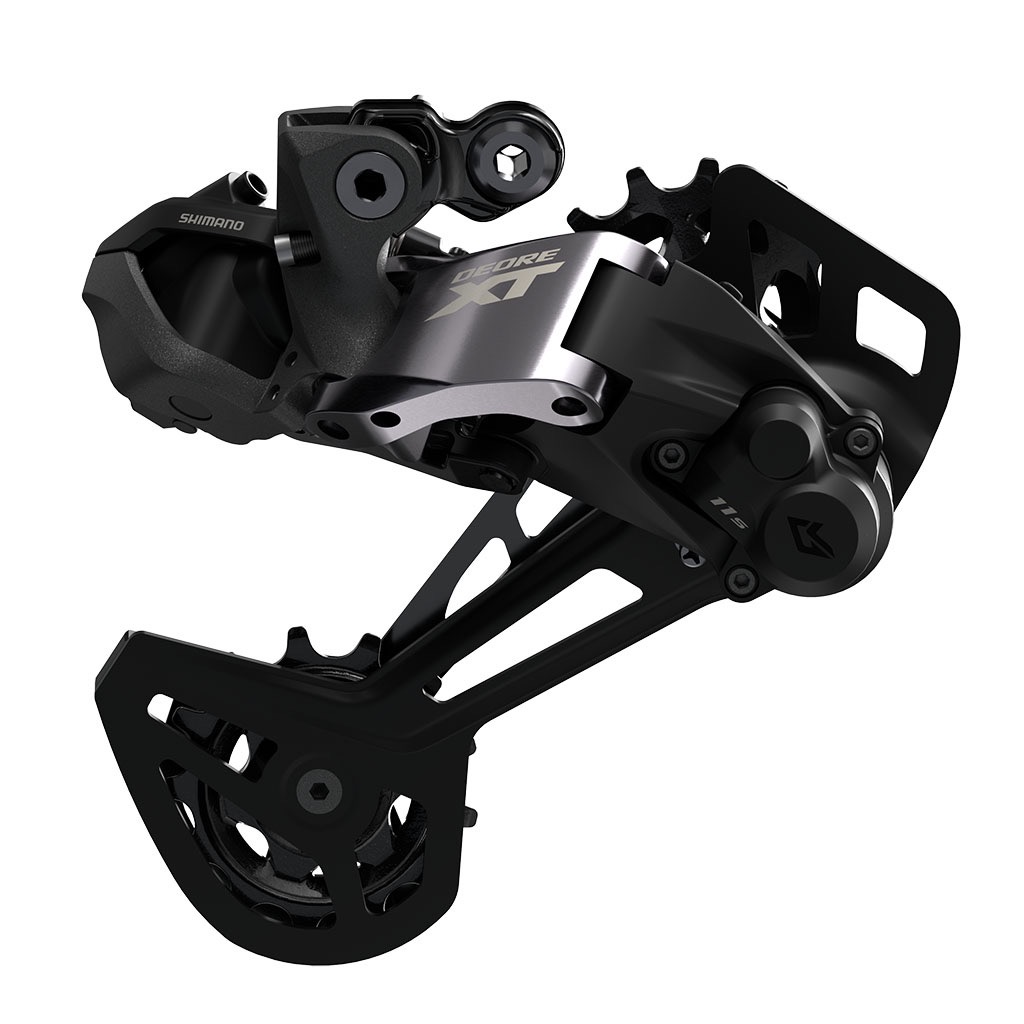 For the most part, the 11-speed LinkGlide and 12-speed Hyperglide+ derailleurs look almost identical. The biggest difference seems to be in the design of the pulleys. 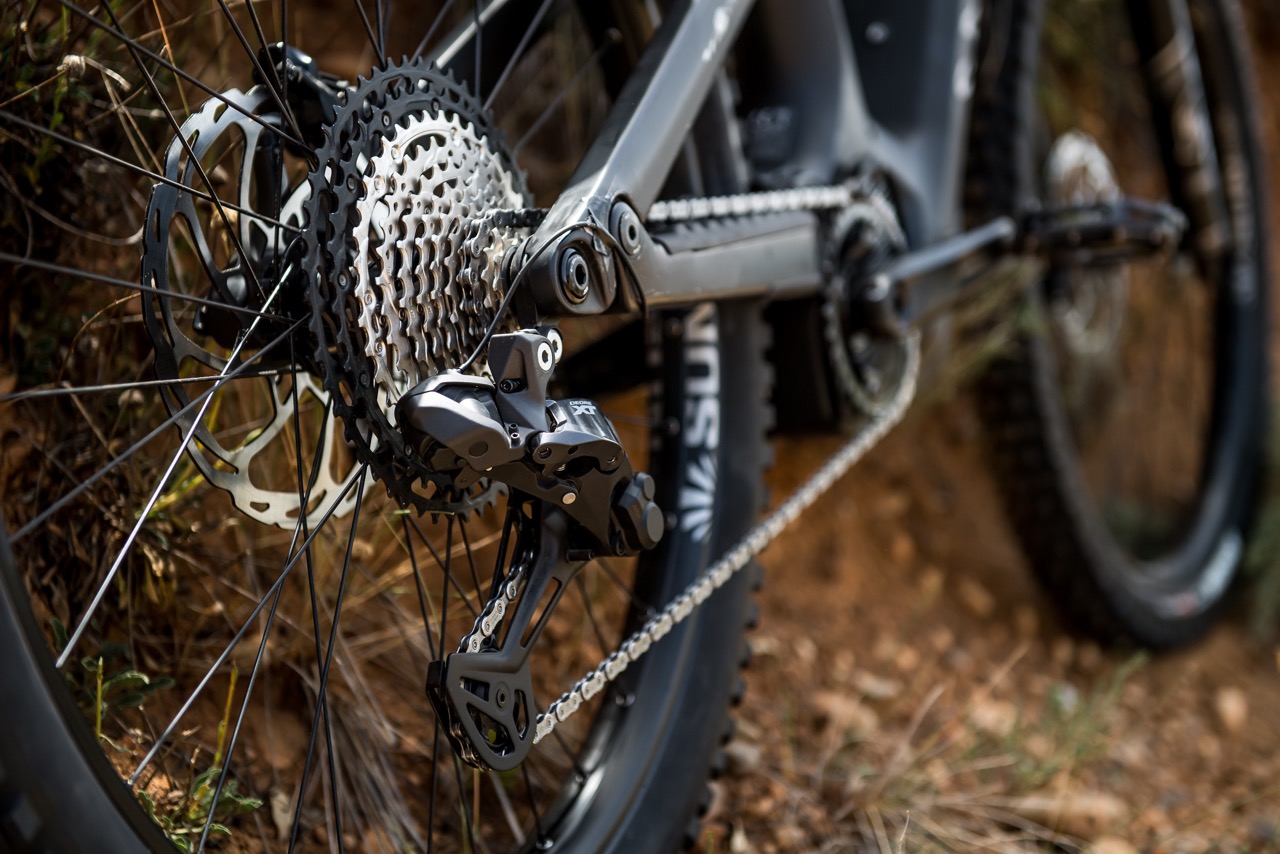 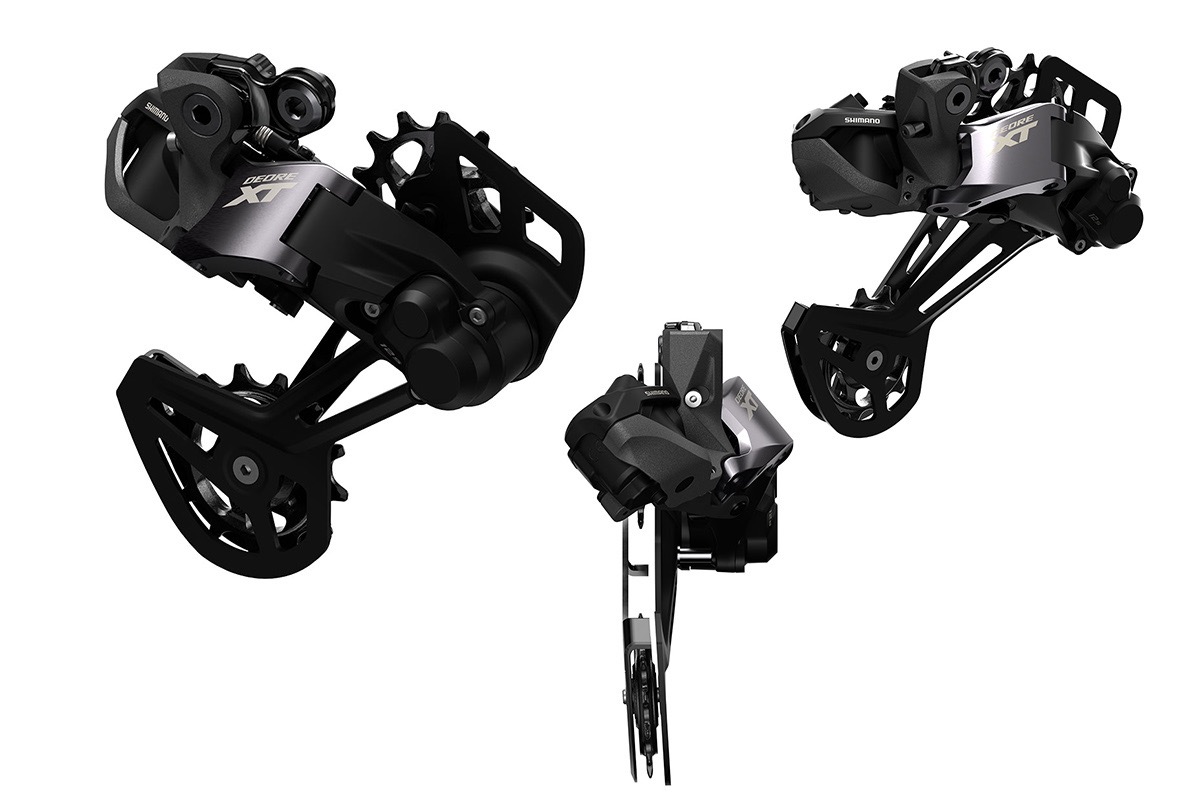 While LinkGlide has the edge on durability, the new 12-speed Deore XT Di2 Hyperglide+ group seems to have the edge on shifting performance. Built to utilize the current group of 12-speed HG 10-51t cassettes and chains, the group has its own dedicated 12-speed rear derailleur with a little 12s printed on the clutch cover. 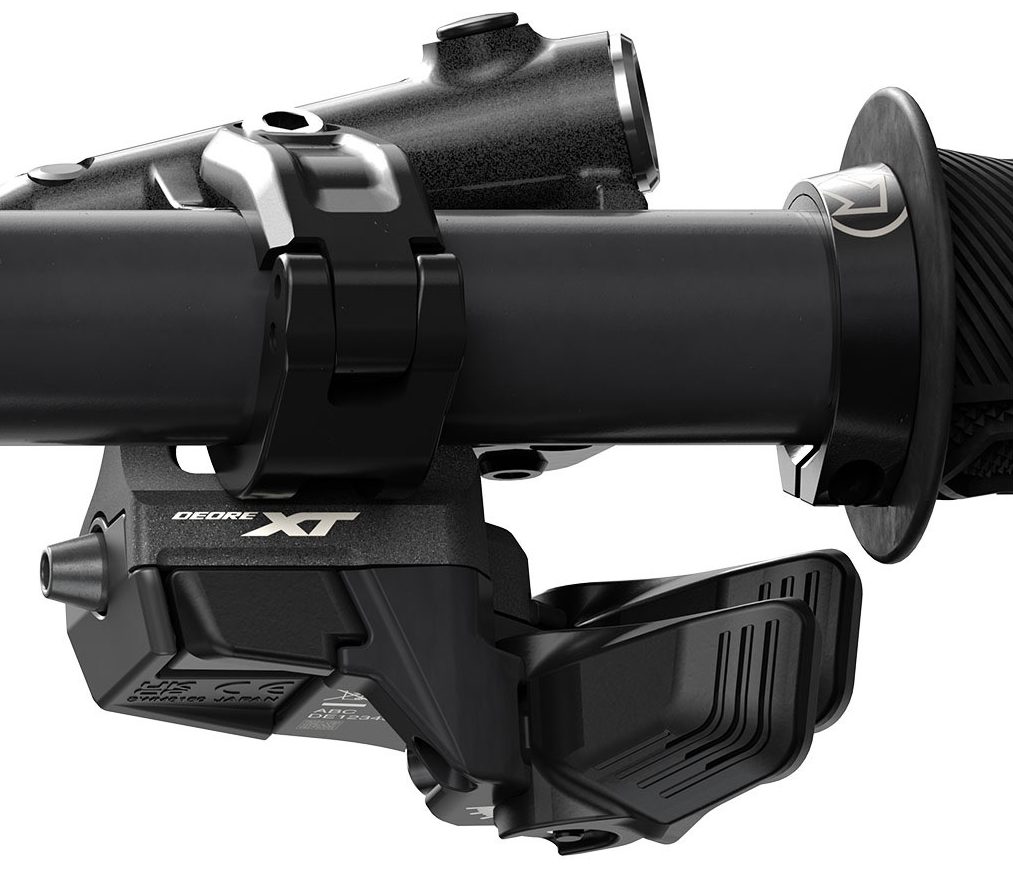 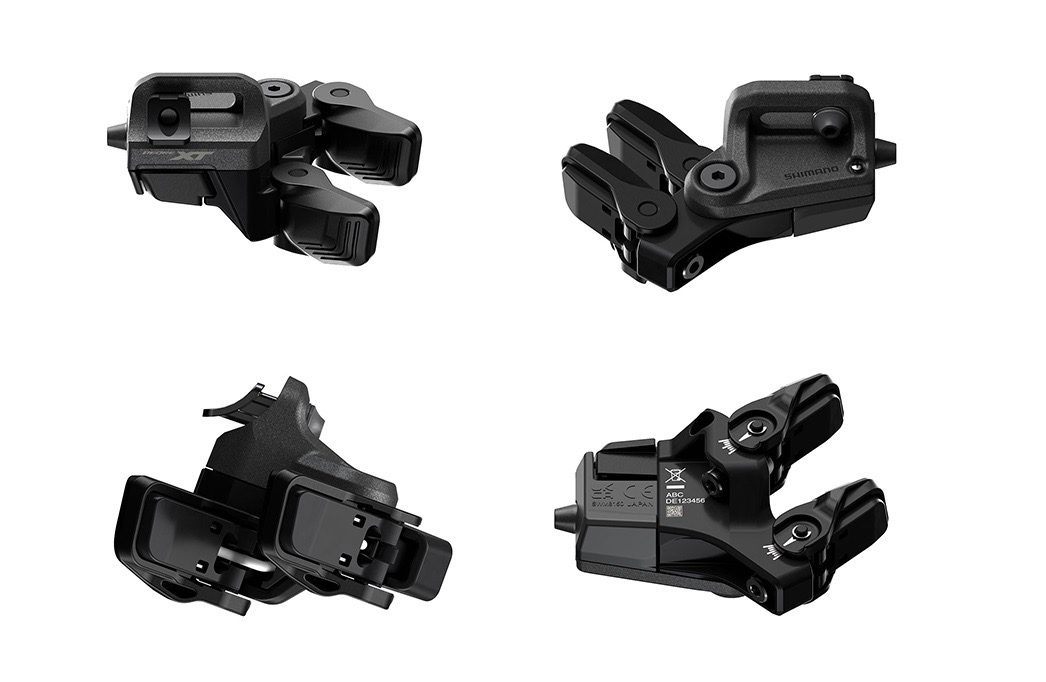 Both the 11-speed and 12-speed groups utilize a new Di2 shifter with an interesting dual-thumb lever setup. We haven’t actually seen how this shifter would work, so currently it’s all speculation based on the photos. Considering availability isn’t scheduled until some time in 2023, it will be a while before we find out for ourselves. 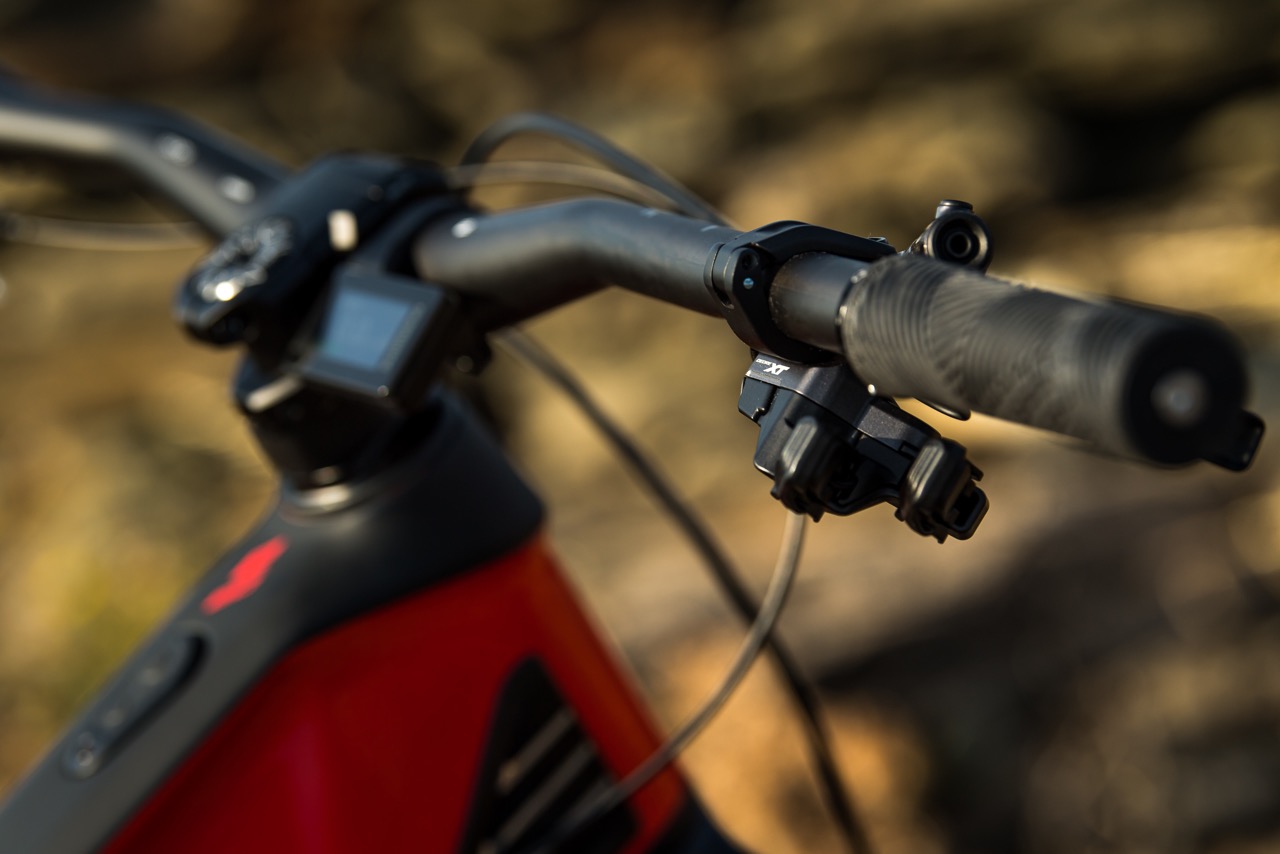 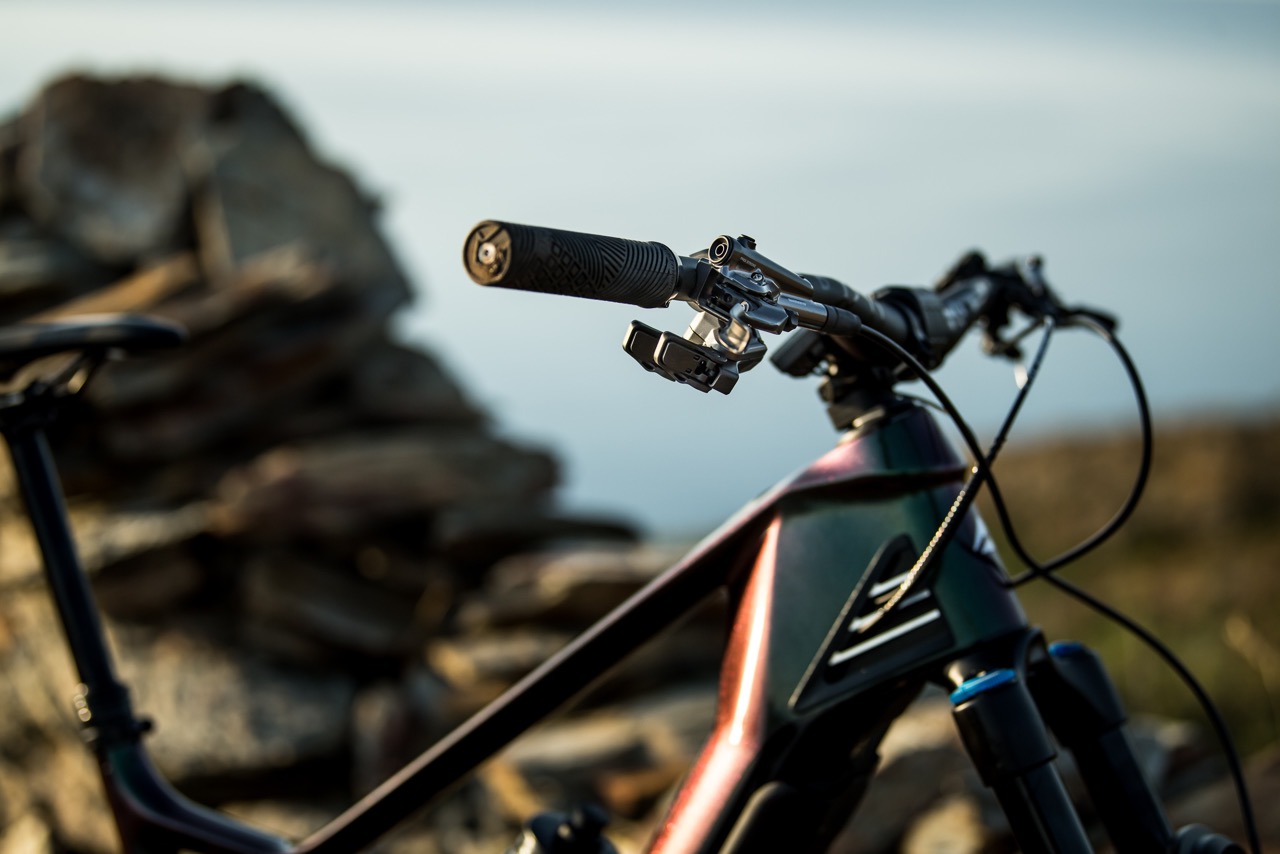 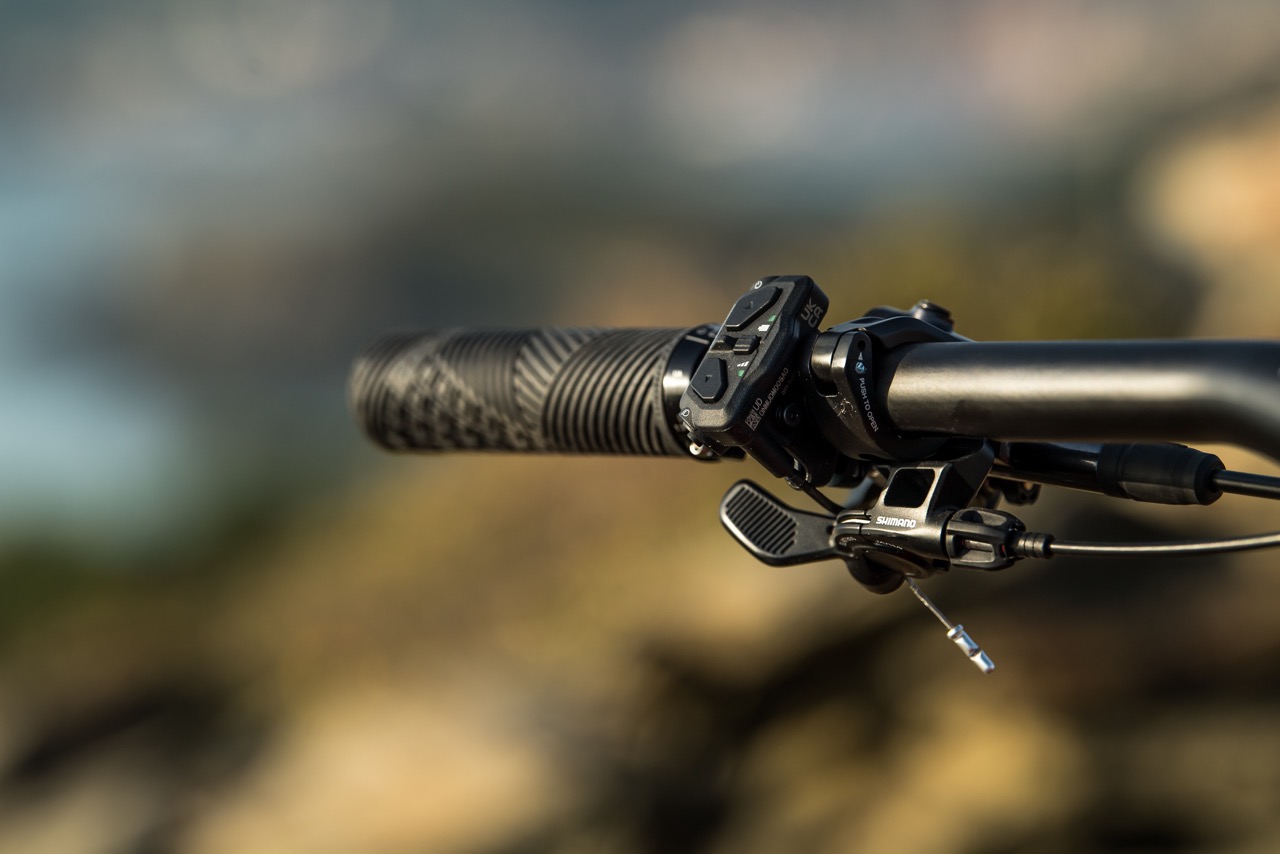 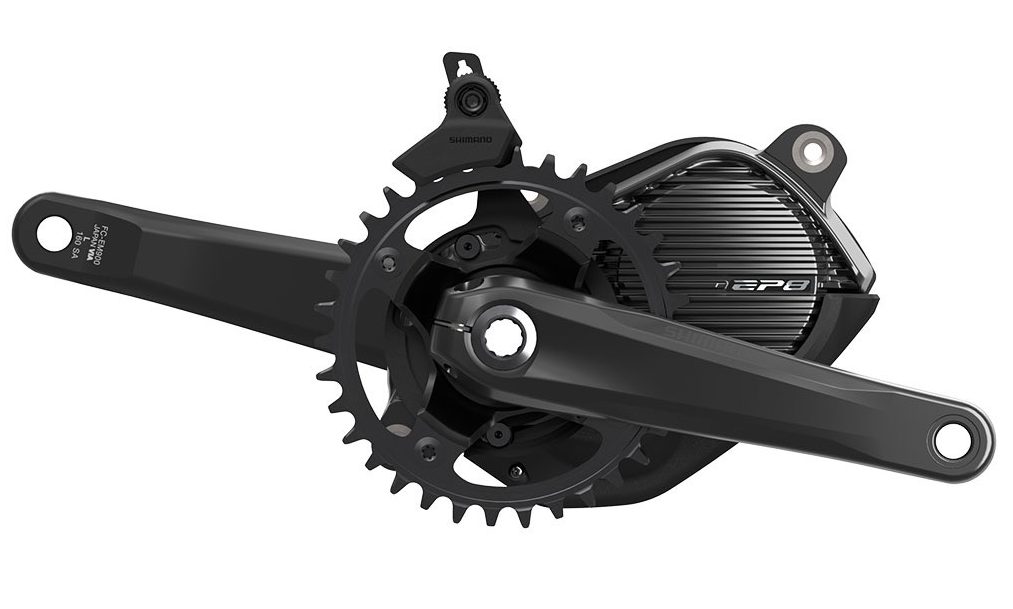 Note that both groups list compatibility as requiring either the new EP600 or EP801 drive units. The EP6 series is all new and meant to bring EP8 performance to a mid-range price point. Mostly the specs are the same as the higher end EP8 drive unit, though the total weight is 300g heavier. 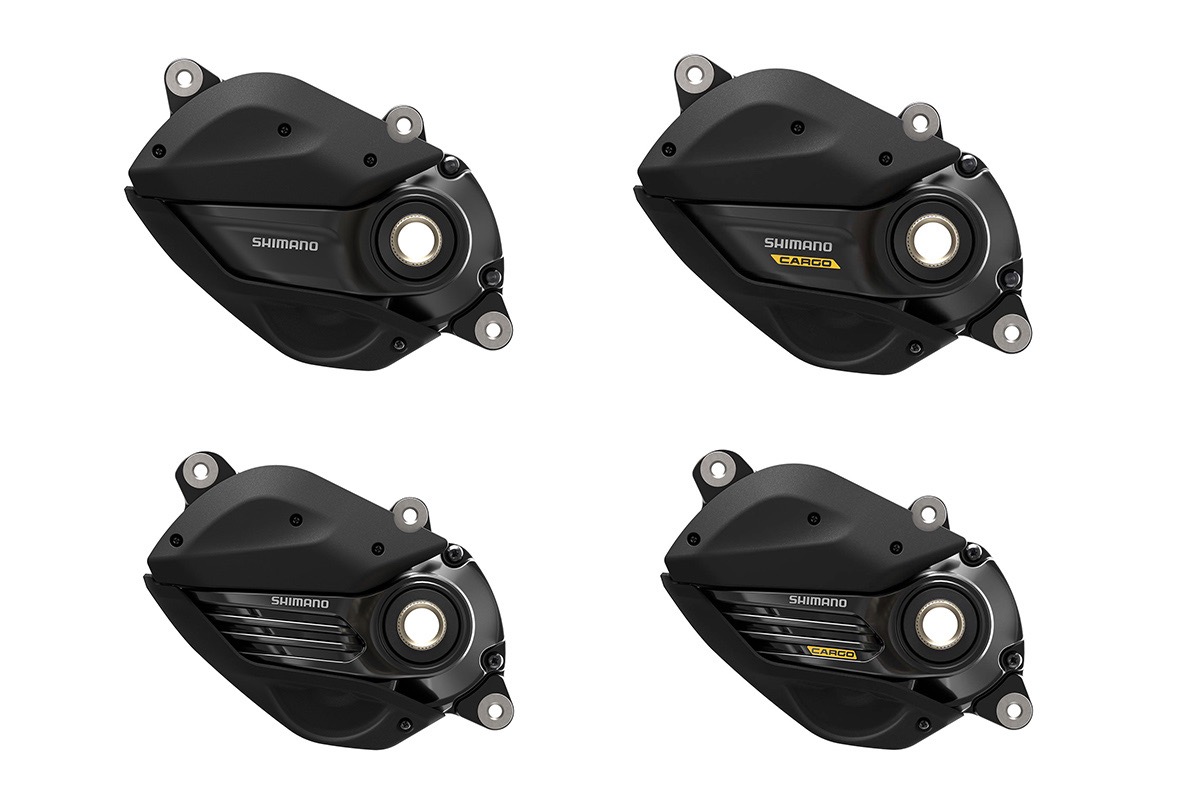 While not completely new, the EP801 has been updated to be compatible with the new shift modes as well as the new ‘Fine Tune mode’ on the E-Tube Project App which will allow you to customize the power profile. Like the EP600, the EP801 receives additional accessory CAN ports to “ensure future-proof compatibility for Shimano EP platforms”. 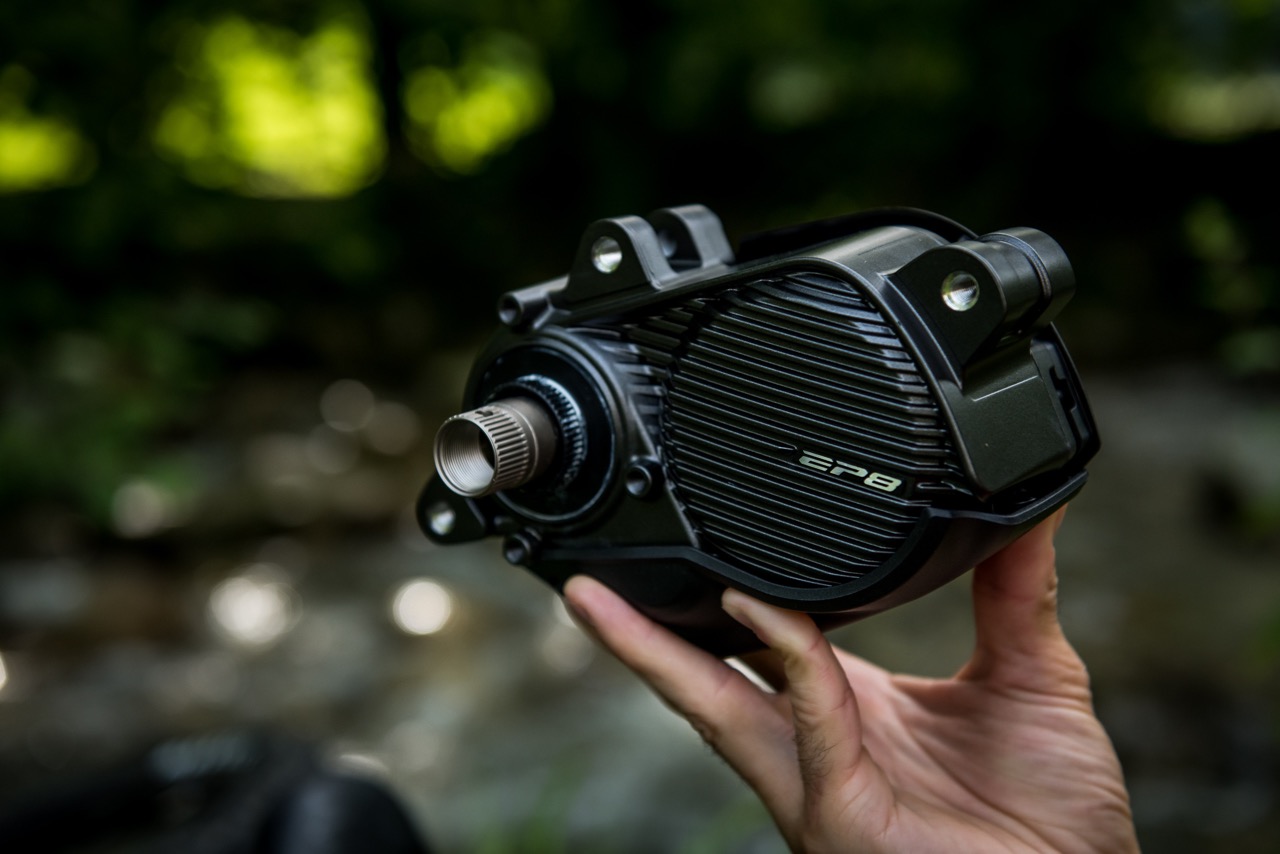 Shift even while Coasting

When you combine the new Deore XT Di2 groups with the new drive units, Shimano’s all-new Free Shift mode unlocks the ability to shift without pedaling. While this isn’t the first system we’ve seen that makes that claim, the Shimano EP platform does in a unique way–that’s all motor. Say you’re coasting down a hill and want to shift into a harder gear  so you’re ready to hammer when it levels out, with Free Shift you simply shift as normal, no pedaling required.

Instead, the derailleur moves the chain to the chosen gear, while the motor spins the chainring without moving the cranks. The freewheel in the crankset makes it all work, allowing the motor to drive the chain and the rear cassette, and you end up with a bike that can shift at any time… and it can even shift for you.

If you’d rather have the bike handle the shifting, the new Auto shift with Manual Override technology will gladly handle it for you. Note that while Free Shift is offered on both the 11-speed LinkGlide and 12-speed Hyperglide+ groups, only the LinkGlide groups will get the full Auto Shift feature. Shimano tells us that the 12-speed groups can still Auto Shift while coasting, but they are unable to Auto Shift while pedaling. For that feature you’ll need the LinkGlide group.

Since all of these components will only work together as a complete system, Shimano will initially not offer them individually – only as a part of a complete e-bike. We’re sure that there will be replacement parts available at some point, but for now individual pricing isn’t available.

If you want an e-bike with the new Di2 system, you’re going to have to wait… until “late-spring or early summer 2023.” However, we’re told that there will be new e-bikes on display at Eurobike with the system, so we’ll at least get a lead on where you can expect to find the systems, next year.

That rear derailleur looks quite simplistic and nice. I don’t know how people do electronic shifting with MTBs. I’d always be wincing at any narrow portion of the trail to each their own though.

11-50 cassette would be great for gravel with a modified GRX derailleur.

I want this with grx shifters

Let’s see Linkglide was announced in 2021 and it is still not available.
Don’t hold your breath.

It’s on Riese and Muller bikes – and it is AWESOME on ebikes. Super smooth shifting, best I’ve felt on mid-drives. That being said, yeah availability is limited, but they are out there.