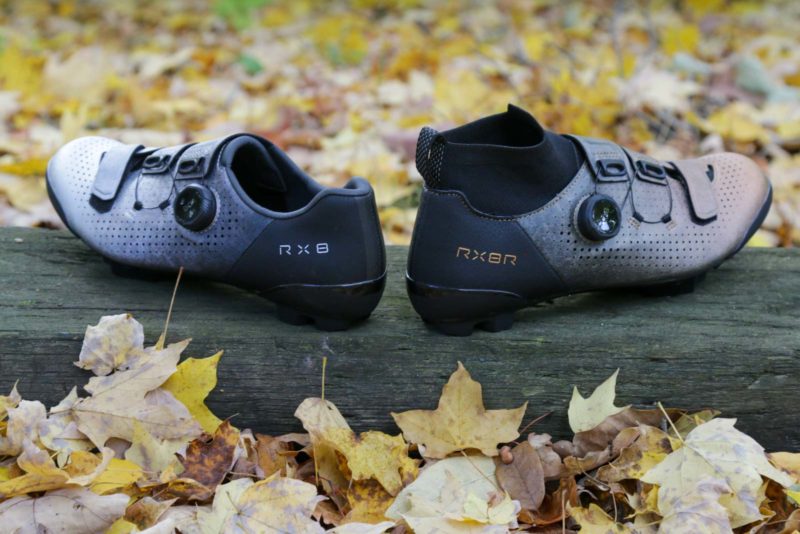 Tired of getting bits of gravel and sand in your shoes when things get a bit loose? So was Shimano Soft-Goods Product Manager, Jessie Gascon. Inspired by a local ride on the Trabuco Creek Trail, the new Shimano RX8 Rally adds a knit ankle cuff to keep debris out of your shoes.

For those wanting a more traditional gravel race shoe, the existing RX8 has been improved with more sizes, a new BOA system, and more. 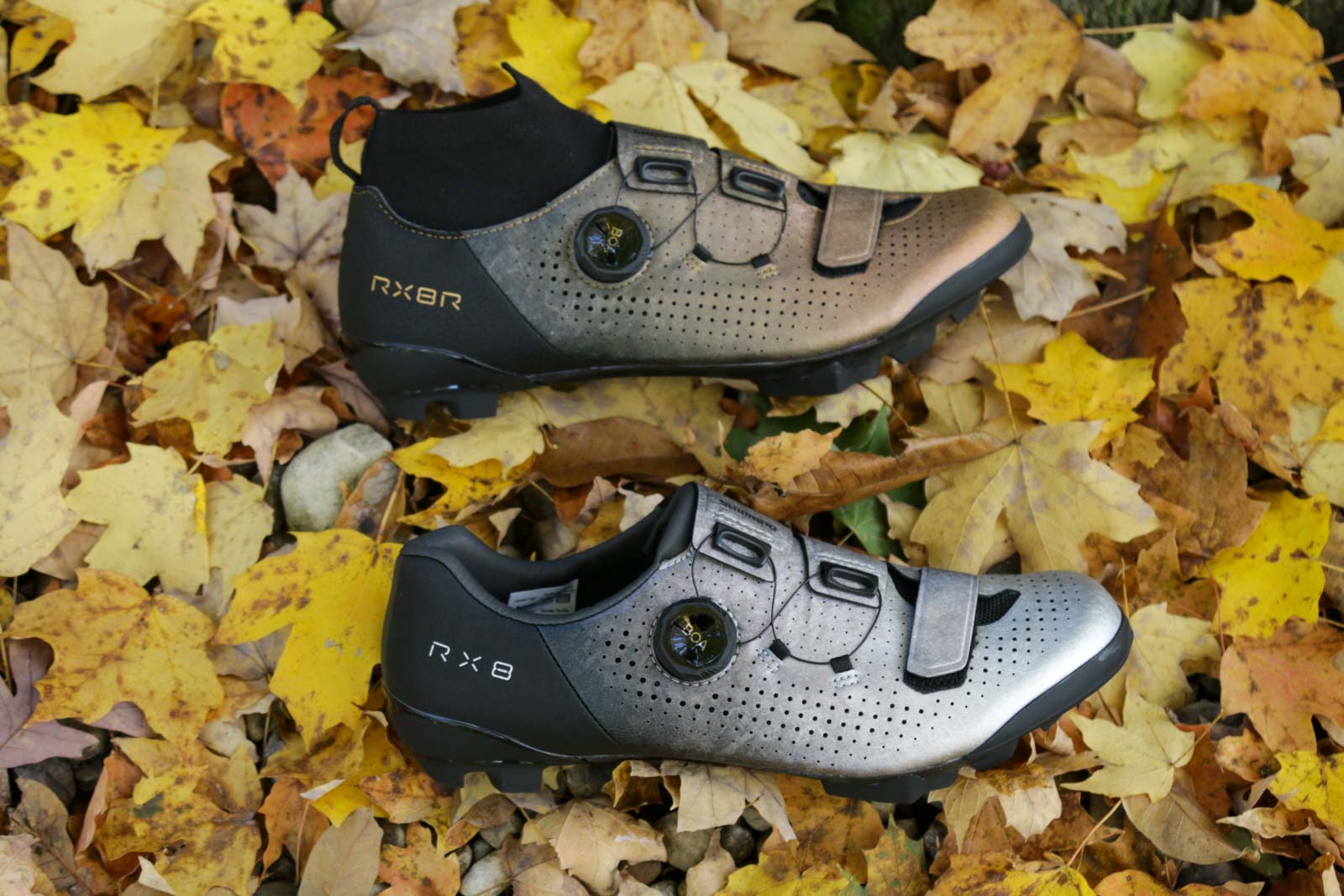 Ankle Protection, or Not

Essentially, the RX801 (RX8) and RX801R are the same shoes, just with the ‘R’ version adding the knit ankle cuff. If you haven’t figured it out already, that ‘R’ stands for Rally. 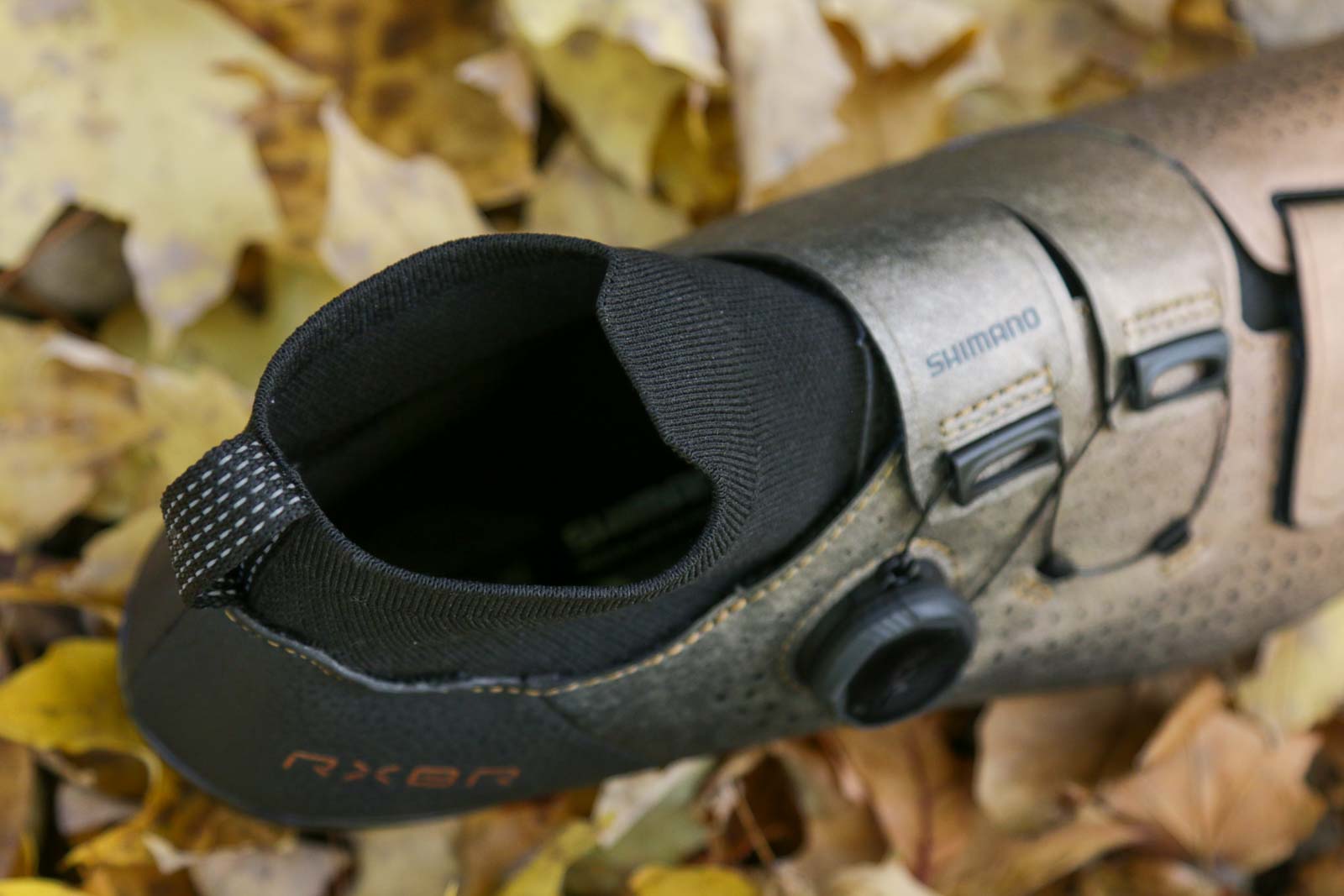 The knit cuff is sewn into the shoe, and has no adjustment – but it’s stretchy enough to slip on and then cinch down over your ankle. There is a pull loop on the back and a small tab on the front to help get them on, though it certainly takes a bit of wiggling to get your foot inside. 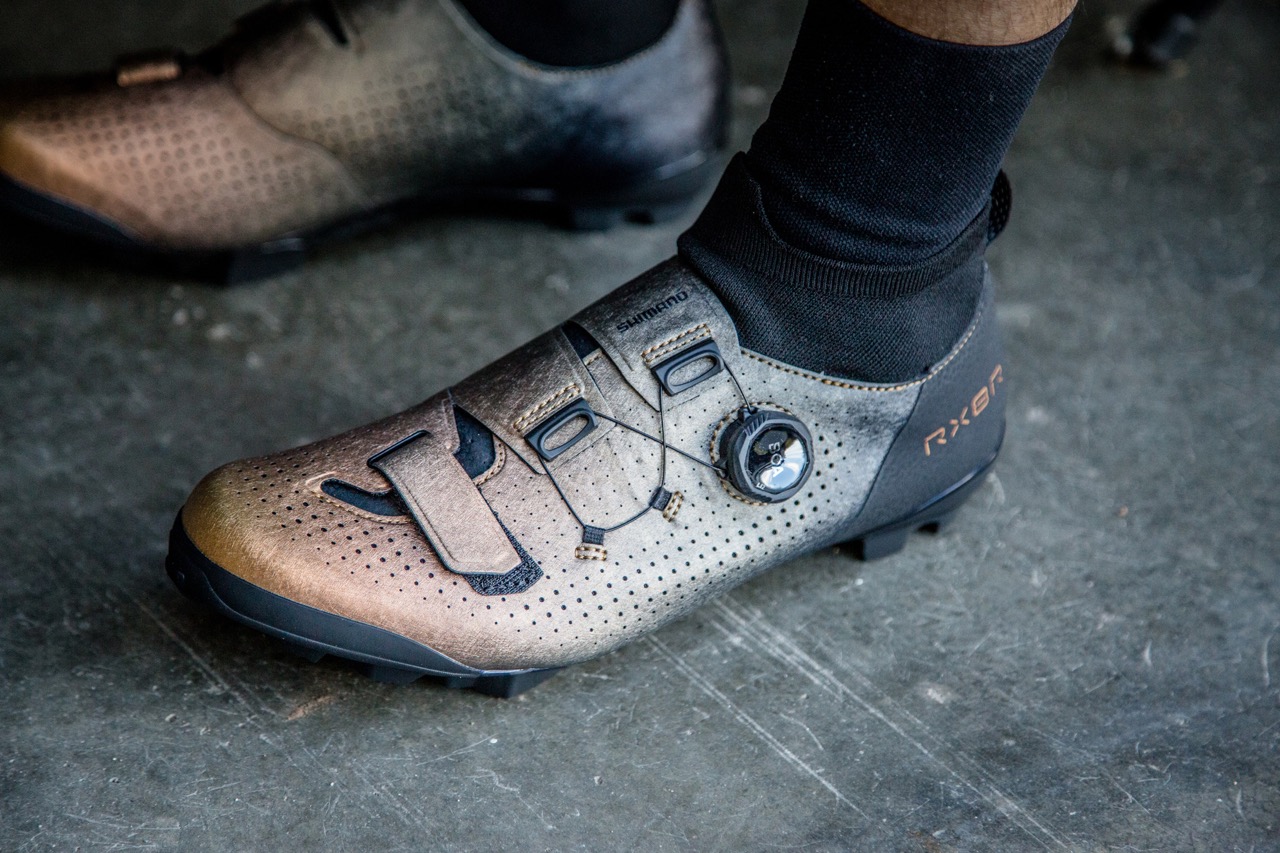 I find the cuff to be fairly tight initially, though I expect it to break in over time.

Both shoes are built on the existing RX8 gravel shoe platform, though with numerous updates. Most of those updates are focused on the upper, which is still made from synthetic leather and includes inkjet printed graphics – from mild with the black version, to wild with the Tropical Leaves edition.

Designed to provide an efficient, lightweight shoe that is race-ready, the shoe features a built-in heel stabilizer and a “surround wrapping upper” construction to provide the best fit. 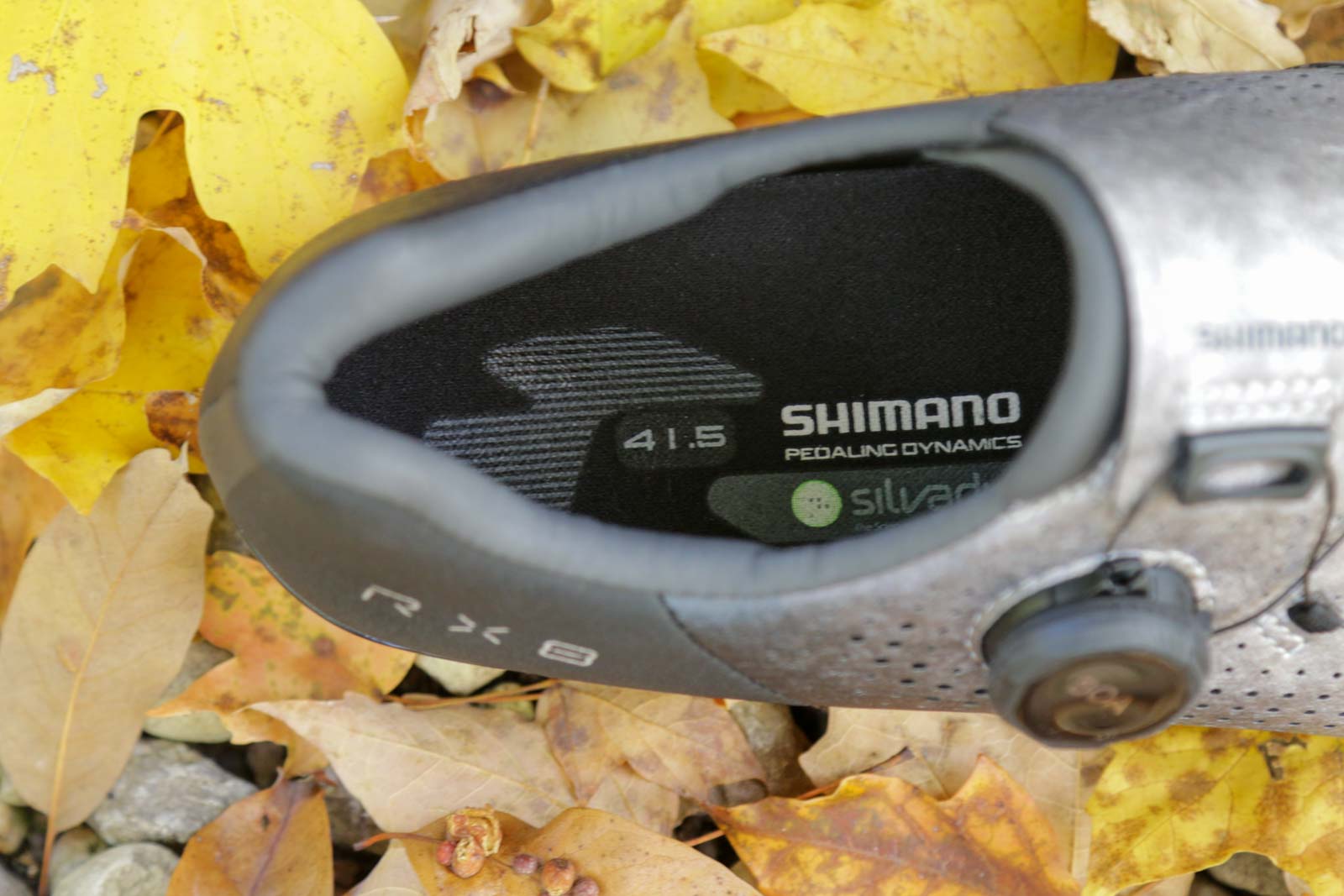 Shimano does call out a “refined toebox,” and for me, it’s hard to tell if it’s the move to a 41.5 from a 42, but the newer model seems tighter in the toebox for me. It seems like the shoe will break in over time like the previous model, which should improve the fit. 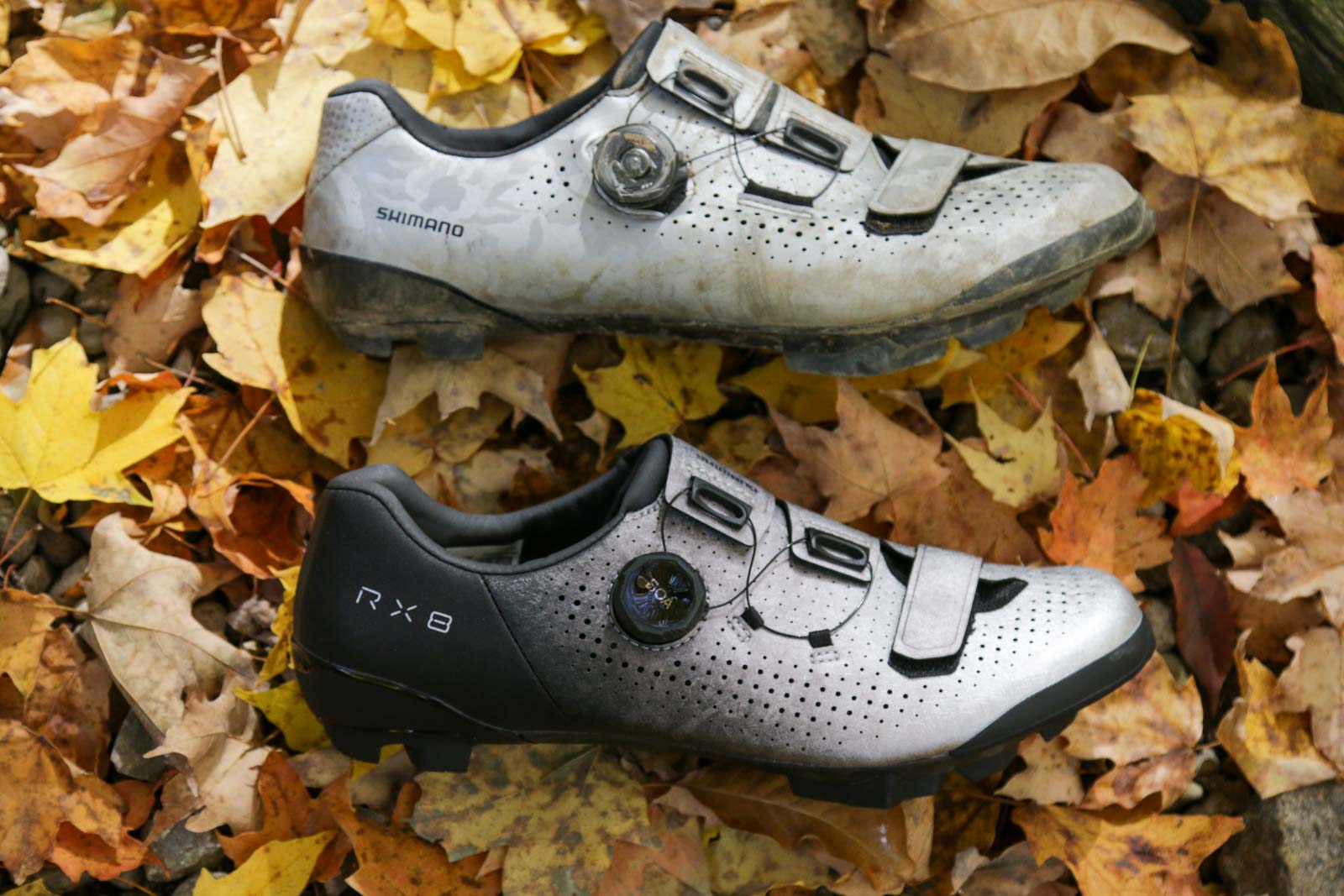 Previous RX8 above, new RX8 in Silver below.

While the new RX8 looks quite similar to the existing model, the changes result in a better shoe overall. The upper now has a split near the heel, which seems to include the addition of a more abrasion-resistant material at the back.

Up front, you’ll find a new low-profile BOA Li2 dial with a rubber grip, and a slightly updated soft lace guide for the bottom loop. The lower profile BOA dial should keep the mechanism more out of harm’s way through technical sections or the occasional crash. 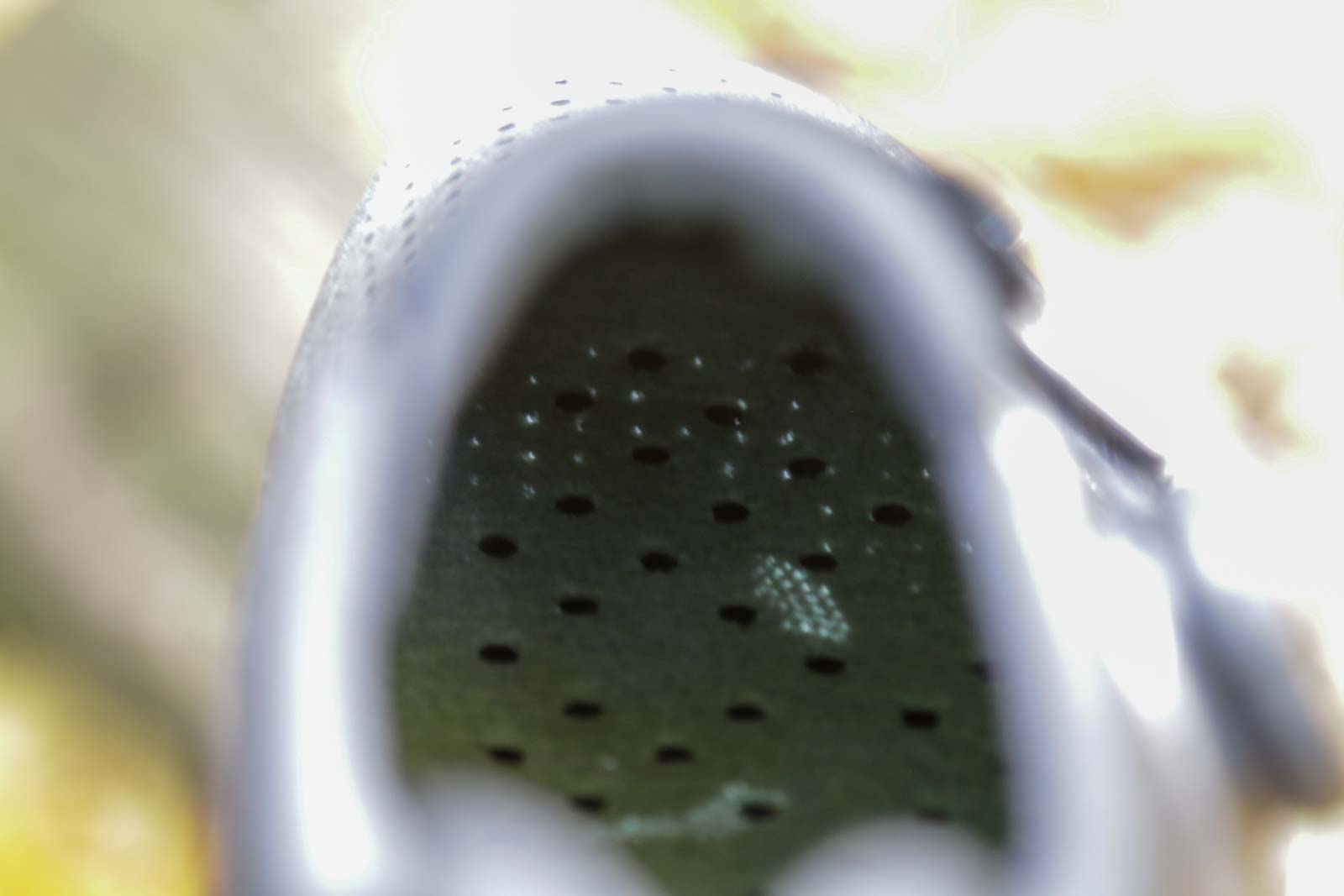 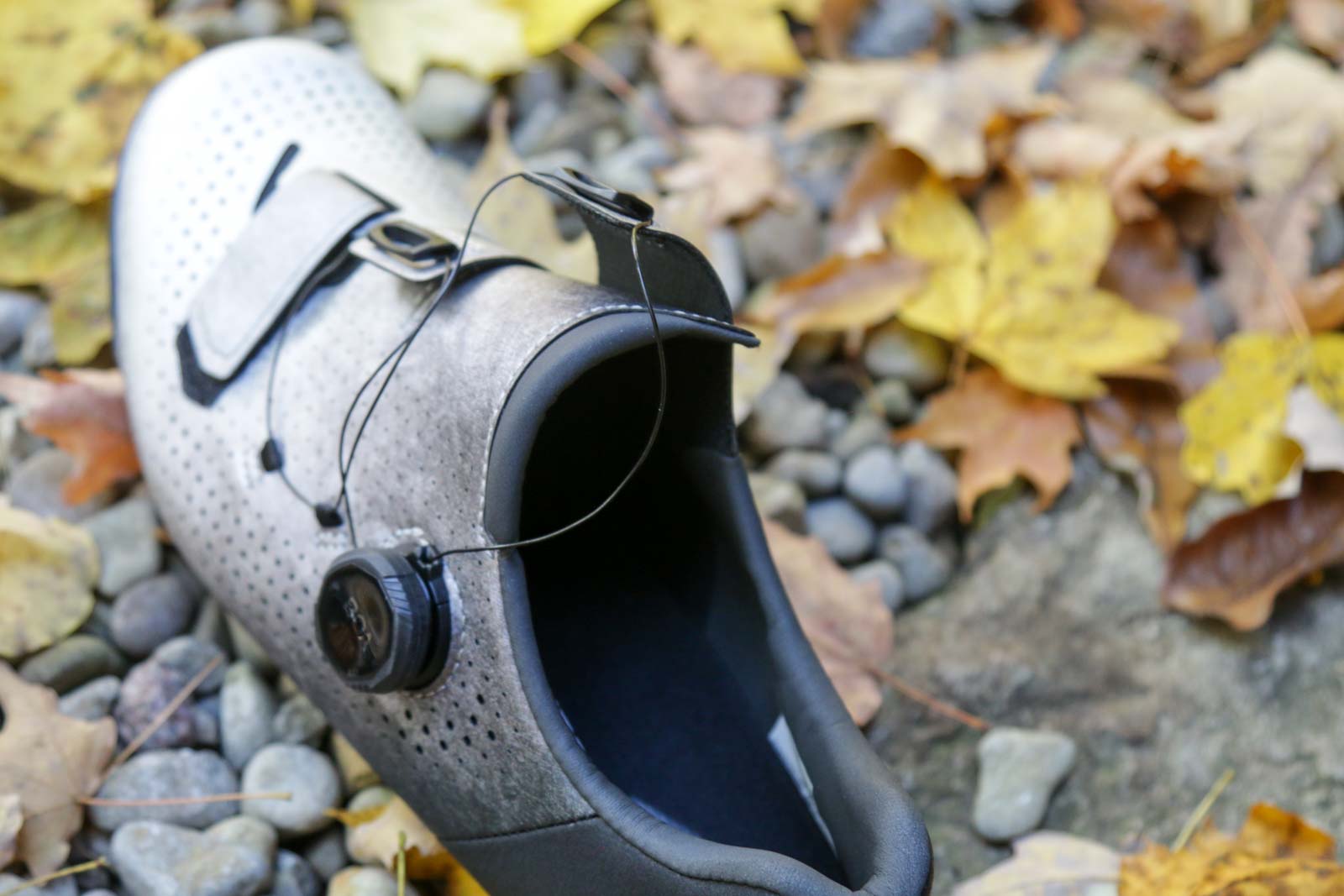 Shimano didn’t mention this in the press kit, but I found that they’ve also removed the elastic strap that anchored the tongue to the inside of the shoe from the previous version. It didn’t seem like that elastic did much for fit, but it did make the shoe harder to get on. So far, it seems like its removal is a good thing as it allows the shoe to be opened farther to get your foot inside. 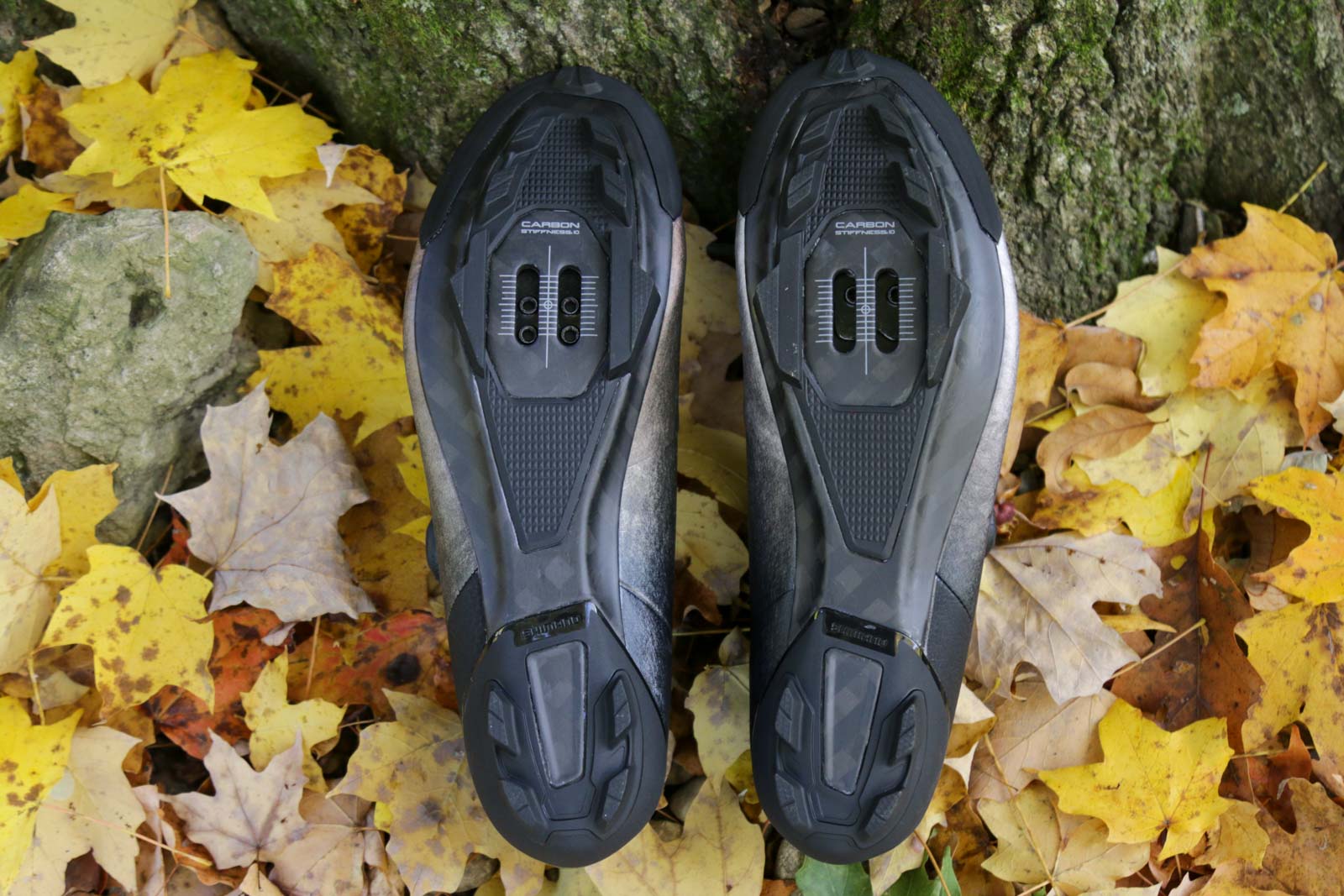 Both the RX8R and RX8 feature carbon composite outsoles with a stiffness rating of 10 for maximum efficiency. There’s also a lugged outsole with TPU sections for scratch resistance, though the lugs are kept to a minimum for weight savings. 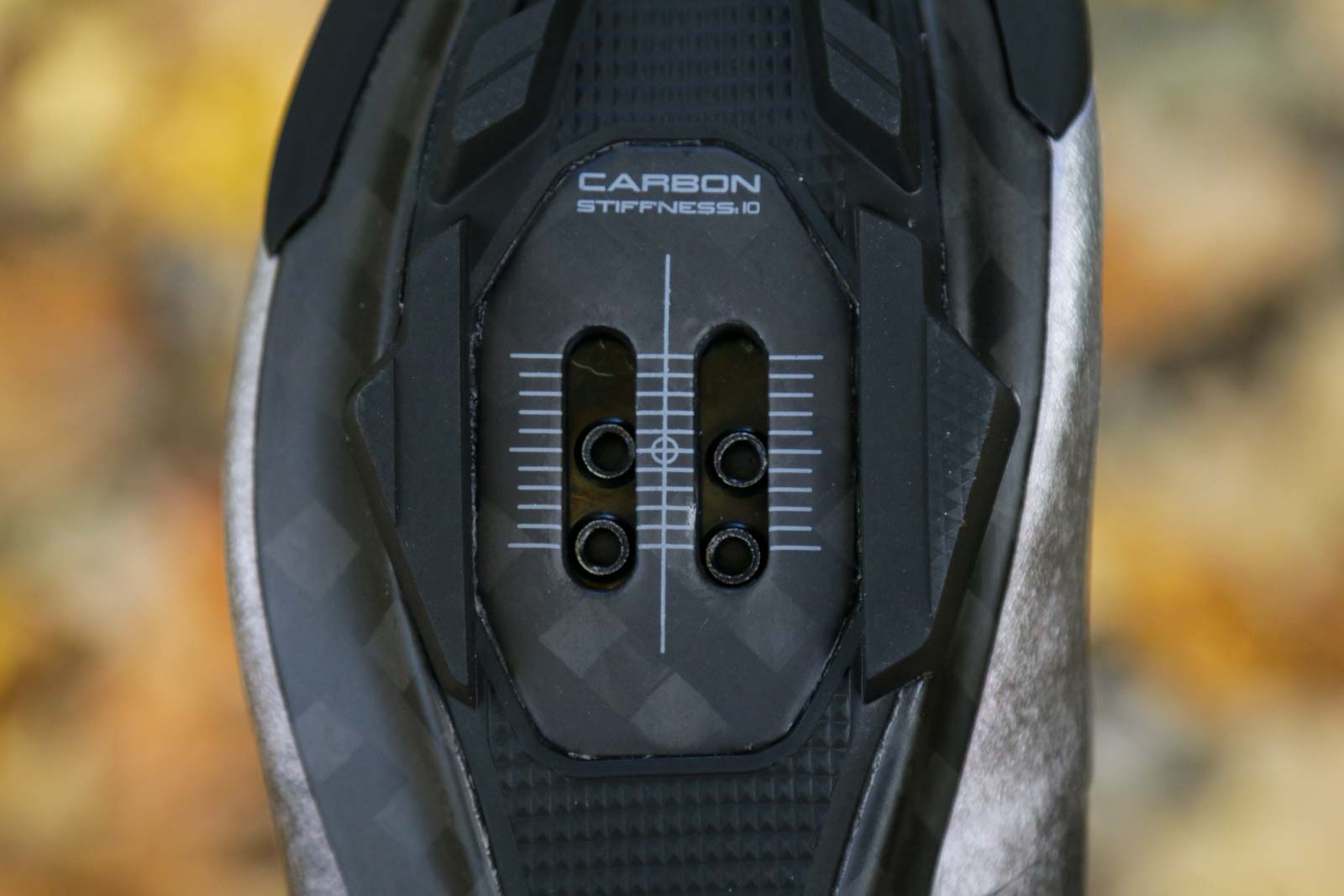 Along those lines, I had really hoped that Shimano would have widened the rubber lug on the outside of the cleat pocket, but it seems to be the same size as the previous model. Really my only complaint with the shoes is that this bit of rubber isn’t wide enough, and I have a tendency to roll my ankle to the outside while walking in these shoes. I love the shoes otherwise though, so I just try not to walk. 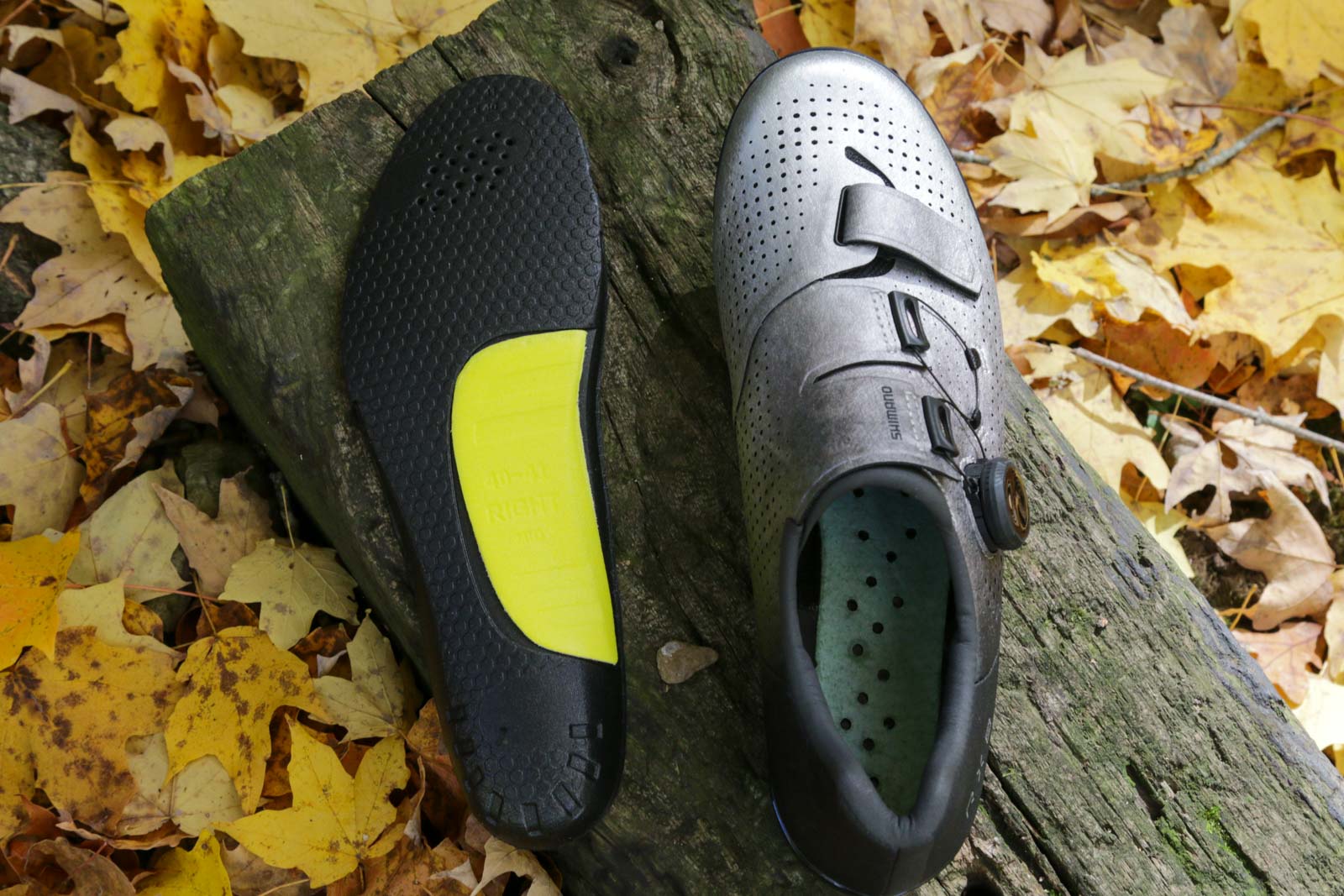 Inside, you’ll find insoles with adjustable arch support (two heights included in the box), and a Silvadur silver-treatment to keep them fresh. 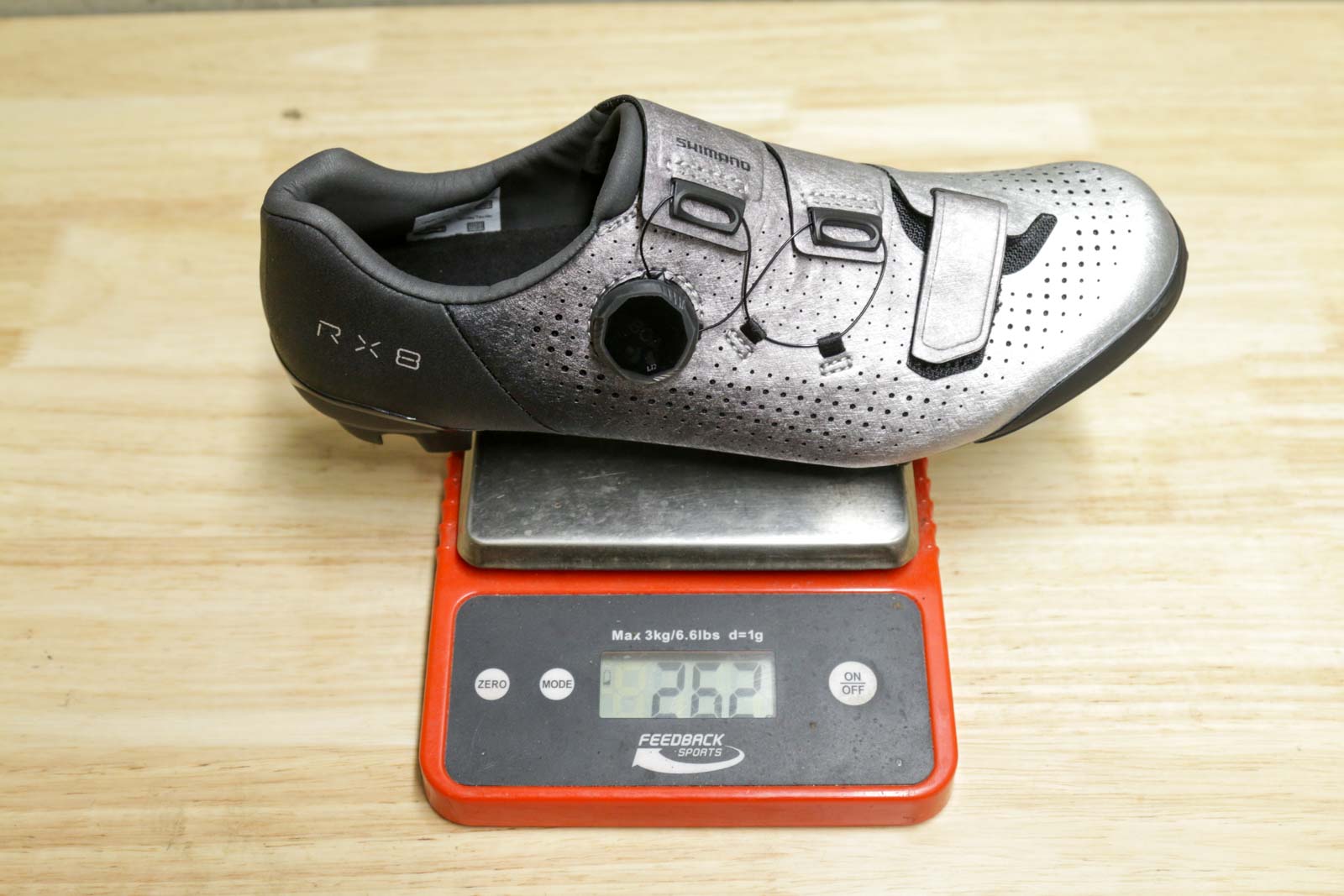 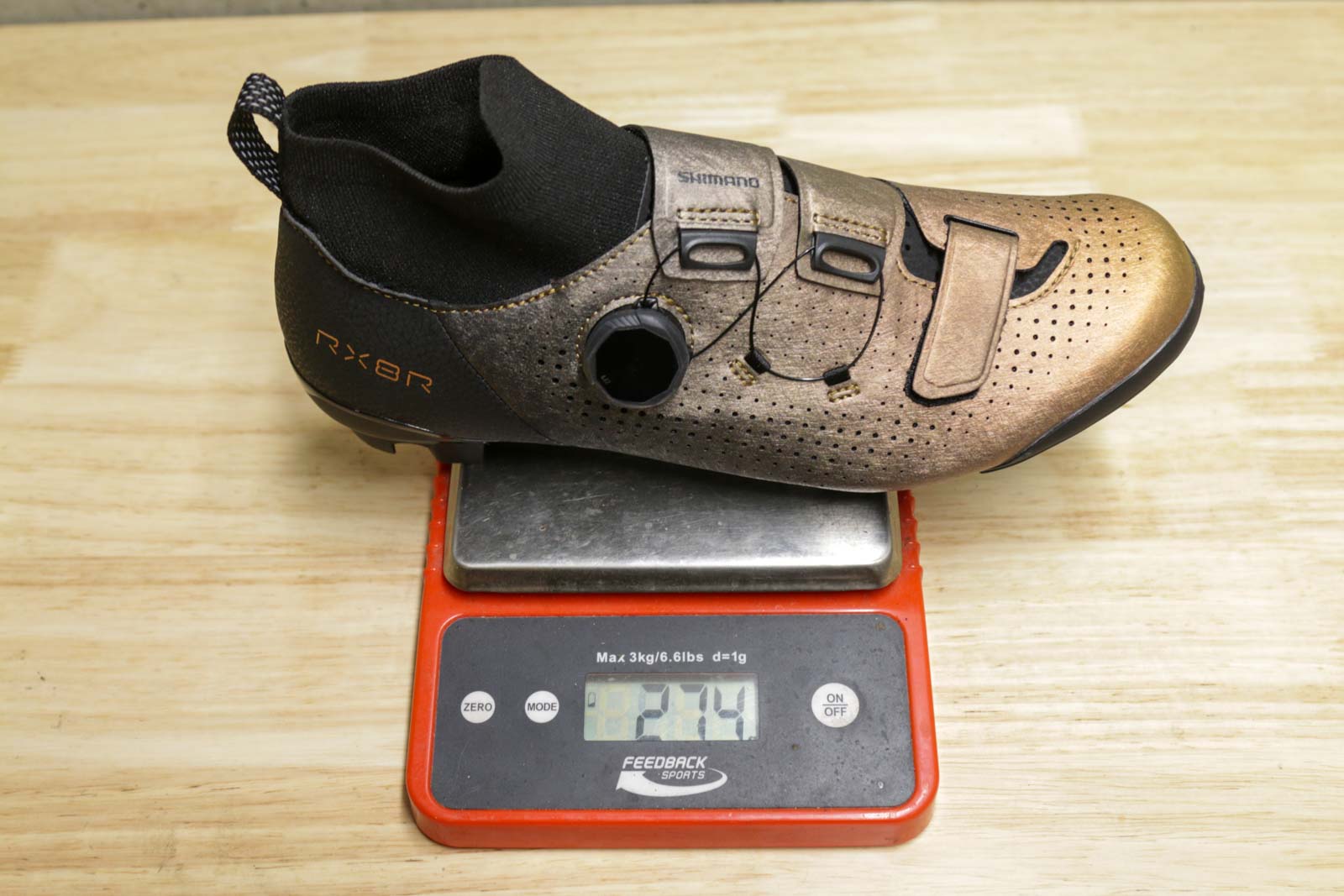 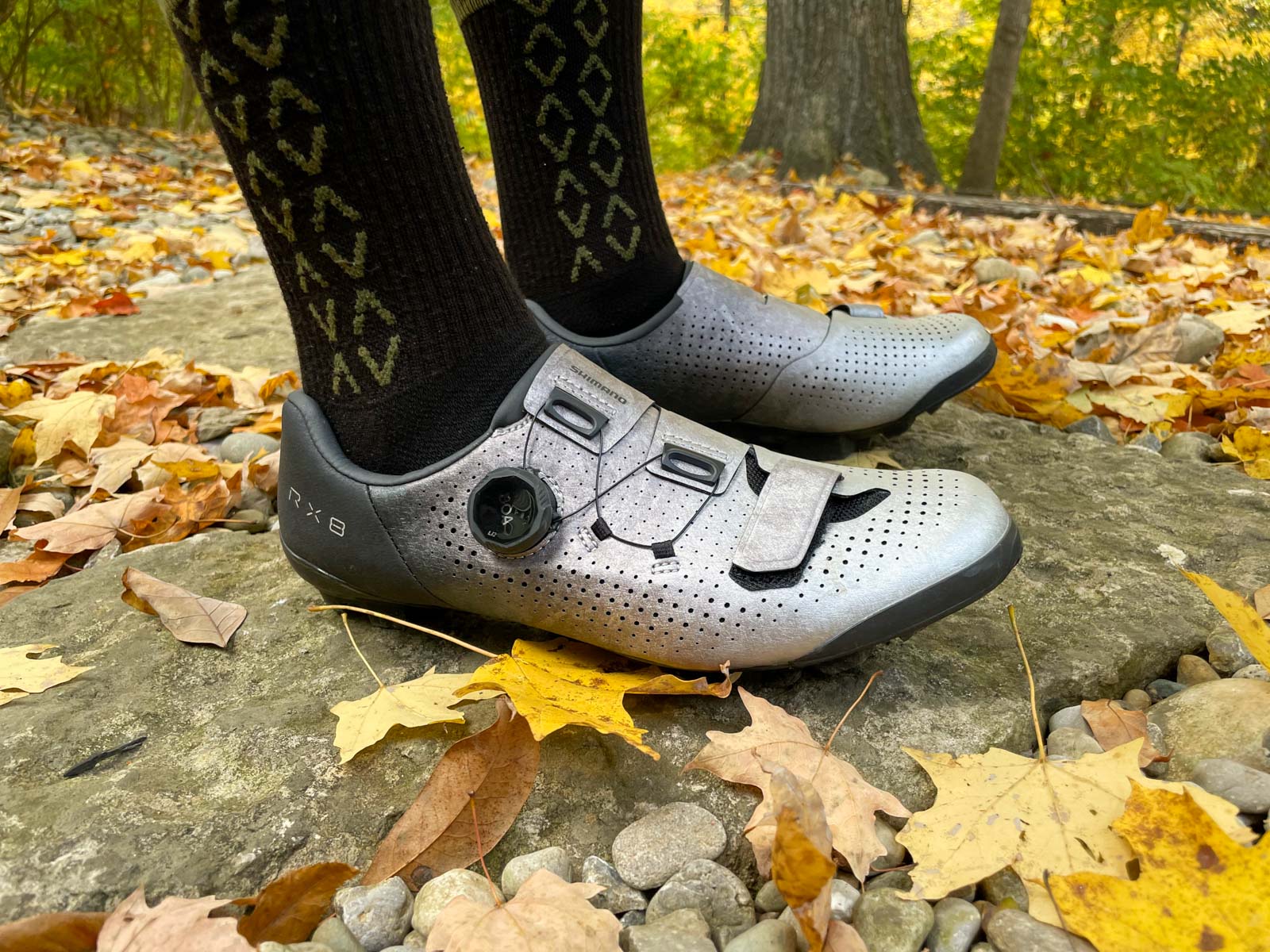 In spite of the occasional rolled ankle as mentioned above, the previous RX8 gravel shoes have become my go-to shoe for most of my faster gravel or adventure rides. The lack of half sizes in the prior model though meant the fit was always a bit big. Now that they’re available in a 41.5, the fit is better than ever.

Initially, the shoes feel a bit stiff, but they’ve already started to break in after one ride. If they’re like the previous model, they’ll take a number of rides to feel properly broken in, but you’ll be left with a shoe that is comfortable, durable, and still lightweight.

The performance of the RX8 doesn’t seem to have changed, which is a good thing since they offer a great blend of pedal efficiency and comfort either moving around on the bike or the occasional hike-a-bike.

The RX8 is easier to put on thanks to the lack of the elastic strap, and while the RX8R is now a bit more challenging to put on, the addition of the knit cuff should be a good feature for some.

Available in three colors as mentioned above, the RX801 is priced at $275. The RX801R is available in only the metallic orange colorway shown above and adds a bit to the price at $300 even. The availability of both models is TBA.

A TIGHTER toe box? Huh. I had to go to a 48 in the original rx8 from my normal 47 in Shimano shoes due to the slightly more tapered toe box.

Exactly, a narrow toe box? Kind of like the lack of components. The Shimano biking leadership is failing their customers and the company.

Why not ask shimano directly if the last and/of toebox had changed? Also why no information on wide and what colors will be available in wide!? Step up your game!

For RX8 I have a pair of 43 wide and 43, 44 in regular width.
I also own a couple pairs of the XC-901 and 902 in 43 wide.
The RX8 are definitely narrower than the XC-901/902.
I’m also thought the volume of the RX8 (inside height of the shoes especially in the toe box and at the arch) was quite a bit less.
This became a big issue whenever I went out for a long ride and the feet would swell up, leading it to quite a bit of discomfort.

I just bought a pair of RX801R 43 wide and while it appears that the volume has gone up quite bit but the width remains just as narrow as the RX8.   I was also disappointed to see the same narrow outsole as I have rolled my ankles just like Zach has.   I do like the built-in gaiter to keep the debris out.

So far on paper, shimano increased the inside volume, but kept the narrow width and outsole and added the gaiter (on the R model).

I’m going to take the RX801R out on a ride to see if it will be comfortable on a long ride.