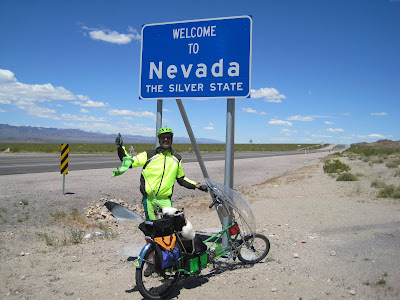 Recently Sierra Club member Oliver Bock decided he was going to ride his E-Bike across the US with a few friends in an effort to promote clean and alternative sources of energy. The ride started out in woodside, California and culminated in Washington D.C. where Bock and company met with his Congressional Representative. Brian F., with the Sierra club recently had a chance to sit down and interview Bock about his journey.Â  It is a pretty fascinating story and definitely worth a read.

Catch the interview after the break.

How long did you travel and when did you get there?

What did you talk about with your congressional representative?

Anna Eshoo is very concerned about green issues and sustainability. She’s frustrated with trying to get what they passed last June passed in the Senate. She talked about trying to green Washington and the Mall area. And we talked about bike trails. D.C. has made strong commitments to bikes, but they donâ€™t allow electric bicycles on bike paths. She said she would talk to (Department of Transportation head Ray) LaHood about possibly getting that changed.

Talk about electric bikes for those who donâ€™t know about them.

There are two categories. There are ready-made bikes that typically have a torque sensor and axle that activates itself when you pedal. The motor doesnâ€™t work if you donâ€™t work. The other category, which is what we did, is a kit where you can buy a hub motor and wire it up. Those have throttles on them. And you pedal assist. Anytime we’d talk to anybody about electric bicycles they’d asked, “Do you charge the battery when you pedal?” Itâ€™s a legitimate question because youâ€™re generating power with your legs. But the answer is not really. The pedaling makes the battery last longer. We were getting about 85 to 90 miles on a charge, which really surprised us. If we didnâ€™t pedal at all, weâ€™d get about half that. So our pedaling was enough to ease the burden on the battery.

We brought a solar panel on a support vehicle with us. But this wasnâ€™t an off-the-grid project. I donâ€™t think it was possible to do that. We charged using the grid. We camped a lot and found places that had power. We figured we used about 1/20th of the amount of electricity used for an electric car, just based on the weight difference. And then with pedal power it adds even more efficiency. Itâ€™s really insignificant how much energy we used. 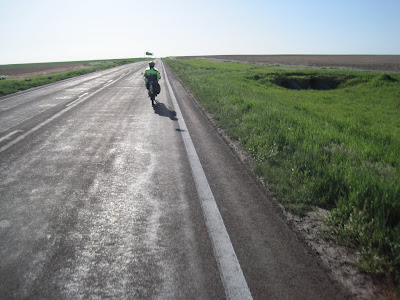 The most surprising part of the ride was how much fun it was to ride an electric bicycle. Youâ€™re in a really comfortable position. Thereâ€™s no stress on your back or neck. Youâ€™re sitting up looking around. Itâ€™s a wonderful way to see the world.

One thing I noticed is, when you drive across the country, you see a lot of wind farms. But you donâ€™t see any signage about what theyâ€™re doing. When you drive across Kansas, thereâ€™s nothing to look at. And suddenly there are 100 2-MW turbines gracefully sweeping through the air. And I want to know some real information. Give me a sign with some numbers. So weâ€™re going to look at what itâ€™d require to get signage, kind of like what you see on freeways, similar to those signs you see that say, “This section of highway is cleaned by the Kiwanis Club.”

Where was it the toughest to ride?

As any biker would agree, the biggest challenge is headwinds. Even with the motor, we had to work pretty hard. We hit some major dust storms. From Flagstaff to Window Rock (in Arizona) there was a dust storm that closed the interstate. The dust gets into everything. That was a day we portaged about 30 miles. It was too insane. Northwest New Mexico was even worse. Talking to people who live there, they said the wind and dust were never that bad. Thereâ€™s desertification. Itâ€™s blowing over cropland thatâ€™s pretty marginal to start with. When you combine that with coal companies extracting water from the aquifer to make their coal slurries — itâ€™s amazing how everythingâ€™s interconnected with whatâ€™s going on.

Besides Rep. Eshoo, who were some of the people you met along the way?

Well, we attended events that ranged from showing up to bike shops and talking to them and customers about electric bikes to more sophisticated events. In Window Rock we had some exhibitors. It was elaborate. We had four or five newspaper articles. We had a couple of radio interviews that increased the curiosity. We met with a couple of mayors. The mayor of Flagstaff, Sara Presler, was completely delightful. She got on the electric bike. She was tentative at first. She ended up riding it for about 45 minutes. We also met the governor of Colorado. There was a group in Denver honoring Lester Brown and the governor was speaking there. Colorado is shooting for 30 percent renewable. 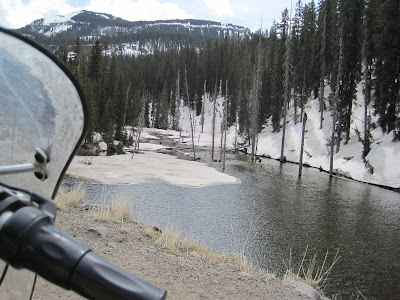 How was your message received? Any critics or unexpected responses?

Early on there were two older guys we were talking to. I started about global warming and immediately it turned from friendly into, “Oh, we donâ€™t believe in that!”

Using the language of climate change has become political. So anyone critical of politics is going to look at the whole conversation as a political one and not science-based. So after that we chose to stay away from that language. What resonated was talking about green jobs, especially with the oil spill. We’d talk about the potential of wind and solar.

What did you take away from the trip?

Gratitude for the people we met who are really committed to this stuff. Some of these people could be making huge salaries. Theyâ€™re very talented and bright. But for them thatâ€™s not what itâ€™s about. They donâ€™t have money. They just really care about what they do. One guy we met in Champaign — his wife is pissed off because he took out a loan to get an electric vehicle and everything he does is focused on trying to move sustainability forward. Heâ€™s an IT guy who works on the campus there. He was just very gracious. But he hosted us and showed us around and was really wonderful. That was the positive.

On a negative note, it was disappointing to see the health of the American population. Physical and mental. So many people are living on corn and sugar, a highly processed food diet. Itâ€™s hard to feel hopeful about where weâ€™re going. Seeing a lot of that was a little discouraging.

Our next steps are doing some kind of publication and researching the stops we did on the way and flush out what these people are actually doing. Weâ€™re interested in connecting some of the people we met with each other. They donâ€™t know each other but there is some sort of synergy going on out there and itâ€™d be great to get some networking going.

Check out the original post, along with comments on the Sierra Clubs Blog. 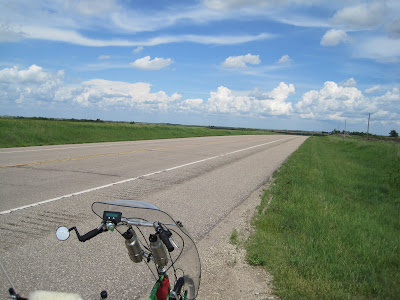 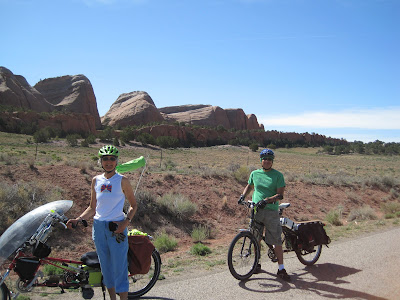 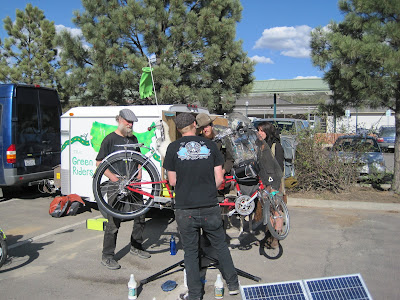 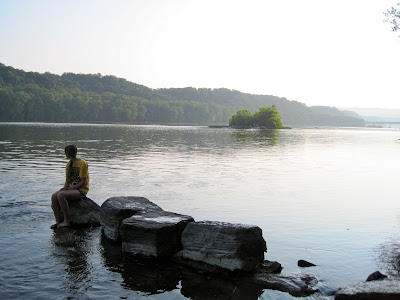 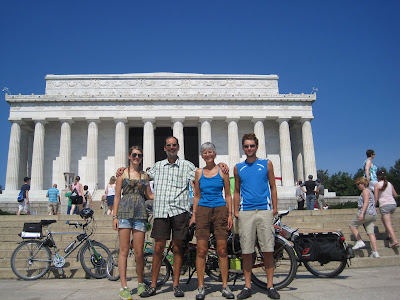 I’m not sure posting stuff about Sierra Club earns your site any respect. The Sierra Club is the worst thing for conservation in America. Granted we all want nature protected, but Sierra Club stops Nature from being explored – by making it Prohibited to visit. They have closed more trails to Mountain Bike riders, closed more parks, stopped more area’s from being visited by bicycle than any other organization… How does that help cyclists??? I wish you wouldn’t promote things about companies that harm our industry. I think it’s great when people go extra lengths for a cool ride both road or mountain, but anything to do with the Sierra Club turns me OFF. That organization needs to be stopped.

+1
Please don’t post about the Sierra Club unless it’s an article about stopping their bids to designate everyplace “wilderness” (thus prohibiting bikes).
On a brighter note… Thanks for an awesome website. I check it everyday without fail. Best cycling news anywhere.

When people complain about the Sierra Club, I have to wonder–do you really think that all that wilderness would be there, and bike-able, if only the Sierra Club didn’t exist? More likely underwater (like Hetch Hetchy) or under asphalt, after being leveled for a supercenter or ten. Sheesh. I like to bike as much as the next person (just got back from a week long trip in NM). But I still have feet, too, and I remember how to use them to push against the ground. I can deal with seeing some areas by foot, if it’s easier on the environment.

And y’know, the Sierra club has both hiking trail building service trips and bike trail building service trips. You want more trails that are bike-friendly, without contributing to erosion? Trails where the occasional bike rut is not a risk to the footing of hikers? Build ’em. The hiking trails were (largely) designed for foot travel, and built by hand tools and sweat, by volunteers, to serve, long term, as stable hiking trails. Can anyone blame people for wanting to protect that?

This is too funny….. how many support vehicles?! How green?, had to recharge wha?! what a lame stunt.

This should have been done right, with regenerative power, with assist, sans a motorized support train. hybrid Off road. On the pioneer trail then onward to DC…… That should be the new GE prize.