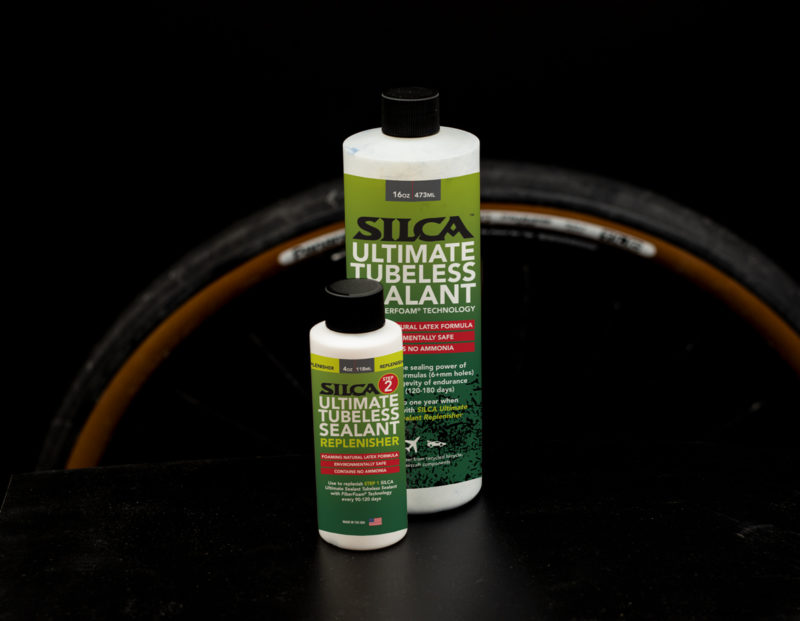 How to make a better tire sealant. That’s a question as old as tubeless-ready tires themselves. To date, we’ve seen a lot of different formulas. Some have stuck around, others evaporated quickly. Now, Silca is mixing up their own formula–which they call the Ultimate Tubeless Tire Sealant.

What makes it the Ultimate? Well, when setting out to create the sealant, Silca really dove into what makes different formulas successful. Sealants based on a natural latex formula generally have better sealing power, able to seal bigger holes faster. But compared to sealants with synthetic latex or other formulas, natural latex sealants typically have a shorter lifespan and don’t work as well at lower temperatures. 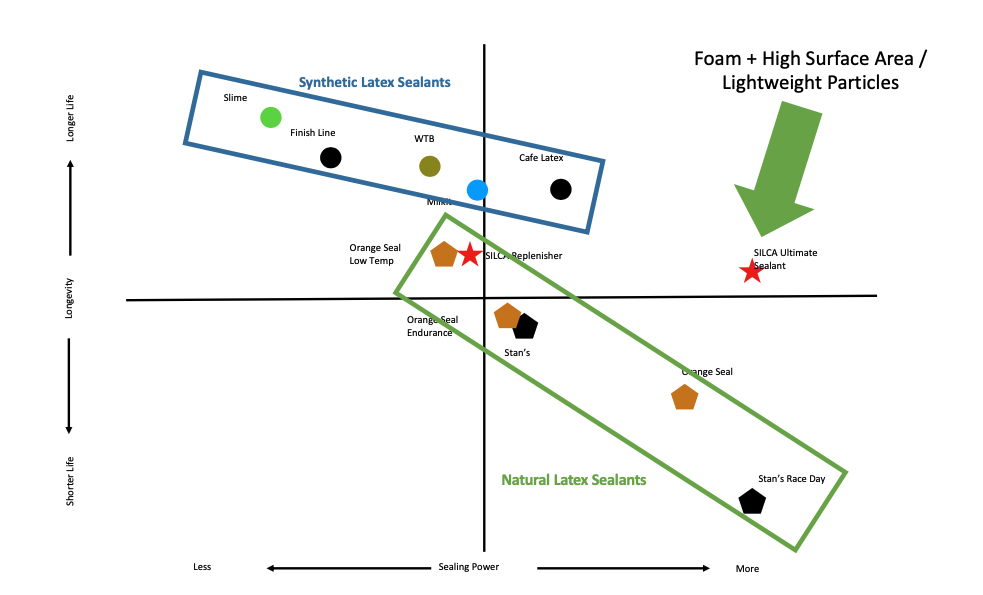 There’s also the question of particles and additives used to make sealants plug holes better. The problem? In Silca’s testing, most of these particles are too heavy to actually move to the puncture when the tire is spinning. They claim that particles will only work if they’re mobile, and since the bicycle wheel acts as a centrifuge as it’s spinning, those particles are stuck to the inside of the tire and unable to move until you stop. By then, you’ve probably lost a lot of air and sprayed sealant all over your bike and yourself.

Looking at the performance of synthetic latex sealants, Silca claims that Cafe Latex has the best sealing power of the synthetic sealants they tested (Slime, Finish Line, WTB & Milkit). The reason? It all comes down to the foaming action. Silca then surmised that if they were able to come up with a particle that was light enough, the high surface area of the foam combined with the low density, high surface area of the particle would allow the particles to remain mobile–even while the wheel is spinning.

But what particle would be light enough to work? The answer is carbon fiber. Specifically, pyrolyzed carbon fiber. Typical sized carbon is too heavy. But pyrolyzed carbon from CarbonTech is recycled from things like race cars, planes, and even old bicycles & components. The pyrolyzation process removes any resin or materials that aren’t the carbon fiber itself through the addition of heat, while the raw carbon itself is left intact. The result is carbon fiber that is very light with a high surface area. Combined with what Silca calls their FiberFoam technology, the sealant claims to seal up to 6+mm punctures up to 80-90psi and is effective down to 10ºF/-12ºC.

In addition to staying mobile, carbon fibers have other advantages as well. As the blend of 6mm, 9mm, and 12mm long fibers flow into the puncture, Silca claims that they stack up and create a dam seal of structural carbon fiber that is 3x stronger than typical latex seal. Their claim comes as a result of puncturing tires, allowing them to seal, and then trying to puncture the tire again in the exact same spot.

As an interesting side effect of the sealant’s plugging power, Silca says that you cannot add the sealant through a tubeless valve. It will simply plug up the valve. Instead, you have to add it directly to the tire by opening up a sidewall. When asked what the sealant would do to the valve from the inside, Silca claims that in testing it wasn’t as much of an issue. 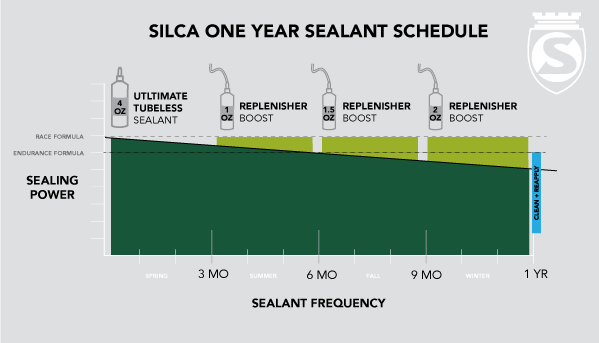 However, there is a way to refresh your Silca sealant through the valve thanks to their Ultimate Tubeless Sealant Replenisher. Essentially a high solvent, high glycol product, Replenisher can refresh the original sealant for a year – 18 months depending on the environment with 2-3 replenishments. 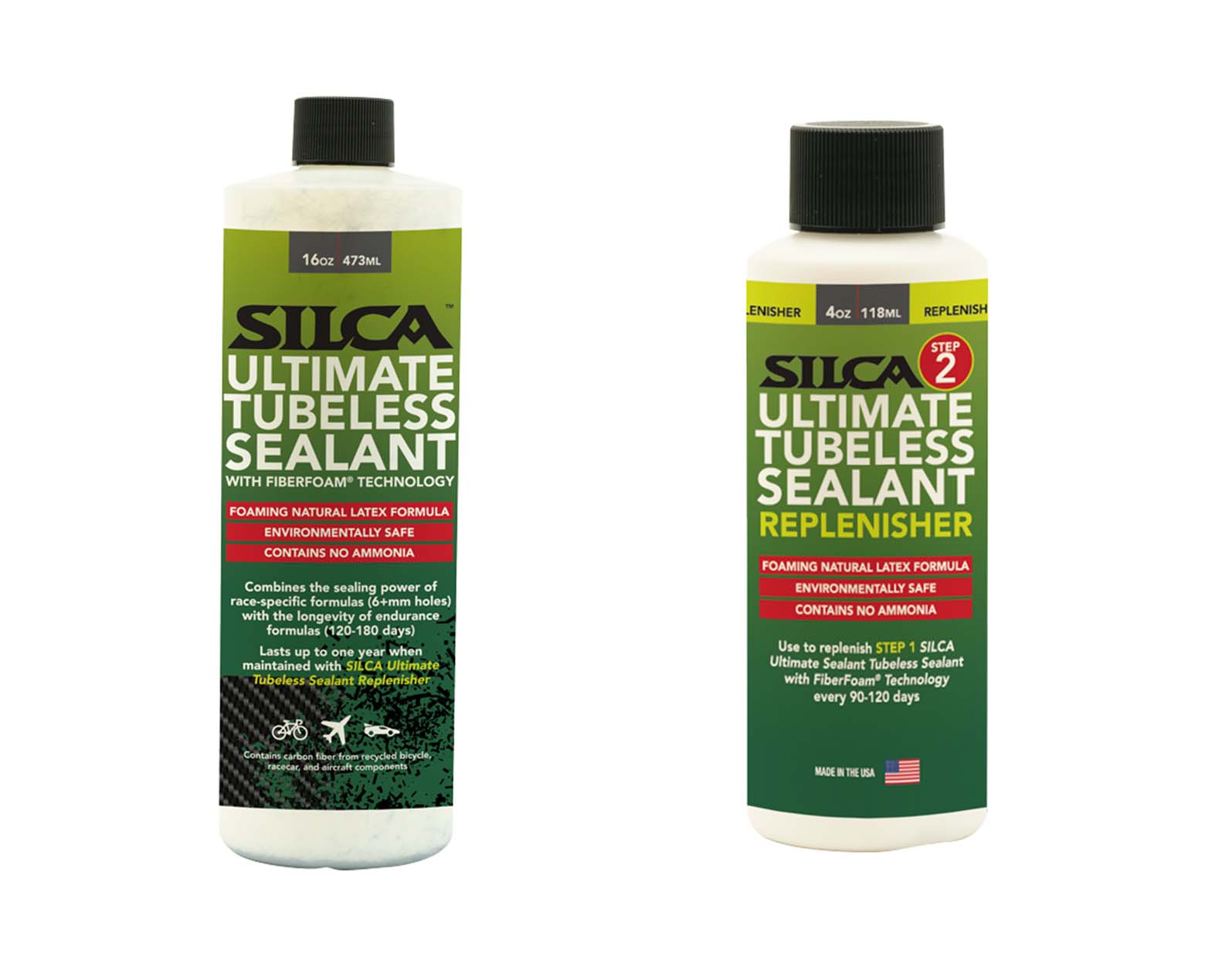 At this point, we have not tried the sealant so we can’t confirm any of Silca’s claims. But they were in the process of bottling the sealant at the time of the presentation and should have it available soon. Available in 8, 16, and 32oz bottles, the sealant is priced at $18, $24, and $38 respectively. The Replenisher is sold separately for $12 for a 4oz bottle.

The replenisher is $3/oz, and the smallest sealant is $2.25/oz. Something’s wrong with that pricing. Why would the replenisher cost more than the full sealant? And why would I use it if it costs more?

A lot of people won’t want to take their tires off to remove and replace sealant. This makes a lot of sense for people without air compressors, and/or people that don’t wanna waste CO2 cartridges.

Good argument, but that pricing’s still quite strange.

That was my experience as well. That, and the foaming meant it was a nightmare of a mess if you had to take the tire off and put a tube in if the puncture didn’t seal. Hopefully this solves that with the carbon fibers. We’ll see.

Modern CafeLatex is far better than the original stuff.. the newer version (made in the last 2 years or so) actually seals on par with or better than original Stan’s or Orange Seal endurance.. it also doesn’t foam quite as much as the early version and ours foams even less.. the key to the foam is to have just enough that the carbon fibers are dispersed and mobile inside of the spinning wheel.

I’m impressed with the idea of a replenisher being a different formula than the initial mix. Not sure that I want to pay that much to try though.

Carbon Fiber and foam solution sounds great for the environment!

You do realize that if the carbon wasn’t used in this sealant then it would have already been in a landfill, right?
This sealant is giving a second life to something that is otherwise useless.

Love the concept and will give it a try. I am curious if the sealant has been tested with tire inserts such as Vittoria or CushCore. Specifically, if the fibers are still free to migrate or if the foaming action and migration is reduced by the insert.

Good point. I run the nukeproof ARD inserts and they’re already known to drink more sealant than other brands.