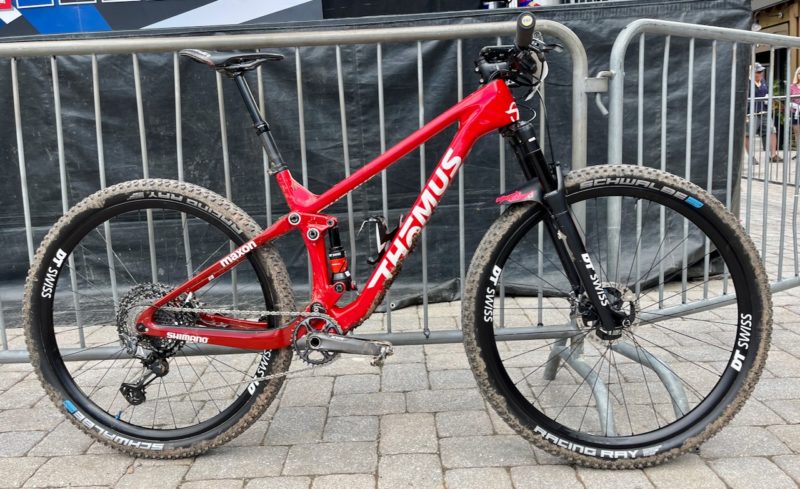 You don’t know what you’re missing if you haven’t watched the UCI Cross-Country Mountain Bike World Cup action at Snowshoe. The epic battles we hoped for emerged from the rain-soaked trails of wild, wonderful West Virginia. The racing was fast and to the wire for nearly every discipline. 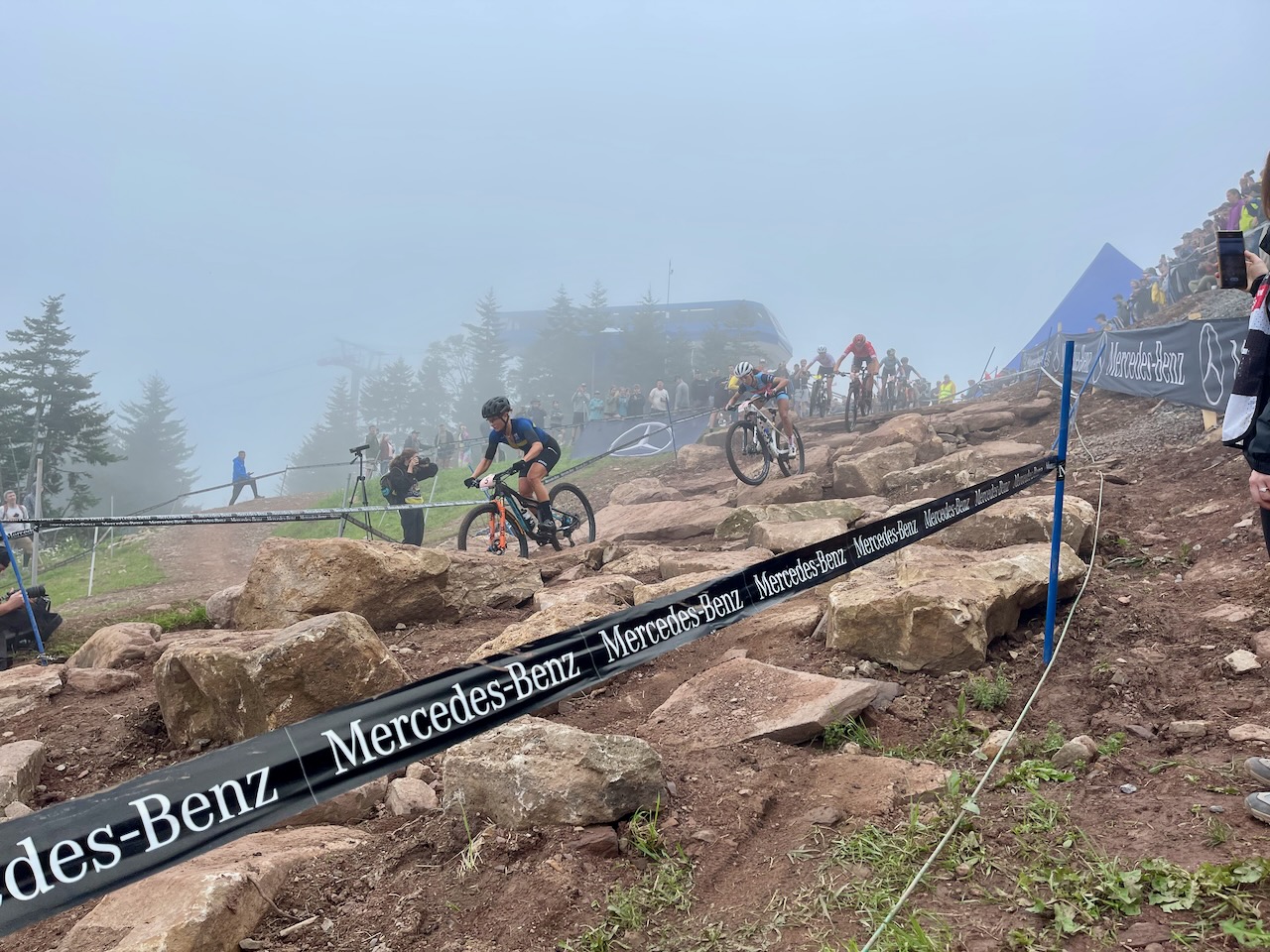 One race that all fans looked forward to was the battle for the win in the Elite Women’s XCO, and with big names Loana Lecomte, Pauline Ferrand-Prévot, and Laura Stigger missing from the start list, the pointy end of the race would be hotly contested.

Rush to the front — rain on the way

The race started under damp conditions, and from the start Jenny Rissveds took the front, riding what looked like an effortless pace. Hot on her wheel was former U23 World Champion Alessandra Keller, who nearly snagged the win in the short track earlier in the week, only to be edged out by American Gwendalyn Gibson. 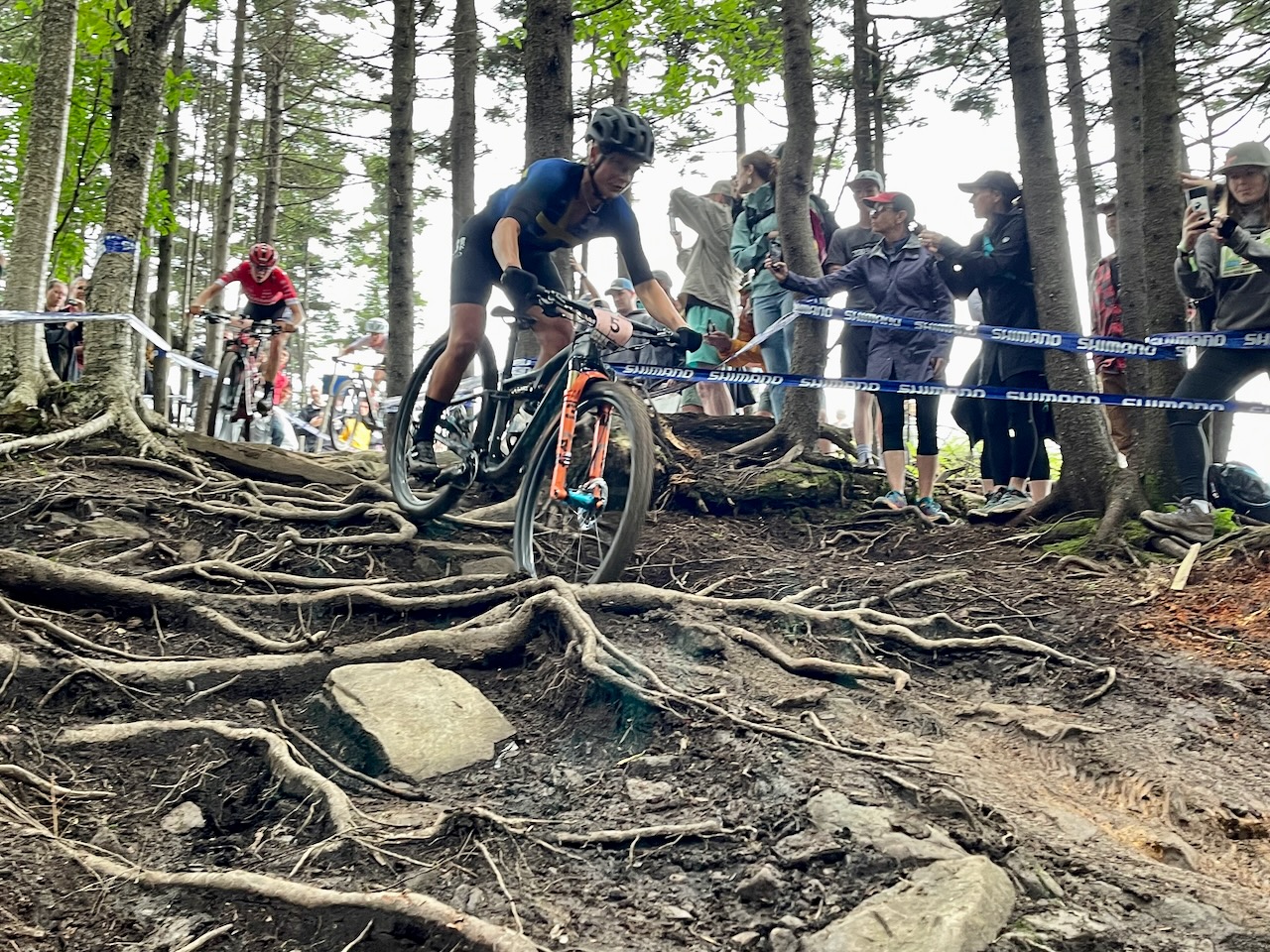 As the laps ticked on, it was apparent that the course was changing, and the weather was worsening with every passing moment. As the rain beckoned, riders looked to be the first to enter critical sectors, Anne Terpstra, Jolanda Neff, and a trio of US riders – Courtney, Hayley Batten, and Savilia Blunk fought tooth and nail to be the first wheel into the rooty sections. 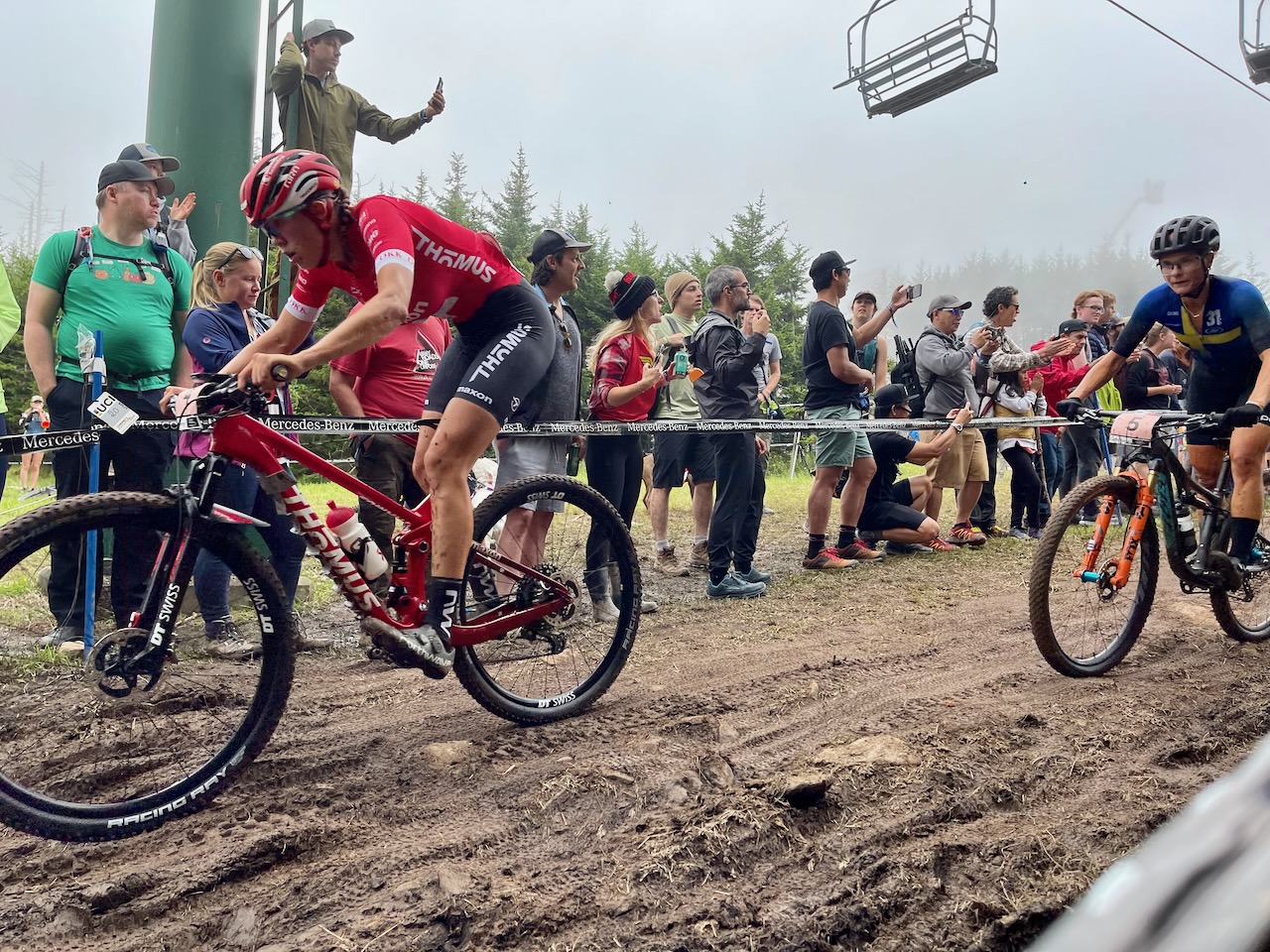 The leading pack was eventually whittled down by the pace and elements. Rissveds, Keller, and Terpstra established themselves as the women to beat and dispatched their pursuers as the fourth lap (and steady rain) began. 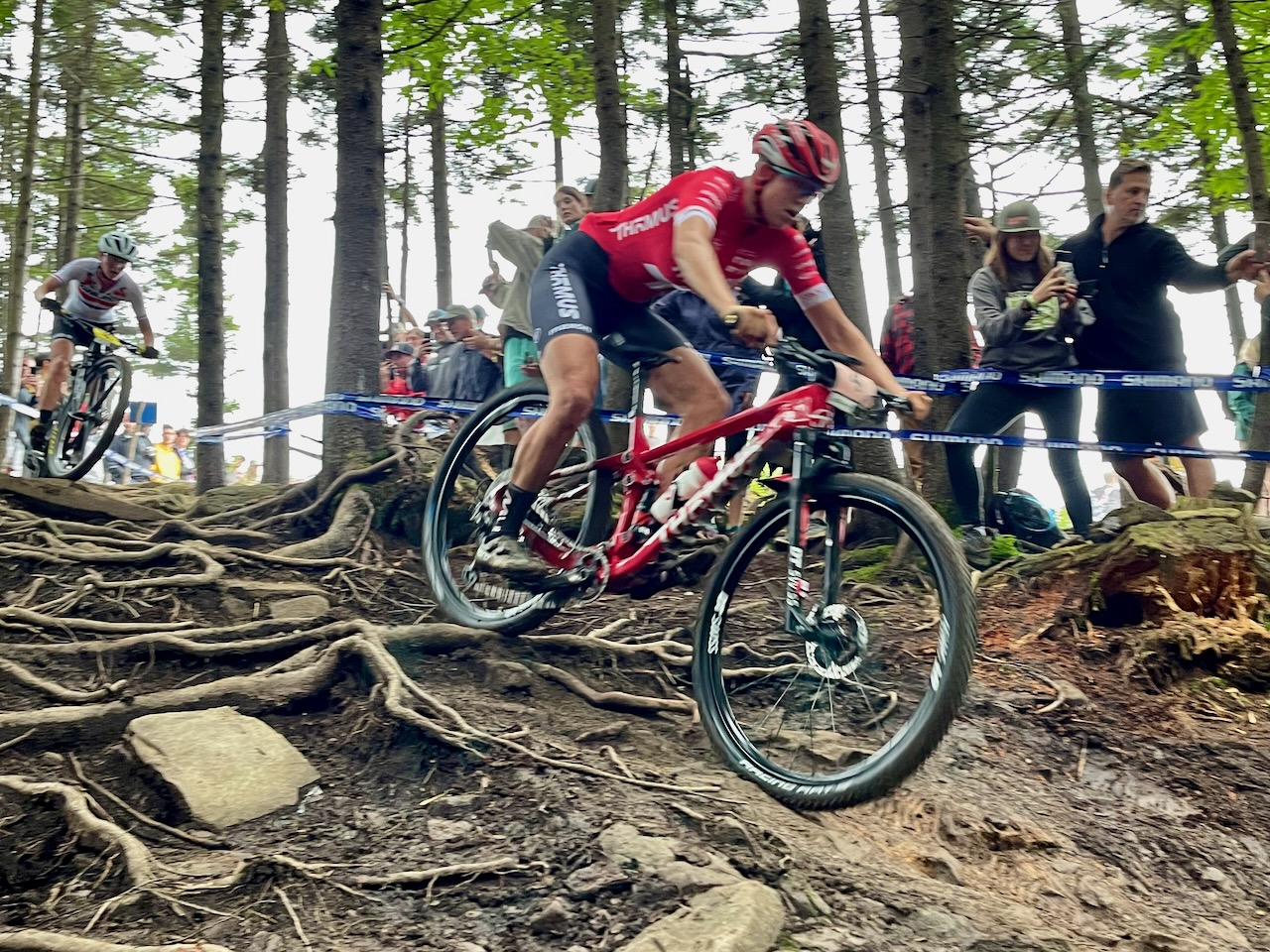 Features change in the rain

For the next three laps, Rissveds would try and drop her pack mates on every technical sector, only to see Keller reeling her back on the uphills. Nonstop rain opened the final lap as Jenny Rissveds led the charge. But as the course changed under the torrential rain, unassuming features became very challenging. Rissvends’ front wheel washed out as the leader rolled into an off-camber into a punchy climb at the beginning of the final lap. 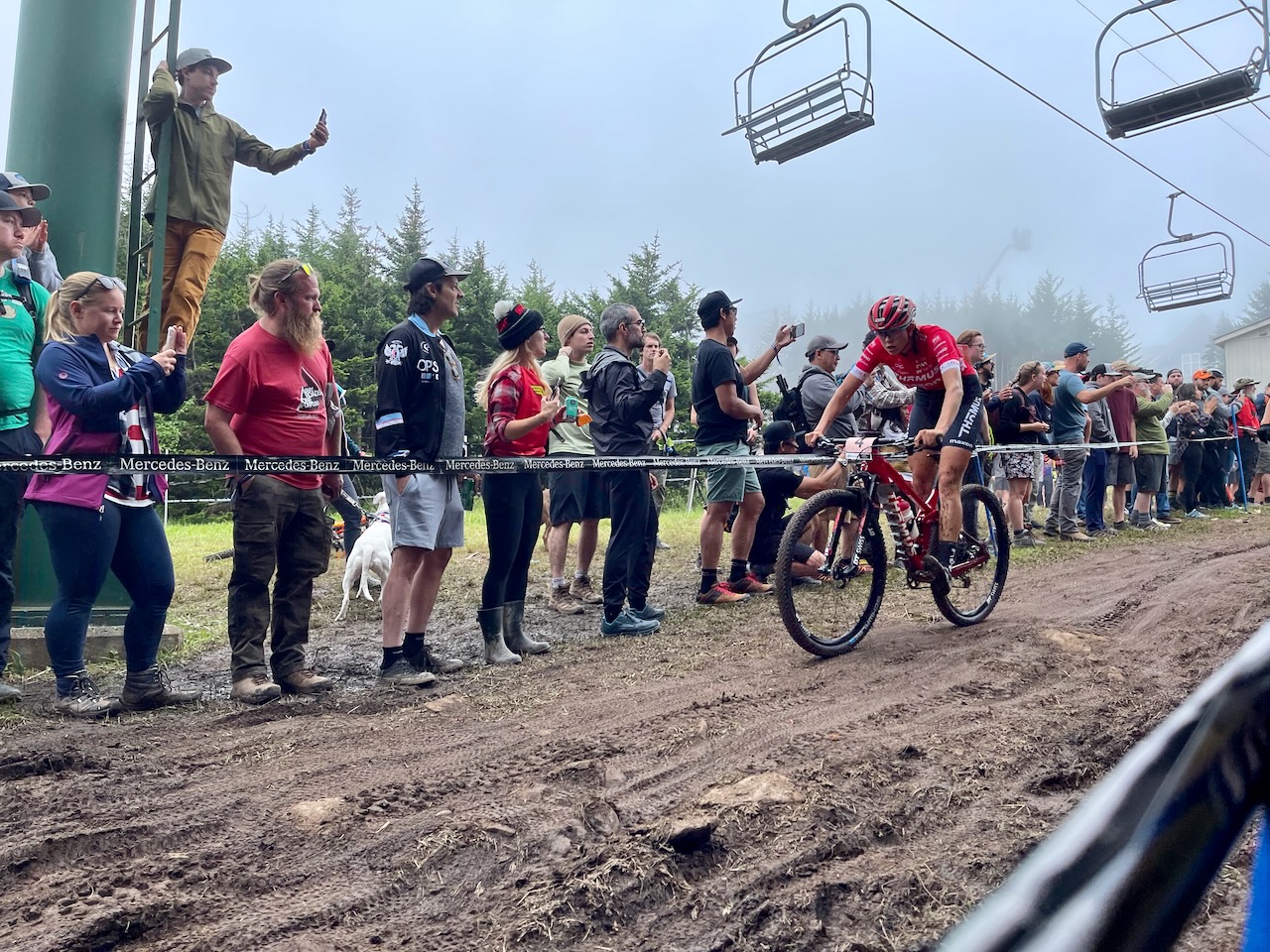 Rissveds would have to dismount and run the hill only to take the B-line and cautiously roll another off-camber downhill. Keller would pass Rissvends just as she hit the ground, keeping the same pace, then attacking all over the pedal-heavy sections of the course, eventually putting over 37 seconds into Rissveds by the end of the race. 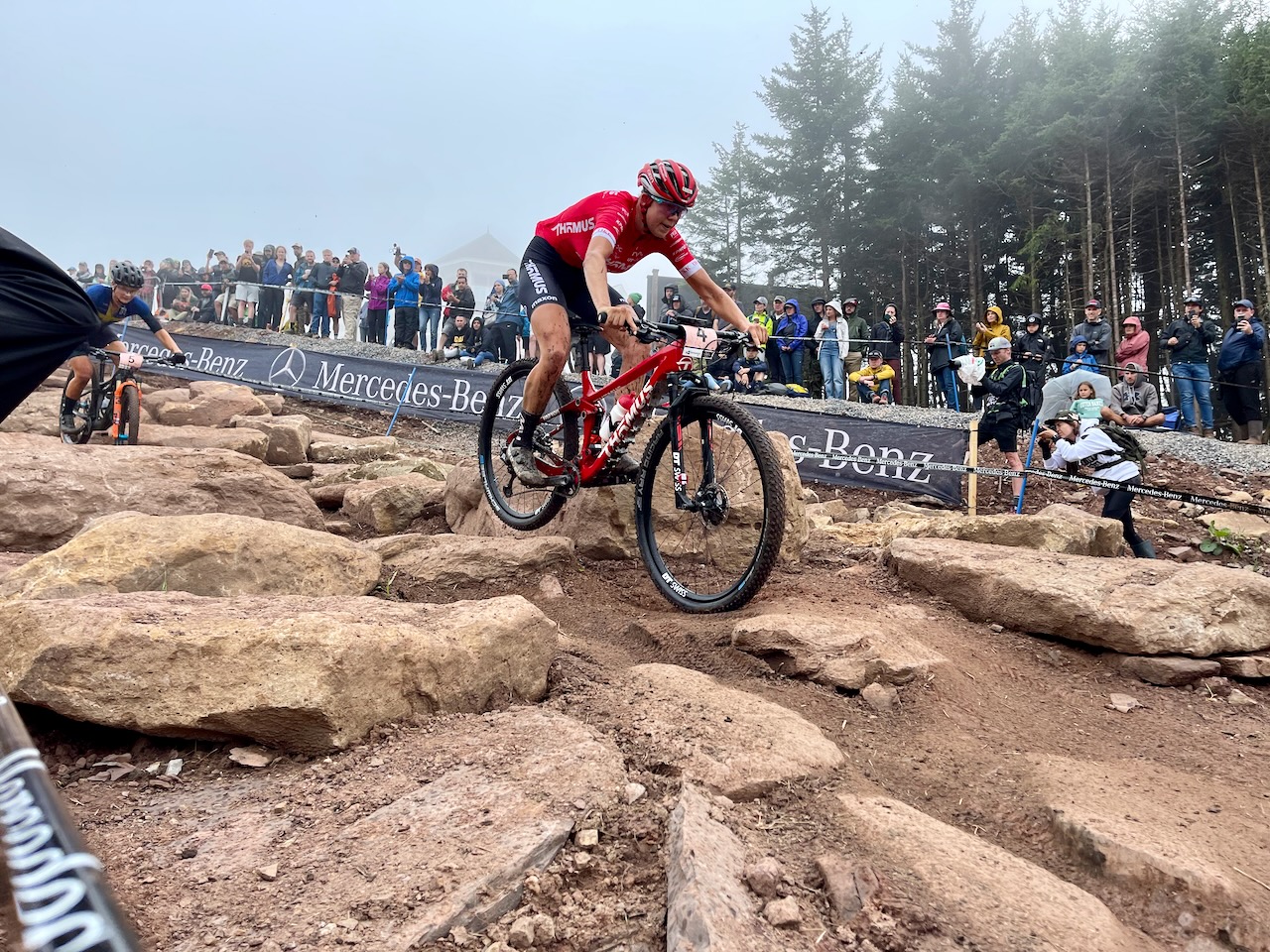 Keller attacked every hill as if it were a summit finish, eventually rolling into the town square finishing straight, arms raised and triumphant.

Rissveds would cross the line 37 seconds down on Keller, but the fierce competitors quickly exchanged hugs and handshakes. This victory is Kellers’ first Elite World Cup win, and we suspect it will not be her last. 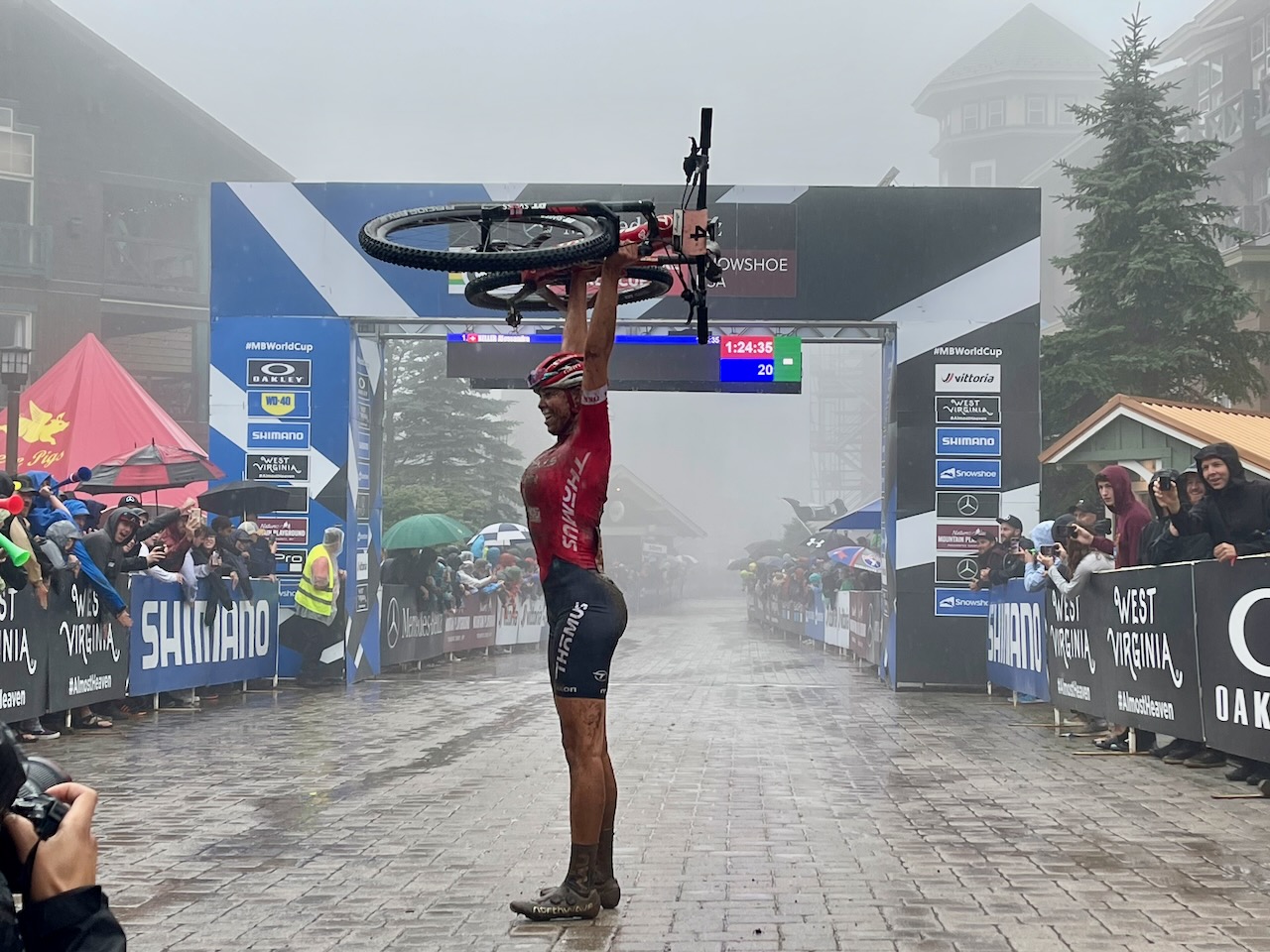 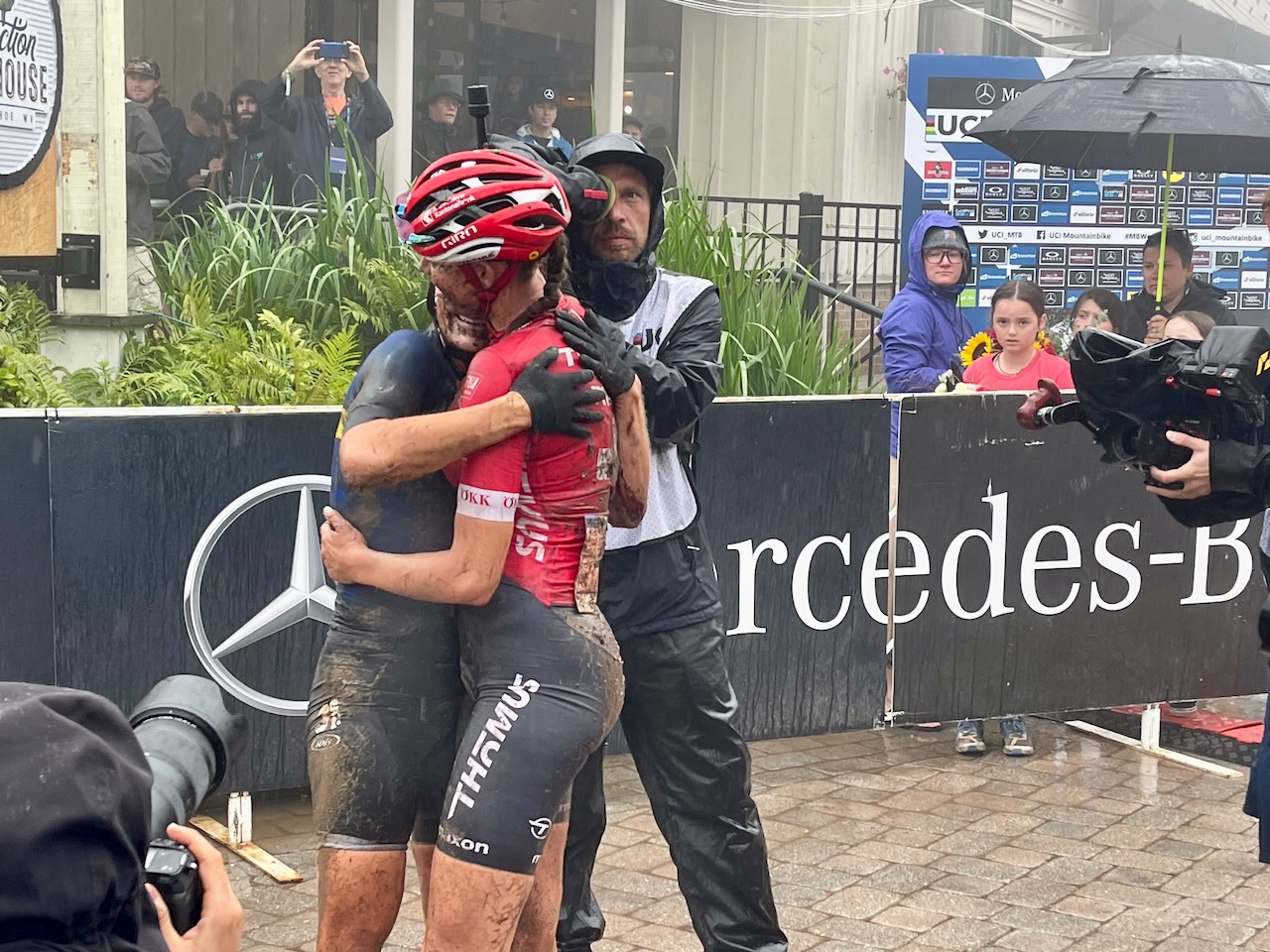 “The muddier it got, the better I got, and somehow I won the World Cup,” said an elated Keller. “This season has already been great with a short-track win, and now this first XCO win is crazy. I’m really happy.” 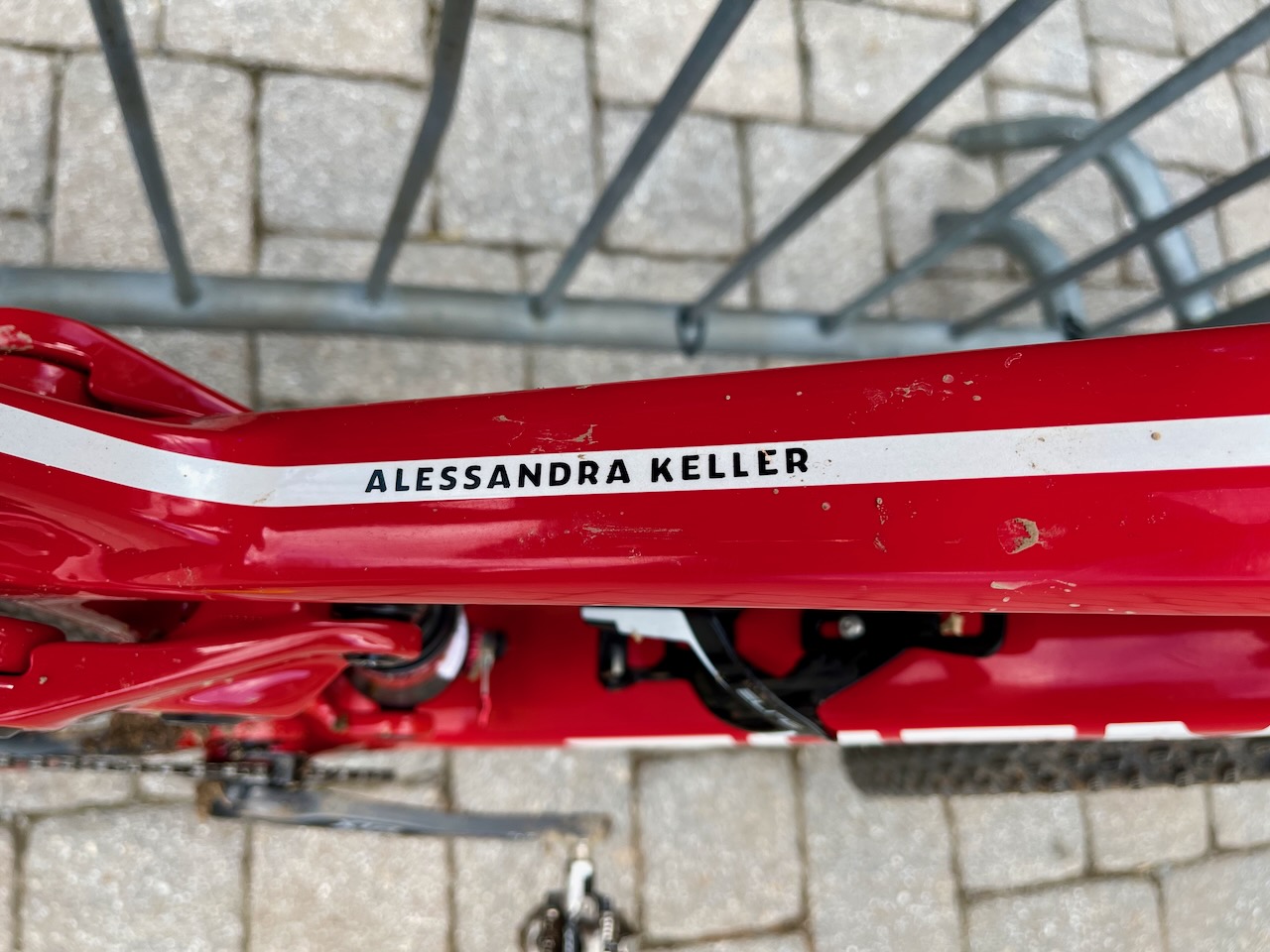 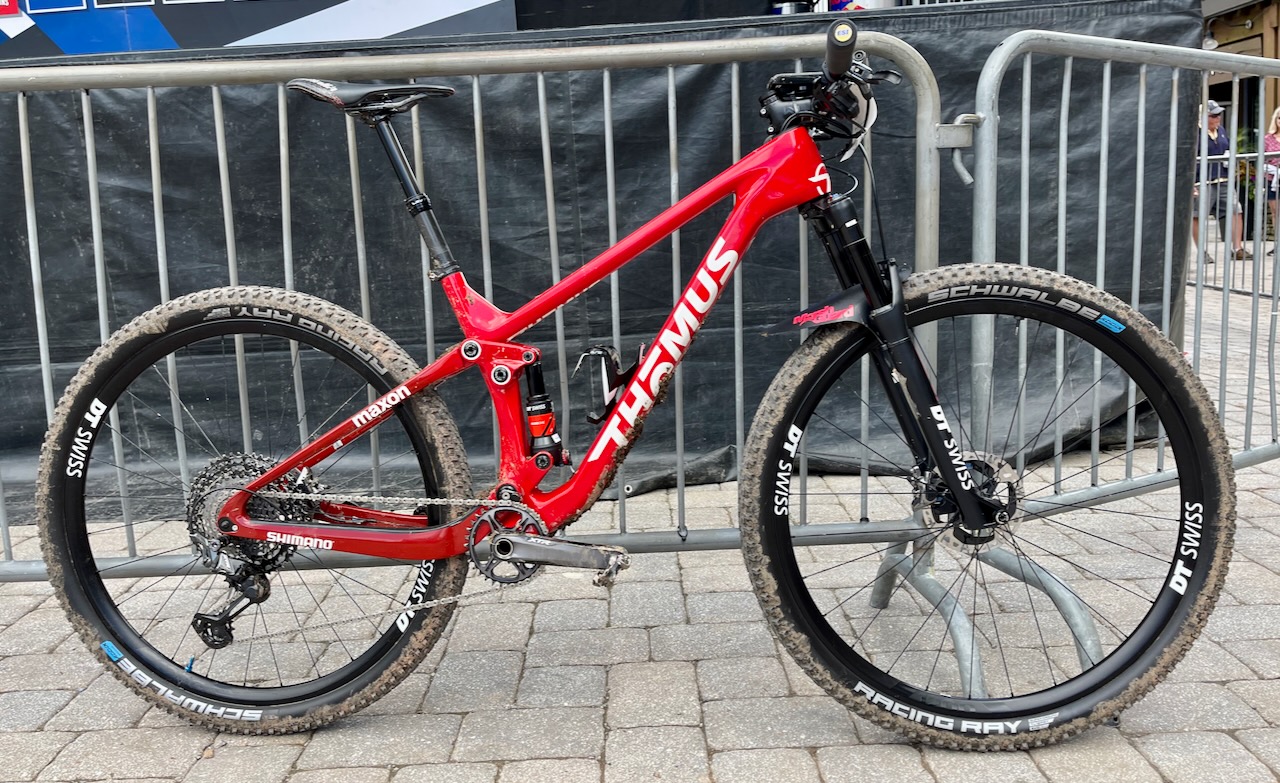 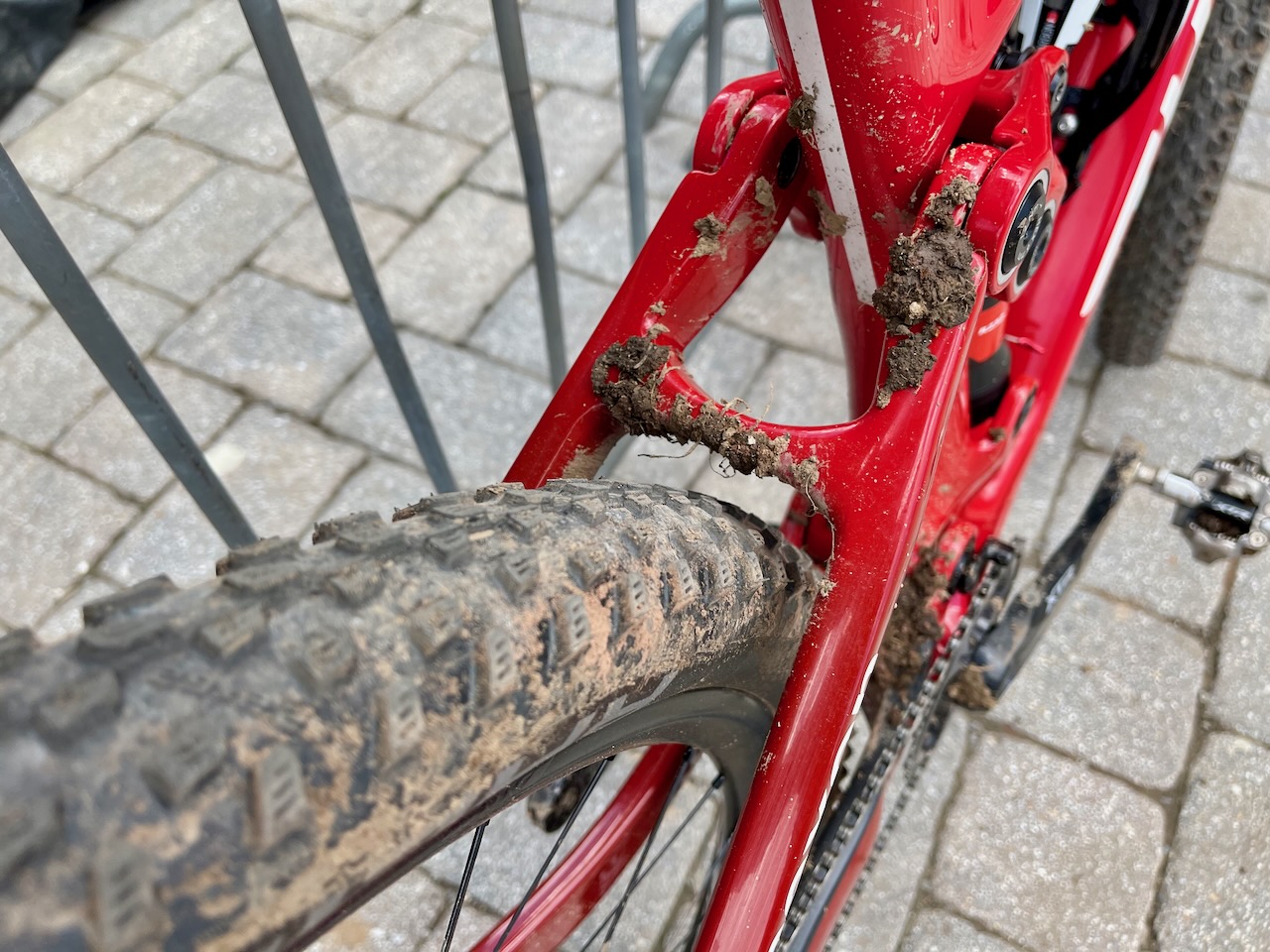 For the World Cup, XCO Keller went with Schwalbe Racing Rays, same for the short track. For gearing, Keller went with a 32T front chainring and 10-51T 12-speed rear. The tire has an excellent open tread that allows maximum mud shedding and sharp knobs to bite. 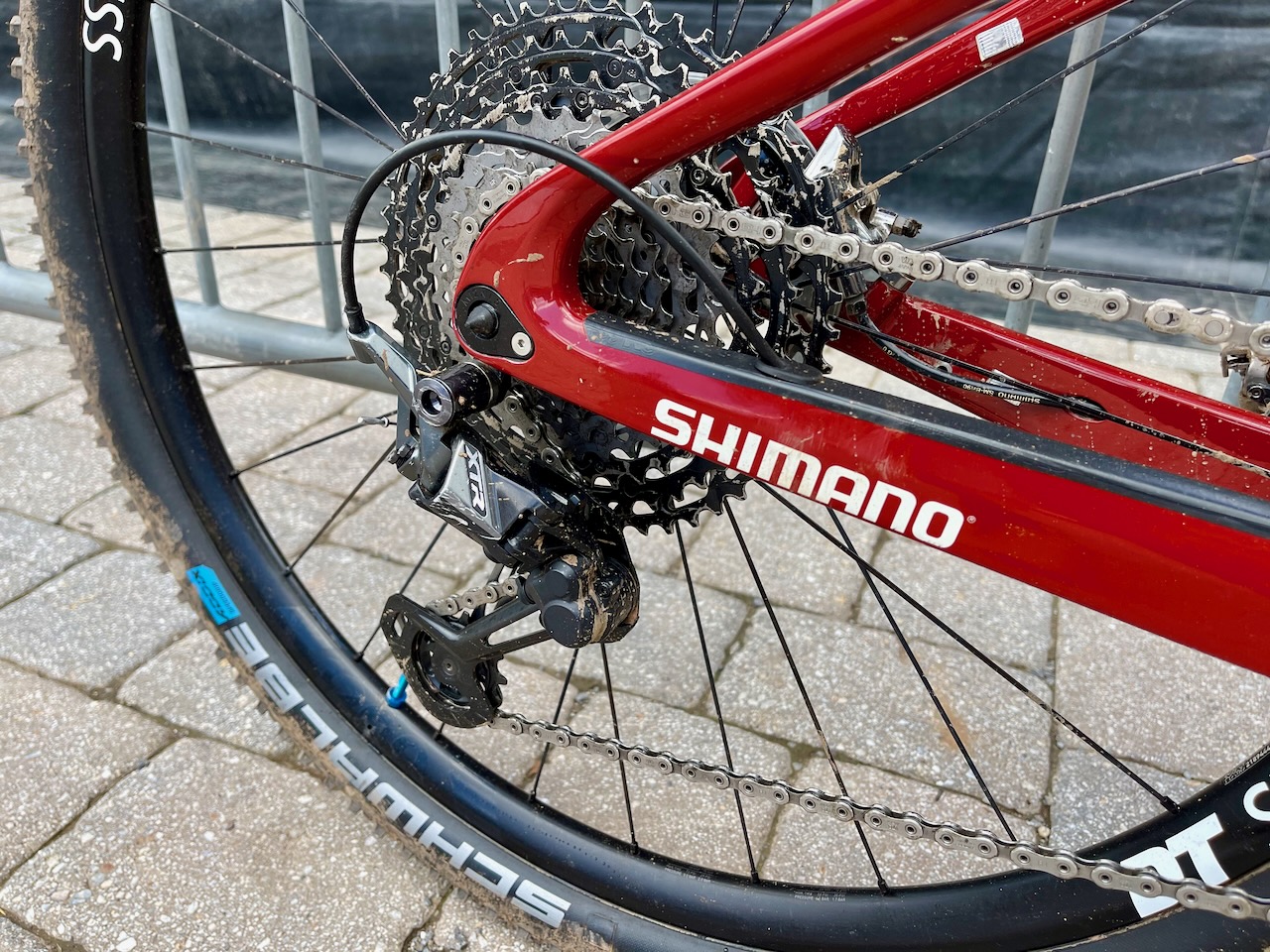 A combo like this would allow her to grind up any mountain without having to get up and sacrifice rear wheel traction in the slippery mud. 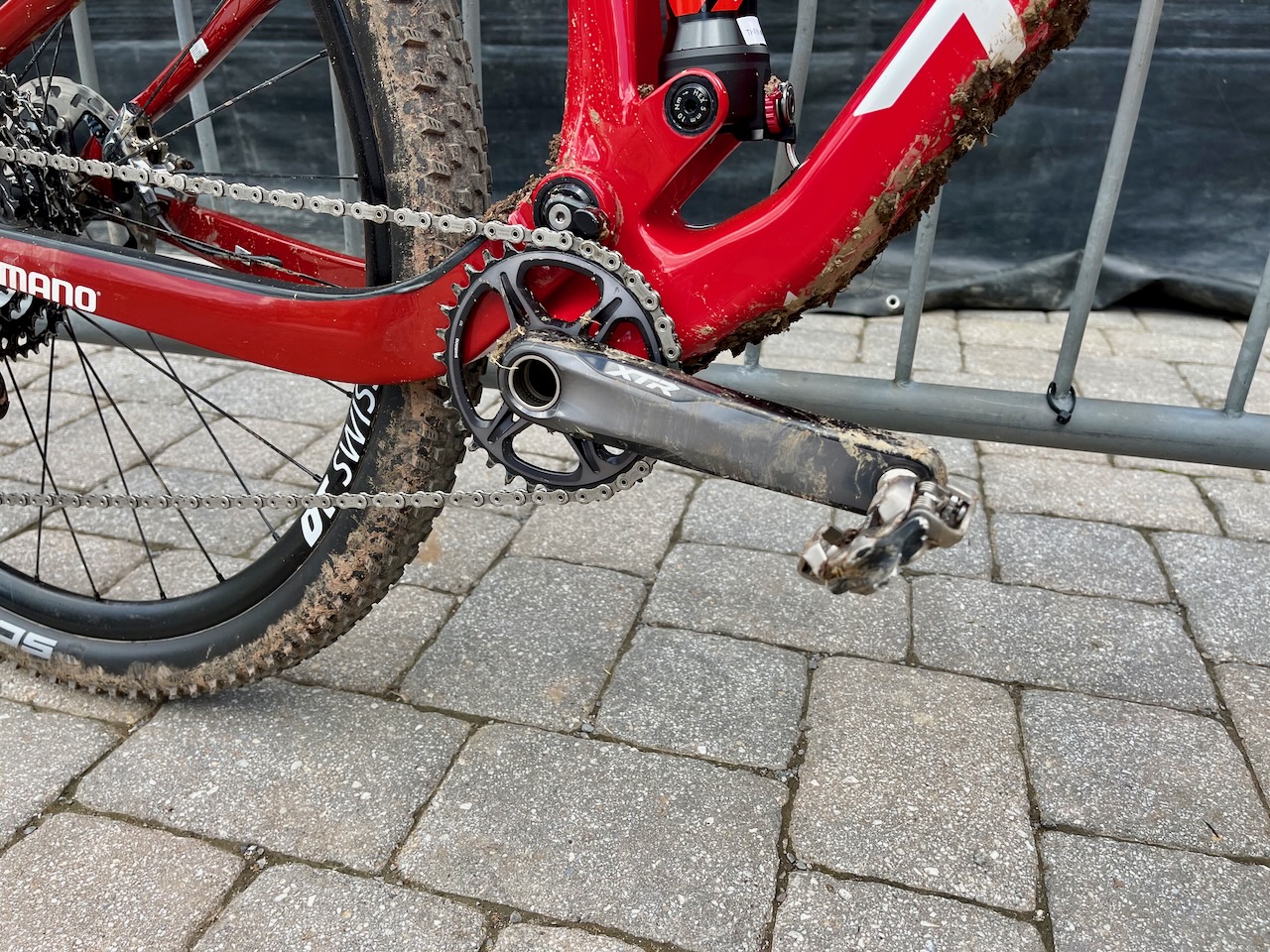 The Thomus Team runs all DT-Swiss suspension, which is different from the FOX suspension in which the Lightrider World Cup arrives. 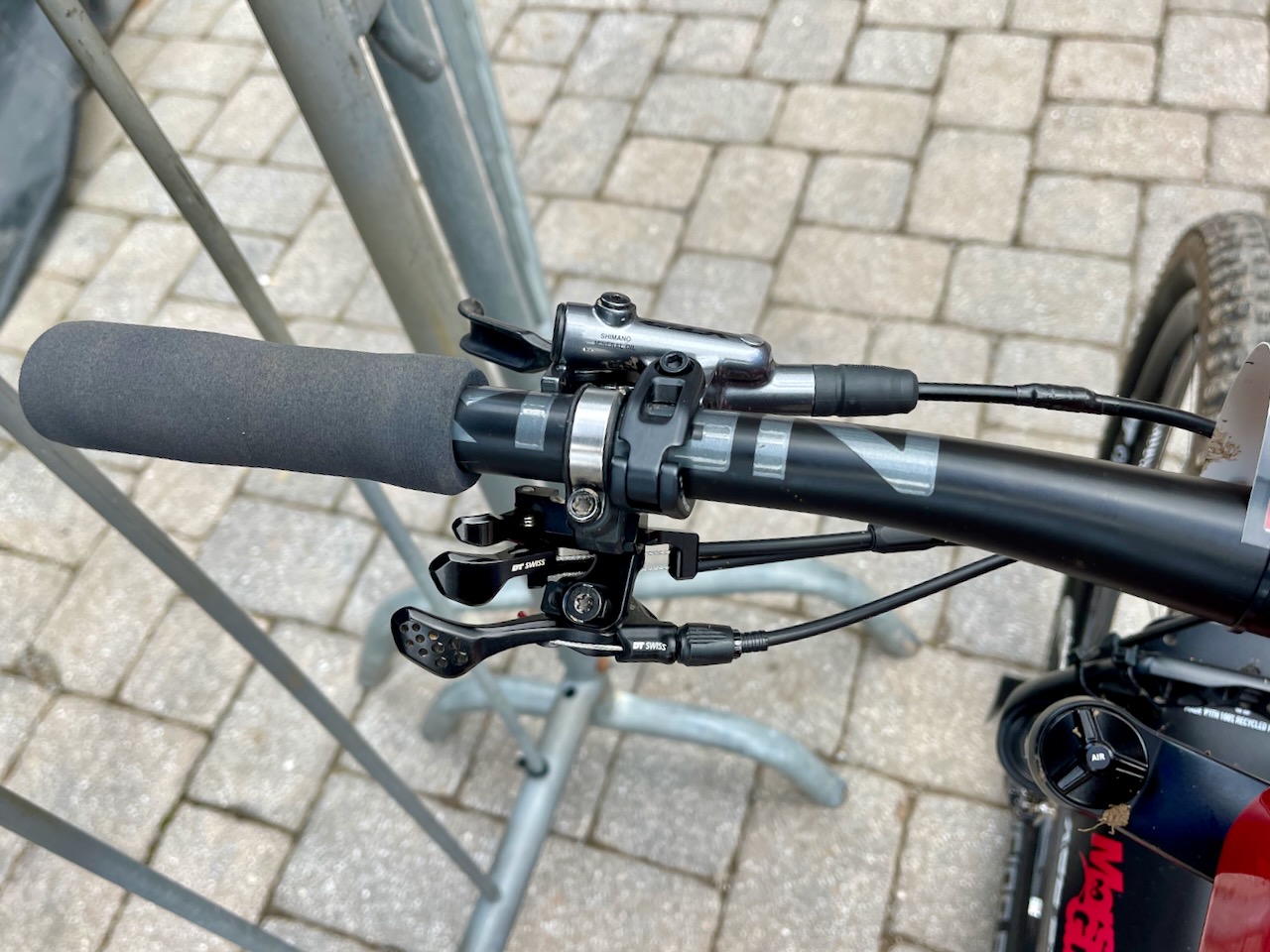 The Thomus Lightrider frame is a beautiful racing red color scheme with classic white paint elements. The glossy paint shed mud well, or Keller was going fast enough to shake it all off. 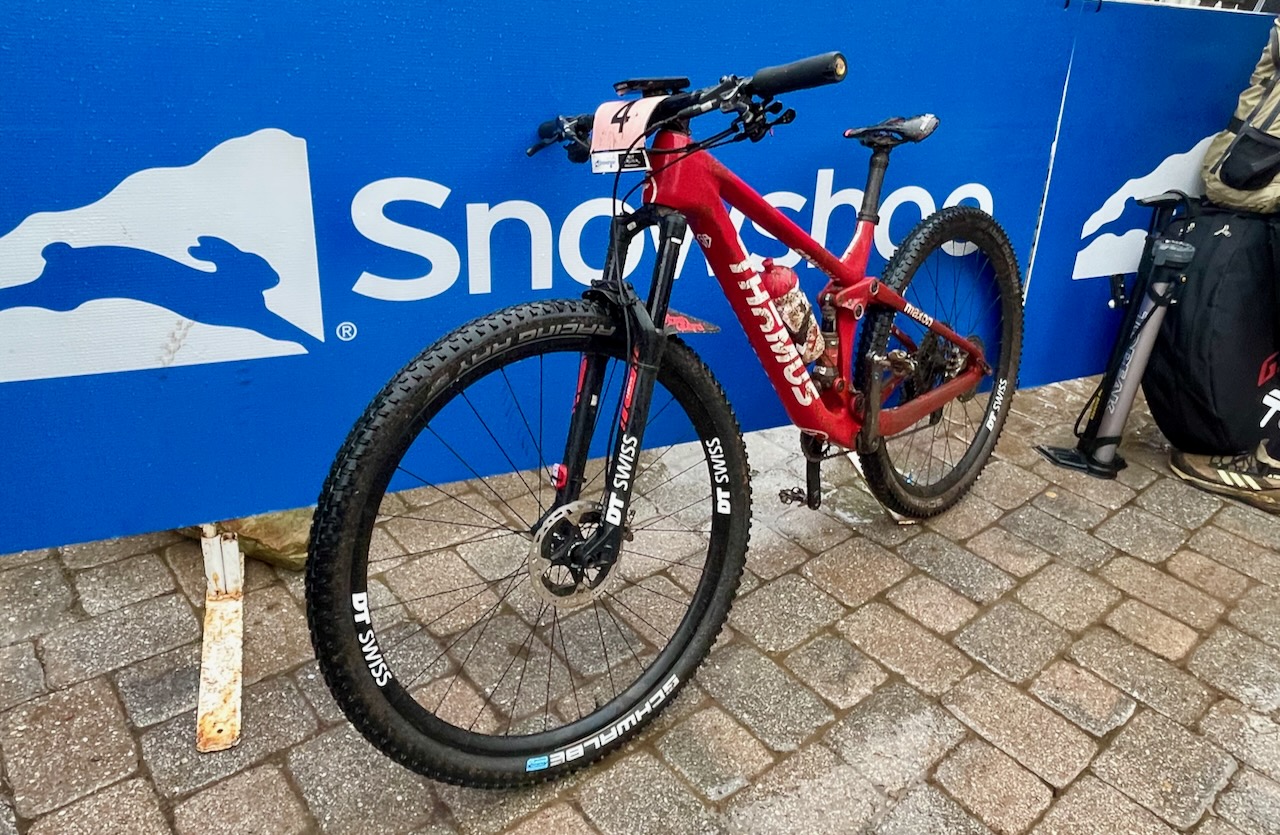 Thanks for sharing. I have become a big fan of Keller this season because of the obvious hard work she puts in and the super aggressive “leave nothing out there” style of racing she brings. It has made for some fun, fantastic racing to watch!

I think she made a lot of new fans this year. For good reason shes kicking ass!

Alessandra‘s team mate is Mathias. Lukas is Mathias older brother and he isn’t racing anymore but coaching his own XC team.

What about the bike’s weight? That’s as crucial as the other info. Frame size? Width of bars? Crankset arm length? Tire pressure she plans to use? Tell us more than the superficial.