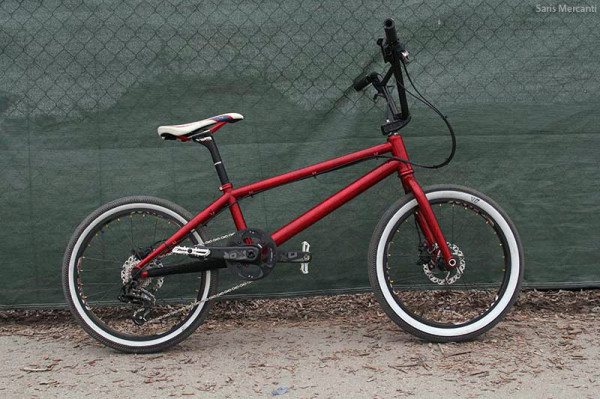 The term pit bike has its roots in motocross, where people often use small childrens’ bikes to cruise between the various staging areas at races. The term is now used to describe any variety of small childrens’ bicycle or motorcycle used to cruise the pits or injure yourself while drinking and dicking around.

While the renaissance of pit bikes was in the early-2000s, when even bicycle manufacturers like Foe’s Racing jumped on the trend and created trick components for the tiny tot motorcycles, it’s rare to see anything particularly spectacular these days. So we were incredibly impressed by the little red kids’ bike lurking in the Hayes Booth.

Can you spot what makes this pit bike so special? 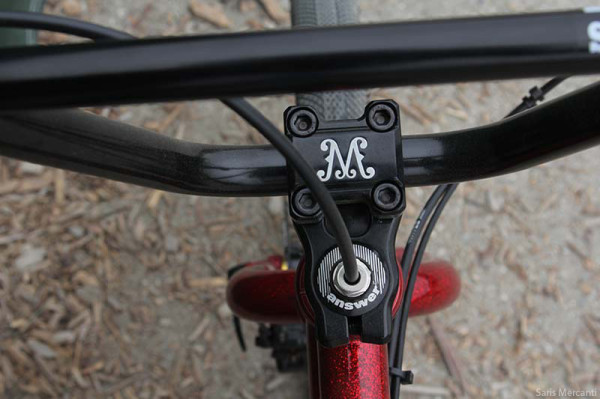 Designed by Jon Wells,  an accomplished racer and freestyle rider, the bike was custom built to fit his giant frame. The TT is an almost unheard of 22″ and the chainstays are also on the longer side, because of his racer boy background.

The hydraulic brake cable is routed through the stem and internally through the fork to give Jon the clearance for bar spins and X-ups. 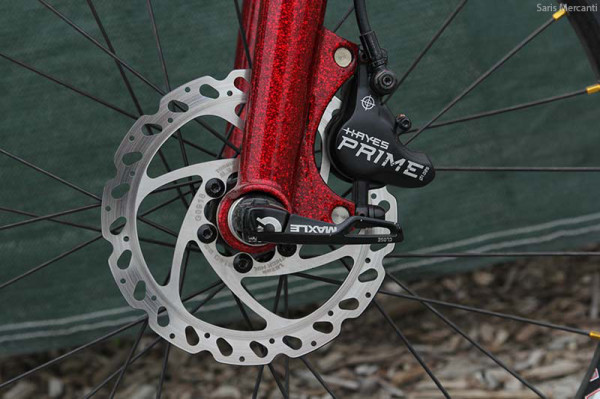 The entire bike was custom built by Mike from Profile. 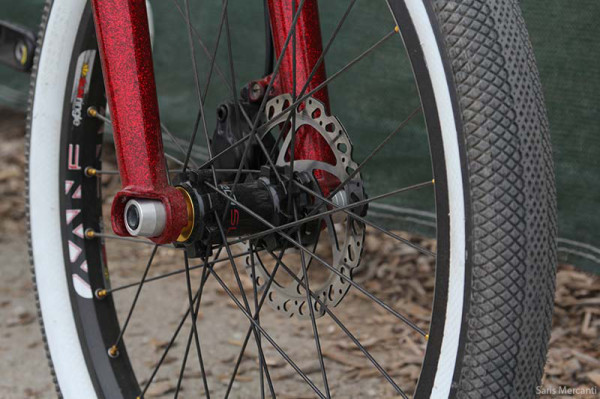 While some BMX manufacturers are starting to play with the concept of disc brakes on race BMX bikes, Jon decided to go full mountain bike. In addition to front and rear brakes, the bike has a tapered headset and a 15mm fork with a  Maxle QR. 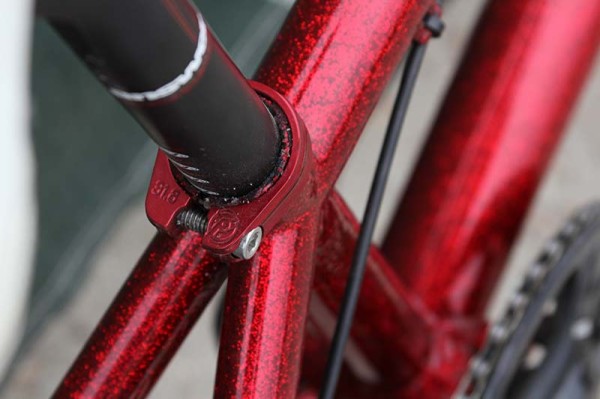 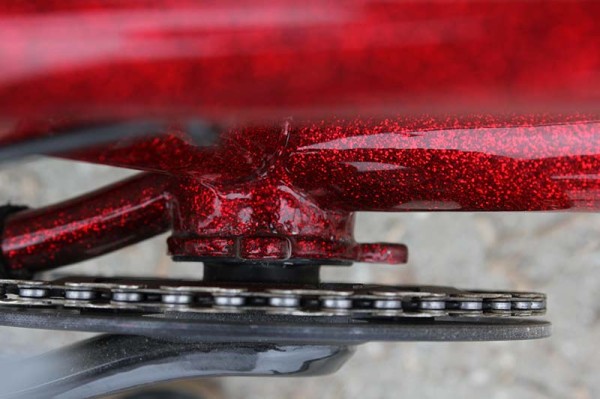 In the back, the bike borrows ISCG05 tabs and a GXP BB from mountain bikes. 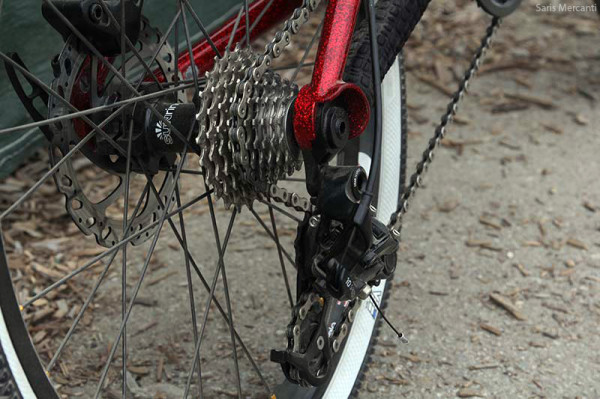 A 10 speed SRAM shifter mated to a road cassette keeps Jon in the perfect gear for everything from gate starts to all day wheelies. 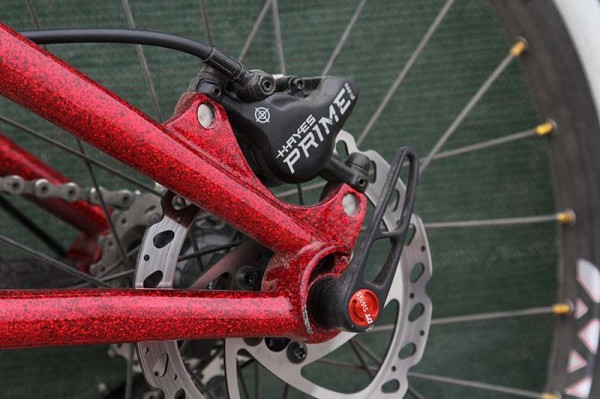 As an employee at Hayes, his bike was completely decked out in the company’s various component lines. Everything from custom wheels (Sun Ringle disc hubs laced to Sun Envy rims), to the perfectly bled Hayes Prime brakes. 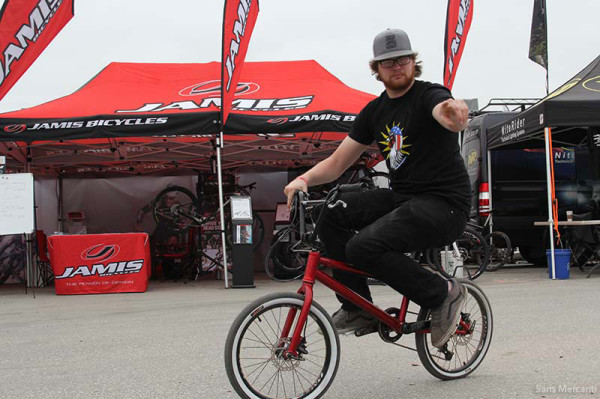 Special thanks to Jon for creating such a rad bike and taking the time to share it with us!

Such a cool bike!

You’re not the only one….BMX bike + XC Descent….

Uhhh…: “the Renaissance of pit bikes was in the mid-20s.”

I imagine that Saris Mercanti, the author, meant to write “mid-2000s.”

Who’s editing this stuff? Anyone?

You’re right JasonK, I demand my money back!

@JasonK
If you were paying a subscription, I could see why you would care so much.

Awesome playbike – what tires are those?

While I admire the creative genius and the insanity in some of these bike’s uses, and the gadgets, gizmos, and newest thingy’s…I say thanks for the share!
I am a 52 y/o Diabetic w/ a WALMART Mountain bike that was going curbside. I took it and with a little TLC and scrubbing that I use for leisure riding to fishing holes, minor trail exploring, and pedaling My old butt back into better shape. (i found out smoking and biking DO NOT work well together…DUH GRINS)
Reality of things, while I will probably never have any of these fantastic bikes, and economics aside, I highly admire the engineering creativity and brilliance along with the astonishing skills and feats riders push these creations to.
Thanks for the info, the posts, and the chance to say thanks.

@stratosrally, the tread looks like a Vee speedster….have non whitewalls on my kids mini and my cruiser, good modern BMX tires.

GXP bottom bracket? GXP is a crank axle size – not a BB size. If anything, that thing probably has a standard BMX bottom bracket with an adapter that fits GXP cranks.

suuuuuper nitpick time: I don’t think those are ISCG05 tabs. ISCG05 Tabs are not flush with the end of the frame BB shell, they are 2.5mm recessed toward centerline.

other than that, its an interesting bike.

The only thing missing to make it the “ultimate” pitbike is

this is truly wonderful, want it and hope this will be a standard soon. anybody to say how to get the fork please? one thing: bar spin? (if was able) I would go for not hydraulic on the back and gyro or likes…hammersmith crank for clearance? thank you..bo-bri Italy