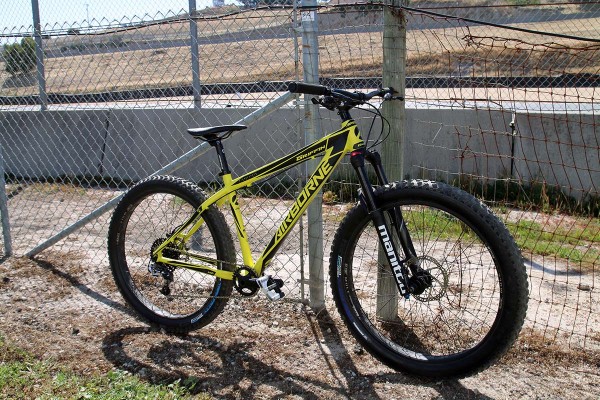 There is no denying that plus sized tires were a big thing at Sea Otter this year.  Whether you look at them as an addition to the evolution of mountain bikes or a branch in a new direction that has been growing for a few years now, there were a number of new bikes to check out.

Even though multiple bike manufacturers are exploring plus sized options, how each company is translating that into a finished product turns out to be quite different. While some companies like Trek are sticking with 29+ as their only options, other brands like Airborne are skipping over 29+ and going straight to 27+.  As Airborne puts it, the new Griffin was meant to be an aggressive XC hard tail with a bit of BMX influence to create a super fun and capable bike built around the mid-fat wheels and tires… 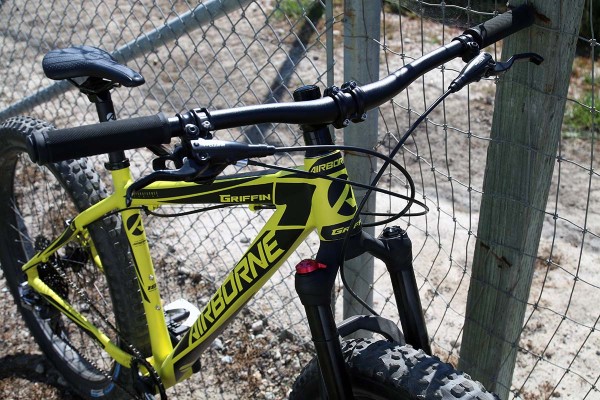 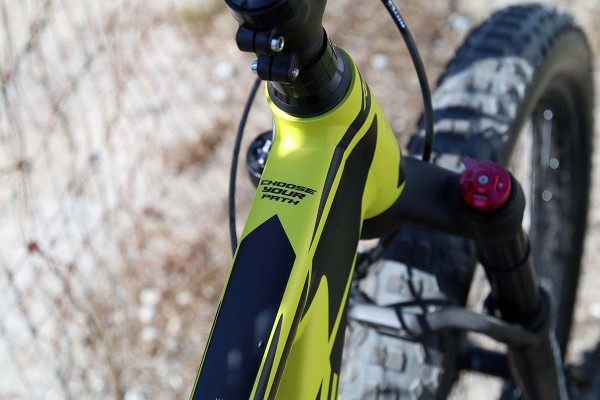 As one of the first bikes to take advantage of the new Manitou Magnum Plus suspension fork, the Griffin runs 27.5×3.25″ tires with the fork set at 120mm of travel. 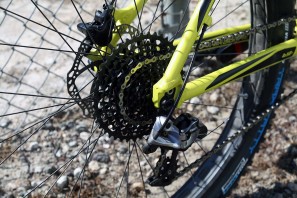 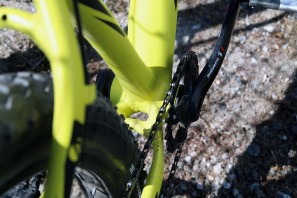 Taking advantage of the Boost 12×148 rear spacing and 15×110 front spacing, we’re told that the Griffin is built with enough tire clearance to run 27×3.5” tires whereas most of the other 27+ bikes currently top out around 27.5×3. To accommodate tires of that size the frame includes a 69 degree head angle and 450mm chainstays with massive clearance. 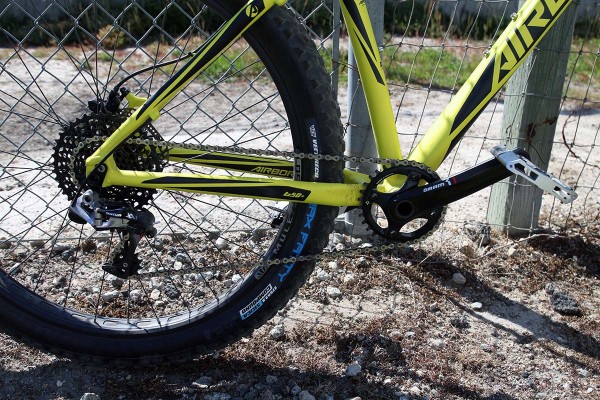 Positioned to be one of the first consumer direct bikes in the 27+ category, the Griffin will be sold direct along with Airborne’s other models. Speced with a SRAM GX1 1×11 drivetrain, Sun Ringle MuleFut 50SL wheels, and the Manitou Magnum Comp suspension fork, and Vee Tire Co. Trax Fatty tires, the Griffin will sell for $1999 complete and will be available in June. Airborne also mentioned that the Enduro bike that we’ve seen in prototype form will be available around Interbike.

Is anyone at Quality/ Surly getting royalties on all this “+” business?

I get a dollar anytime someone says “Surly”

I’m not sold on this 27.5+ notion. Sure it makes a 29er frame potentially more versatile, but other than an accessory option I see 27.5+ being a race specific model. Nightmare XC conditions and more confidence in DH. It certainly doesn’t have the same cruising and speed benefits of 29+, and of course 27.5+ is not a fat bike. You wont get the same float as a full fat.

I’d sooner own a fat bike and be done with trying to have a one-for-all bike.

I feel like we’re back in the late-90s when suddenly hardtails had enough space in the rear triangle to run DH sized tires (Which were 2.3″ at the time)

Innovation is suddenly, “We can fit wider tires than you!”

The added compliance and grip with all these plus sized bikes is great, however remember that each tyre weighs around 1kg each… I just can’t get my head around riding such a heavy wheel.

Are catalog bikes catching up this fast?

I can’t believe 26 actually was abandoned for this crap

Fat bikes are great for where they can go but the Q Factor causes tons of problems for a lot of people(not all obviously), especially if they log a lot of hours in the saddle. I’d definitely be willing to give up a bit of float for the Q Factor of these bikes, they may even help you maintain power longer and make up for some of the loss of float and traction. There will be 4″ 27.5 tires very soon. I think they will out-float most 26×4.5 tires…probably not the 5″ tires but for most conditions, it would be a worthwhile sacrifice.

Link, please. Any BR writer should go through a check list: spell check, weights if poss., price, link at bottom. The brands would appreciate it also.

Racing, and DH in particular is actually going to serve more to keep these + sizes at the recreational end of the market. They are objectively slower and less precise, and a quick brush up on DH history will show experiments with wide rims and tires (doublewides, gazzas) eventually were vetted out. Most racers are on 2.3s these days. They don’t float, they cut, and more importantly, they roll fast and hold their shape under hard cornering.

Well, when I first heard of 27.5+ I thought neato, but now I’m more meh, lol. The only reason that I thought neato was because I don’t own a fat bike yet, and I got away with riding my 29er through a lot of this winter.

Once I own a high quality light Fat I see no reason for 27.5+. However with Trek introducing a 27.5 full fat I just might have to wait one more year before I pull the trigger on a fat bike.

from an experimentation point of view 27.5+ is pretty cool, but for recreational users and for the bike industry at large… I’m not sure this is a great direction to focus much on.

Almost a year ago, I emailed Surly and asked when their 27.5 Surly Knards would come out. Eric @ Surly said no plans. Surly, am I a f*ing genius, or what?

Airborne actually has some really good stuff for the money but they seriously need to stop paying their graphics guy by the pound, maybe they would sell better. Their bikes are just flat out ugly.

B+ would be a great fat alternative for a smaller/lighter rider like a kid or a lady who doesn’t need 4″ flotation. I’m a bigger guy, but I still don’t want the Q-Factor of a 100mm BB, if for no other reason than I hate it’s incompatibility with other bikes.

After reading a gazzilion threads of opinions on plus size vs fat tires vs 2.3 or standard sized mtb tires. I have had a chance to put some miles on all platforms and I feel the need to share here. standard mtb tires are fast yes….but they have no float and hardly any cushion.
All plus size tires are still FAST! They are only slightly slower than traditional tires. But in a race with all conditions or varied conditions the Plus sized rider will have huge advantages….grip/flotation/comfort…And in turn the true fat, 4 in. or wider tires will have even more performance advantage in soft sand and snow conditions. Once riding plus sized and fatbikes I can’t go back to pizza cutters. My personal favorite for riding on southern America are the plus sized tires. Just look at Chumba rider Joey Parent’s tie for first place as a testament to the capability of plus sized tires.

Forgive me i was refering to Joey Parents tie for first place in the Trans Georgia race.
I think he was the only guy on plus sized tires.