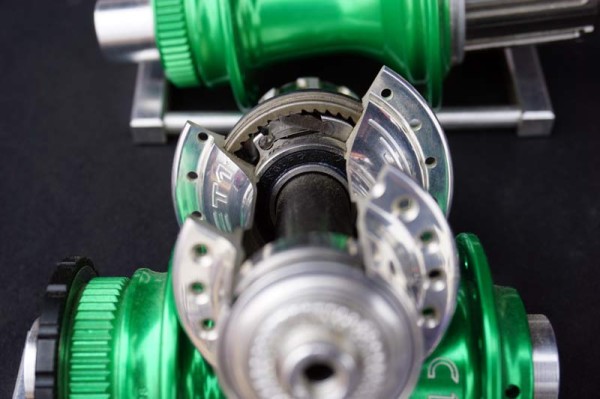 If you recall our NAHBS coverage of White Industries, they showed an early prototype of some new 6-bolt hubs. Now, they have a name and Alec White was ready to reveal the new internals.

A new pawl mechanism doubles the number of teeth on the ratchet ring and puts two teeth per pawl. That not only doubles the pawls’ grabbing points for better bite, it also doubles the possible points of engagement to 48. The result is a snappier 7.5° engagement, half of the originals.

This new pawl and ratchet system will launch on the new XMR (‘Cross / Mountain / Road) hubs, which will replace the MI6 and CX11 as the 6-bolt offering. 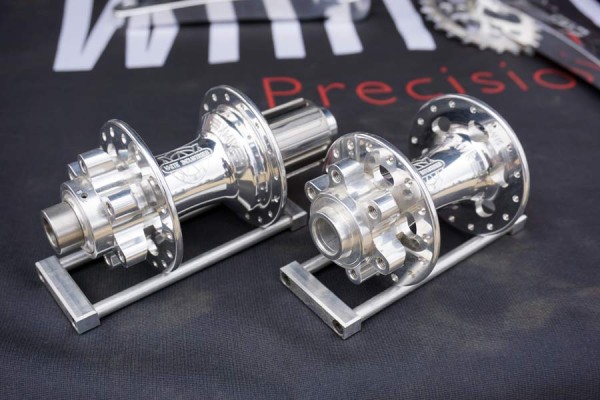 They’ll probably only offer the higher engagement on these XMR hubs at first since it’s louder, but if there’s demand from roadies, they could do it there, too. 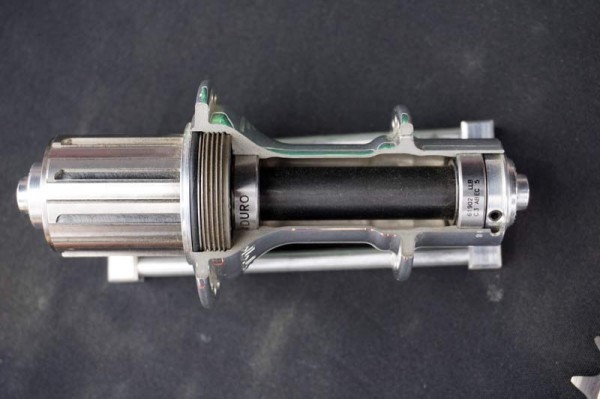 It’ll also be retrofittable to any of their hubs going back at least 20 years. Before that, there was a different thread pitch on the ratchet ring so the new ratchet would be incompatible. 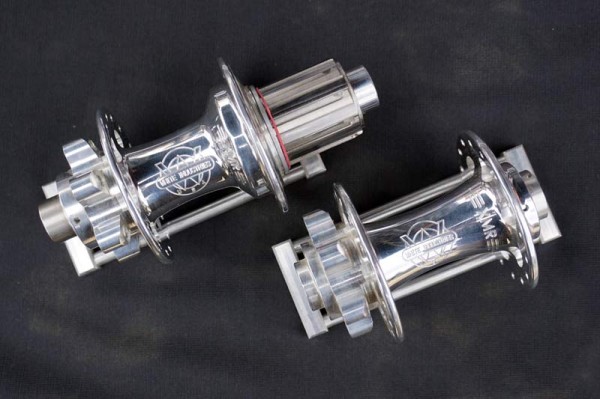 It’ll have QR or thru axles to fit any current bike with standard axle spacing. Boost widths are coming. 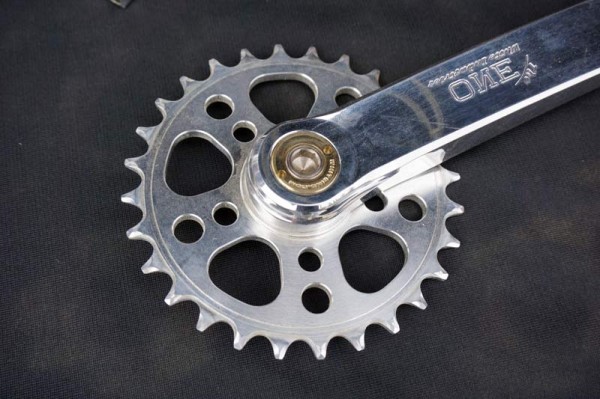 Their narrow wide ring is ready for primetime, more details on this from our NAHBS coverage, too. Hint: It’s only for their cranksets.

Hah. Just hours ago I made the decision to have a new set of wheels built with i9 CX hubs over WI CX11’s simply because of the engagement difference. Oh well, not like I really downgraded when we’re talking about i9’s.

I’ll cast a vote for the upgrades to the rest of the hubs for us disc brake holdouts.

@Ck, word is these XMR’s won’t be available until end of the year after Interbike so you’d be waiting a while. Cant miss with those I9’s, 60pt/6deg engagement is pretty dang fast. You could basically throw a dart at a map of US hub mfg’s and whatever it lands on you win.

The finish is good, but the structure is boring. Putting the supporting bearing to the left of the freehub body is not a decent way.

“retrofittable to any of their hubs going back at least 20 years”
That’s ridiculous. Didn’t White get the memo that planned obsolescence is mandatory in this industry?

OK, it seems no one else is going to say it… Why does a hub that gorgeous and expensive get some of the crappiest, barely-rebranded Chinese radial cartridge bearings available? Does White just order bearings from QBP?! Spec some NTN or SKF that’ll last longer than three weeks, and I would consider getting on board. ’til then, I’ll stick with DT, King, Shimano, Campy…or any number of other hubs that don’t come spec’d with throw-away bearings.

Matty – yeah, that didn’t read quite right, did it – I just reworked that sentence.

@SB, so you replace the Enduros with SKF for $7 a cartridge and 10min swap time like I did with my CLD’s and call it a day. You mad bro?

@SB–maybe no one else is saying it because people who ride WI don’t have problems with bearings. I’ve replaced WI bearings but each time it was due to rider error and not OEM spec.

Has it really come to this? I’ve always found this pissing contest about loud hubs to be embarrassingly juvenile.