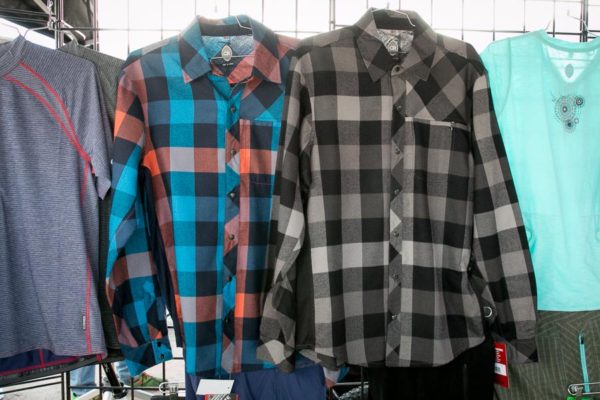 Among the countless tents full of new bikes and bike parts at Sea Otter, there were also quite a few that were full of clothing. At this point in the season, most of the spring/summer styles have already been released and are just starting to hit the market so it’s a great time to show them off to the public. In our case, it’s also a chance for companies like Club Ride to give us a sneak preview of the coming additions for fall/winter 2016/17. Club ride continues to refine their line up with new colors, additional more modern styles, and some interesting concepts for women headed to spin class or just to the gym… 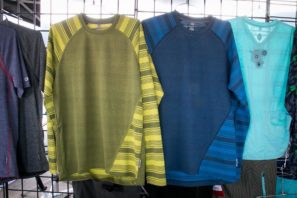 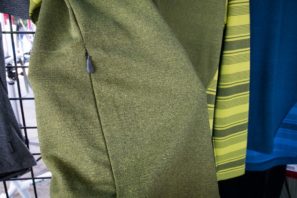 Part of the evolution of Club Ride has been the realization that the same styles aren’t as popular in different places across the country. Club Ride’s casual Western look has always been a hit in mountain towns, but the brand has struggled to gain traction in more urban markets, specifically in the East. To address that, many of their pieces are starting to be offered in designs meant to appeal to different markets, but also younger riders as well. Pieces like the Shaka Flannel which is the same as the Jack Flannel, just in more traditional buffalo plaid and in Rincon Blue or Zuma Grey.

Club Ride is also introducing the Baron jersey which uses a mid weight polyester knit fabric to provide a warmer option without going full heavyweight. The jersey has a hidden pocket on the side seam with a zipper and a media port wand will be sold in Sulphur or Saphire. 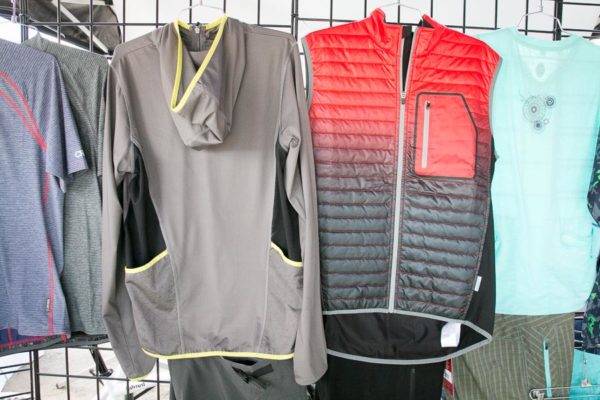 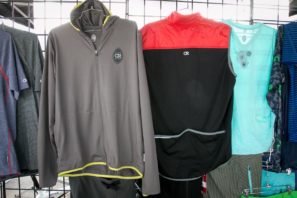 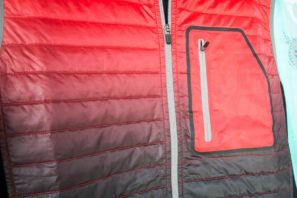 Other new pieces include the Infinity Hoody and Blaze Vest. The Infinity blends a standard hoody fit with more cycling oriented rear pockets with 2 massive drop in pockets at the rear, and hand pockets at the side. The vest on the other hand uses an 80gm synthetic insulation with a rip stop face and brushed polyester rear panel for warmth up front and ventilation out back. The vest also has two large drop in pockets out back plus a zippered chest pocket . 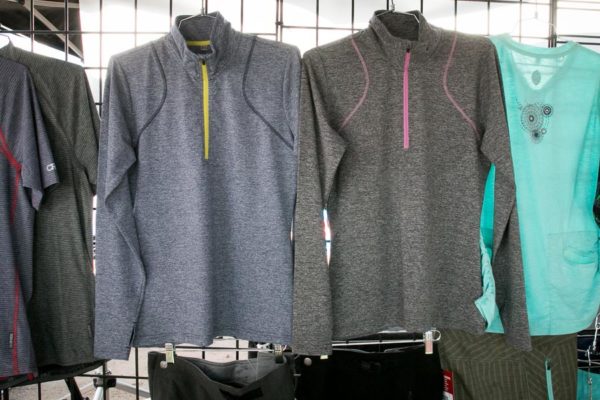 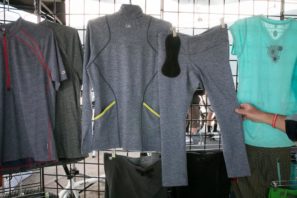 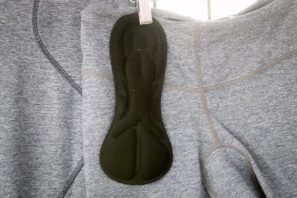 Looking to offer something not necessarily for the cyclist, but for women headed to the gym, the Jersey Girl top with Double Time tights take a pretty novel approach. Mike and I had a good laugh about what comments the Double Time pants would generate, but the idea is that they are both yoga tights and cycling tights. The chamois is removable so you can use it when you want to hit the spin class, and take it out when you don’t. It may not look like much, but the chamois is a 6mm triple density, anatomically shaped pad with an anti-microbial finish that is of course machine washable.

The Double Time pants will be offered in two colors to match the two Jersey Girl tops to make a complete outfit. Pricing and availability on everything above to come this fall. 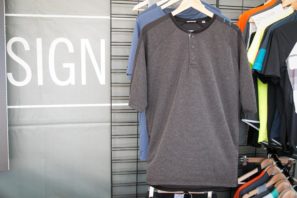 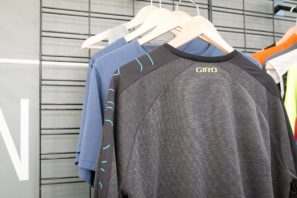 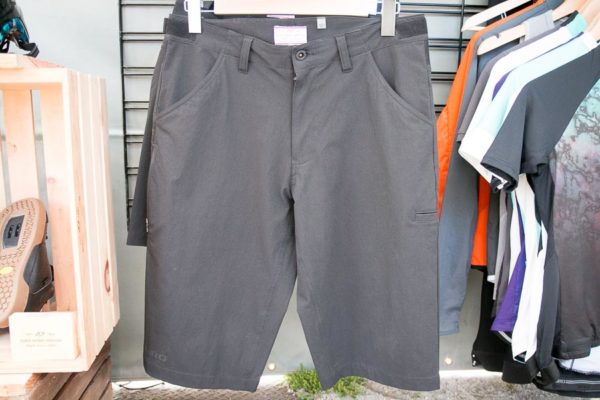 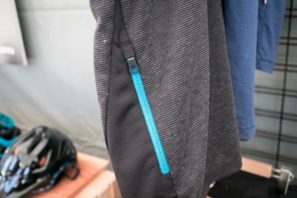 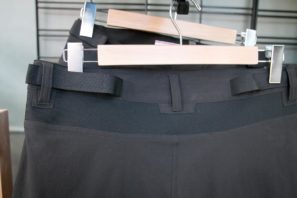 Over at Giro, the brand’s mountain bike clothing is finally hitting store shelves. The Truant Short and Jersey are aimed a riders that want technical riding apparel without looking like a bag of skittles. Though there are still just a few pops of color to match your Giro helmet if you so choose. Colors are offered in black, and black – what you see is what you get. Pricing is set at $80 for the Jersey and $100 for the shorts which are sold without a chamois. 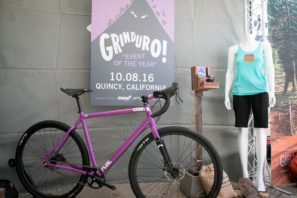 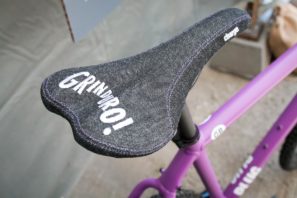 The other big news was the announcement of the Second Grinduro! which will be held this October the 8th, in Quincy California. The event was such a success in 2015, they expect it to sell out quickly, but as of writing this it looks like there are still some spots left! There might even be a second Grinduro! but the location has yet to be announced. 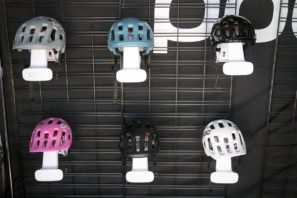 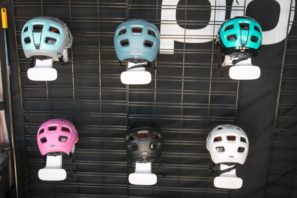 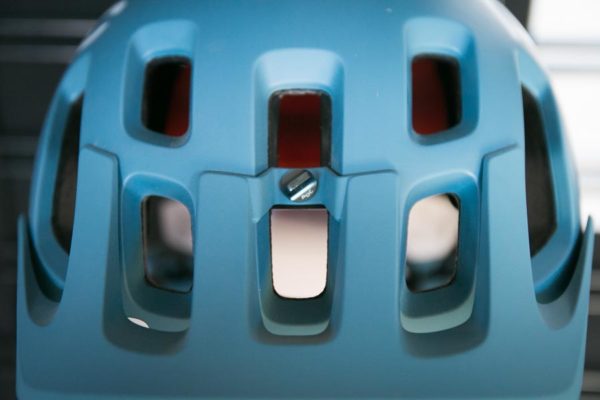 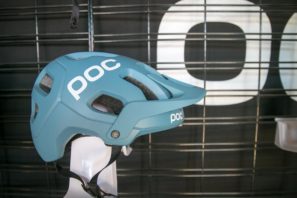 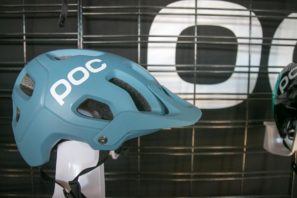 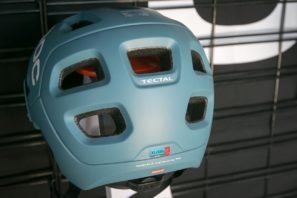 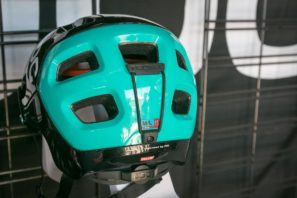 POC was another brand showing a few products that are now hitting stores. The Tectal is the successor to their incredibly popular mountain bike helmet. Think Trabec and the Octal road helmet having a baby. The result is the Tectal and Tectal race which come in at $190 and $210. Available now, both helmets have an adjustable visor with threaded lock, but the Race steps it up with a full Aramid reinforcing wrap around the shell (the Tectal uses a partial wrap), and the Race also gains a goggle strap and a tell tale two tone paint scheme.

One of the more Interesting features is the inclusion of a Recco chip that is molded into the EPS foam. At the moment that doesn’t mean a whole lot in the U.S. since the current Recco location devices have a pretty limited range and limitations, but according to POC, soon search and rescue helicopters will be equipped with a new Recco search device which will be able to scan search areas around 400 meters. All of a sudden that little chip in your helmet has a much greater chance of saving your life. 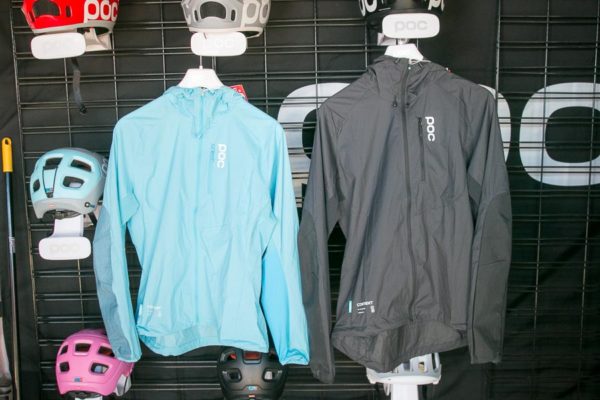 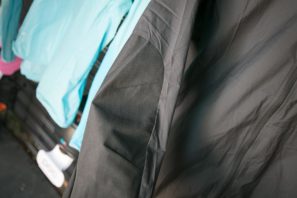 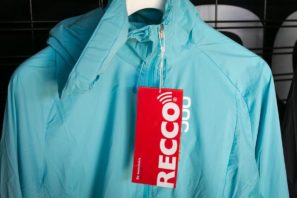 Recco reflectors are also found in other pieces of gear like the new Resistance Mid jacket. Following along with their Resistance clothing line, the jacket is a super light wind jacket but with reinforced sleeves that won’t tear the first time you elbow a tree. The jacket is still highly packable and will sell for $150. 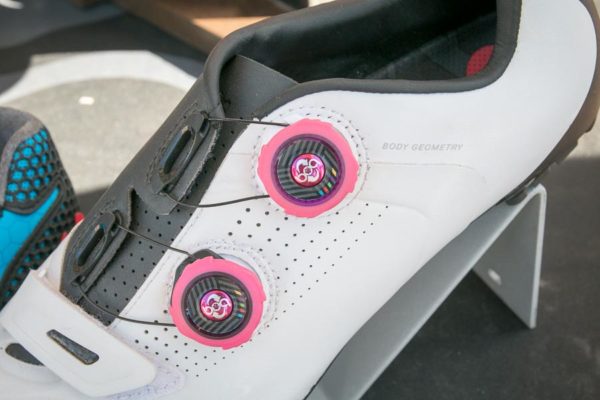 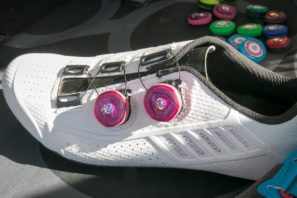 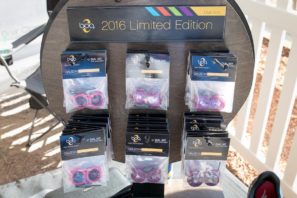 Finally, Boa was on hand to dial in show-goers’ shoes with fancy new pink dials. Clad in the colors of the Canyon//SRAM racing team, the dials are the first of 3 different custom Limited Edition colors that Boa will be offering at events for 2016. Better yet, they’re free – just show up at a participating event with your Boa equipped shoes to have them installed. The other two custom colors are TBD and the dials are available to fit all cycling platforms.