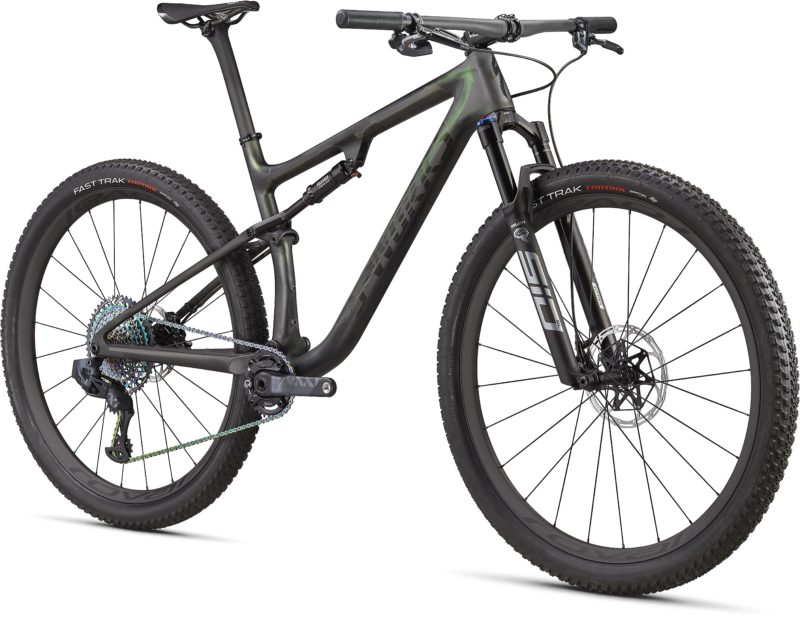 Since its inception nearly two decades ago, the Specialized Epic and its Brain suspension platform delivered another level in cross country race experience. No lockout levers, no hesitation – just pedal as fast as you can.

The Brain allowed Specialized to blend the efficiency of a hardtail and capability of a full-suspension bike. Over the years, the Epic achieved Olympic gold, over 100 World Cup wins, and podiums all over the world.

The newest iteration of this race machine proves to be as progressive as ever, and with the revised Epic EVO, this platform truly has a bike for everyone. True to form, the latest Epic continues the tradition—redesigned to redefine the cross-country race bike’s limits… Specialized redesigned the latest Epic from the ground up, ditching some of its distinguishing features of the frame and geometry to make what they call “the fastest mountain bike we’ve ever produced.”

Gone is the classic triangle near the seatpost, replaced with a stiffer shock mount, a new carbon rocker link, and Rx XC tuned shock.

Gone are the super beefy chainstays – updated with a more compliant rear triangle that’s also 15-percent stiffer than its predecessor.

For 2021, the Specialized Epic rolls out an all-new Brain system that is said to be more efficient, capable, and robust. The revised geometry reflects the ever more-aggressive nature of current World Cup courses and partners with the new Brain suspension to offer increased traction and stability at speed.

What is the Specialized Brain suspension? The Specialized Brain is, and has always been, an Inertia Valve that mechanically reacts to bump inputs to cycle the compression damping between open and locked out. It does this in a fraction of a second, and it’s become better and better over the years.

This lets the Epic have a firm pedaling platform when needed, and plush, capable travel when things get bumpy, all without the distraction of a lockout lever. Or batteries.

Re-engineered for the new Epic, the new Brain ensures every watt is translated into forward motion while soaking up momentum-killing chatter and the big hits. The 25mm stanchion, compact shock is centered around a firmer race-tuned pedaling platform, the Brain’s new Rx XC Tune.

The new platform was developed with close input from Specialized Racing athletes and is said to be even more efficient with improved damper adjustability. The Brain fork adjustability allows riders to meter out travel precisely to their liking from fully locked to 30mm sag with air-spring tunability. For the updated Brain, Specialized ditched the Auto Sag air pressure feature and increased the anti-squat to give the best pedaling performance possible. Designed hand-in-hand with the updated Epic frame, it’s also the most seamlessly integrated Brain yet. Working together, the relocation of the Brain allows for the repositioning of the rear brake caliper.

This new position allows for more vertical flex in the chainstay but also increases the sensitivity of the Brain’s inertia valve due to its location behind the rear axle. In concert with the new layout, revised internals result in less turbulent oil flow for the more consistent performance hit after hit, while also increasing durability race after race. To say the new Epic and Brain went through some testing would be an understatement. The engineers and athletes put in 1,850 field test hours, equivalent to racing 72 CAPE EPICS.

The new Brain boasts extended time between service intervals, 125 hours for the air sleeve, and 250 for the damper. Considering current recommendations are 50 hours for air sleeves and 200 for dampers, this is quite the improvement.

Specialized is now including two years of free service, in conjunction with key dealers in your area. Dealers will now have Brain shocks to lend out while you swap to get yours serviced. That means you can still train and race while your suspension receives some TLC.

There’s a Brain suspension fork, too

Let’s not forget the front end; the updated Epic line utilizes a 100mm travel, 44mm offset RockShox SID SL platform with Brain internals. The updated Brain internals allow for 0 – 30mm of sag adjustment for dialing in the perfect ride and updated bump compliance – Look for a how-to video on that later. Specialized claims the super sensitive and stiff Brain updates create the most sure-footed Epic yet. As far as frame updates, the Epics front-triangle stiffness remains the same to provide a balanced ride feel. Specialized focused on revised tube shapes, redesigned hardware, optimizing layup, and construction methods to allow for significant weight savings of the frame overall. All said, the FACT 11m Epic frame now matches the weight of the previous generation S-Works while the new S-Works Epic frame, aided by a carbon shock link, FACT 12m carbon, and a dedicated layup, shaves a further 100 grams. To keep maintenance simple, the frame uses a standard 73mm BSA threaded bottom bracket. Cable routing is fully internal, and the frames run a 12 x 148mm rear axle spacing. Inside the front triangle, you’ll find a spot for a bottle cage on the seat tube and on the down tube. While the seat tube uses the standard dual braze-on design, the downtube uses a three pack mount which should allow you to position your bottle cage appropriately, or mount other accessories.

Frameset weights include shock, hanger, axle, and bolts. All are size Medium. While the previous generation Epic Specialized experimented with modernizing the geometry, allowing the bike to breathe on downhills and sail off jumps, the newest Epic embraces that change and pushes past with an updated 67.5-degree headtube angle, more than a slight variation from the current models 69.5. The Epic’s updated geometry also sees bottom bracket height lowered by 9 millimeters while reach increased to allow for shorter stem lengths. The updated frame allows for wider tire offerings, accommodating a 2.3 rear and a 2.4 front comfortably. Adding that altogether; surpassed front-to-rear stiffness, lower bottom bracket, longer reach, slacker headtube and shorter chainstays (5mm shorter to be exact) – this bike will make any racer blush. The New Specialized Epic is available in four models, Comp, Expert, Pro, S-Works, as well as a frameset. Pricing for these ranges from $4,125 to $11,525 for the top of the line S-Works version. This rocket ship boasts a full SRAM AXS groupset, Quarq PowerMeter, and the newly updated Roval Control SL wheelset with DT-180 internals. Rumor has it that the stock S-Works Epic tops the scales at 20.5 pounds out of the box – more on that later. Plus, $25 of every bike sold is donated to the Outride Foundation.

Here’s a quick run through with first ride impressions. You can read our full review for more details on how it rides and detail tech photos, too! There are two sides to this Epic tale, and for those more trail minded, there is the all-new Epic EVO with 110mm rear travel and 120mm Fox 34 Step Cast or Rockshox Reba forks. Living up to the family name, the Epic EVO is firmly fixated on fast, but with more aggressive performance that’ll tame backcountry bushwhacking in record time. As the gap between trail and cross country race bikes continues to grow, riders looking to get more capability out of their bikes while still pushing the limits of lightweight and efficiency are increasingly coming up short.

The Epic EVO erases that void, coming in 300 grams lighter than its predecessor – this bike is XC light! In fact, without the Brain on it, it’s actually a lighter frame than the S-Works Epic! The latest twist on the Epic EVO formula, the new 2021 Epic EVO design process concentrated on increasing both efficiency and capability. Specialized aimed to create a bike for those competing against a field of two, themselves, and the trail. The Epic EVO gets a dedicated rear triangle that increases travel to 110 millimeters by reaping the Epic’s stiff-yet-light front triangle. Managed via new suspension kinematics, the increased rear end travel sees the introduction of additional anti-squat characteristics, ensuring the EVO’s increased capability doesn’t come at the expense of pedaling efficiency. Upfront, 120-millimeters of Rx Tune travel is tweaked to be a little more sensitive, and have more tire clearance. Component specs across all models thread the needle between lightweight performance and reliable capability. Dropper posts are standard across all models, while Roval carbon wheelsets and 4-piston brake calipers make their appearance starting with the Epic EVO Expert. The all-new Specialized Epic EVO is available in Base, Comp, Expert, Pro, S-Works models and range from $4,125 to $11,525 in price. Plus, $25 of every bike sold is donated to the Outride Foundation.

Looks like the newer Orbea Oitz minus the stupid brain shock.

“Gone are the super beefy chainstays – updated with a more compliant rear triangle that’s also 15-percent stiffer than its predecessor.”

Torsional stiffness perhaps increasing 15%, with increased vertical compliance? Either way, stiffness measured in some other plane/axis than compliance for sure…I would also like an elaboration on this, rather than speculating. Interest piqued.

I’m sure you’re right but I wish that whoever writes this stuff actually reads what they wrote and that the editor catches such nonsense.

did specialized write this? because this is great product copy

I’m not a Specialized fan but I like the direction they’re going with design. The Enduro’s makeover was long overdue now this bike! It’s mean looking, has that old round tube feel but with fresh clean edges to it, color ways are spot on. I hope it rides as well as it looks.

So will the new brain finally last more than a couple of months before needing a rebuild?