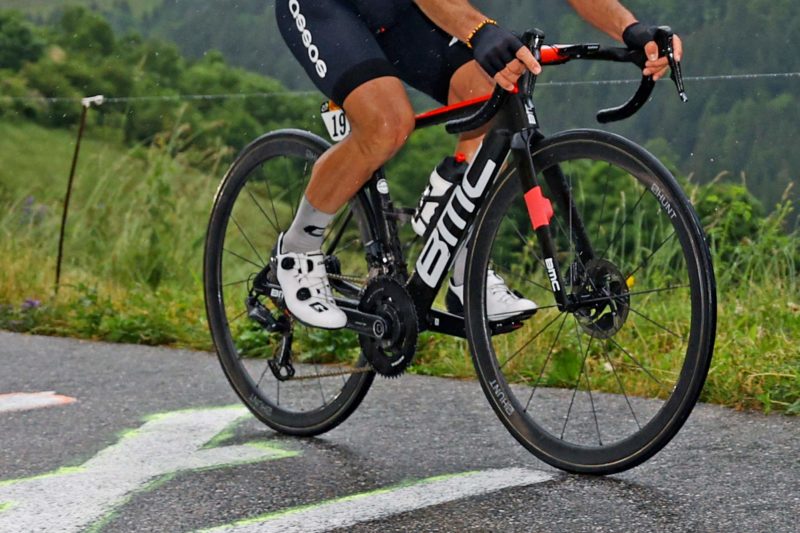 The Tour de France mountains have given us a sneak peek at another set of prototype wheels being tested, this time an ultralight set of low-profile Hunt Carbon Spoke, disc brake tubulars. Spotted under Colombian rider Sergio Henao of Qhubeka NextHash, the wheels combine similar lightweight, race-ready tech we’ve seen from the UK wheel company before, with a target of adding a lightweight tubeless version soon as well… 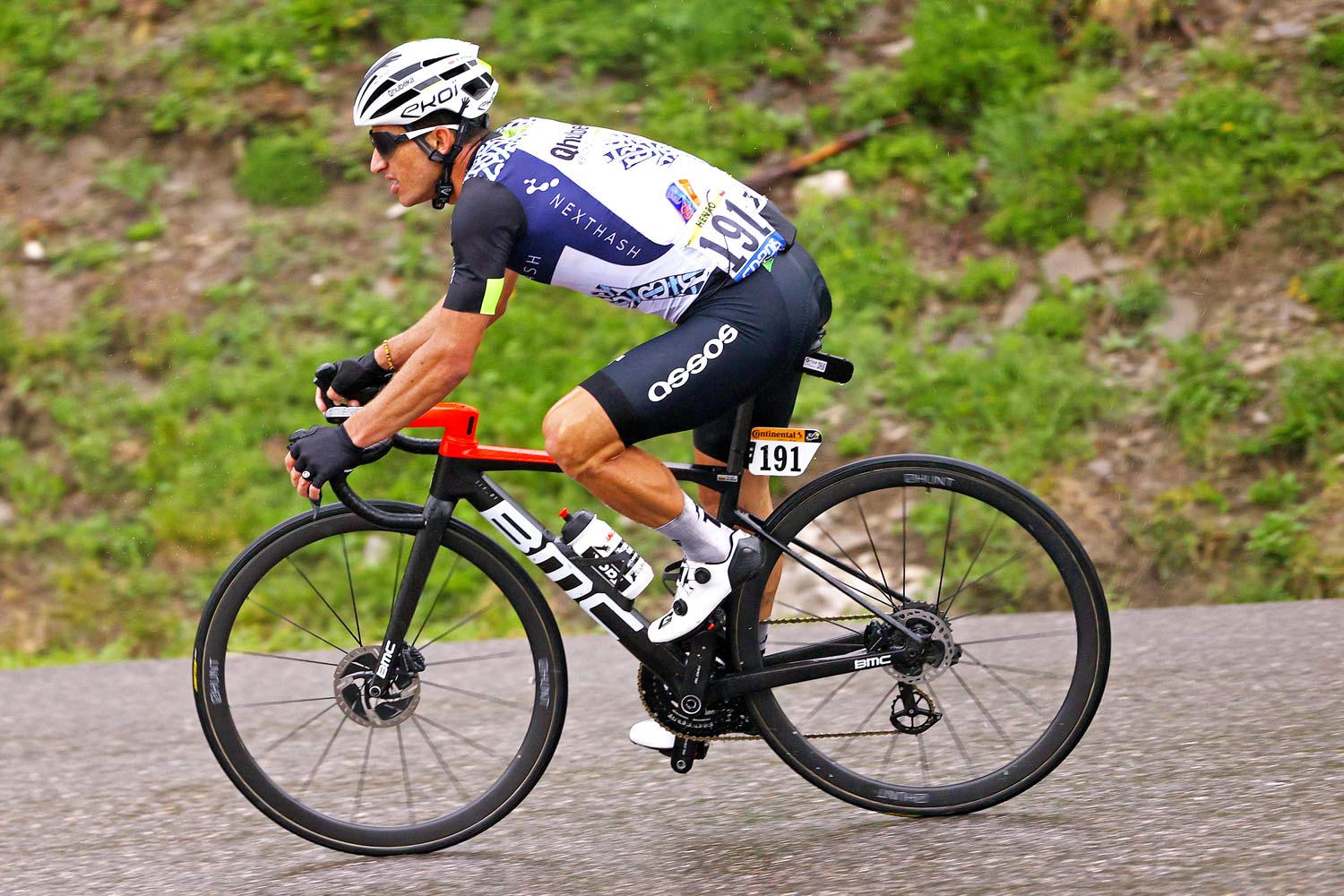 How light is ultralight with disc brakes? 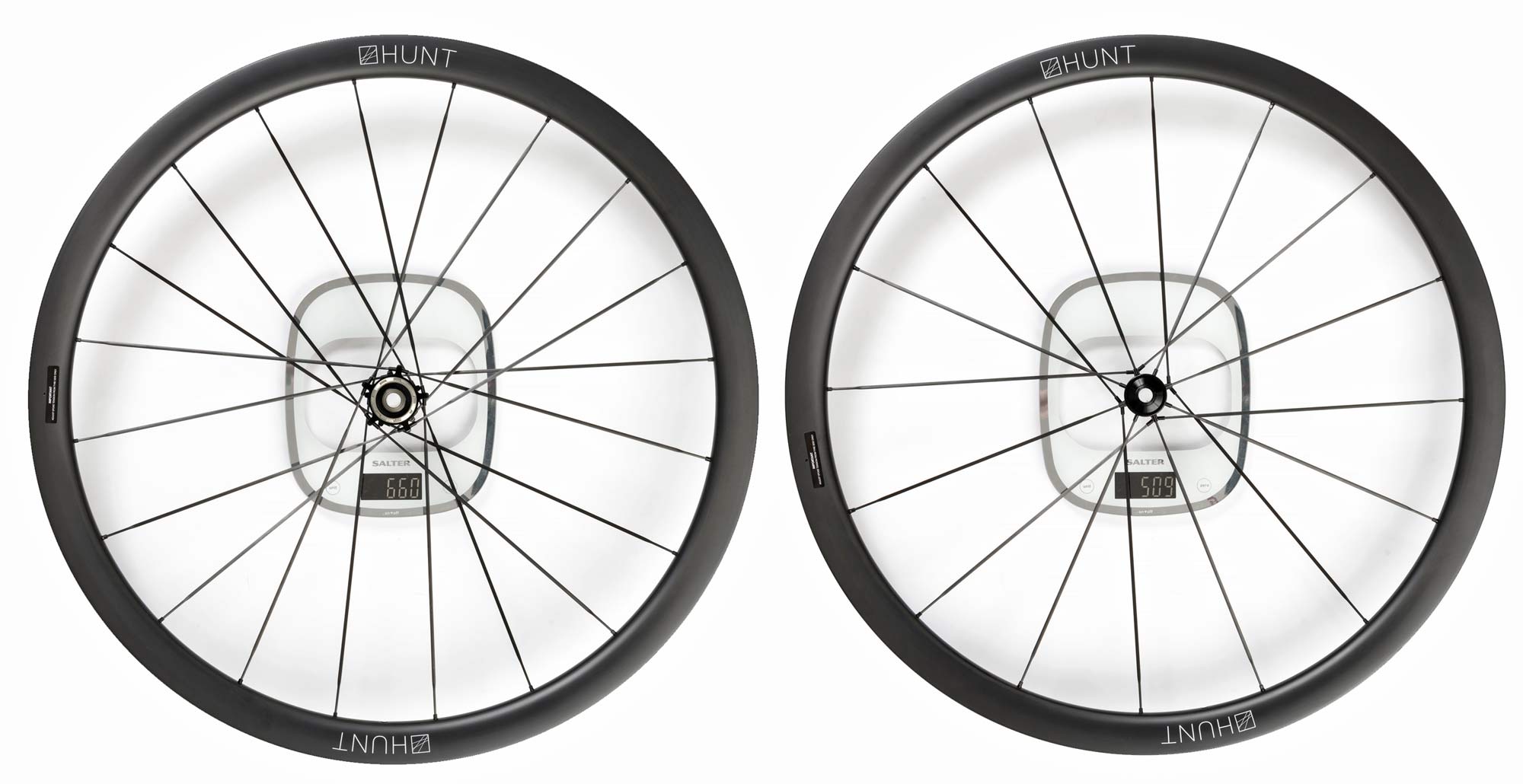 Hunt shared this photo of the wheels Sergio Henao was riding, on their scale at just 660g for the rear and 509g for the front – a complete weight of 1151g for the 12mm thru-axle, centerlock disc brake wheelset. 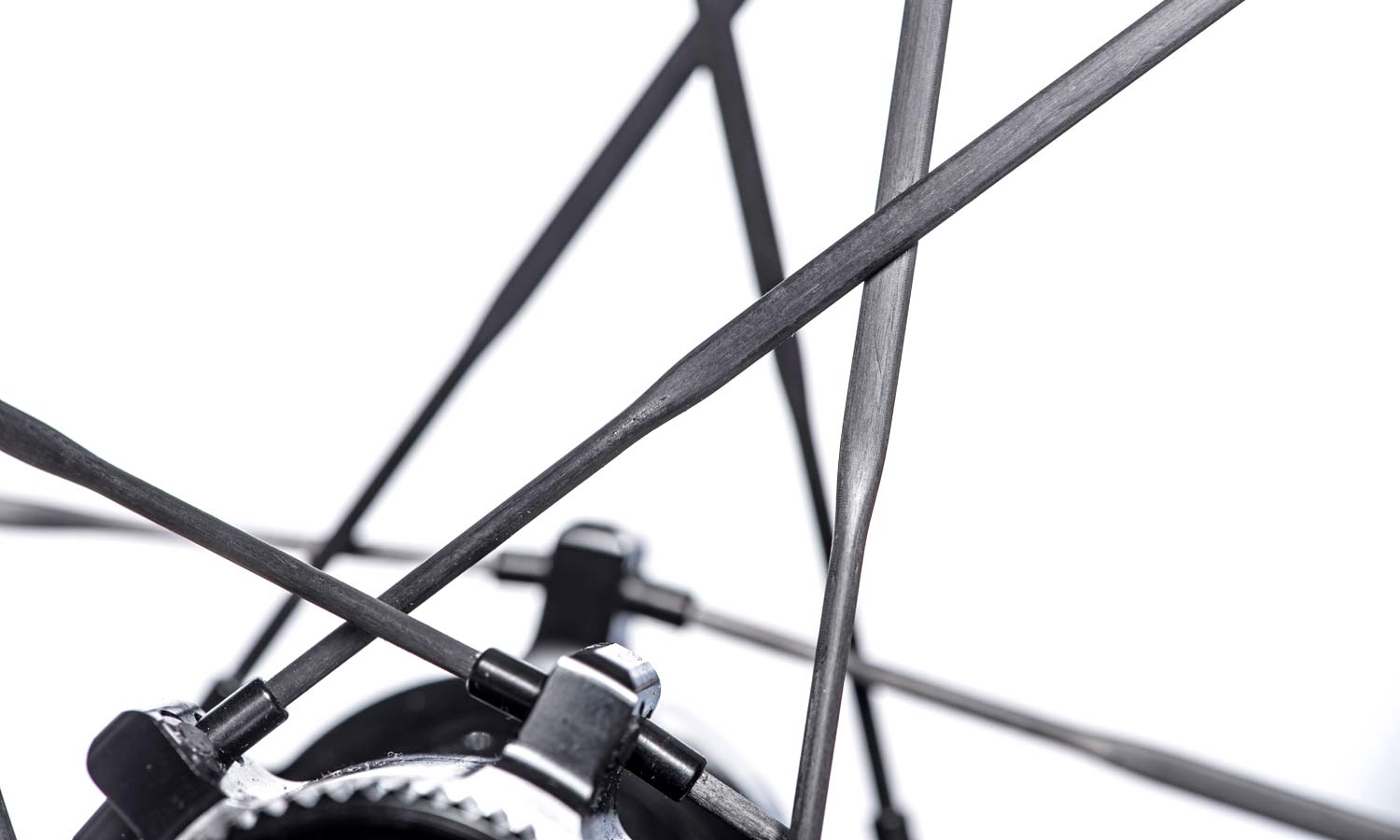 Hunt’s TaperLock full UD carbon spokes essentially build up wheels a bit more like conventional spoke or textile spoke wheels with special nipples at both the rim & hub, that allows both truing (from inside the rim bed only) and spoke replacement in the event of external damage. The result is said to be super light and super stiff, allowing very low spoke counts and ultralight complete wheelset weights. 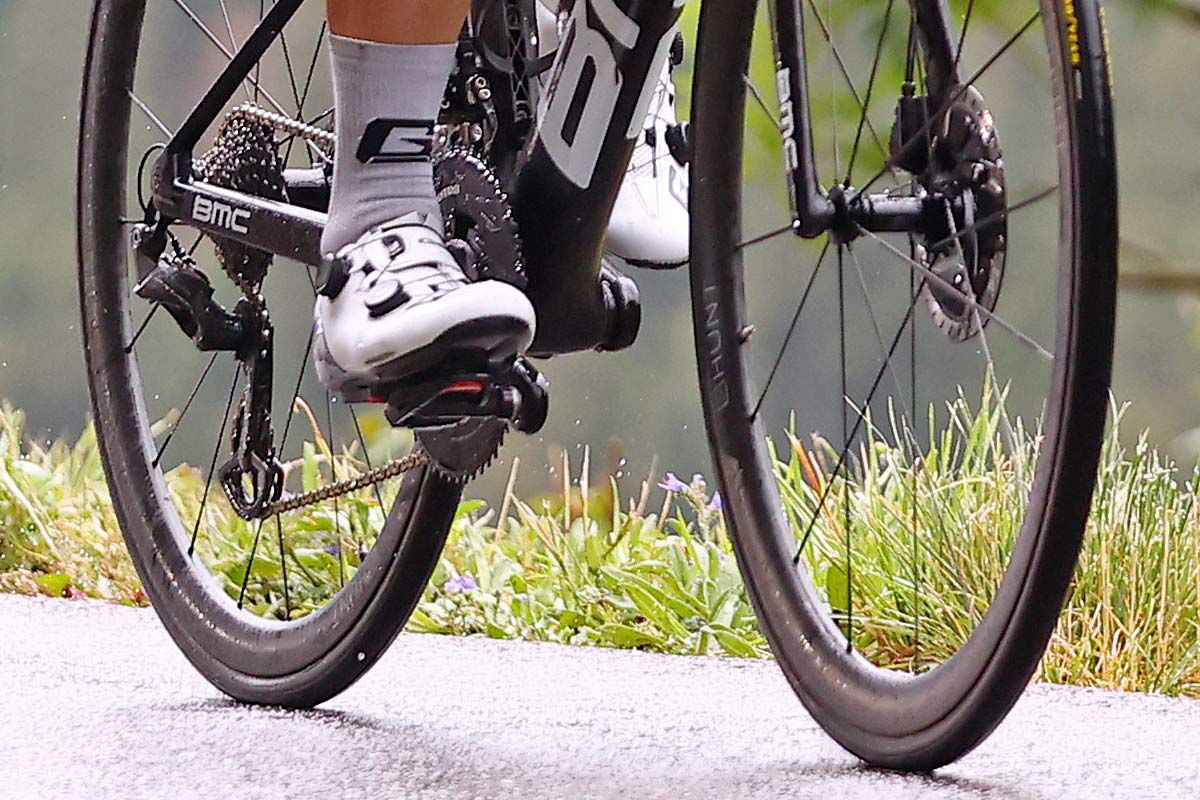 We can see from these photos that the wheels are laced with just 20 rear and only 16 front of the unique, bladed TaperLock UD carbon spokes. The straight-pull spokes are laced with equal numbers on each side (2x in the rear, 1x on the disc side in the front), and require special hubs with threaded flanges/tabs for the inner nipple/mandrel. 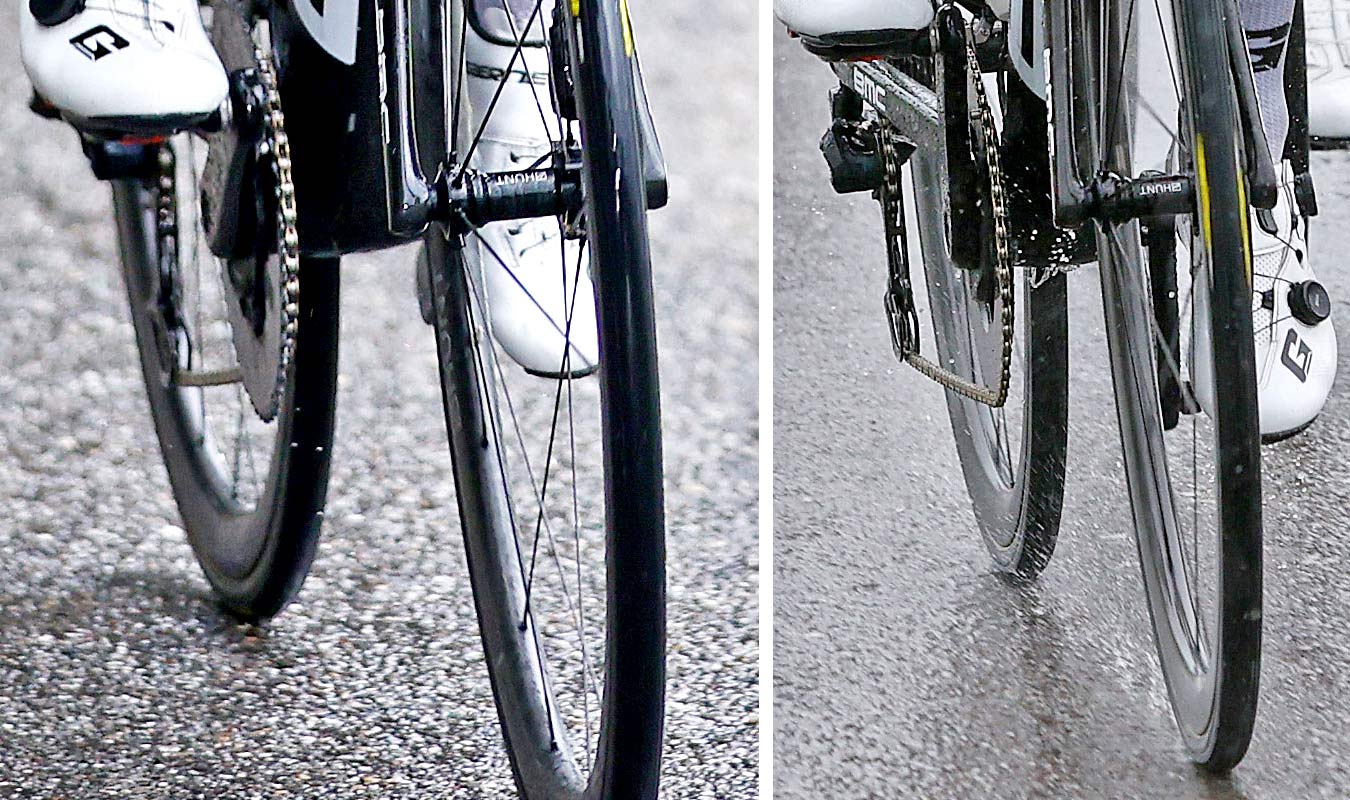 Looking closely at the front, these wheels do in fact look to have a new lighter set of disc brake hubs compared to Hunt’s first Carbon Spoke Disc wheels. These look to have a smaller diameter, more cylindrical body that steps down from the bearings inside the radial spokes on the driveside, then back up to the flange on the disc-side. 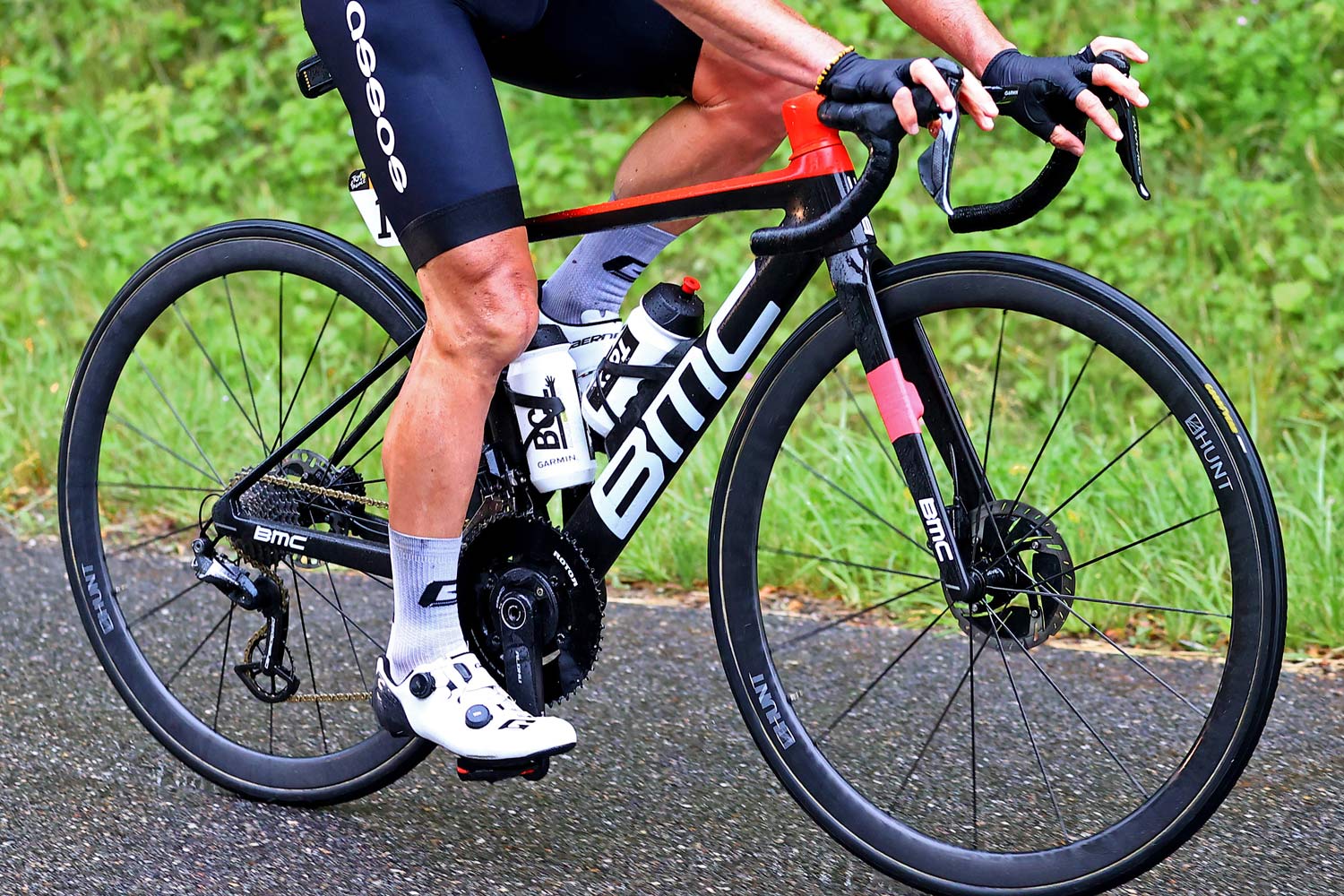 Obviously, ultra-lightweight will always draw a number of road cyclists in. But Hunt also claimed the first UD Carbon Spoke Disc wheels increased stiffness by 6%, even with 16% fewer spokes, and were better at absorbing high-frequency road buzz at the same time. Now, having proven themselves a bit in the big mountains of the Tour de France as tubulars, the next step will be to make a tubeless version for consumers. Hunt has even hinted that it might be hookless. 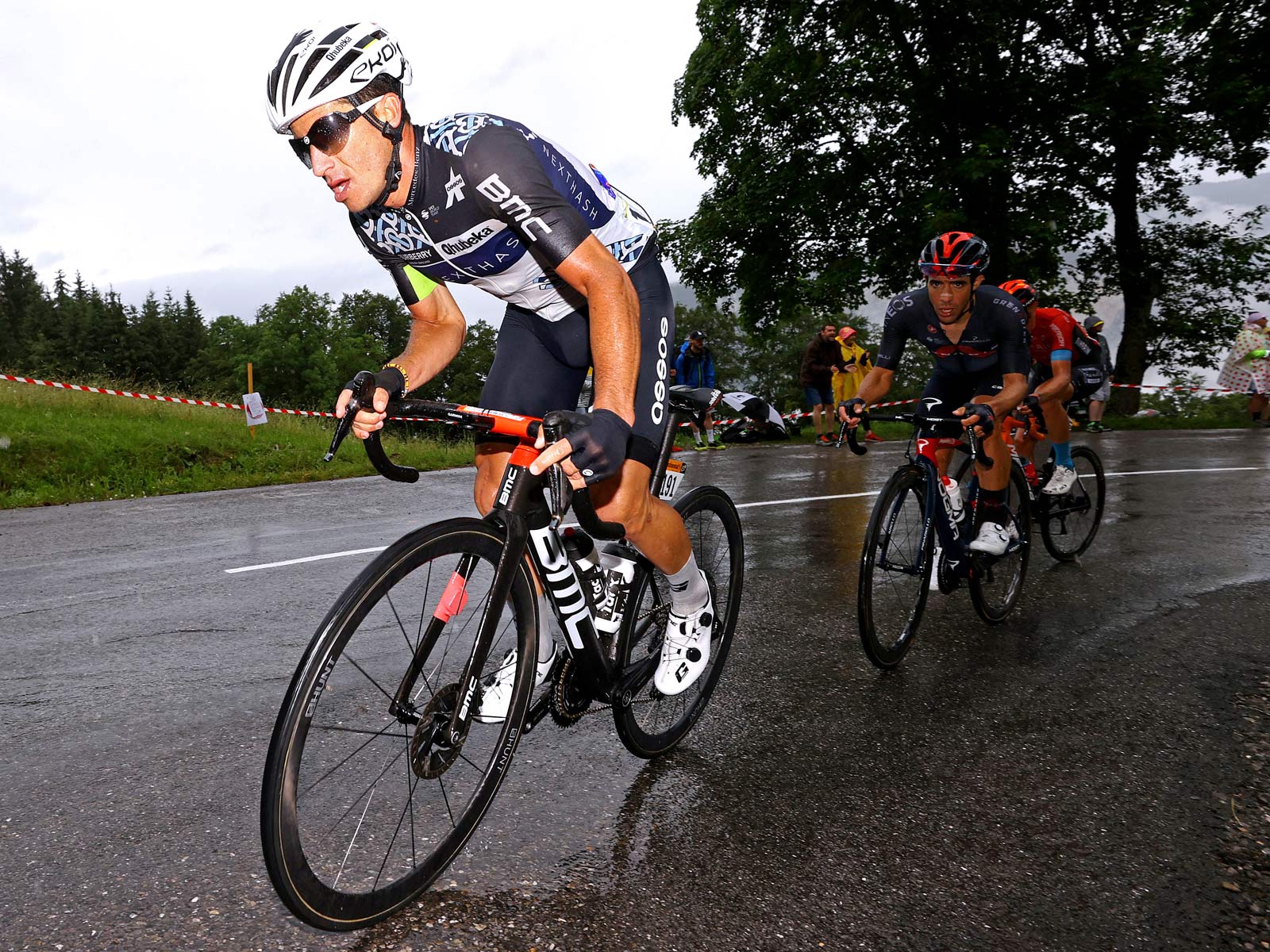 No official timeline or pricing has been released, but Hunt does already list this new depth on their website when describing Sprint hub/axle compatibility – listed as “36/44/50/4454/54 UD Carbon Spoke Disc Wheelset“. Curiously, that also suggests another new deeper Hunt 50 UD Carbon Spoke Disc wheelset that we’ve not seen yet either!

Of the top of mu mind, I guess if it’s a hookless version, it’ll only be like 50-100g heavier compared to a typical hooked design which seems to generally add around 200-300g to a wheel

4 spokes to handle the front braking?

K-Pop is dangerous to your health
Reply to  ccj

How do you figure that only 4 spokes out of the 16 are handling braking forces?

Where are you getting that number?

4 spokes? That’s not how it works.

I think that he’s implying that because half the spokes are radial, and 1/4 are “pushing” spokes, that the remaining 1/4 are the only spokes resisting braking forces.

Funny, cause I see 8 radial spokes on the non-braking side, while the other 8 are non-radial and all on the side of the rotor.

@Gillis yes you got me.

To the others, let’s count 8 spokes. Still, not sure if I’d trust such a front disc brake wheel.

K-Pop is dangerous to your health
Reply to  ccj

Well it makes sense that Sergio Henao is the test dummy, one of the lightest riders in the peloton.

Robin is right. Radial spokes don’t pass braking forces so only 8 on the cross side, half of those do the braking job. That is a sketchy number. Would hate to lose one under braking.

I have to agree, 16 spokes for disc forces is pretty sketchy…

To be raced, it’s supposed to be on the approved list. Making it not a prototype, making this not a scoop.

How much does Hunt pay for you to “spy” on them twice in less than a week?

Please stop with this pretense.

Roval do a similar spoke count but with steel spokes.

K-Pop is dangerous to your health
Reply to  Martin