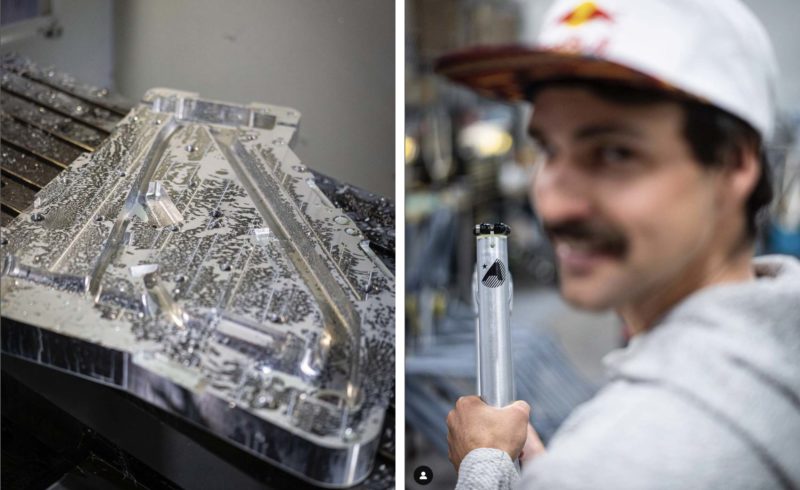 Earlier this year, Payson McElveen released the film from his one day, coast-to-coast mega-adventure in Iceland. At the same time, it was announced that Payson had just signed on with Allied Cycle Works. Obviously, Payson is an animal on a gravel bike, but he’s incredibly fast on a mountain bike too. That made us wonder what Allied might be up to in the near future…

Based on a couple of Instagram posts from Allied Cycle Works, it seems that a full suspension carbon mountain bike may be in the works. Allied is playing fairly coy with the teasers, but there’s no doubt that the photo above shows the front triangle of a full-suspension bike–the shock mounts are a dead giveaway.

Now, it’s entirely possible this is some kind of full-suspension gravel bike, but given Payson’s need for a mountain bike that’s sponsor correct, and Allied’s lack of a mountain bike in their current lineup, our money is on MTB.

The latest teaser shows Payson holding what appears to be a front triangle–no seatstays anywhere in sight. While it could be an alloy prototype, it’s also likely that this is a carbon front triangle painted with a metallic finish.

Whatever it is, we’re excited to see it.

But Hey!!!! It’s made right in Bentonville, AR. USA!! 15k aint nothing for our Walmart Exec’s.

whatever
Reply to  tech9

Hey, but that still is money being transfered to the people in production and local Allied management in the US, rather than being transferred out of country.

While it’s true most people who would buy this bike, will likely be relatively well off (wherever they may be), it will still keep much of the cost of production from going elsewhere.