These wild, Italian-made alloy MagneticDays Forza Pura cranks spin everything you know about pedaling a bike on its head. Developed to force cyclists to pedal perfect smooth circles with both legs, the Forza Pura crankarms disengage from each other, making each leg deliver power to the chain separately.

While looking into MagneticDays’ premium Jarvis indoor smart trainers (more on those soon), we came upon these even wilder Forza Pura alloy cranks. Born from the idea to improve pedaling efficiency by refining the pedal stroke of each leg, these crankarms can be completely disengaged from each other. With each leg able to separately put power into the drivetrain, a rider is forced to develop a smooth, circular pedal stroke without relying on one leg to make up for the shortcomings of the other.

The crazy cranks were a project developed with ultra-endurance athlete Nico Valsesia, who used them to refine his pedal stroke in the lead up to several of his From 0 to… attempts, cycling from sea level up until he transitioned to running on foot to ascend high peaks with massive vertical altitude gains in Europe and around the world. The bulky (and expensive) crankset is CNC-machined in Italy from 7075-T6 alloy aluminum, and anodized in nice bright read for everyone to see. Because you aren’t going to hide these monsters anyway. And don’t ask how much they weigh. At least that weight is as low as possible on your training bike. 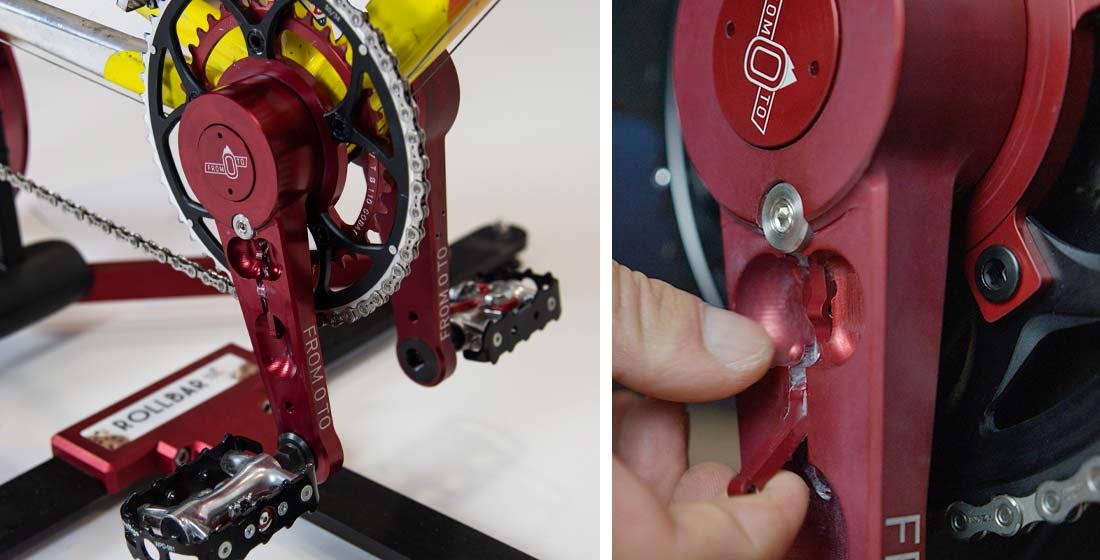 Simple “Fast & Easy” locking levers on each arm allows you to disengage, then re-engage each arm from the drivetrain independently. With separate bearings & ratchets in the oversized center of each arm allowing either crankarm to freewheel while the other is pedaling power into the chainring spider and subsequently into the chain. The entire system is said to work with almost any bike. The cranks attach with a seemingly conventional square taper bottom bracket interface, and MagneticDays selling compatible BBs to fit most bikes. The cranks also feature a classic road compact 5-bolt 110mm BCD to work with many available chainrings. Crank length appears to be adjustable with an eccentric pedal thread insert, offering 170, 172.5 & 175mm lengths.

MagneticDays also has a number of Forza Pura-specific training plans. Or you can simply work on your pedal stroke & separate muscle groups independently, training one or both legs at a time, indoors or outdoors. Then, flip the levers back to engage both legs together and continue riding normally. First off, the MagneticDays Forza Pura cranks aren’t cheap. At 1200€ to get their training benefit, it’s a pretty big leap to make. But, MagneticDays understands that too, so they offer a couple of ways to make it more palatable. Rent the cranks for one month to see if they really benefit you for 100€. Then if you feel like they are a boost to your training, you can buy them outright for another 1150€, or pay them off in an installment plan over 22 months that will add just 50€ extra in total.

So, a copy of PowerCranks (Frank Day)…all we need is some SMp from Steve Lubanski and we can set some new trends from about 15 years ago! 🙂

corinnamaggy
Reply to  None Given

2pacfan187
Reply to  None Given

It’s a bit weird that the article doesn’t even reference them.

So they’re Power Cranks, but uglier and more expensive.

This looks like a bit of neat engineering. I’d be curios to try it after a lifetime of fixed crank arm phases, just to see if I could ride a bike without that expectation. However, at the risk of being a naysayer/debbie downer –

This is DOA. We’ve had a decade of power meter data showing the for most people, the L/R power ratio is already pretty much 50%/50%, within a small range. There’s nothing left to develop in the power stroke that can’t be gained by a set of rollers. It’s big, fugly, expensive, seemingly lacks power monitoring, and prone to failure in ways that fixed cranks aren’t. It’s basically the antithesis of the last 20 years of crankset development.

there has been a very similar product available in North America for I think around 20 years… you can find them on powercranks.com. I have a set with an Octalink BB interface and while I admit I haven’t used them in a few years, they did make a big difference in how ‘smooth’ my stroke felt (after I spent a month working up to being able to ride any appreciable amount of time on them). I am no longer a sport scientist, but these types of things do get the “Holiday Inn Express last night” seal of approval

As noted above, the concept isn’t new. https://www.bikeradar.com/reviews/components/groupsets/cranksets/powercranks-x-lite-review/

Nice pyrography on the box.

At the start of the one video the left pedal was “up” – so, in the video for the crank they were in locked mode????

The “New old” trends or gadgets will always be a source of “inspiration” for startups without creativity. I’m not saying it, it’s the current trend, copy and paste.

Next up — a shock-absorbing stem!!!

I don’t see anything wrong with offering an unusual product that’s similar to someone else’s. I mean, is there a victim here? A false claim? Maybe the price is high, but I don’t hear anyone complaining about that.

There was an Instruction how to build such Cranks for about 20 USD, has Anyone of you the link?
Cannot find it Anymore…

I wonder what the durability is like with these. likely better then powercranks as they rely on a ratchet mechanism insted of powercranks clutch bearing. I also like the simplicity of the solid lock mechanism.
i wonder if the patent is up on Frank Days cranks? it has been 20 years now.

All that and no crank length available below 170mm? That’s a worse range than mainstream brands. It’s a great product, but if you’re 5’2″ and compete on 155mm cranks these are yet another product that helps everyone you’re racing against.

If you’re really a cutting-edge crank manufacturer, leave the archaic beliefs regarding crank length behind and get up to speed with the scientific basics of biomechanics. Loss in leverage from shorter cranks is cancelled out by the gain in leverage from shorter limbs. Cranks too long are less efficient and more importantly destroy knees. Cycling is at an age when traditional beliefs are being replaced by scientific facts; get on board…

As someone that rode Powercranks, I can tell you that these are worthless. Do a spin scan and you will see that your left and right legs are pretty equal. The difference is not worth pursuing. But do buy and ride a set of rollers… put your rollers near a wall so you can bump into the wall from time to time… this will train you to stay upright when you bump another rider… rollers also train you spin… and you won’t be another hipster dofus on smart trainer.

Yes, rollers are the bomb for improving cadence and development of a smooth pedal stroke as well as riding in a straight line while dealing with a crosswind. Seems like all these pedal drills are worthless. I live in an area where a lot of world tour and domestic pro guys come to train in the winter, remember when pedaling dynamics from pioneer came out, every pro on a giant bike that I met that year admitted they never used it. Don’t see a lot of pro riders doing tons of pedaling drills these days, high cadence drills yes but it seems with a good fit and a focus on good cadence your pedaling technique sorts itself out perfectly fine.

These aren’t about 50/50 balance, these are about leg independence. In other words, each leg has to also lift the pedal, it can’t just rest while the other leg pushes down.

Is there any evidence that ‘pedaling circles’ has any actual benefit? The evidence that clipless is not more efficient than flats would pretty much mean that ‘pulling up’ has essentially zero value.

Plenty of evidence. Don’t be such a rube.

Ahh a good ole blast from the past. Remember the old power crank informercial type videos with the ridiculous claims. Reminded me of the Hammer X golf club commercials. (https://youtu.be/yIw6RHJRGbs)

Another gimmick that completely fails to understand how people pedal.
Same as powercranks, but shinier, and red.

“…There’s nothing left to develop in the power stroke… “ – Said by someone who has apparently never used Powercranks. Once you try them, you’ll almost certainly change your mind.

Or just ride a fixed gear to improve the smoothness of your pedal stroke.

This is far from DOA. It is not about L/R balance at all it is about developing your fullest poweraround the pedaling circle and driving each leg through the circle not just letting the pedal bring it back up. It is truly a marvelopus tool.

“Plenty of evidence” is not actual evidence. To wit: ‘other’ studies shows that the difference between elite and run-of-the-mill cyclists is not that elites have a more even pedal stroke, it’s that the former push harder on the pedals. I know, shocking surprise.

Cadel Evens claimed he would never have got competitive without using a pair of reverse ratchet pedals that had to be pulled up by his legs muscles & would not get lifted by the opposing pedal going down. It help him using a more complete set of muscles when peddling thus making him more competitive