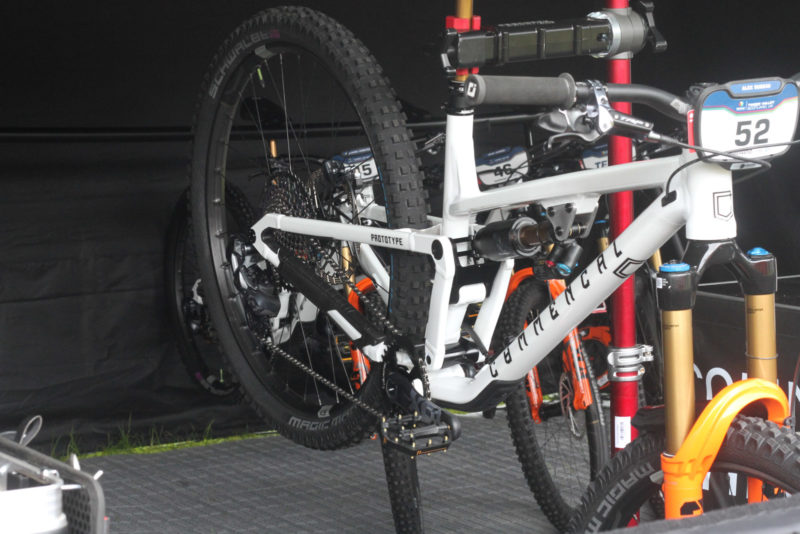 Commencal Enduro Project athletes, Alex Rudeau, Guillaume Labeyrou, Louis Jeandel, will be racing EWS Tweed Valley this coming weekend aboard a prototype Commencal META AM with a new four-bar linkage suspension platform. The bike is a grand departure from the link-driven single-pivot seen on the current META AM and META SX, now boasting a rather unique-looking interpretation of a four-bar linkage design they are calling the “Virtual Contact System”. The team’s mechanics kindly allowed us into their tent to get some close up photographs of most, but not all, of the frame details. 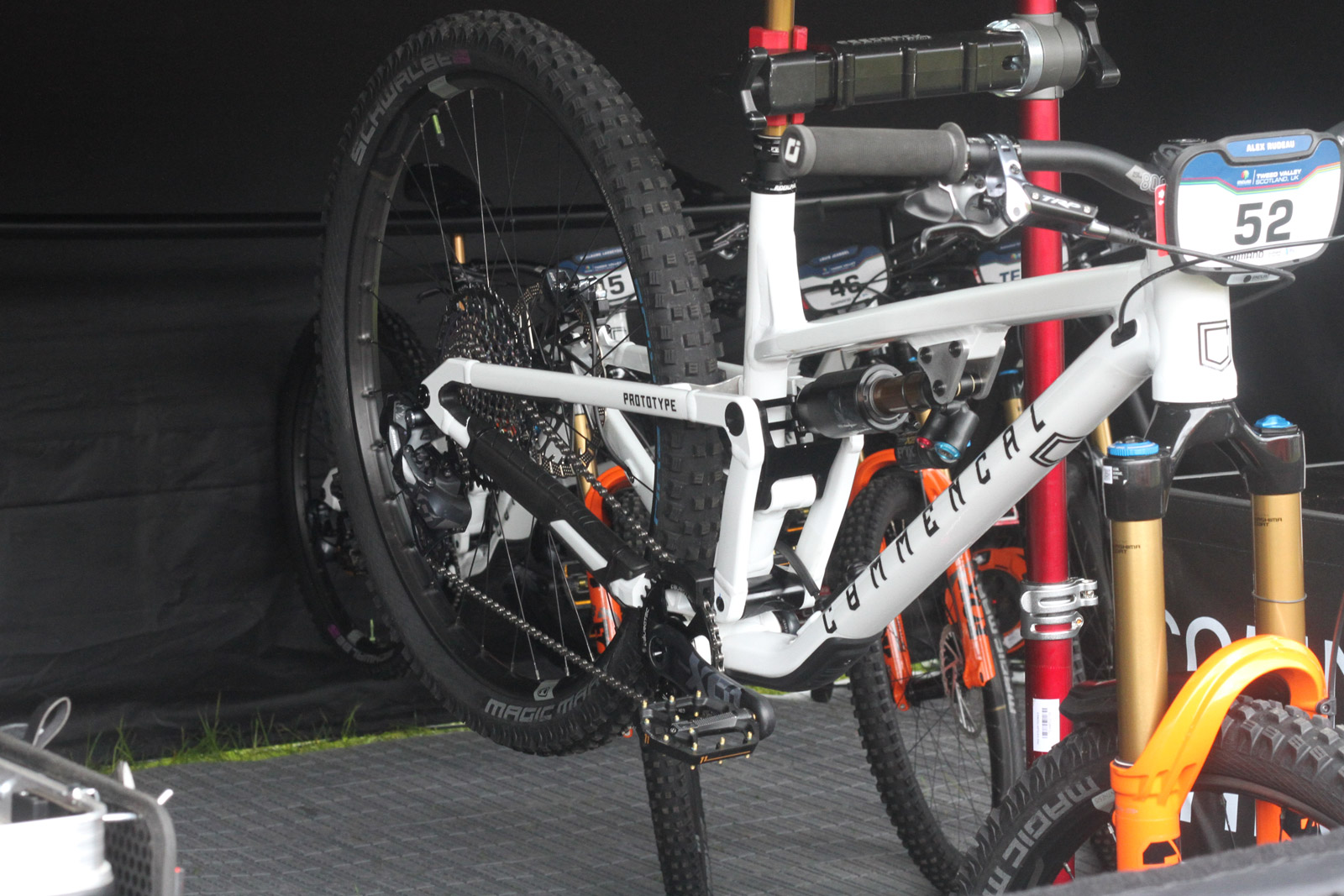 We hypothesize that the two links co-rotate in a clockwise direction as the rear wheel is pushed through its travel.

We did pester the Commencal team mechanics for a video of the prototype META AM, so that we could show you guys exactly how the two links pivoting about the seat tube rotate as the bike is pushed through its rear wheel travel. Unfortunately, they declined. The upper rocker drives the top tube-mounted shock, while the lower link that attaches the rear triangle to the front triangle pivots in front of the seat tube, rather than behind it.

The bike is a result of the Commencal Enduro Project, a 3 year development program inspire by their DH development model, that will look to help Commencal “improve, firstly in racing and then for everyone”. They say it has allowed their engineers to confirm new kinematics and geometry principles. 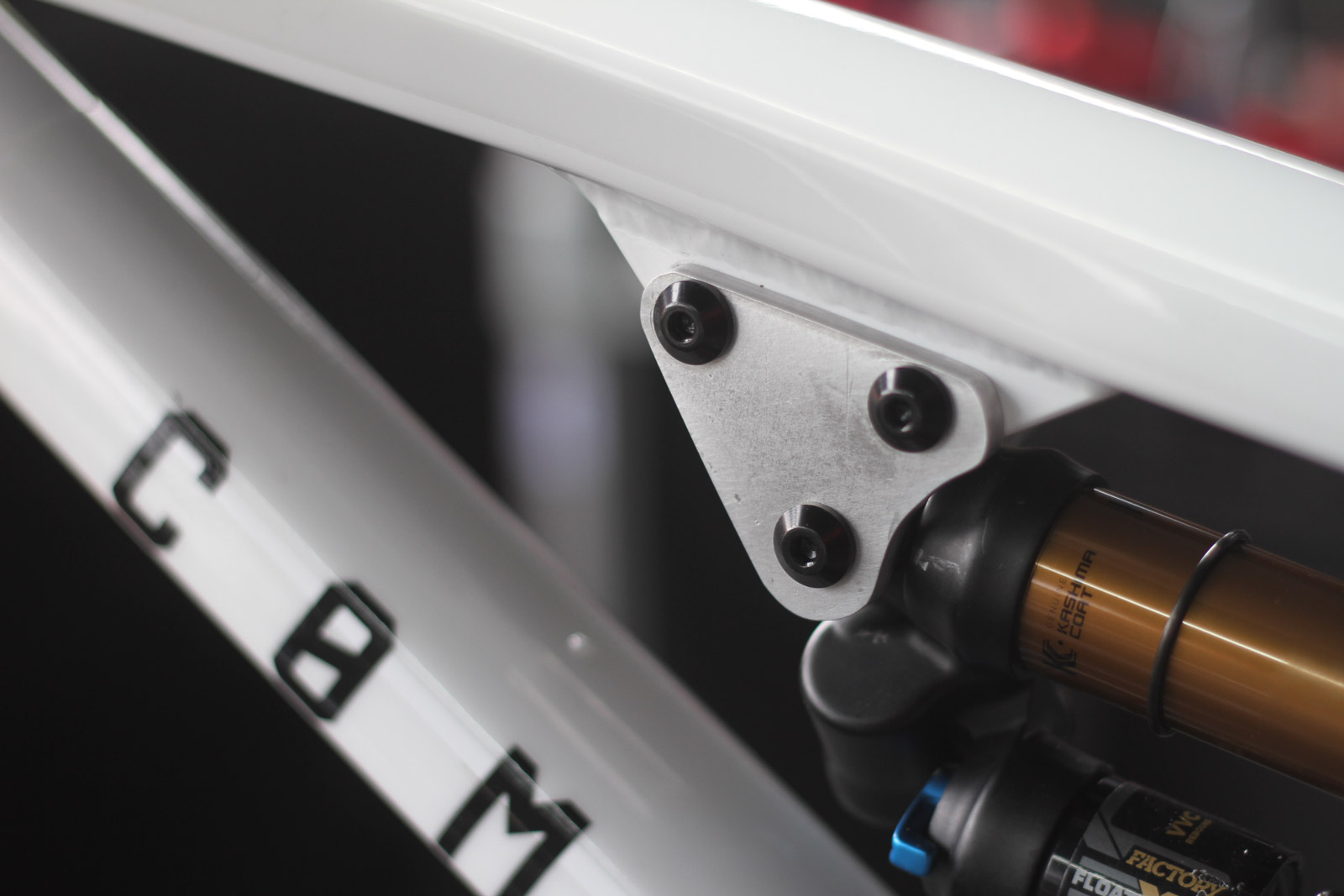 The Commencal team mechanic told us they are still experimenting with the position of the shock mount tab on the top tube, allowing them to change the progression of the suspension platform

Commencal’s mechanics remained tight-lipped on most details about the new bike, withholding information on the kinematic, and even how many millimeters of rear wheel travel the new linkage supports. It seems the suspension layout isn’t geared specifically toward an air or coil shock, however; Alex Rudeau’s bike was fitted with a Fox X2 air shock while his team mates’ bikes wore DHX2 Coil shocks. The fork travel on this one is 170mm. 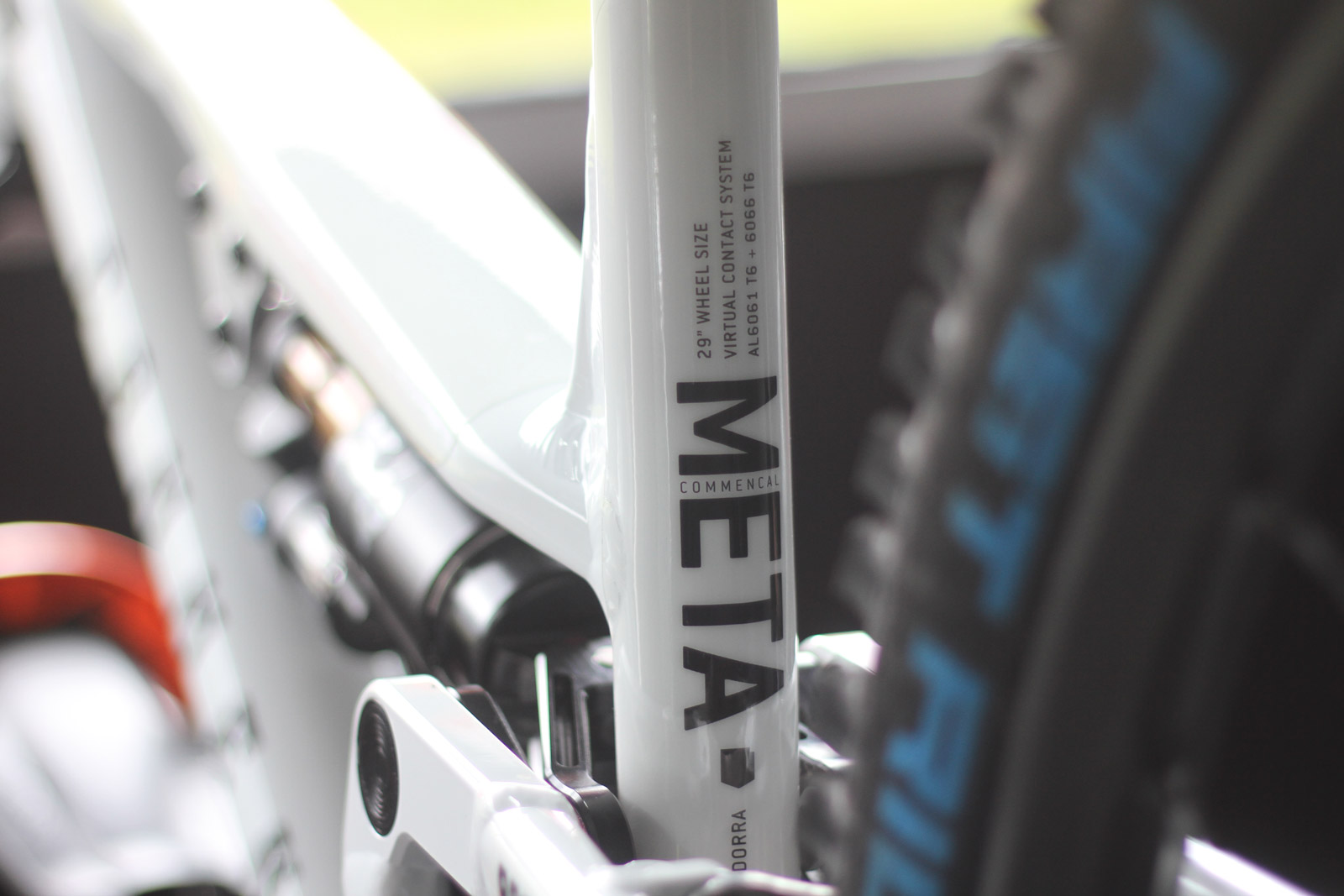 The frame is developed around a 29″ wheelset, made from a combination of 6061 T6 aluminum and 6066 T6 aluminum. Alex Rudeau is running those prototype “First Ride” Schwalbe Magic Mary tires we spotted in Fort William a couple weeks back. 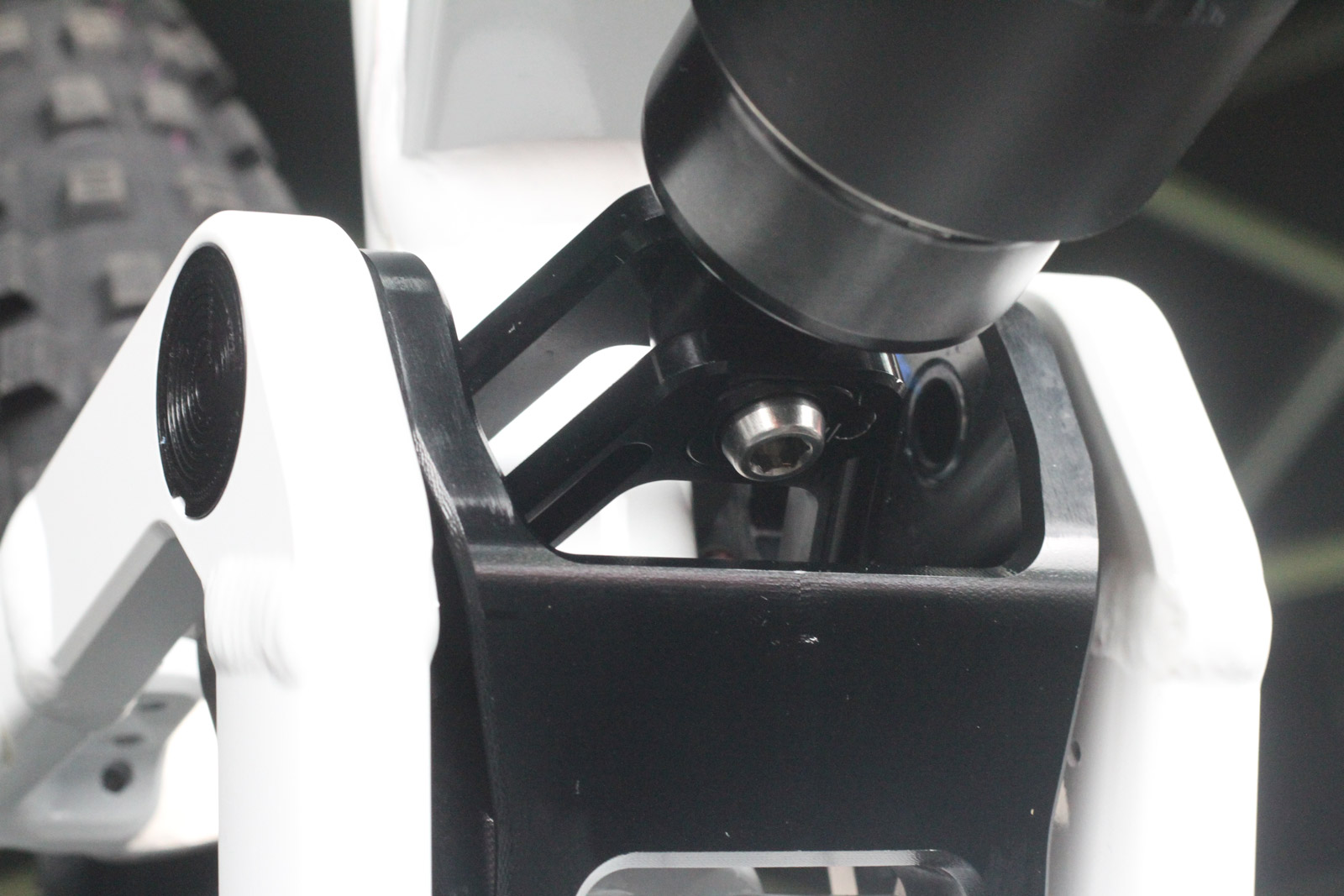 The bike is a dedicated 29er, with no indication that it can be converted to a mullet configuration. Geometry is adjustable, however, by virtue of a two-position flip-chip at the lower shock mount. This adjusts the bike’s bottom bracket height, and likely the head and seat tube angles, too. There is no flip-chip at the dropouts for chainstay length adjustment. 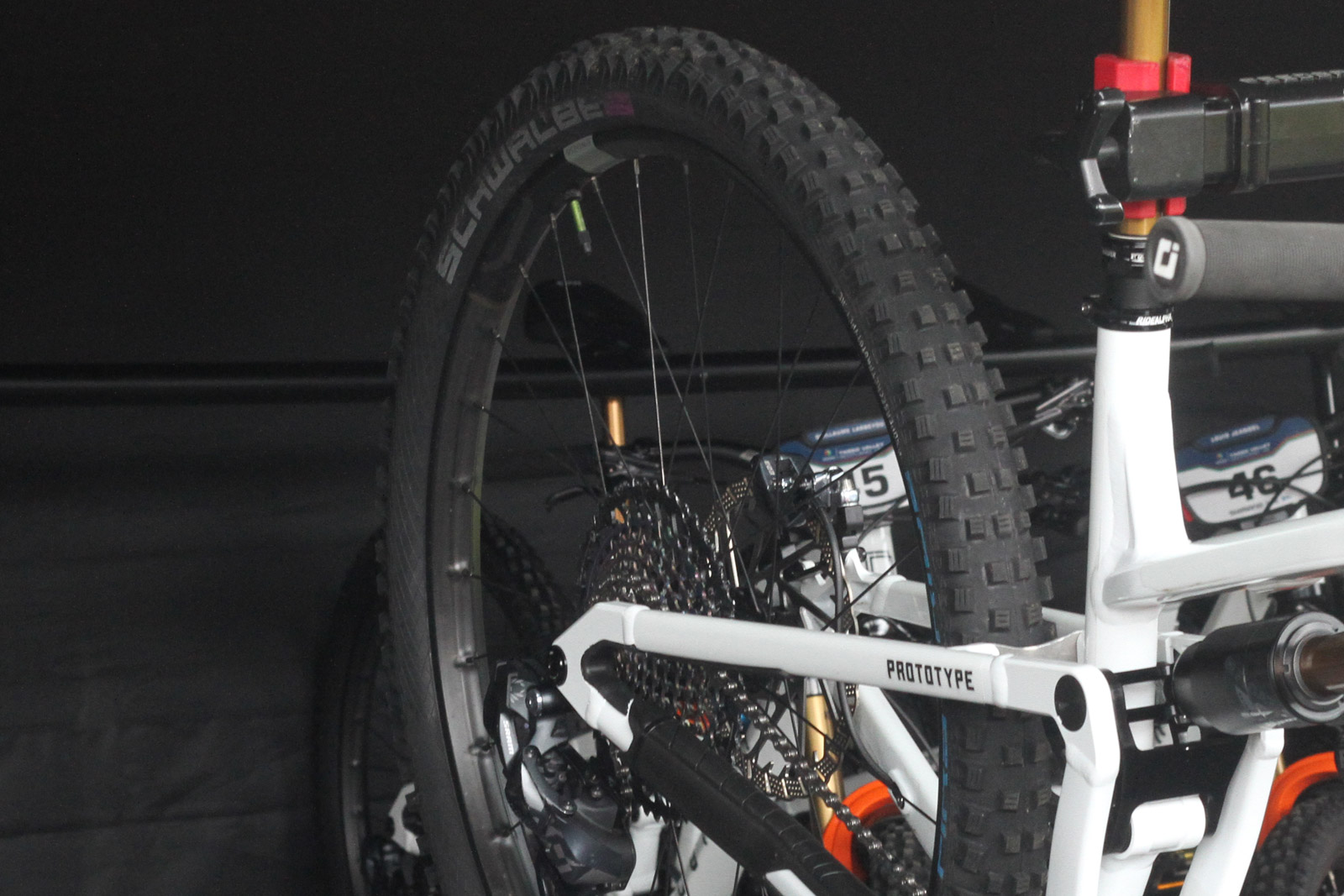 Though you can’t see it clearly here, there is a brace plate bridging the seatstays laterally, just behind the seat tube. We saw three possible mounting positions for this brace plate (sorry, we were not permitted to take photos of this). On Alex Rudeau’s bike, this was bolted into its most rearward position, very close to the rear tire. The Commencal mechanic tells us the different mounting positions allow them to play around with the stiffness of the rear triangle. In that rearward position, it will also serve to scrape mud away from the rear tire. 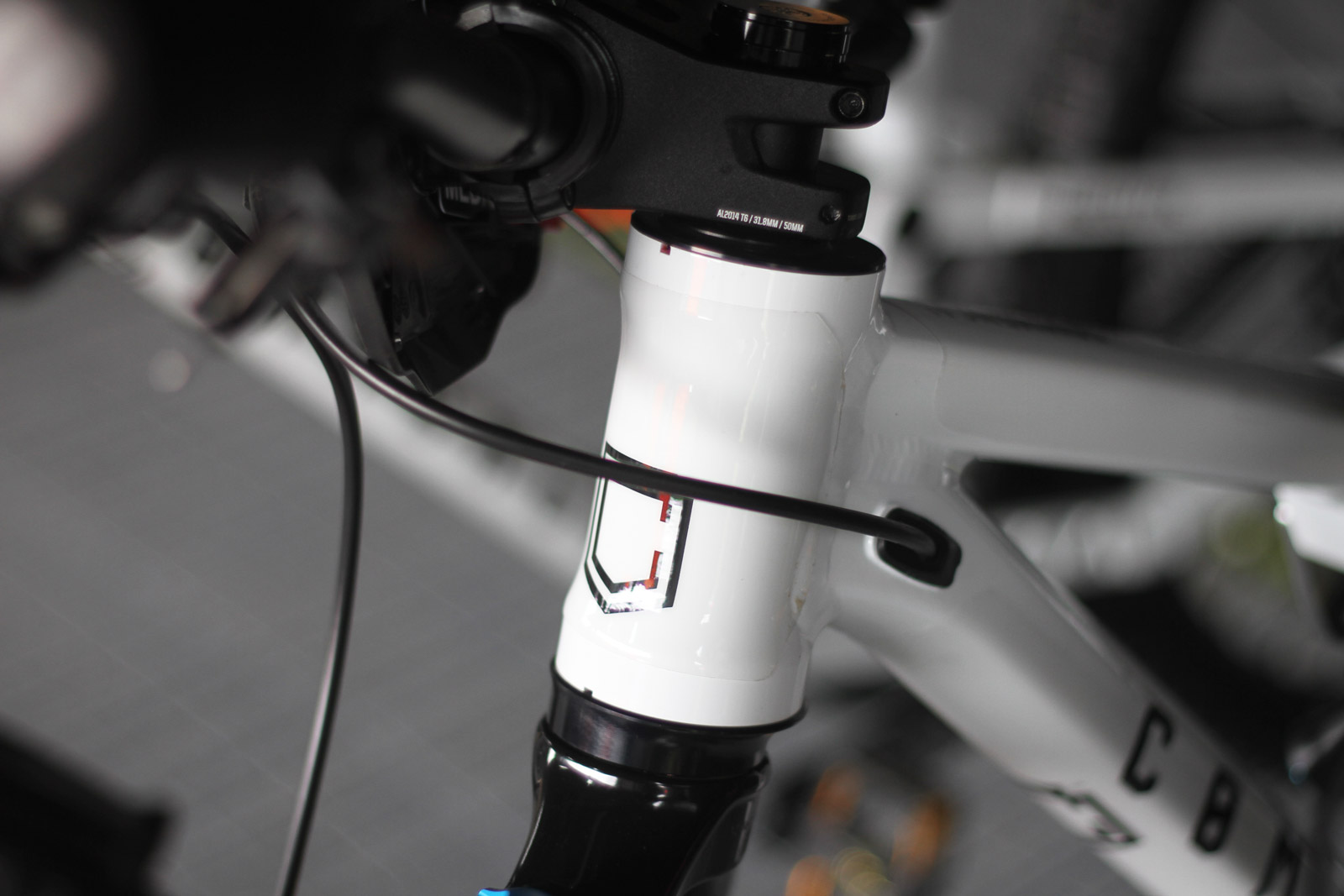 Reach on the prototype Commencal META AM is adjustable, but only by virtue of the 56mm upper headset diameter that allows the fitment of an aftermarket reach adjust headset from Works Components.

A cavity underneath the top tube shock mount may allow an internally routed cable for a remote shock lockout to exit the front triangle close to the rear shock. We’ve no idea what that raised square-shaped portion of the top tube is up to. Perhaps it some kind of sensor for electronic suspension? Seems like it could theoretically detect the position of the air can as is moves through the travel. That would certainly require a special shock with a corresponding device built into it, like an NFC chip or RFID tag. 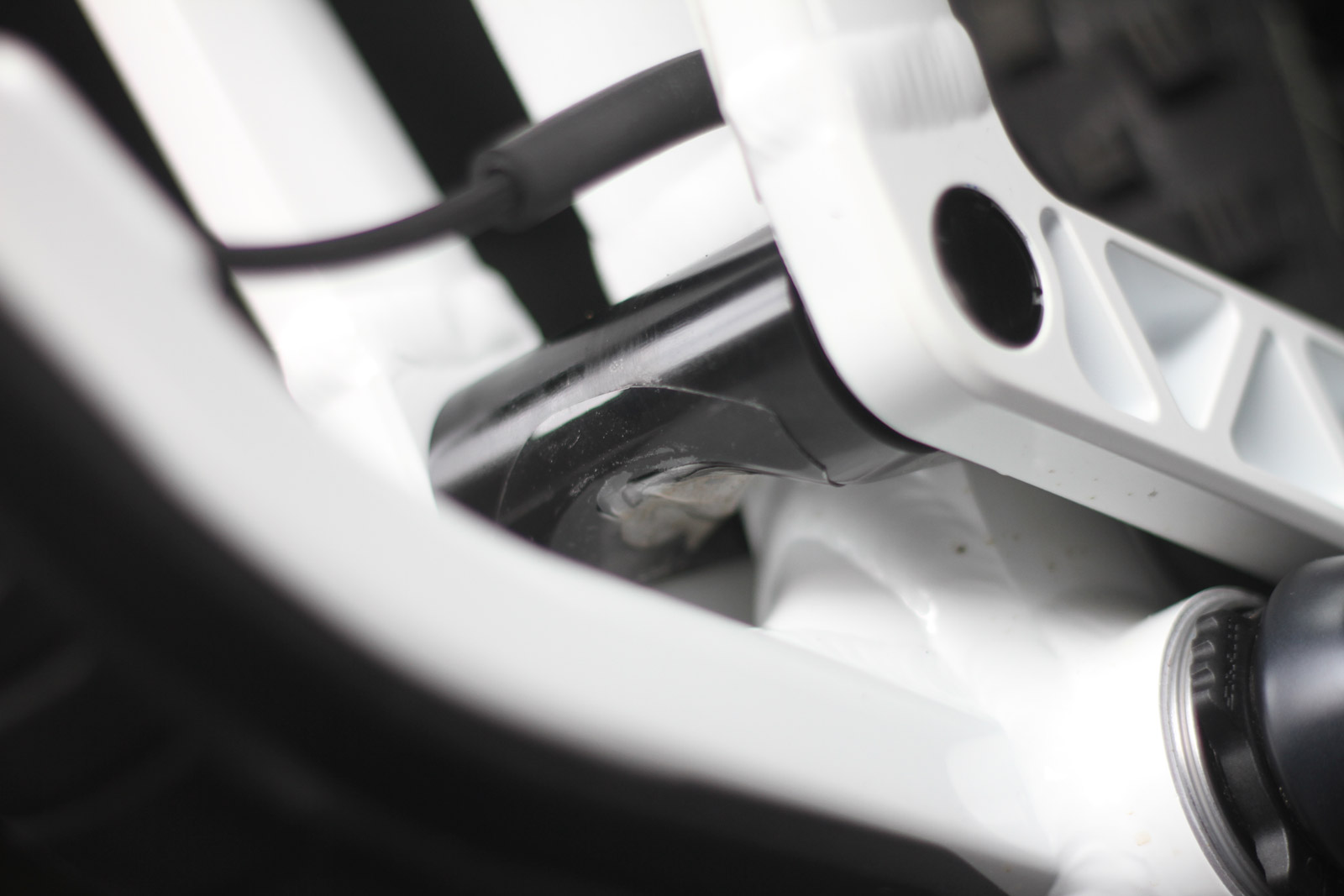 We’re not sure why the underside of the lower link has this cavity, but the mechanics taped it over to prevent mud accumulating in there 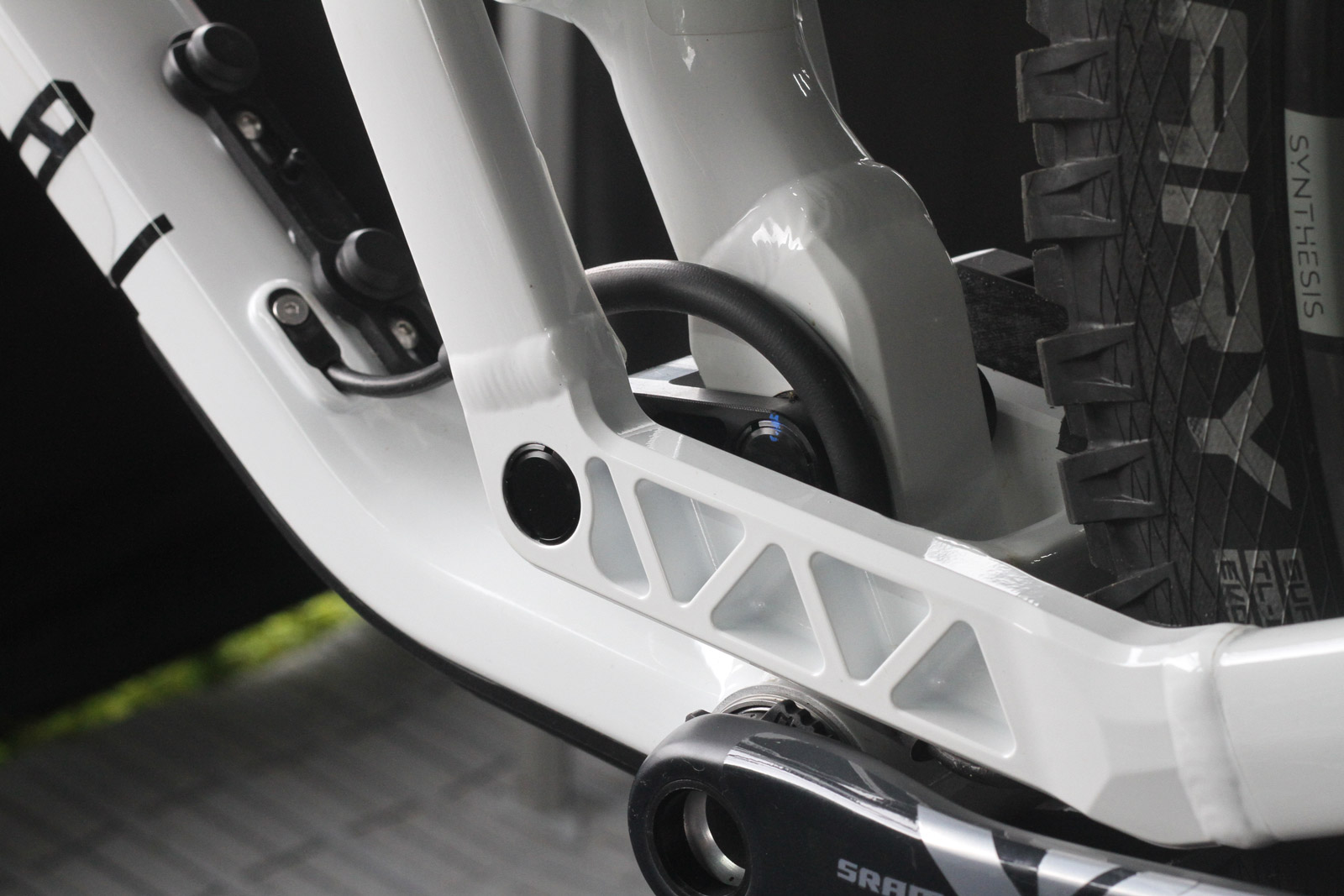 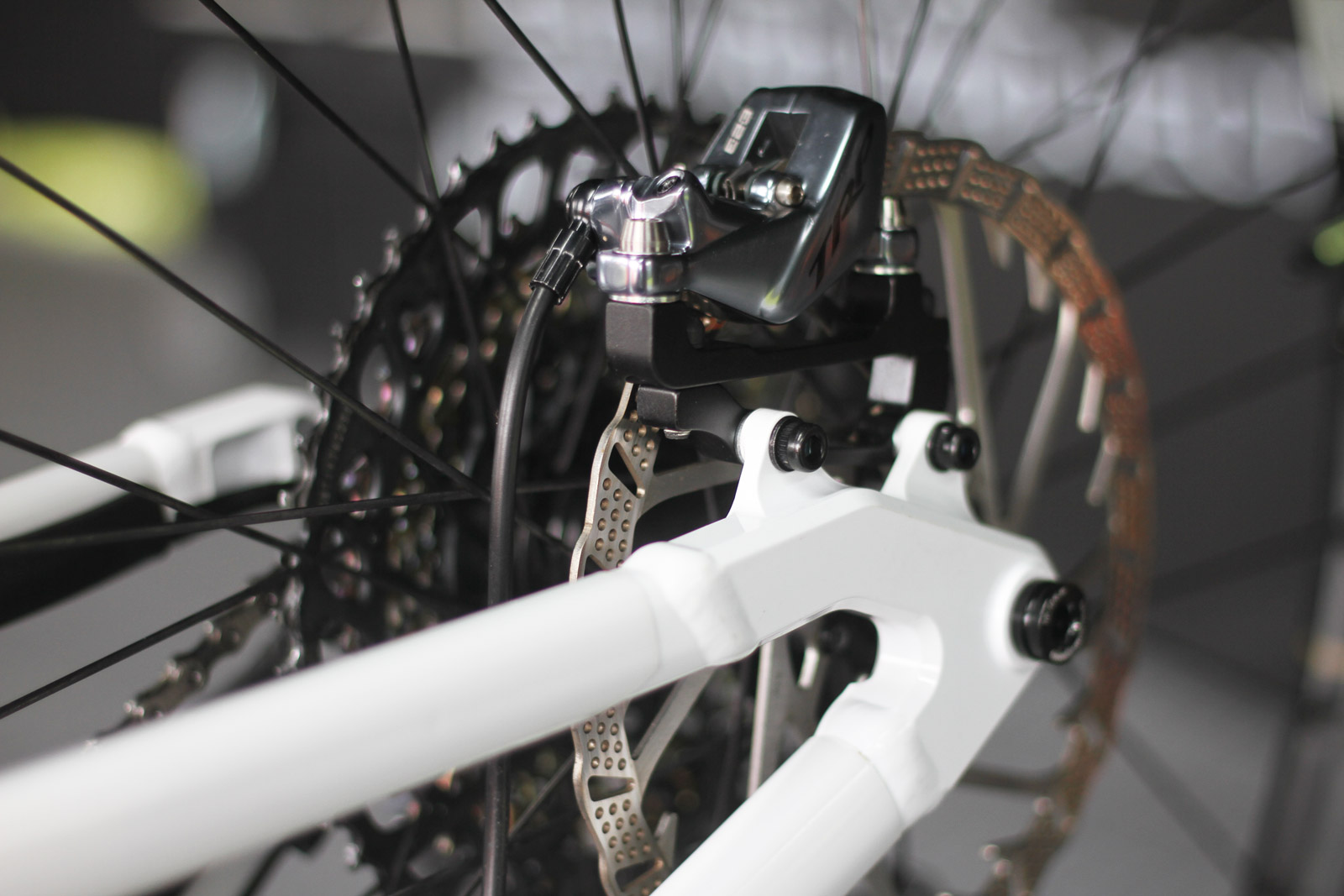 The rear brake caliper is mounted to the frame via an IS mount combined with a post mount.

We’ll be keeping our ears close to the ground for more information on this one.

Hey Jessie-May, that weird brake mount is actually the IS Standard and has been around for more than a few decades. A lot of bikes still use it. In this case, it looks like they’re using two adapters: an IS mount 160 that bolts to the frame and a P40 post mount to post mount adapter to fit the caliper to the IS mount. Probably because the Galfer rotor isn’t available in 203mm and TRP doesn’t offer a 200mm IS adapter so they needed to cobble together a fit fix.

Thank you, Smokestack. I have updated the text.

I think the white square over the shock is just a protector. The weird window in the bottom link might be to give it space with the frame, so it doesnt touch it when it rotates.