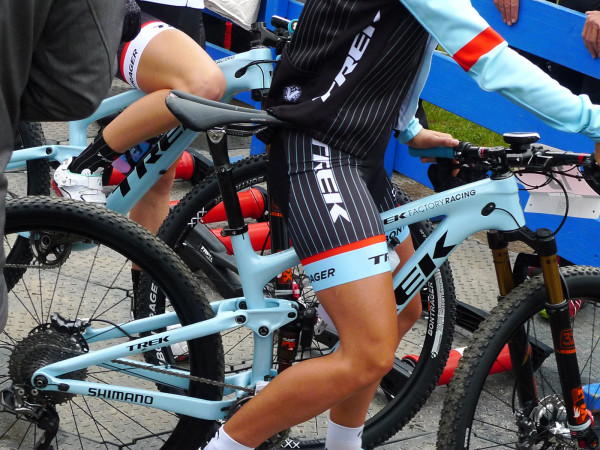 Over the weekend in Nové Město we spotted a bunch of red and baby blue bikes being ridden around by the Trek Factory Racing Team without model names on them. The two different carbon bikes, one new full suspension design and the other a hardtail with the IsoSpeed seattube decoupler, were being kept inside a unusually closed-off team tent, but were readily available on the course and in the start area for more details. Trek’s mechanics and team management weren’t ready to talk tech with us, but suggested that we will find out more in just over a months time from now.

We snapped a few spy photos from around the race venue, and will talk interesting developments and expectations after the break… 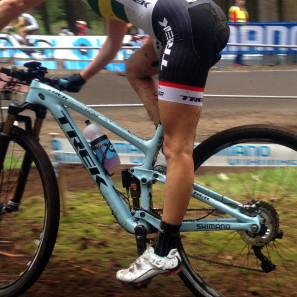 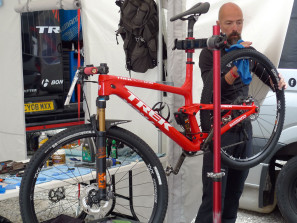 What do we know? There had been rumors of Trek bringing back the Top Fuel name, and with a suspension layout and shock position that moves from the current Superfly FS layout back to something very similar to the last Top Fuels this seems likely. Key suspension design attributes are the Full Floater shock mounting, which mount the lower shock eye to an extension of the slightly asymmetric chainstays, and the ABP (Active Braking Pivot) rear end, in which Trek places the thru-axle inside of the rear pivot to isolate brake forces from suspension movements. Update: Most of the bikes we saw were 29ers, but the standout was Emily Batty’s small frame that had a 650B wheelset with non-sponsor-correct unbranded Stan’s rims and Maxxis Ikon tires, making us pretty confident that smaller frames will at least have the smaller wheel size as an option.

The frame gets modular internal cable routing, so with these Di2 builds the non-driveside ports are empty. The routing is compatible with new side swing front derailleurs. There is a direct mount for either a front derailleur (as the women’s blue bikes were set up) or a chain guide (the red men’s bikes had MRP guides.) Of note the rear brake hose pops out off the top of the downtube in front of the BB and runs externally on top of the chainstay. 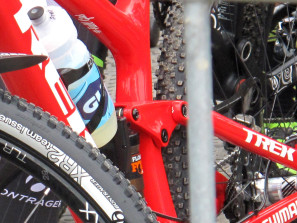 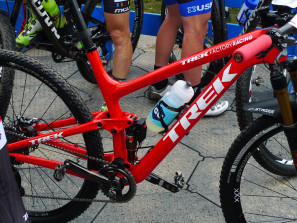 Add in that #FullGas script decal on the underside of the toptube for a little more reinforcement of the naming scheme. The rear pivot of the EVO rocker link has offset hardware, for what appears to be Trek’s Mino Link from their trail bikes that lets riders adjust the headtube by 0.5° and BB height by 10mm with the simple flip of this hardware insert at the top of the seatstays.

An external bolt on the downtube looks like it may be the mounting point for an internal battery, since the curved seattube means it may be difficult to mount a battery inside in that traditional location on smaller frames. We also spoke with several teams that talked about wanting to mount their batteries lower in the frame for the better handling that comes with a lower center of gravity, and the added benefit of being able to more easily swap out a broken seatpost in a race. Also of note, but no surprise, rear hub spacing is 148mm with Boost 148 labeled hubs. 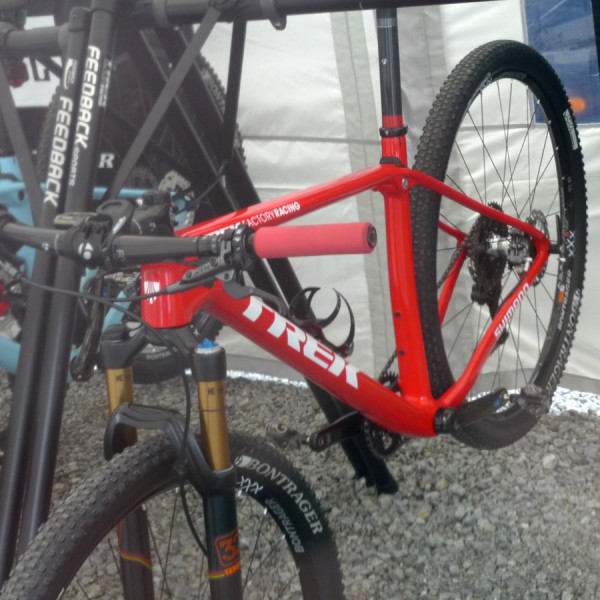 What do we know about the hardtail? Well we haven’t reliably heard a name leaked, so we’ll stick with calling in the IsoSpeed Hardtail since that is its obvious standout feature. Bringing the IsoSpeed decoupler from the Domane road and Boone cross frames seems like an obvious progression, and something many have been waiting for. In doing so the pivot-mimicking decoupler gets a tad bit wider and slides a bit lower than the road bikes to allow the use of a standard seatpost vs. the road’s seat masts. With the hardtail and the limited number we were able to see up close, all had 29er wheels, but we might presume that 650Bs might show up on the smaller sizes.  Interestingly enough, even though we saw a couple of the IsoSpeed Hardtail’s pre-riding the course, every Trek Factory racer was on the new Top Fuel for Sunday’s main events. 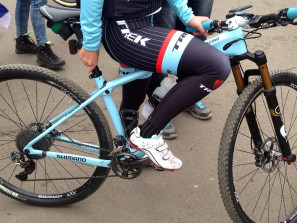 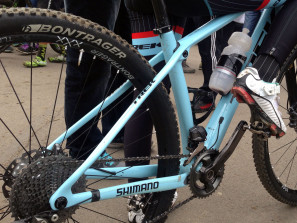 Again the men on the Trek Factory Racing Team got red bikes, while the women got baby blue versions that matched their kit. Otherwise the bikes look the same. Modular internal cable and hose routing makes its way here again to accommodate electric and mechanical drivetrains with or without front derailleurs or chainguides. Because of ample room at the bottom bracket, the rear brake stays inside all the way back to the inside of the chainstay. Curiously, in addition to the internal routing for the brake, on the outside of the chainstay there were also a pair of grooves to attach something externally with zip ties. We suspect that is a prototype carry-over of external brake routing, but are unsure. 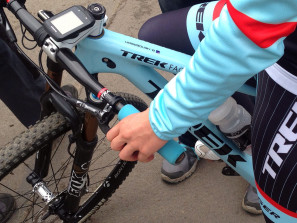 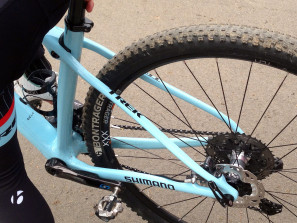 When applying the IsoSpeed tech to off-road use, Trek has gone a slightly different route with tube shaping. This new hardtail does include some relatively small seatstays to allow some vertical compliance, but the big movement here looks to come from a drastically flattened lower section of the seattube that should give pretty noticeable bump absorption at the saddle.

On the red bike above the external downtube bolt is there again, likely for a battery due to the curved and flattened seattubes. Having a battery in this normal location could possibly have a negative affect on the independent flexing of the seattube. A post mount disc brake is mounted inside of the seatstay, directly onto the chainstay and dropout allowing the seatstays to remain symmetric and lighter to allow for vertical flex. And like the Top Fuel, rear hub spacing is Boost 148 as is indicated on the hubs.

Stay tuned, as we anticipate full details on the new bikes sometime by early July.

I remember a Trek I had years ago, one of the first front suspension bikes, in this red color. It was such great bike until it got stolen. Must give one test ride when they’re released.

Those hardtails look very nice, I bet my wife would like one…

Yawn?? you obviously haven’t ridden a bike with isospeed yet.. It’s phenomenal in the Boone and Domane, can’t wait to try this in a hard tail. I figured the Top Fuel would come back as a 650b.. Any one else wondering why her seat is so high?

Let’s see the hardtail available as a frame option with Project One paint choices.

The top fuel was the best bike I ever rode. Excited to see they are bringing it back. Hopefully in 27.5″ as well as 29″.

Interesting with adjustable BB setting and the stages for XTR.

Any close up shots of the hubs?

@ Yonez – Same reason she has a slammed stem; she is a tiny human.

@Yonez the shot of Rebecca Henderson riding the Top Fuel is deceptive. She is standing on the outside pedal and leaning to drop into a 120° off camber turn. Her leg isn’t extended in other normal pedaling shots.
@Bryce wheel size is pretty likely to be size specific with a bit of overlap. We didn’t mention it, but the Top Fuel Emily Batty had at the start was sporting 650b wheels with Maxxis Ikon tires.
@Patrik yeah we saw a bunch f riders over the weekend with M9000 stages setups. I’d guess they’ll be available pretty soon.

“Curiously, in addition to the internal routing for the brake, on the outside of the chainstay there were also a pair of grooves to attach something externally with zip ties. We suspect that is a prototype carry-over of external brake routing, but are unsure.”

on previous superflys those frames had the ability to run either internal or external rear brake hose routing, so it wouldnt surprise me if they’d done the same again.

Procaliber for the hardtail name.

I think you’ll have more info on the 30th May. Wasn’t there an banner for it at Sea Otter somewhere?

But there’s nowhere to hide my weed.

148mm rear axle? For a XC bike? Or have misunderstood?
Years ago Q Factor was all the hype, now, with narrower cranksets, the chainstays are going to get wider?
My stays are paintless because of the heel rub, with 135mm axle…

Bring that ISO speed coupler to the Farley’s, THEN you’ve got something!!!

Great looking stuff. I’d keep the Superfly name, and go with iso-Fly for the HT.

interesting that they use a standard seat post instead of a seat mast as on the domane/boone. the effect of suspension should be better with a seat mast. also, notice the digital di2 lockout front and rear..

that top fuel would be on my list, does it have 120mm of suspension!?

Both bikes were used at UScups a month ago! BR is slightly behind….although emails and twitter messages were sent…

@Bas: Seat masts would prevent the use of dropper seatposts.

Otherwise, the run the risk of overlap in travel/function unless the Fuel EX is going to gain travel. Then that could affect the entire line up to the Remedy and Slash.

Currently, Trek has a clean 20mm gap between each bike genre that makes the lines between usage pretty clean.

Those legs! Im so glad the baby blue is the woman’s team or I’d officially be bi-curious.