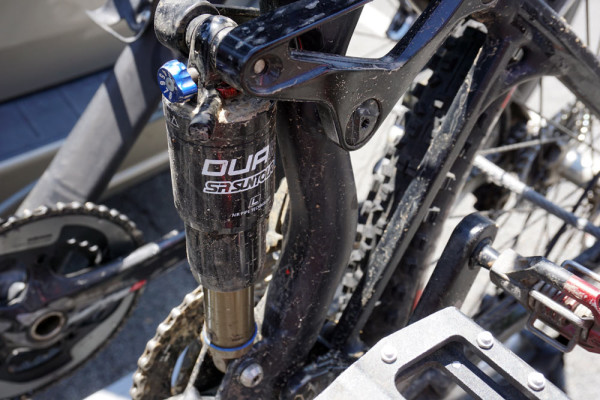 Two models will be available, the UnAir for shorter travel bikes, and the DuAir for longer travel. Internally, they’re identical on the LO-R (LockOut-Rebound) model, and DuAir gets a second RC version with wider range rebound and compression adjustments. Other than that, the key difference between the two is the DuAir’s external air sleeve, called a Pipe, that allows you to quickly and easily adjust air volume to tune the ride.

Both shocks share new piston and seal designs that not only keep it moving smooth when perfectly straight, they even reduce friction when side loads are placed on the shock. It’s an impressive package that could have you hopping down the bunny trail with a whole new smile on your face… 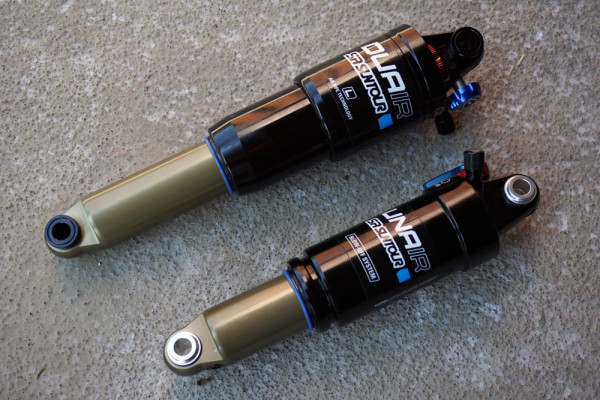 The DuAir gets an external expansion “Pipe” over the main air can that adds volume compared to the single chamber UnAir. 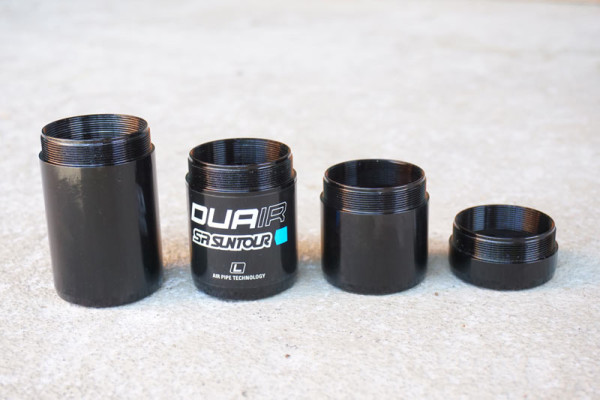 Pipes will be offered in small, medium, large and XL to change the air volume of the shock. In keeping with the brand’s QSP (Quick Service Product) philosophy, the Pipes can be changed very easily by simply unthreading it and sliding it off the bottom of the shock, then sliding and threading a new one on. Other than a strap wrench to loosen the pipe and allen wrench to unbolt the bottom of the shock from the frame, you don’t need any special tools and likely don’t even need to take the whole thing off the bike.

Another QSP aspect of these new shocks is that most parts are interchangeable between them, so things can be pulled from the other to fix something in a pinch. And it’s all relatively easy to disassemble and service. Assuming you’re comfortable (and knowledgeable), it’s even easy to change the shim stacks to tune the shock to your liking. 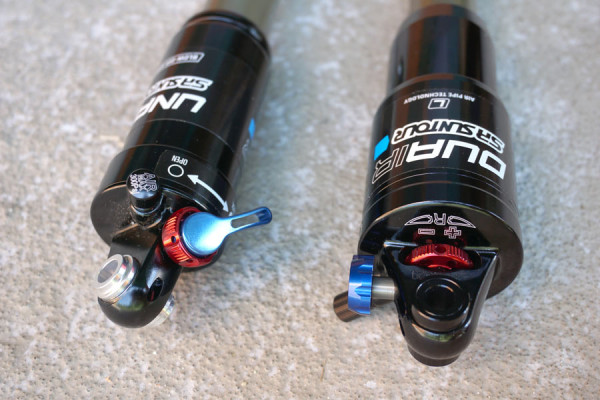 The UnAir is only available in LO-R trim, but there are two versions of that: LO-R with 100% lockout when the blue lever is flipped, and LO-R8 with 80% lockout force, which basically creates a very firm pedaling platform but still allows some travel. These are the ones that use the new shim stack design shown further below.

On the right is the DuAir with the higher end RC controls. The blue knob provides eight clicks of compression adjustment, the red dial is rebound. Rebound knob is a bit tricky to reach on some bikes (depends on where the mount is in relation to the rocker arm or other frame parts), but there are holes to poke an allen wrench into and turn it.

Because it’s externally adjustable, the RC’s piston design has non-adjustable shim stacks. But, those knobs provide a full range of adjustment across the entire range of wide open to virtually closed. On the LO-R, the externally tunable range is much smaller, and they set the start and end range of the knob’s effectiveness internally based on the bike it’s going on. (Imagine a scale from one to eight and the RC spans the entire range, but the LO-R’s rebound knob might only adjust from 2 to 5, or 4 to 7) 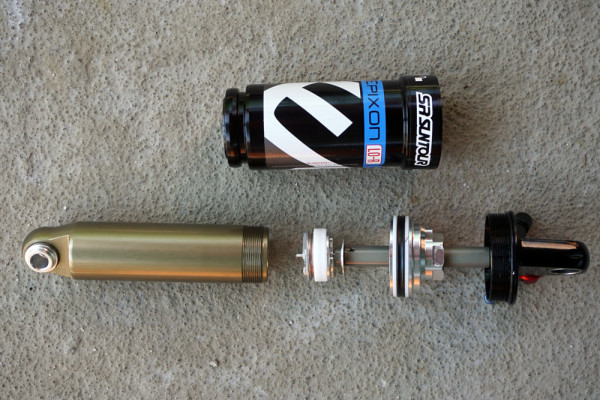 This relatively simple design makes the shock easy to disassemble. Of course, if you were to unthread the bronze-colored stanchion from the air valve, you’d want to bleed the nitrogen-charged chamber behind the IFP (internal floating piston) first, otherwise it’d blow apart and spray oil ev-ery-where.

On the bottom right is the stuff that makes it work:

The negative spring is air, and in a twist on the norm, it’s set at ambient pressure. The negative chamber is filled by simply assembling the shock, and that’s it. There’s no check valve between the positive and negative, which is what Fox and Rockshox use to equalize pressure between the two chambers (Rockshox calls this Solo Air). While it may seem as though that wouldn’t be enough pressure to help ease the shock into it’s initial stroke, it works. And it keeps it simple (QSP!) and eliminates any chance of the check valve’s machining on the inside of the air can from damaging the main piston.

At the bottom of the shaft is the IFP (not shown), which is filled through a green port on the backside of the lower shock mount (also not shown. I know, I know). 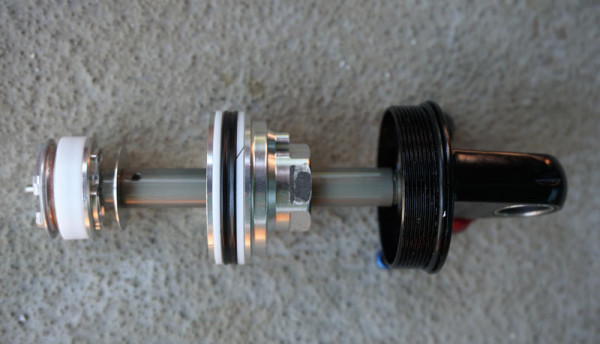 The Un/DuAir shocks get a new, improved main bushing (black ring in the middle) that has less stiction and improved reliability. The rubber O-ring O-Ring has a double lip design called Quad Ring, which not only reduces stiction but helps it move more freely because it’s not trying to flex and deform like a tradtional O-ring. And, it’s now sandwiched by PTFE bushings, which helps reduce the air pressure reaching the main O-ring, which further reduces friction because it’s not being squeezed so hard against the inside of the air can.

The damping piston (photo on right) has a PTFE bushing surrounding it, which reduces stiction by giving the piston the ability to flex 0.8º to accommodate for any lateral stresses put on the shock by frame twisting or flex. Because that small amount of flex is allowed, it also improves durability because things aren’t grinding together under lateral stress. Simple, brilliant. 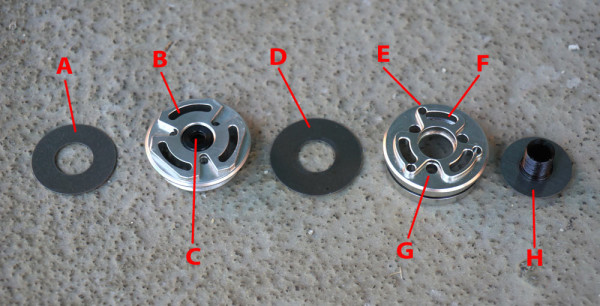 The heart of the system is the new shim stack damper. On the bottom is the blow off shim (A), which covers the blow off ports (B). Under normal riding, oil flows through the center of that circuit (C) to reach the compression and rebound circuit on the right. The lockout lever simply pokes a rod down into the center port (C) to close it and lock out the fork. The LO-R8 simply doesn’t close it off as much.

As oil flows into the main damping circuit, the compression shim (D) covers two sets of holes to control both low and high speed. The smaller holes at the outer edge (E) control low speed compression by letting oil flow through easier with minimal shim flex. But because they’re smaller, only a little oil can flow through. On bigger hits, the enough oil flows through larger high speed ports (F) to flex the shims more and let more oil flow through. Only one compression shim  (D) is shown, but it’s actually a stack of them that’s tuned to the particular bike it’s going on.

The three smaller holes closer to the center (G) are the rebound ports, which flow oil through to another shim stack (H) on the bottom side.

Here’s what they look like on the inside, showing how the rebound shim would sit flush on the rebound ports. Adjusting the rebound knob puts more or less pressure on that shim stack, changing how easily oil can flex it and thus the speed at which the shock rebounds. 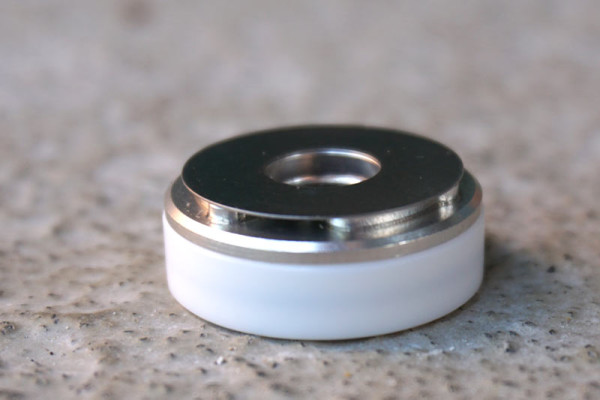 The compression shim stack sits atop the circuit, so when oil is flowing backward, it goes around it, into the openings and then into the rebound ports.

For aftermarket sales, the UnAir and DuAir shocks come with a base tune that’s similar to a middle-of-the-road Rockshox M tune, but SR Suntour’s U.S. office can tune it to your particular bike before shipping it out. DuAir shocks will ship with different size pipes depending on shock stroke and length, but other sizes are available aftermarket. The UnAir will come with eye-to-eye sizes up to 190x50mm, beyond that, the DuAir takes over. We’re waiting on pricing and availability and will update as we get it.

We’ve got one of the DuAir shocks in for review and first impressions are good, but now that we’ve got it back on home trails we’ll get a better idea of how it performs under familiar conditions.

The Raidon rear shock continues in the line unchanged and is offered mainly as an OEM product for lower priced bikes.

Huh. Who’d have thought Suntour would become a player in the suspension fork world and that Marzochhi would be no more? Times they are a changing….

I don’t know, the shorter stroke shocks seem like they need just as much adjustability as the longer where those bikes are more likely to actually be ridden up hill and as well as bombed down.

Looks like a very well designed and made shock; keen to hear how it holds up to further testing. The king is dead; long live the king! RIP big M…

I have one on my giant E bike. Front coil shocks takes no air and gives me nasty arm pump and the back shock doesnt bottom out. But having a hard time tuning. Also wish they’d have markings for sag on there shocks. Lastly like alot good brands I wish had a guide online or the shock for wieght to air pressure for less knowledgeable people to have a starting point. If I cant tune my in sokn or find reliable info I’m going to switch shocks. If anybody knows of anything email me at bmxplay2@gmail.com

I am pretty much an ignoramus when it comes to suspension valving, spring rates, and so on. But I am glad SR Suntour exists and that they make affordable stuff. They might not make the headlines and get tons of comments, but they do seem to make good stuff for a low price. It now looks like they have a chance to move into the higher-end market, as well.

Really cool article. Just for something different, I’ve been thinking of putting a Suntour fork and shock on my next bike. Talking to a few people with it, the performance rates as quite good.

@Tim I totally agree, it looks very promising. They’ve mostly been a player in the cheaper low-end segments, even though they have had some higher quality offerings too. Their Axon fork with carbon lowers and electrical lockout is pretty cool, but it’s understandable that it doesn’t sell so well when it’s priced close to an RS-1.

Remembering that oh so plush felling of the Marzocchi Bomber open bath from back in the day. Happy they are back in action, their latest single crown long travel forks are very good.

I bought a durolux shock to test, but the shock have a noise when return to his position (a knock), with the shock oriented with the adjustment upside, the shock have a very loud sound like bubble inside and the high speed response it’s a little hard for me. I tried to contact them to require information to open the shock and fix that (ifp depth, oil wt, there are not services manual and exploded view available), and information to bought the ifp tool (it’s not compatible with the rock shox tool, and use a very fine thread and can not find alternatives), but I never got an answer. That was my first and last experience with suntour.

Thanks for the review, Christian. Responsive service is an essential ingredient of a good company.