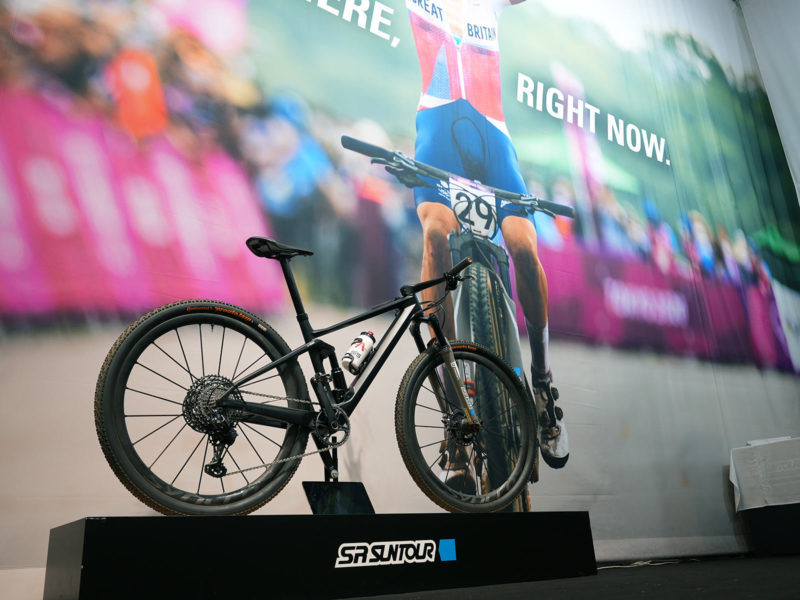 Tom Pidcock’s Olympic winning XC race bike had a couple prototype parts on its mixed-brand build, but the most secretive was the electronically controlled SR Suntour fork and shock. What makes it so interesting is the complete lack of visible controls, power source, or even sensors to pickup movement at the axle… 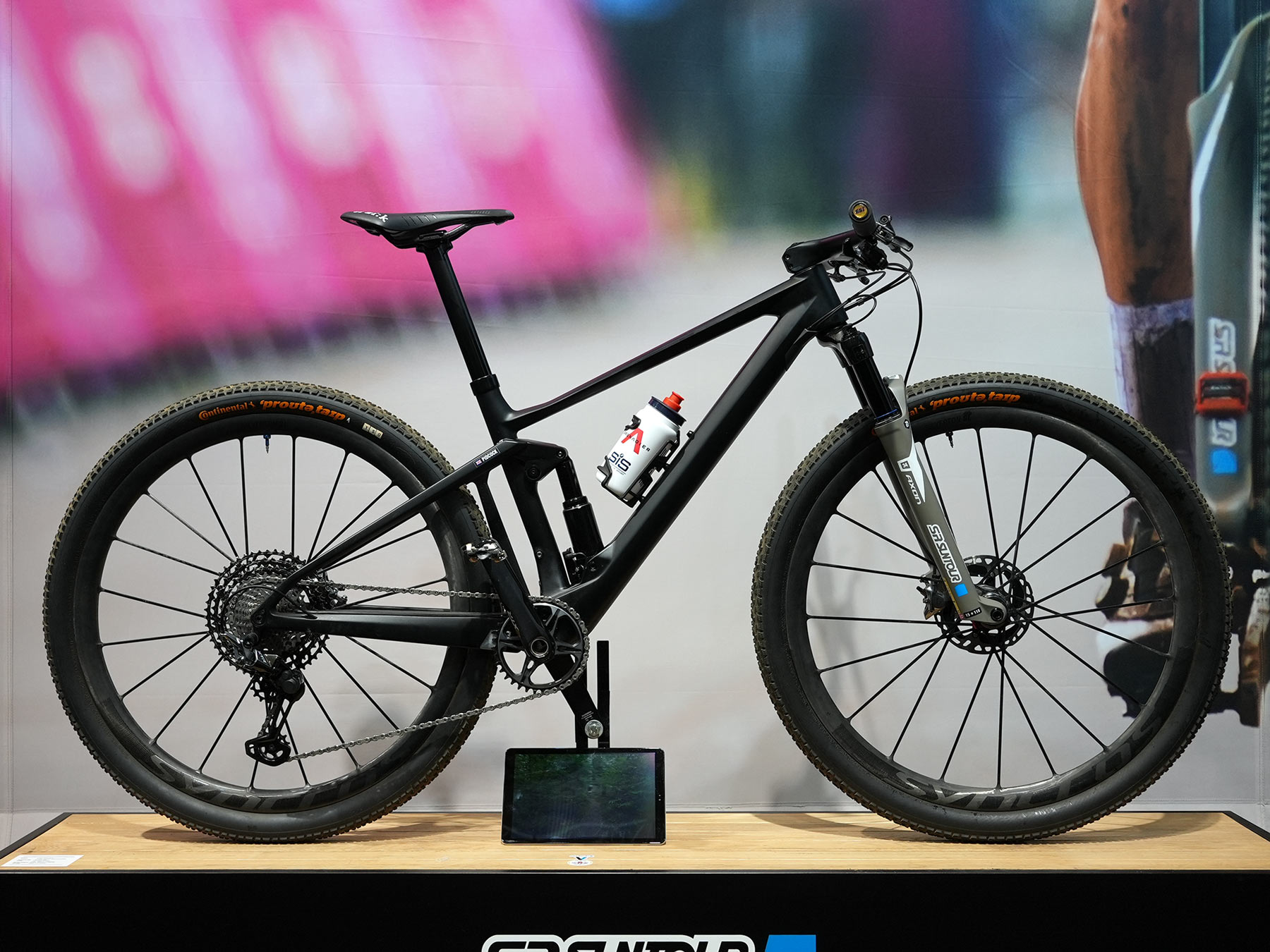 Top level, the bike is a BMC FourStroke stripped of its branding. Pidcock is sponsored by Pinarello, but without a current mountain bike, he needed something to ride. This gave him the freedom to build it up with some exceptionally light parts from an assortment of brands, but the base is the 100mm travel full suspension FourStroke 01 launched in 2018. 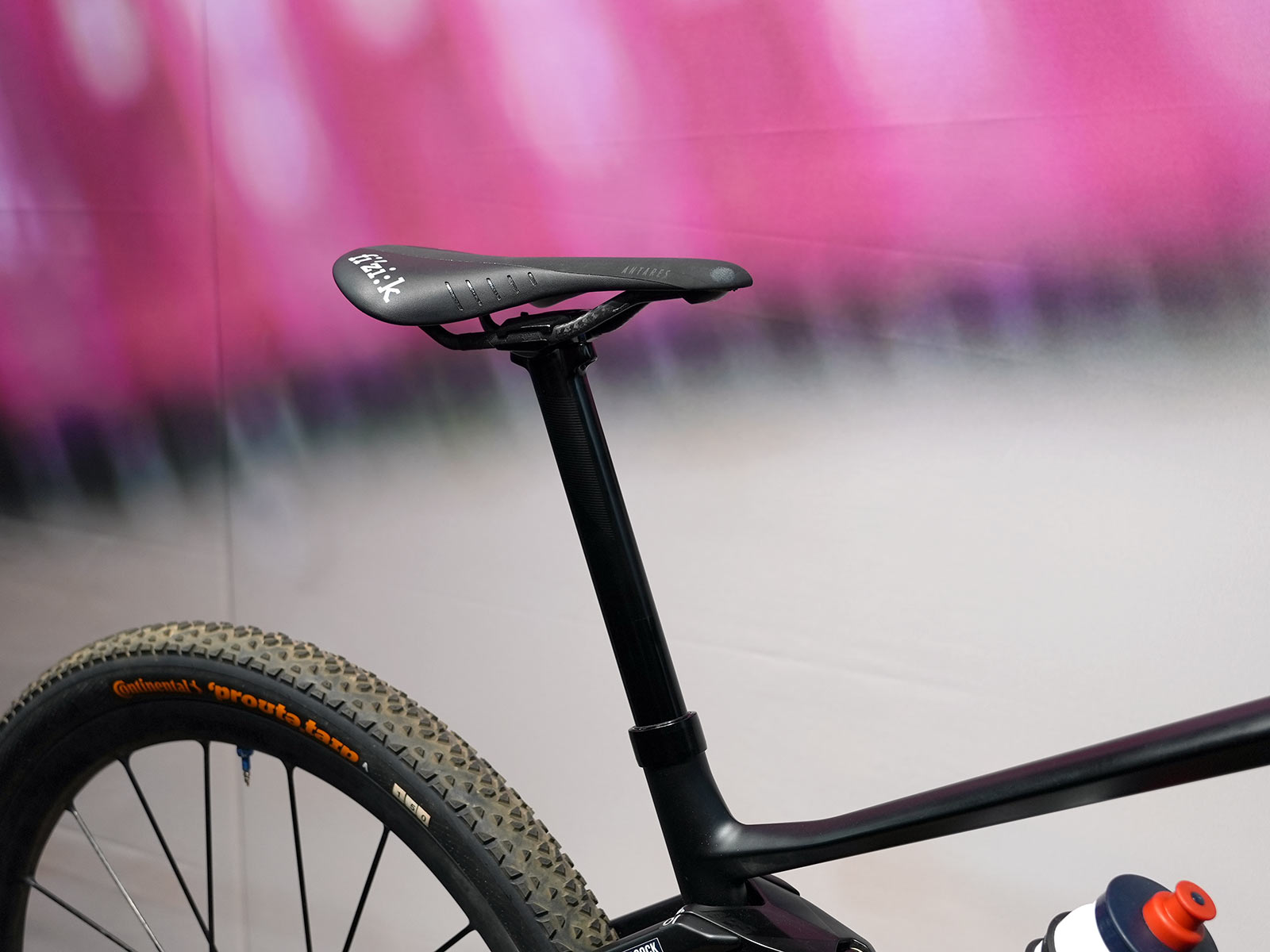 What makes this bike unique is its integrated dropper seatpost, offering 80mm of travel without the usual stanchion in a post design. Instead, an ovalized seat tube slides up and down directly through a seal at the seat tube’s opening, where the collar normally goes. It clamps into position to set saddle height further down inside the seat tube. Check our story about this bike to see how it works in more detail. 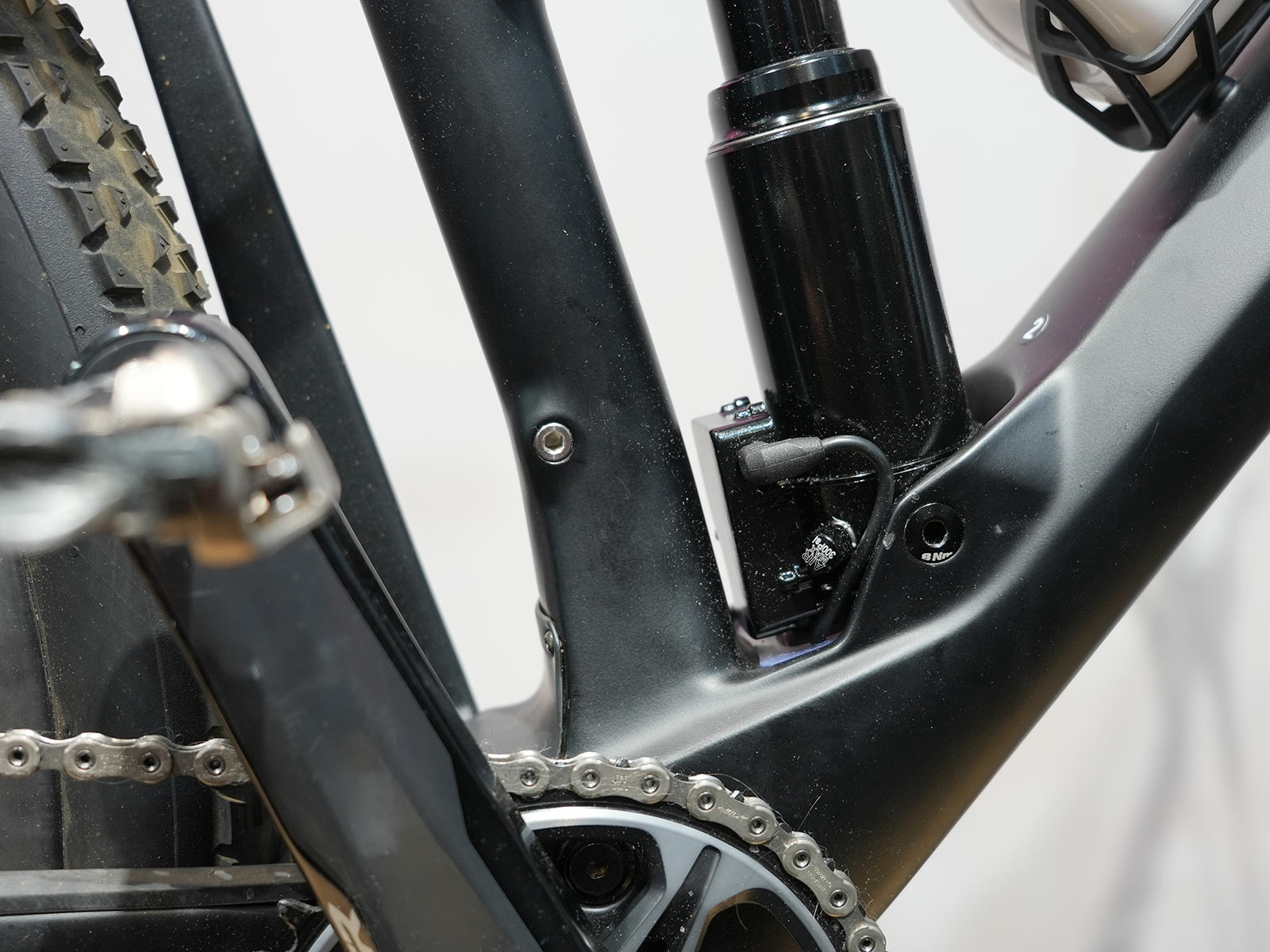 SR Suntour outfitted it with an unmarked rear shock that had a small electronics box attached to it. 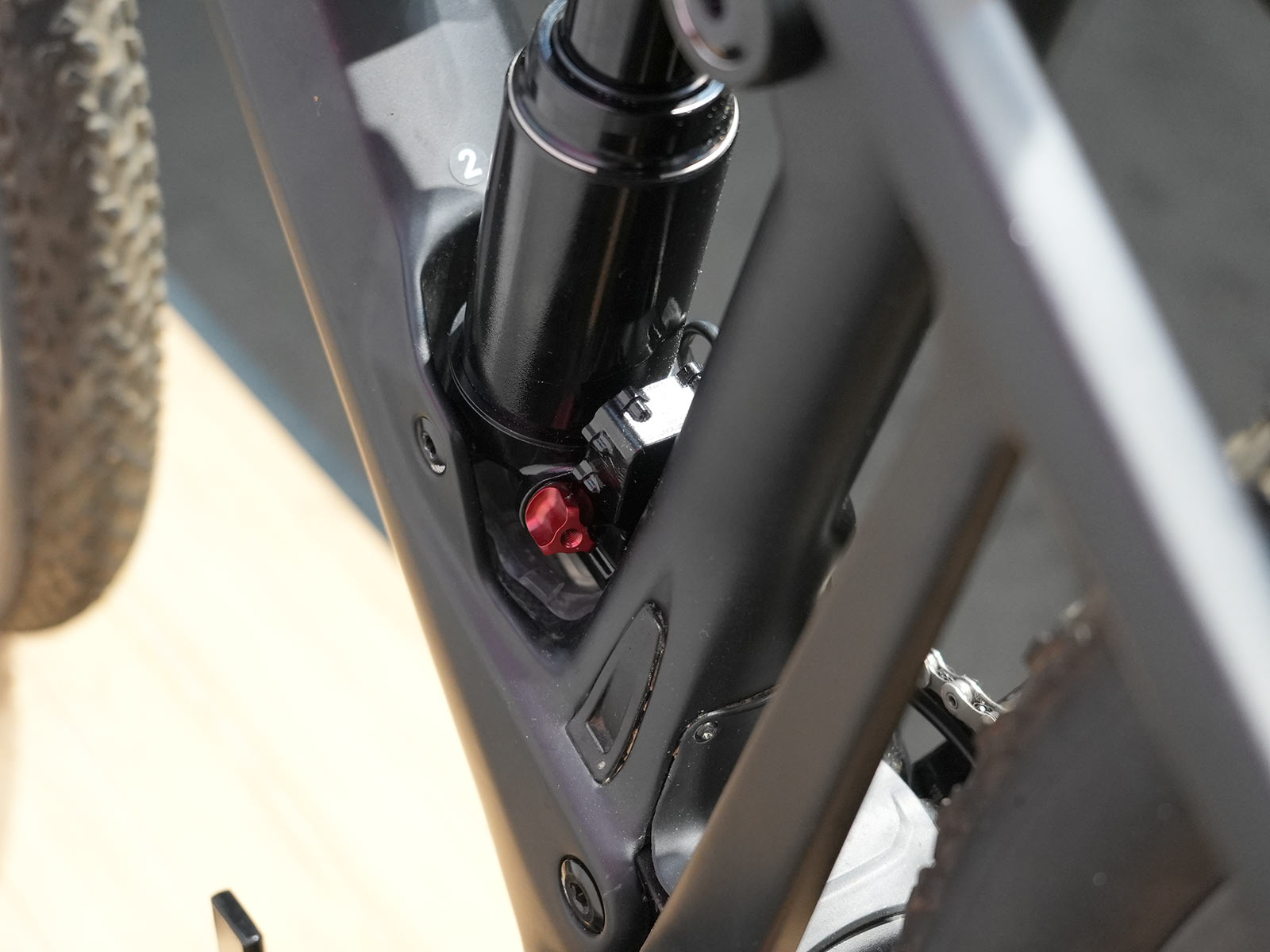 From the looks of the air can’s shape, it’s their Edge Plus inline rear shock, which has a slightly larger air volume than the standard Edge shocks. The electronics box sits where the compression damping controls would be, suggesting it’s adjusting compression damping for the rider. The red rebound knob keeps that setting external, and manual. 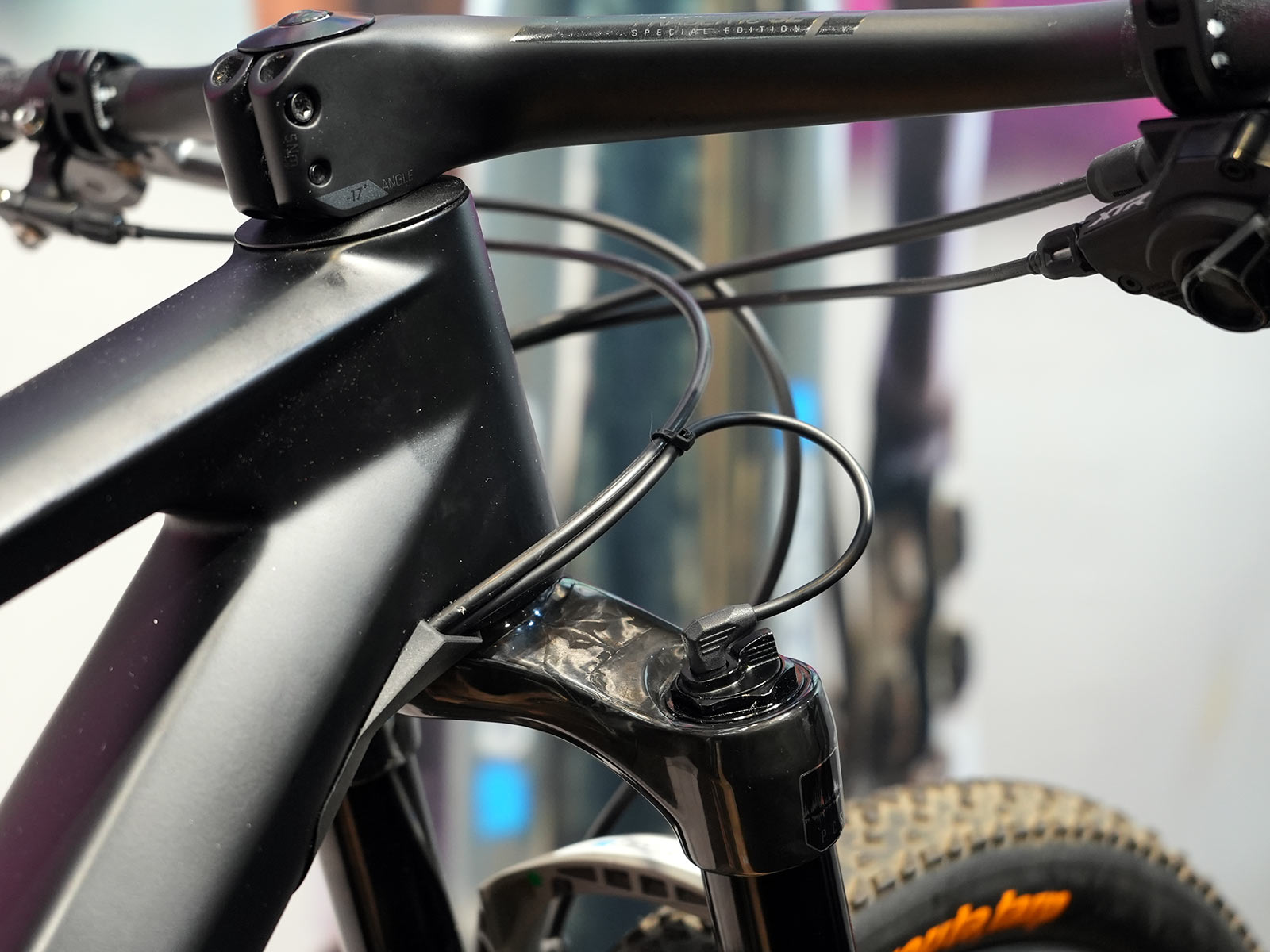 Up front, a single wire leads to the top of the fork, again where compression damping controls usually go. The cap is fixed, there’s no adjustment (even though that tab looks like it would be used to turn the dial), so it’s relying entirely on the internal electronics to control the damping. 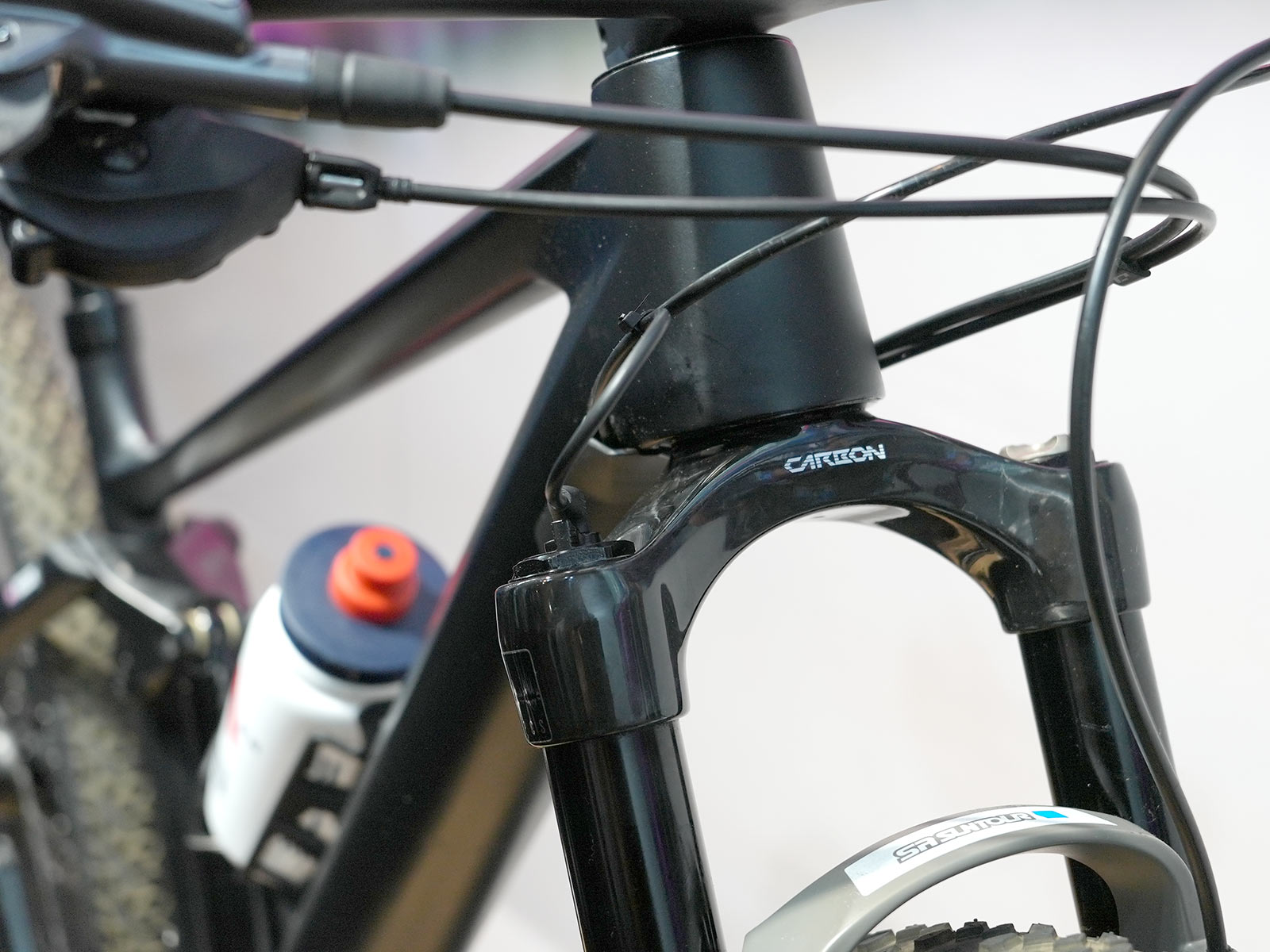 The AXON Werx 100mm travel fork uses 34mm stanchions for added stiffness, and gets a carbon crown on this top model. 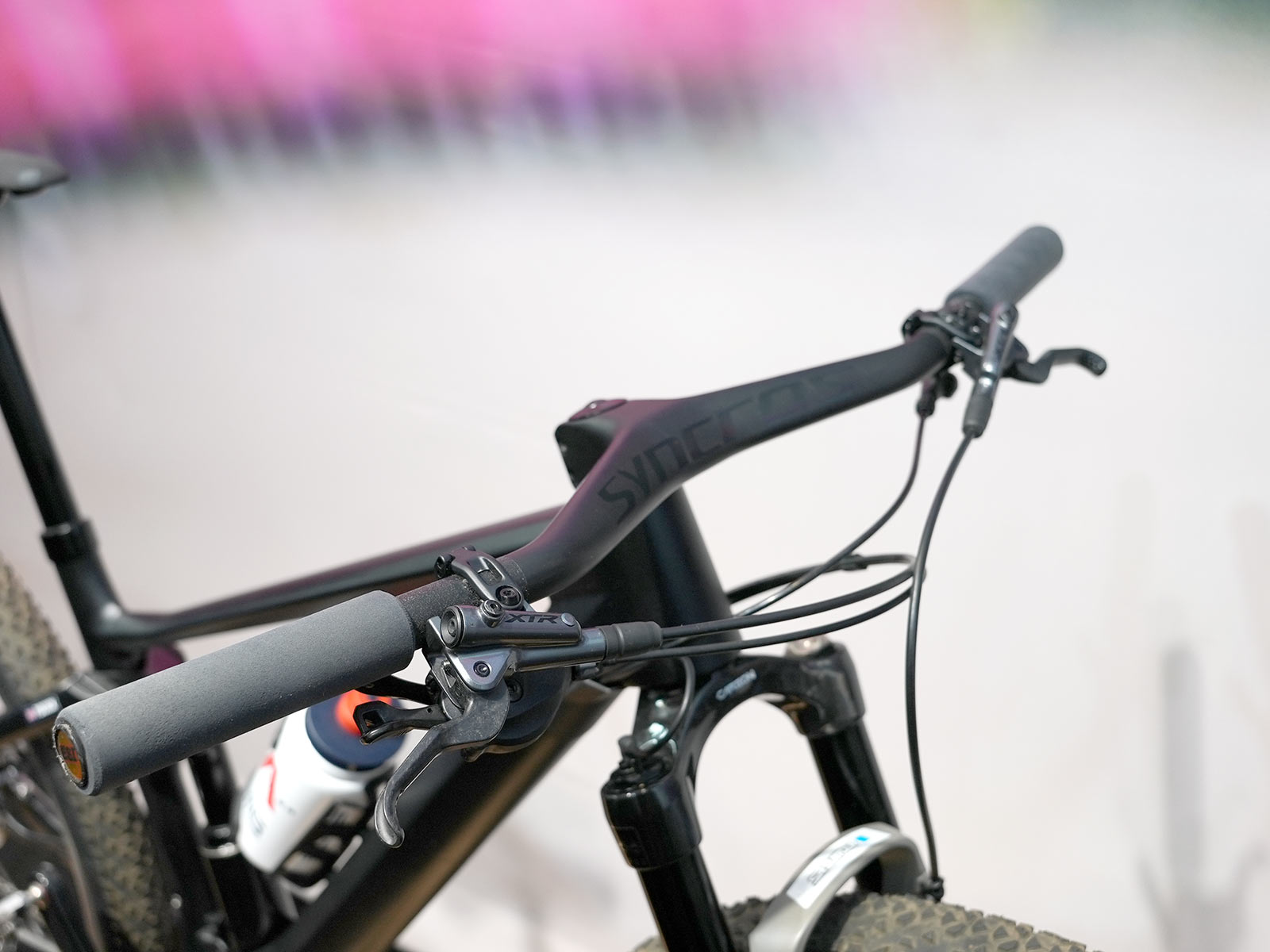 The system is completely absent controls, buttons, or external inputs that we could see. Unlike the Fox Live Valve system that has wheel motion sensors on the fork’s arch and the chainstay near the rear axle, this one seems completely self contained.

Unfortunately, they’re keeping all details of the system fully contained, too, as they’re waiting on patents to get approved before unveiling how it works. Wires feed into the frame from both ends, but there’s no sign of a battery, so whatever is powering it is either hiding in the frame, or fit inside one of the components. 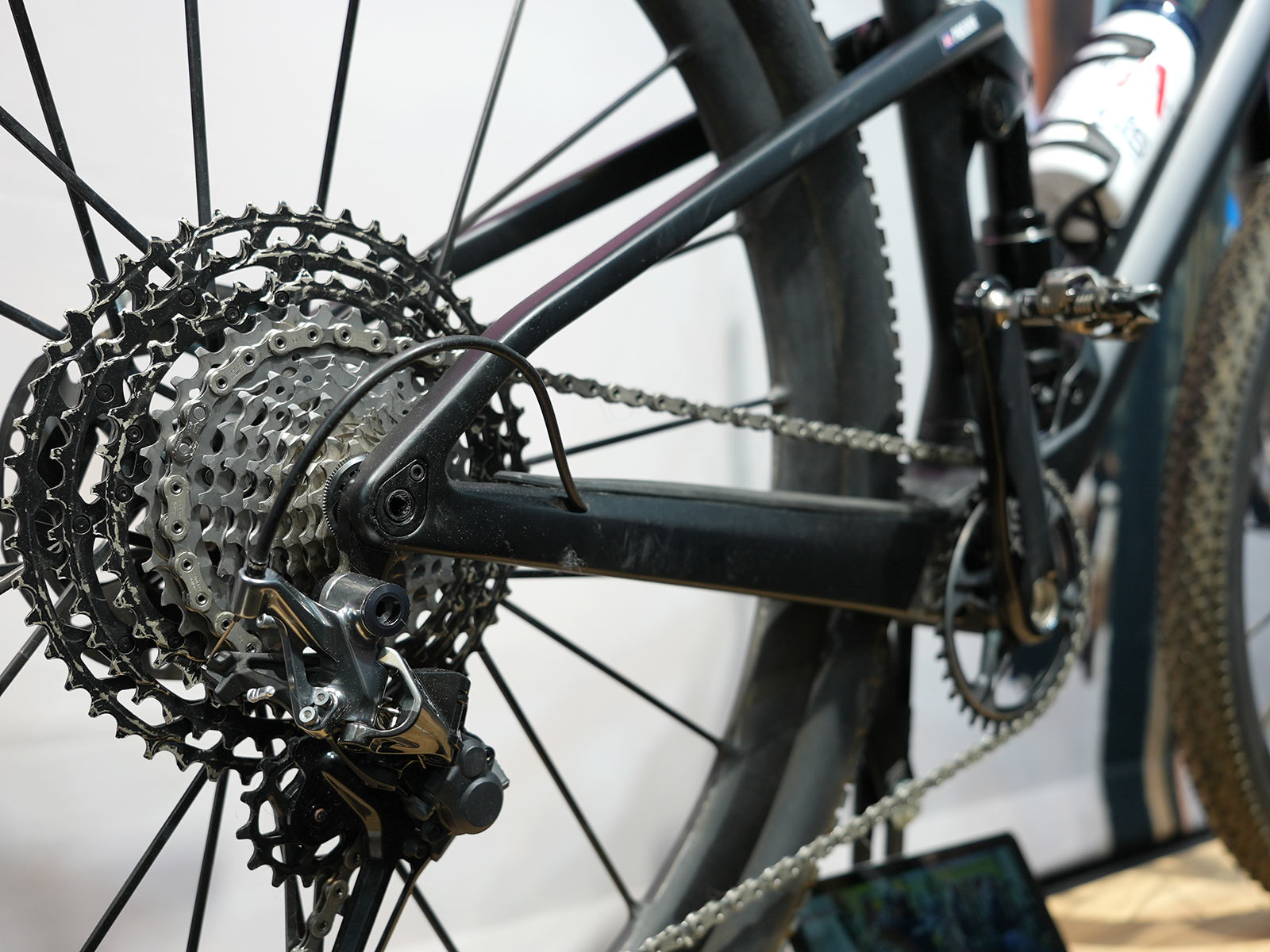 The drivetrain and brakes are Shimano XTR 12-speed, including pedals. 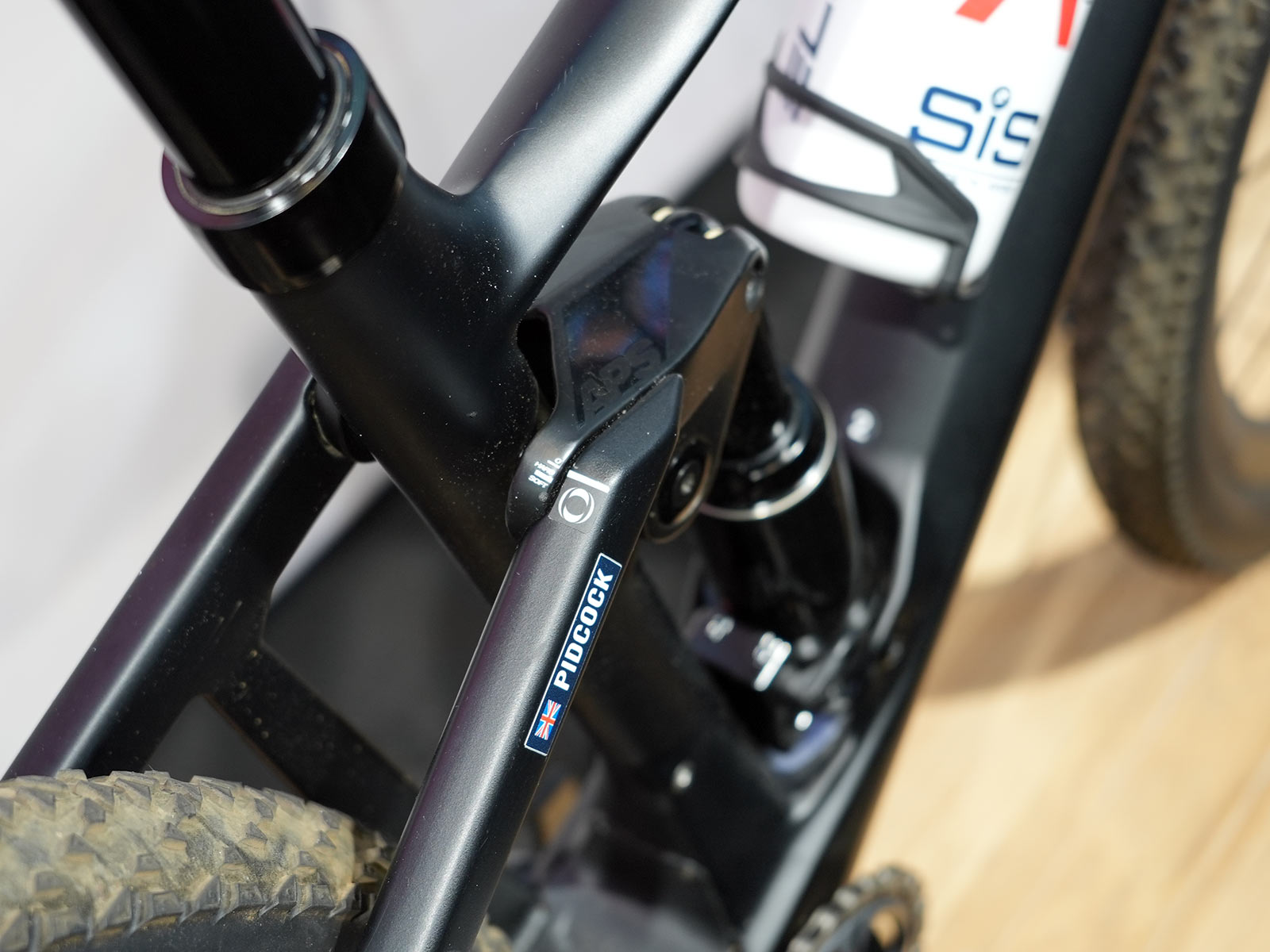 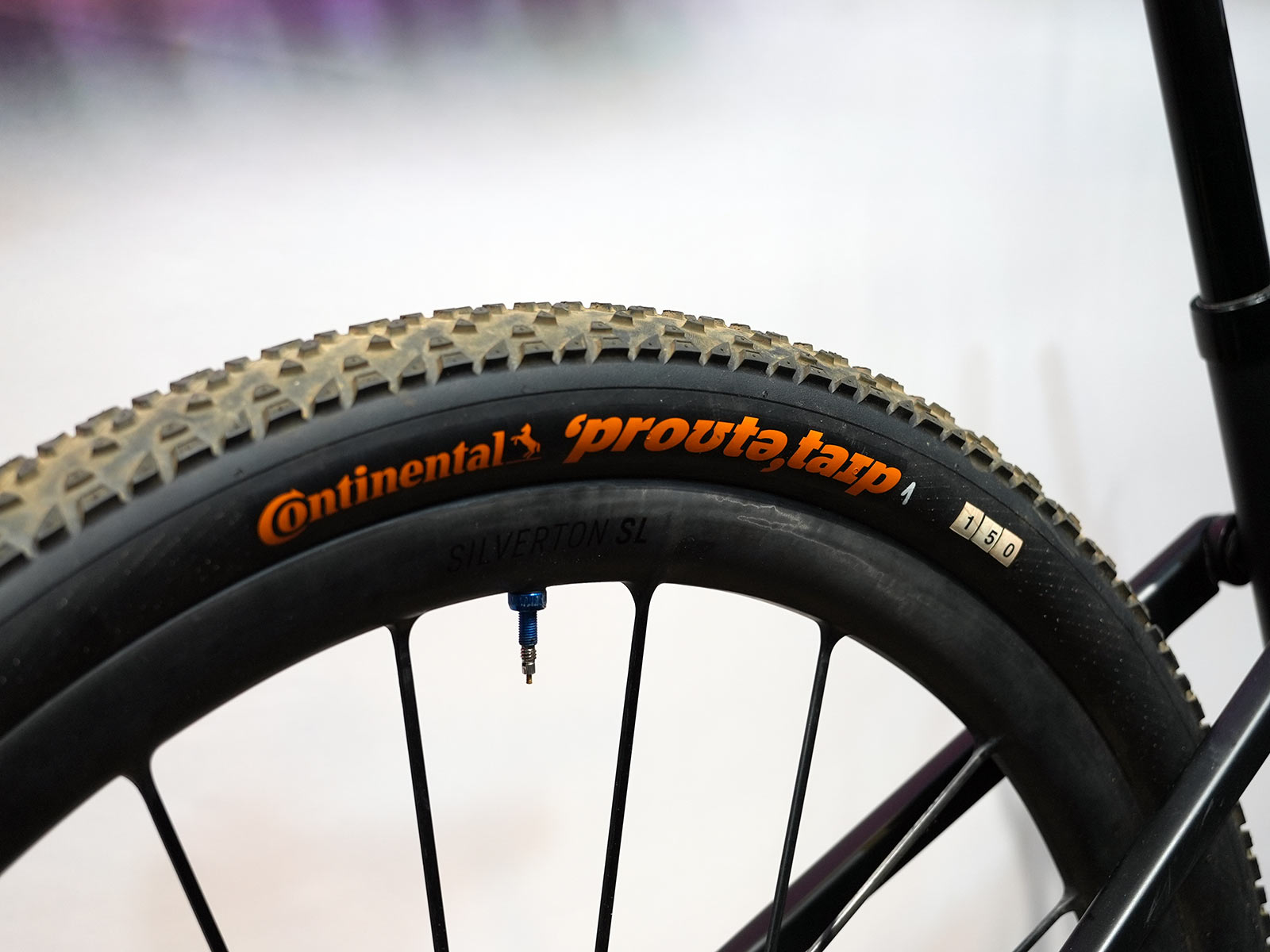 These Continental ‘prout,taip (which, as best we can tell, is simply a quasi-phonetic spelling for ‘prototype’) RaceKing tires don’t give away much, but the “150” on the sidewall suggests they could have a lighter weight, pro-only 150tpi casing. It could be that they made a slightly larger volume tire for him, too, as many racers are looking for that extra edge in traction and comfort.

The current top-level consumer RaceKing uses a three-layer 180tpi casing with additional 120tpi layers on the sidewalls for enhanced cut protection. While those are all very high end, fine-gauge casings, that’s also a lot of layers…but still only comes in at a claimed 580g weight for the single 29×2.2 size.

Pidcock’s wheels are the one-piece, full carbon Syncros Silverton wheels. These use carbon fiber spokes that blend directly into the hub shell and the rim. Originally launched in 2018, these wheels were recently updated with wider rims and are what Kate Courtney and Nino Schurter are racing, too…and they’re just 1,250g claimed for the set!

Stay tuned, we spotted some new products from SR Suntour for 2022, coming right up…

the text on that tire is as close to the international phonetic alphabet and standard linguistic phonetic transcription as one can get. do y’all know what y’all’re talking about?