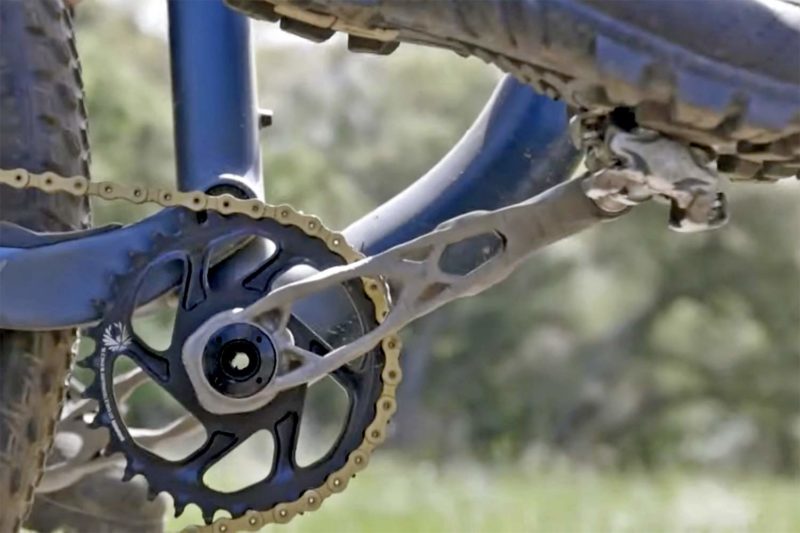 SRAM is starting to reap real, usable crankset prototypes from their development partnership with Autodesk via their Generative Design Field Lab in Chicago.

When and to what extent we’ll see a completely reimagined SRAM crankset come to market based on this Ai design process is still up in the air. But there’s no ignoring that SRAM has put a lot of work into this new design approach, and they’ve been ride testing several iterations of mountain bike cranks designed by machines, out on real trails…

Using Autodesk generative design, SRAM was able to start from a blank slate and let artificial intelligence dictate the optimal form for the prototype crankset based on the active forces in a crankset and various automated manufacturing processes.

So far it seems SRAM has used the automated design process to develop both CNC-machined alloy and additive manufactured, 3D-printed sintered titanium crankset prototypes. Both variants allow the Autodesk generative design software to make decisions based on the specific manufacturing technique, and both result in significantly different design solutions to the same problem. 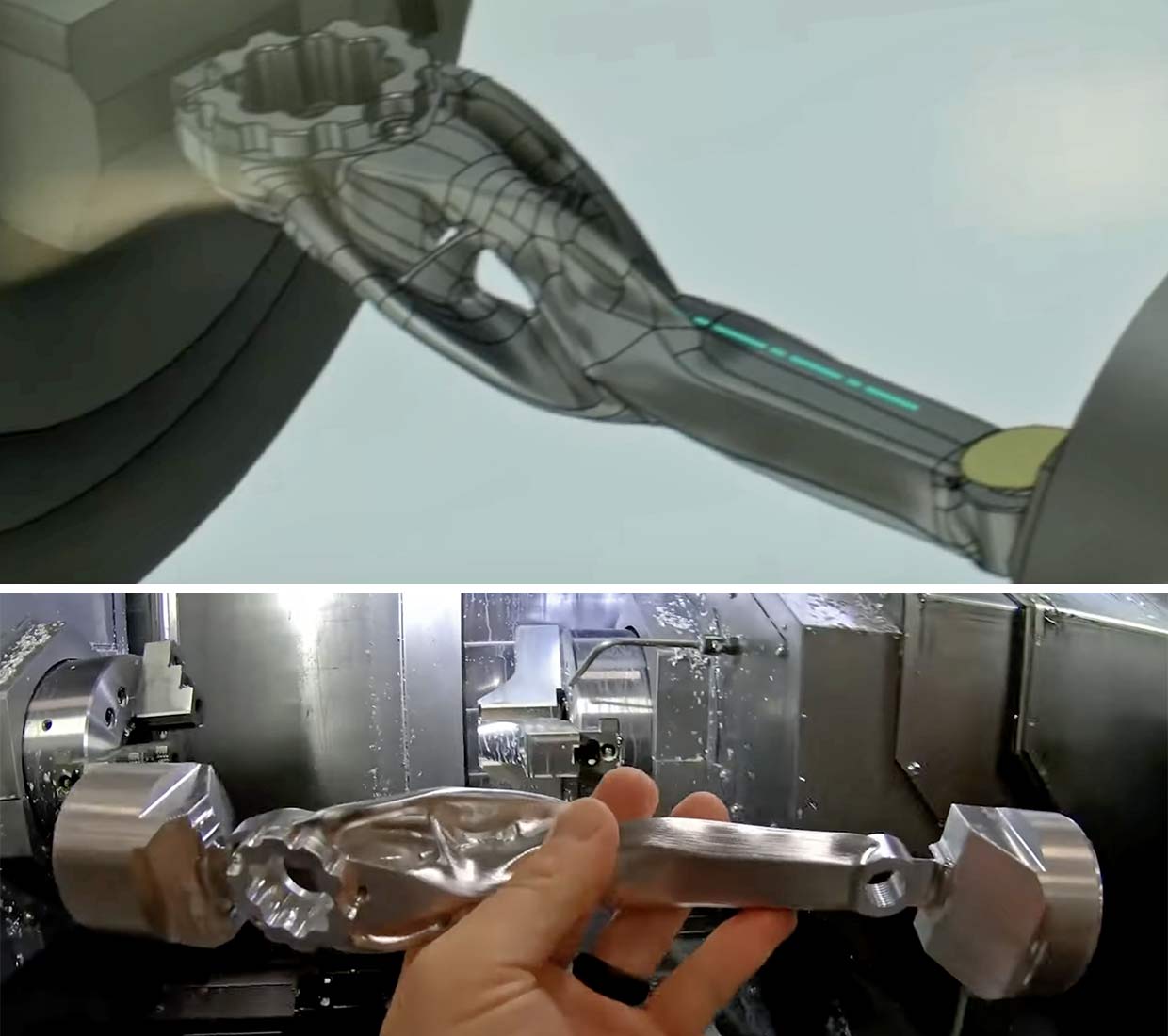 SRAM’s design engineers have been collaborating with Autodesk Generative Design since at least the start of 2019, as they’ve worked to develop a new approach to product design and optimization, at an accelerated pace.

Now they’ve also caught the attention of the manufacturing nerds at Forbes.

“If I think about the tools that I’ve used in my 18 years as a designer director at SRAM, not much has changed“, said Dhiraj Madura, Global Director of Industrial Design at SRAM. “We do a lot of iteration when designing parts, but sometimes it’s not going very fast in the time cycle that we have… As our products get more complicated, we’re going to have to look at new methods and new tools.” 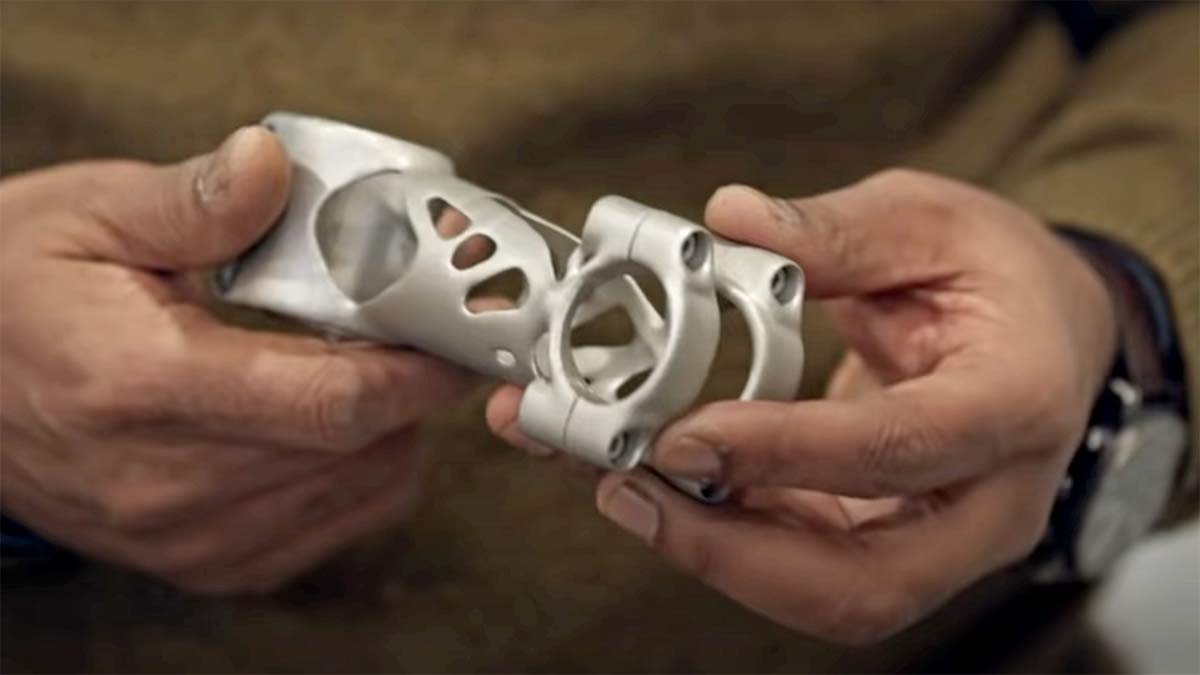 It hasn’t only been cranks either, Autodesk shared this image of Madura holding a similarly generative design stem prototype a couple of years ago, too.

The crank prototype project seems to have started only at the start of 2020, with the SRAM & Autodesk teams working collaboratively remotely thanks to the cloud-based nature of Autodesk’s Fusion 360 modeling software. 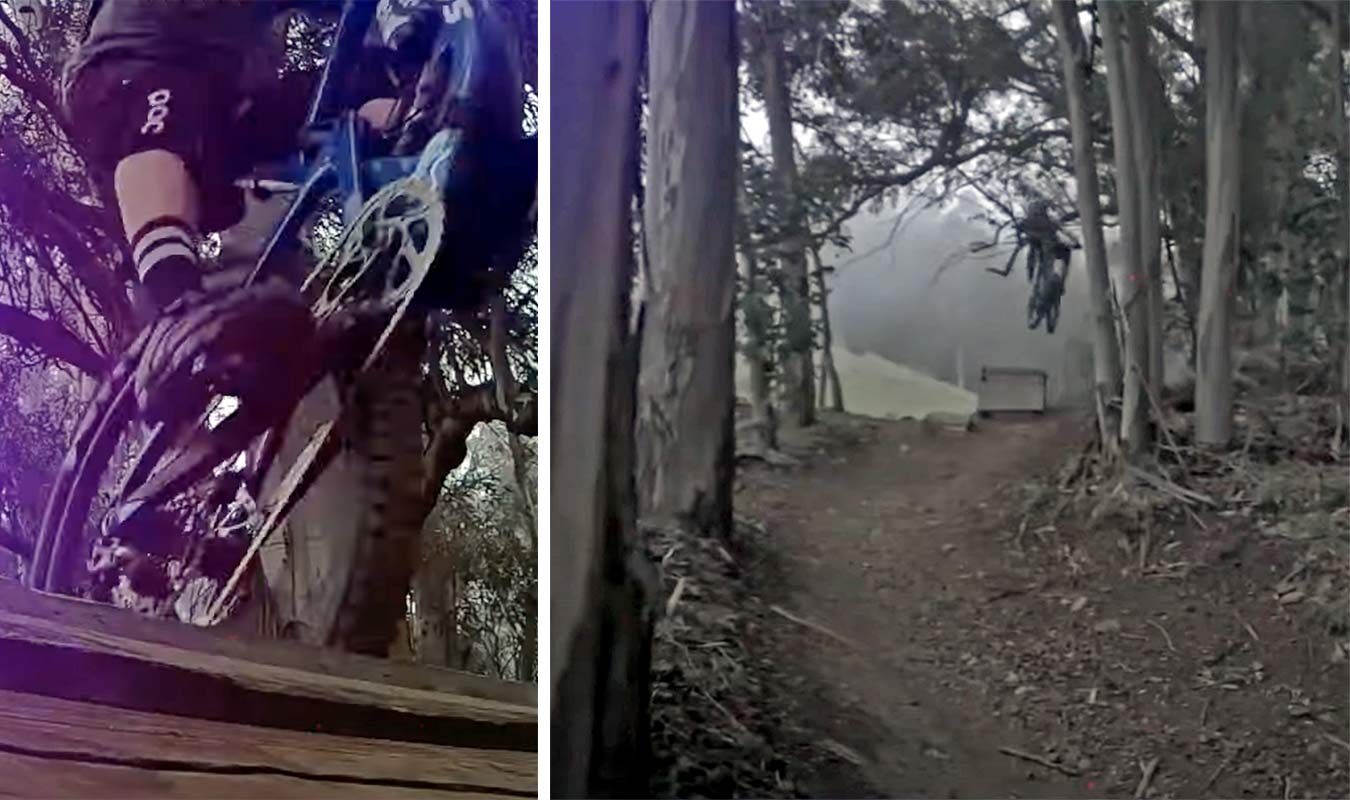 While the footage in that 2 1/2 minute video above is most deliberately short on fine details, it’s clear SRAM has been putting several versions of these AI-designed prototypes through their paces. 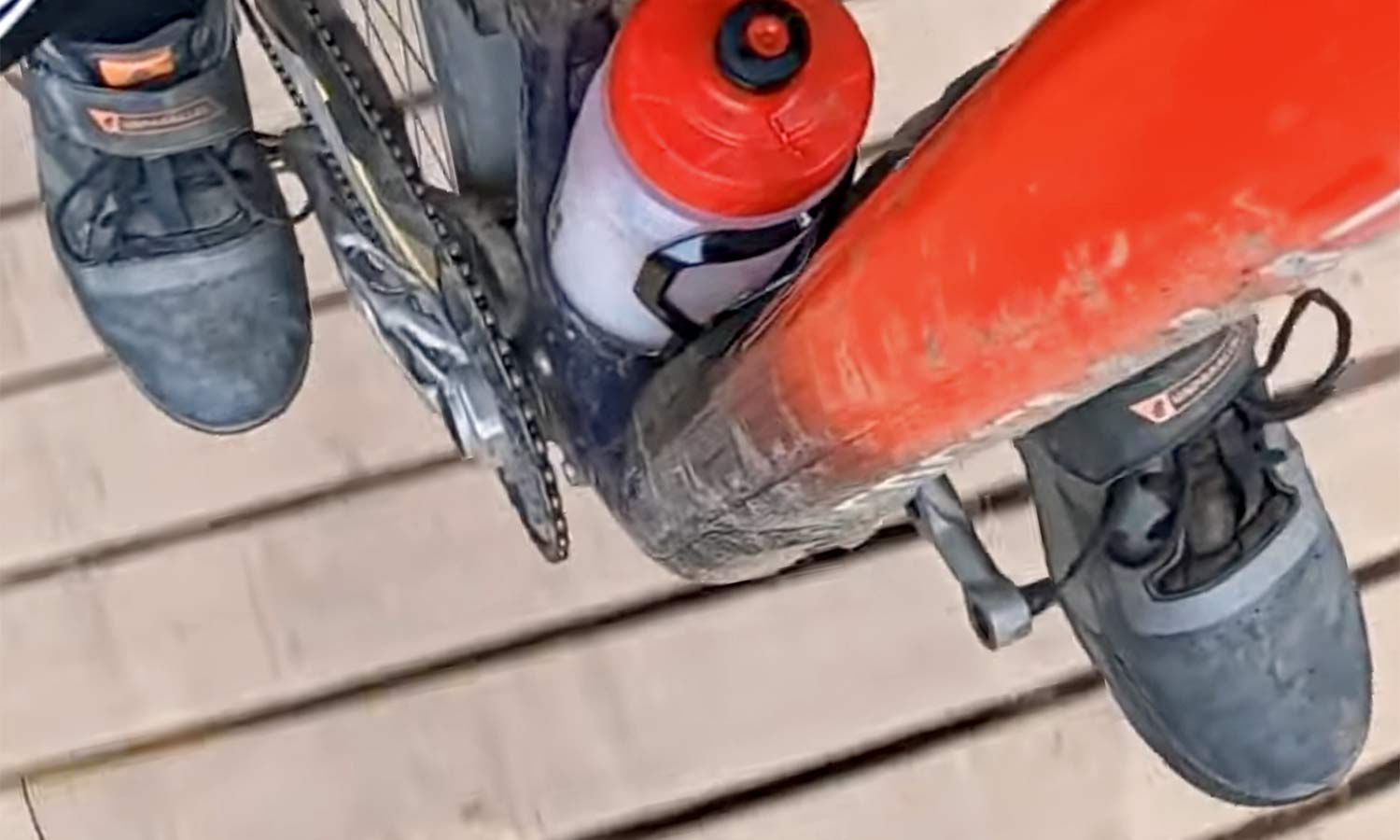 And the test riders don’t seem to be taking it easy either, appearing to spend time riding singletrack and a number of bikepark-style technical features. 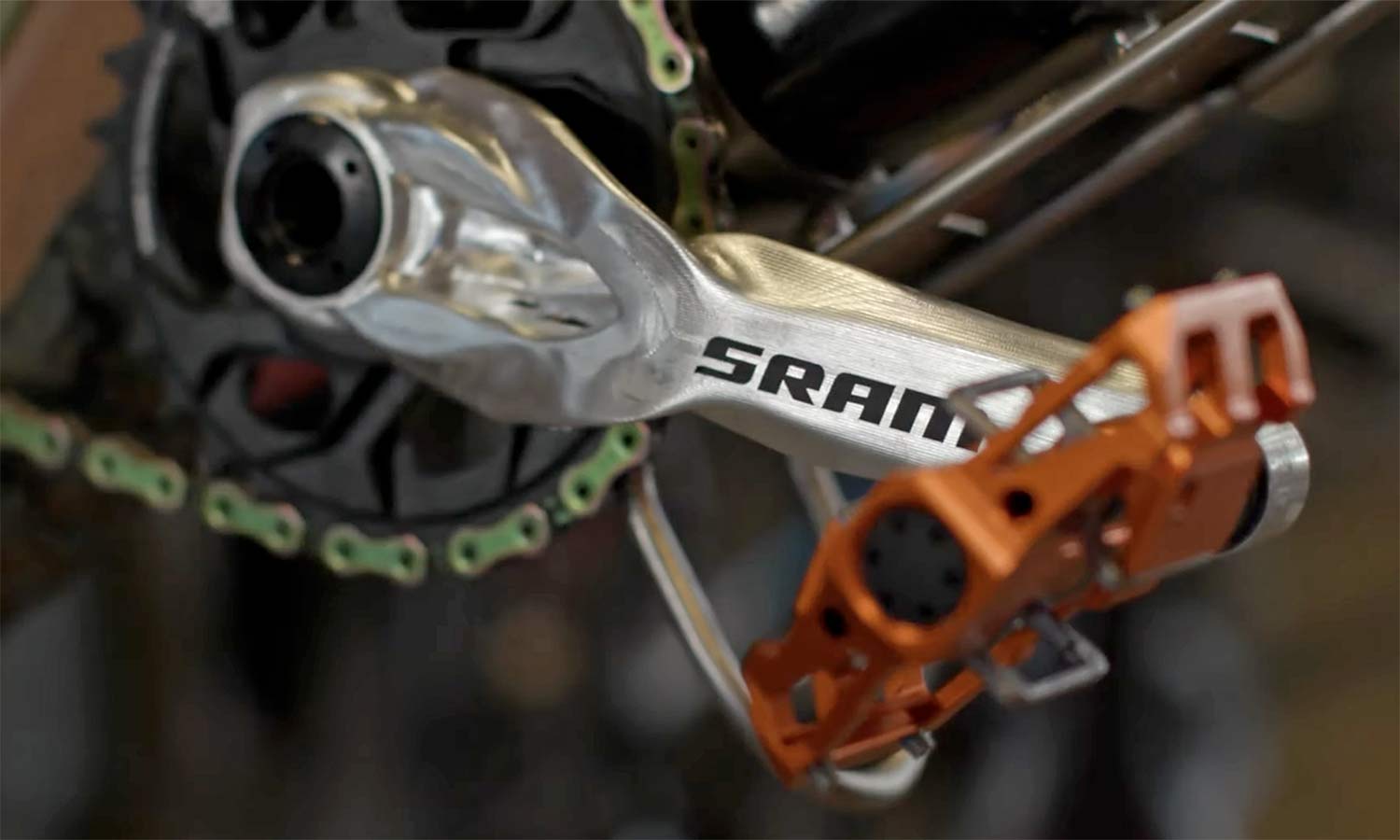 Interestingly, one of the generative-designed, CNC-machined SRAM crank prototypes looks a bit similar to the conventionally-designed Ignite Catalyst cranks we discovered back in early March (which you can already buy now). 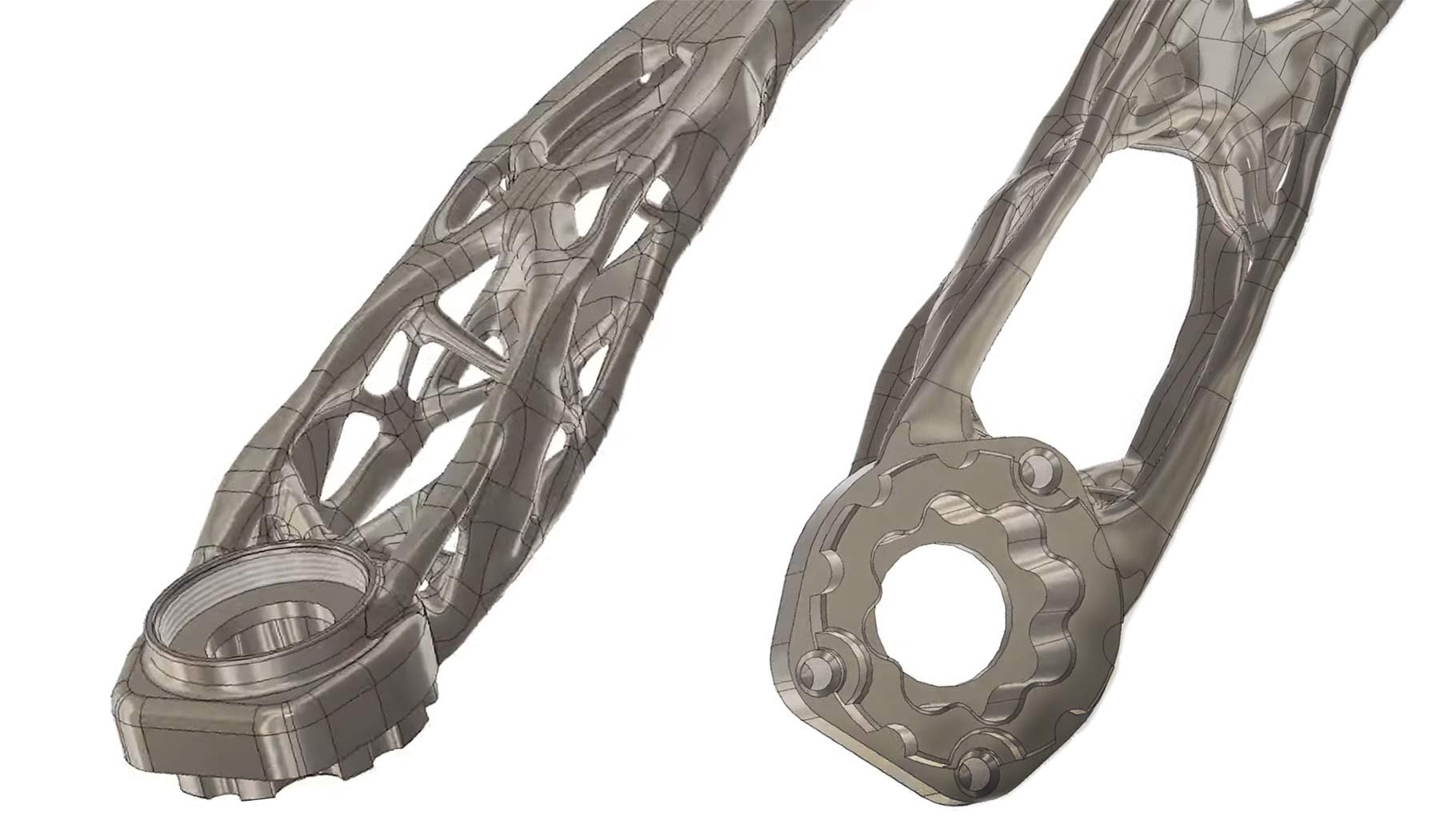 Working in the cloud-based Fusion 360 platform, SRAM engineers start with constraints like their standard direct mount chainring interface & DUB bottom bracket at one end, and pedal spindle at the other end.

The design forces get calculated in and out comes a SRAM+Autodesk prototype crank arm design that can hollow out unnecessary material, leaving a lattice of Alien organic-looking struts that evenly carry loads and maintain stiffness from pedal to drivetrain. 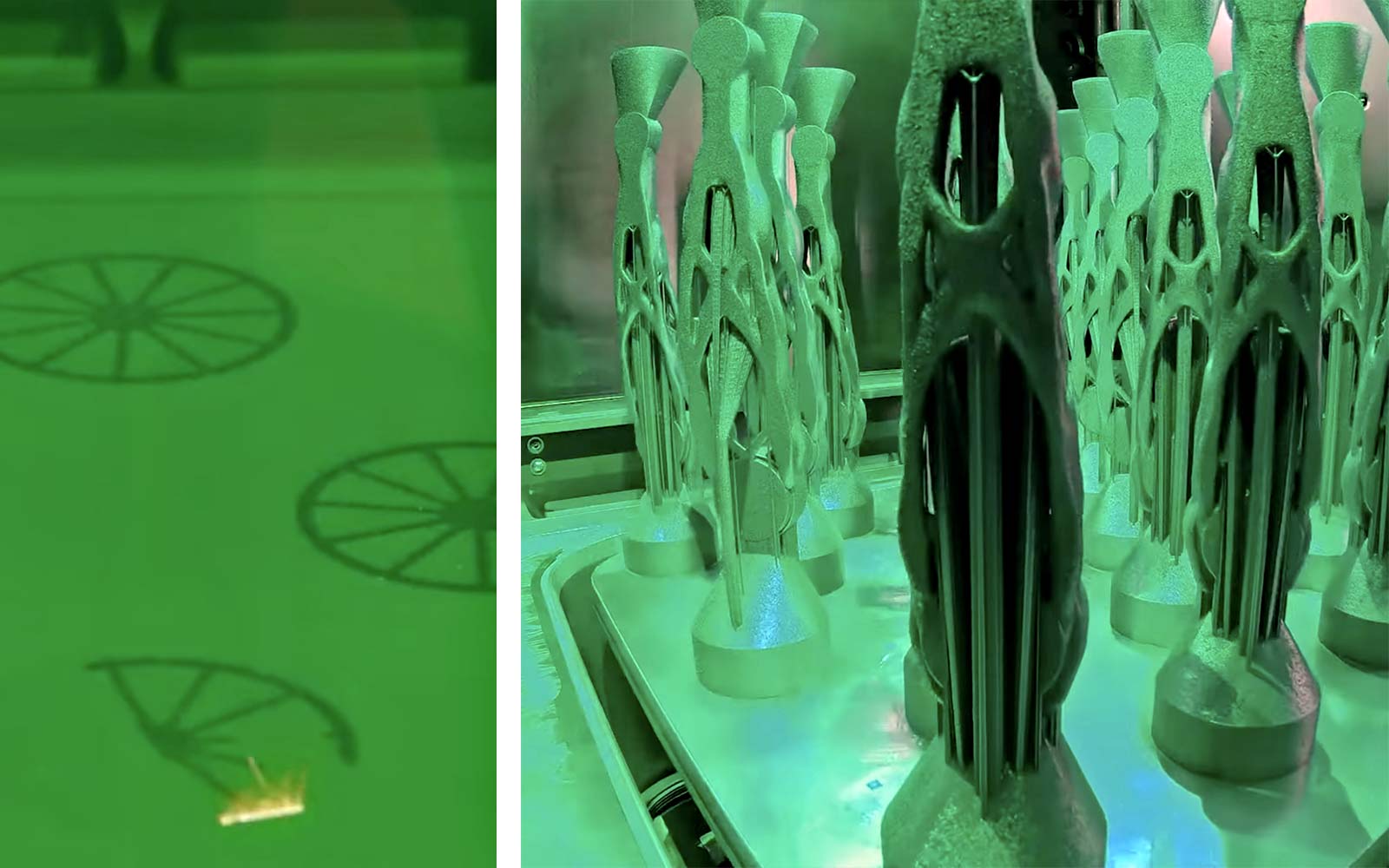 The 3D-printed titanium prototype takes advantage of selective laser sintered additive manufacturing tech. Those focused lasers actually compact & harden titanium powder into a solid structure one little fiery burst at a time, heating it up just below the point where the material would liquefy. One tiny layer at a time, starting with the radial support structure (left, above), the process builds up until you have the completed crank arm structure (right, above).

That allowed SRAM to produce 9 complete pairs of crank arms in one 3D-printed batch, which then get the supporting inner structure removed, and both the pedal interface & BB/chainring interface CNC-machined in next.

SRAM told Forbes that these Autodesk generative design prototypes aren’t necessarily destined to becoming a consumer-ready mountain crankset, as much as they are about helping the engineering team understand how to evolve their next gen designs. But I think I speak for a lot of cyclists who would love to see a wild-looking crankset like become available.

We’ve reached out to SRAM for thoughts as to if or when we could hope alien-looking cranks like these might hit the market, but they haven’t commented officially yet. Think this all sounds familiar? We caught up with Autodesk partnering with Decathlon to explore 3D-printed aluminum bike frames based on generative design at the end of 2020. We’ve also seen tons of great 3D-printed titanium goodies in recent years, from the lightest-ever clipless pedals to a spaceship GPS-mount to aerobars to lots of ti frame details…

imagine a world without engineers… it truly sounds like a utopia.

Eggs Benedict
Reply to  nathan b

I’m guessing you’re not an engineer.

Haven’t we been warned about teaching machines to design and build more machines? This is how we get terminators, folks. That robot’s just punking SRAM with that exoskeleton crank arm design. That’ll be hunting humans soon enough.

Don’t forget I was also the kindergarten cop too and I ruled Kaaahliforrnia and now I am totally angry that I am not getting royalties from SRAM for the Cyberdyne design.

Last Sram video I watched they had all these young guys with crazy mustaches. This time, middle aged guys, no crazy hair. What’s the message?

It,looks,like something Gollum just crimped out

At what point does design become so optimized that it is no longer patentable? Fusion 360 is just a software suite that is offered to anyone. With multiple manufacturers using generative part design wont they just draw extremely similar shapes? Sure forces change depending on the use case but in the end its still just pedal input. Interesting to see where this goes

Someone forgot to program the software to optimize the crank design for torsional loading. The optimum design for a crank is a tube, which is why Shimano makes Hollowtech cranks. SRAM and Autodesk should be embarrassed by this. I am sure the Shimano crank department is having a good laugh at these.

A tube is optimal for pure torsion. An I-beam is optimal for pure bending. A crank has to support both. Plus the loadings at each end are radically different, and we don’t know what priority was assigned to weight and all the other parameters. A funky asymmetric box truss could be “optimal” for a specific definition of “optimal”.

to get pedantic, a circular cross section tube is best for torsion. A rectangular cross section tube does equally well handling torsion and bending, thus its use in crank arms. Additive mfg allows the material to be put in places that are not practical in other mfg methods, so the structure can indeed vary significantly from end to end. As a grad but not practicing engineer, the headline pic shows something that does not look efficient/torsionally strong, but FEA may well say something different. Example pics further down the story do indeed look optimized for torsion, especially down near the spindle, with heavy 3D shaping in the area.

Yeah Autodesk forgot to consult alloy cowboy. Shame on them.

I more or less agree with alloycowboy, apart that these “optimized” crank resist to torsion thanks to the 45° crosses. It’s actually just a tube with holes in it. It doesn’t need ai to give such designs, the problem is the manufacturing process not the design… Nice to make 3d printed cranks, but hollow carbon ones will be much cheaper and lighter. Always interesting to do some research, but if SRAM shows it’s for showing their skills, they know nothing will come out from this.

@mudrock Cracked, rather than bent. Because the shape is stiffer. The ultimate strength has more to do with wall thickness and material properties.
As Lyford above said: “optimal” for a specific definition of “optimal”
It’s all in how you define “optimal”, and that comes from what failure modes you can live with as an engineer, rider, lawyer for an OEM.

Dr Alex Moulton was on the right track, decades before AI CAD.

Think of all the little crank arm bags you can fit in these. Drubs everywhere. Or maybe a $600 Silca doodad.

Those look like real mud catchers to me. Interesting though.

How can you tell if an engineer is in the room? Don’t worry, they’ll tell you

Or conversely, is very familiar with the way SRAM is ingenious at finding new and surprising ways for parts to break or just plain suck.

Kind of astounded at all the hate for……..potential outside the box progress?!

Perhaps parents have banded together and started charging rent for those basements?!

Someone neglected to inform the Ai to design the structure to be damage resistant. Damage to any one of those tiny spars would occur easily, and be fatal to the structure.

On the other hand, if Ai can quickly put everyone out of work, it’s all totally worth it! Go computer!

AI design optimizations are really useful. You should really design a clean solid/surface model based around the results. I would never print the mesh result. Maybe for a part concealed from view.

but ….. where’s the integrated strain gages with batt power source for power readings??

Rubbish. I warned the industry in the 1920’s about moving away from cotter pins and look where we are now. The bikes have gotten WORSE. Innovation is the enemy. Keep doing God’s work complaining about it.

Ya made my day bro xD!