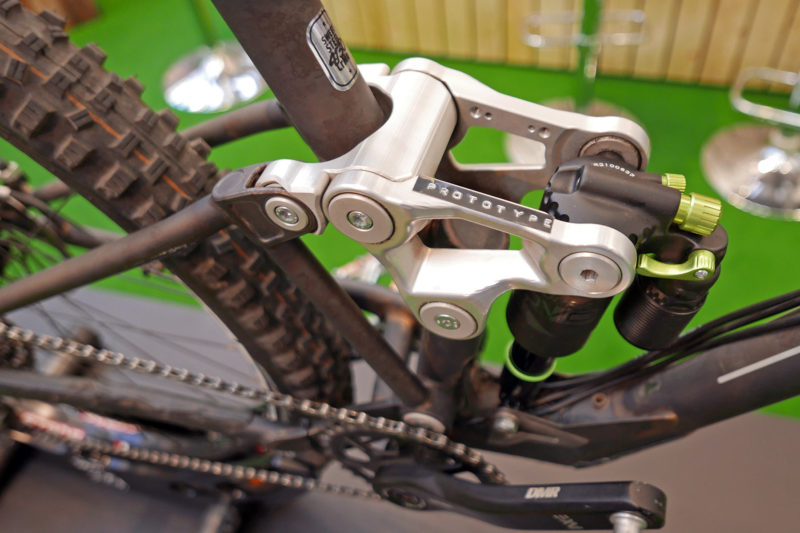 We already knew that Sour loves building bikes in steel, but a couple of new prototypes suggest they aren’t stopping at regular old hardtail mountain bikes and gravel bikes anytime soon. It’s not our first glance at the full-suspension Double Choc, but now we get an up-close look (and video of Timo Pritzel backflipping it!)  And those Cybercranks? Let’s just say that a modern direct mount tubular CrMo steel crankset would have a lot of applications both from gravel to trail… 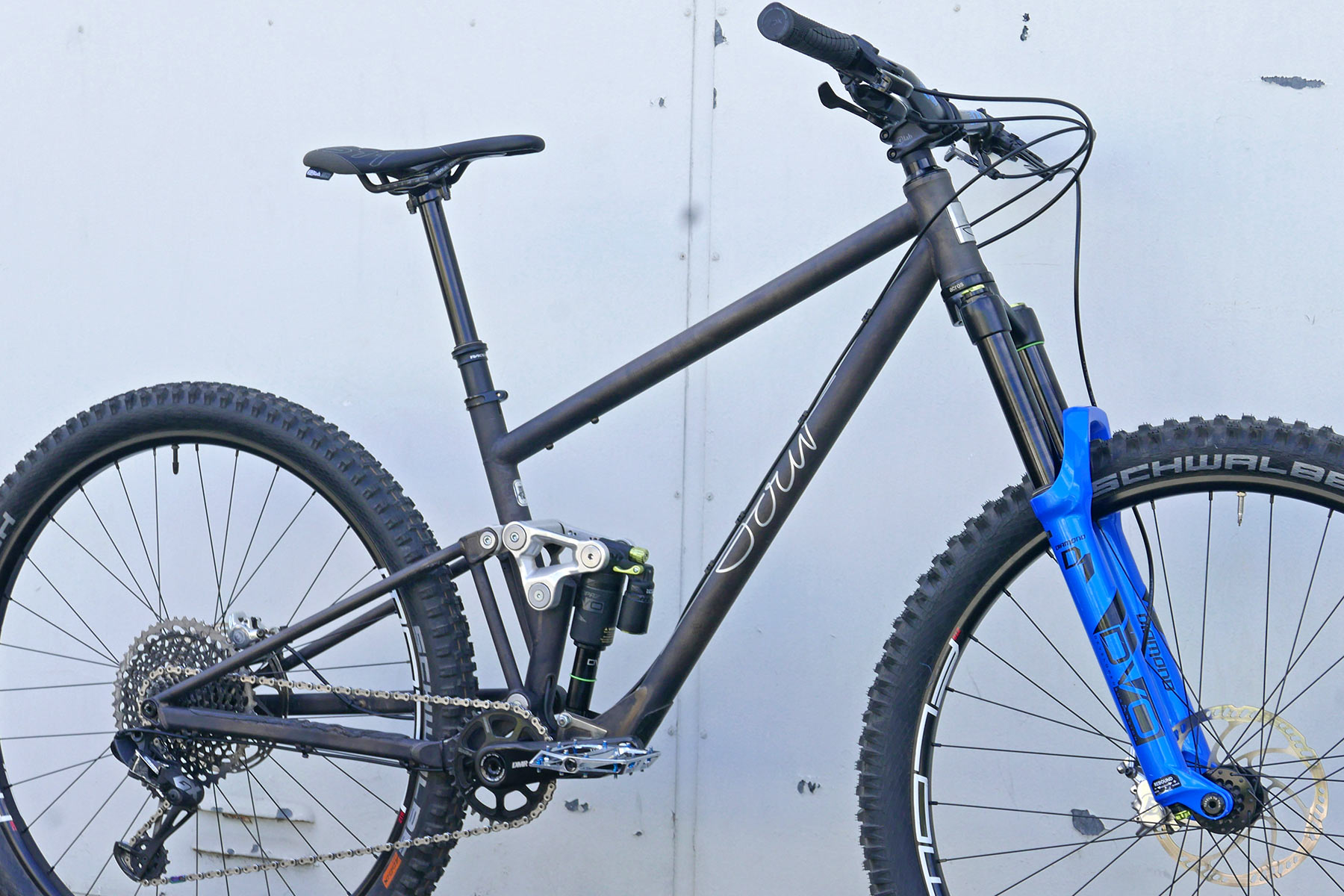 We’ve been catching glimpses of this steel full-suspension Sour mountain bike since the end of 2020. Its overall form appears to not have changed much since those first trail-ready prototypes… but the level of riding it’s been put through has definitely continued to evolve.

That’s because this particular bike has been in the hands of German freerider Timo Pritzel since the start of development. And gone from trail riding on it and hyping people to ride bikes & do yoga… to now alternately treating it like a slopestyle or bike park bike.

Tech details… What do we know? 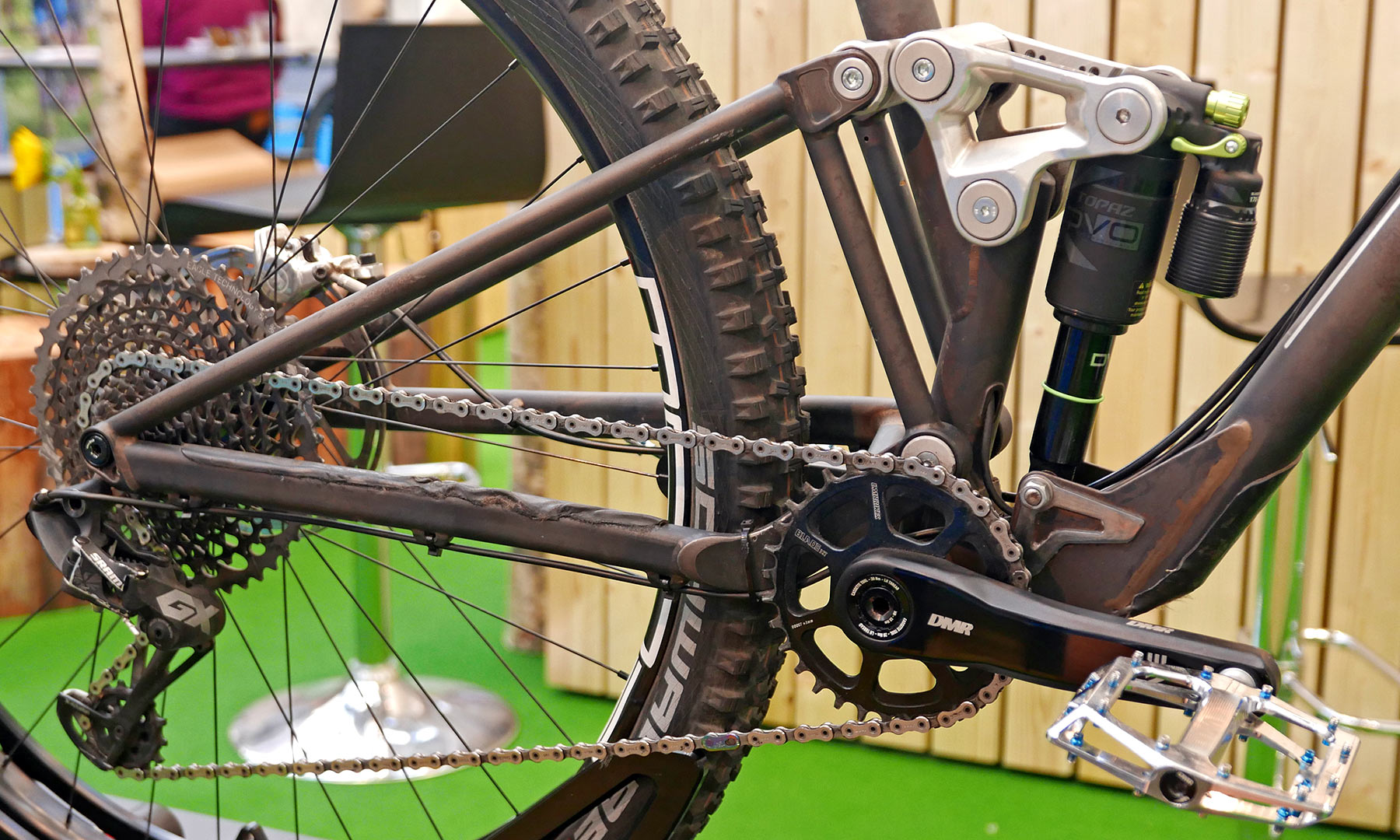 The made-in-Germany steel Double Choc prototype features a single pivot suspension layout with a shock driven by a separate linkage and a rocker arm. Those two shiny silver elements are the only bits not made of steel, instead CNC’d just across town from Sour in Dresden by Actofive. 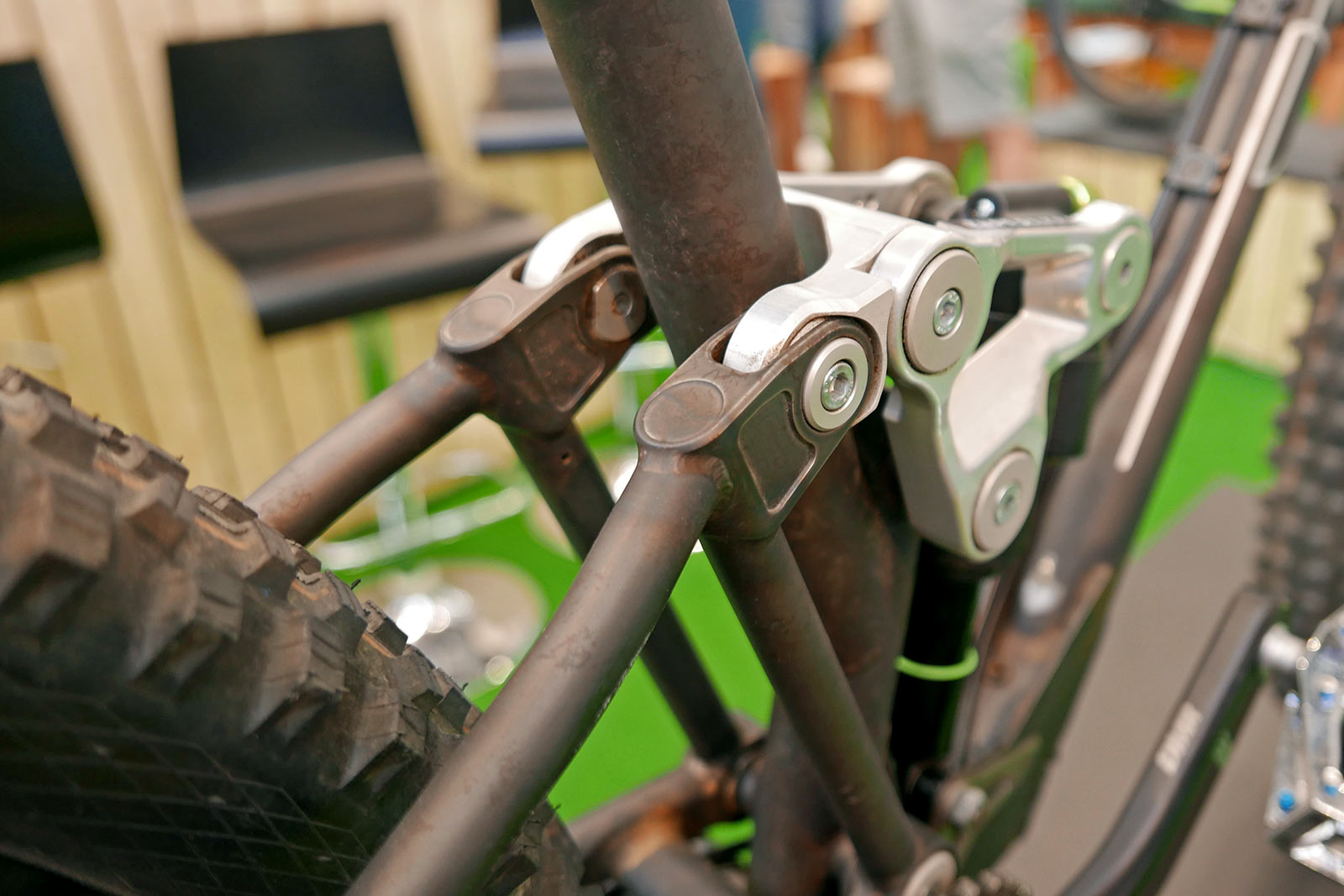 The bike pivots exclusively on oversized bearings, and there’s a lot of them up top to keep this thing moving smoothly, giving the bike Sour prototype 143mm of rear wheel travel. 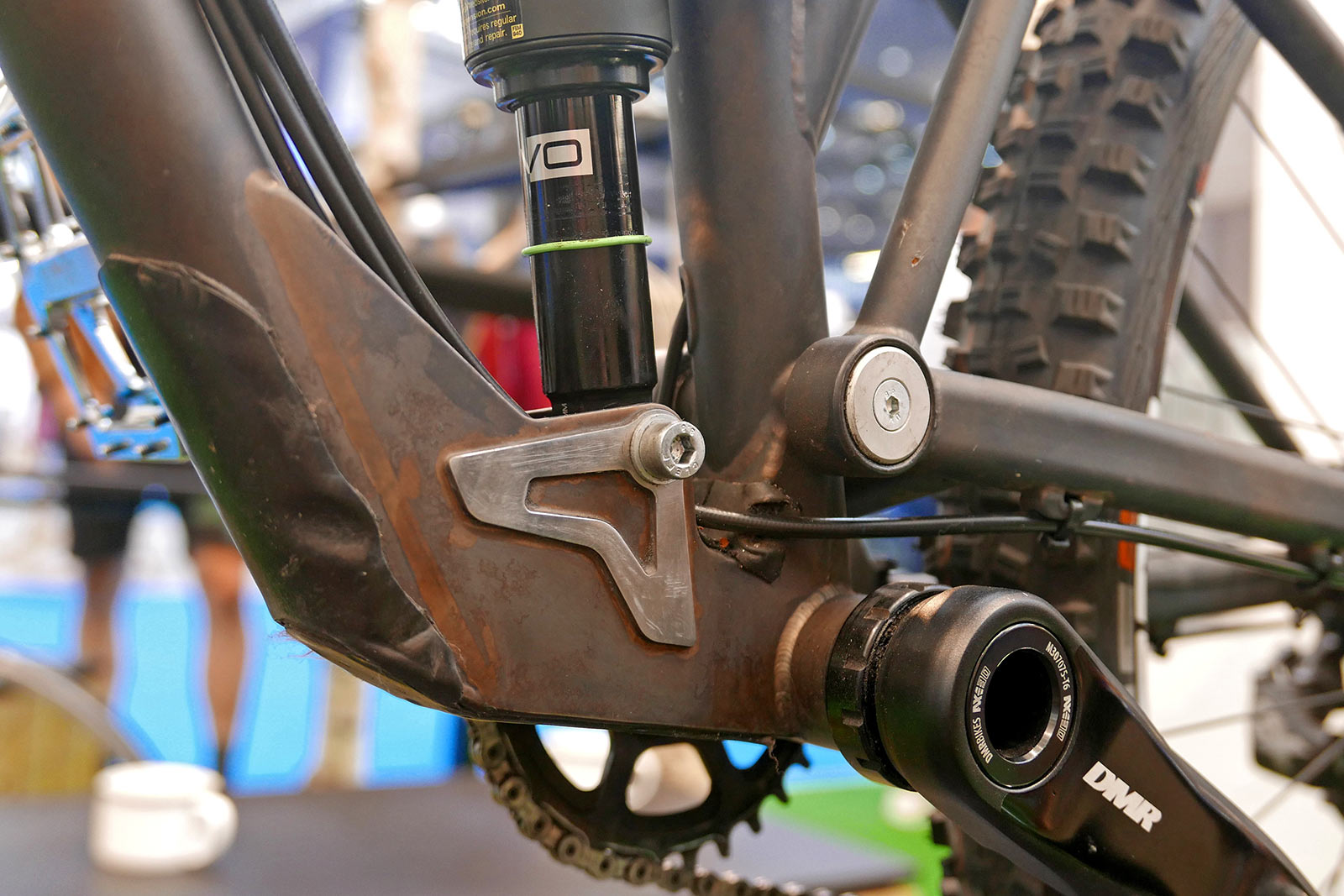 Down below, it’s a more simple setup, featuring a classic BSA threaded bottom bracket at the back of a boxy dropped section that ties together the lower shock mount with stainless steel reinforcing, a dropped downtube to make way for the low shock position (and piggyback shock clearance at full travel), and the no-frills single pivot at the base of the 2-part seattube. 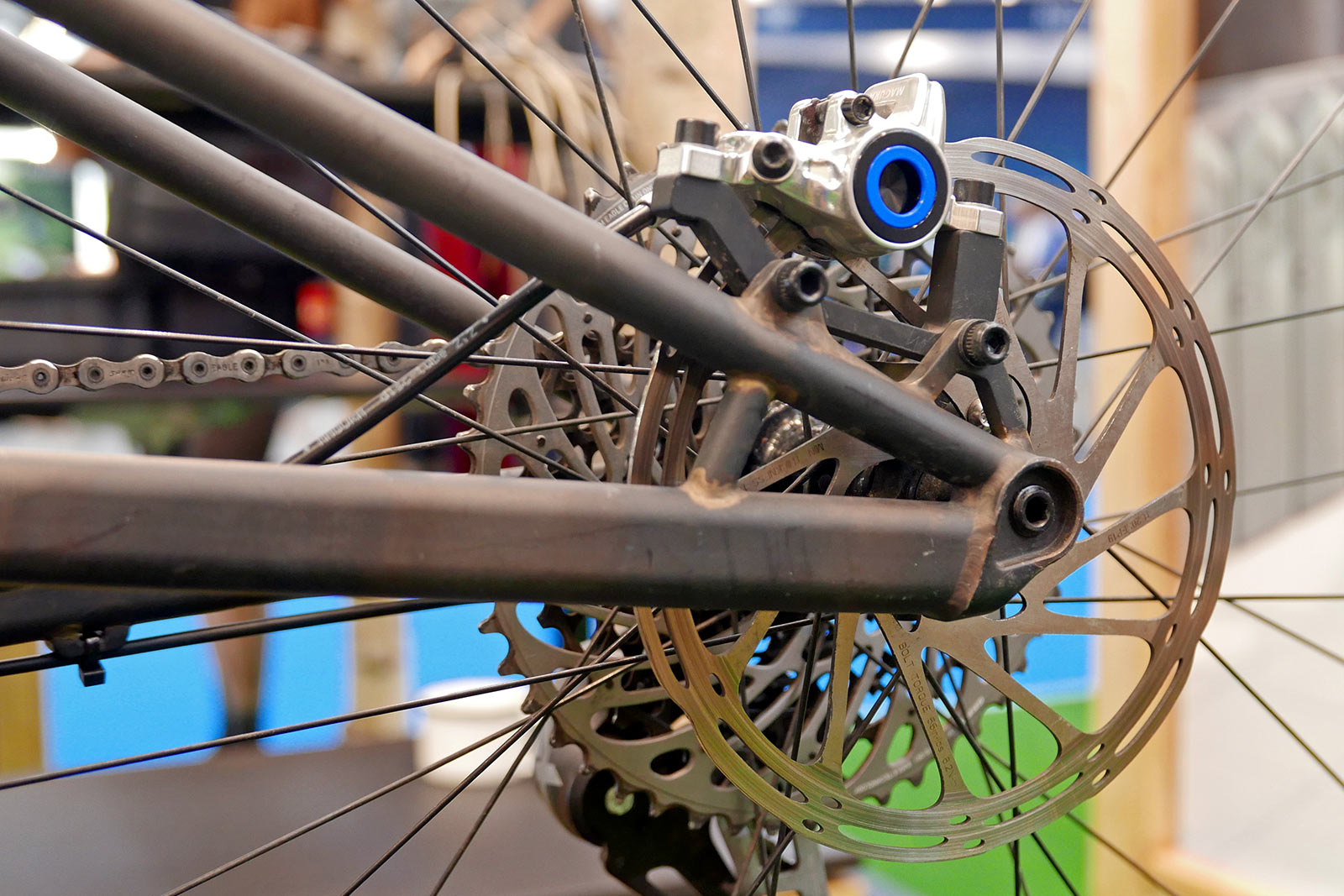 Out back, the welded oval chainstays and round seatstays come together with a nice machined Boost thru-axle dropout, an IS disc brake mount, and a tidy little brake strut brazed in between the stays.

There’s still plenty left unsaid from Sour, other than the fact that the bike is mostly dialed-in and pretty much refined… all in Sweet Steel 4130 CrMo… 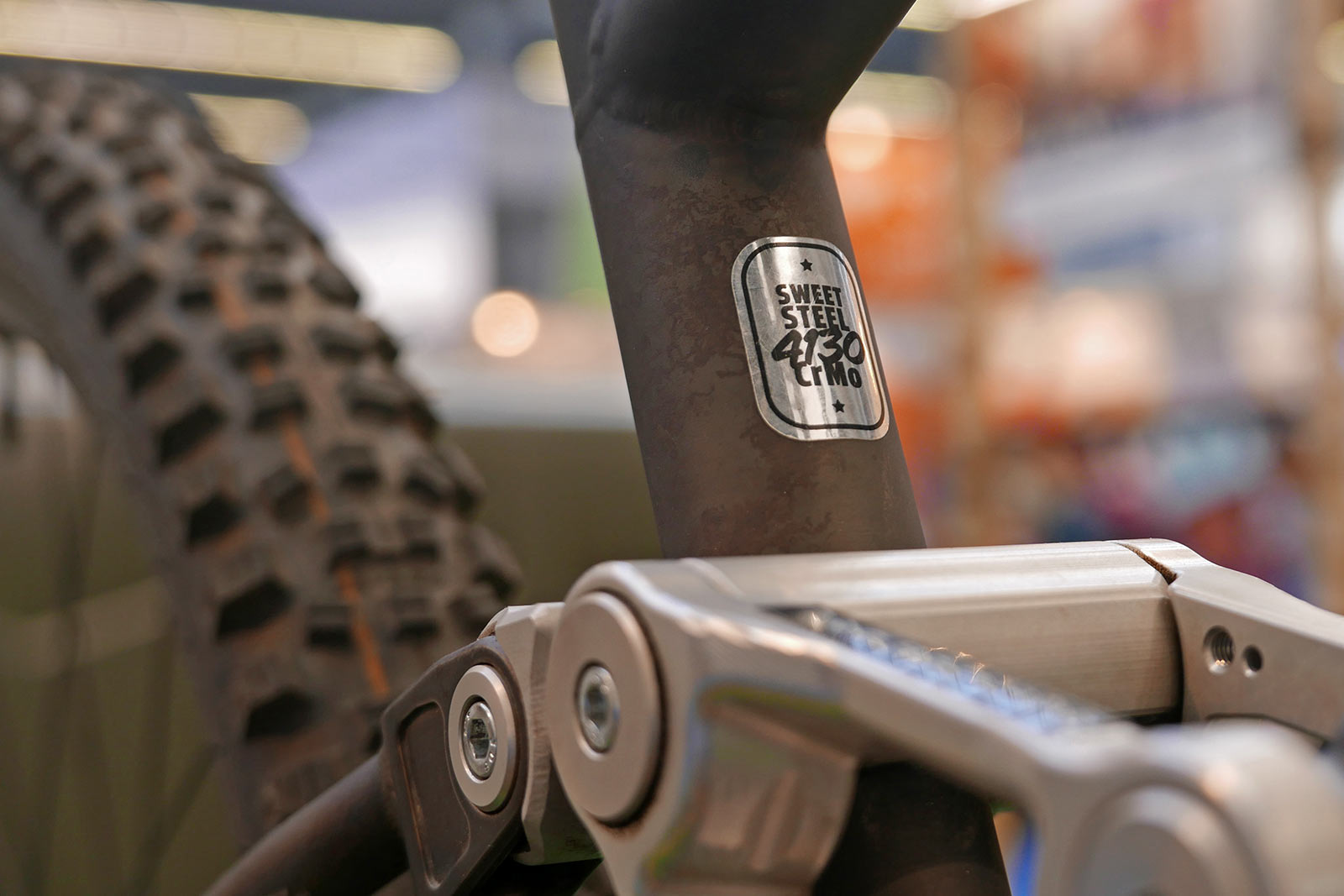 In fact, Sour had originally expected to release the new bike to consumers as early as last year. But instead, they decided to go all in on German frame production, shifting from frames made in Taiwan to frames welded and brazed in Saxony, just outside of the city of Dresden where they are based.

That Homegrown shift gives them more flexibility, while keeping prices affordable. But it has been a major move in the days of an ongoing pandemic (some of their custom small parts are still produced overseas for the moment). They are building production hardtail mountain bikes already in Germany now… 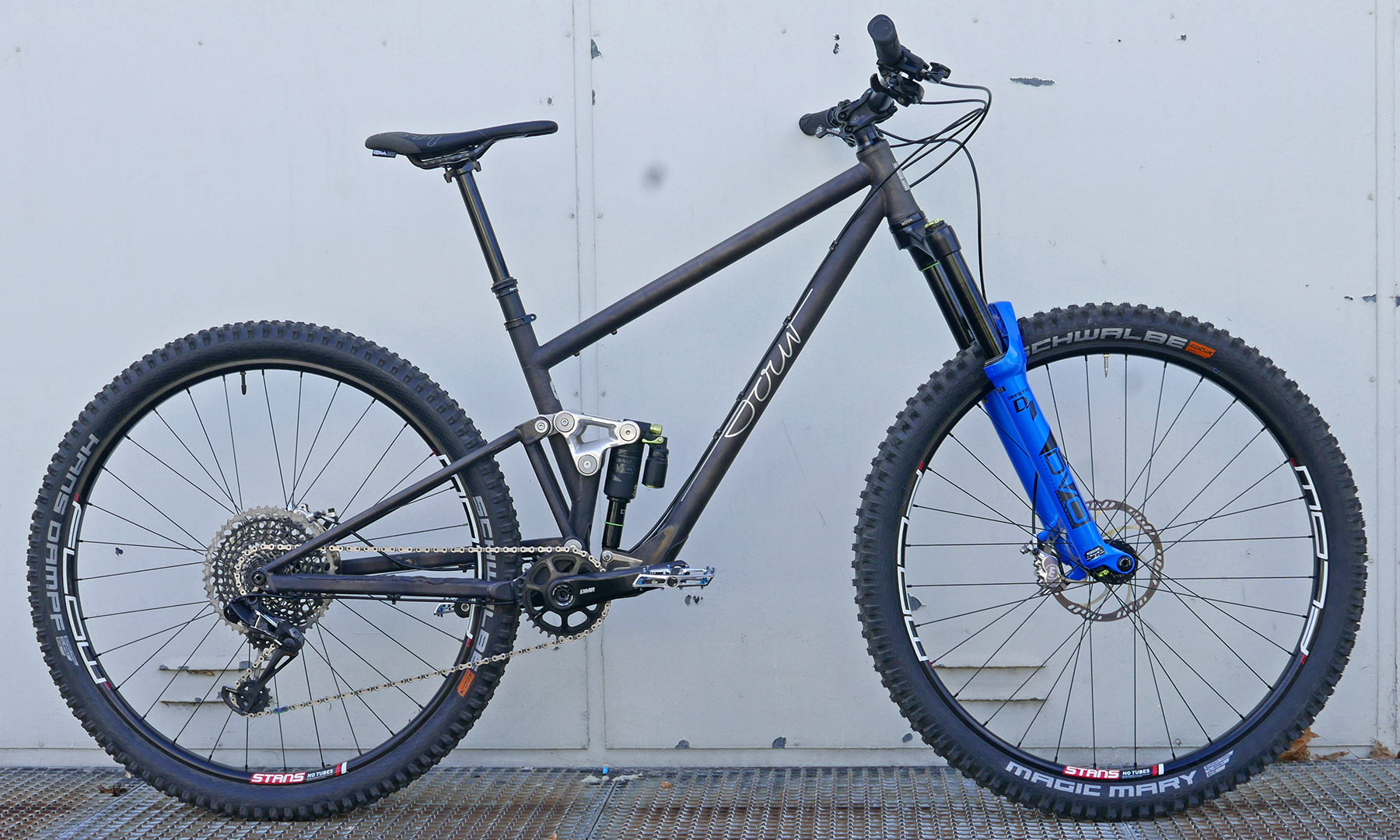 But the all-new Sour Double Choc full-suspension bike is a bit more complicated to produce, so they are prioritizing the more straightforward bikes at the moment. That said, this Sour prototype isn’t exactly on the back burner – it’s just getting a lot of extra product testing days in before you’ll be able to order your own Double Choc.

Besides the fact that this prototype I took photos of clearly still has trail grime in its nooks & crannies, Timo Pritzel has made clear that his bike is being properly trail tested.

This isn’t some ‘non-ridable sample’ prototype.

This is the prototype they are abusing to dial-in suspension kinematics and to make sure it will stand up to the most demanding riders. Apparently, after a couple decades of flipping bikes in the air from those benchmark early New World Disorder films and Crankworkx competitions to today… Timo was itching to get some new upside-down riding shots. 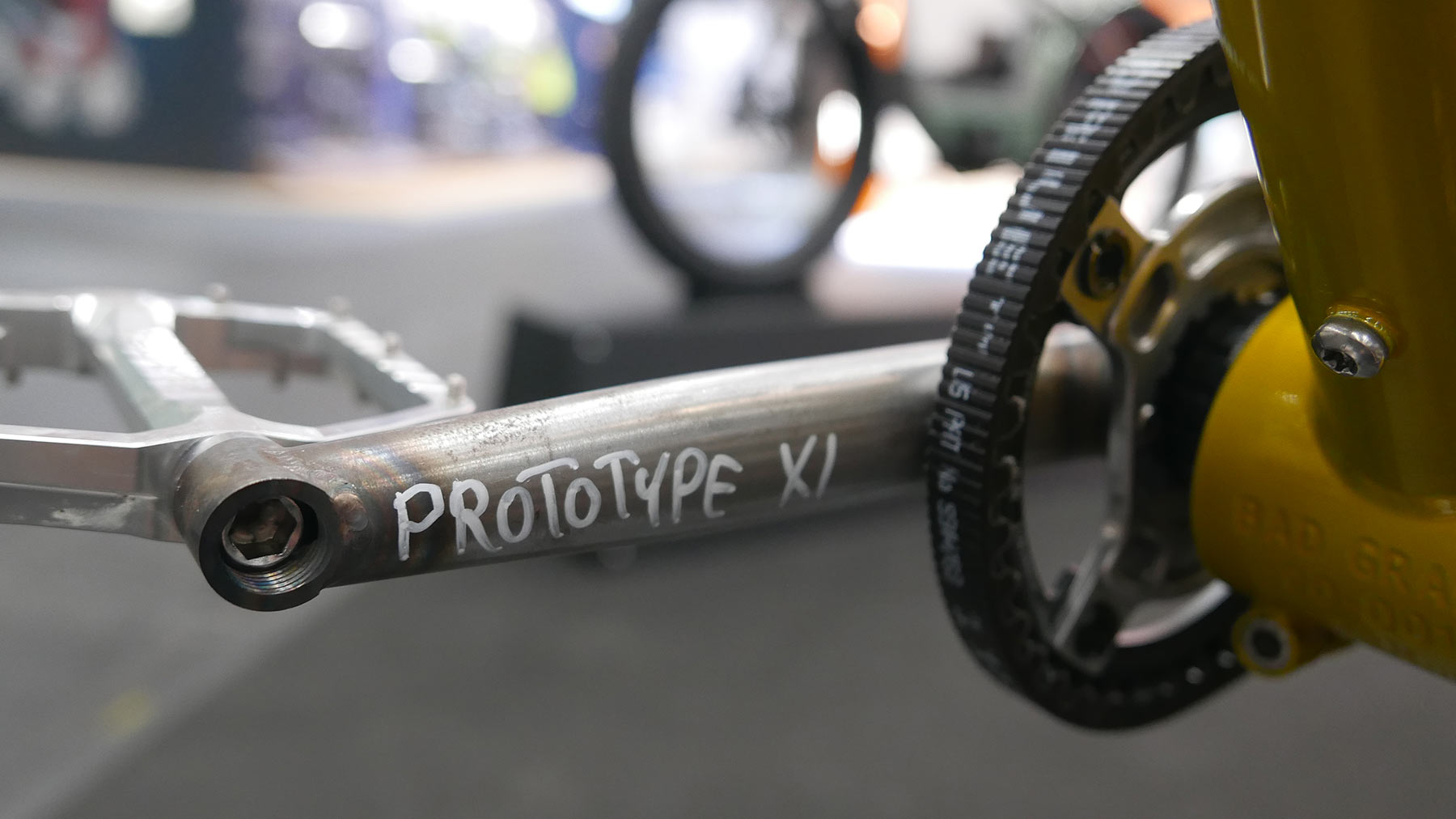 Now a bit back down closer to earth… Sour had another prototype hidden in plain sight at Eurobike. It appears to be prototype 11 in fact.

It’s been a while since I’ve seen a new tubular chromoly steel crankset on a mountain bike, so maybe Sour decided it was time to change that. 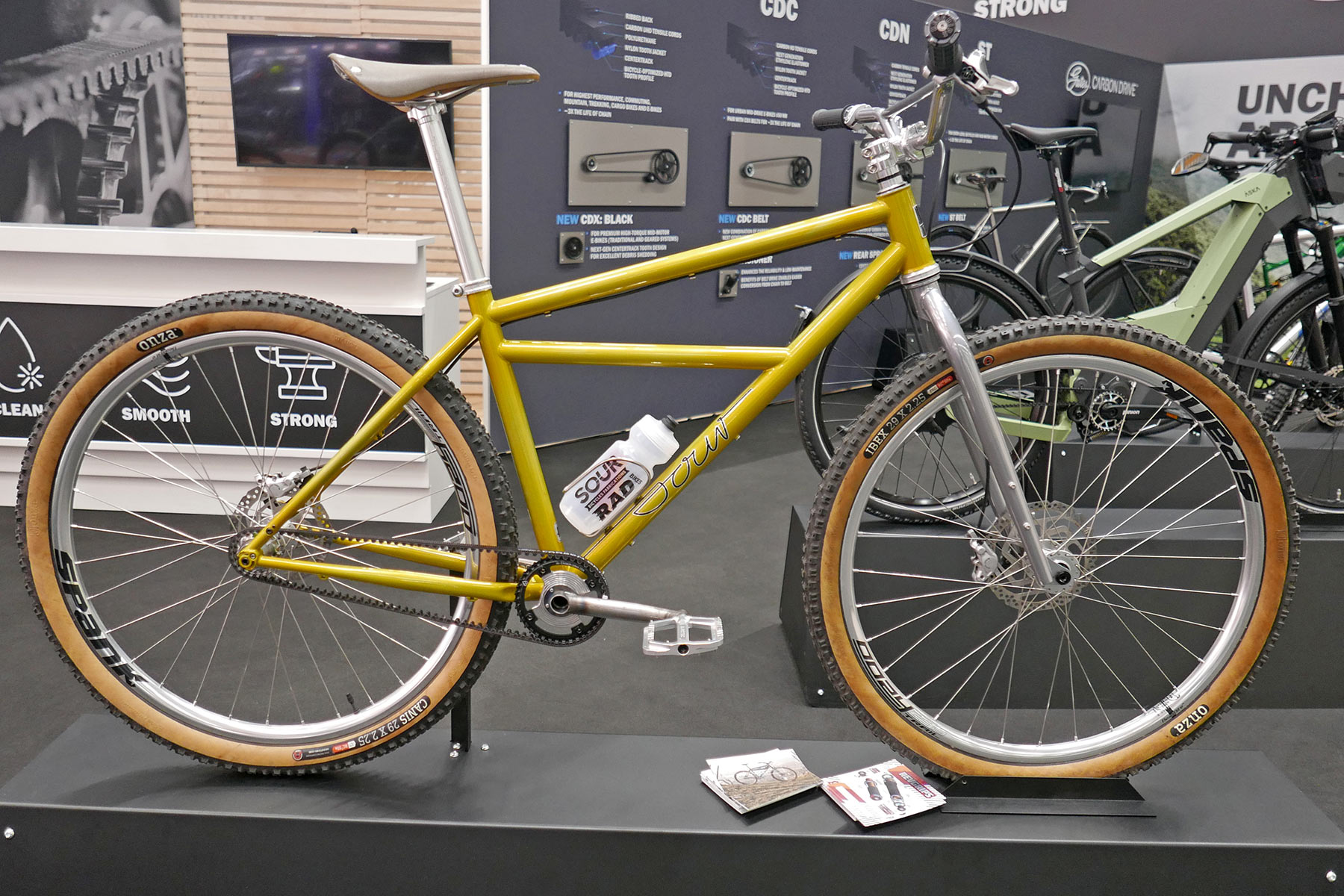 We already got a glimpse of these prototype Cybercranks on this rad Sour Bad Granny modern MTB klunker helping to celebrate 15 years of Gates Carbon belt drives.

But a closer look reveals some cool detail. 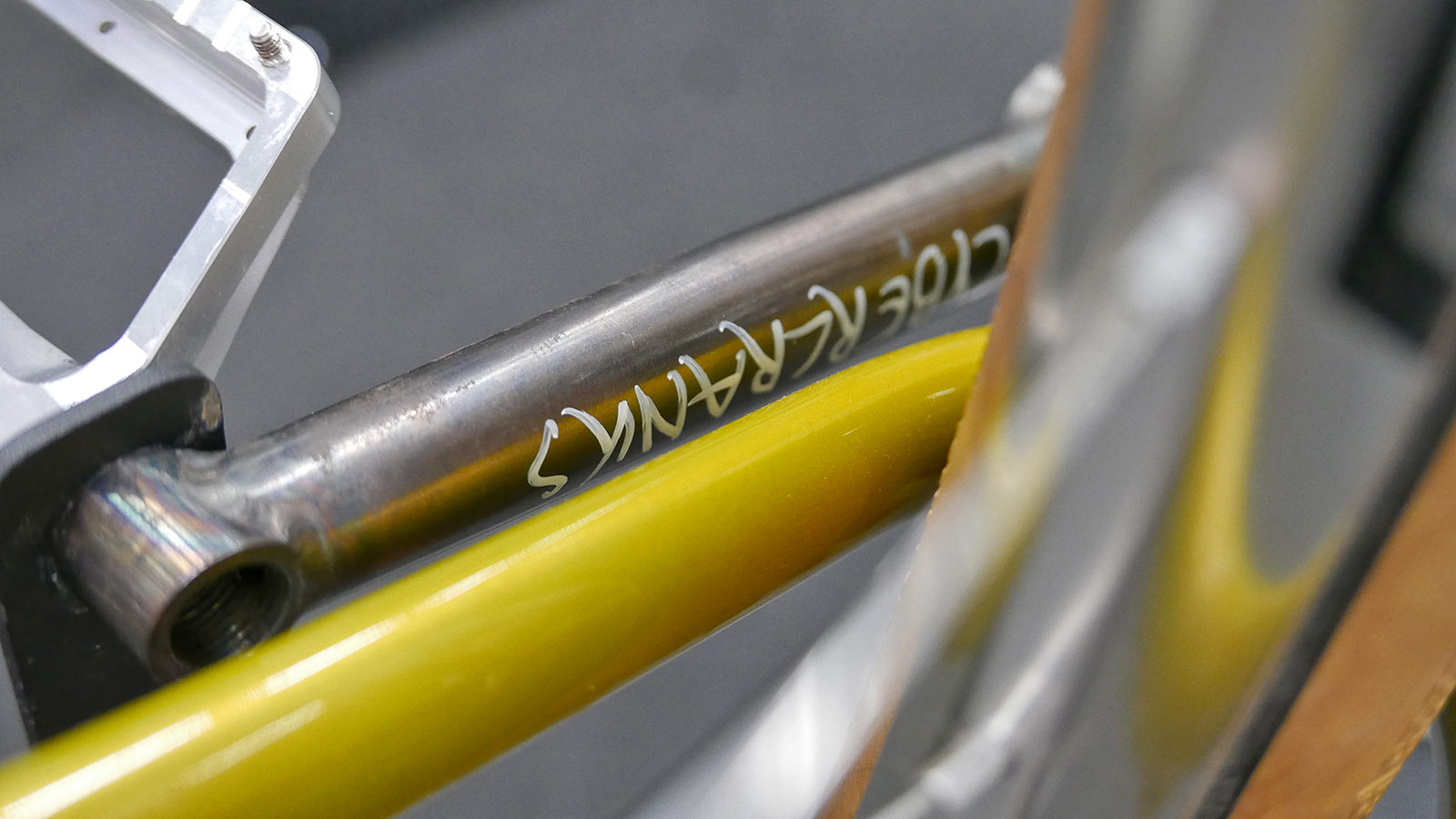 We’re going to have to assume the hand-scrawled-on name of the back of these Cybercranks doesn’t suggest that they are internet-connected or anything. Maybe it has more to do with the original Greek origins of control. These definitely will help with that. 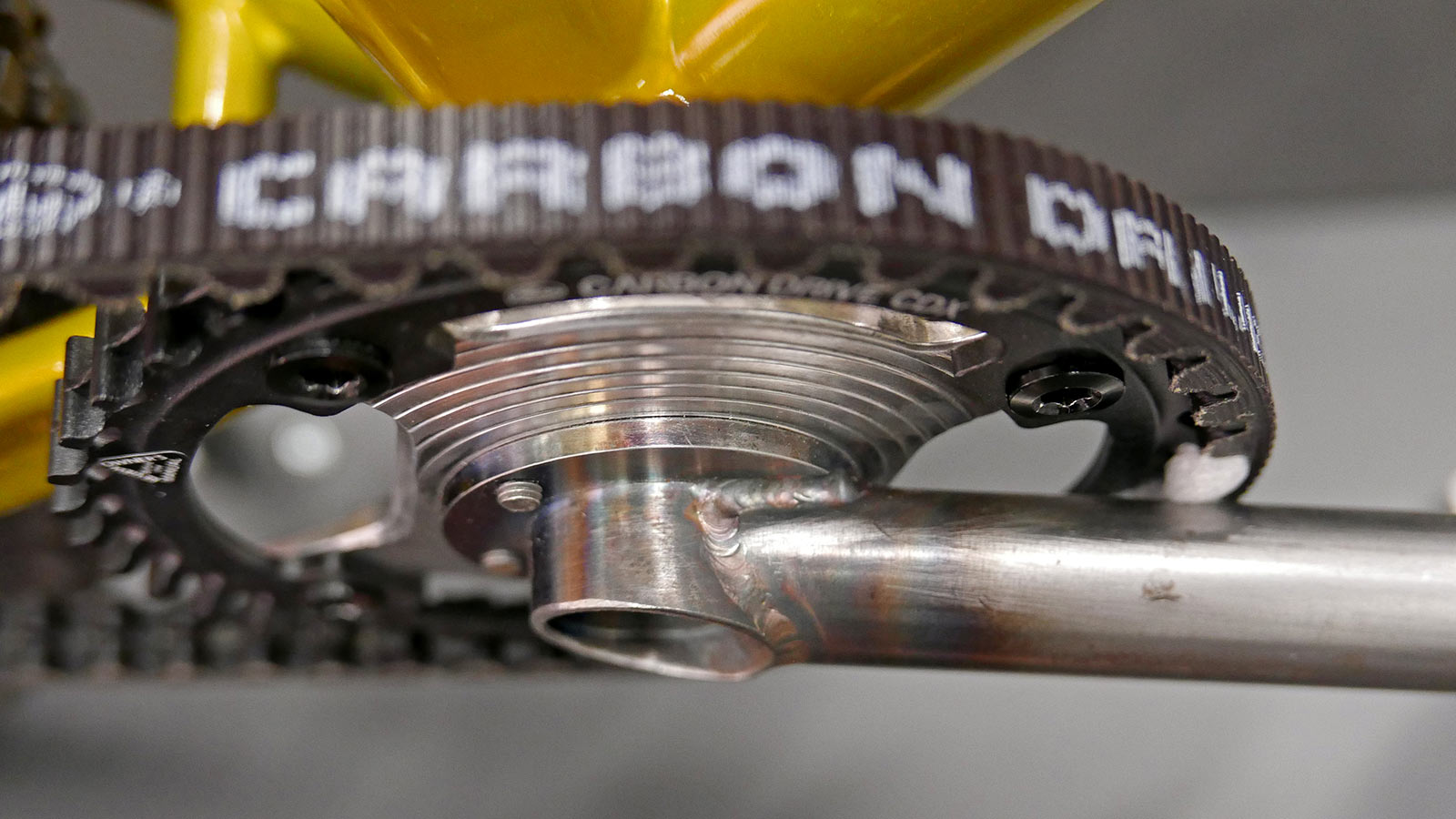 What’s really unique about these welded tubular steel cranks though, are their standard 3-bolt direct mount interface. Sure, this setup has another machined 4-bolt spider to mount the Gates belt ring. 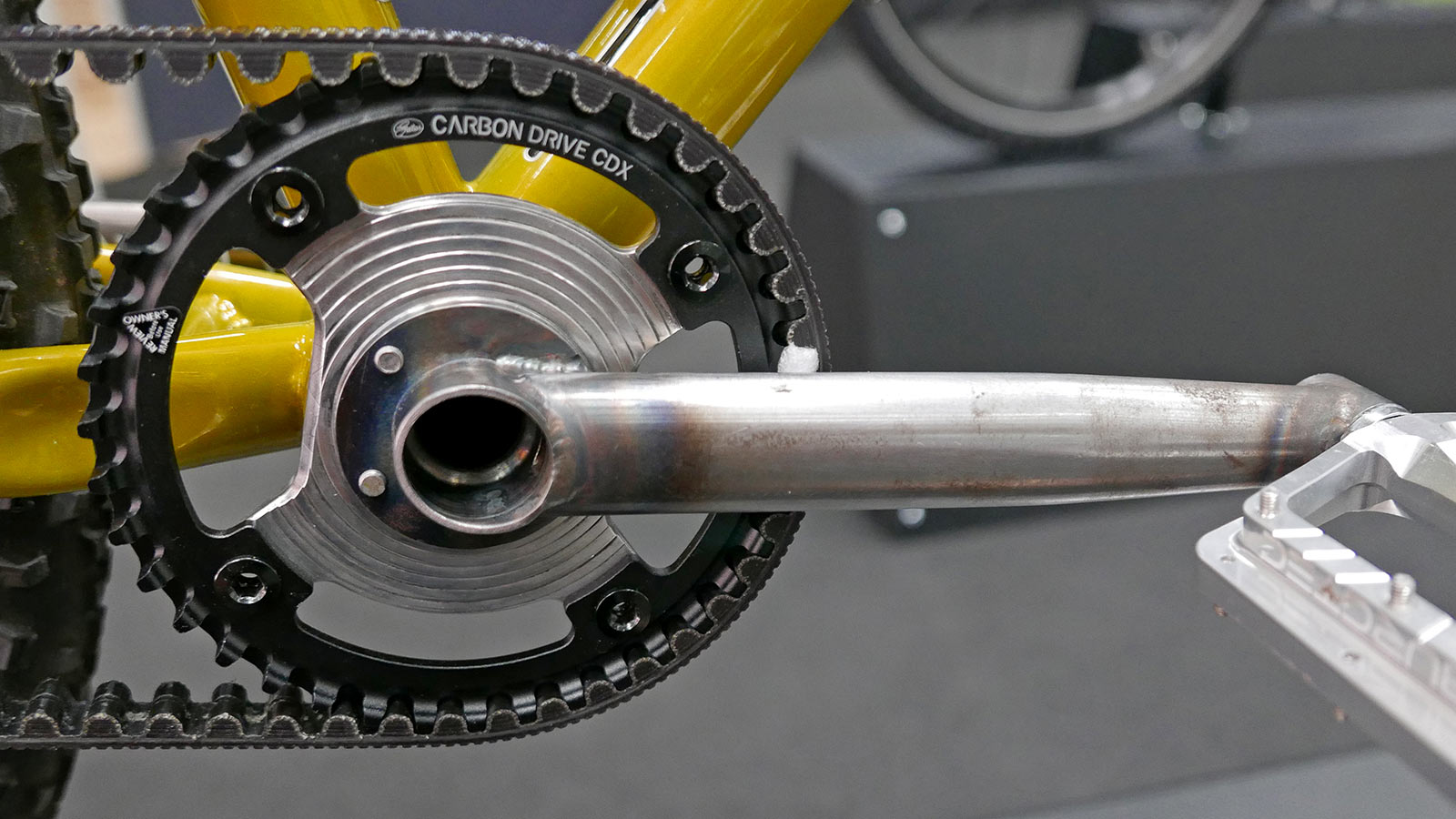 Now, there’s even less info available now on this Sour prototype tubular steel direct mount Cybercranks crankset. But if they can build a full-suspension steel enduro bike in their German workshop, surely they can weld together a few steel cranksets too, right?

We’ll keep on Sour to see how long until your gravel bike can get some modern steel cranks.

http://www.cybercycles.de/ for more information on the cranks