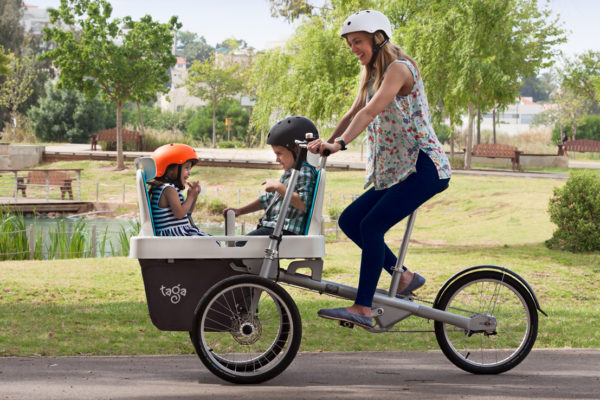 A lot of cyclists would probably like to have the hauling capacity of a cargo bike, and plenty of parents can get behind the idea of lugging kids around in a Dutch box bike. But when it comes down to it, the cost of entry is so high, and the bikes are so big and unwieldy that it is usually pretty hard to justify. Enter Taga, the company that developed a convertible stroller that could do double or even triple duty as a kid-hauling bike or cargo bike.

They’ve now developed a new iteration that simplifies things a bit, but still keep all of the good bike functionality. In the process the new Taga 2.0 drops in price by around a third, putting it in reach for a lot more cyclists. Taga took their new family bike to Kickstarter to get it off the ground, and has had a pretty unbelievable response. See how you can get in on the action too, plus full details on the bike after the break…

Taga thought they would use Kickstarter to gauge interest in the new Taga 2.0 bike, and in less than 24 hours they had already been backed for over $1 million, 10x their funding target. Since then, the Taga 2.0 has continued to draw in supporters. Needless to say, this project is going ahead. And since Taga already has experience developing and producing their similar convertible stroller/bike, it’s a pretty low-risk Kickstarter to get in on.

Taga wanted a new and more affordable option for parents looking for an easy-to-use and safe way to get around town with their kids, either shuttling them to school and activities or running errands. Their own convertible stroller Taga bike is a popular option, but at $1500/1600€ it was still priced out of reach of many people.

So the Taga 2.0 pares it down to just the bike functions and goes with a more conventional load box design to drop the price down under $1000. You still get family and cargo hauling flexibility, but at a more manageable price. 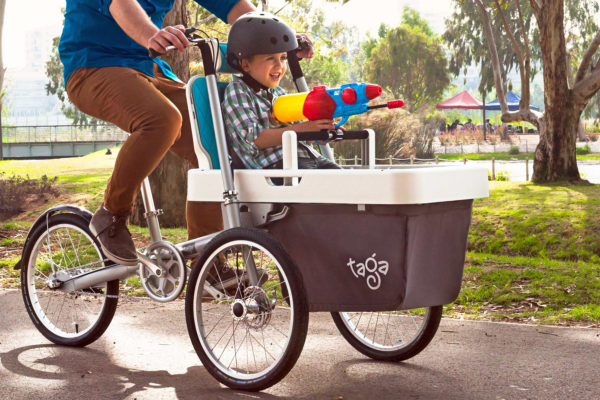 Now to the details. The new three-wheeled bike builds in adaptability out of its large steel-reinforced plastic and fabric cargo box, which can include two kids seats that can face forwards or backwards and can be covered with either a light sun shade or an all-weather full-coverage canopy for year-round riding. You can also mount a regular infant car seat to move the little ones safely. The Taga 2.0 also has an optional accessory bar for the cargo hold that lets you attach things to keep the kiddos entertained and actually includes the option for an integrated water gun! 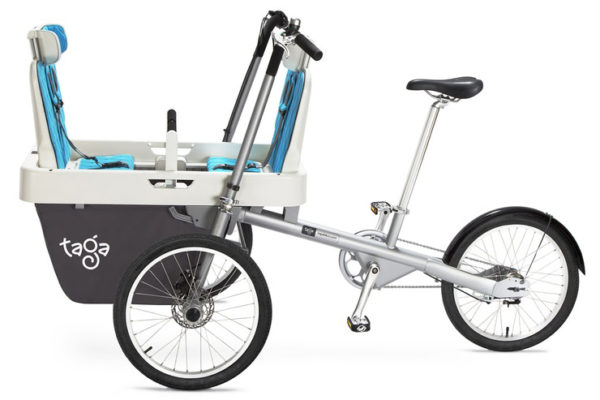 The bike itself is hi-ten steel with a chromoly fork, so don’t expect anything too light. It rolls on 20″ wheels and Kenda slicks, uses a 3 speed Shimano Nexus rear hub to move around and Promax mechanical disc brakes to come to a stop.

The bike has a claimed weight of 22kg/49lbs, and adds another 5kg/11lbs for the cargo box and 3kg/6.5lbs for the kid’s seat. Max rider weight is set at 110kg/240lbs; max kid seat weight of 35kg/77lbs; and max total cargo load of 70kg/154lbs. While not quite as foldable as their previous generation, the 2.0 is still collapsible (with the front and rear frame sections separating and the cargo hold folding down) and can fit into a car’s trunk, once you detach the box and manage its heft.

Plus, in an application that we can all agree electric-assist is made for, an electric motor add-on can turn the Taga into a family moving e-bike. The optional 250W motor claims a 32-45km/20-28mi range on a single 5.5hr charge. It is a standard EU-style speed limited pedal assist setup and adds just $550 at the crowdfunding stage (while it’ll add $800 at retail.) 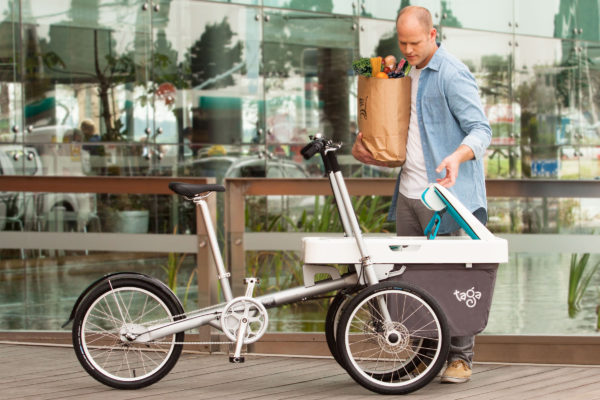 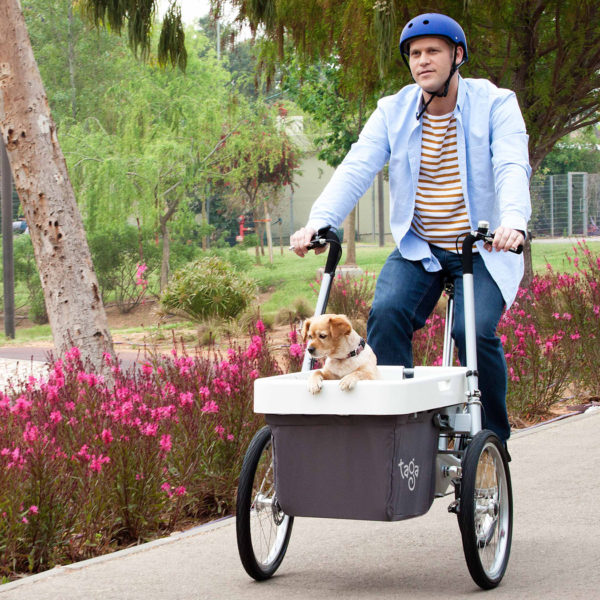 If you get in on the Kickstarter campaign, a new Taga 2.0 cargo bike will only set you back $650 for the base bike and box. It’ll go for a cool $1000 when it comes to market. Most family accessory setups will then probably total up to another hundred dollars or two, and don’t forget about shipping to get the base bike delivered wherever you are in the world. The Kickstarter runs through the end of July, so you still have some time to decide. Estimated delivery time is slated for October 2016.

Is this 3 wheeled contraption so unsafe that you need to wear a helmet to ride it?

Im all for Cargo buikes, I think they are great and well see more of them in the future. This cargo bike hoever looks heavy as hell, cheaply equipped with lowest grade components. And my that seatpostst looks like an accident to happen.

I want this to be good. Substantial savings over retail and delivery this year? Sounds amazing, but I’m so wary of Kickstarter.

Chubidubaba, Shimano Nexus, Promax Disc Brakes, Velo seat and the other components are in no way low-grade components and the seat post looks well made

Maybe I am crazy, but why would anyone get this as opposed to just running a trailer? Length? Trikes aren’t fun. And no bike that is consistently 60lbs is fun to go anywhere on. Add cargo weight, on a Nexus 3 speed? At least it has the 20″ wheel reduction going for it.

I’ll admit if you live very close to a town/market center it be worthwhile looking at and I assume this is their target market.

Thinking about it more, I kind of take back my original comment. If you use this for kids/market, it doesn’t seem bad if you live in a flatter area. I prefer 2 wheels, but there are benefits with 3.

I’m a backer and I think it looks promising. I live in Copenhagen where there are approx 15.000 cargo bikes so they are very common. The city is also very flat and have almost 400km of bike lanes!! I own both a trailer and a very expensive cargo bike (that cost more than 3 times the price of a Taga 2.0) and both have their advantages and disadvantages. Currently I actually prefer the cargo bike for getting around. It’s just so practical. I can bring the kids to kindergarten, pickup groceries and so on. Yes it’s heavier and I drive a bit slower, but in a city environment traffic light seems to be a much larger factor than beeing able to drive 5km/h faster. For reference I commute approx 20km each day on the cargo bike.

i think this is illegal to sell in usa, the passenger seat back is in rider compartment, violating CPSC

What a genius design. I love it and I don’t even own any kids. I would buy one for cargo usage if it wasn’t for our locals roads not being practical for trikes. Where I live many “cycle lanes” are a 600mm strip in the gutter so with a trike you essentially have to cycle a foot or more in the line of traffic to ensure the inside wheel tracks on the road and not the gutter edge full of glass and bumps.

my wife is looking over my shoulder and says get that! Looks really cool.
@Craig, if you don’t ‘own’ any kids I can rent you mine!

@BA, I don’t want my wife to see it otherwise she will want to get one to take our dog. Agreed, the design is so cool, they have done a brilliant job.

I put together a similar designed 3 wheel bike stroller. It wanted to flip cornering at any speed and would lift the rear wheel if brakes were used with any reasonable stopping power. Horrible design once you actually try to ride it. I don’t see enough changes in how this one looks from the one I put together.

seat is for a skinny person!

This company scammed hundreds of people out of their money by allowing us to purchase bikes they never intended to deliver. Now they are reselling our bikes on their website. DON’T SUPPORT THEM.