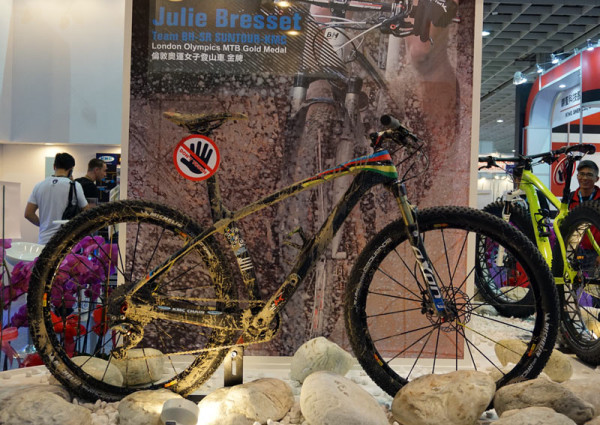 Nearby, Blue Competition Cycles had some small updates and a foreign market fat bike, and Bion-X was showing the next evolution of e-bike integration… 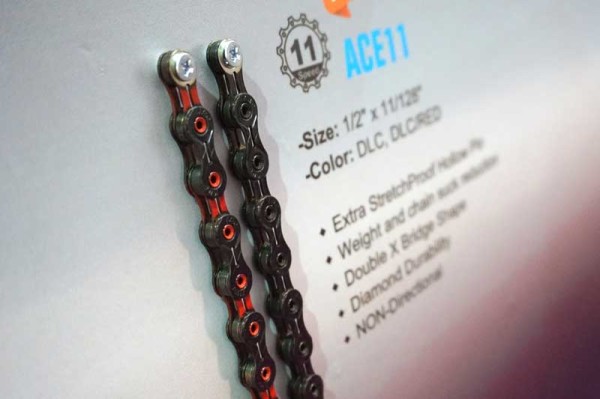 KMC’s Diamond Like Coating (DLC) has been improved, bringing chain life up to about 8,000km. They’re a premium chain, using “extra stretch proof” hollow pins and slotted inner and outer plates to save weight. Supposedly, the DLC coating adds no significant weight, helping KMC keep their chains among the lightest available. 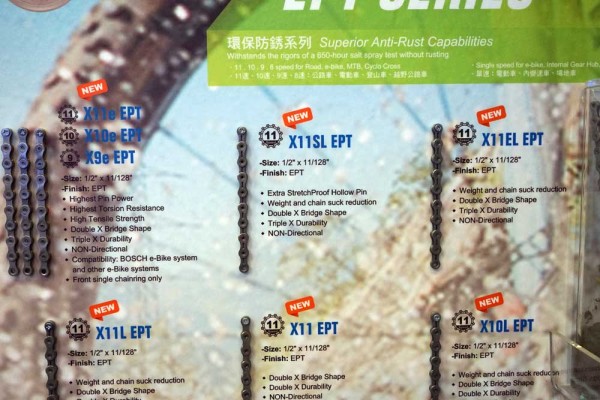 The EPT series, which is rated to 650 hours of salt spray without rusting, is now bumped up to a claimed at 5,000km of wear. 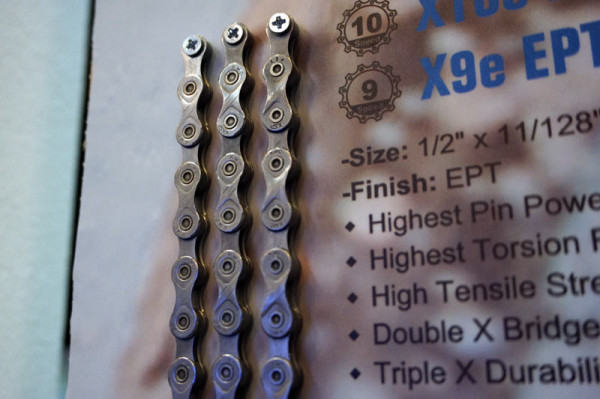 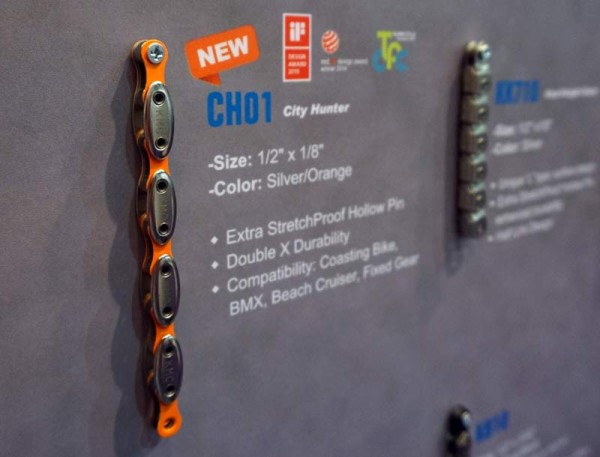 The City Hunter is a new chain that works for BMX, fixed gears and city bikes. 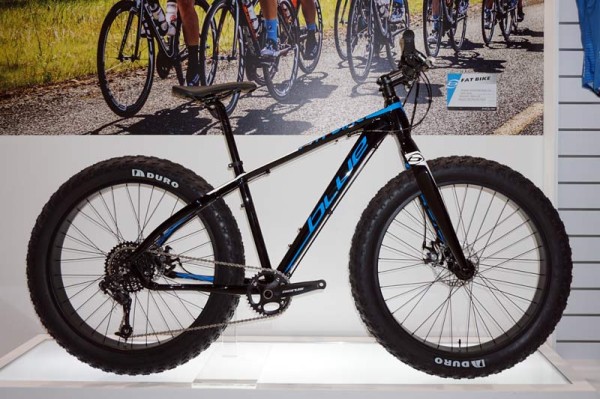 While most of Blue’s line carries over unchanged save for spec updates to keep with the times, they did have this new fat bike. It’s a fairly basic build, using Duro Tires on Shinning wheels with SRAM X5 and Tektro mechanical disc brakes. 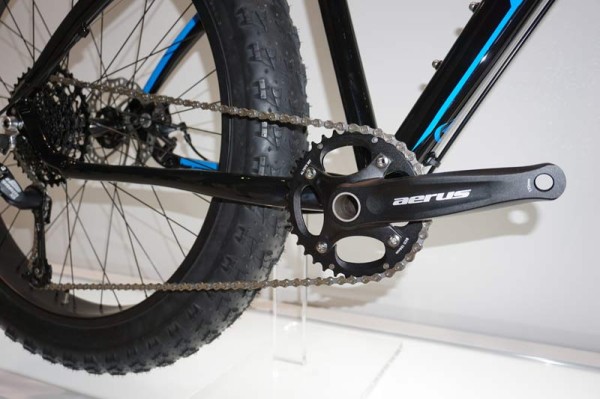 They’re adding reflective logos to the downtubes for a stealthy safety enhancement. My flash didn’t quite obtain the desired result, but it still popped a bit.

Under normal lighting conditions, it looks just like any other metallic logo. 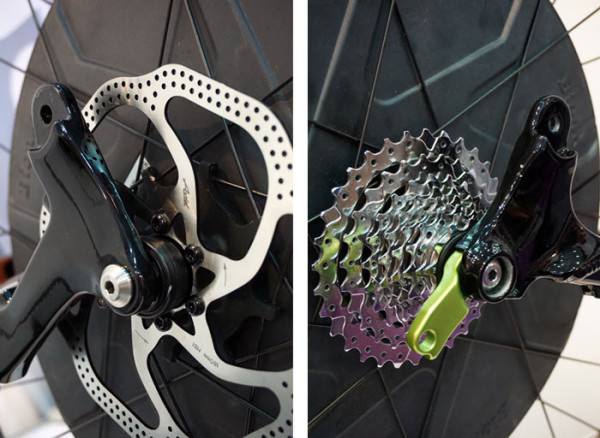 Whether your local trails will allow them or not, most major manufacturers, particularly in Europe, are working on motor-assist e-mountain bikes. Suppliers like Bion-X are making sure they’re kept up to date with a new thru axle option for their rear hub based motor. This gargantuan motor (the giant black disc behind the rotor/cassette) is very, very powerful and doesn’t lose anything to the drivetrain. 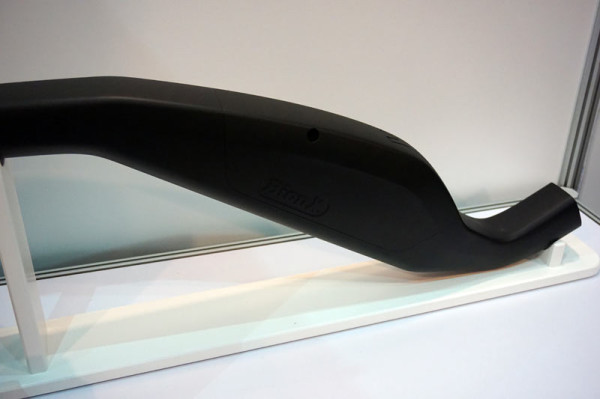 For commuter bikes, they’ve developed an integrated battery pack that can be slotted into a downtube. 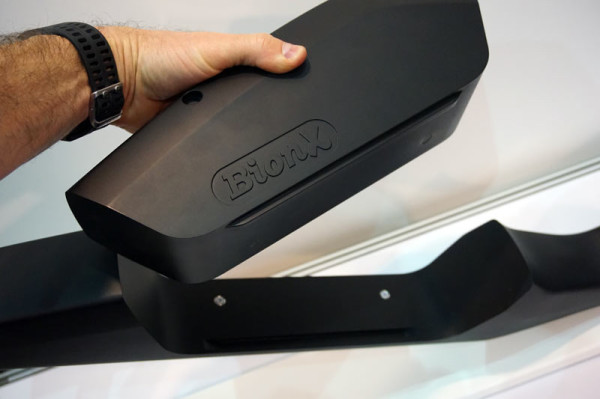 This one is pure plastic prototype forms, but the shape it representative of a finished product they’re working on with at least one major bike brand.

Not an engineer, but I feel like after six months, I would snap that City Hunter chain on a fixed gear bike. The metal by the rivets appears very narrow.

Shimano have an identical chain to those City ones. Garbage, noisy and not at all durable. Jolly pretty though!

KMC’s DLC coating looks nifty but I still prefer the blinging gold look of their Titanium coated chains. Plus who wouldn’t want a chain coated in the same stuff as high end milling cutters?

That is definitely not anyone’s race bike from 2012. XTR M9000 and Crossmax SL wheels were not even in designers subconscious at that point. I’m gonna say that’s a race bike of hers and the “London Gold Medal” on the banner is just a validation of the durability of KMC chains.

I was at London 2012 womens XC and a remember very well there being zero mud! Hmmmm…