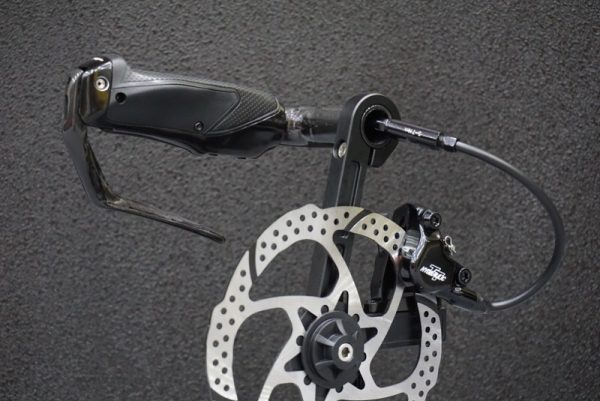 With a new wave of triathlon superbikes coming from the likes of Parlee, Cervelo aand Diamondback, it’s no surprise to see a better solution coming to market to ring them back down from speed. While TRP has already been supplying many such bikes with a stop gap solution like their HyRD mech-to-hydro or purely mechanical Spyre calipers added to some other brake lever.

Now, the new TRP TT Hydro (HDT-910) introduces a new, and much improved, way to put hydraulic disc brakes on a TT/triathlon bike. The master cylinder is housed inside the handle, tucking it partially inside the handlebar, with 5cm of bar overlap. It’s ultra clean, with internal routing and is the first fully hydraulic disc brake system for TT bikes. 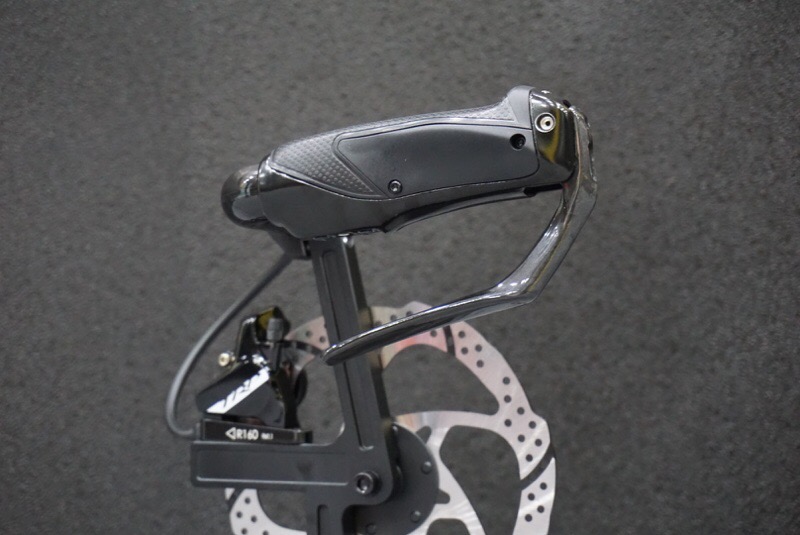 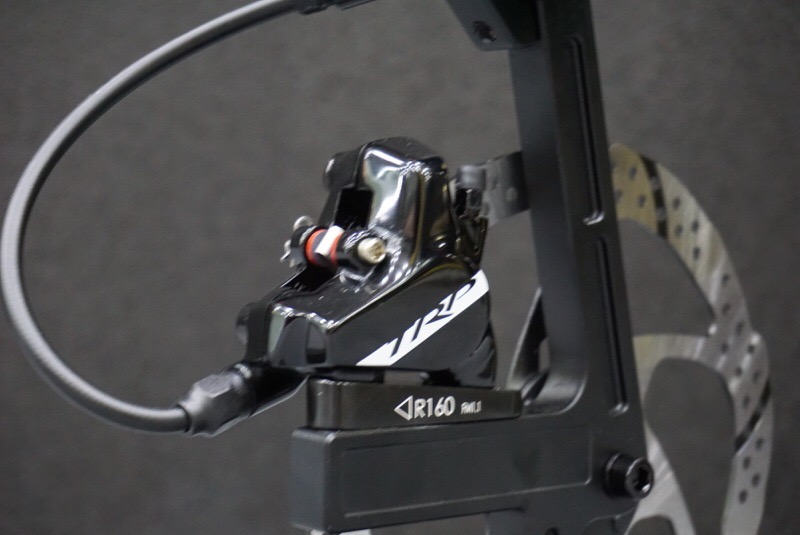 The sides have removable grip panels, which will allow for future integration with Shimano Di2 and SRAM Blip buttons. It uses the same flat mount calipers as the Hylex RS, which both share a different pad than their HyRD/Spyre pads…this one matches the new Shimano road flat mount pad size, making it easier to find replacements. 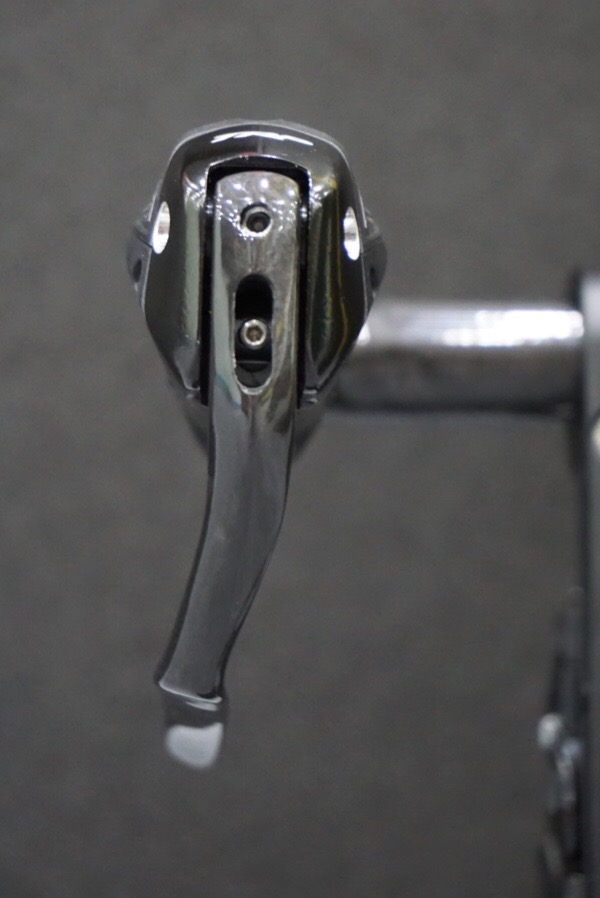 It comes with an 1800mm hose, and then you order it with a right lever or left lever, the calipers are the same (just use different mounts if you’re running it front or rear with whatever rotor size you’re planning on). This lets it easily work for foreign markets (ahem, UK) where folks like running their levers moto style. Available May 1. Price will be $134.99 per wheel, weight is 390g (no rotor). 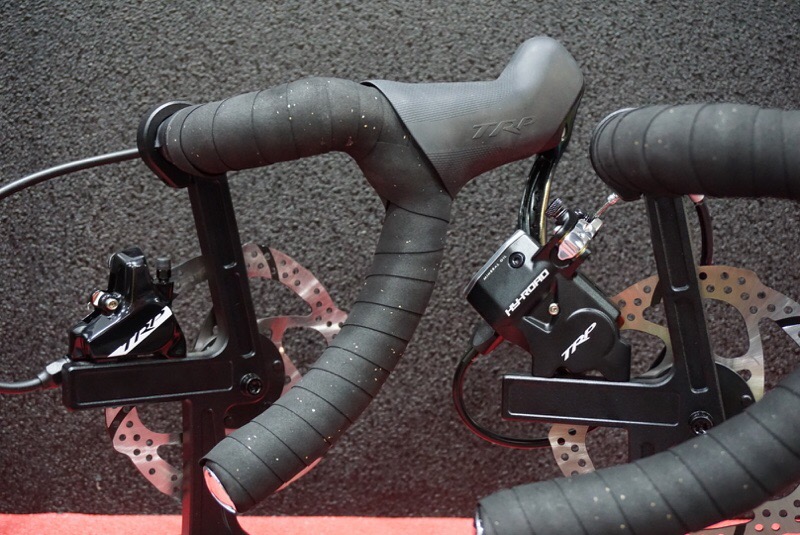 If you are in need of a disc brake caliper to work with existing mechanical levers, both the HyRD and Spyre now come in flat mount options, and for single-speeders, the complete Hylex group gets flat mount, too. 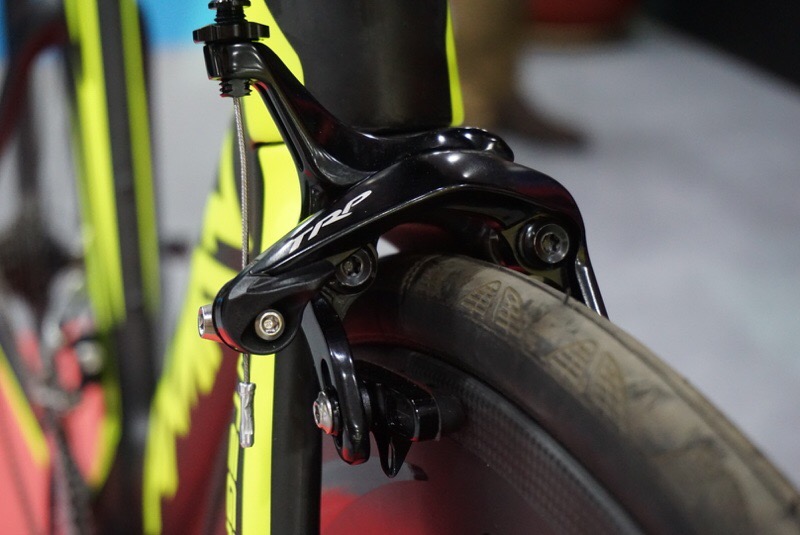 For mechanical and rim brake bikes, the new T980 direct mount calipers provide an option for bikes that aren’t getting a full Shimano group…SRAM doesn’t offer direct mount rim brake calipers. It’ll fit around a 28mm tire, comes in at 159g and uses a new quick release lever that flips into the lines of the arm’s arch to be more aerodynamic. Also available as a standard single-bolt mount called R980. Retail is $99.99. 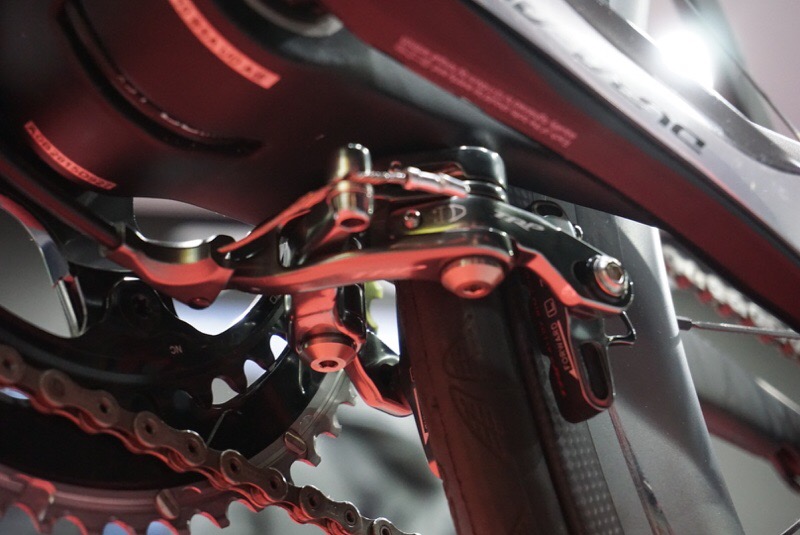 Not new, but cool, is the T851 for bottom-mounted direct mount rear brakes. It has independently adjustable arms, is easily centered and has a double-sided arm that makes it much stiffer for better braking. The real selling point is that it’s super slim, letting you run a crank arm-mounted power meter (Stages, Pioneer, etc.) on your bike without it clipping the caliper.

Finally! If anywhere, this is where the UCI should implement disc brakes. Most TT brakes are complete shite!

Finally, there are appropriate brakes for the new Cannondale Super Slice Disc….whose brakes totally are not going to injure anyone, just ignore the name.

It’s not the first Fully hydraulic brake for TT bikes, Magura did it years ago

As dictated by fashion needs. I won’t be swapping my 18 spoke area front wheel for a disc wheel that has enough spokes to handle the torque loads.

I am looking to get a Parlee TTIR Disc in Q4 2017 or Q1 2018. I sure hope Parlee makes this available instead of the TRP Spyre Flat Mounnt Disc Brakes that are currently part of the SRAM etap build. Hydraulic disc brakes are the future.