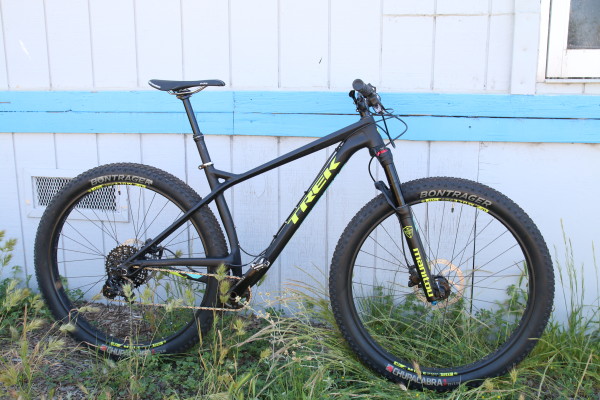 After all the buzz around wider boost hubs leading up to Sea Otter, we weren’t surprised to see a new bike from Trek to take advantage of the added tire clearance. What we weren’t expecting from Wisconsin was an entirely new range of plus/mid-fat/and fat bikes with (even) more new tire sizes.

It’s getting to the point that just calling a bike “fat” doesn’t really mean that much. What started as basically just a 3.7″ tire has morphed into an increasing number of sizes that now will include even a 27.5″ fat. The way trek sees it, tire sizes from 2.8-3.25″ fall into the plus/mid-fat category while 3.25-5″ tires qualify as fat. Then there is the wheel size itself. Originally limited to 26″ hoops, now riders have the choice between 26, 27.5, and 29″ wheels with varying rim widths.

Why so many? Well, as the fat bike continues to evolve, so does the manner in which they are ridden. While the Stache is what Trek thinks of as the “trail hardtail perfected,” the Farley gets broken down into different groups depending on the intended terrain. The stratification of the fat tires is intend to ultimately provide the most fun bike possible… 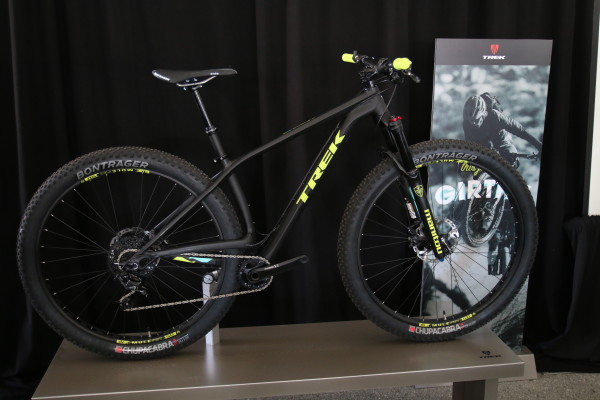 If you want the most distilled version of the why for Boost hub spacings, the answer seems to be increasing the stiffness of 29″ wheels. With the new 15×110 and 12×148 Trek was able to build 29″ wheels that are about as stiff as a 27.5″ and has wheels on the way that will increase stiffness by as much as 30% once they make the most out of the new flange geometry. Boost offers the ability to run wider tires while keeping chain stays super short and also allowing for the use of larger single ring chainrings.

The beginning of the new Stache came about when Trek started Project Weird in 2012. Implemented to find out what the absolute shortest chain stays could be for a 29er, the project started with a bike that had 398mm stays and clearance for a 29×2.5″ tire. After deciding to move to 29+ in 2013, Trek realized the bike needed a higher bb to accommodate for the sag of the bigger tires. The final stage of the project involved a geometry change and tubbiest tweaks and resulted in a bike that has impressively short 405-420mm chain stays with tire clearance for 29+ tires. Trek actually found that stays could be too short in this application as they make the bike too stiff and makes for a rough ride. The key for the new frame for the Stache was that it wasn’t just a stretched 29er frame to fit bigger tires. Instead it is purpose built to be a bike that rides, carves, and manuals like a trail bike, just with huge tires. 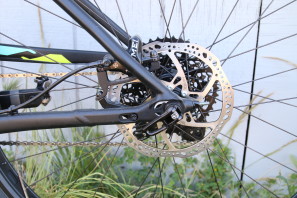 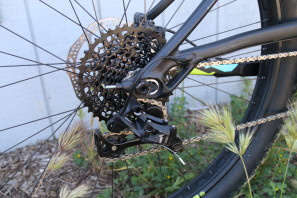 That range of chain stays comes from their new Strangle Hold dropouts that offers an adjustable length that won’t slip. The adjustment allows for the frame to work with 29, 29+, and 27.5+ wheels and tires and also provides the ability to run single speed. 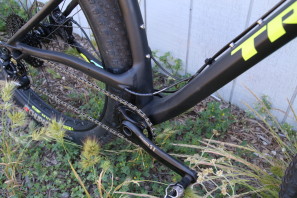 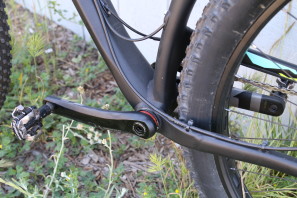 Furthering the ability to run such short chain stays is the new elevated mid stay which stiffened up the rear end and a one piece forged bottom bracket chain stay yoke. Without the stay in the way you can run up to a 38t chainring, and the elevated stay should make belt drive conversions possible. 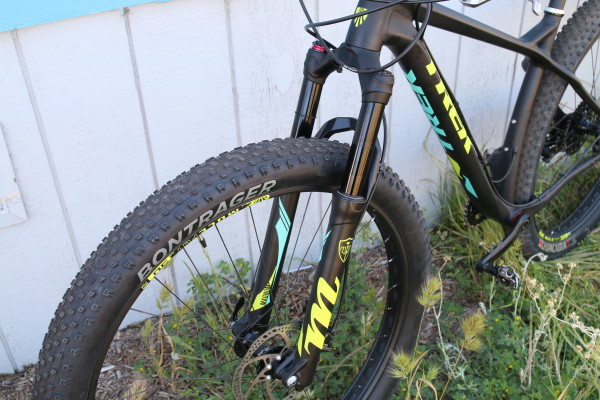 Of course none of this would be possible without a suspension fork which comes in the form of Manitou’s new Magnum Comp and Pro. We’ll get into the details of the fork in another post, but the Cliff’s Notes version is that it is the first purpose built fork for plus size tires. Available in both 27.5 and 29″ the Magnum uses Boost 15×110 front spacing to allow for a front wheel that matches the stiffness of the rear. 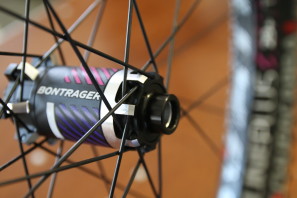 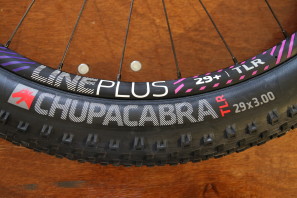 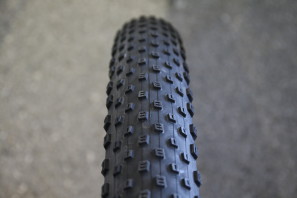 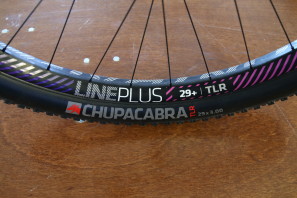 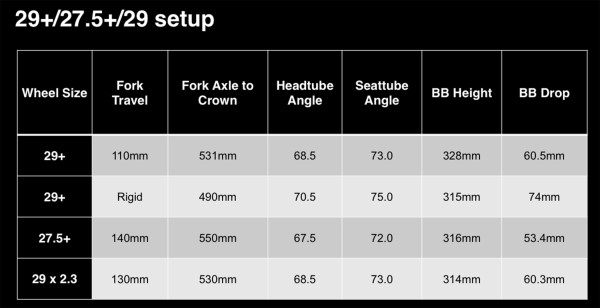 Currently, the Stache is offered complete only with 29×3″ tires. The frame will accommodate 27.5+ but at this time Trek sees  29+ as the better option since it offers the best roll over, angle of attack, and contact patch. Based on the chart above you can get an idea of what the different wheel/tire sizes will do to the geometry of the Stache but due to the variance in listed tire sizes the numbers may change slightly based on the tire used.

The Stache will make use of the new Bontrager Line Plus wheels which offer a 39mm internal and 44mm external width with a TLR and OSB rim bed and Boost compatible hubs with Bontrager’s Rapid drive freehub. Coming in at 2036g per pair, the wheels claim to be up to 30 percent stiffer than their Boost compatible competitors and will sell for $1000. 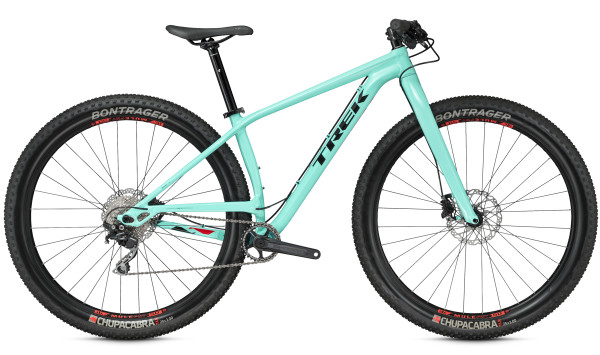 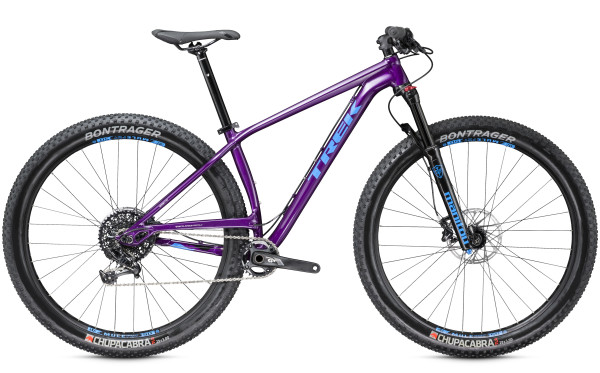 Along with the top end Stache 9 which offers SRAM X1, a KS dropper, and the Magnum Pro fork, the Stache will also be available in the 7 with a Magnum Comp and SRAM GX 1×11 drivetrain and the fully rigid Stache 5. The same Alpha Platinum aluminum frame will be sold without a fork for ground up builds of your own. 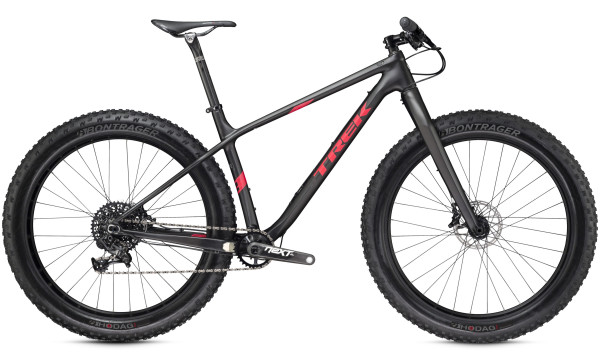 If 29+ isn’t fat enough, the all new Farley should have you covered. There is a lot new here – a new carbon frame, 197×12 rear end, carbon fat bike wheels, and 26×4.7 or 27.5×4″ tires and wheels. Yes, there is another tire and wheel size for fat bikes. The reasoning that Trek provided had to do with the fact that even with fat bikes the terrain and riding style varies greatly. Apparently 27.5 fat and 26×5 tires are very similar from a diameter standpoint, but they offer very different ride characteristics. The 26×5 are what Trek considers the size for exploration. Still ideal for loose or soft terrain, the bigger tires were made possible thanks to the wider rear end, but the pressfit 121 bottom bracket keeps the same q factor as the 177 bikes previously.

The 27.5×4″ tires on the other hand offer better rollover compared to 26×4, and less bounce compared to the 26×5. This is what Trek sees as the tire and wheel size for trail and groomed fat bike riding. Currently, Sun Ringle offers an 80mm fat bike rim in 27.5″ and other companies have some on the way. The same goes for tires with Bontrager, Kenda, and Maxis all committed to the size at this point in time. For their new size options Bontrager is introducing the Barbegazi 26×4.7″ tire and the Hodag will be available in 27×3.8 for the new tire size. The same Strangle Hold dropouts found on the Stache are used on the new Farleys which allow for changes in wheel base or single speed use. 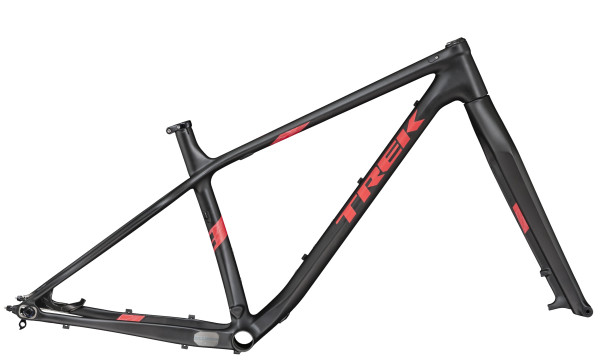 Available in completes or a frames, the new OCLV carbon frame lays claim to being one of the lightest on the market with a 1300g frame in 17.5″. The Farley 5 uses a new alloy fork that is 250 grams lighter than the previous fork and there is a new light weight 600-gram carbon fork with an alloy steerer on Farley 7 and 9.6 and a new carbon fork with a carbon steerer at 550 grams for the Farley 9.8. Complete bikes will be in the 23 lb range for the 9.8. 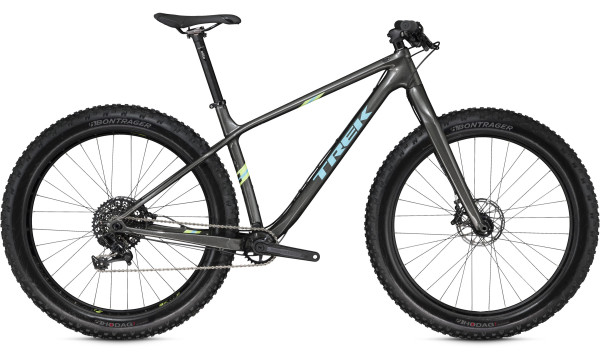 The Farley 9.6 will complete the carbon line for the completes, and the frames will be available as well. 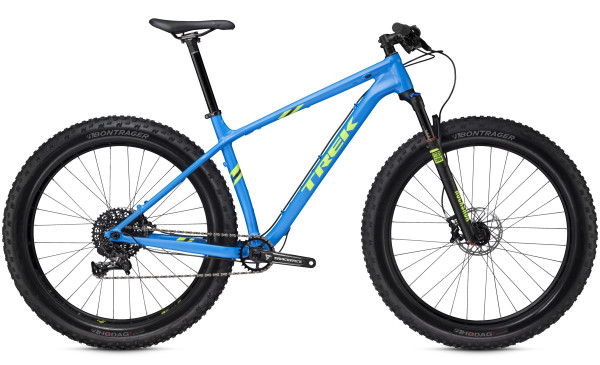 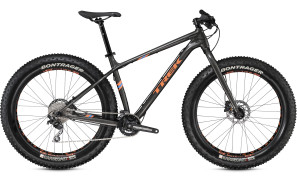 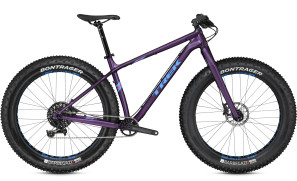 Along with all of the carbon Farleys, the 27×3.8″ tires continue through the Farley aluminum line with the Bluto equipped Farley 9. The Farley 5 and 7 will roll on the 26×4.7″ Barbegazis with rigid forks.

Hmm, that would make a pretty sweet single speed. You could even run a belt drive on that stache (if thats your fancy) Good work Trek

I don’t understand why BB drop varies across the wheel sizes.

@SB Each wheel size is intended to be used with a different fork, as the axle to crown length varies between these forks so does the position of the bb relative to the axle positions.

The Stache 9 is available as a frame-only in addition to completes.

In order for both bikes to same bb height measuring from floor.

SB – in addition to what WK says, fork a-c effects this decision as well, as a fork length adjusts geometry as well. This effect can be seen looking at the two 29+ options.
And Trek may not be shooting for the same BB height across, since a 29+ rigid will be used differently than a 27.5 with 140mm fork

Oh, pi fail indeed. WK got the BB drop question mostly right, but completely dropped the ball on pi. The weird thing is that WK’s explanation of bb drop doesn’t need pi at all. That’s what the baseball people call an unforced error.

The return of the elevated chainstay. I assume this design would be nice with a gates driven Rohloff. Wonder if they will offer that.

That elevated stay bike is the first Trek in a long time that actually inspires me to buy a Trek. Not that I’ve specifically disliked Trek, their bikes are great, but the Stache not only looks cool with the elevated stay but all the frame features are so cleanly executed.

I don’t see 20mm of vertical adjustment in those dropouts, and I don’t see any mention of an eccentric bb. So 20mm of bb DROP is not possible.

Dude, they’re using different length forks to adjust BB drop between wheel sizes. 29,29+, and 650b+ all have different axle to race measurements… It’s right there in the cart. ‘Numbers’ ಠ_ಠ

WK, BB drop is measured relative to axles, not the ground. Thanks for presuming stupidity, in any case.

Thanks others for clarifying that it’s meant to be used with different forks. I could always just read the article…but sometimes parsing the grammar just makes it not worth it.

I rode the new Stache and thought it was super fun with the short chainstays and big tires…the Manitou fork seamed like a piece of shit as predicted.

Is there any chain slap with an elevated stay?

I just don’t get it? 1990 Nishiki Alien anyone? OG Fat bikes 26x 4 were just slow and handled like a dump truck/. I will keep all my carbon Full suspensions and enjoy fast flowing trails.

Those seat tube angles that you quote on the Stache are larger than those that Trek show on their geometry data. For instance for the rigid fork and 29+ tire you show 75 deg whilst Trek give 70.8 deg. Guessing that as the seat tube is actually bent what they quote is the angle of the top portion and what you quote is from the bottom bracket, or the effective seat tube angle. Is that correct ?????