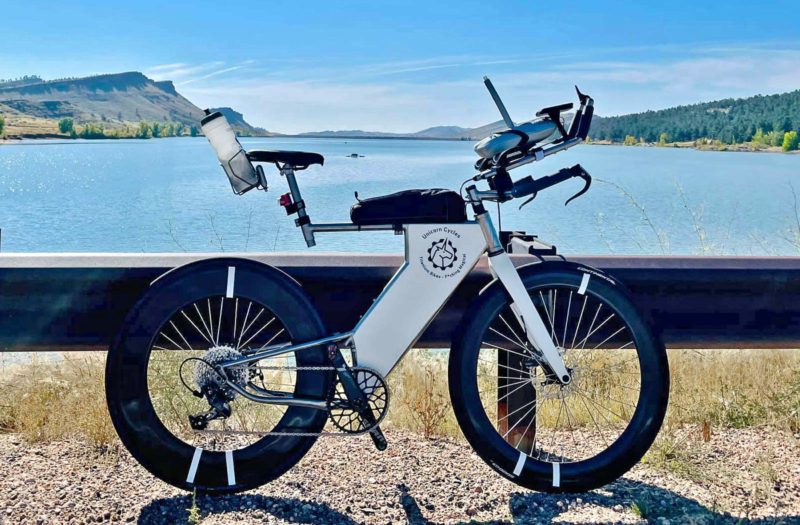 It’s safe to say this Unicorn Cycles titanium time trial bike prototype is about as rare as its namesake. So wild is it in fact, that I probably wouldn’t have believed it existed, had I not actually seen it. But it is real. And it’s actually the second race-proven ti TT prototype from the wild mind of Unicorn-founder & amateur racer Jason Turner.

Unicorn Cycles is a small US company that designs & sells affordable custom titanium bikes of all shapes and sizes, imported from a couple of trusted contract framebuilder workshops in Asia. Much of their regular bikes look to be low-cost reproductions of run-of-the-mill round tube road & mountain bikes. But Turner is also an unabashed time trialist, and happy to experiment.

That white-sided bike is gen 2, but let’s take a quick look back at gen1… 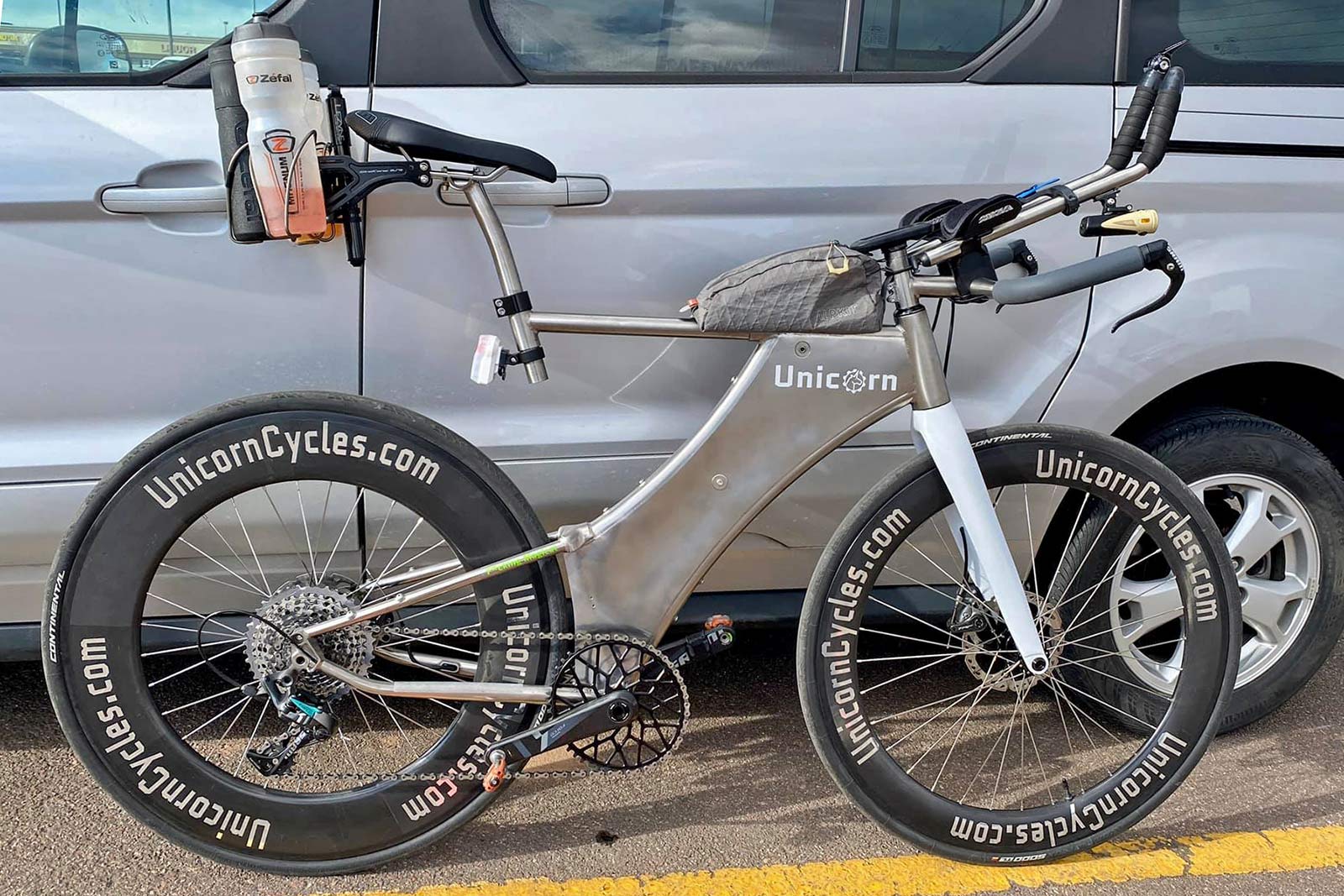 Turner says the idea for the wild ultra-distance TT prototype was inspired by old school beam bikes like the Softride Rocket and TitanFlex, of course with a dose of Trek Y-Foil thrown in too – really bouncing around his head in 2019.

So he designed his own ti-Y beam bike with an adjustable telescoping toptube that gave him huge flexibility in the position of his saddle, plus actual tunable flex/suspension between the rider and the rigid backbone of the bike. And he had his regular Asian (likely Chinese?) frame supplier turn it into reality. 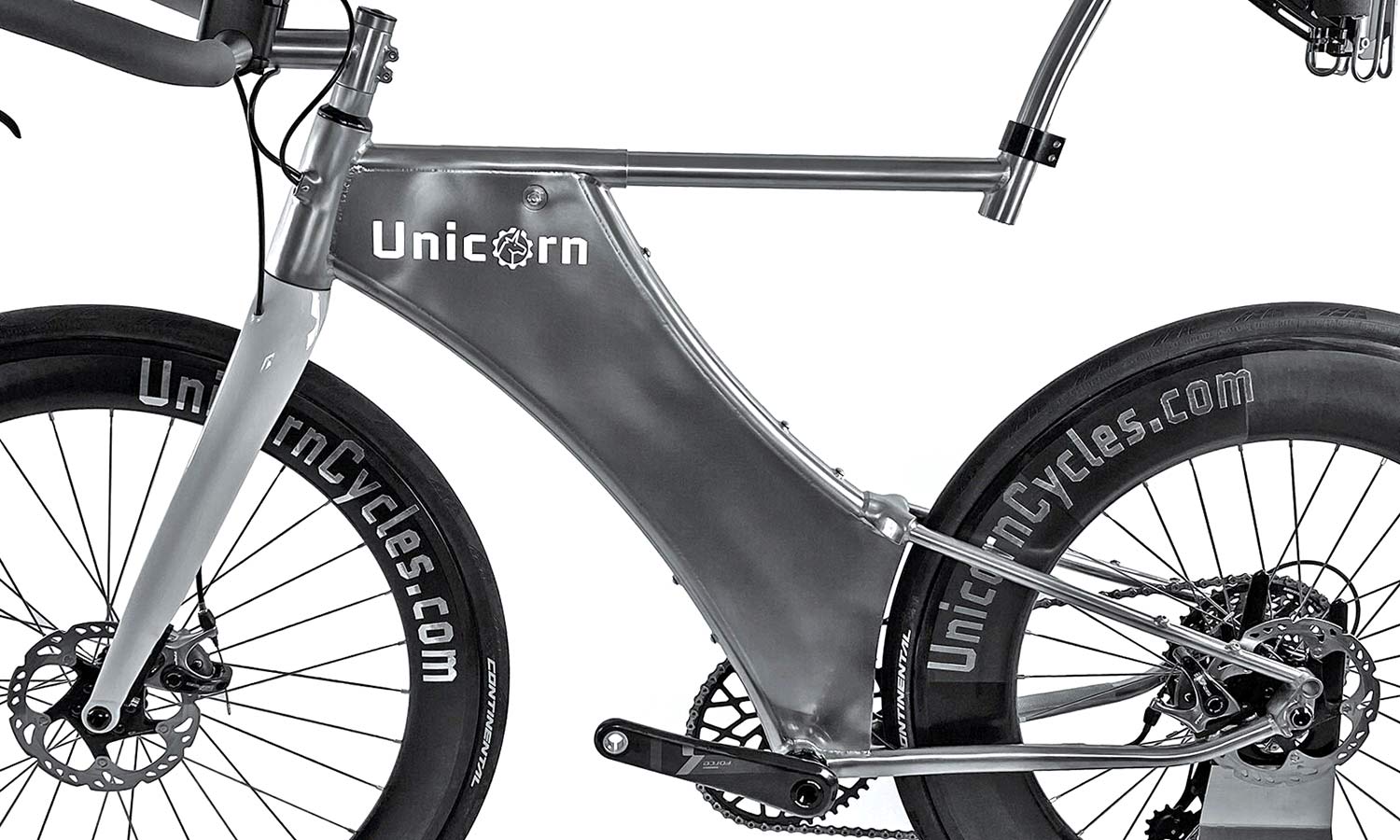 The result was a fairly rough-around-the-edges proof-of-concept frame that Tuner rode on ultra-endurance time trials throughout 2020.

Then it was finished off with a pretty neat set of custom titanium bullhorn basebar with an integrated stem, plus custom ti ski-bend extensions, and of course a ti seatpost. 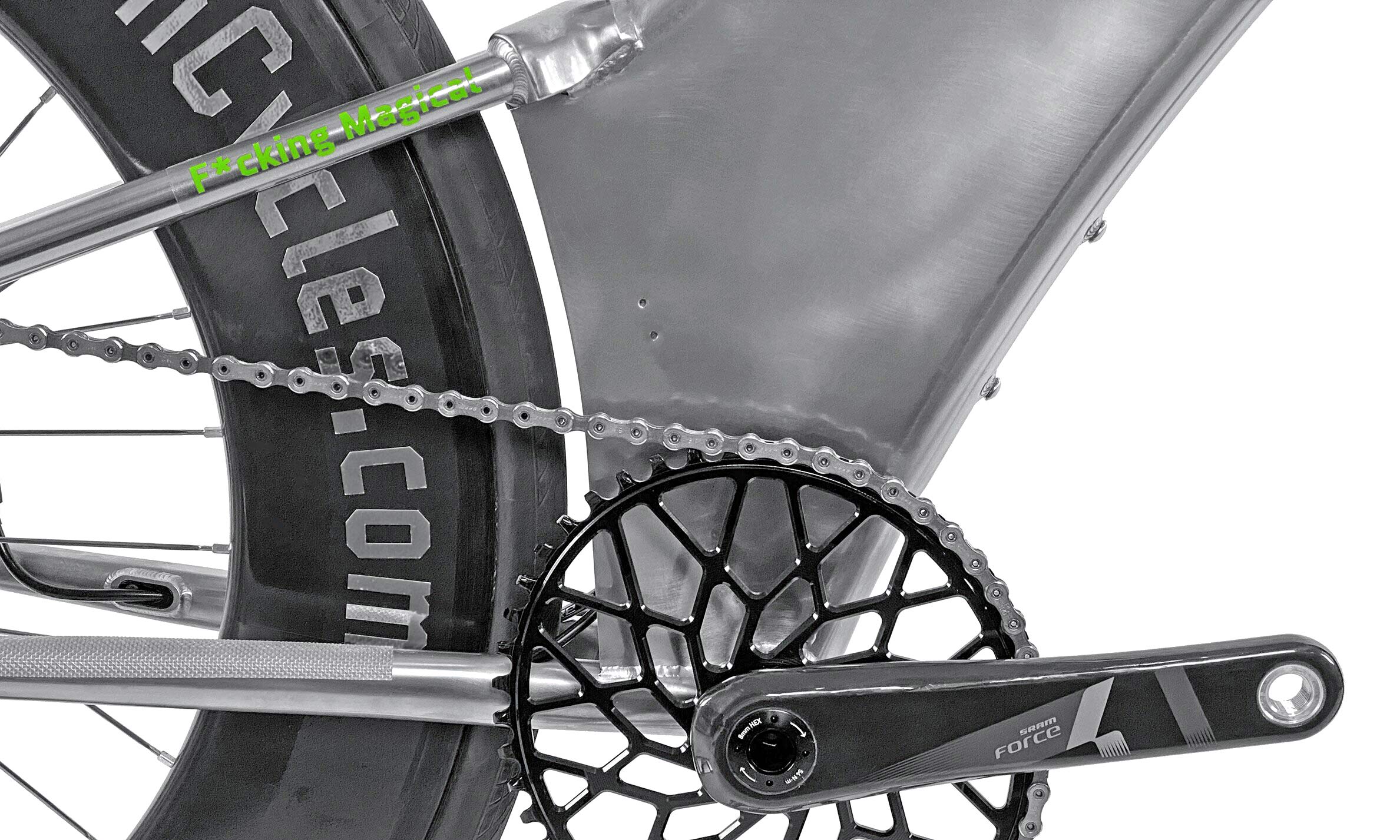 He said its rear end was quite stiff, coupled with the desired flex at the saddle and a feeling of slicing through the air. But there’s always fine-tuning to be made…

Btw, Unicorn Cycles’ motto is: “Don’t buy an off-the-rack bike! Own a Unicorn, and ride something F*cking magical!” I kinda love that. 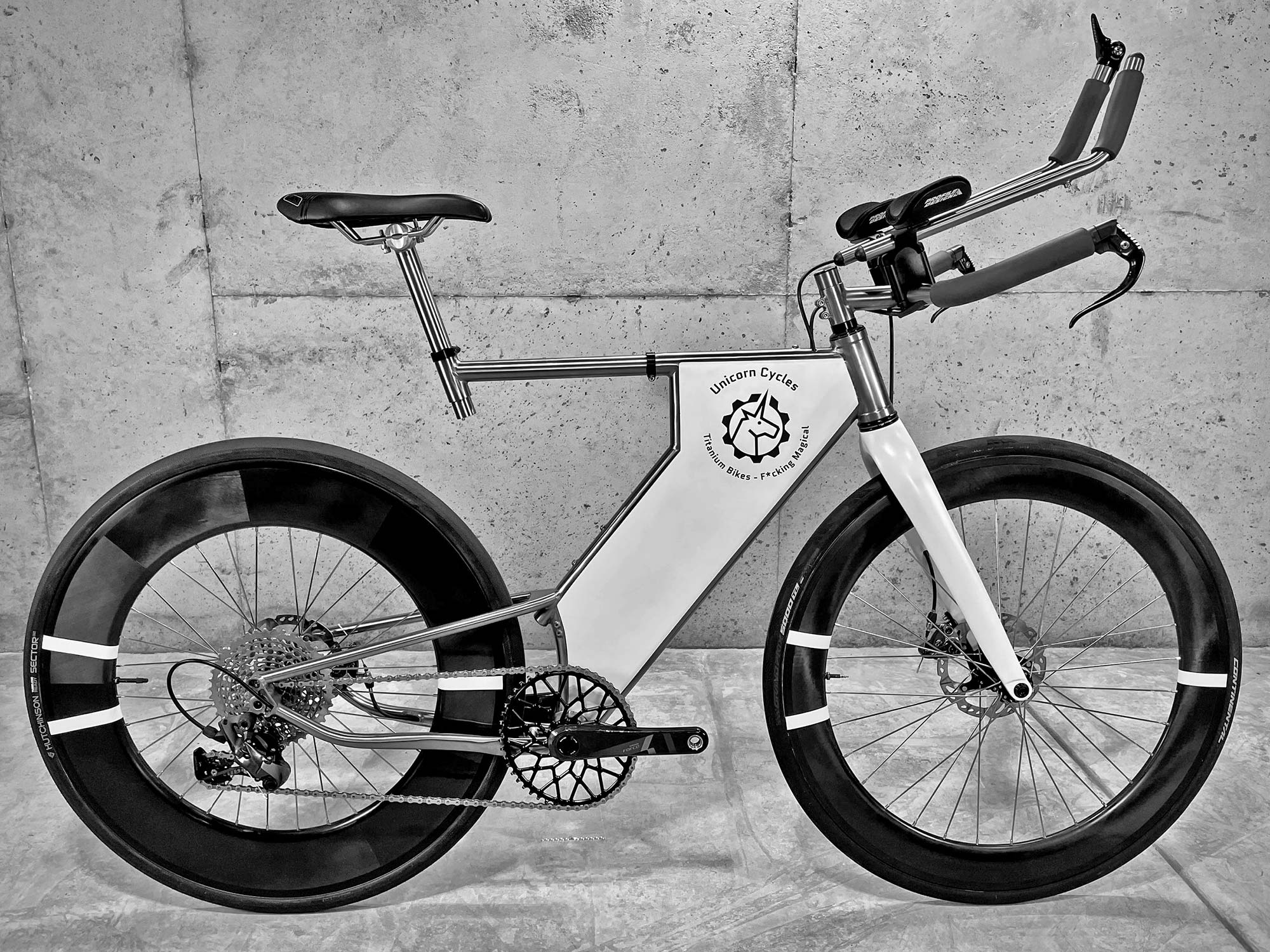 With what looks like a simplified design and more precise execution, the new v2 it TT prototype got polished tubes and a high-contrast white Cerakote finish for the new side panel design. Really, what isn’t getting Cerakote-d these days?! 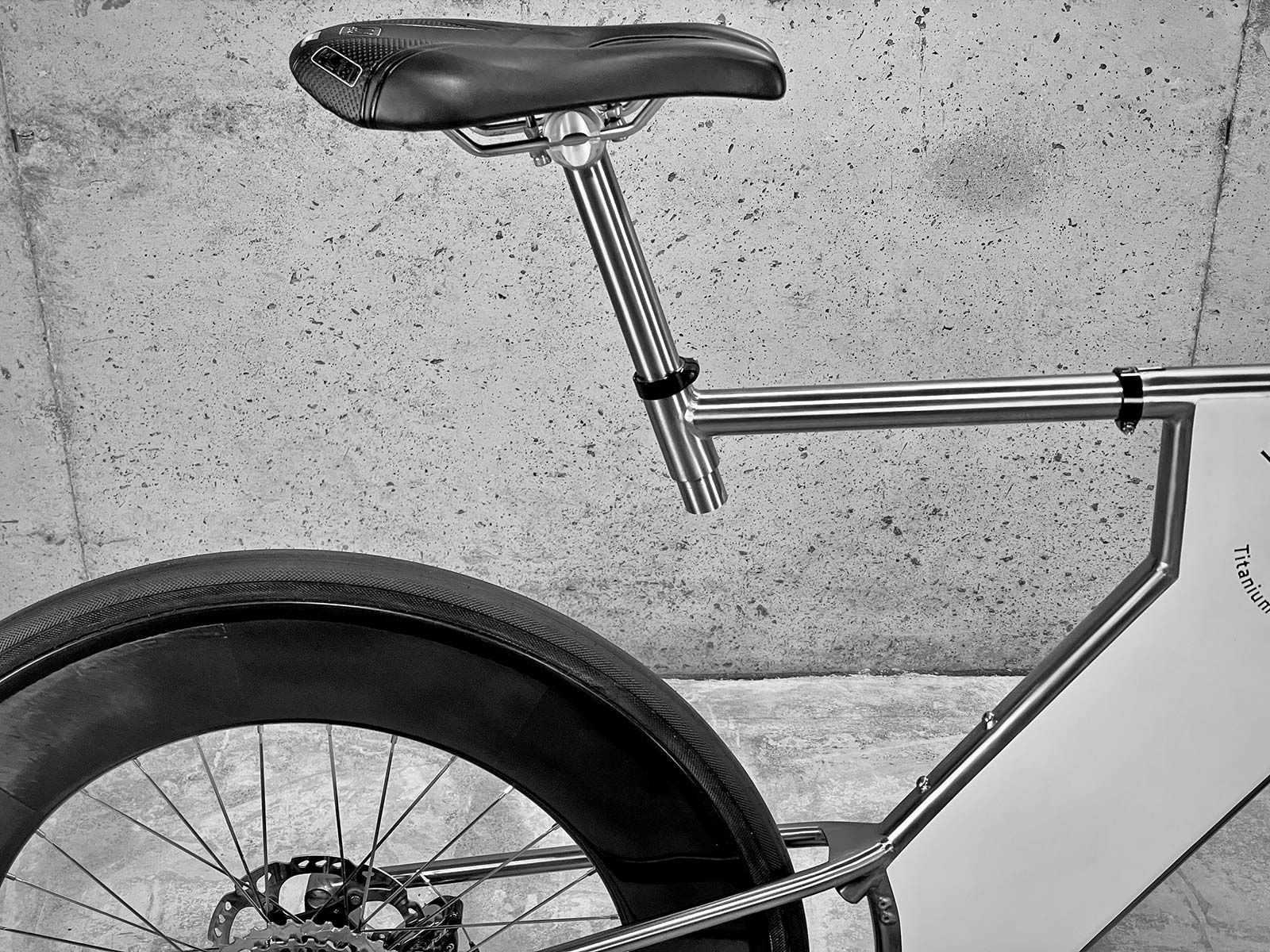 The new bike was upgraded with thicker titanium side panels for improved stiffness and better finishing, a move to angular tube shapes vs. those original swooping curves, a revised & simplified telescoping toptube clamp layout, and decreased toptube flex overall for improved efficiency while riding. It also moved the internal cable routing behind the headset to get them out of the wind. 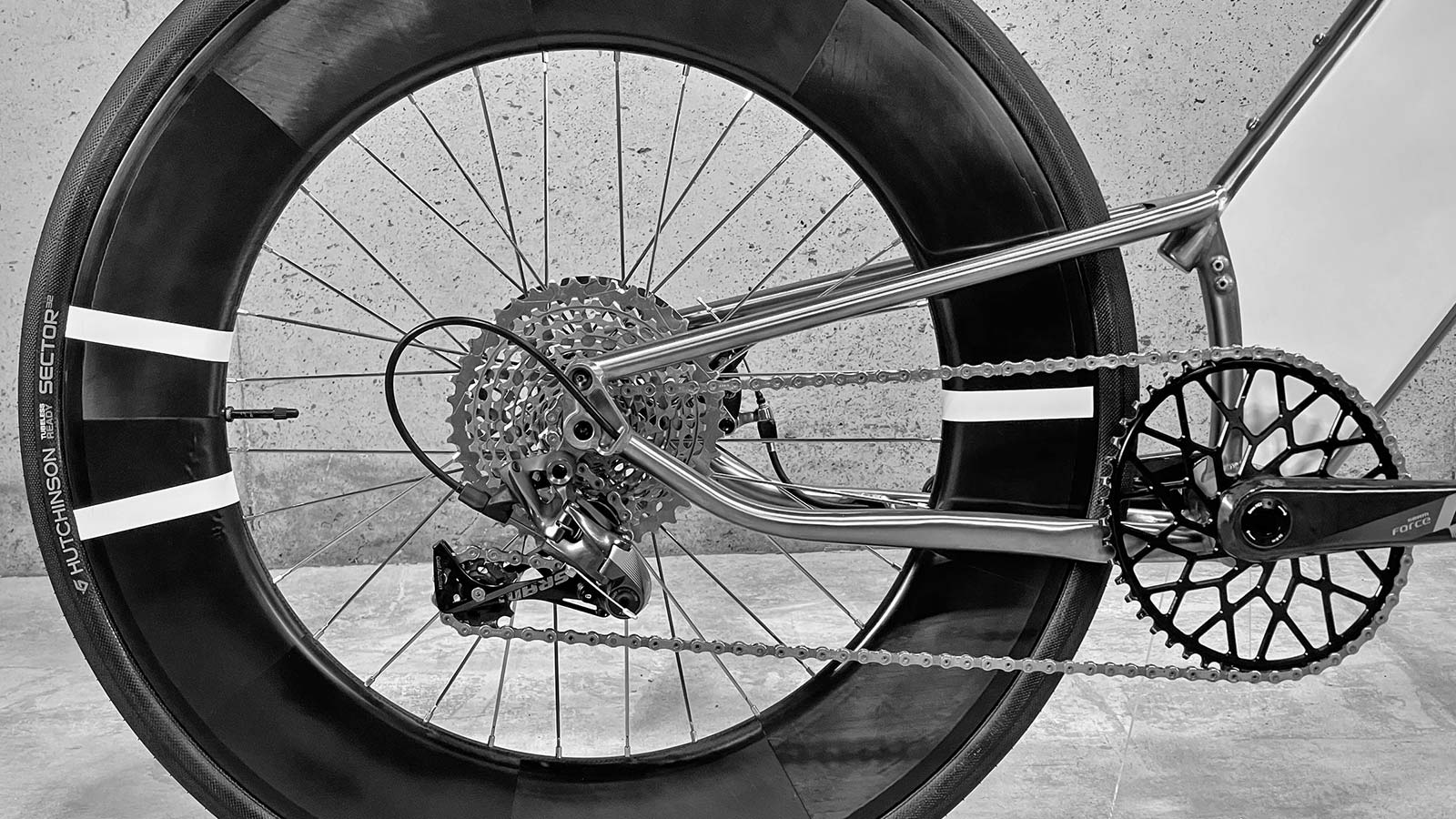 This latest prototype retains the stiff dropped chainstay rear-end design of the original – with 12mm thru-axles & chain stay flat mount disc brake – but gets a more refined custom fabricated seatstay junction. Unicorn also prefers to build bikes with simple 1x drivetrains, but this v2 prototype builds in the option for a front derailleur. 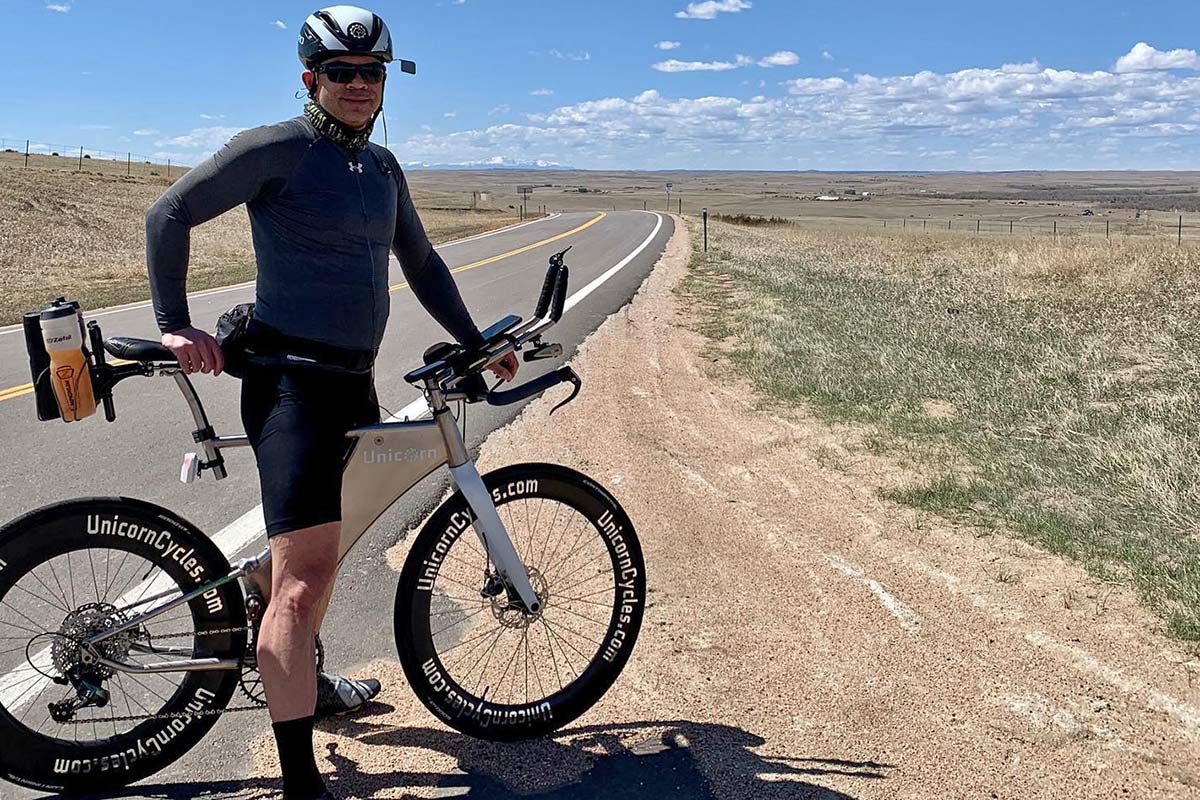 Will there be more titanium ultra-endurance TT bikes from Unicorn Cycles? Only time will tell.

But there’s plenty of more conventional bike options too… 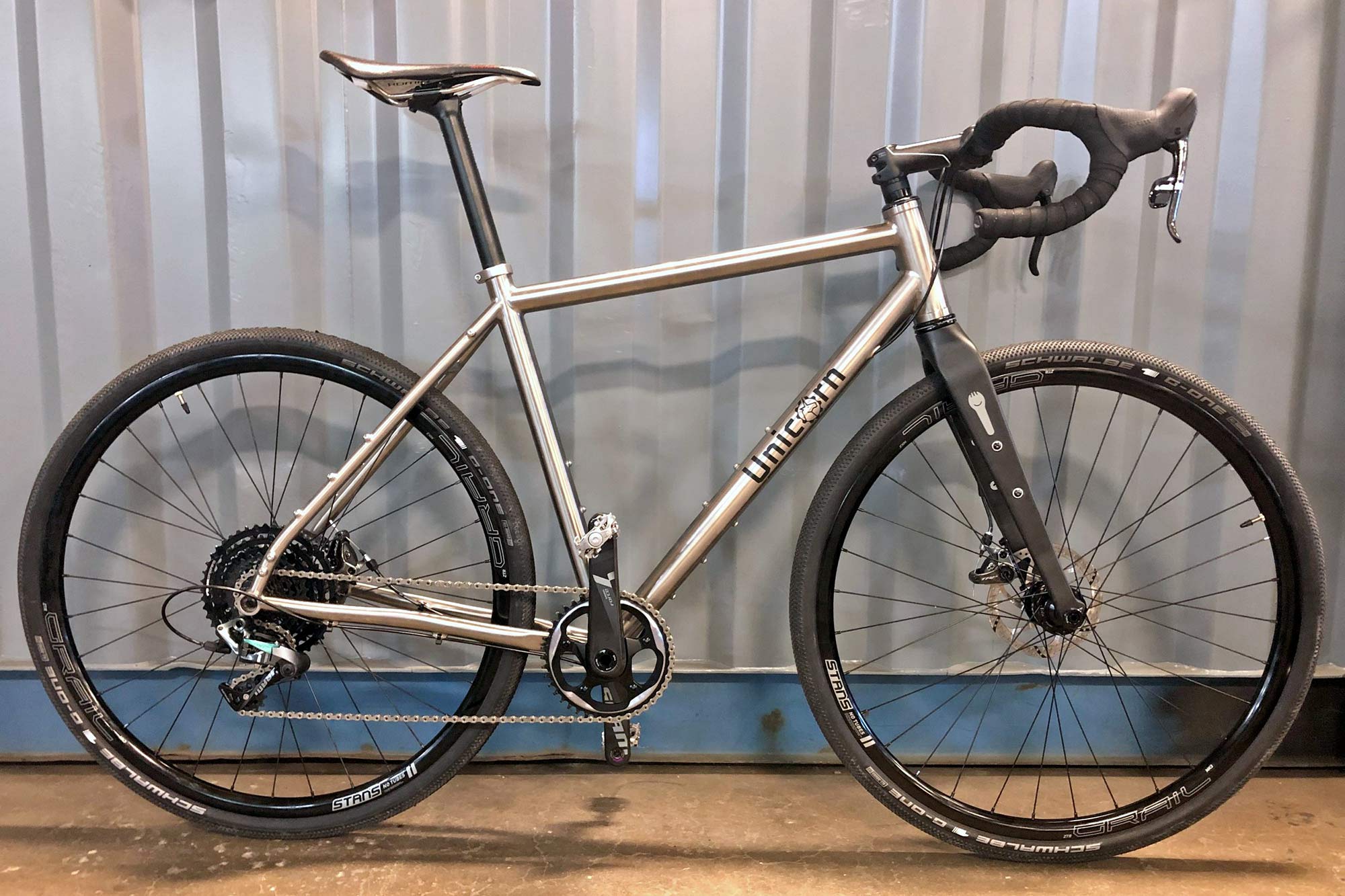 They sell a limited number of stock titanium gravel frames with 50mm tire clearance and plenty of accessory mounts in a pretty wide 6 size range (XS-XL) for just $1150, or from just $325 more including a Rodeo Labs fork & Cane Creek 40 headset. 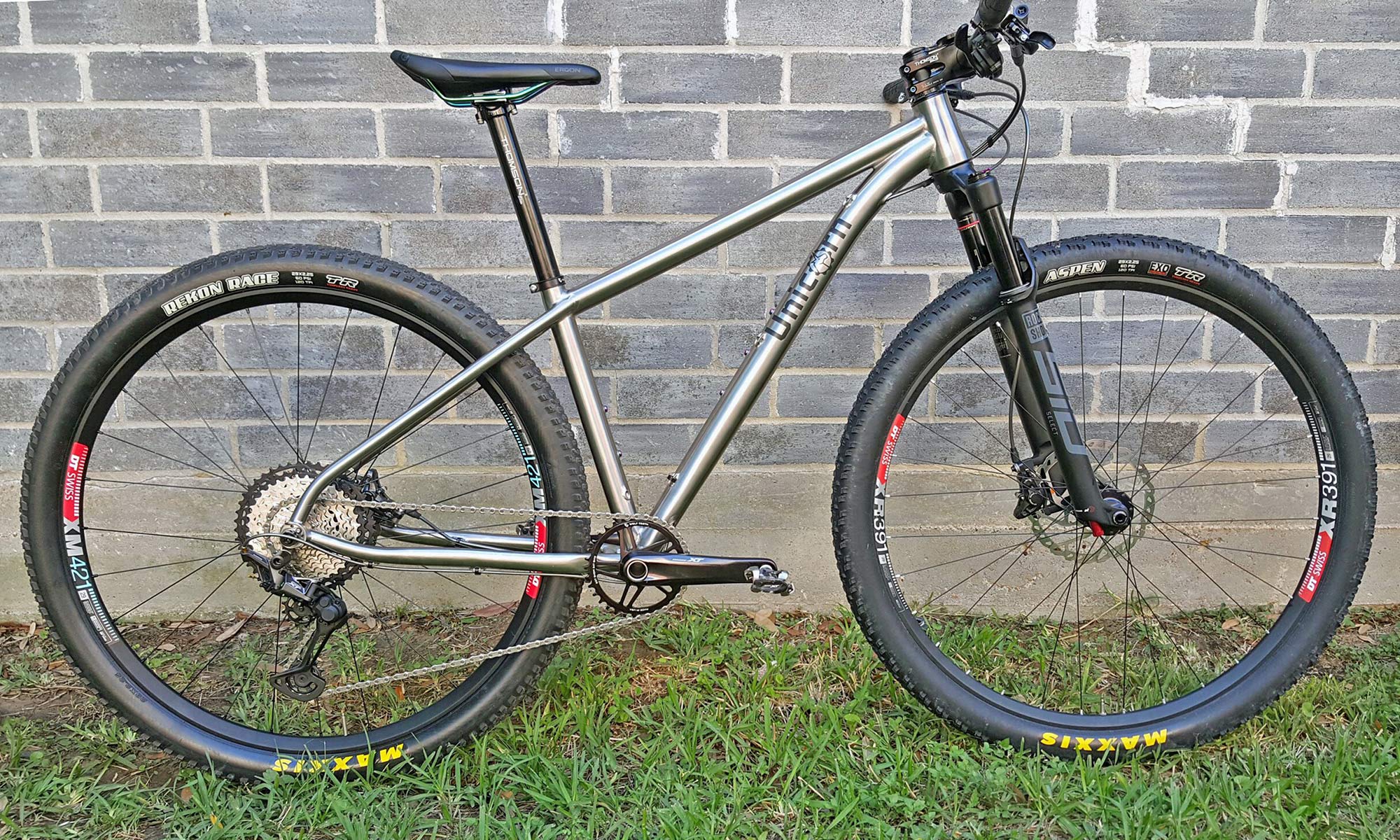 And they custom build lots of more conventional road bikes, hardtail mountain bikes, and even fat bikes from 3/2.5 titanium. Road & gravel frames sell for just $1450 & mountain frames for just $1550, with 15-week turnaround, with complete bike builds often in the $3200-5000 range. 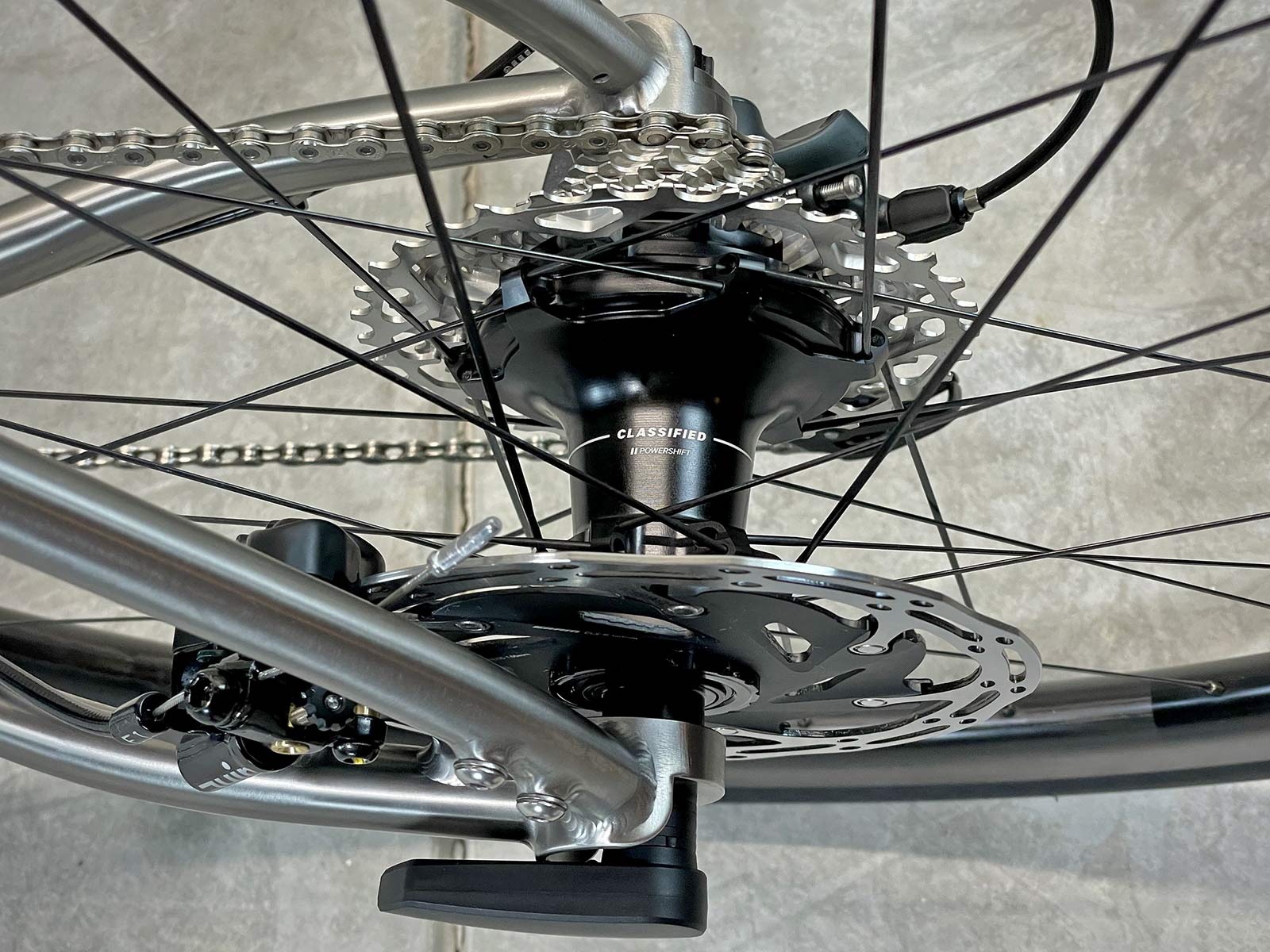 And now Unicorn has joined the growing ranks of bike makers building with Classified Powershift modified drivetrains – turning 1x bikes back into stealthy, faster-shifting 2x setups. Sticking with their affordable ethos, Unicorn is prone to start with a mechanical 1x groupset and even mechanical disc brakes like on this all-road demo bike. 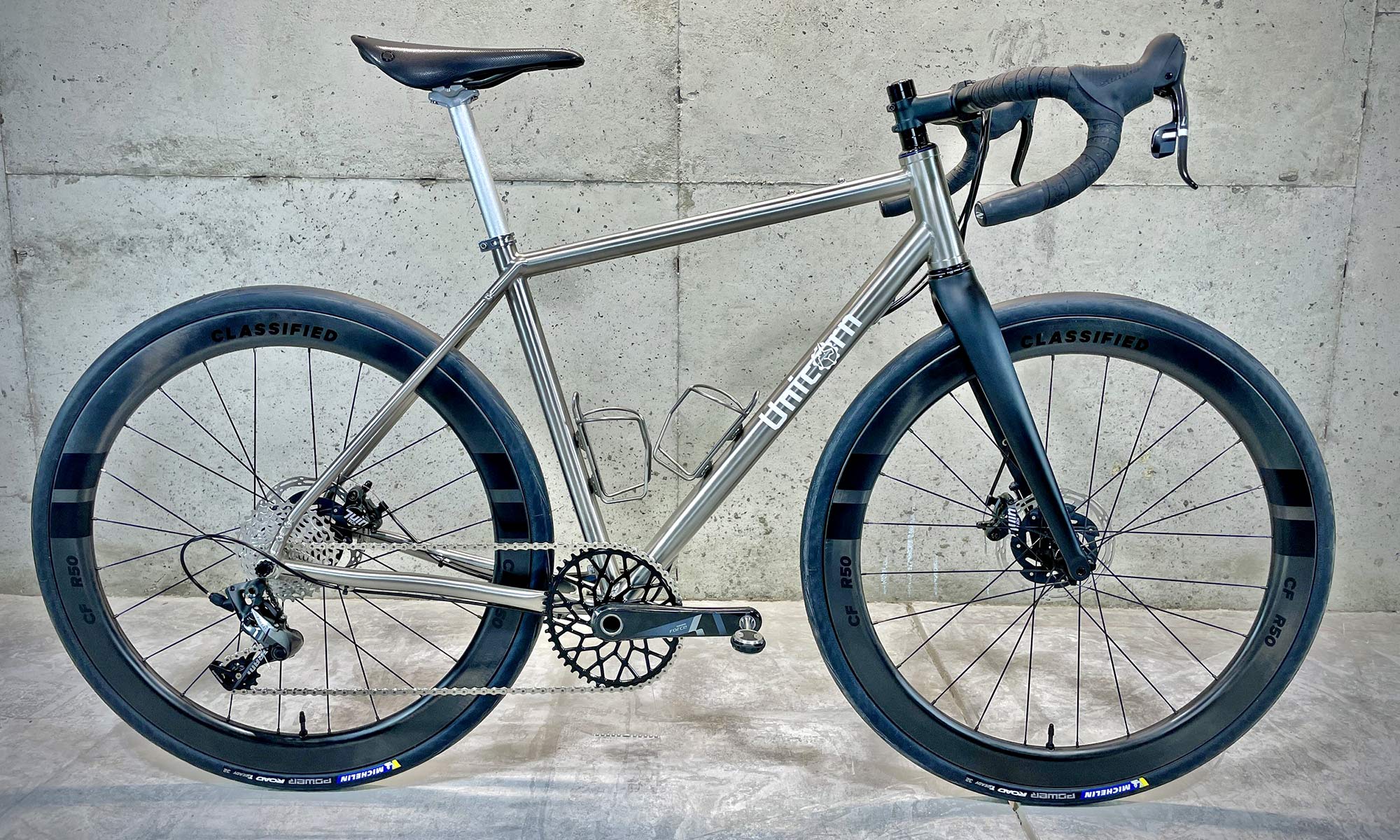 It still costs $2400 for a set of Classified carbon wheels with their wireless electronic shifting 2-speed hub and cassette, so it’s not going to come super cheap. But deducting the cost of a standard wheelset & cassette, you might be able to ride away with a titanium Unicorn with Classified shifting for somewhere in the $5000-6800 range.

That’s going to be possibly cheaper than the stock carbon Rose Backroad X Classified, plus an upgrade to a custom titanium forever frame & carbon wheels. Probably worth a closer look, right? 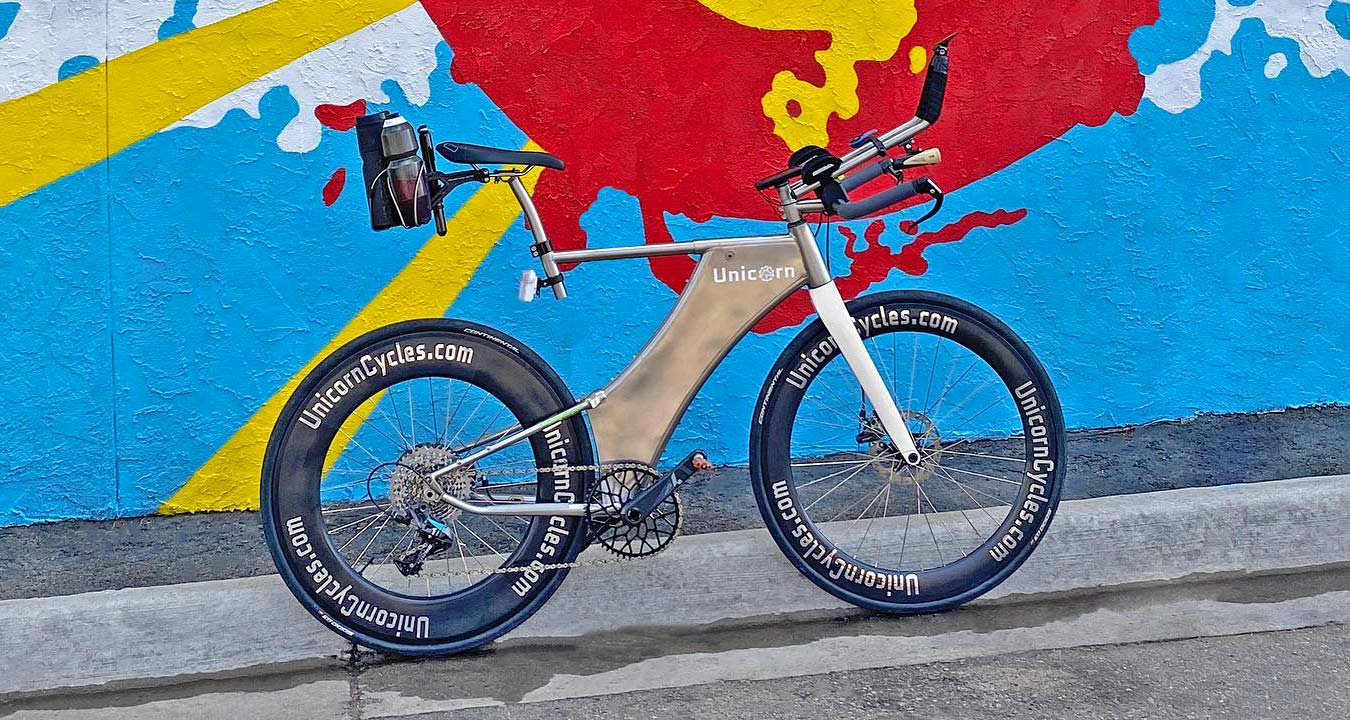 But… you know what you actually want, is one of those TTi-Y bikes…

I was under the impression that beam bikes were now illegal in triathlons, and had been for several years; they were never legal for UCI events AFAIK. Other than perhaps RAAM or JRA, where can such bikes be ridden?

beam bikes are not illegal in triathlon

real talk: why would anyone buy a custom frame from a company that is just slapping a label on an outsourced frameset these days? In the era of consumer-direct, if you really want a custom made-in-china Ti frame, what is stopping you? I know of a few such frames being ridden local to me that didn’t require a middle man and a ” brand”.

It might be beyond some people’s ability, knowledge, or desire. Not everyone wants to spend time going back and forth with Waltly.

As Astro_Kraken mentioned, “It might be beyond some people’s ability, knowledge, or desire”.

Unicorn Cycles is highly consultative; we work closely with each client and strive for effective communication. We can meet with local clients, talk over the phone, or have online meetings. We offer advice regarding the bike’s intended use, bike fitting, handling characteristics, geometry, tube diameter, tube thickness, tube shape, tube bends, bottom bracket type, head tube type, dropouts, cable routing, mount points, and component selection. Unicorn offers complete bikes, sourcing components at wholesale prices, and passing the savings on to our clients. Unicorn adds another layer of quality control which is often a concern when going direct.

Going direct will always be an option for riders, which is great, although the percentage of riders going this route is tiny. The majority of riders will buy a bike off-the-rack, which is awesome. Unicorn Cycles and others fill the gap between off-the-rack bikes and going direct, and the uncertainly that direct entails.

1100 bucks for a Ti frame seems hella reasonable to me…

I purchased a custom Unicorn gravel/randonneuring bike last year. I wanted the consulting expertise and quality control. We’ve spent at least 30 – 40 hours talking about options and evaluating every dimension. Of course, Jason and I ride often together, so he knows exactly how I ride. Result: fast and comfortable on both road and gravel.

Hello Mike, Thank you for your support. -Jason

No seat tube means more frame twist. The work you do to twist one way, then the other, is wasted work that does nothing for propulsion. After following a friend on a Softride and seeing that twist, I sold my Softride and replaced it with a conventional frame. No surprise, I was faster on that bike.

Hello Fraser, No seat tube does not necessarily mean lost power. There are plenty of modern TT bikes without a seat tube that are rigid, this Unicorn prototype included. Many double diamond frames have some flex, but it’s not as noticeable. Regards -Jason Turner

Should really close up the gaps between the tires and frame.

Hello Jessica. The first version of the prototype had a small gap between the tires and the frame. For the second prototype, we took a different approach and fabricated titanium wings/shields that would close the gap but decided not to use them, the fit wasn’t perfect. We wanted a bit longer chainstay for better weight distribution and better handling, the longer the chainstay the wider the gap we need to cover. The goal wasn’t to make the most aero titanium frame. It’s a balancing act between aerodynamics, comfort, and safety. We will revisit the tire gap in the next version. Regards -Jason Turner