Tons of companies like to claim to be the lightest. But while many use creative accounting to get their published weights low, premium Spanish carbon frame maker UNNO goes the other way. “Ready to ride” at 790g, their new Unno Aora is the “lightest production XC hardtail” molded in one step and ready to buy now, shipping in just a matter of weeks…

Unno claims a real world weight of 790g (+/-5%) for the 29er hardtail, including its minimal paint, cable ports, all threaded inserts, the alloy rear derailleur hanger, and even the rear thru-axle. That’s a lot more realistic than some companies’ claims. 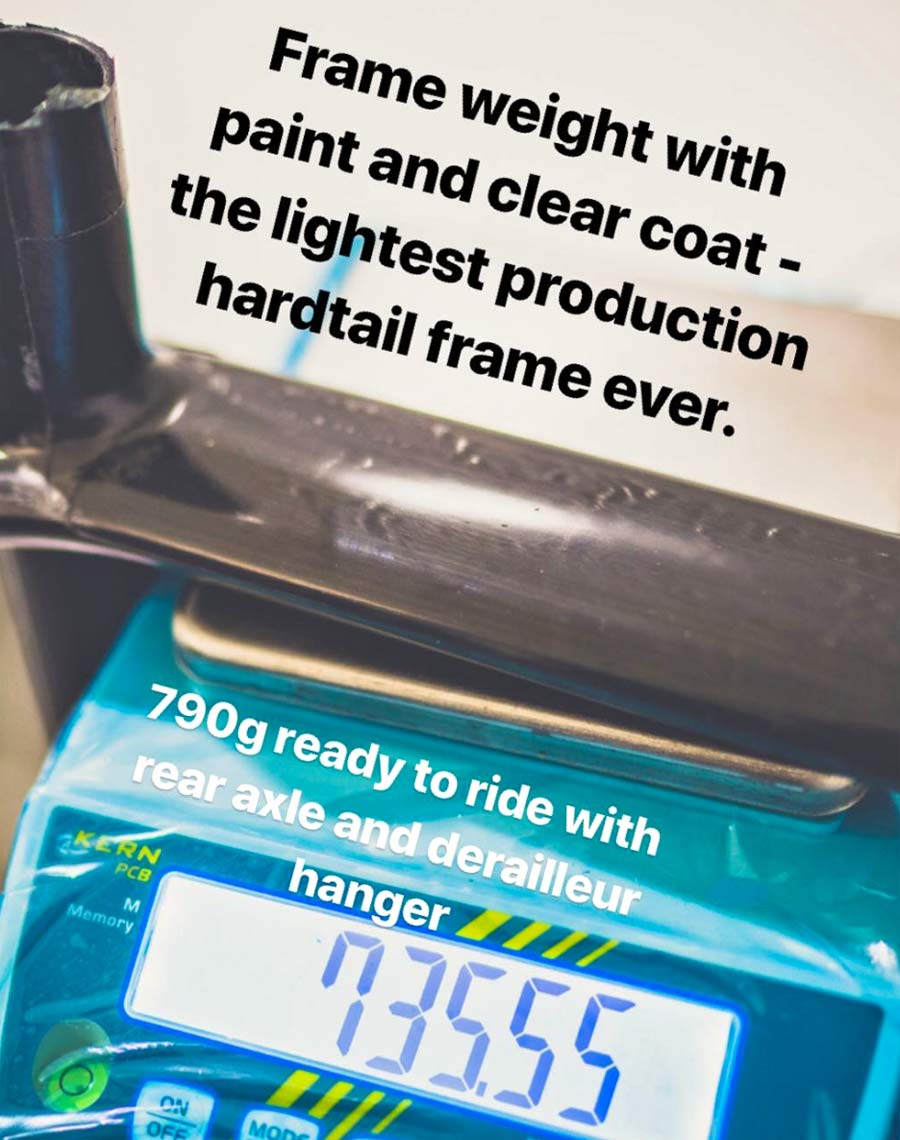 Even with that said, the frames they’ve shared so far come in well under that. This first real production frame tipped the scales at a mere 736g on Unno’s scale, presumably before some final finishing. Fresh out of the carbon mold, it was just 686g. That’s crazy light, with this step comparable to some big manufacturer’s claims.

Like the rest of their bikes, the new carbon Aora XC hardtail is made by hand in Unno’s Barcelona workshop in limited numbers. And ultra light weight comes with both premium performance & price – and a single size for now to fit the average rider.

Unno doesn’t like the idea of a bike made up of separate parts that are then bonded together to make a whole, so they mold those hundreds of individual carbon plies together into a single piece with no joints. While they don’t tout the Aora as being ‘monocoque’, building it as such with a single mold for each frame size allows them to shed grams while retaining strength & durability. Like most of their other premium carbon bikes, Unno’s new Aora is first available in a single frame size. The reasoning behind that is that a large number of riders can fit on this M/L sized bike, but with so much time in development, testing & layup optimization, Unno can just realize a single frame size more quickly to get the bike out to medium to tall riders with deep pockets more quickly. Even though it is an ultralight hardtail designed for cross-country racing, the Aora gets modern trail riding geometry inspiration from Unno’s more aggressive full suspension bikes. That means a long & slack front end, a relatively steep effective seatpost with a low stack height to get XC racers nice & low. The XC race 29er, even with its crazy short 418mm long chainstays, still builds in clearance for up to 2.4″ wide tires.

The Aora features a PF92 bottom bracket for those extra short chainstays, zero stack tapered integrated headset cups, gets Boost 148 rear spacing with a one-piece dropout+derailleur hanger, and a post mount rear brake for a 160mm rotor, with one brake tab each on the seat & chainstay. The 1x only frame has completely internal cable routing through molded carbon guide tubes, and uses a 31.6mm seatpost, including stealth dropper routing. The Aora is a light race bike with a rider limit of 90kg/198lb and includes only a single set of water bottle bosses (although an optional second set can be added.) Unno is accepting consumer-direct pre-orders now for the Aora frames for 4000€. Only 50 total numbered frames will be sold in 2019, with orders sent out first-come, first-served. Don’t worry, this isn’t some far off target, though. Unno has dialed in their production over the holidays, and will start shipping the first Aora frames before the end of January 2019 – plenty of time to build it up for race season. Complete bike builds will be available later in 2019. BTW, just to reiterate how much potential this ultra light XC hardtail holds, we’ve already heard that Gustav Gullholm & Unno are chatting about the possibilities for a new world’s lightest complete XC bike build. You may remember Gustav, aka @dangerholm for his two crazy ‘world’s lightest 29er mountain bikes’ that we featured back in March. Well, now Gustav is talking about a <6kg über-light build with the new Aora!

Carbon is stupid strong. I bought a cheap rigid carbon Chinese fork to make a sub 20 lb full rigid XC single speed. Even has carbon steerer. I thought what the heck for $100 I can break 3 of them and still spend less then a $400 or $500 Whiskey carbon fork. I was cautious in the beginning so I would not eat dirt if my forks broke on a technical fast decent. They are still holding up with no damage and I am as fast as other riders in my age and fitness category on full suspension, full geared cutting edge technology bikes. Of course manufacturers can cut corners for profits and have flaws in processes and materials, but Carbon fiber is some strong material and does not weaken with multiple bumps or time. And the hard tail carbon bike is not designed for big heavy people doing gap jumps or 5 foot drops. It’s a nimble light machine for long days in the saddle with plenty of climbing where you don’t feel like you are dragging a weight up the hill and super quick acceleration out of corners. They are just fun to ride. One gear helps too.

Its been a while since I lusted over a hardtail!

Gustav is such a hack!! LOL! Love ya buddy!!

I see you Joe.

This isn’t the bike for me, but hot damn! is that a badass looking race bike!

How many sizes are they going to offer? One for all?

Us
Reply to  Kristina Koscova

“Like most of their other premium carbon bikes, Unno’s new Aora is first available in a single frame size. “

I can only imagine how many hours of CAD work went in to designing the carbon ply layup for this frame. Incredible.

The one redeeming thing besides the weight, is the fact that it has a zero stack headset so you can put an angle set headset in there to fix the absurd slack head angle to that of a good handling XC bike. Much like my race winning 830g Epic HT frame has… I hope the worlds lightest bike includes a dropper this time! 😀

Absurdly slack? Now if it was 64.5 or something I would agree that is a little slack for xc but 67 is pretty steep, right? I thought my only recent hardtail with a 68 was way too steep for comfort. On a hardtail it is always steeper than the printed number due to sag, so it looks a bit perfect to me, other than I would need another 50 mm of reach to fit.

XC hardtails are usually around 70-69deg. and a bit less for a FS one. 67deg hardtail is more like a trail bike.

Some old school weenies who can’t descend need to get with the times as to what makes a fast bike handle well.. the geometry of this bike looks absolutely dialed

I want to criticize this but… it looks pretty badass

Too big for my britches. Too rich for my wallet.

What happens when you eventually crash? (frame replacement?)

Carbon can take some abuse. Just depends how hard you crash, what you hit, how you hit it, etc. Most likely if you crash hard enough to break your bike you are going to be more worried about yourself. Ride in control.

Looks like an amazing bike for the purpose it’s intended for- but throwing that rather heavy (and flexy) RS1 on the front of the bike seems like an odd choice to me.

@UncaJohn, would you aspect (lets say cannondale whatever) to replace a frame after crashing if it’s made of alloy?

It’s a good looking frame but even at 72kg I would crack the chainstays or seatstays in 6 months. The short chainstays and slack hta are more reminiscent of a fun bike than a race bike. I give it a solid “meh”.

So all of a sudden you are an engineer who knows more than Cesar and his 4 years of development and testing? You know nothing of the layup yet you know that a frame will fail? Gimme a break (deleted)