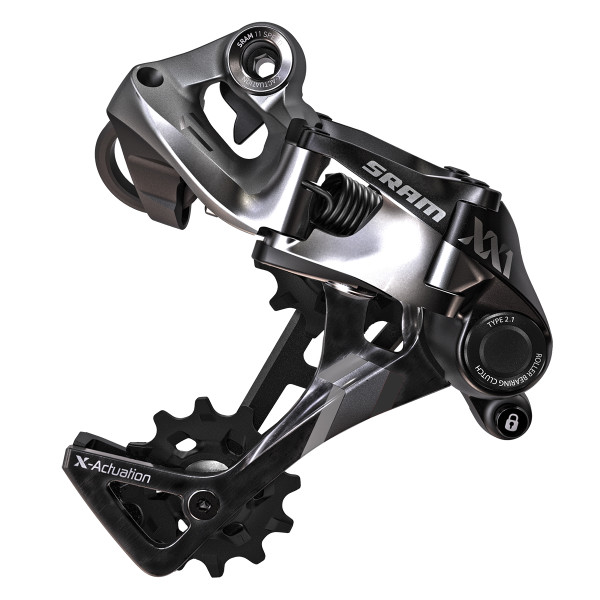 In our post introducing the new SRAM XX1 Black group, we reported that there were no mechanical changes to the group, only cosmetic. Some of our eagle-eyed readers noticed visible differences in some of the photos. Readers “zoso” and “steve” noticed that the pulleys looked different in the photo, lacking the “wide/narrow” tooth pattern and windows in the pulleys of the original.

We followed up with SRAM to see if they had made running changes to the derailleur. Duncan Riffle, SRAM MTB PR guy told us that the photos were incorrect in the launch, and re-issued the proper photo to us, shown above.

UPDATE: Some readers also noted that the mounting bolt appeared to be an allen key. Riffle said “the mounting bolt is a T-25 actually. The pictured image has a previous version used in older style XX1 Red (5mm Allen). It can be confirmed that new XX1 Black will have a T-25 just like XX1 Red.”

So while the photos may not be entirely correct, SRAM is stating again that there are no mechanical changes to the Black products over the red colored XX1 line.

UPDATE: Readers also noticing the “Type 2.1” inscribed on the clutch, so we asked Riffle about that as well. “Regarding the Type 2.1 clutch, this is a simple running change implemented last year actually. Since  the introduction of our Type 2 rear derailleurs with Roller Bearing Clutches, we have made numerous improvements and small refinements.  The new Type 2.1 is the culmination of all these updates.” So, while Type 2.1 is something new, its not technically new to the XX1 Black group, as it appears to have already been in production on red colored XX1 groups for some time.

Thanks to our readers for being detailed in their viewing of the photos!

They also appear to have done away with the extra-soft, extra-shallow T25 mounting bolt.

Agreed. Narrow wide pulleys do not make sense. It is especially hard to fix the chain in the field when it jumps a tooth. I changed to 12 tooth KCNC pulleys. Never looked back. They last longer than the stock pulleys and shift just fine.

Unless that mounting bolt swap is another photoshop error, it can be considered quite an upgrade.

Lame. It needs some improvement. The B-tension screw is some weird size too. T15 or T10. I had trouble finding something to adjust it, to try and minimize how often the chain skipped on the NW pulley.

Hopefully they’ll fix the known problem with the cable channel as well on the derailleur, where it makes the u-turn. Darn thing will pop right out of the channel if you dump a bunch of gears at once. Ive had it happen 3x now. You go from a 1×11 to a 1×3. Sux. Otherwise a great group!