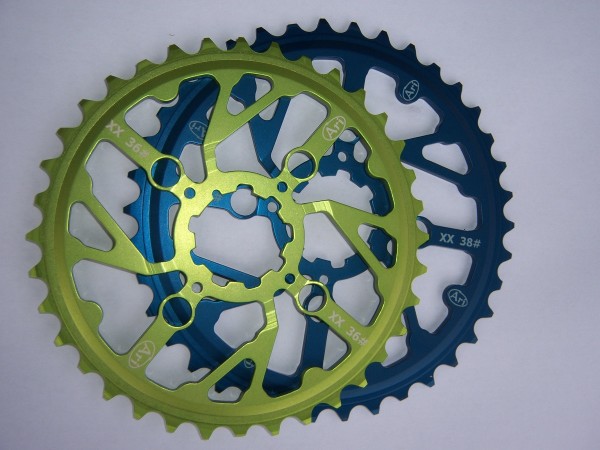 The latest cassette enhancement comes to us through ARI Bike, but this one is a little different. Instead of yet another cog for the cassettes already served by the OneUp, Wolf Tooth, and more, ARI’s cog is meant for a different cassette – SRAM’s pricey XX model. If you’re stuck with an XX cassette but are hoping for a little more range, ARI’s upgrade cogs are worth a look.

Details after the jump.

Our Italian is a little rusty, but installation appears to be fairly straight forward. Once you remove the last cog alloy cog from the remaining steel cogs, simply install the ARI cog and the rest of cassette as usual. 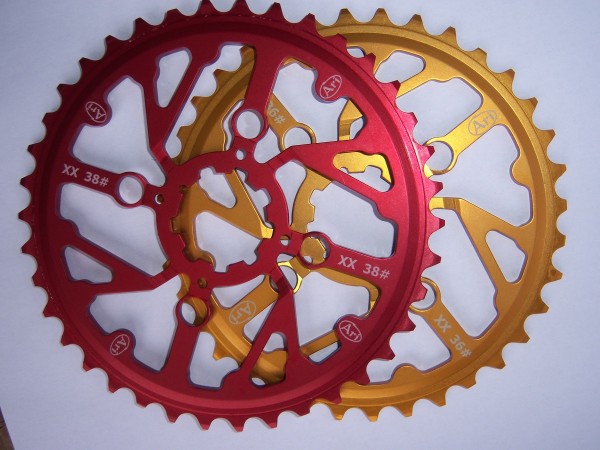 Why offer a 36t cog which is the same as the standard cassette? We’ve heard reports of the largest cog wearing out (though not many), but it does offer a chance to keep an old cassette running if you’re in that situation. More likely are the 38 and 39t cogs which will appeal to anyone with an XX cassette that was disappointed that cogs like the OneUp are not compatible. Those looking for wider range gearing for a 1x setup that currently own an XX cassette might be looking at the answer. 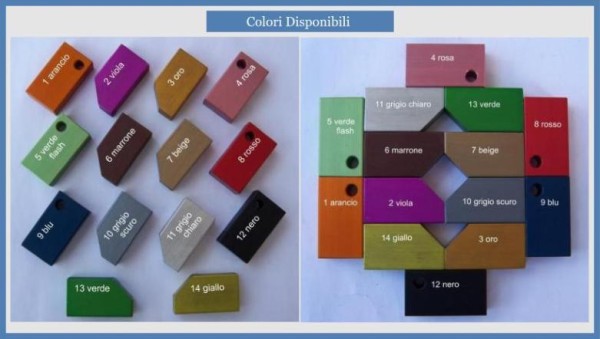 So you can spend $115 on an extra cog for that $300 cassette you have just layin’ around. Oh yeah, and it only works with one cassette on the market.

Man, just when I thought this sport couldn’t get any more niche…

Then again… I have always wanted a beige anodized cassette cog…

Oui so pricey for one cog. My bike is so out of date, Yeti 575 carbon seat stay, XT triple, and 26″ wheel. I guess I could lose the big ring, I only use it on pavement. I’m glad I didn’t go with the 29r which is falling out of trend for the 650b. Staying up too date can be very expensive if you believe all the hype.

err… main reason i wouldnt buy xx1 is the alloy cog will wear faster than the rest, now it’ll be replaceable!

Turn that frown upside down and take a look on the bright side.

It’s a great thing that a guy with a CNC machine can start a small business making this stuff. He likely got his start making something cool for himself and then thought maybe I can sell a few. He ins’t making trouble for you and is actually contributing some positivity to the world with some nice bright colors and innovation.

Kudos to him for being happy!!

Yup…that last cog is the first one to go…you can mitigate it by not cross-chaining on the 2×10 setup, but that usually means changing shifting habits when that small, punchy climb sneaks up on you and you don’t want to risk dropping the chain by shifting the front.

Also, on 1×10 conversions, it’s the first one to wear out. The chain line just as crossed up as on a 2×10 if you just do the chainring swap, less crossed if you do the 1X front crank conversion, but under stress, the chain will pop on/off that last chainring.

Both happen quite a bit among the ghetto 1×10 XC conversions who don’t see a need to replace the whole drivetrain for a 1x setup.

It’s cheaper than buying a whole new XX 10-speed cassette when the other nine cogs still have plenty of life in them.

Where can you get a X01 cassette, shifter and derailleur for $400?

If it’s just not your cup of tea, why do you have to be an a$$hat and piss on someone who finds it a perfect solution for his or her needs?

i like thise things because it shiws that soon many may be able to cnc machine such designs instead of being constrained to a few large vendors. the more the better!

Shop price. I priced out an entire XX1 groupset for just a hair under $600 directly through Sram. Make friends with someone who works at a shop or maybe even take a part time shop position.

That’s pretty neat. Though the stills don’t show it, the cog actually mates with the X-Dome cassette, transmitting torque to the freehub like the stock 36t. There’s a good amount of machining work there.

Nice sentence:
Once you remove the last cog alloy cog from the remaining steel cogs, simply install the ARI cog ….

is this article about cogs?

Waaaayyyyynnneeeee- why are u and your likes feel this need to complain about f*cking wheelsize on every component and review? fine u bought a nice bike a couple of years ago, I’ve ridden every kind of bike, every wheel size and technology moves forward deal with it!!! it’s a nice thing this, take your old shit and revamp it to make it better riding without having to pay for a new cassett and driver, how can this be a bad thing?

The alu sprocket on standard xx is warn down before the steel sprockets so it can be seen as spareparts for the xx. In that light can it be fitted to an x01 and xx1 as well if they make a 42t?

Any ideas how to actually order one of these things? Iv’e got a well used xx cassette in need of a new big cog, and this fits the bill perfectly. Problem is I live in California, not Italy. I don’t even see any ordering information on the linked page. Anyone got this figured out yet?

Not sure about that installation. The XX 36T cog is press fit, so this installs differently than the original. Also, what’s that big spacer? I’ve installed XX cassettes before and don’t remember ever seeing that thing–they just slide on and off. What engages the splines?

SRAM promised to sell replacement 36T cogs for the XX and then went back on their word. If this actually works, it will be a nice option.

Having said that, I have no idea how you’d buy one. And I’m actually in Italy right now. Might try emailing them, but my Italian is limited to ‘gimme some pasta.’

hi guys, we are actually and easily selling Ari cogs in USA … an not only
you can email at info@aribike.it
good ride!

I just got a 36 and 38 tooth cogs to replace some worn out 36 tooth on my xx cassettes. They seem to be very high quality with great fit and finish. Will give you a ride report later.

Can anybody comment as to how to remove the last cog from XX cassette? Also, where can I order this Ari cog?

Hi Eddie, For removing the last cog, I just used a large flat-blade screw driver and worked my way around. You can pry pretty hard on it. As for ordering, you can just email info@aribike.it and tell them what you want. It’s not cheap, but cheaper than a new XX dome and you can get different gears. I have tried the 38. Shifts great, you do need to be careful with some freehub designs. I could write a post if anyone wanted…