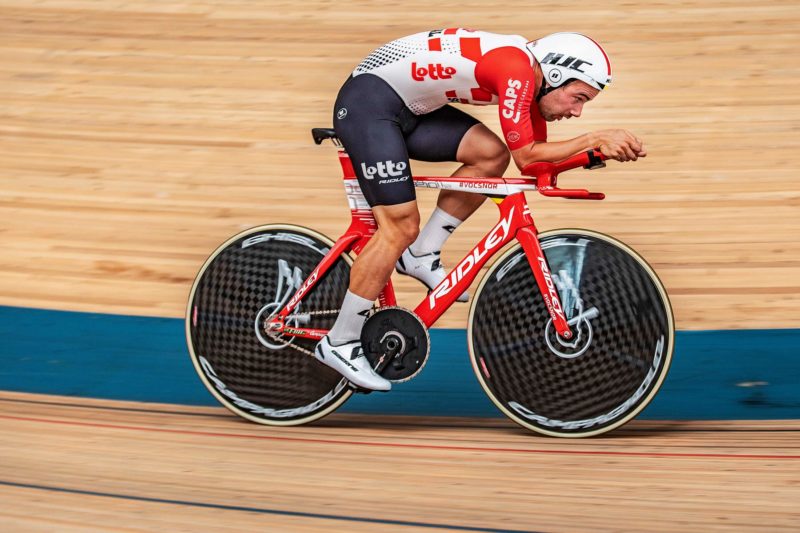 Current Belgian & European individual time trial champion Victor Campenaerts set a new Hour Record yesterday on the velodrome in Aguascalientes, Mexico. Clocking 55.089km in sixty minutes aboard a custom Ridley Arena TT track bike and all manner of customized kit, Campenaerts made it 563m or 1.03% further than Bradley Wiggins’ mark set in 2015. Let’s break down the unique setup ridden to the new record…

Victor Campenaerts set the new Hour Record on the short 250m, steep 41° banked high altitude indoor Aguascalientes track (almost the same size & banking of the sea-level London track were the previous record was set. At 1887m high though, there was less wind resistance for Campenaerts to cut through due to lower air density at elevation, but also less air to breathe to fuel the intense effort. Notably there have been four or five other serious men’s attempts at elevation since the UCI rule change back in 2014, and Campenaerts was the first to make it stick. 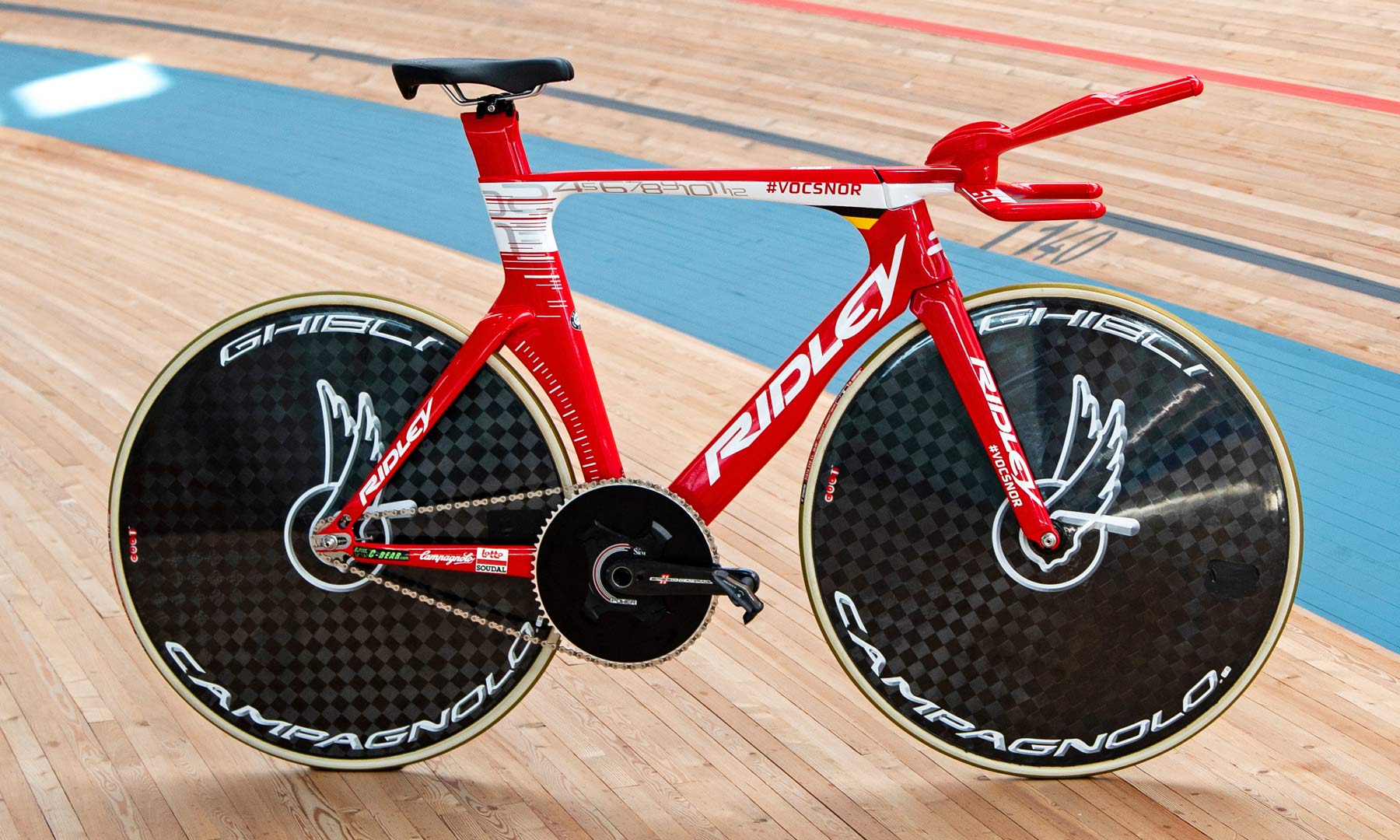 Thinner air sure, but it still had to be cut through for the ‘longest hour’ record ride. So Ridley custom-made Campenaerts a carbon Arena TT aero track bike with identical geometry to the Dean Fast time trial bike he has ridden to several championships in ITT. The bike gets a UCI certified sticker, so presumably that geometry is technically available to consumers as well. Weight isn’t an issue once he gets the bike up to speed over the first few laps, but it still needs be above the UCI threshold. Word is with all of the aero focus, the record winning bike tipped the UCI’s scales at 7.6kg. 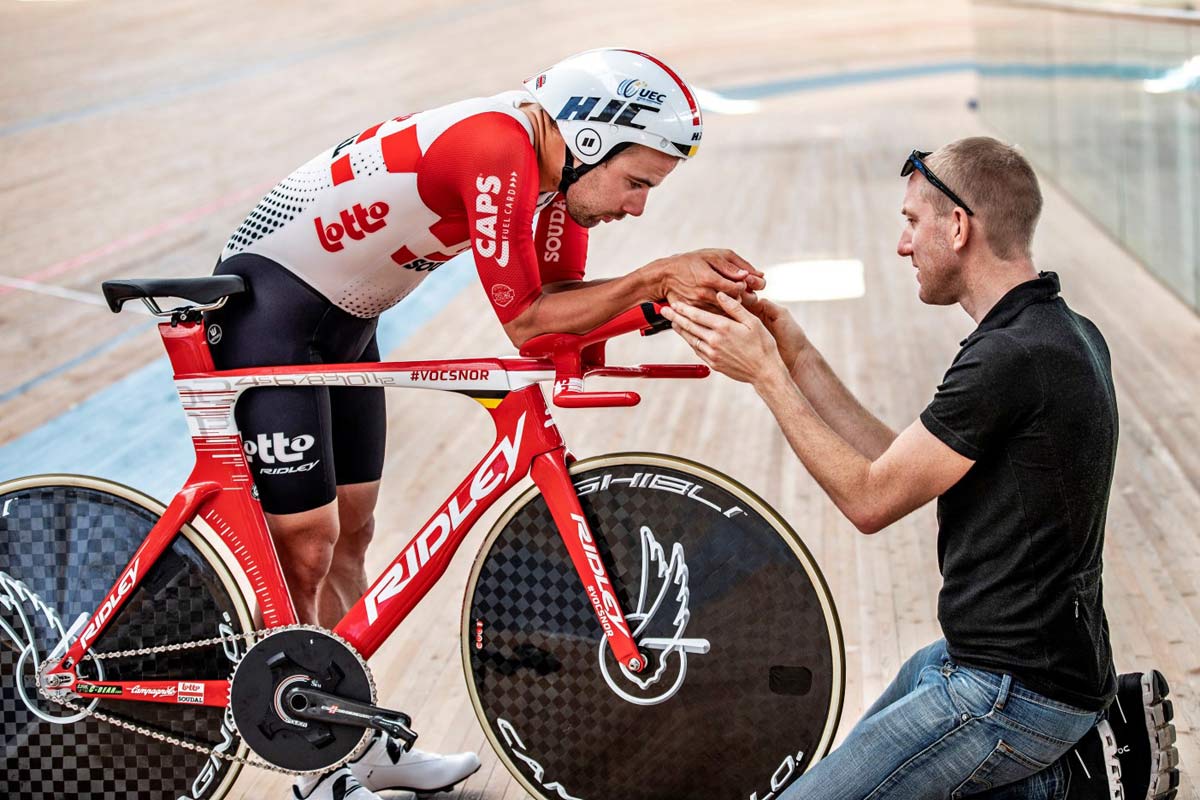 The Arena TT is a standard track bike in the Ridley line-up, based on their Dean time trial bikes, taking much of the new tech from the latest Dean Fast, but with a slightly more conventional looking front end and more space in the wheel cutouts. The bike features the same F-Surface Plus grooves on the downtube to introduce boundary layer air turbulence for lower overall drag over the frame. 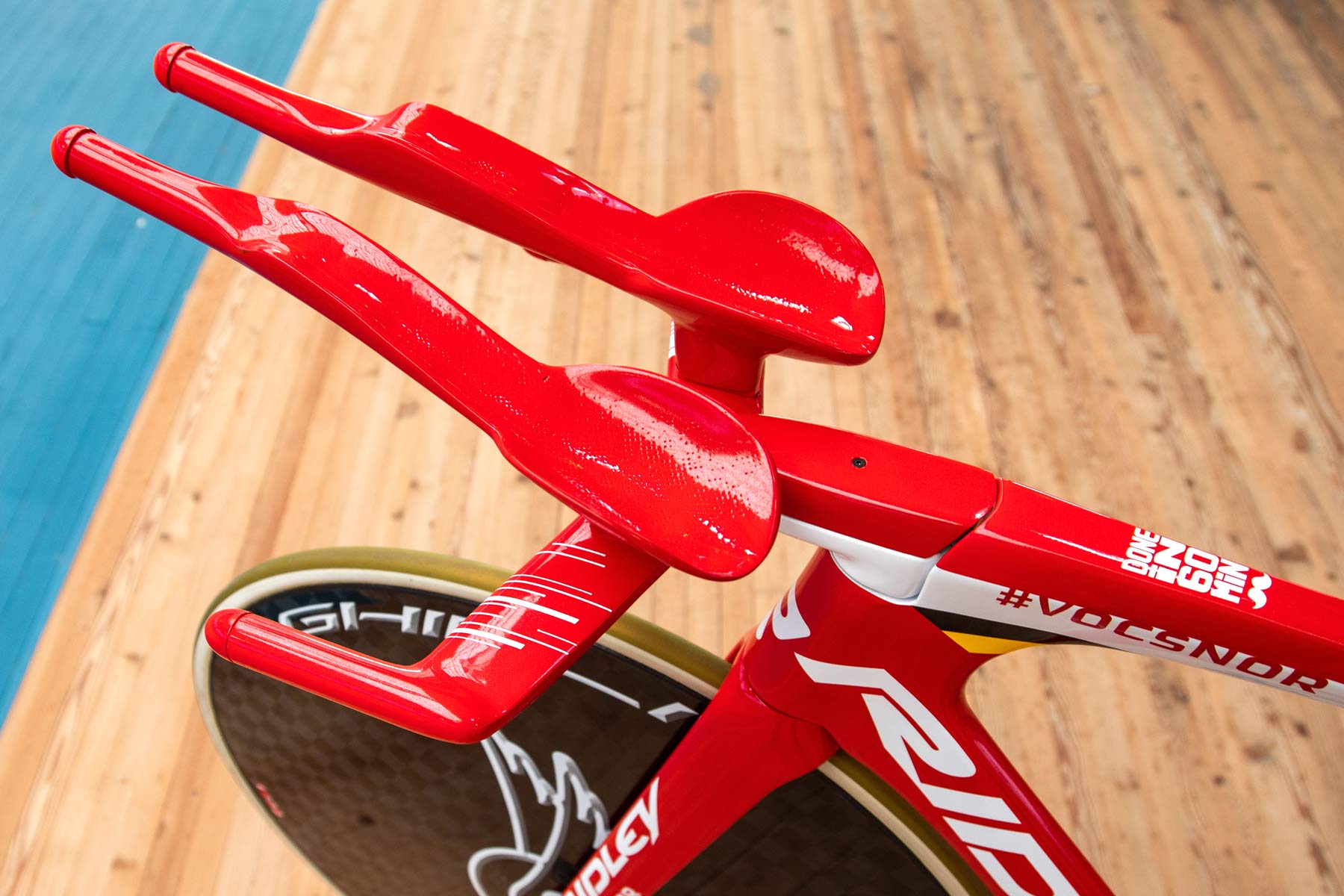 And of course Campenaerts’ bike, nicknamed the “Flying Moustache” got a custom paint job for a little extra motivation – like that note that he will be “done in 60 min”.

Looking at his bike setup though, the most custom element has to be those aero bar extensions. In development since January of last year when he joined Lotto-Soudal, Ridley custom molded a set of bars to Campenaerts’ arms with the idea of both creating a more comfortable distribution of weight along the entire length of his forearms, and of course making a more seamless aerodynamic setup. 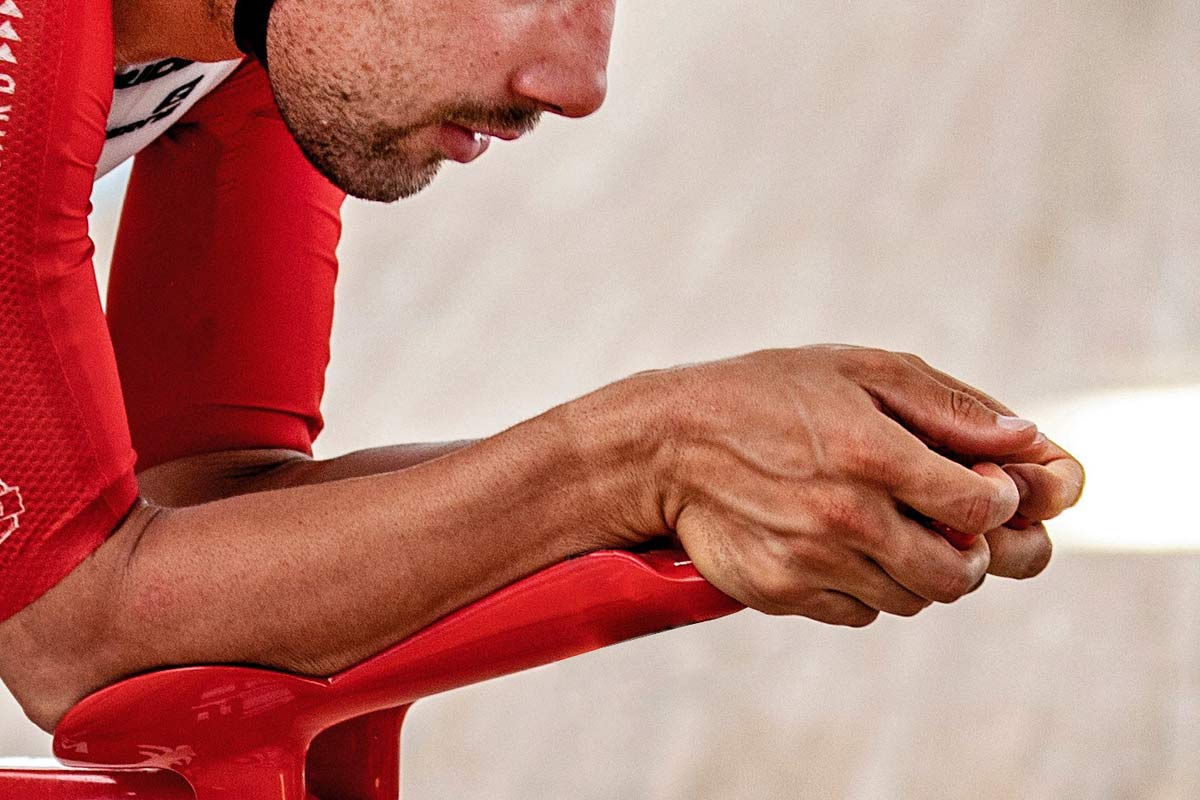 Once approved by the UCI, Ridley made a few sets out of carbon, and Campenaerts competed on the bars first at last year’s ITT Worlds where he took third. Besides offering aero gains, the extensions also give Campenaerts much more secure control of the bike in his forward aero position.

His basebar on the other hand was trimmed down to just 33cm wide overall. Since he only would use it for leverage to get up to speed during the first 23 seconds of his record ride, the narrower profile would great less drag over the remaining 59:37. 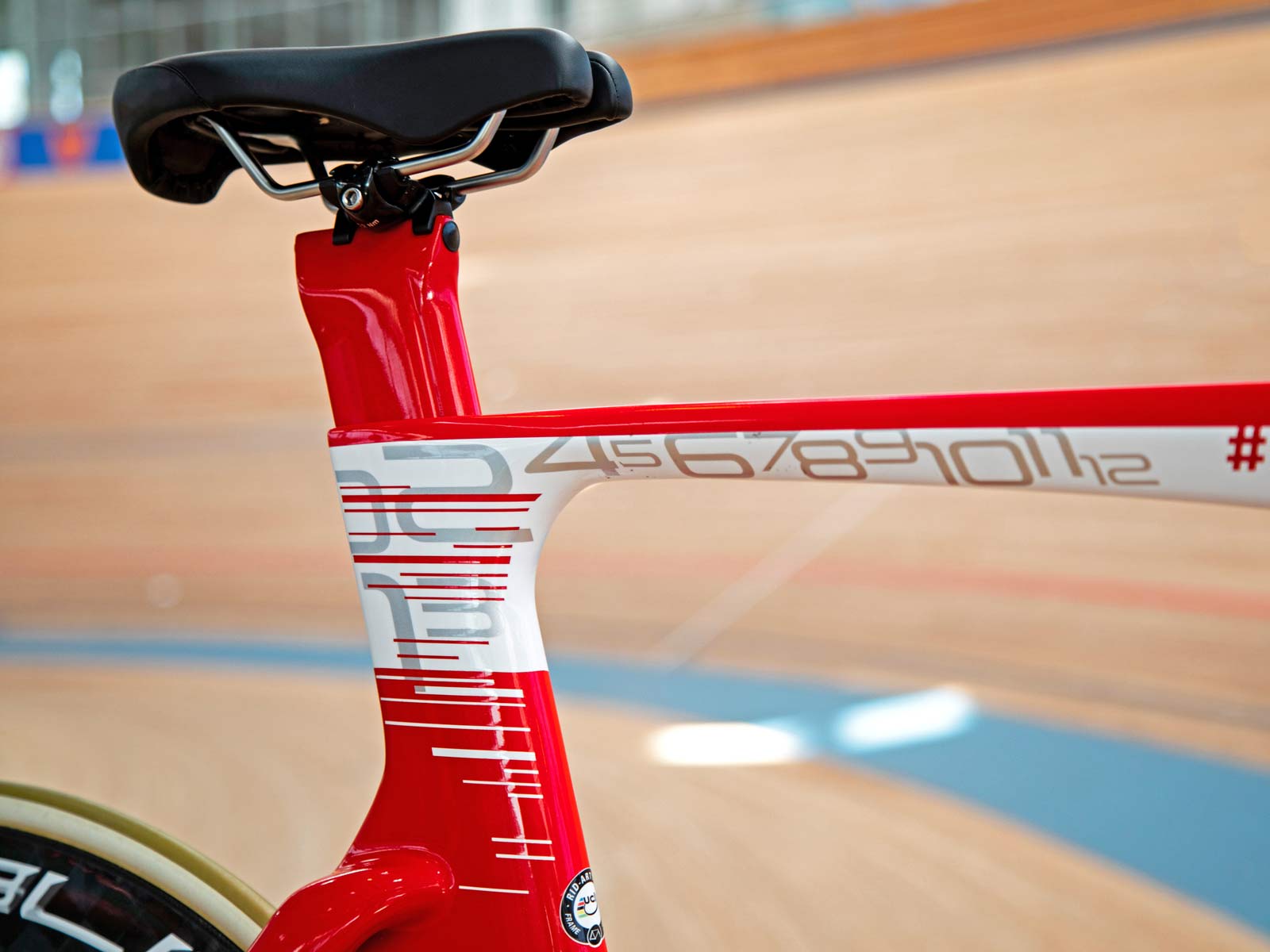 Not part of their official sponsorship, but to get the most forward support for his sit bones, and to stay comfortable enough to maintain his tuck and power output for an hour, Campenaerts sat atop a split nosed ISM Performance Short saddle, set forward on the Arena TT’s aero seatpost. 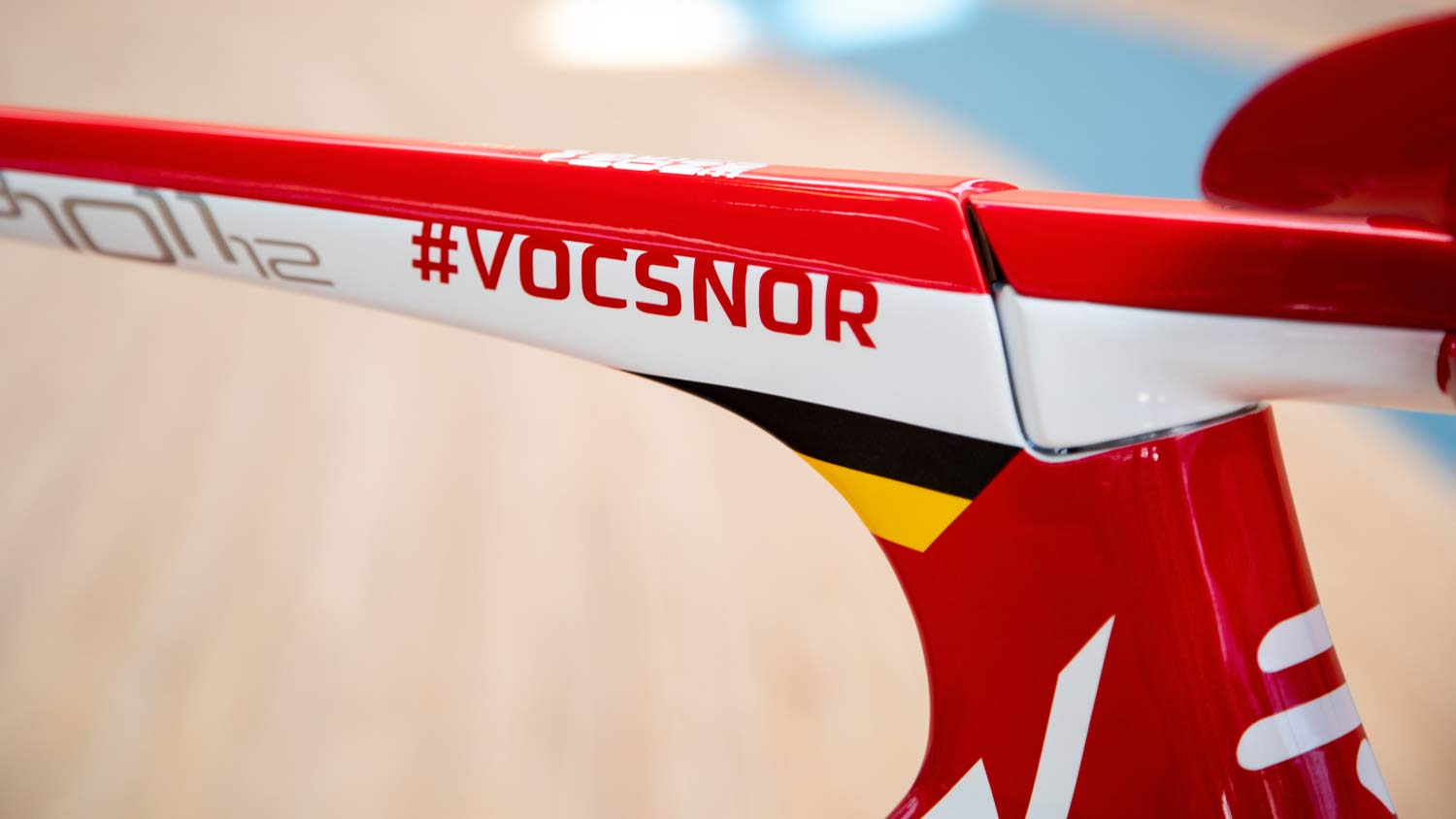 The front of the bike is neatly aero too, with a smooth level transition from the aero stem to the toptube. 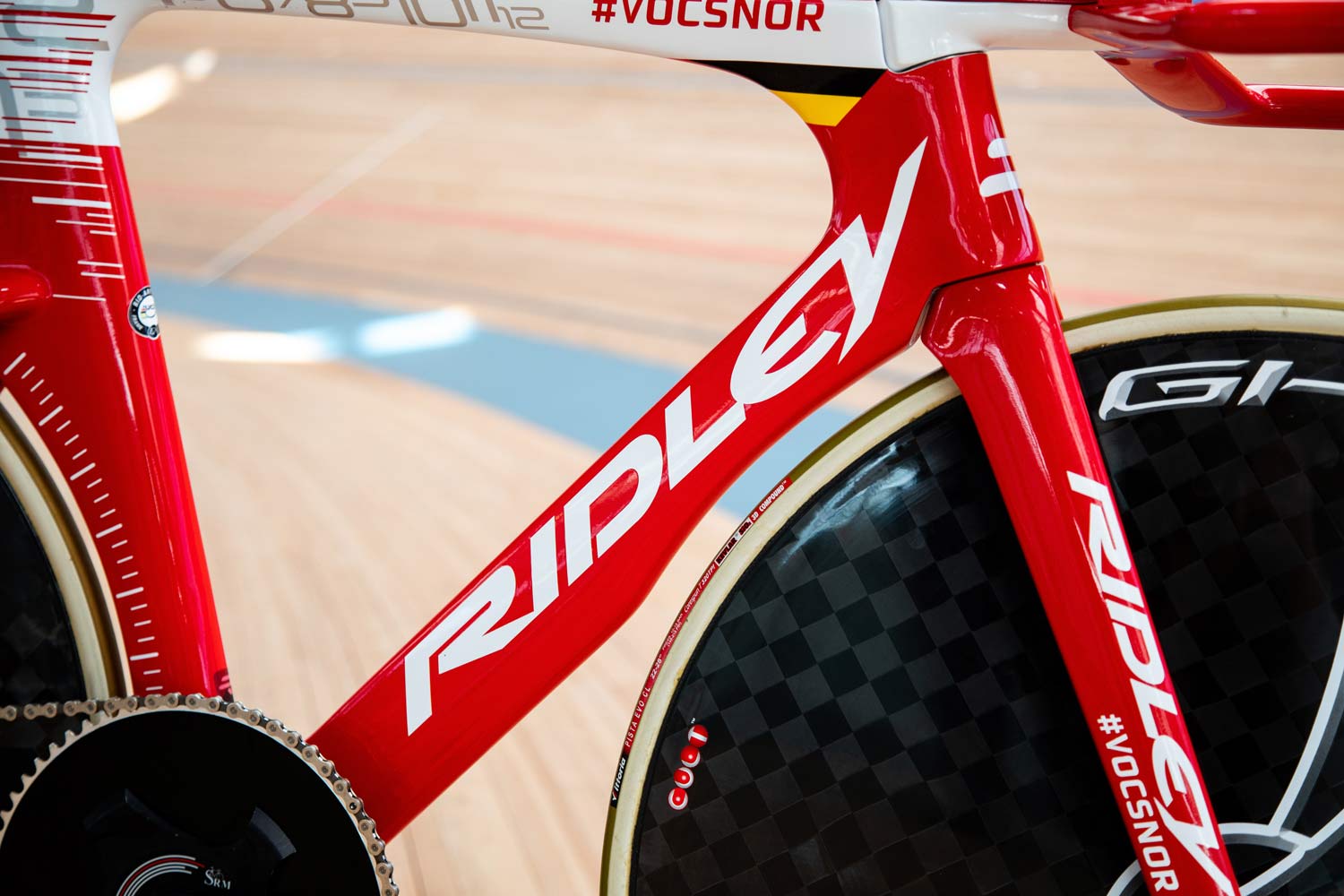 Campagnolo Ghibli carbon disc wheels keep air slipping by smoothly and spin with Campy’s top level CULT ceramic bearings in the hubs according to decals on the wheels. 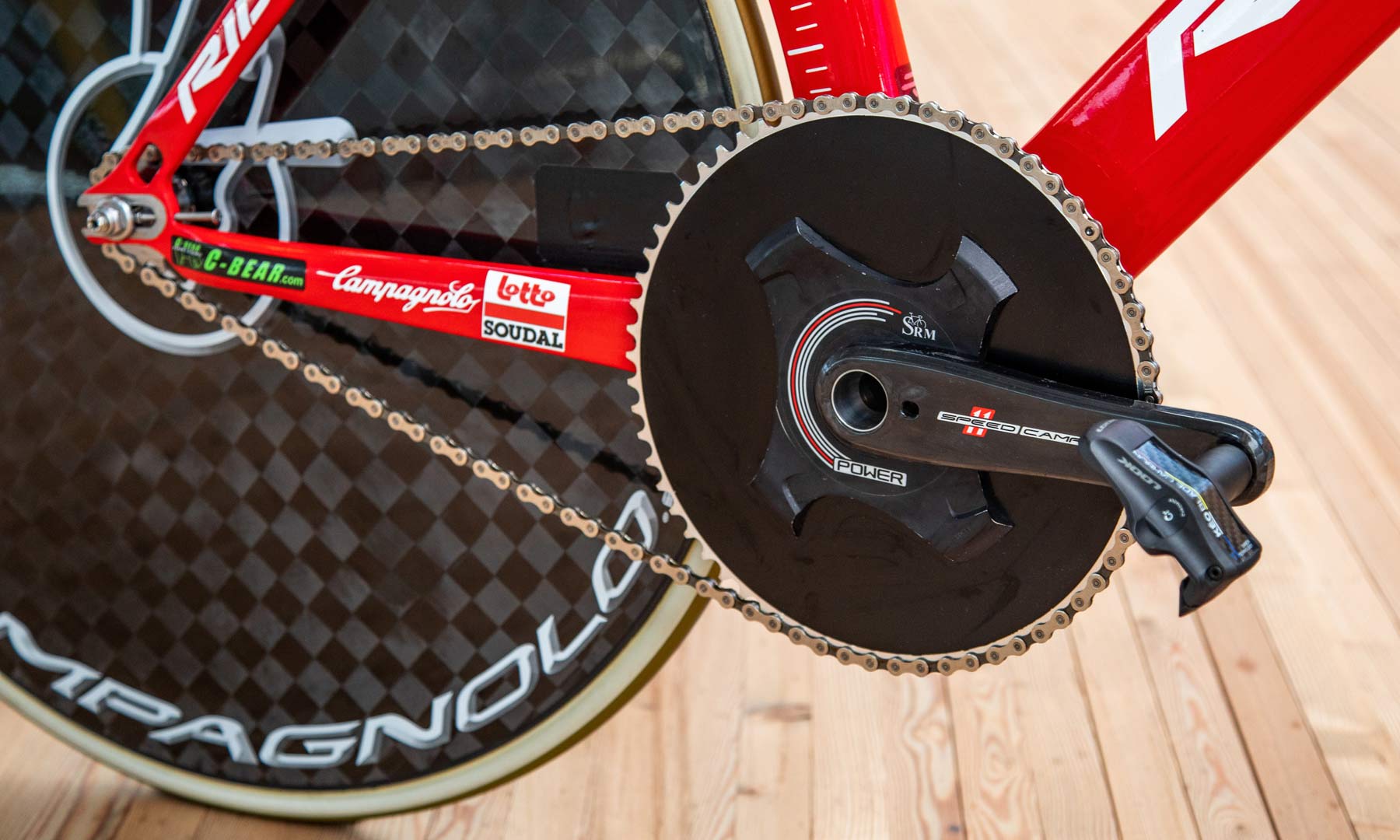 Drivetrain is by Campagnolo as well, with an 11-speed chain and custom chainrings on a Campy SRM power meter crankset. Of course, Campenaerts wasn’t allowed to monitor his power output during the record attempt, as the Hour Record regulations require riders to base their performance on feel and the visual feedback their pit team can provide. But certainly he has been training with power, and it would not make sense to risk making changes to the bike just for the record run.

Campenaerts was cagey going into his Hour Record attempt as to what gearing he would run, suggesting a 63×15 setup for 8.70 meters with each crank rotation. But in the end it looked like his record setting bike had a 61×14 setup instead, for quite a bit larger 9.04m per rotation, which works out to an average 101.5rpm cadence over his effort.

While the wheels bear Campy CULT bearing decals, C-Bear is also a sponsor, so maybe they supplied the ceramic bottom bracket bearings, or upgraded pedal bearings since the Look Keo Blade Carbon pedals don’t have the labels of the latest Look ceramic bearing version? 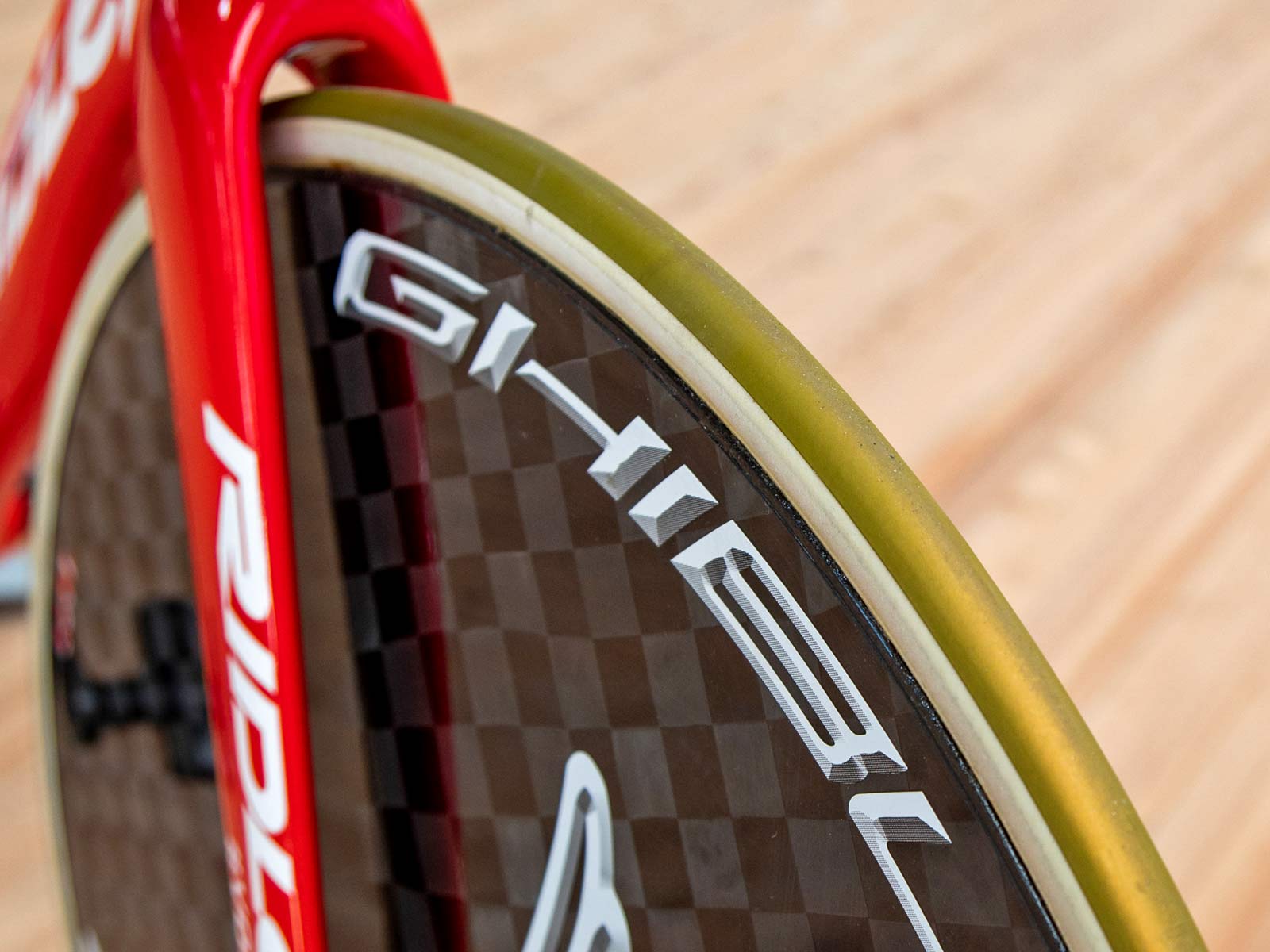 Probably the last standout on his bike are some slick gold Vittoria Pista tubulars. Vittoria apparently developed them specifically for ultra low rolling resistance on the wooden track. The 22mm wide tubulars still bear a previous generation hot stamp labelling them as Pista Evo CL Corespun T 320tpi tires with Kevlar SiO2 3D Compound rubber. Maybe they have been hanging in a special closet somewhere, aging & waiting for their chance to race? 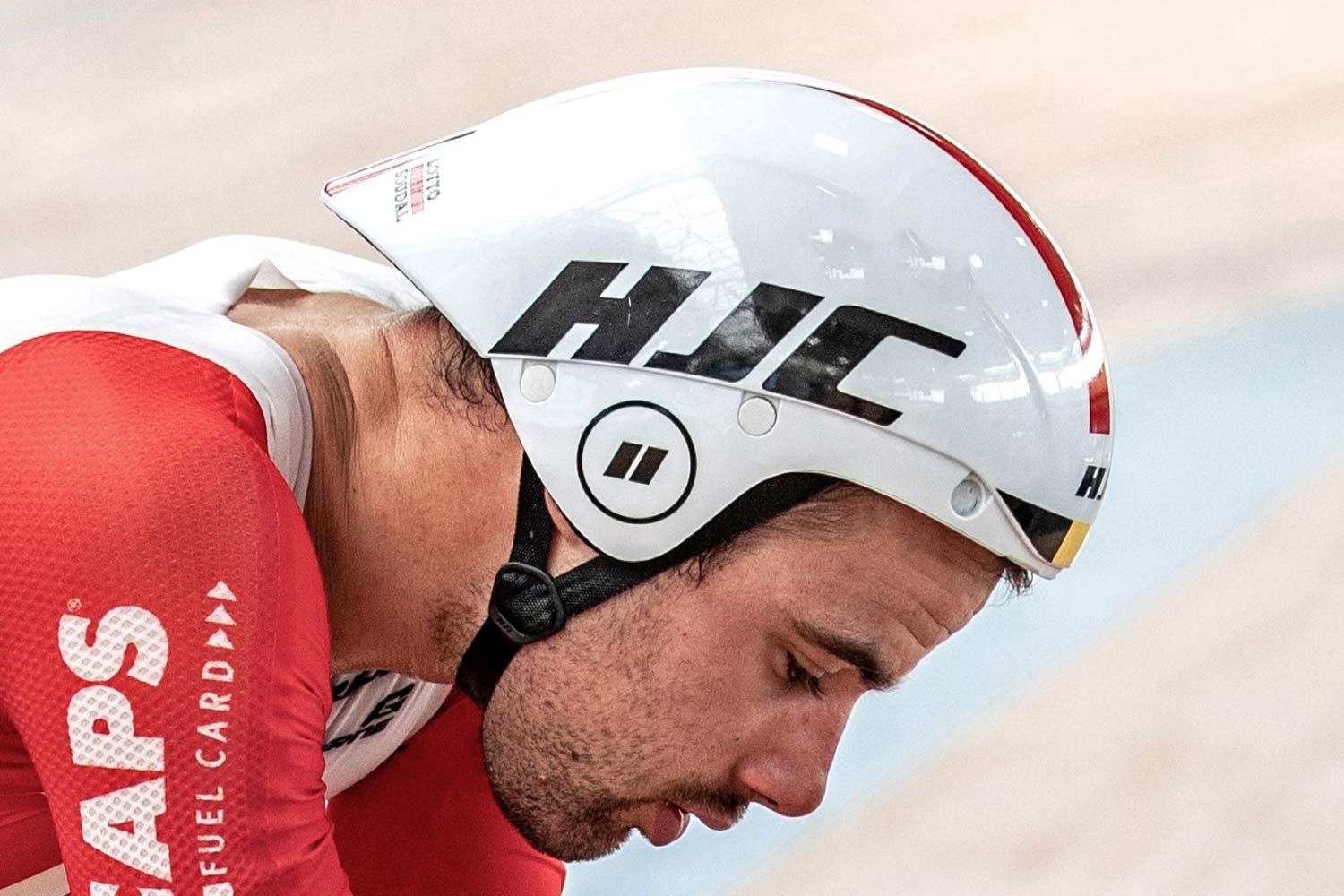 It’s not just the bike that gets tricked out for the Hour Record, but Campenaerts raced in a slightly modified HJC Adwatt aero helmet as well. Apparently his head shape required a customized fit to the otherwise standard helmet, but he also rides without the helmet’s integrated visor. Testing revealed that he (unlike some of his teammates) is actually faster without the vistor, plus he gets the added benefit of increased cooling.

His shortsleeve skinsuit by Vermarc is important in the aero battle too, but it is the same one he races TTs in, just minus his current EU champ stripes. 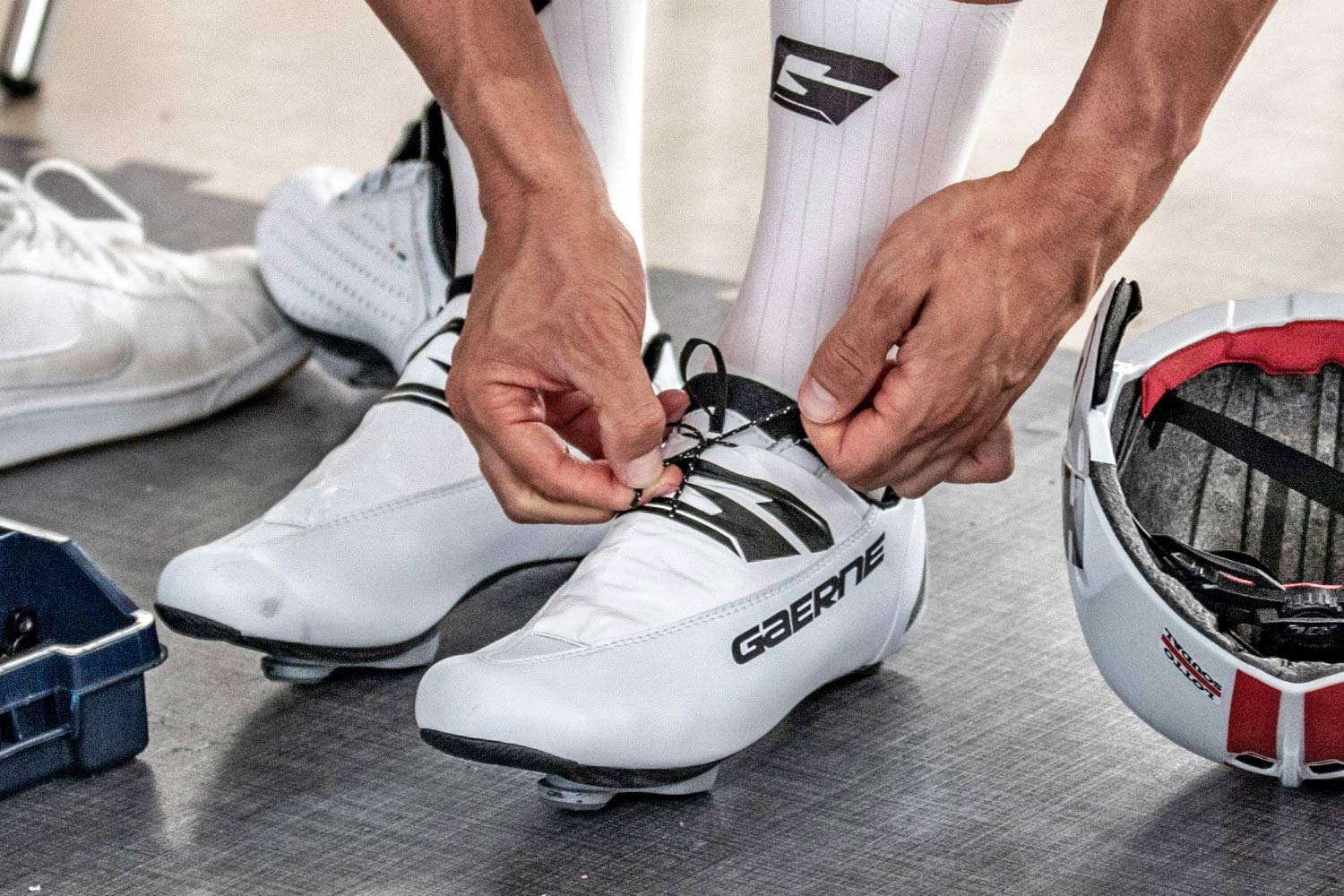 Now those shoes, they are something we haven’t seen before. Shoe covers aren’t allowed in the Hour, so Gaerne developed a new lace-up shoe with an integrated rubber top that hides the laces. They even say that they are faster than their standard Boa dial shoes with aero covers on top, and get aero socks to match.

Developed on the same form as their top G.Stilo road shoes, these new prototype aero road shoes eliminate the perforations from the front of the upper, but otherwise share the same stiff carbon-soled construction. Campenaerts is happy with the aero shoes, having already won a stage of Tirreno wearing them. So we expect to see him continue racing in the shoes, and probably an official release from Gaerne in the near future. 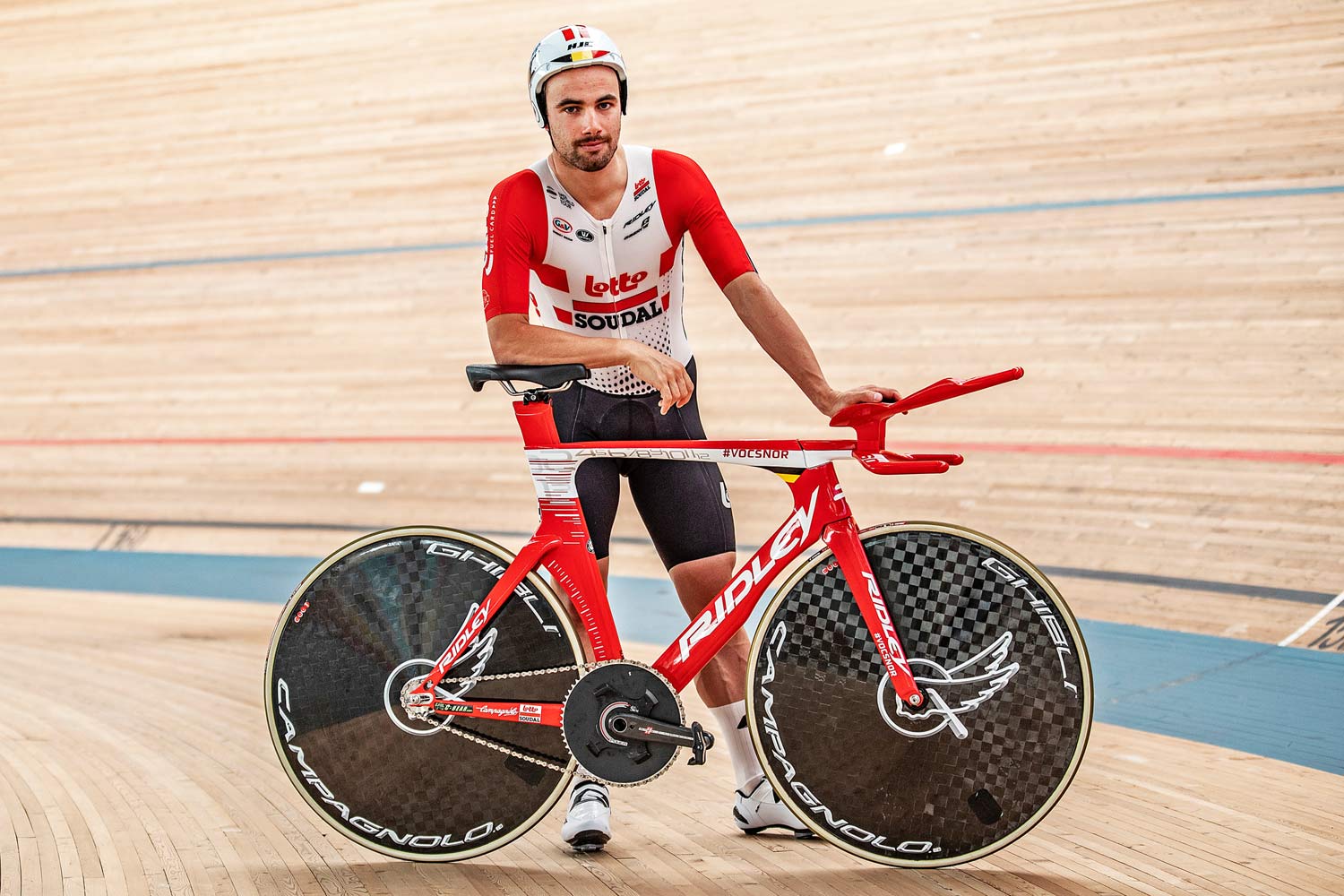 All together a custom bike, custom bar, custom gearing, customized helmet & prototype shoes worked together to set the stage for Victor Campenaerts to set his new Hour Record at 55.089km.

If you want to find out more about his path to Mexico, including wind tunnel testing, dialing in his TT position flexibility, and training in Nambia of all places, Ridley has been tracking his progress with an interesting blog.

Anyone can ride Shimano. World Record holders are on Campagnolo…..

nobody-nowhere talks about his crank length. any idea?

Any idea who makes the rear cog? If running 11speed chain then a 3/32″ cog too wide. Even worse if using a 12speed chain right?