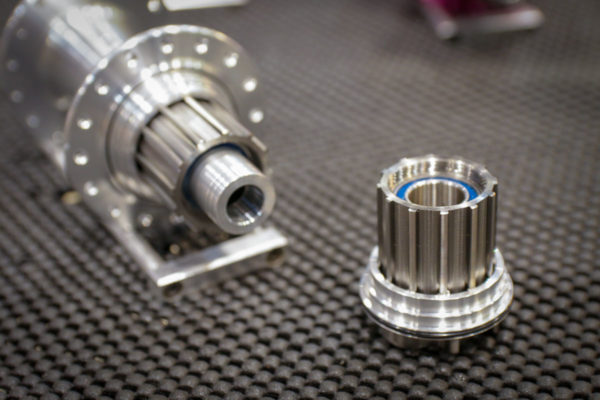 The new Shimano XTR isn’t even available yet, but already people are making plans for their hubs. The reason? A new freehub body design that is required for the XTR cassette called Micro Spline. At the time of the initial launch, Shimano was offering their own hubs with compatible freehub bodies, and they had worked out a deal with DT Swiss to allow them to produce their own as well. 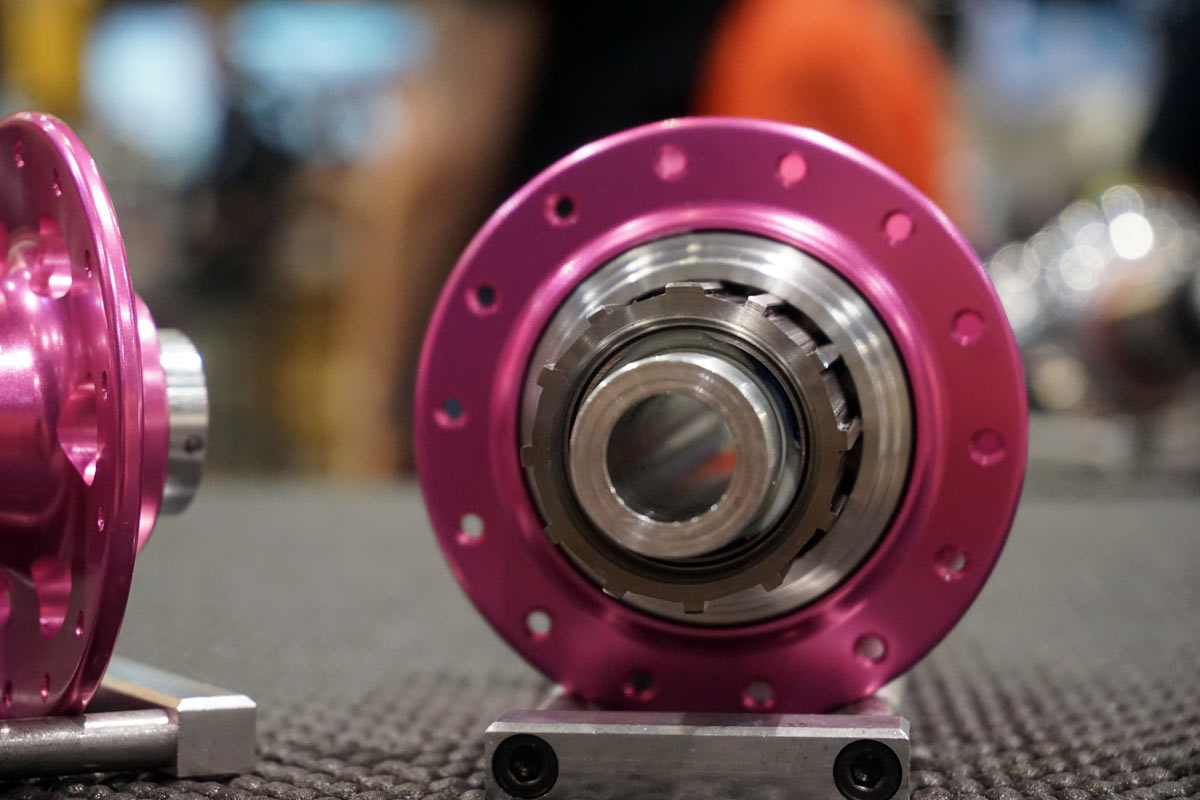 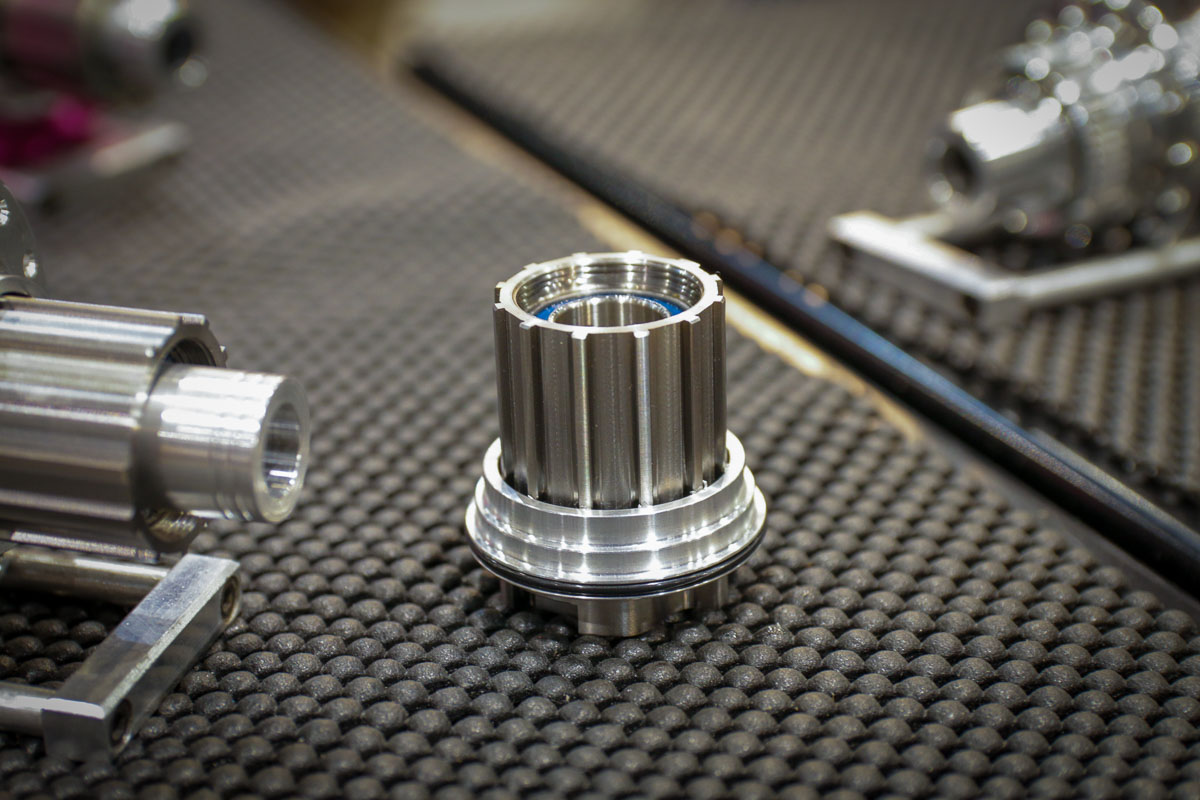 But that leaves a lot of hub companies out in the cold trying to figure out how to allow their hubs to be used with the new cassettes. Without a deal from Shimano, there aren’t many options… unless you play with the number of splines on the freehub body. Since White Industries makes their freehub bodies out of titanium, they were able to go from 22 splines of the Shimano hub, to just 12 splines which supposedly allows them to get away with the design. 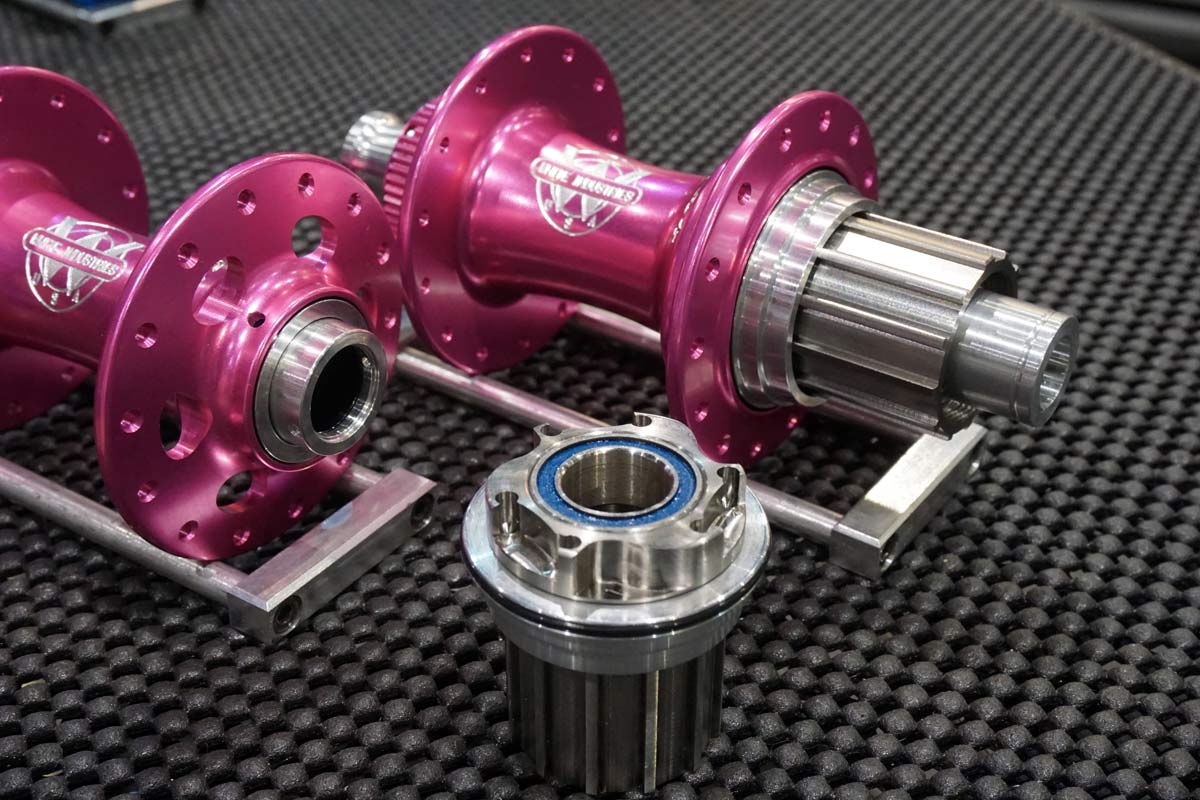 The freehubs will uses the same pawl and ratchet kit as other White Industries hubs, and will be backwards compatible to their hubs for about the past 20 years. The freehubs will include a required axle kit, and should be available around the time that XTR hits the market. 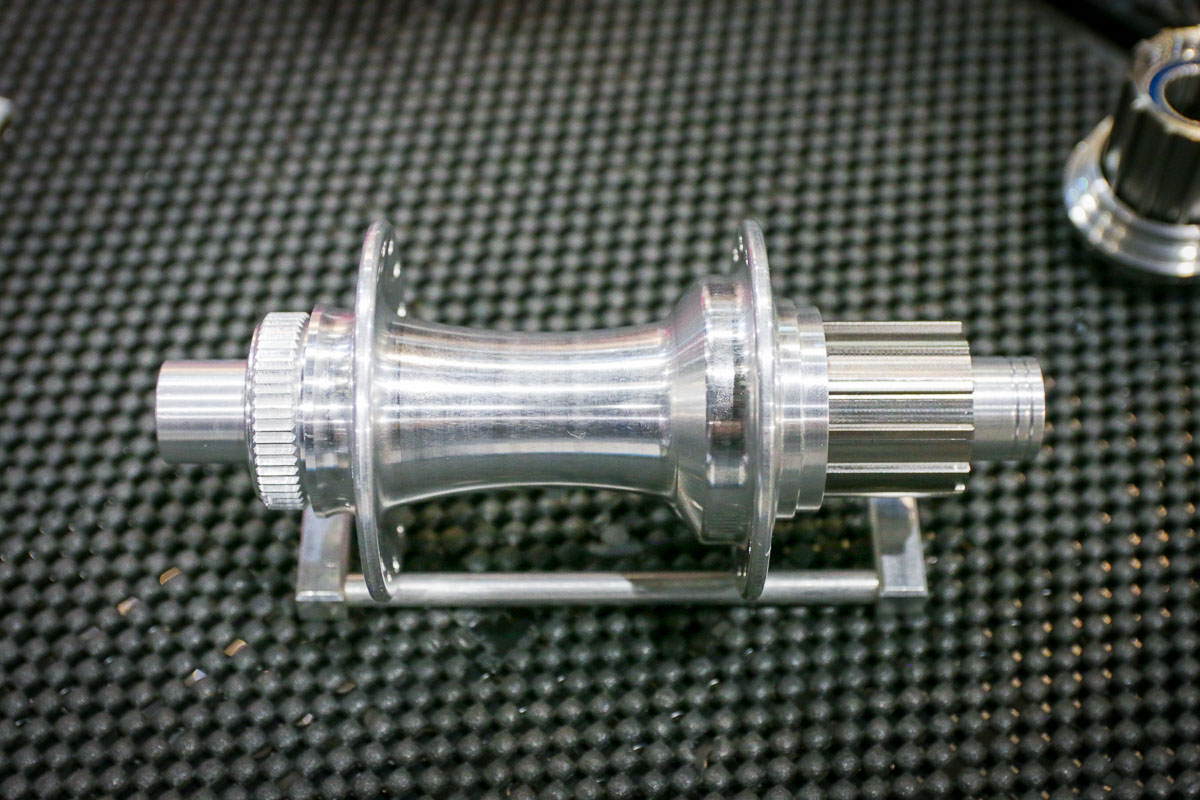 Another new standard that White Industries has in their sights, this raw hub is a prototype of things to come. Specifically, a Super Boost + (or just Super Boost, same thing) 157 x 12mm hub to fit modern bikes with the wider rear hub spacing. The hub will use their 3 pawl, 48t engagement system with Centerlock brakes only, and will be offered in 28, 32, or 36h options. White Industries will have more information on prices, colors, and availability soon, though expect it about the start of, or early next year. 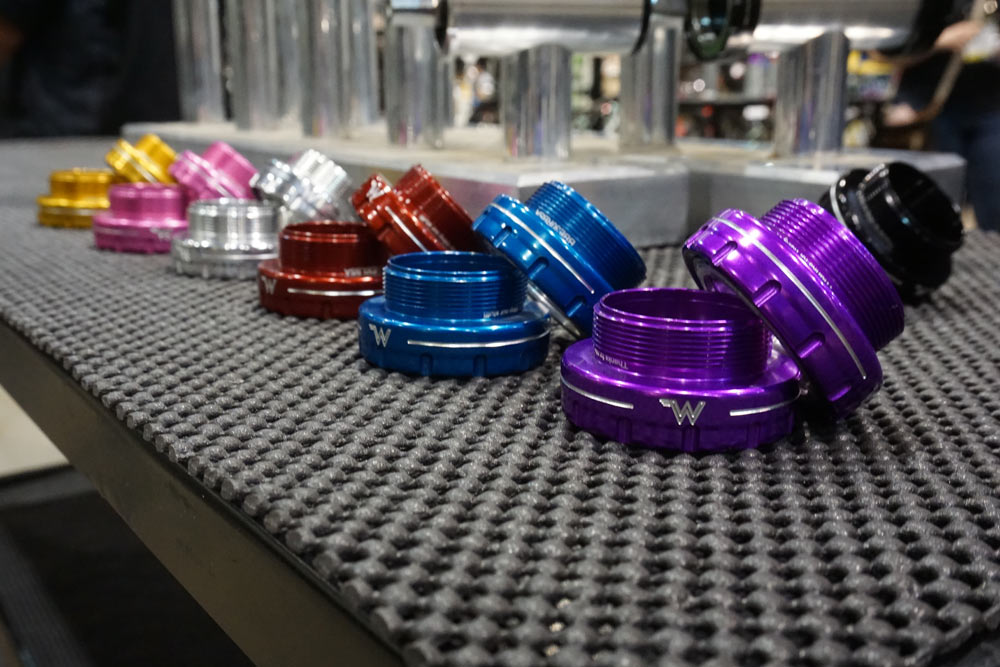 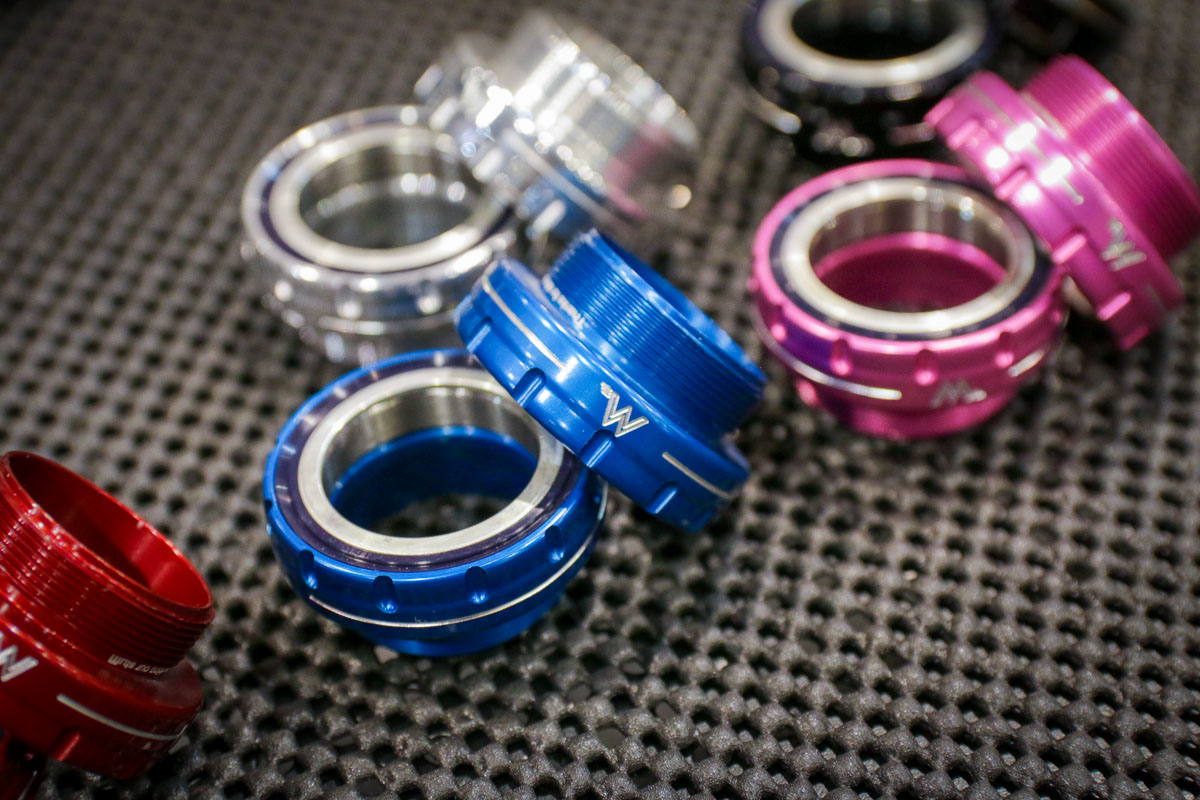 Finally, White Industries will soon be offering colored versions of their BSA 30 threaded bottom brackets. Originally just available in silver, they will now come in black, yellow, blue, red, pink, and purple. Silver BBs will start at $120, black bumps up to $127, and the other colors will come in at $140, and all will be available next month.

I love innovation – but I love a simpler time when hubs were 135mm- bike shops made money and you stood when the president walked in. “ it was Super boost 157 commander, 3 to beam up”

Simpler times weren’t as good. They might’ve been less confusing, but things are better now. 135 worked OK with 26″ wheels, but made for really weak 29er wheels. So you want to give up your big wheels? Or just deal with weak wheels? It’s like my dad, bitching about fuel injection because he used to be able to tune a carburetor in the garage.

So true! Funny thing is, now most mechanics don’t want to touch carberators because they are a hassle compared to f.i.

135mm hubs are still fine in select scenarios, sure, i’ll warrant that.

I warm up on 20-30 foot gaps. When I’m going balls-out and firing on all cylinders I’m launching 40-60 footers, hitting drops (small cliffs to some) at 40 mph and have to look out of state to ride my favorite 8,000 foot mountains.

As a matter of fact my insurance policy states that if I ride less than 148 Boost rear hub it won’t payout if I “eat it”.

I’m still having a hard time faulting the 135mm hub for weak 29″ wheels. It was more likely the asinine 400 gram 21mm wide rims we were lacing those war pigs to in combination with how clumsy we all were. Strength is the sum of a plethora of variables.a Anyone remember Sanjay who use to boost bigger steeper lippier jumps than what most of us would dream of on an old schwinn letour? Stop blaming the bikes for how talented you are! You can do this!

Super boost +? Is this different then Super Boost? If so someone needs to fire their naming department. People on forums can’t figure out what spacing they have now.

No, it’s not different. Just Pivot’s actual tongue-in-cheek name for a 157mm hub with flange spacing consistent with the Boost148 standard.

This will just be a repeat of SRAM’s XD driver introduction. “It’ll only come on these couple hubs”…”oops, we didn’t realize people might want to buy our stuff”…give it a year and they’ll likely cave. If they can’t bring most of the 12 speed benefits to an HG body, their 12 speed will be doomed. This needs to hit SLX and Deore level ASAP, because SRAM is KILLING THEM with current GX/NX groups. Riders have no Shimano options to compete.

I’m pretty sure you would need a new frame design to clear the chain if the HG locking ring were also the 10t cog. That’s exactly what XD is… Just a shortened HG so that the lockring can be inboard enough to clear the frame. (I think. Haven’t spent that much quality time with an XD freehub.)

Paul is right on the money- But if we went back to a 7spd freehub it would certainly give enough room for a 10- or 9- tooth cog to nest in and clear the frame. Shimano Has already figured out a way to fit a 9 tooth cog, check out the Capreo group for folding bikes. Or, drumroll… design a new freewheel!

The only reason the few Micro Spline cassettes are so expensive is because they’re as of yet limited to XTR level. It’s easy to see versions below $100, once it reaches SLX.

As for your lockring/sprocket idea, they already did that with their IG Dura-Ace cassettes. It’s a nice idea, but the problem is removing that sprocket can be difficult, since pedaling forces tighten it, and tooth wear wont help.

You mean like pre-hyperglide when the outer cog was threaded on to the outside of the cassette body? But now thread it on the inside.

Besides not having the hyperglide ramps work on that first cog, I’m not sure the threads on the inside of the cassette body can take the torque, especially when usually only a few threads are engaged. And yeah, you’d need a slightly shorter cassette body and various different spacers.

SunRace make a 10-50t 12 speed cassette and a 10-42t 11 speed cassette but the freehub is a slightly modified standard design. There’s no restriction on people using the design but only Sunrace make a hub using it at the moment. I have seen a Novatec hub which uses it and apparently DT has one too. There was one at Sea Otter but the only pictures of it were taken down off a website very quickly. It looks like Box will be using this design too.

So Ti alloy has a Vickers hardness around 3 times that of billet aluminium so it’ll will wear a lot better on that free hub. But that still is a fairly small bit of material to support a load considering what my old alloy freehub looks like after a sram cassette has a old good gnaw on it. Maybe better off with tool steel in this application?

Best off using Shimano XT cassettes, SRAM are notorious freehub chewers and always have been

For other peoples’ benefit, the whole point of Shimano going to more splines was to spread the load out over a larger surface area so the cogs wouldn’t dig into them so much.

White’s efforts to get around potential patent issues by using fewer splines just puts them back where they were with the current style of cassette body.

It’s not so much of a problem with steel cassette bodies (or at least steel spline faces), but softer aluminum (and potentially titanium) can get quite deformed by the cogs. This is not so much of a problem with cog spiders that spread the load over more of the spline, but individual cogs are worse, especially if they’re thinner, such as when going from 11 to 12 speed.

15 years servicing White Ind. hubs and I have never seen a cassette chew into their freehub body. That doesn’t mean the micro spline design won’t but I am willing to give them the benefit of the doubt.

My question is of spline profile. New microspline looks to have trapezoidal shaped splines and this looks to have a more box section profile. Is that the case?

The XD Design is far superior to this from an engineering standpoint. All the microspline patter will do is mitigate “some” of the notching that occurs with the high-torque application. My bet is that an AL version of this freehub will still notch. Can a microspline freehub be machined out of aluminum and still perform to shimano specs? Let’s face it…. Shimano never made AL freehub bodies because of this inherent design problem.

The XD design is OK for the spline interface, but building a cassette that can transfer all of the force from the highest gear all the way to the lowest is expensive, requires a bajillion pins, or both.

SRAM painted themselves into a corner with XD for sure. Microspilne does a better job at anticipating and facilitating lower cost cassettes

SRAM XG-1295 cassettes retail for $215 MSRP. Currently the only Microspline cassettes that exist are 3 times more as XTR level. When Shimano makes a 12sp Deore Microspline for less than $190-ish, then we’ll talk.

Also, who doesn’t like a cassette that stays in one piece when you take it off the bike?

When Shimano makes a 12-speed Deore level Microspline cassette it will probably be ~$45-55.

SRAM Eagle XX1 cassettes retail for $449, XTR 9100 cassettes will retail for at most $379. Even with a super low end cassette on a White Ind. Freehub there is almost no visible marking, let alone when using a high end XTR. This new freehub will only be better and leaves the design open for usage of low end Deore level cassettes at cheap prices in a few years. I like SRAM stuff a lot, but they tend to design stuff without thinking too far ahead. Shimano designs everything with the idea of trickling the tech down in the future.