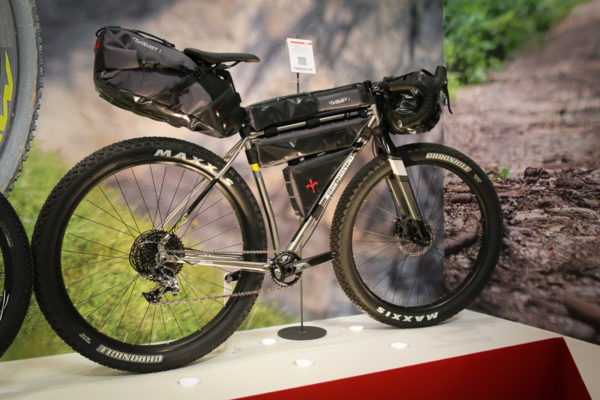 Wilier Triestina is probably still best known for their beautiful road bikes, but that may be about to change. Internationally, the storied Italian brand has already been selling bikes other than road for some time. But for 2017, both their international and U.S. markets will gain a number of wild new bikes but not everything will be coming stateside. One of the bikes that will make it here for fairly obvious reasons is the new Jaroon Plus. Filed under ‘Gravel’ the Jaroon Plus builds on their skinnier platform and includes 29+ wheels and tires (3.0″) with a double butted chromoly frame and drop bars for the ultimate kill-all-gravel set up… 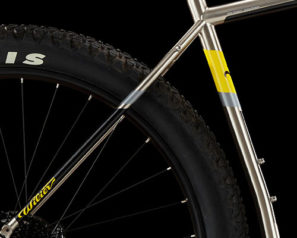 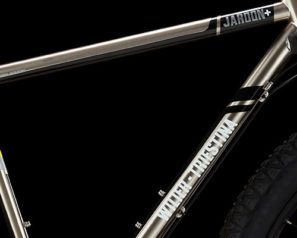 Ok, calling it a gravel bike might be a stretch, but the Jaroon Plus should be able to go anywhere. In addition to the massive tire clearance the frame has an interesting touch that Wilier is referring to as internal welding. It was hard to notice under all of those bags, but the frame’s joints are very clean and don’t feature the typical look of welds we’re used to seeing. 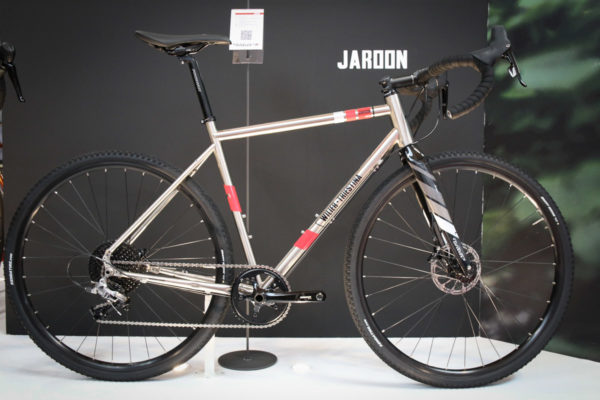 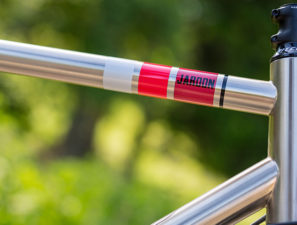 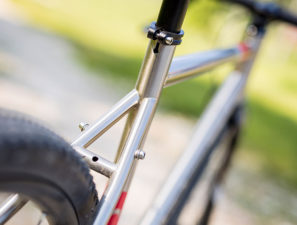 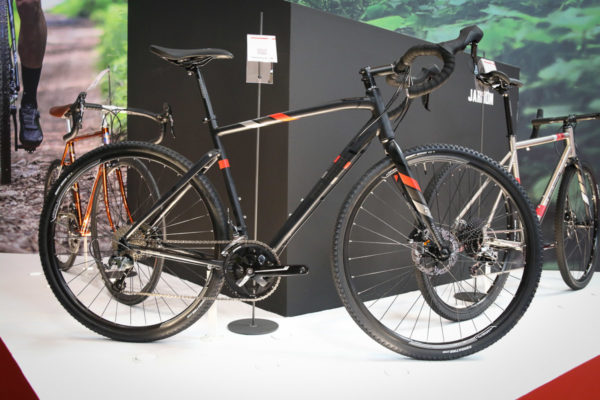 If the massive 3.0s aren’t your style, gravel goodness will also be offered in the steel Jaroon and aluminum Jareen gravel bikes. The Jaroon features the same frame technology as the Jaroon Plus, but is limited to 42mm tire widths. The same can be said for the 6061 double butted aluminum Jareen with 42mm tire clearance and thru axles front and rear. Pricing starts at $1525 for the Shimano 105 mix Jareen and $2549 for the 105 11 speed Jaroon. 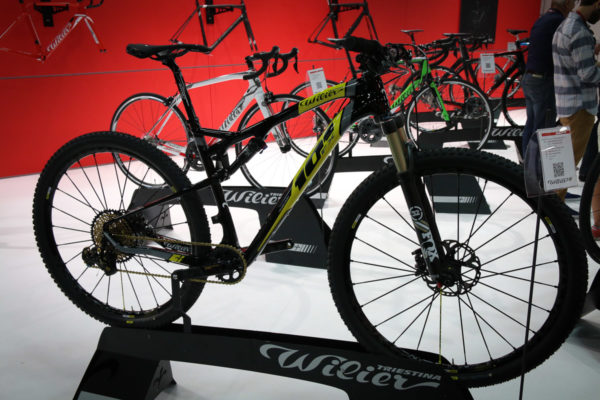 There are a number of additions to the mountain bike lines but this 101FX was prominently displayed at Interbike. The 100mm travel XC bike uses a 60 ton monocoque carbon frame seems to be geared towards new school XC racing which includes more technical terrain. Offered in something like 22 different variants, this SRAM Eagle XX1 equipped bike apparently has a retail price of only $6499. 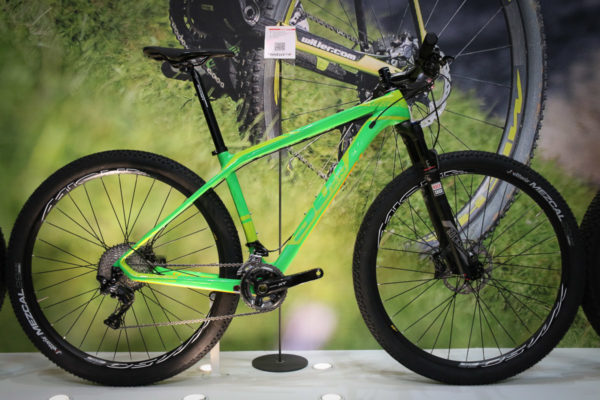 The 501XN is another new addition to the mountain bike line that Wilier is considering an entry level carbon hard tail. Starting at €1898, the frame is still a monocoque carbon design but with 46 ton carbon. Offered in three builds, the bike will also be offered in a frame kit. 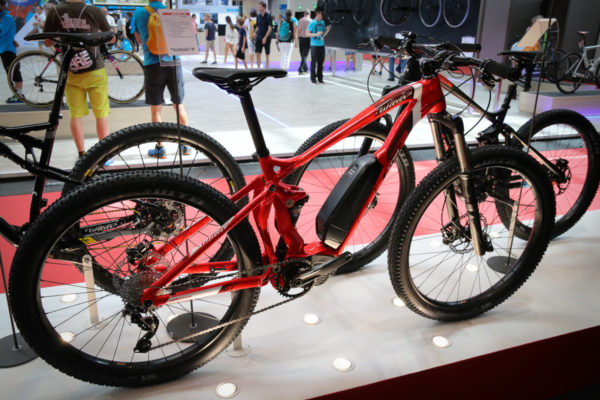 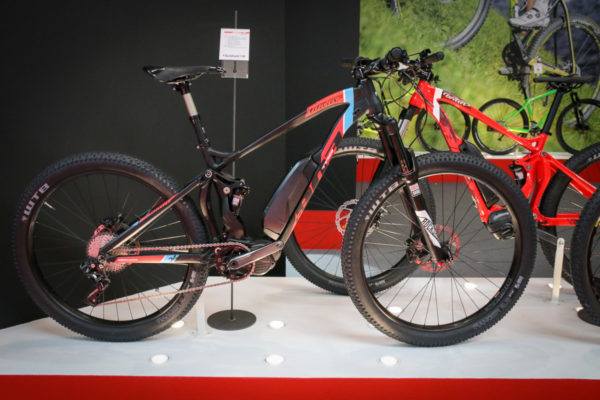 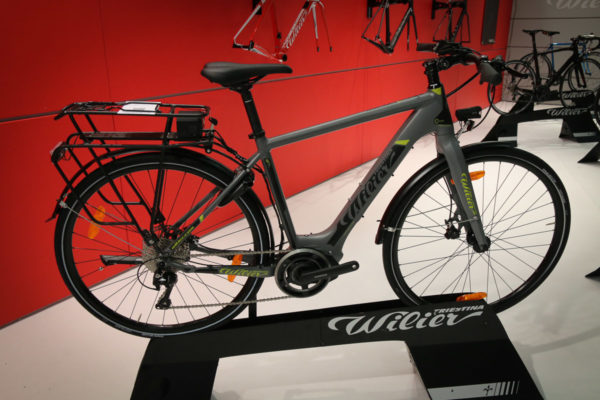 Depending on where you are in the world, Wilier will soon have more ebikes to offer as well. New this year are a few new e-mountain bikes with the E803TRB that includes the Shimano STEPS motor and battery and is built around 27+ wheels and tires starting at €4200. There will also be a hard tail version called the E803XB (from €3500), and the E803XN (from €4300). While not 100% new, the Refill and Magneto fill out the ebike line for commuters along with a few non-motorize variants.

Can anyone explain what “internal welding” is, thanks. 🙂

It’s a small robotic probe that welds from inside the tubing. Very impressive.

More likely to be laser weld by a robotic arm.

Peugeot used to do some steel bikes in the 80s that they said were internally welded/brazed (I forget which…).

I’m guessing this is similar? Interesting that in the intervening 30 yrs it’s not become more popular/widespread…..

Too bad that Wilier doesn’t sell the Jaroon as a frameset. That would be an awesome city bike with a Gates carbon drive and Alfine Di2.

Just going of the pics I don’t think the “internally welded” frames are welded at all. That looks a whole lot like internal brazing. It looks cool but isn’t as strong as a standard external filet.