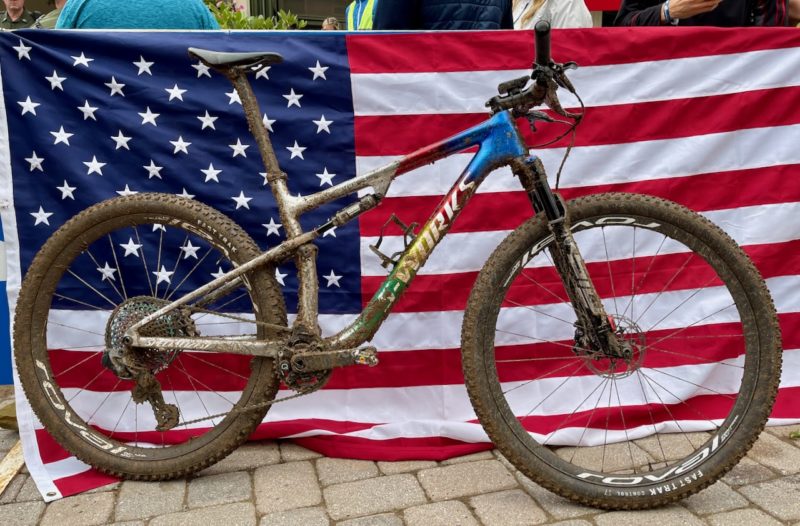 Racing a World Cup in the USA brings out the animal in Chris Blevins (Specialized Factory Racing). Last year the short track World champion rocketed to a beyond-convincing win in the Men’s Elite Olympic Cross County. 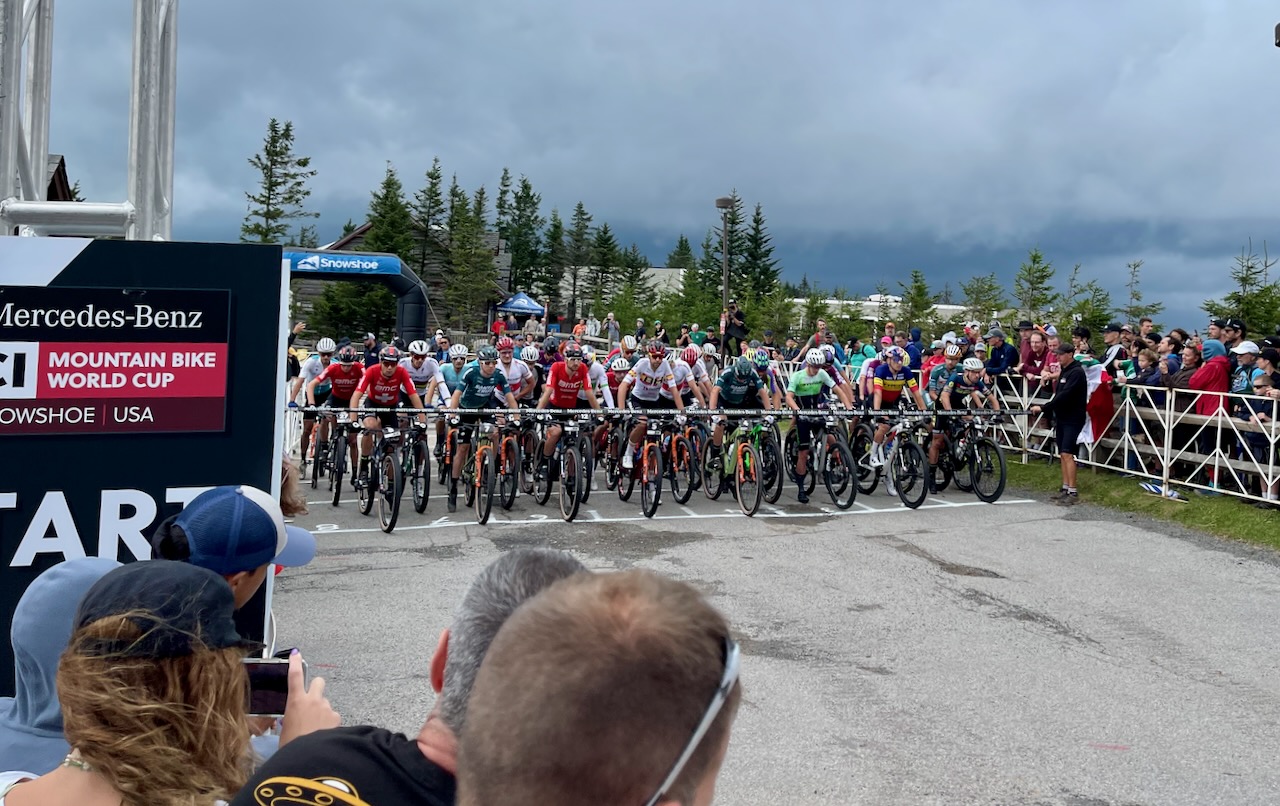 The race and key moves

Blevins was similarly calm but aggressive for the short track at the UCI Mountain Bike World Cup in Snowshoe. The World Champ played it cool and stayed with the lead group most of the race, avoiding a crash by current XCO World Champion Nino Schurter. 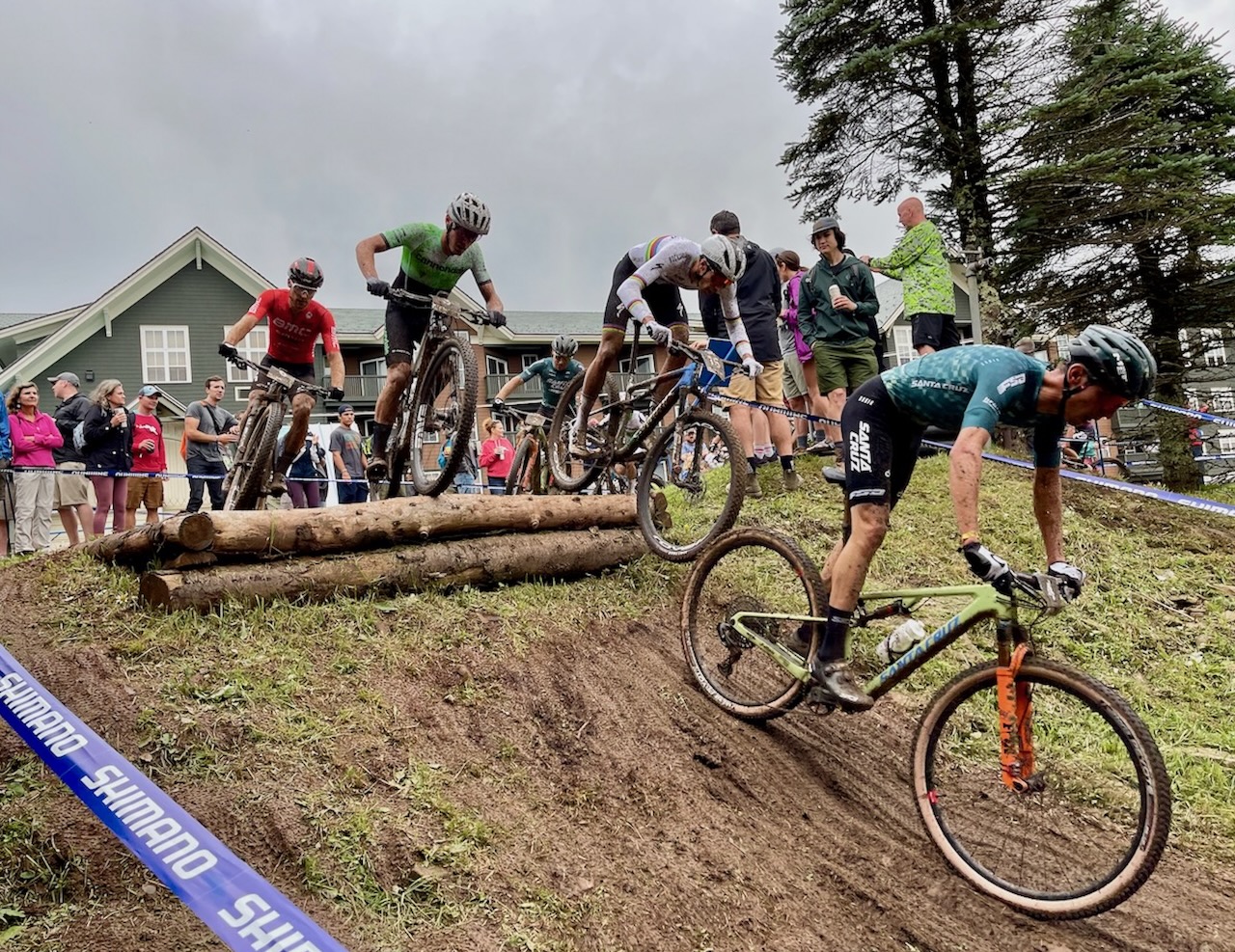 In the final lap, Belvins tactically moved from the fourth wheel to the third and used a heavy muddy sector of the trail to attack the group and move to the second wheel. 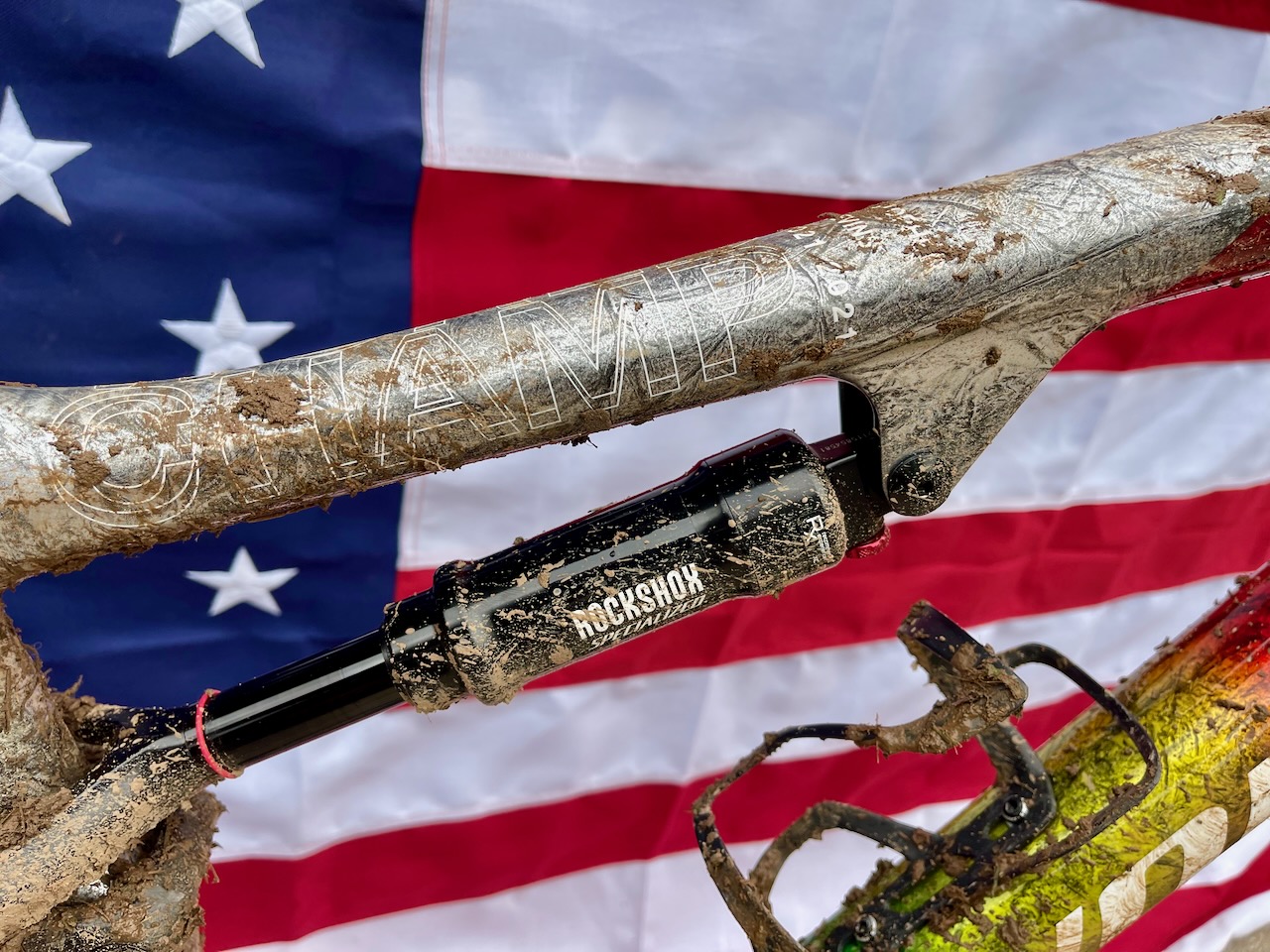 Cool, collected, and explosive, Blevins popped out from the draft of Vlad Dascalu and secured the second win for the USA of the short track weekend. The crowd erupted similarly to his win last year, but this time Blevins was adorned with the unmistakable rainbow stripes of the World Champion. 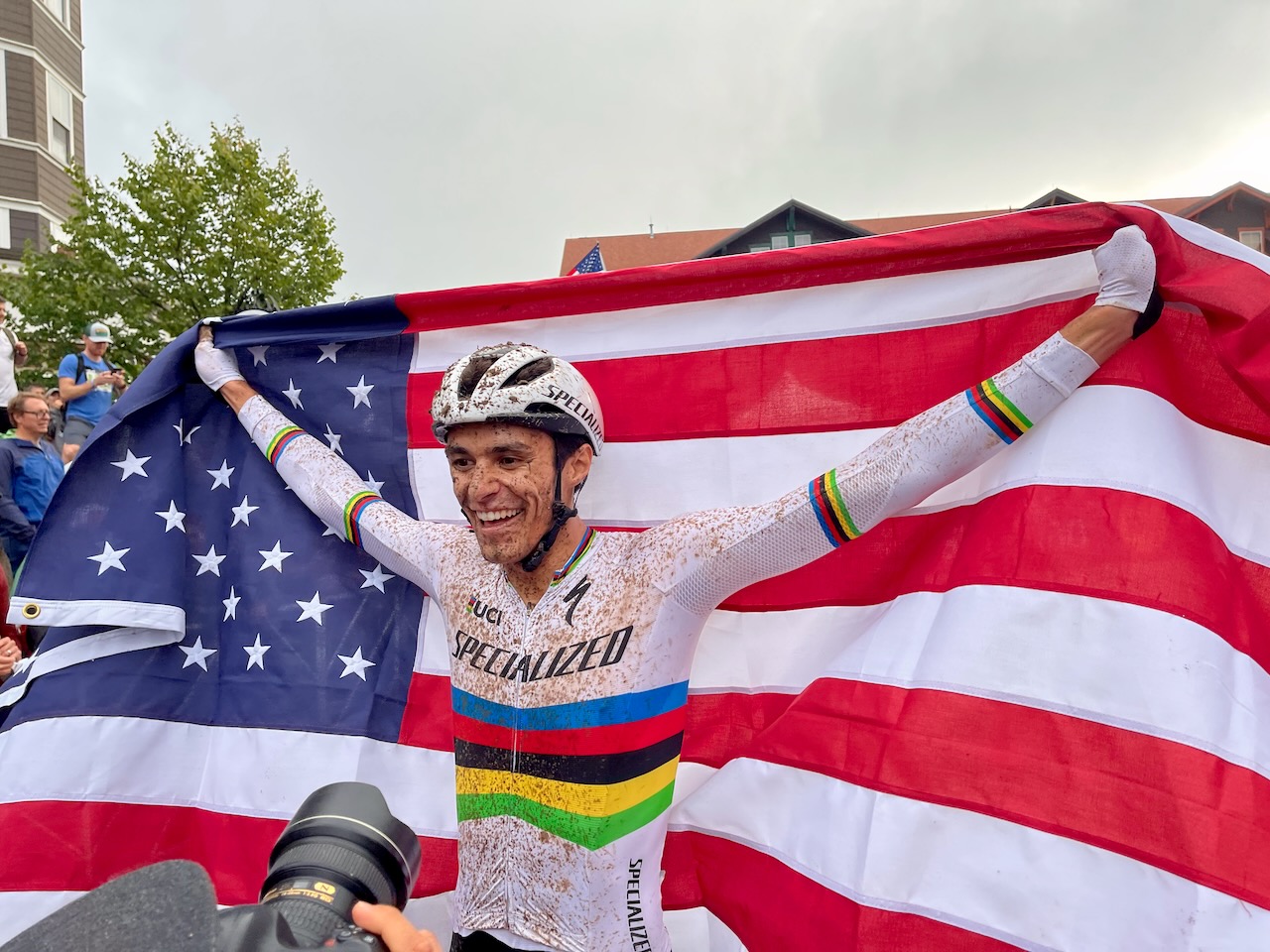 An Epic ride and Epic conditions

The course was muddy but tacking up by the time men toed the start line. Blevins opted for the S-Works Epic he claimed victory on last season but with some slight changes in tires and saddle. 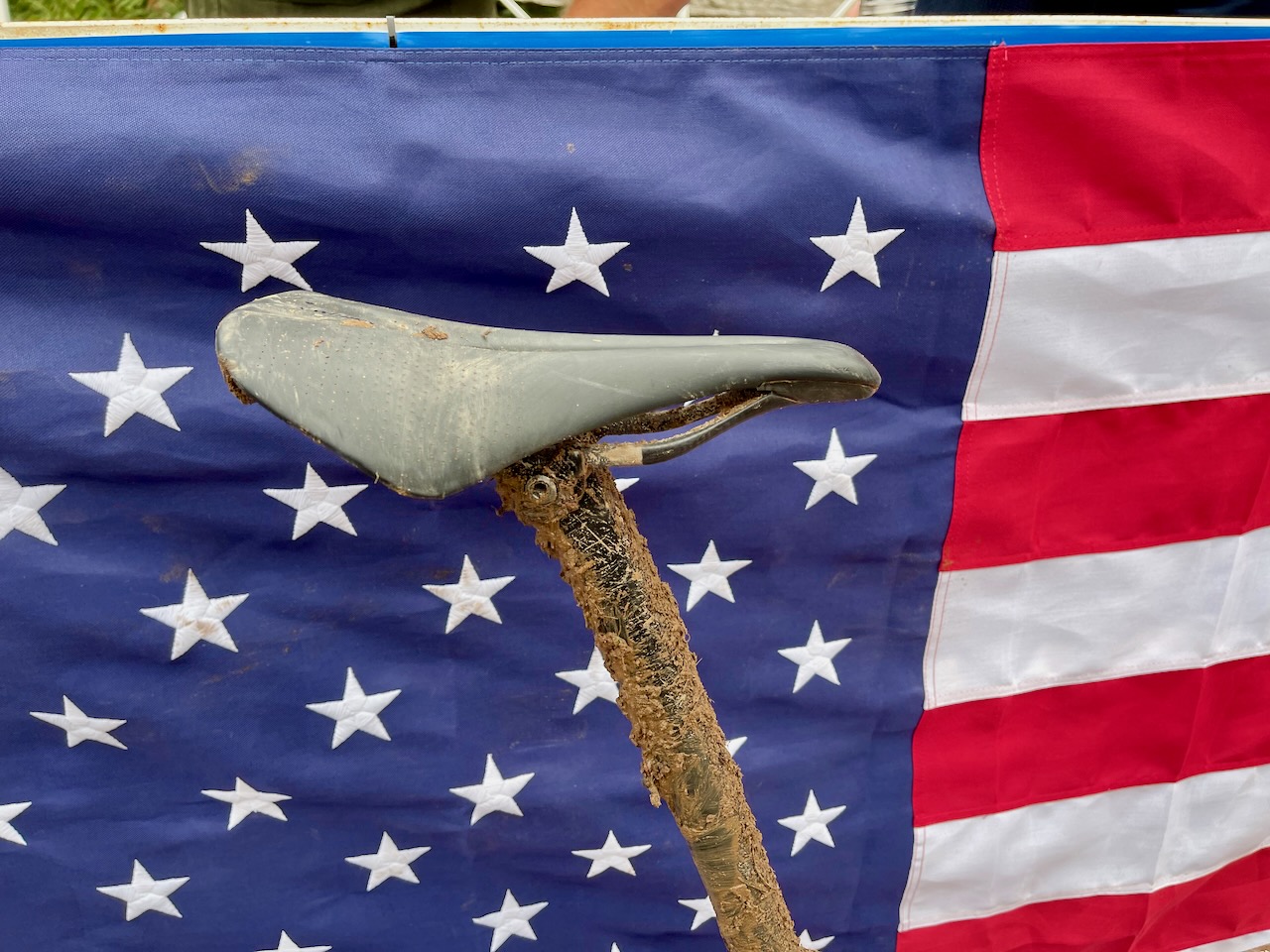 We saw some Specilided riders on course riding prototype Specialized Storm tires that look like a wider version of the Dugast Ernest but with broader side coverage. 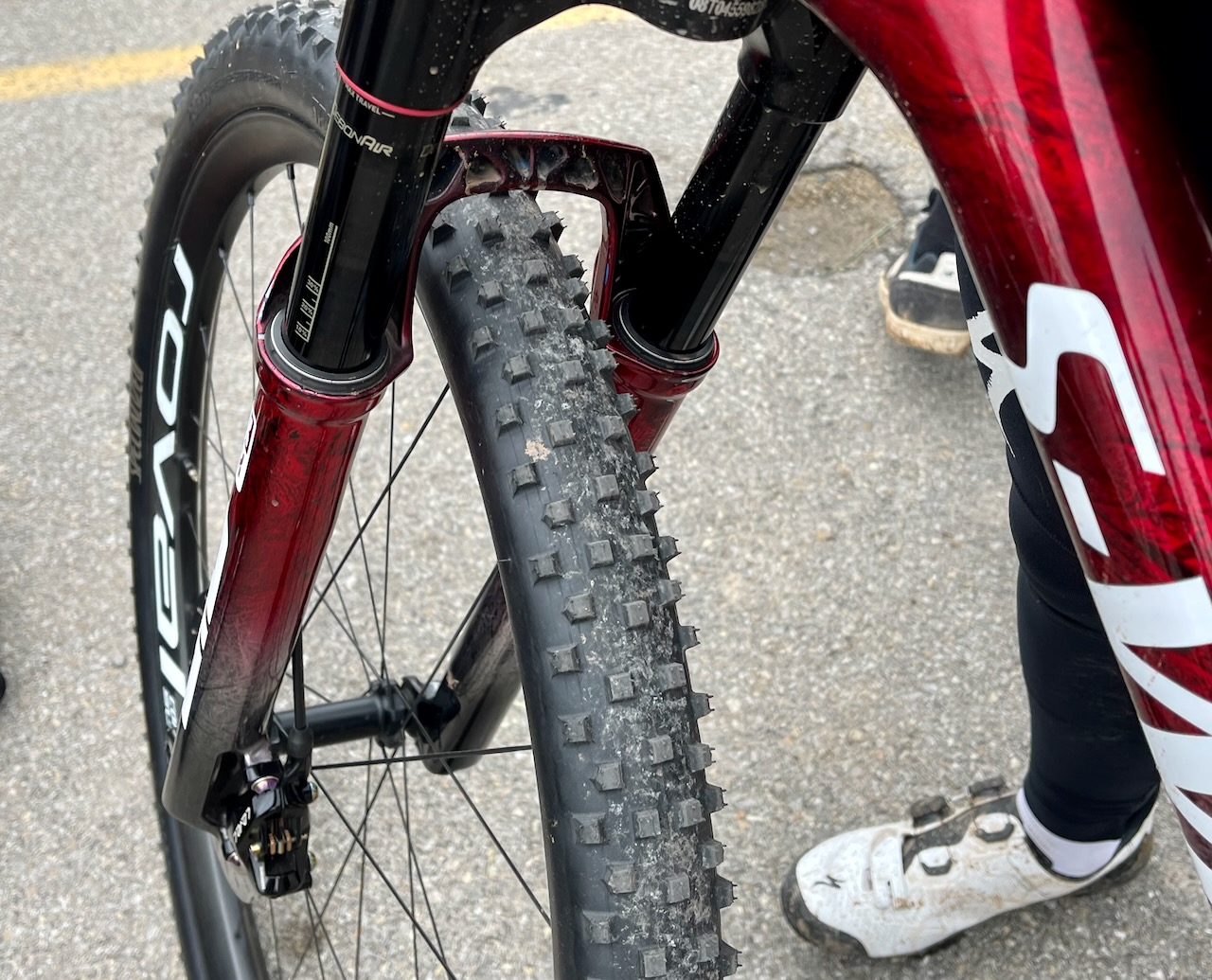 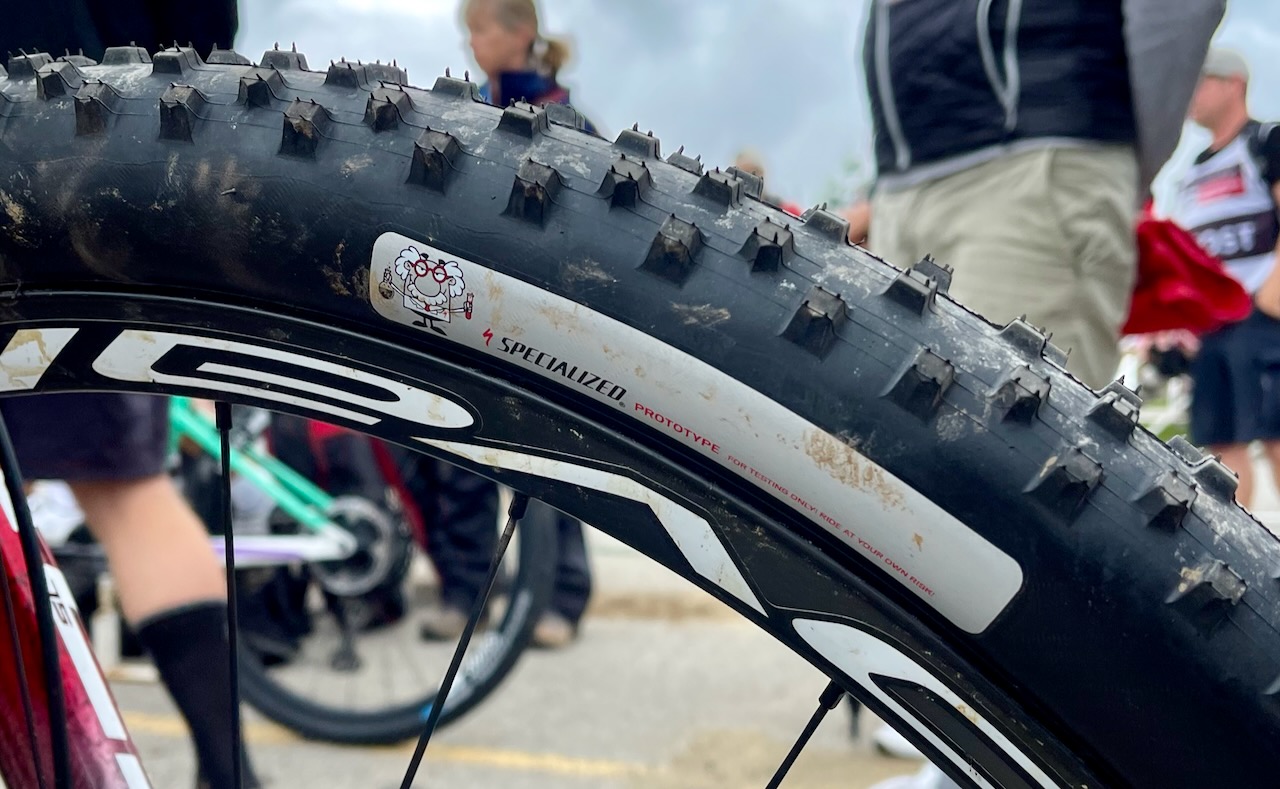 The 29 x 2.1 tire looked a good option for the women’s race but slightly overkill for the men’s conditions. 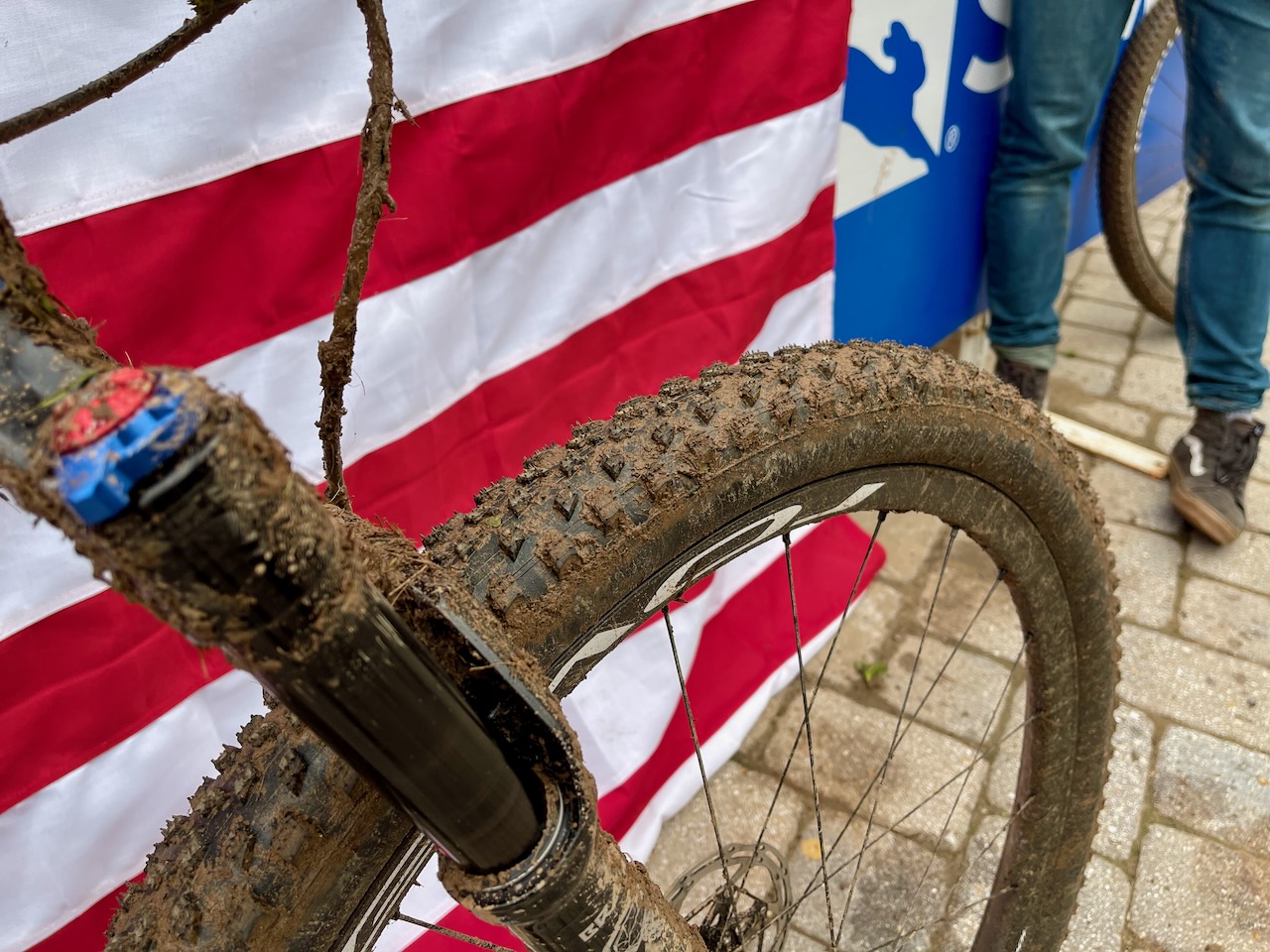 Belvins opted for the newer, more aggressive version of the Specialized Fast Track 2.3. The tires looked to have cleared mud and had enough bite to keep him slip-free on the attack through the heavier mud sectors.

His Specialized S-Works Epic is pretty much stock — we watched the mechanics build it for the race. The only difference is a custom-tuned Rock Shox Brain cartridge that the team gets with a slightly firmer lockout. 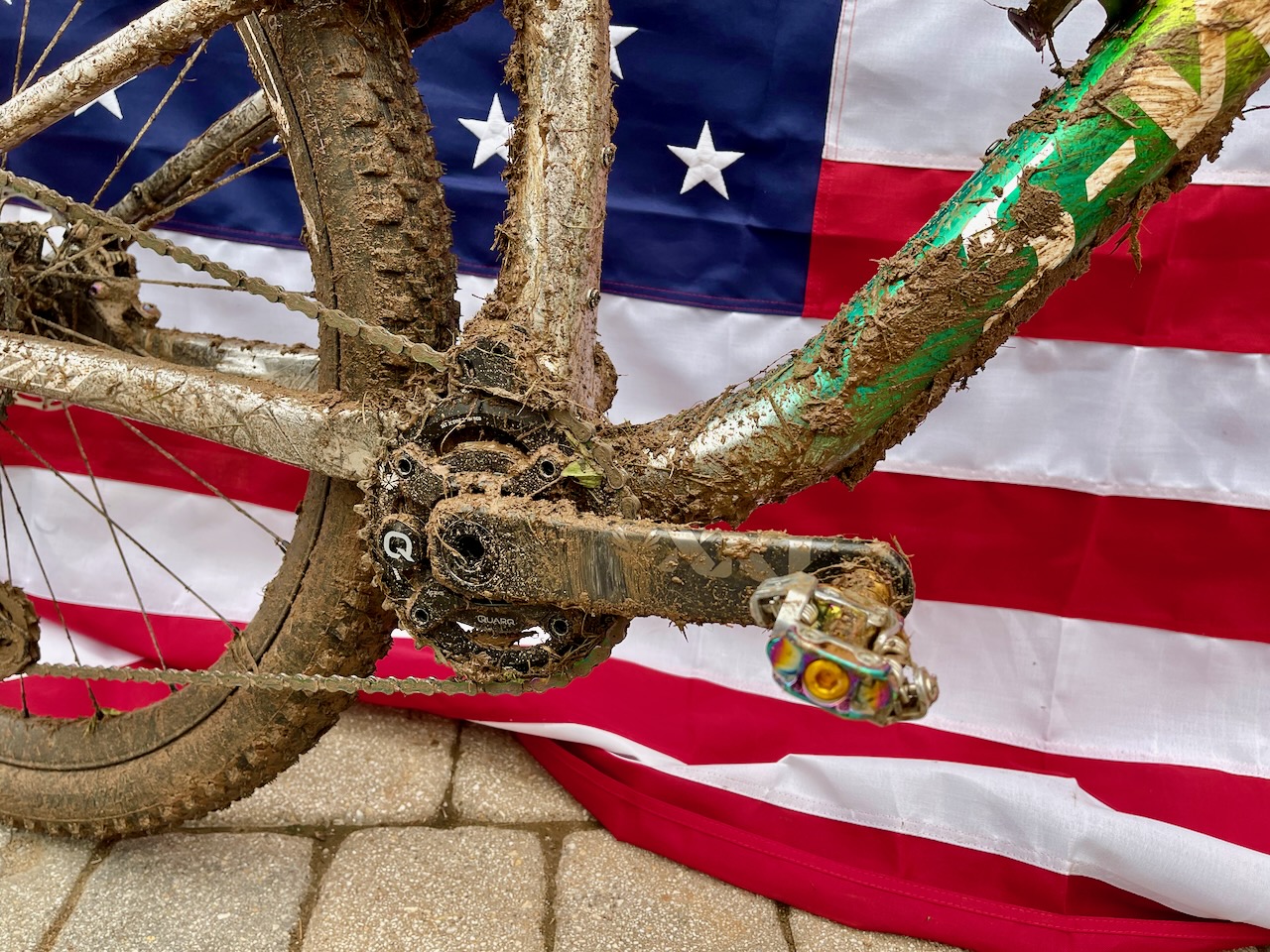 The tires, seat, and wheels (bearings included) are all stock you can purchase, with nothing super-secret behind-the-scenes tuning. Though, the custom World Champion “Champ” paint scheme might add a few hundred watts… 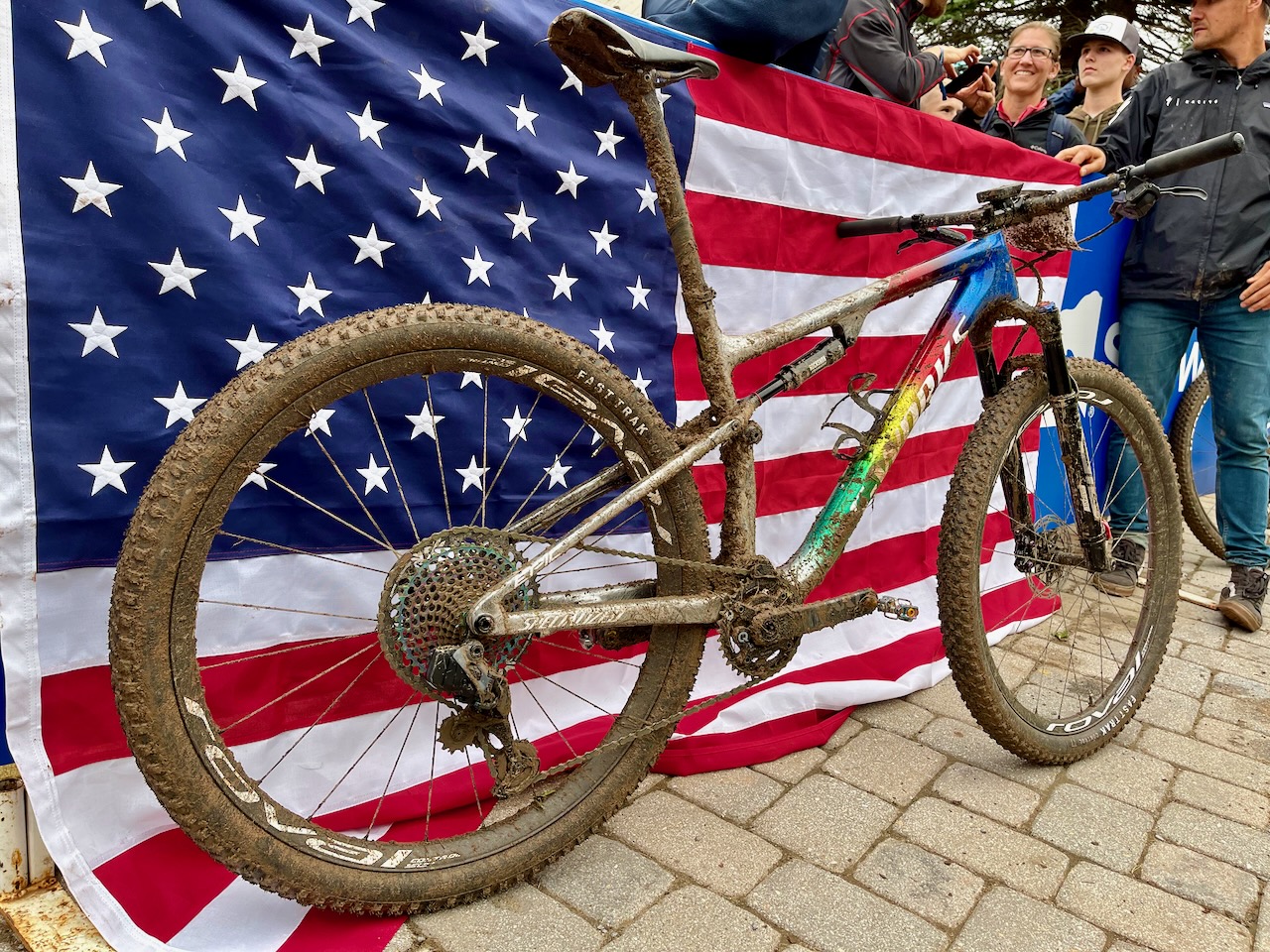 Its interesting that so many of the men still don’t use droppers. I know, they’re the pros and im weekend warrior Joe Hack. I think 100% of the women use them

XCO races are run on short closed course and if the course has some really long technical descents it really not worth running a dropper. As for men running vs women running droppers, I think because the men are a little taller they are able to get their center of gravity further back and their is less risk of going over the handle bars. For example Mathew Vander Pol is 6ft tall so in most instance he able to get his Center of Gravity far enough back not to go over.

This is his short track setup. Blevins had a dropper for the XCO event. Essentially everyone did. While generally not necessary for comparatively less technical short track racing, wold cup XCO races are way harder now and the vast majority of riders run a dropper post these days.