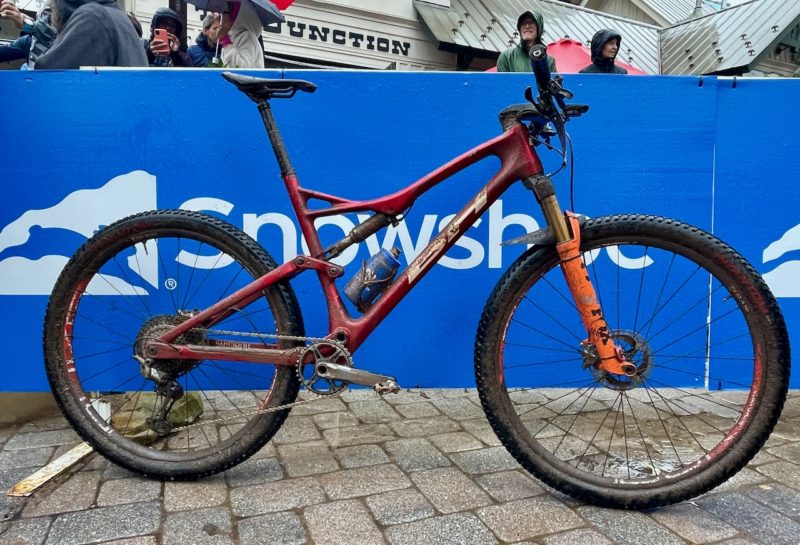 The XCO UCI Cross-Country Mountain Bike World Cup at Snowshoe, WV, was not for the faint of heart, both riding or watching. The slick, rocky, rooty course left spectators nail-biting until the very end of every race. 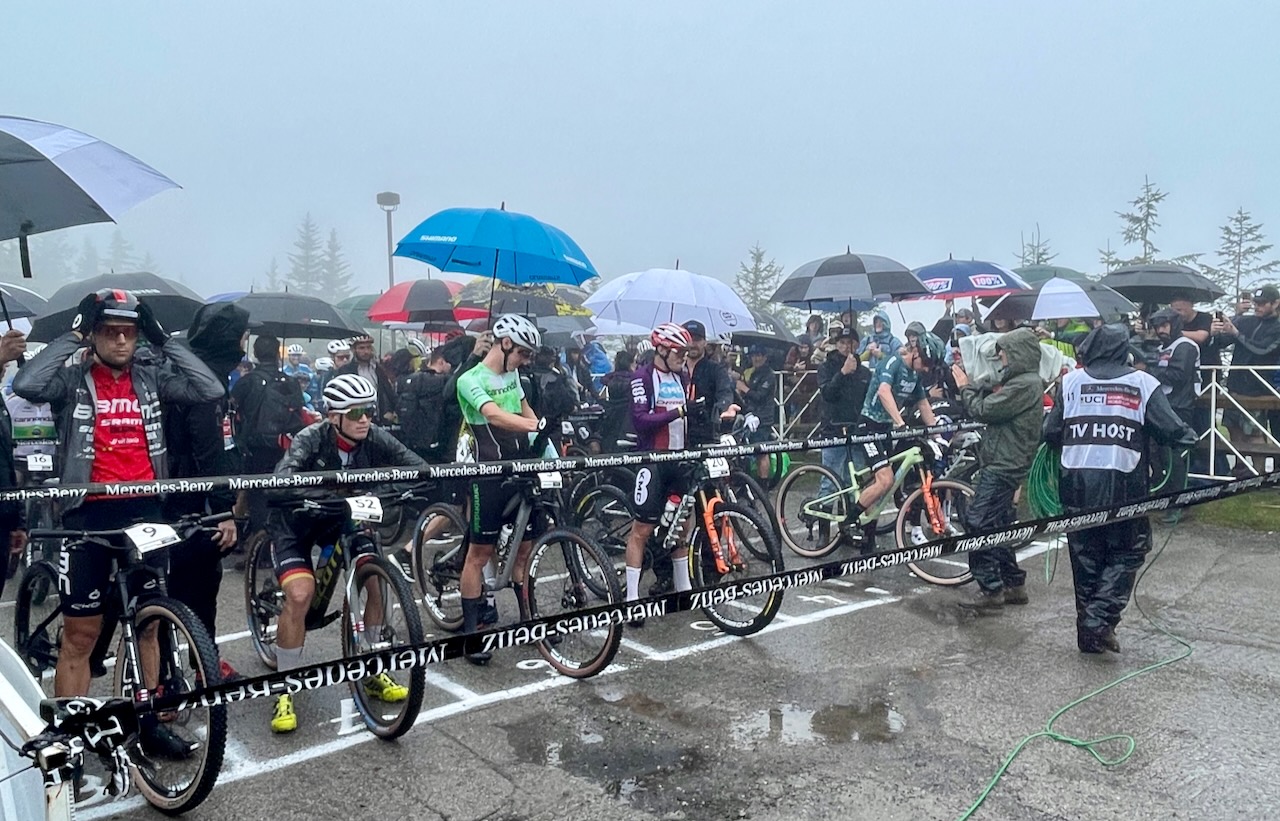 The Elite Men’s XCO was the day’s final race, and all eyes were on American Chris Blevins, Frenchmen Titouan Carod Luca, and Spanish veteran David Valero Serrano. Blevins secured a convincing win in the XCC just days before, and Valero has been knocking on the door of a World Cup win all season, the same with Carod. 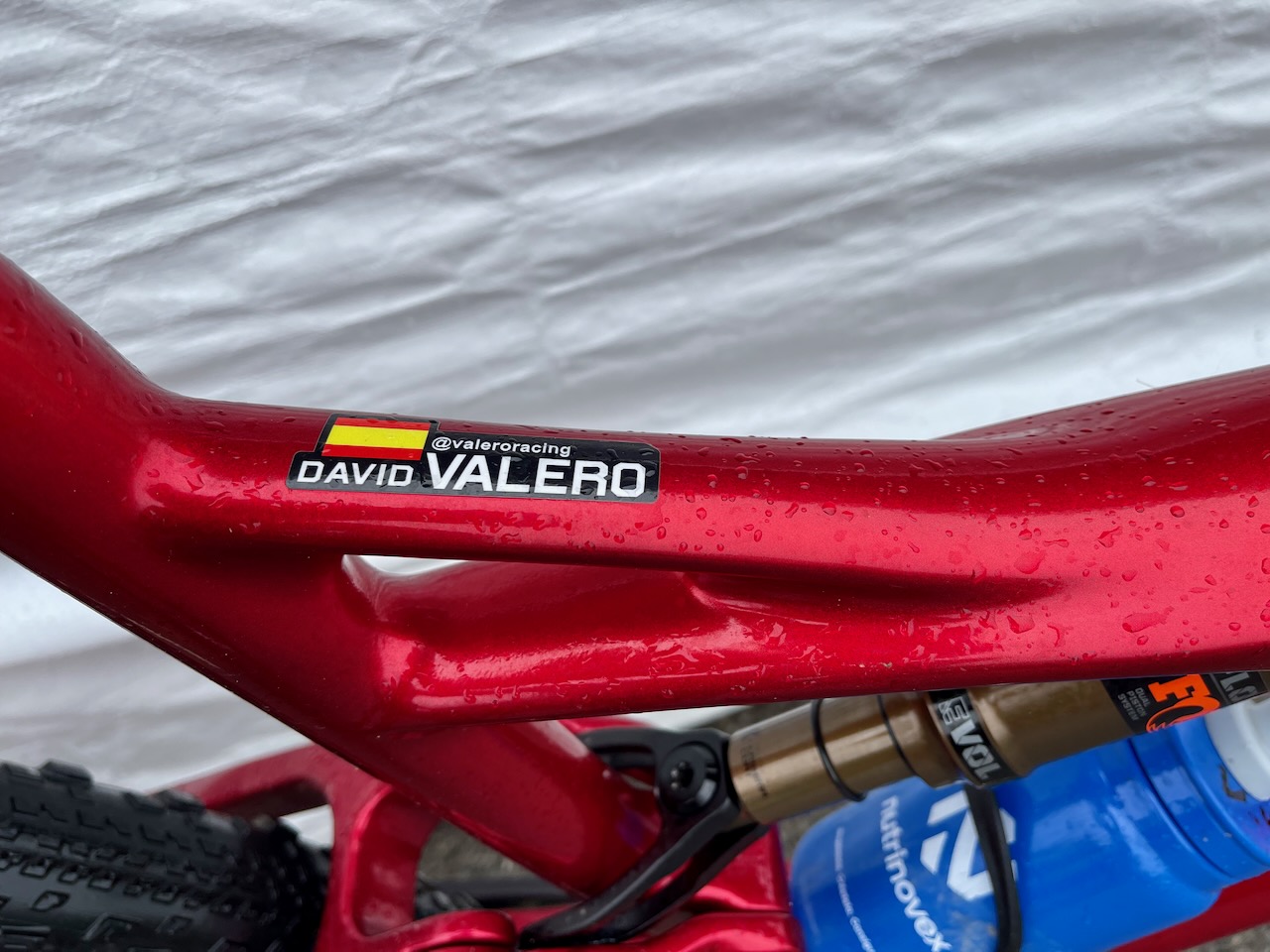 Valero finished a season’s best second place in the relentless dust and heat in the previous round in Andorra. The conditions for the UCI Cross-Country Mountain Bike World Cup at Snowshoe, WV, couldn’t have been more different, but nothing could stop the Spanish powerhouse from claiming his first World Cup victory. 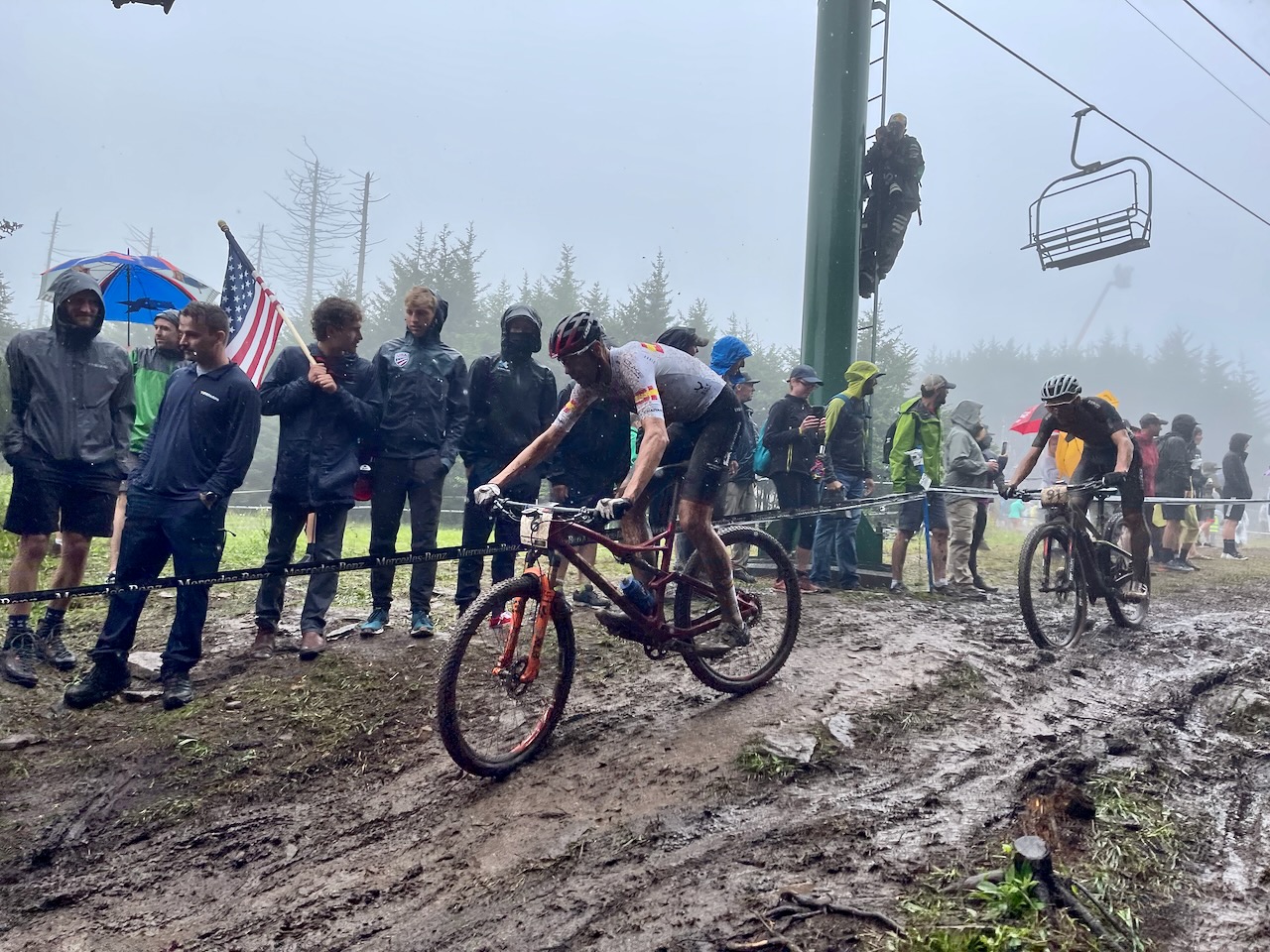 Torrential rain, slippery roots, and rock gardens turned the course into one of the most demanding seen on the World Cup circuit for some time, pushing riders and bikes to the limit. The riders did eight laps on the modified course, as some features from the previous years were unpassable with the non-stop rain. The abbreviated course set the riders up for shorter laps and careful race tactics. 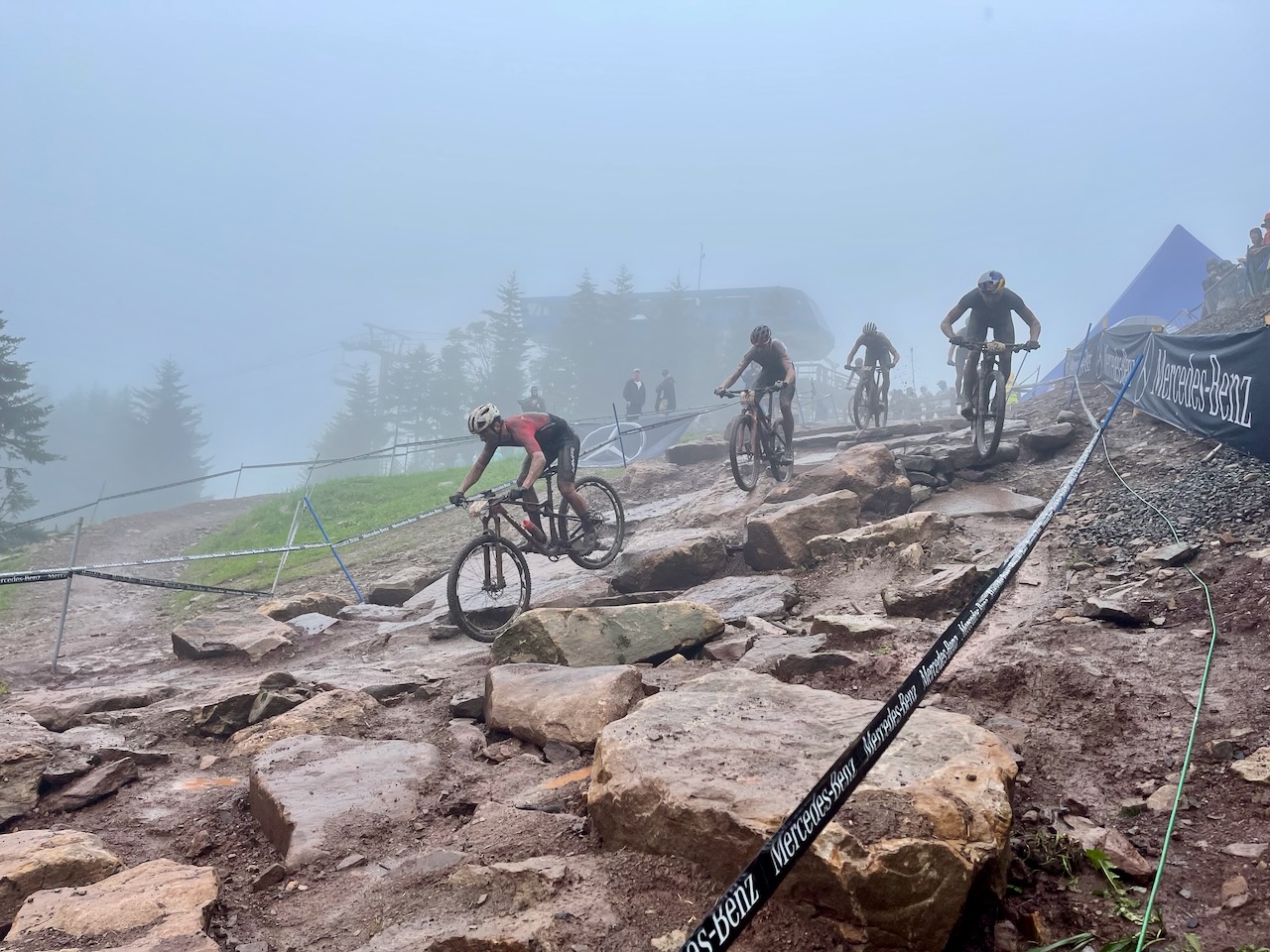 Alan Hatherly jumped on the gas early, sensing he could take the overall World Cup lead after Nino Schurter had to sit the race out following a crash in the XXC race. On the third lap, Hatherly crashed hard while battling at the front with Blevins, separating him from the lead group for the remainder of the race. 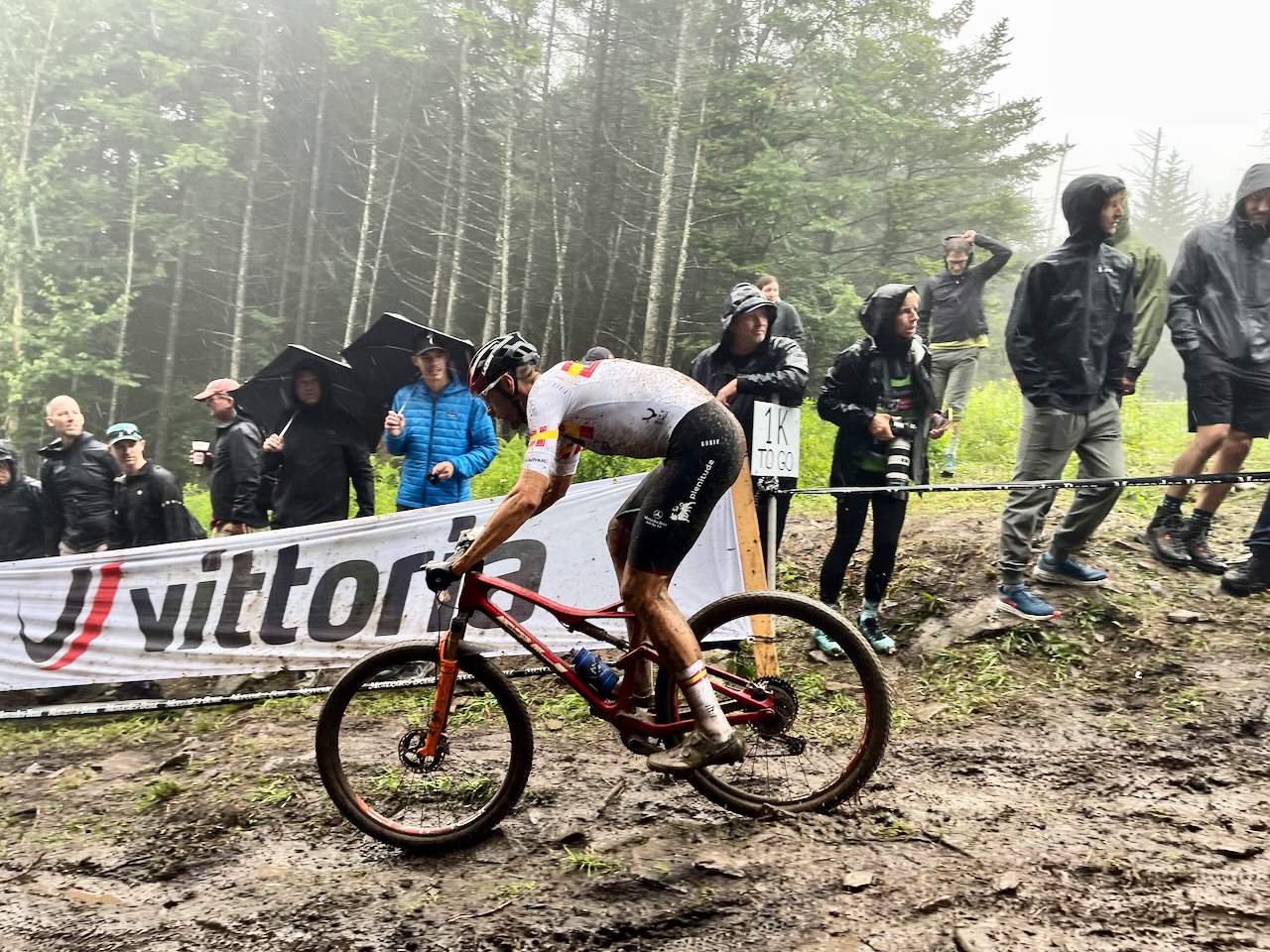 The men’s race was an emotional roller coaster; on the fourth lap, while in the lead, Blevins suffered a rear wheel flat, fortunately very close to the pits. Luca Braidot and Tituoan Carod took to the front to add distance to the chase group, but Blevins would rally back and rejoined the front on the sixth lap. 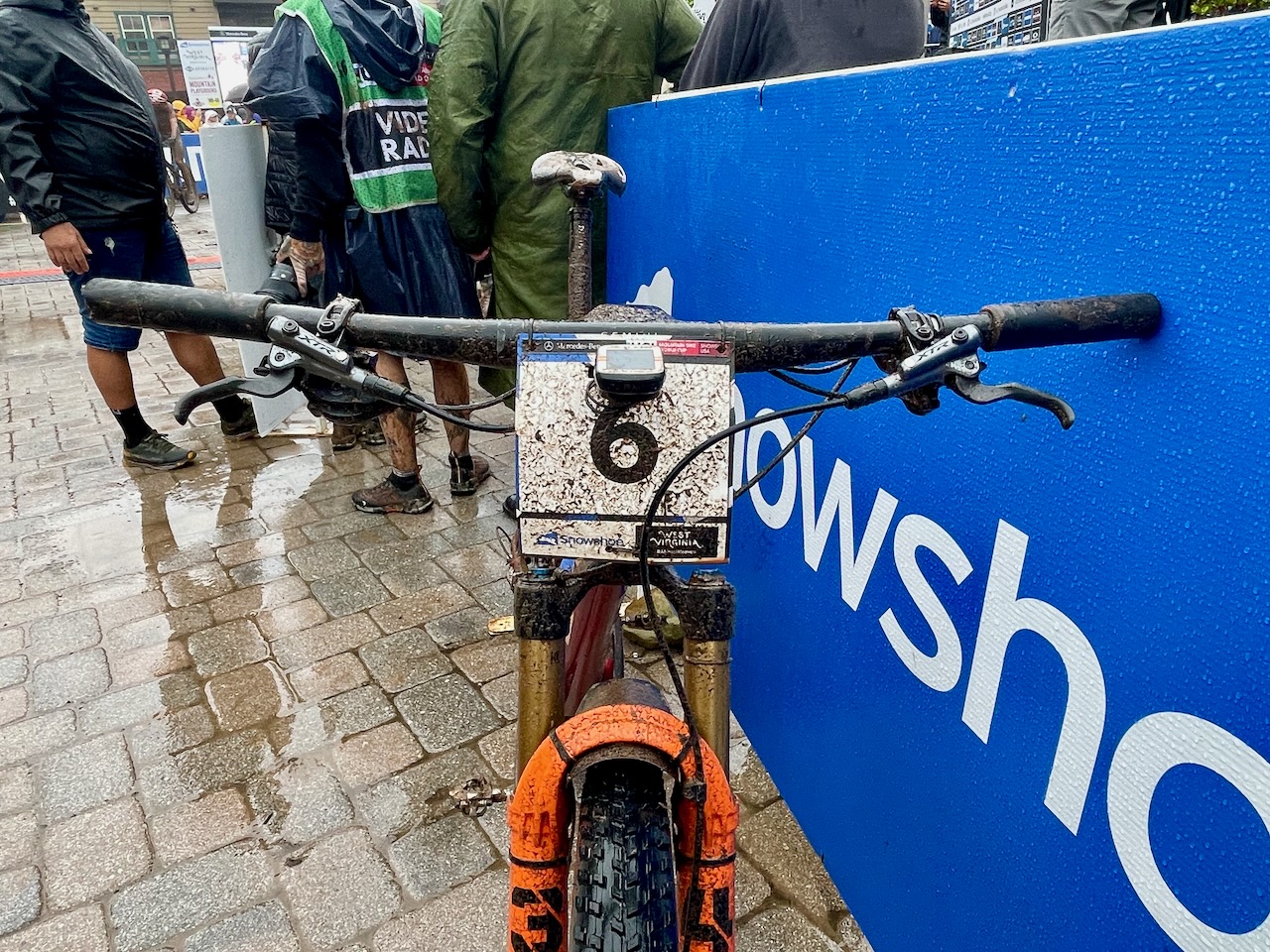 Lurking in the distance, possibly not on the radar of the front group, was Valero, slowly running negative splits and moving from the top ten to the top six and fighting for the win.

As the riders started the final lap of the course at Snowshoe, Blevins, Valero, Carod, Braidot, Colombo, and Luca Schwarzbauer wasted no time showing their cards. Blevins launched an attack, but the effort of clawing back nearly 30 seconds after suffering a flat tire set in, and the group could sense it. 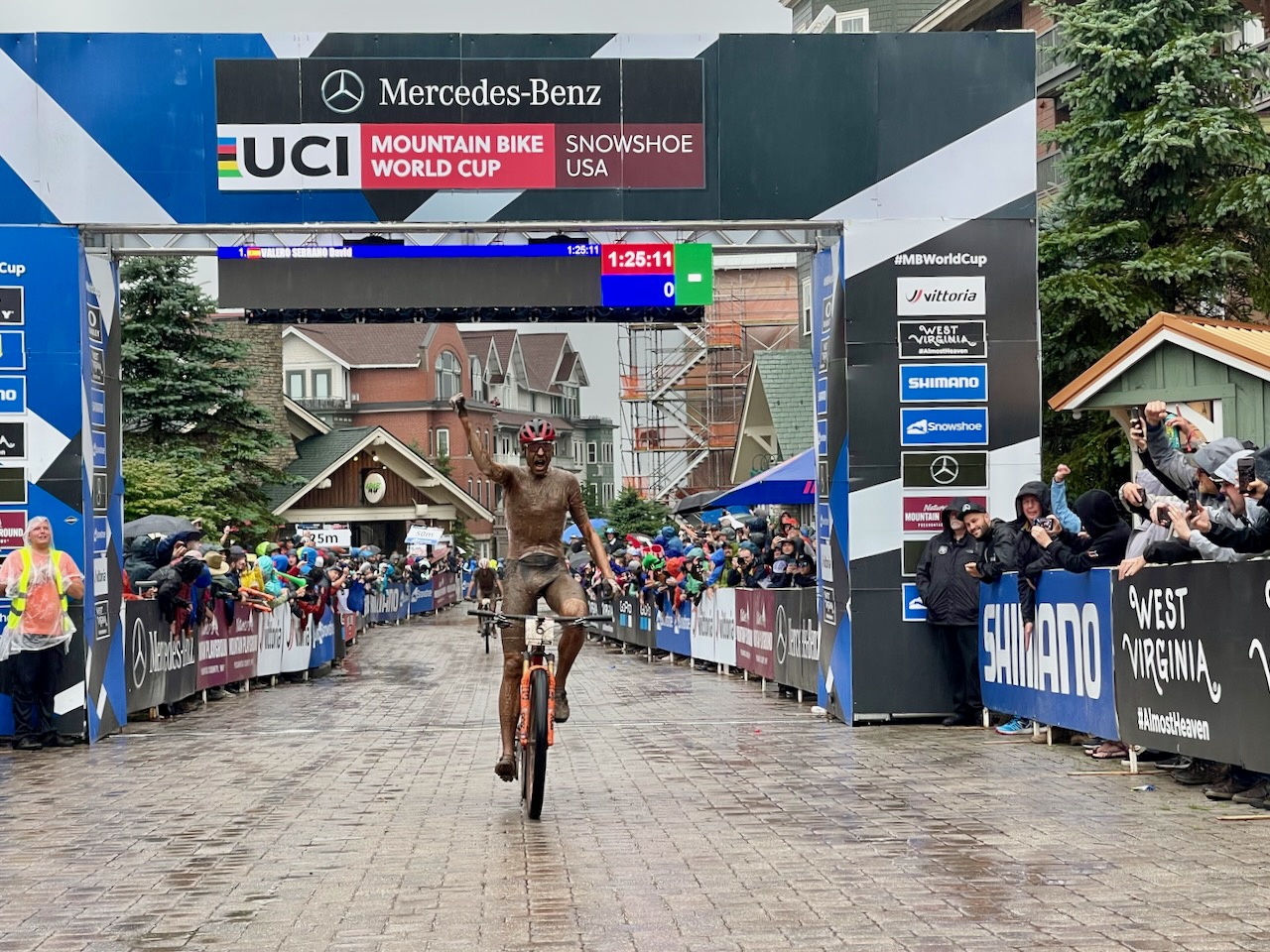 Valeros’ race intuition was right on the money, attacking the final third of the lap and holding it over some of the most challenging sections of the course. The chasers could only watch ride away on the assent to the rock garden, putting seconds into the group. He crossed the line directly to his team to share in the celebration, four seconds before Carod. 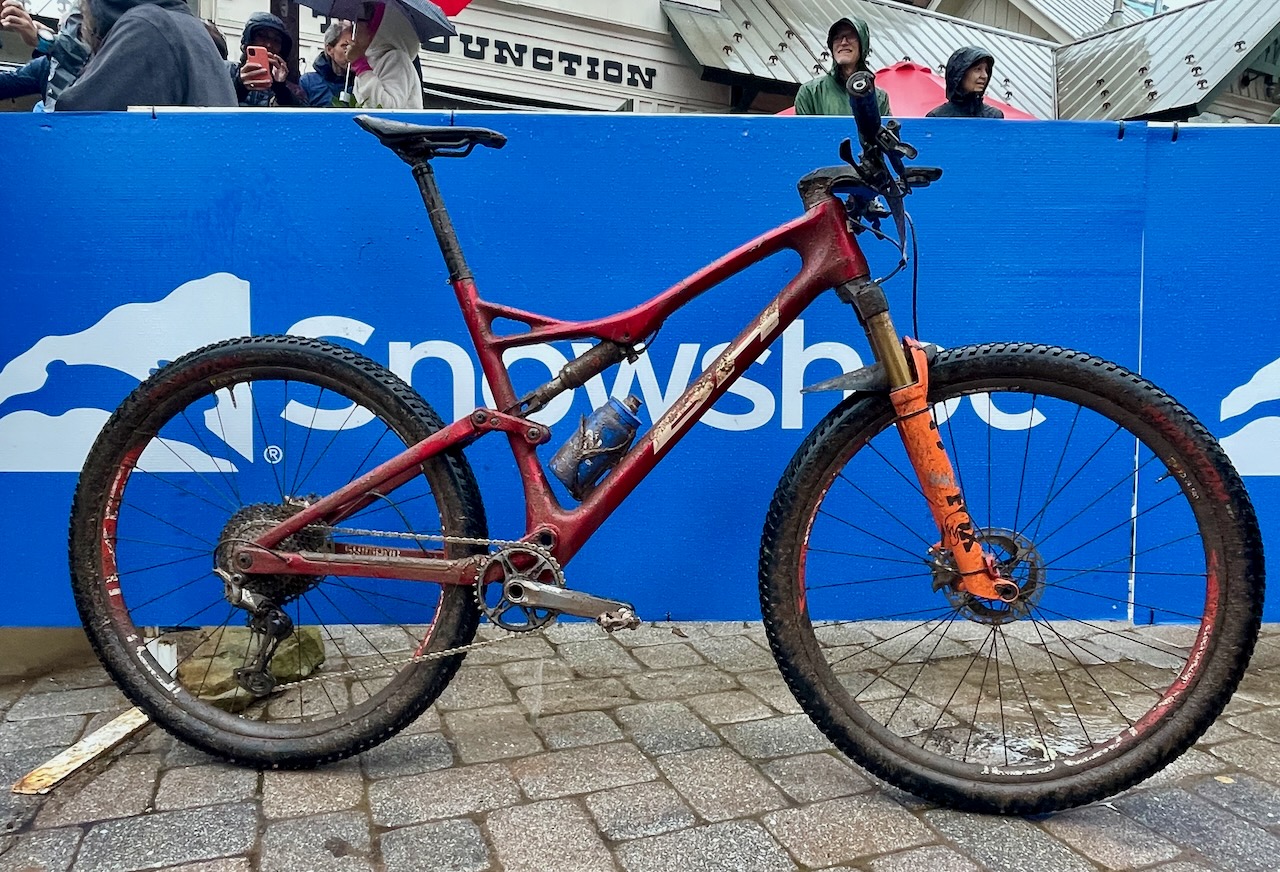 “It’s incredible to finally win a World Cup,” said Valero. “The track was extremely difficult. The downhills especially were very complicated with the mud on all the rocks and roots, incredible conditions really.”

The bike and crew

We spent some time in the pits with the BH team before the short track, talking tires, pressure, and trail conditions. 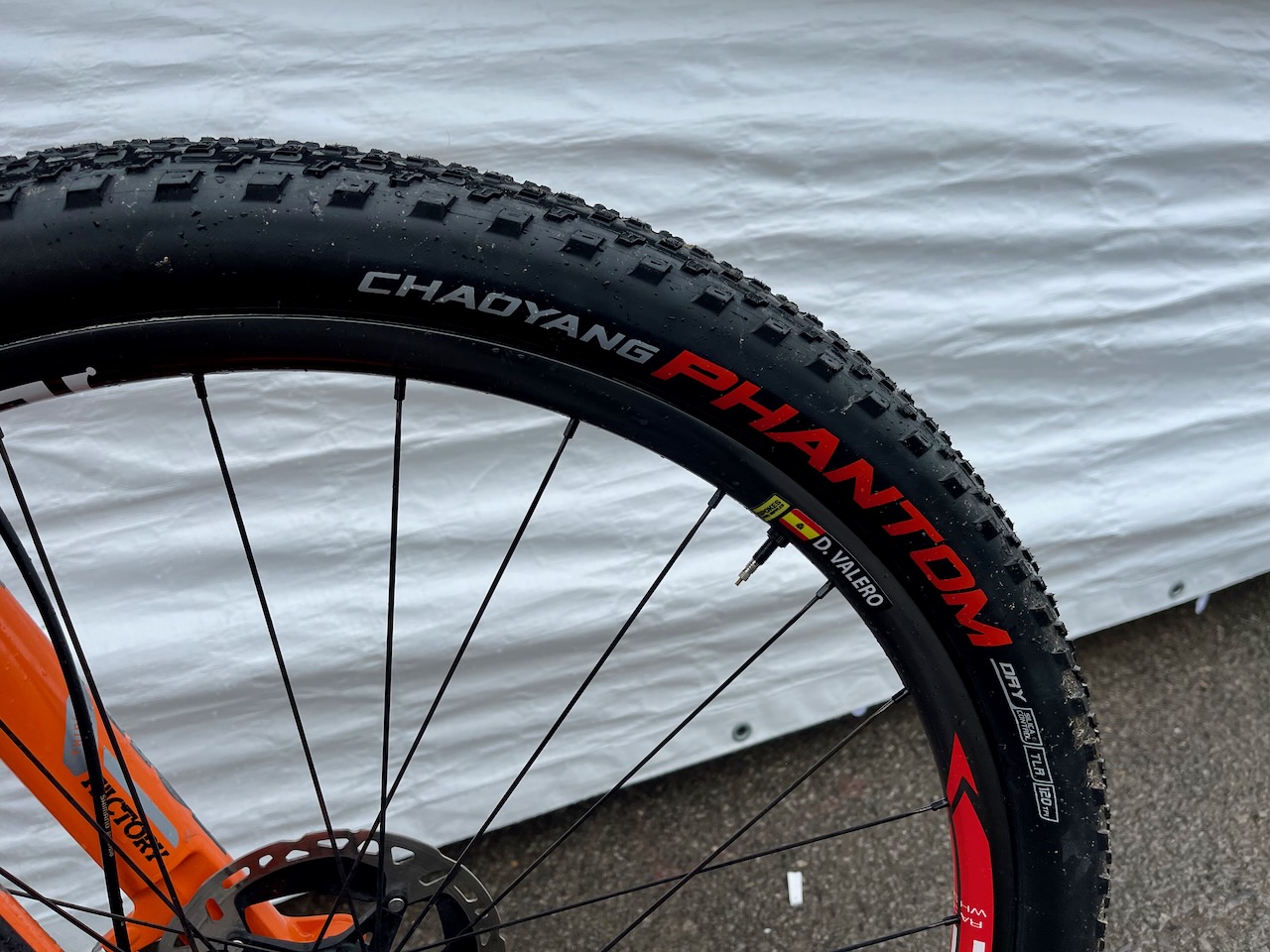 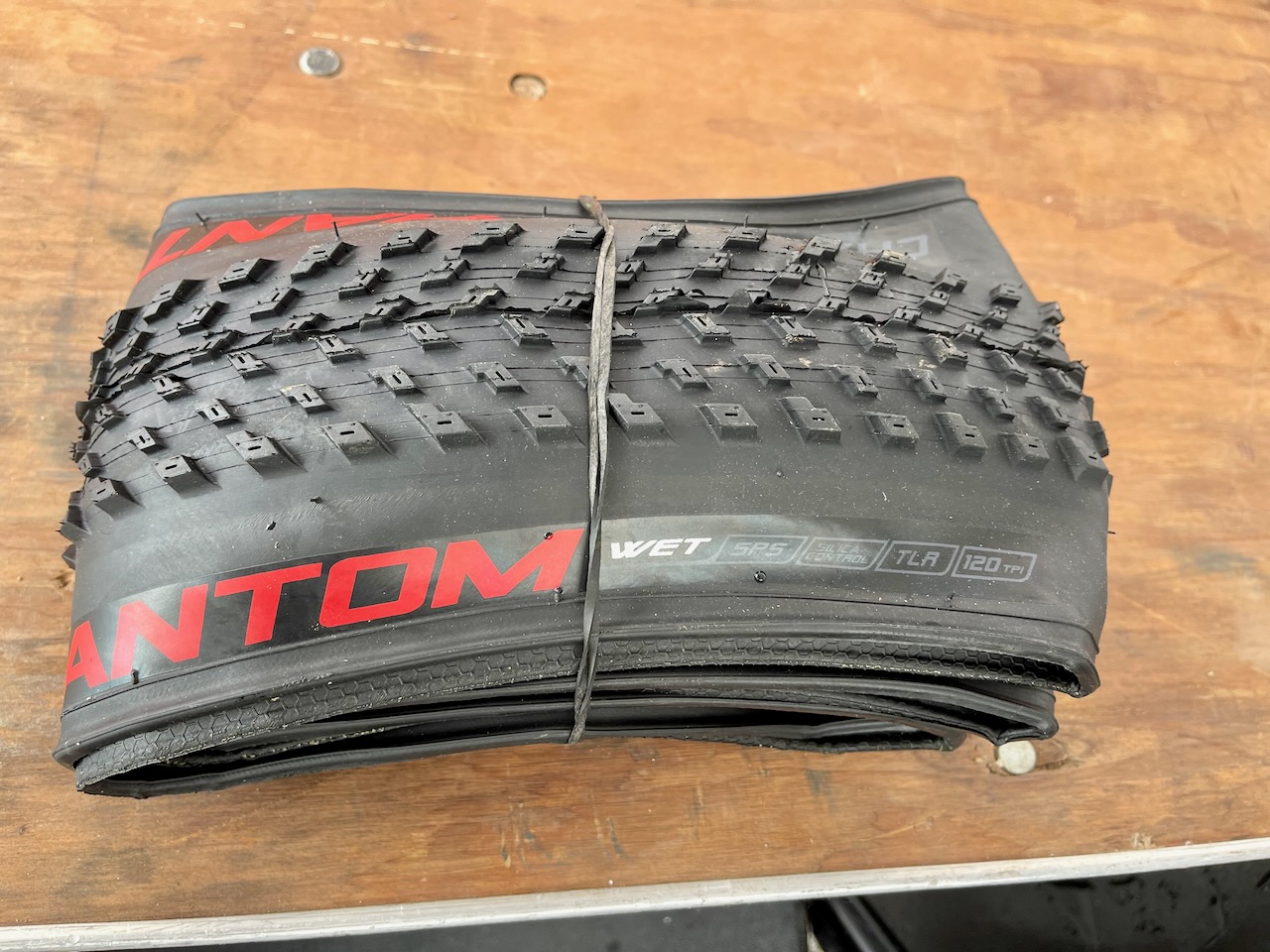 Valero’s team has more than a few tires on hand for the weekend. 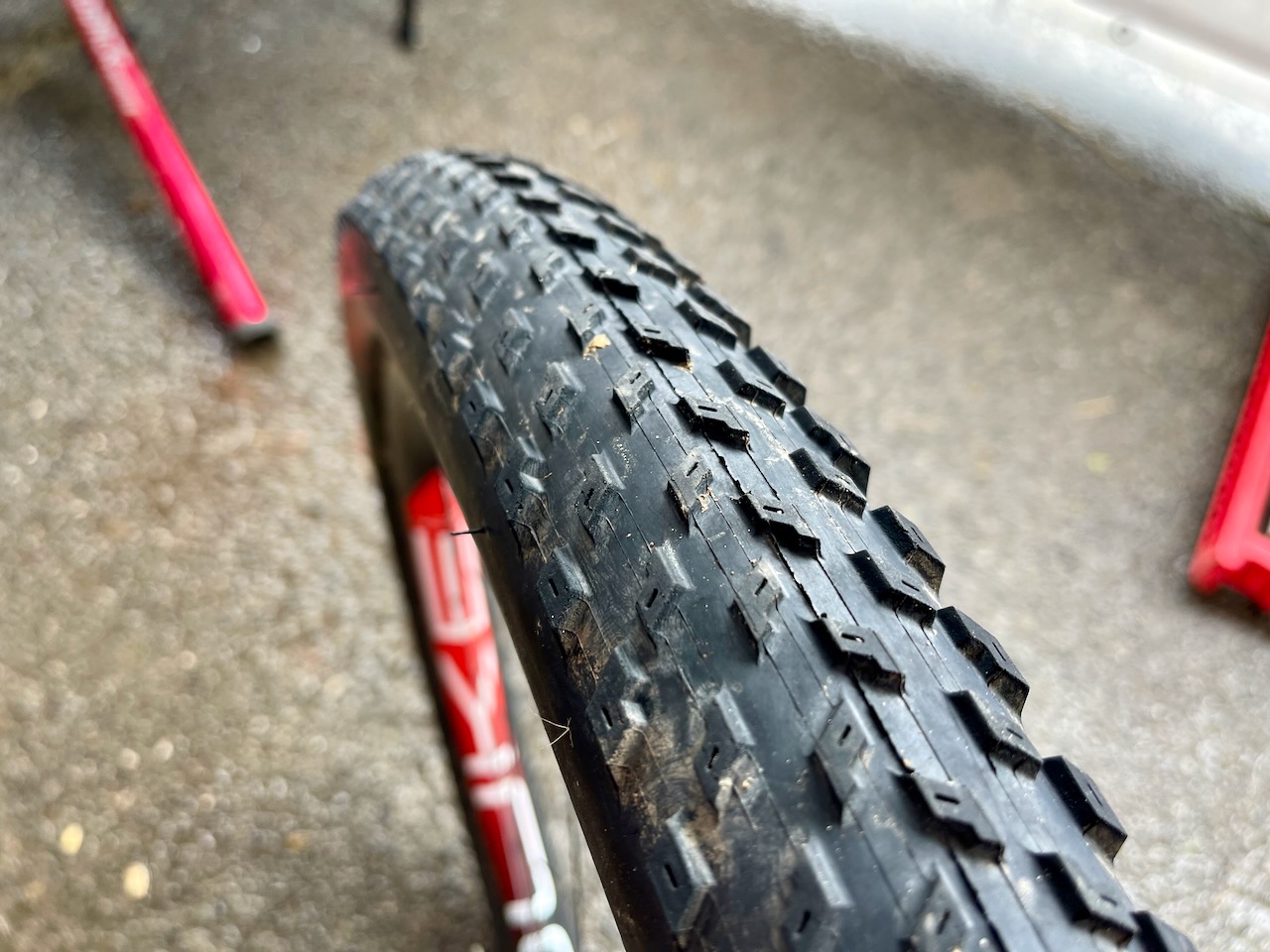 The tire looks like the older Specialized Fast Track, and Vittoria Barzo had a baby. The casing on the Chaoyang Phantom Wet is robust and held up to the roots and rocks of WV. 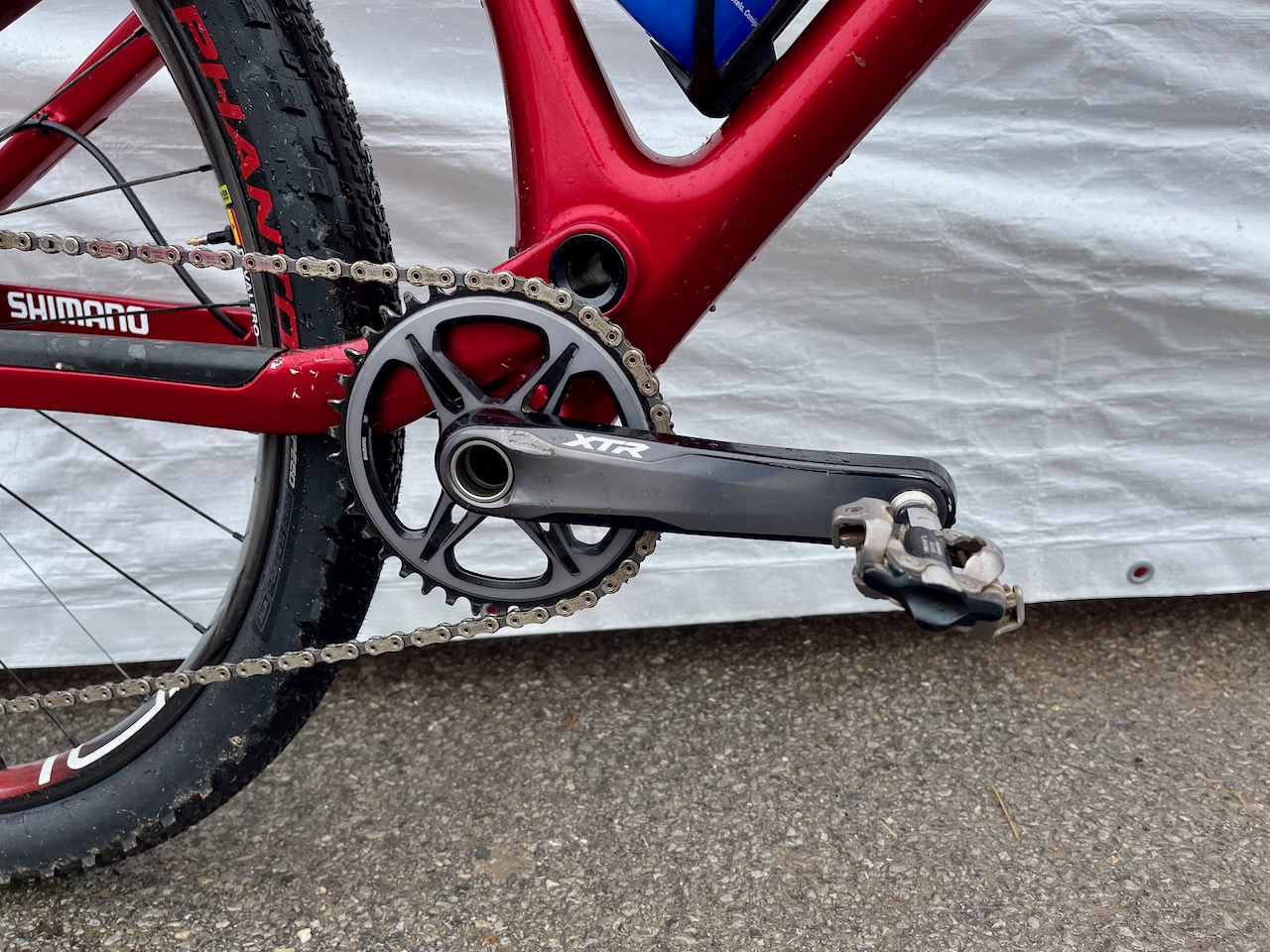 The team stayed with the 38T front chain ring and a Shimano XTR 10-45T cassette as the short track. The Duke wheels gave the Chaoyang Phantom Wets a nice footprint and were extremely light — take our word.

Another component that stuck out was the Gemini PRÖPUS one-piece bar stem combo. The look is super clean and is said to be 145g for the lightest package. 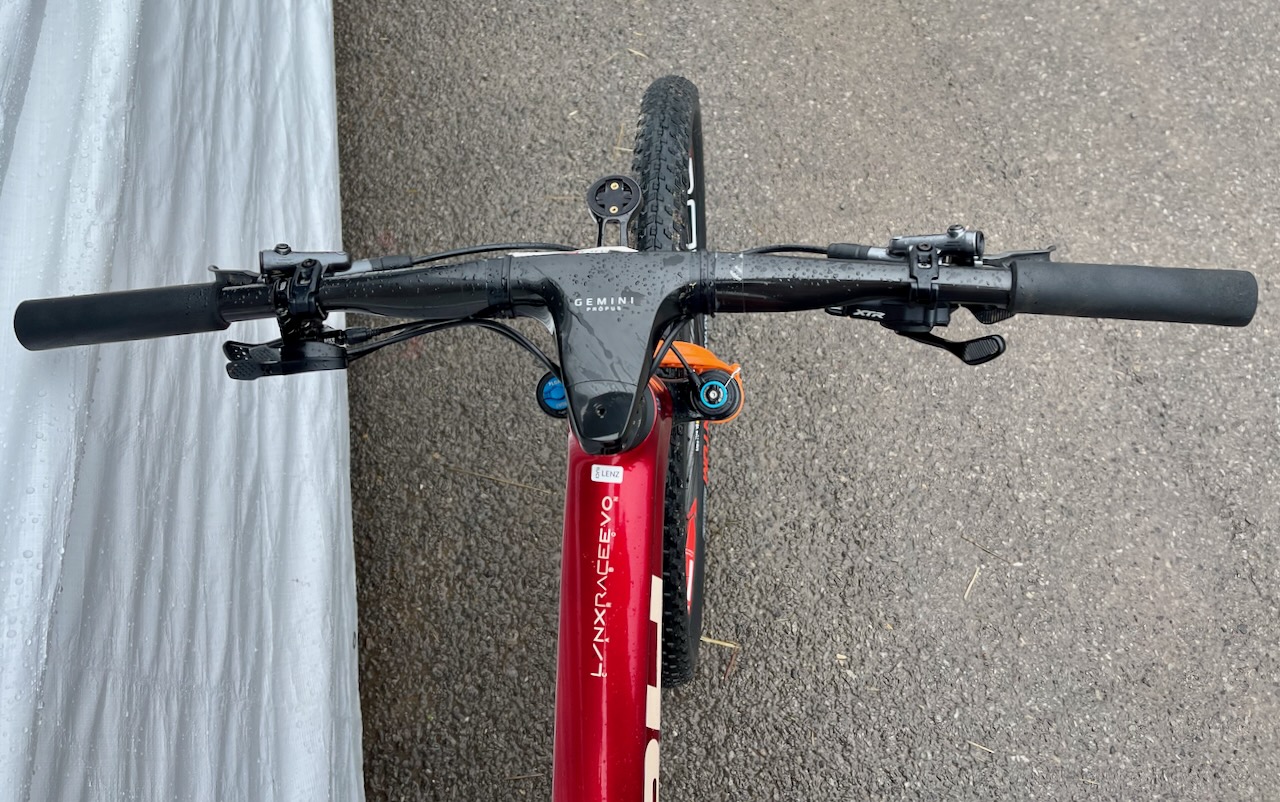 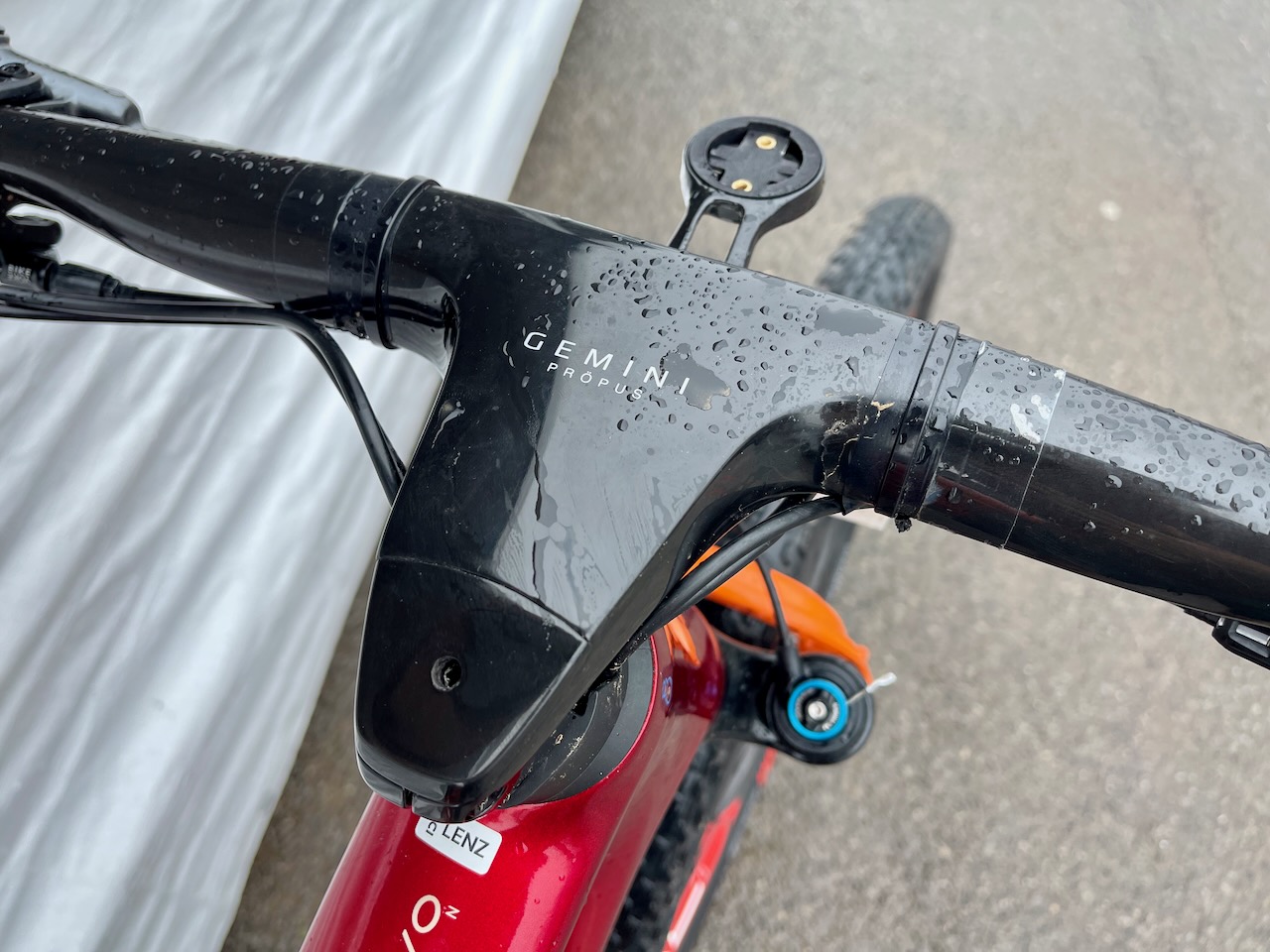 Ultimately, the bike setup was the right mix of resilience and race-ready for the UCI Cross-Country Mountain Bike World Cup at Snowshoe, WV. 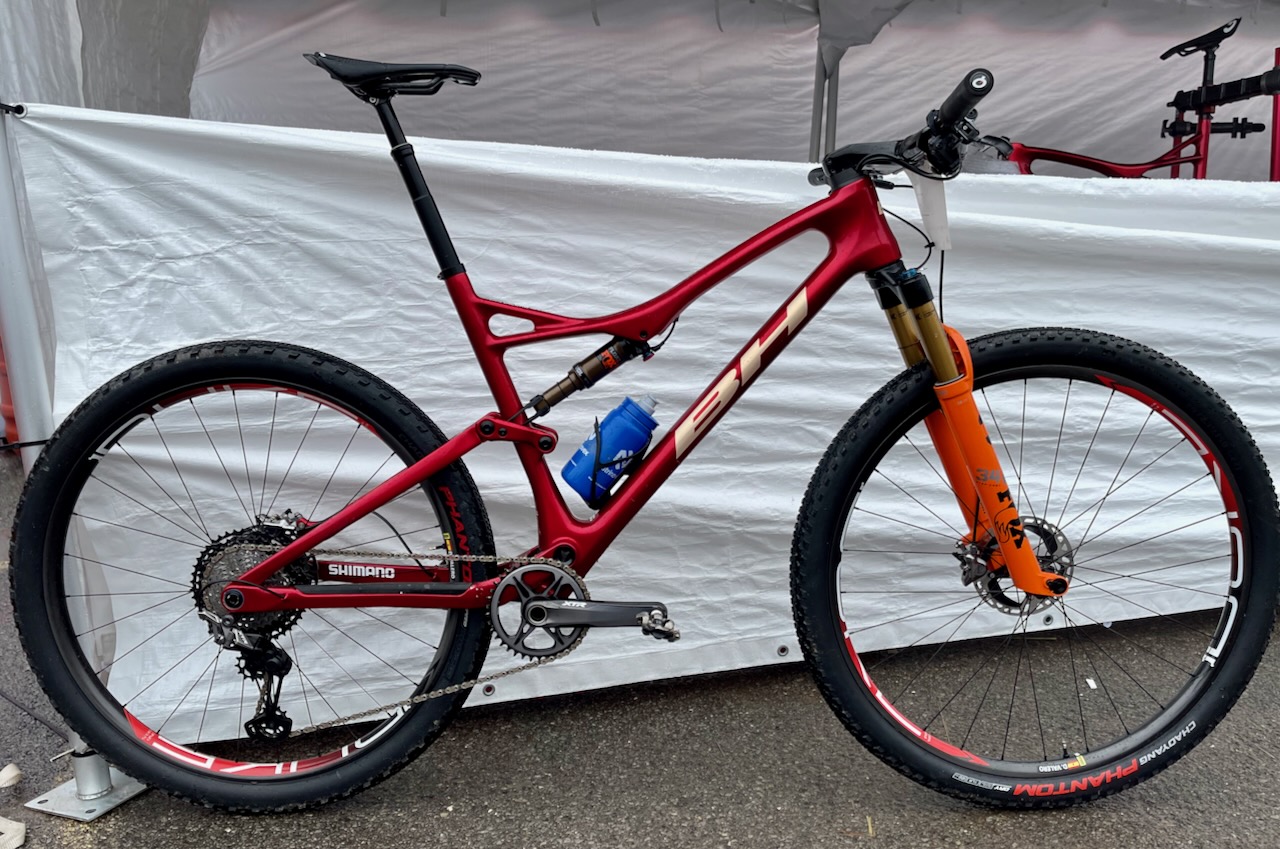 It is indeed Blevins, not Blevens. I double-checked with the post before yours before responding.

I am glad BH went with the seat post swing link design full suspension design, unfortunately, their design sadly only allows for one water bottle mount and limited internal frame volume for a frame bag for everyday training rides.

I wish we could still get them in the US!

Great tire description. I was looking at the tread and my mind was convinced that that I had seen that tread before. Nope, just a combo of two of my favorite midwestern USA tires.

If Specialized made this, we’d all be saying, “Wow, looks just like a BH.”

I’ll say it: This looks just like an Epic EVO.

Lots of differences, both aesthetically and technologically. But many XC dual suspension bikes look alike at first glance.

Looks like the bike has the wrong geometry. Look at the position of the saddle completely on the forward position.

The Split Pivot System is incredible!!