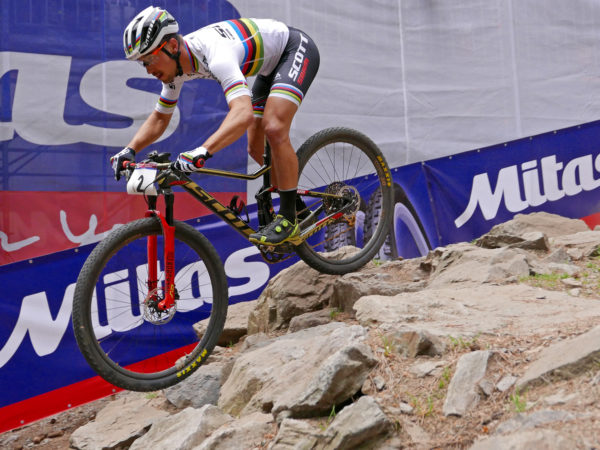 So in a little bit of déjà vu from yesterday’s racing, today another Elite World Champion won the first round of the XCO World Cup aboard the same bike that they earned their rainbow stripes on the same course in Nové Město na Moravě. But unlike Langvad’s bike build that was for the most part the same, Nino Schurter’s Scott Spark RC was built up with almost all new components except for his trusted SRAM XX1 Eagle drivetrain. Get a closer look at all of the new kit on his bike this season, and see what it does to his actual race weight hanging on our scale… 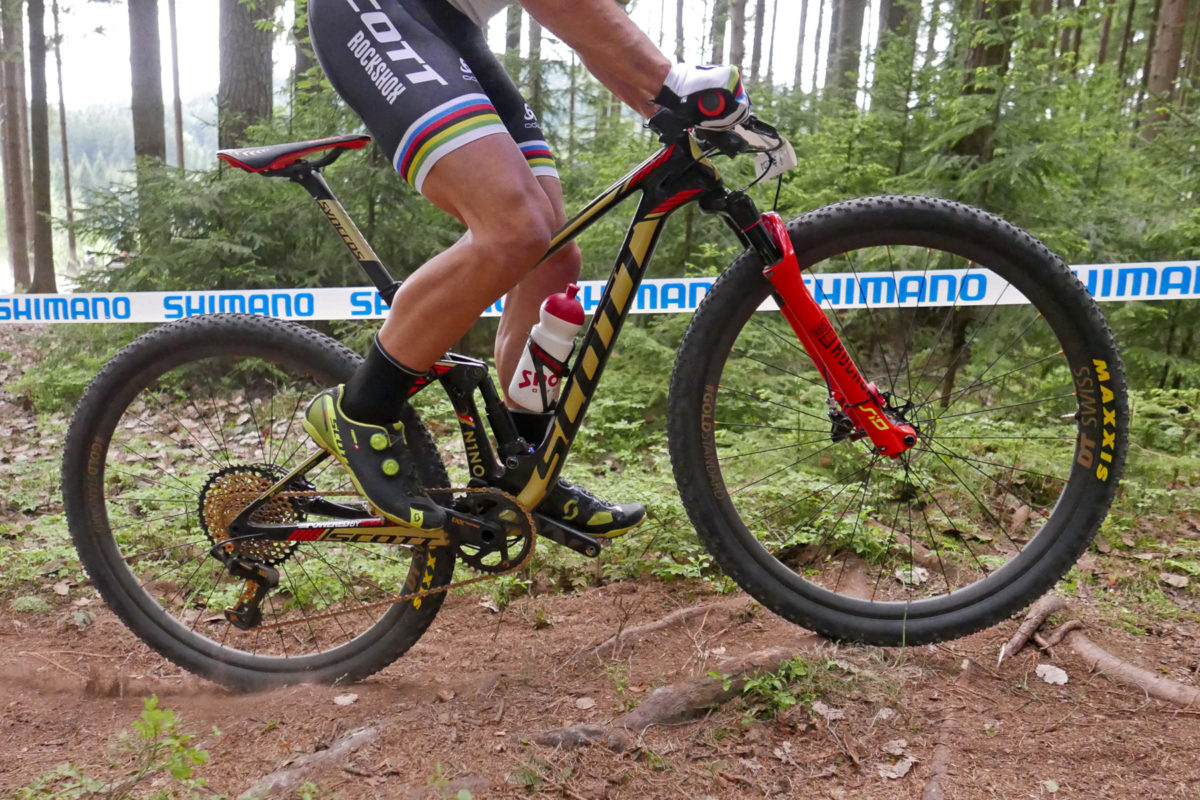 The core of Schurter’s ride stays the same this season – the same Scott Spark RC 900 WC 29er. In a nod to durability in rough & tumble racing, as we’ve seen before Schurter’s team all compete on the WC-level HMX carbon bikes instead of the slightly lighter (~100g) SL version. The bike still stays pretty light with a top-shelf build throughout, but always leaning for reliability than just chasing grams. A complete carbon SRAM XX1 Eagle 1×12 groupset is one way to keep weight down, and goes well with the gold accents to celebrate the fact that Nino wins so many big races. 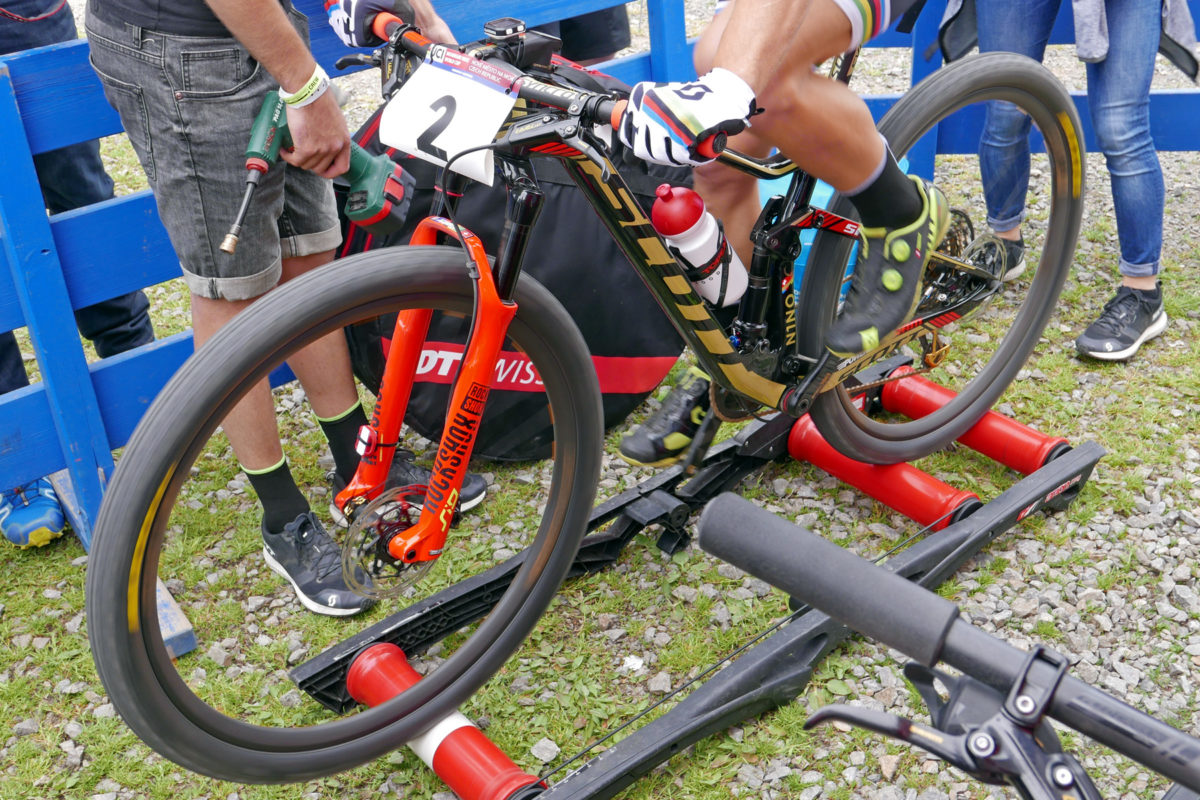 With the change in title sponsors from last year’s Odlo to SRAM for 2017 comes new suspension to match the drivetrain. Schurter gets a custom color of RockShox’s new SID WC fork with its carbon crown & tapered steerer. 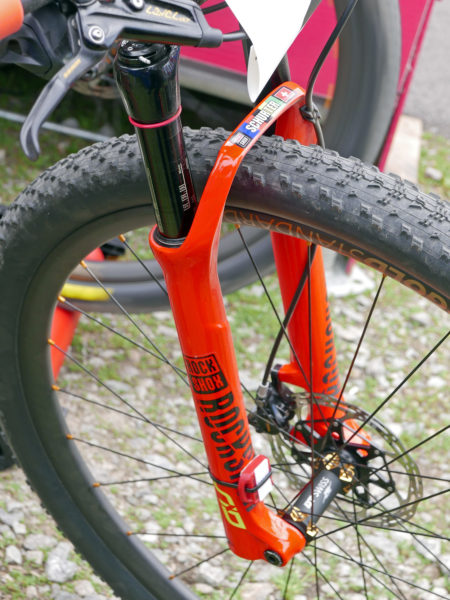 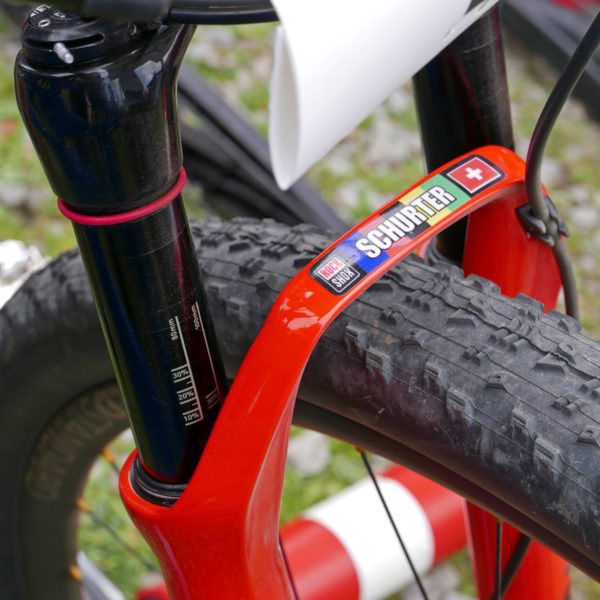 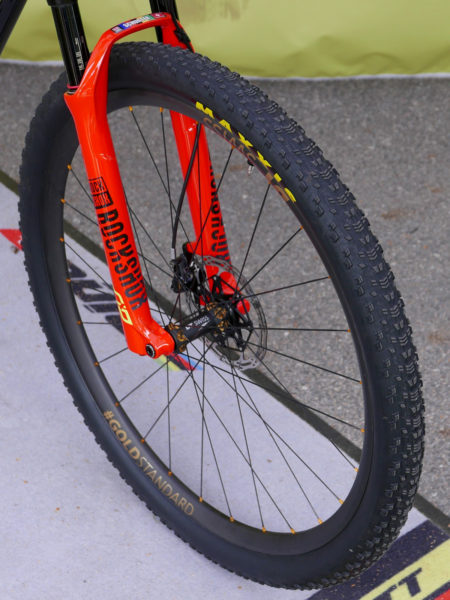 Getting a close look at that dark orange fork and SRAM has a nice custom World Champ rainbow & Swiss National Champ flag decal for Schurter. It also has us zoomed in on the tubeless Maxxis Aspen 29 x 2.1″ tires. Schurter raced the same tires with their logos blacked out last summer, and was happy with them enough that the team brought Maxxis on as a sponsor. The tires still don’t bear the model name suggesting they are the Pro-Only 170tpi version that we saw a few weeks back. Those tires are wrapped around a set of DT Swiss carbon wheels that don’t get any model name logos besides a hashtag. 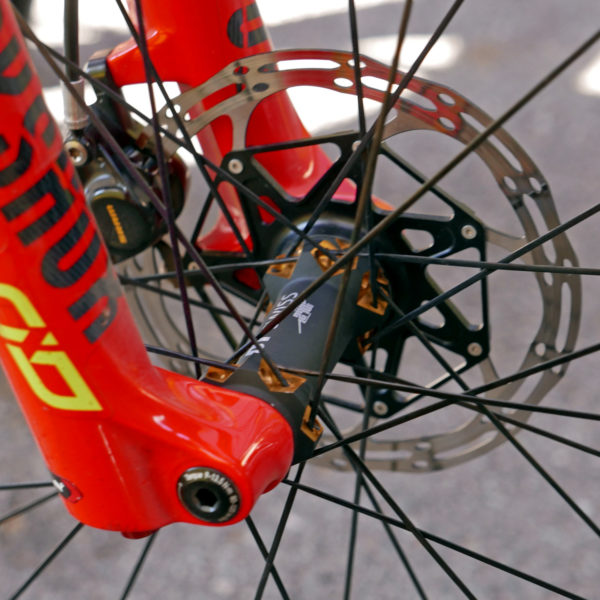 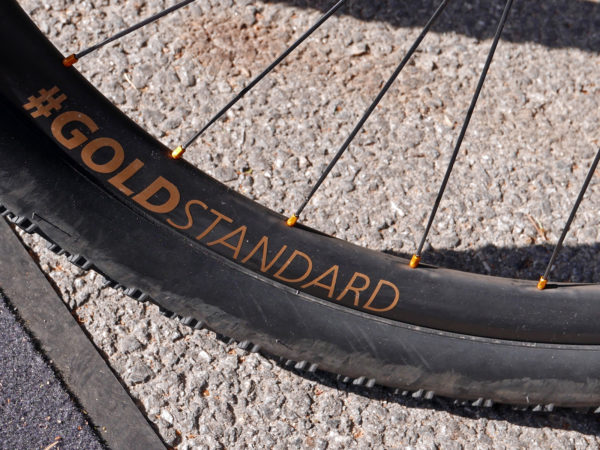 More gold detailing here from the machines bits on the 240s-based Spline hubs to the alloy nipples: #GoldStandard. We got an inside line from DT that they are actually the latest iteration of the carbon XRC 1200 Spline race wheelset that was introduced a couple of years back. This newest version is said to boost internal rim width up to 25mm (from 21.5mm) while still staying in the silly light category (think mid-1400 grams for a 29er wheelset.) 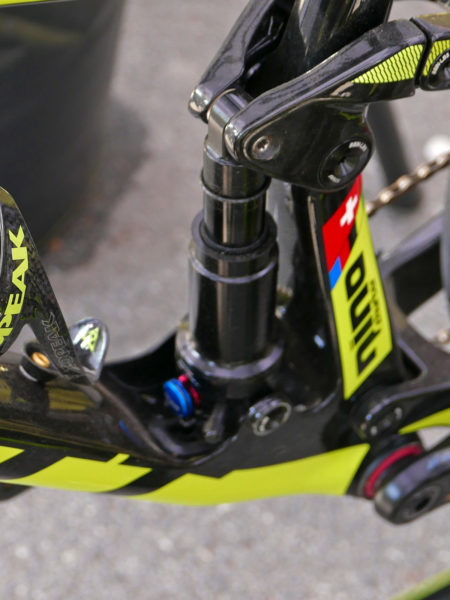 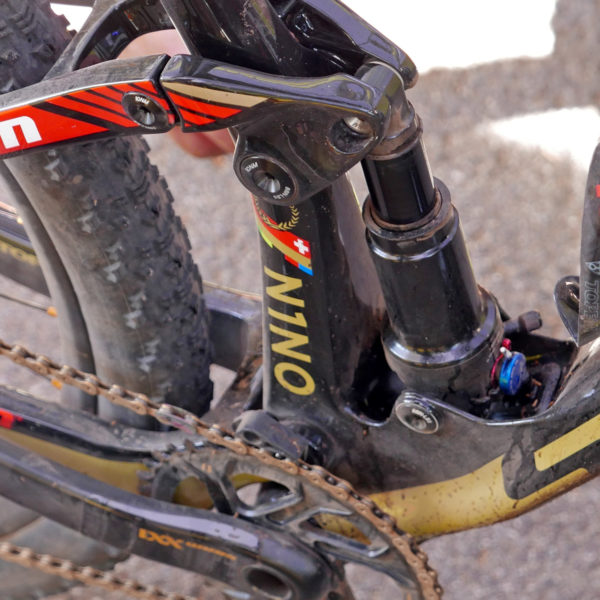 Curiously with the move away from DT Swiss suspension thanks to the new SRAM title sponsorship, Scott couldn’t put a RockShox shock in the Spark RCs for now. It seems that the remote lockout mechanism on the new RockShox Deluxe shocks doesn’t fit within the small pocket on the lower mount of the Spark RC frames. Have a look in close (above) at how the lockout gets routed internally through a small port into the downtube. For now Schurter is running a de-branded trunnion mount Fox Float shock, while RockShox is working on quickly developing a Deluxe solution. 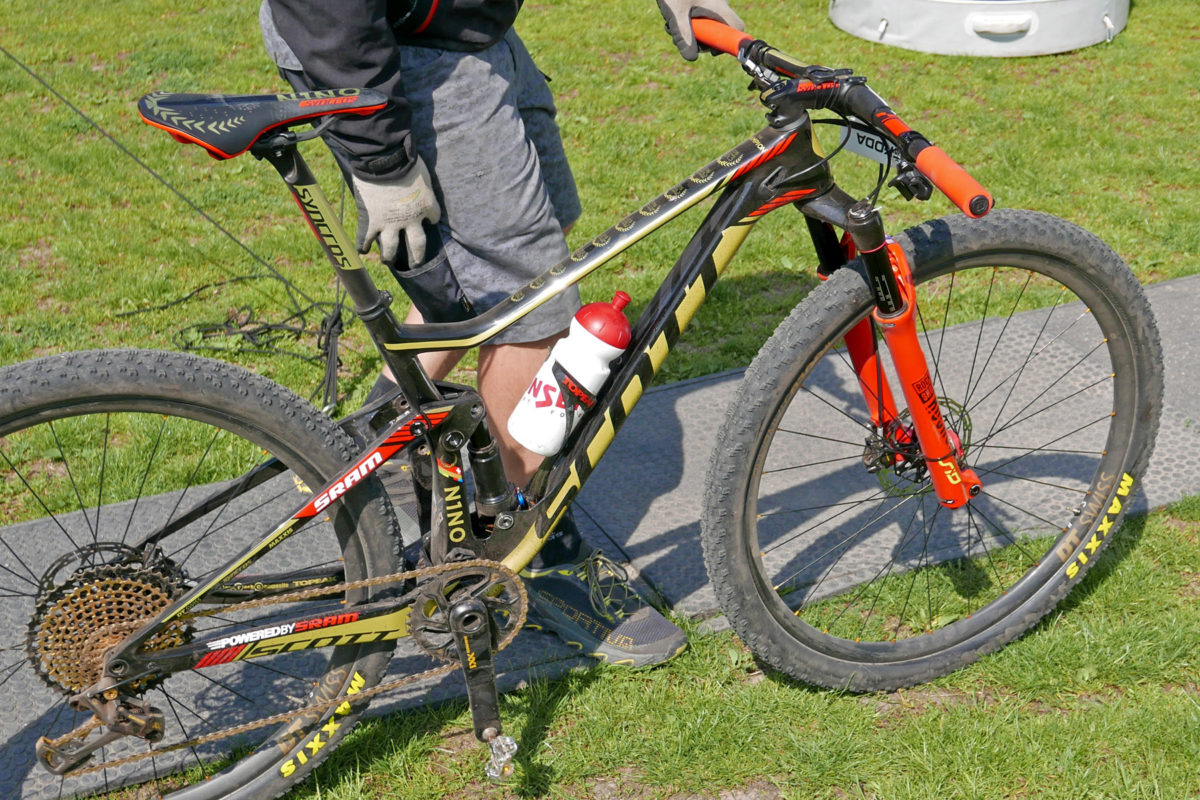 Cockpit component sponsorship goes from Ritchey to Syncros, so Schurter gets an all new bar, stem, seatpost & saddle setup. He does still stick with Ritchey WCS XC pedals that he actually played a big role in developing. 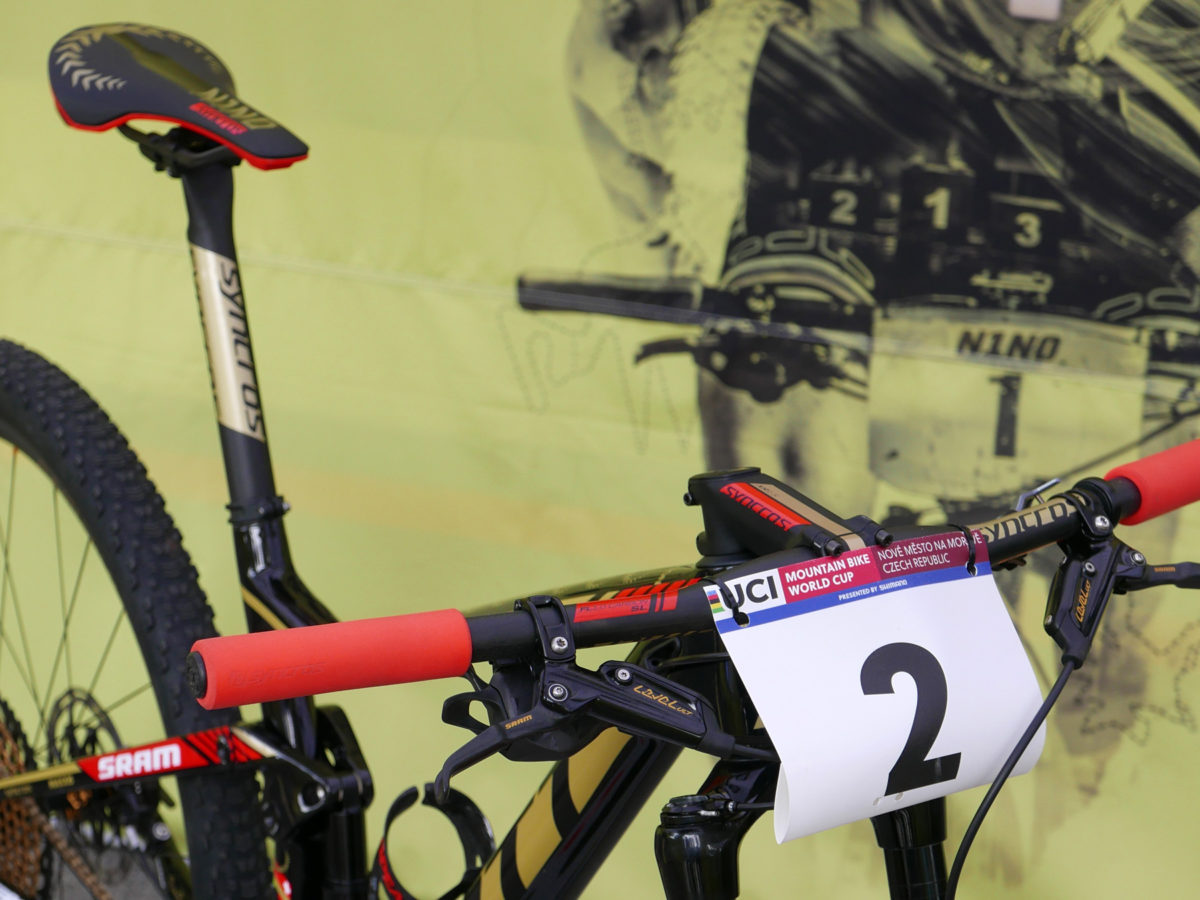 The Syncros carbon bar and seatpost, alloy stem, and carbon railed saddle all get special Nino-edition red & gold ‘The Champion’ palmarès finishes. The Syncros silicone grips of course also get in on the color scheme. Finishing out his cockpit are a pair of matching gold SRAM Level Ultimate disc brake levers. 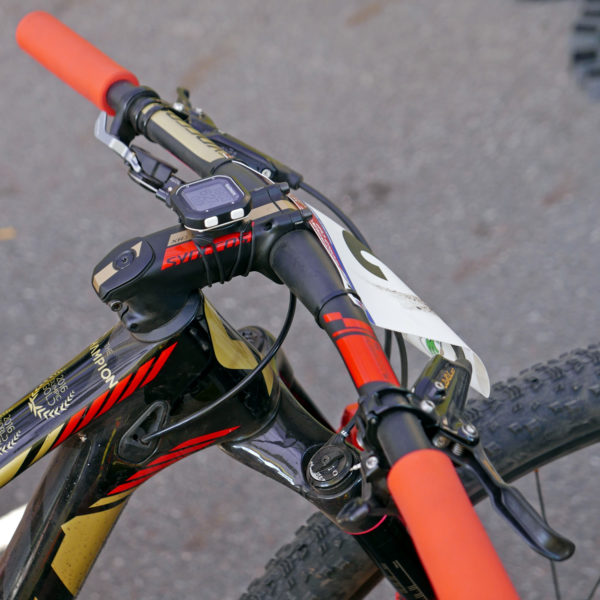 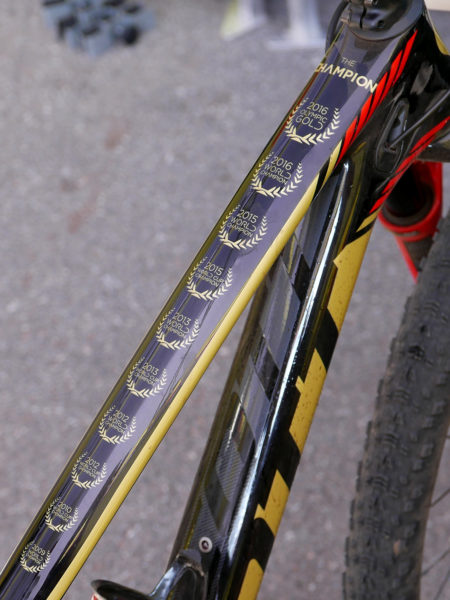 Schurter still is racing with a small Garmin Edge 25 GPS which tracks the essentials for him and the trainers without too much information getting in his line of sight while racing. One big thing he can look down on to stay motivated to push hard is his toptube. As we said the bike’s theme is ‘The Champion’. It’s hard to argue with as many big wins as Schurter has had, including 5 World Championships, 4 World Cup championships & and an Olympic Gold medal. If he goes on like he’s started this season he might have to find a bike with a longer toptube. 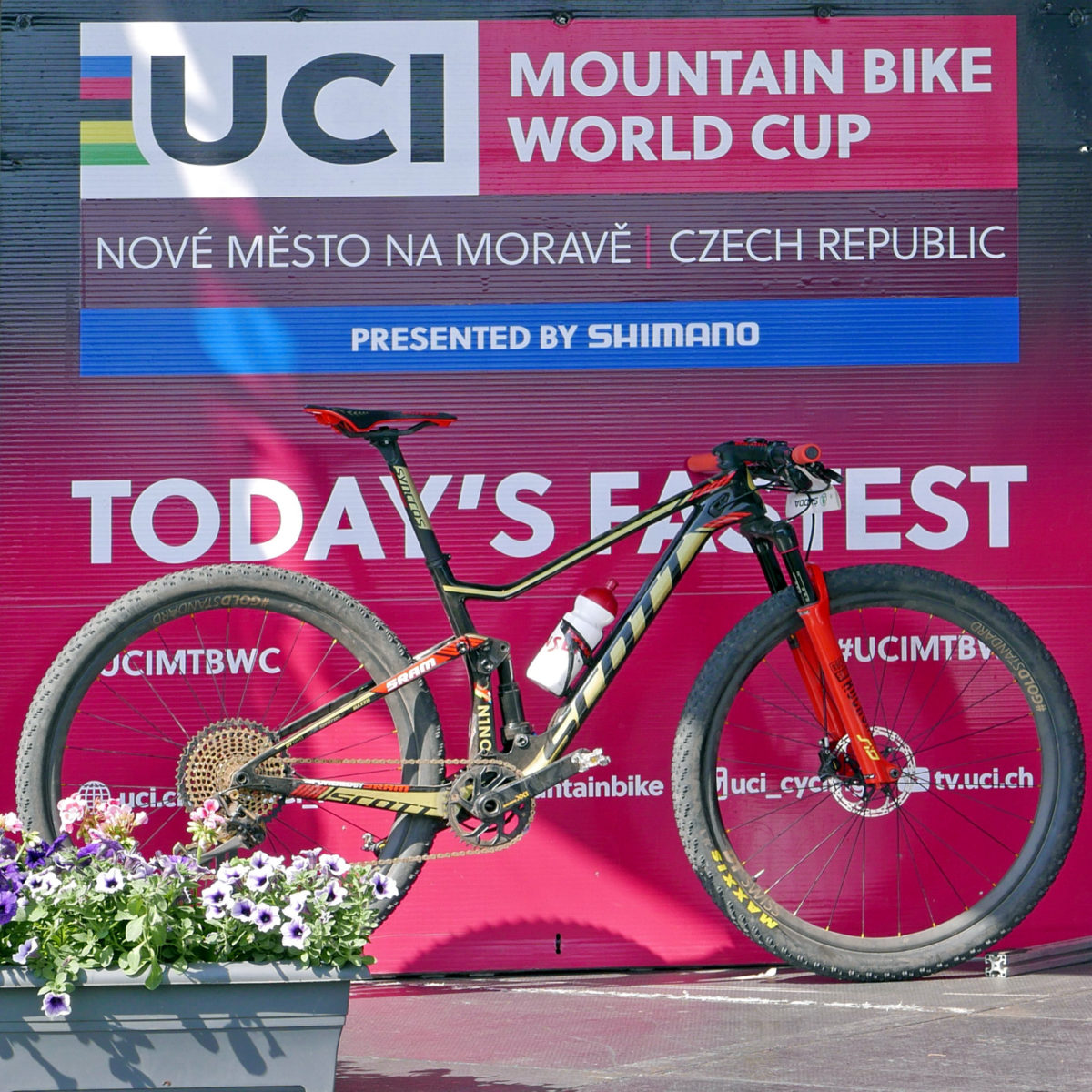 So another day of elite XCO racing done at the World Cup’s first round in the Czech Republic, and the World Champion’s bike is again the fastest bike of the day. 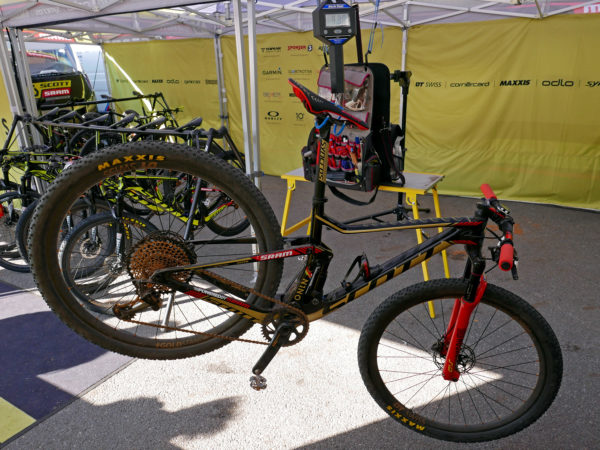 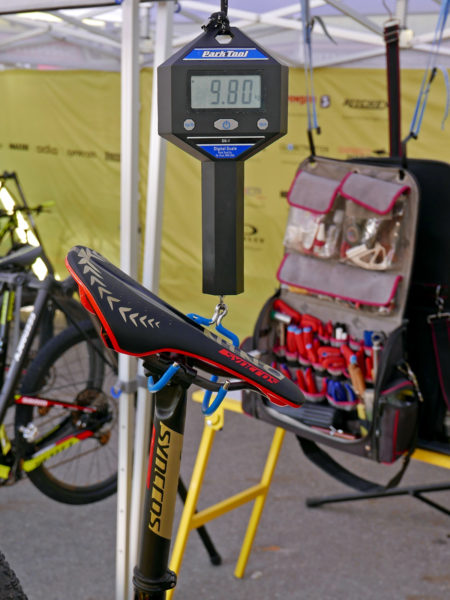 After the race, we had a chance to toss Nino Schurter’s Scott Spark RC up on our scale again (the same one for what it’s worth). Its been almost a year since we weighed his bike at Worlds, and there are a lot of spec changes to his complete build, but… All that didn’t seem to make too big of an impact. The bike weighed in at 9.80kg (21.61lb) – . That’s probably the weight of all of those palm leaves painted on the toptube. OK, reader Selu is right. That weight includes the 25g  Garmin. So yeah it’s actually 15g lighter than last year! 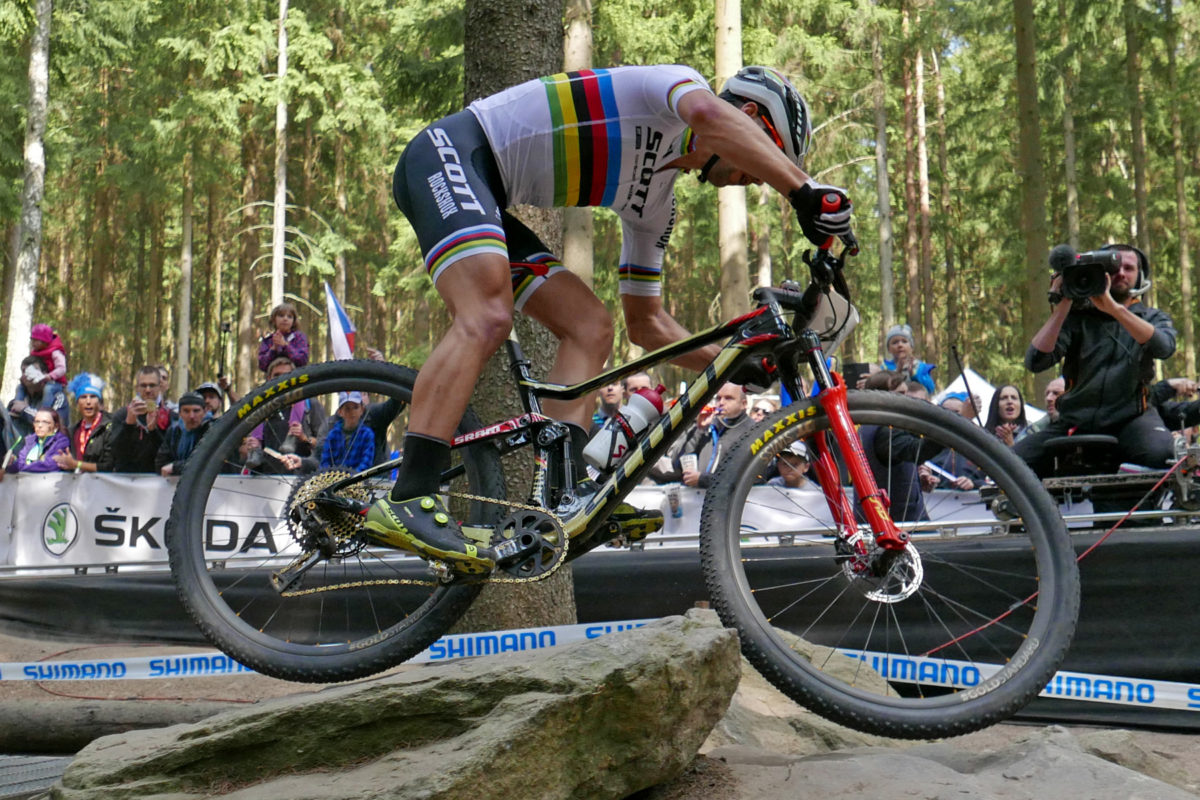 And with that we leave you with another rainbow-clad Elite cross-country racer tossing a lightweight carbon XC bike into some big rocks.

Didn’t he used to race on tubular tires? When did that switch happen?

I would say when he switched to 29er. I’m thinking of how this bike would smash all those gravel bikes while being tons safer and more fun to ride.

I agree about the gravel bikes. I don’t get it. I have a Specialized Epic that weighs less than nearly all the gravel bikes, has full suspension and way more dirt worthy tires and still pedals efficiently on the road.

Not sure what your Epic weighs, but Annika Langvad’s Sworks Era was weighed at just shy of 23 lbs in the other article – an equivalent stock build is around $9000. My alloy Raleigh Willard (stock except for a carbon post) also weighs 23 lbs and retails for $1500. I could throw some trick wheels on it and make it tubeless and it would probably come in under 20 pounds – and still cost less than a third of an Sworks Epic.

Why? My “gravel” bike weighs 5 pounds less and cost half as much. I had a 22lb full suspension XC bike and there is NO way that would have been faster in the gravel events I do now.

at the end of the day though it really depends on the race. on anything non-bumpy the suspensions are just weight as long as you can lodge a sufficiently wide tire in the frame.

The switch happened just before the Olympics last year. Apparently Maxxis pro only tubeless tyres had improved to the point that he wasn’t feeling any advantage with the Dugast tubs anymore. Switching to ‘normal’ tyres let’s him have a wider range of treads at each race and gives his mechanic fewer headaches if the rain comes.

where is best to watch highlights of these races?

RedBull TV has a replay now, no highlights yet but they will usually come out with one soon.

36t chainring? Bigger? Looks like it is scraping the chain stay occasionally. I had the same problem, had to go back to a 34, which kinda diminishes the appeal of Eagle… in my elevation-limited terrain at least.

38t chainring… I think Scott designed the bike around using that size ring.

9.80 kg with Garmin Edge 25
9.79 kg without Garmin 25…
The current bike is lighter than the previous one (at least for the photos of the article)

Eds.: Ha, you are correct! We missed that the Edge was still there. The new bike is 15g lighter. See the update in the text above.

38t or 36t chairing + Eagle. Couldn’t you jump back to XX1 11 speed and shave some grams. I get that Sram is a title sponsor and they want him running the latest gear but I’ll bet Nino never hits that 50t cog in back.