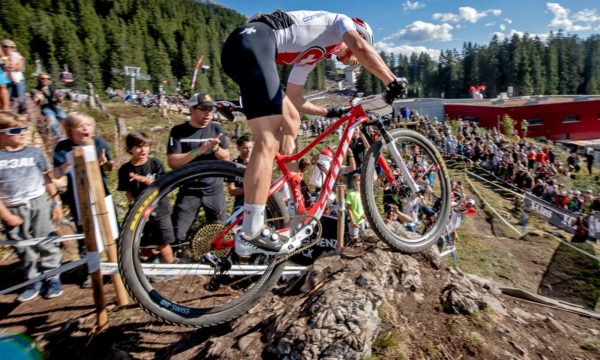 As many times as we’ve gotten an up close look at N1NO’s Scott Spark RC 900 bikes, this custom painted version still has some interesting bits to share, including the first real mention by SRAM of the ‘XX1 Eagle Black Box‘ wireless eTap rear derailleur. After seasons of dominating XC racing, it isn’t a huge surprise to see Nino Schurter taking another win on home Swiss turf at the Lenzerheide World Championships. Take a closer look at the Switzerland themed bike and its ‘Black Box’ components. 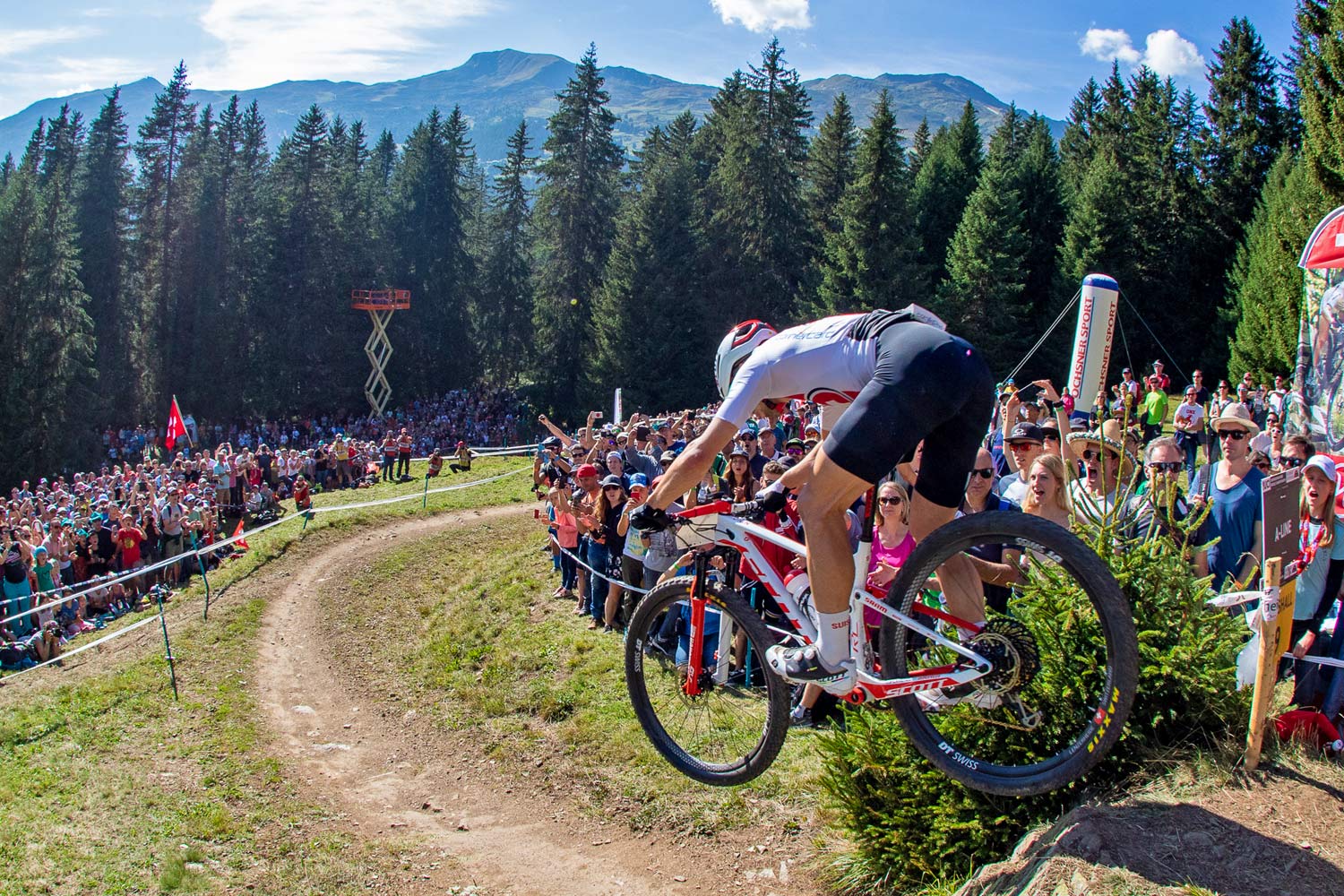 So yeah, Nino defended his World Champion title for the fourth year in a row over the weekend (making it his 7th World title.) 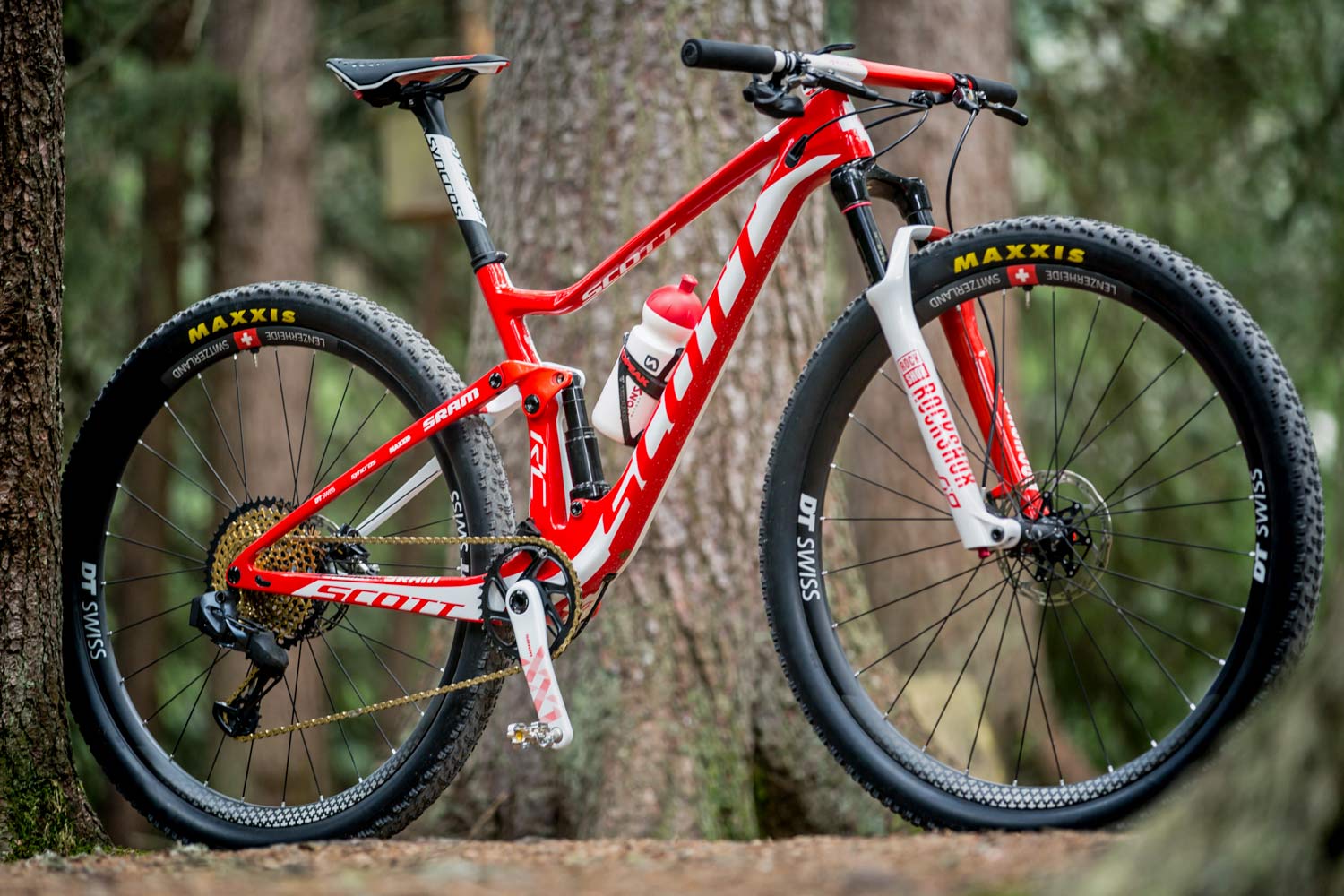 But we’re here because he did it on a sweet red & white painted bike to commemorate racing in from a home crowd in Switzerland. Oh and because his bike is decked out in some nice SRAM Black Box tech. 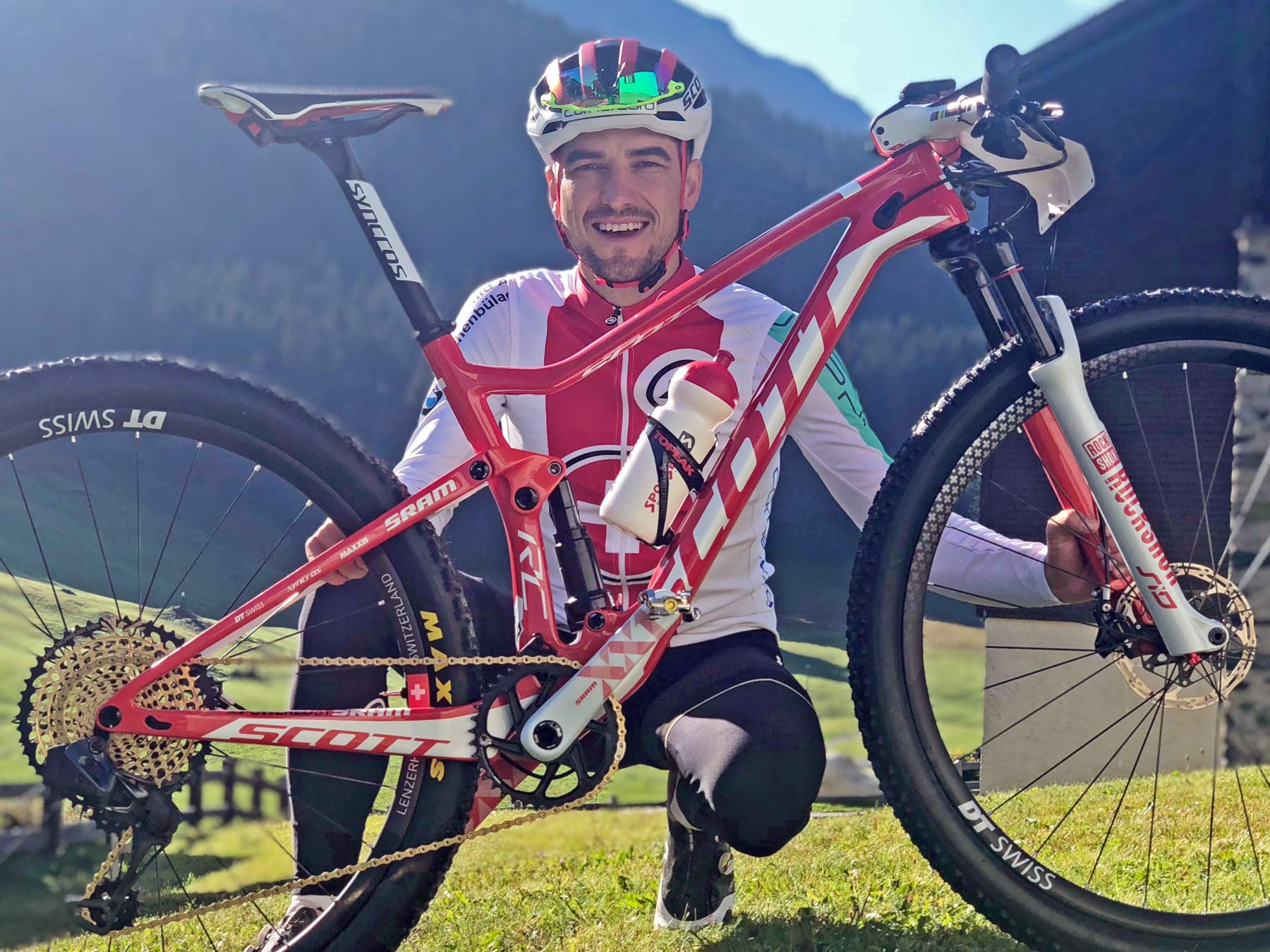 Nino’s frame itself appears to be the same 100mm travel Scott Spark RC 900 with hi-mod  HMX carbon that we’ve seen him take at least his last three titles on. 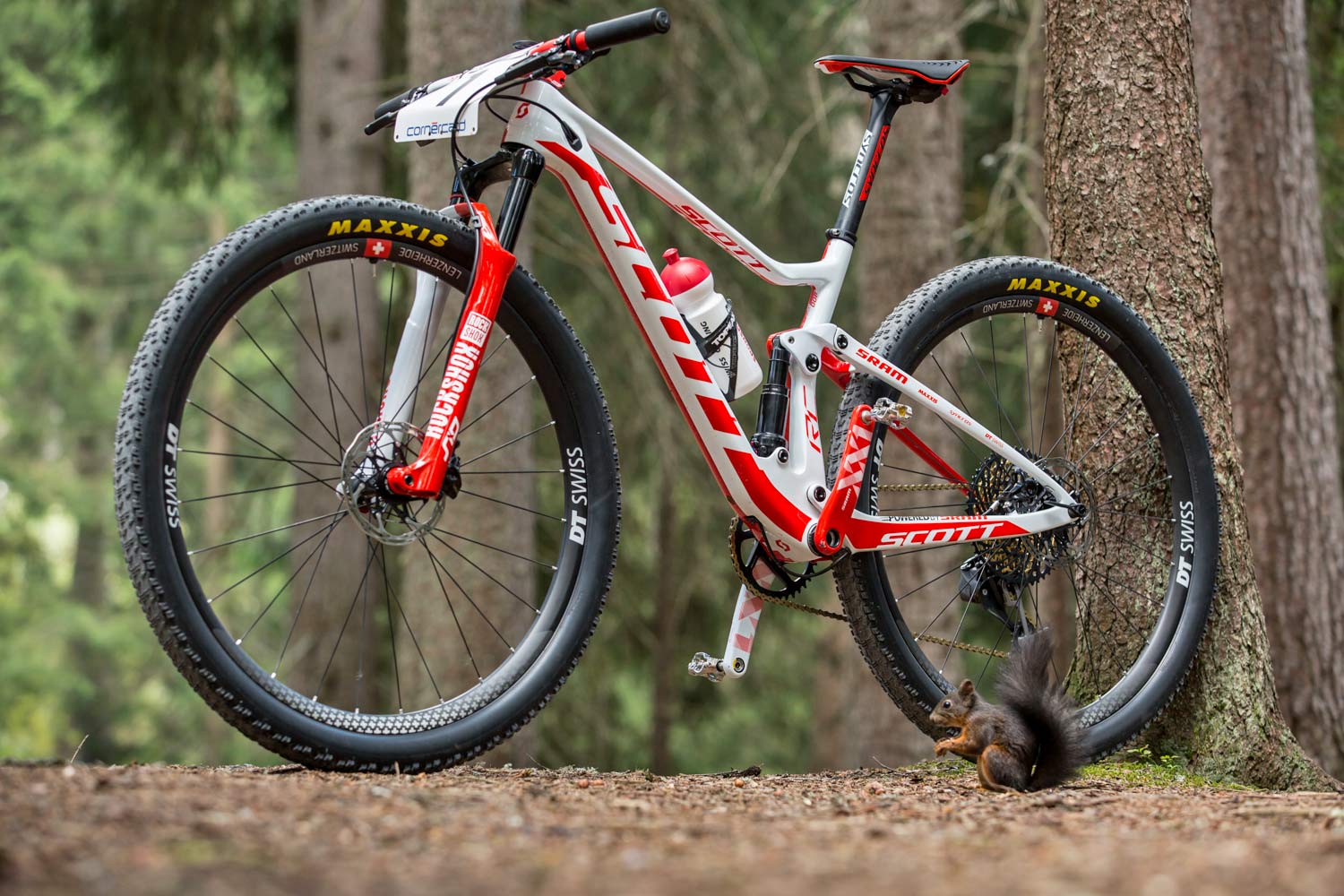 That’s not to say that it isn’t one of the lightest (and of course fastest) bikes on the circuit. Scott says his frame weighs just 1779g with the rear shock and all of the hardware, and is just 9.86kg/21.74lb ready to race with pedals. That sounds reasonable as we’ve weighed it a few grams even lighter than that in recent years, depending on small spec changes (although we didn’t get a chance to hang his eTap equipped bike this season.) 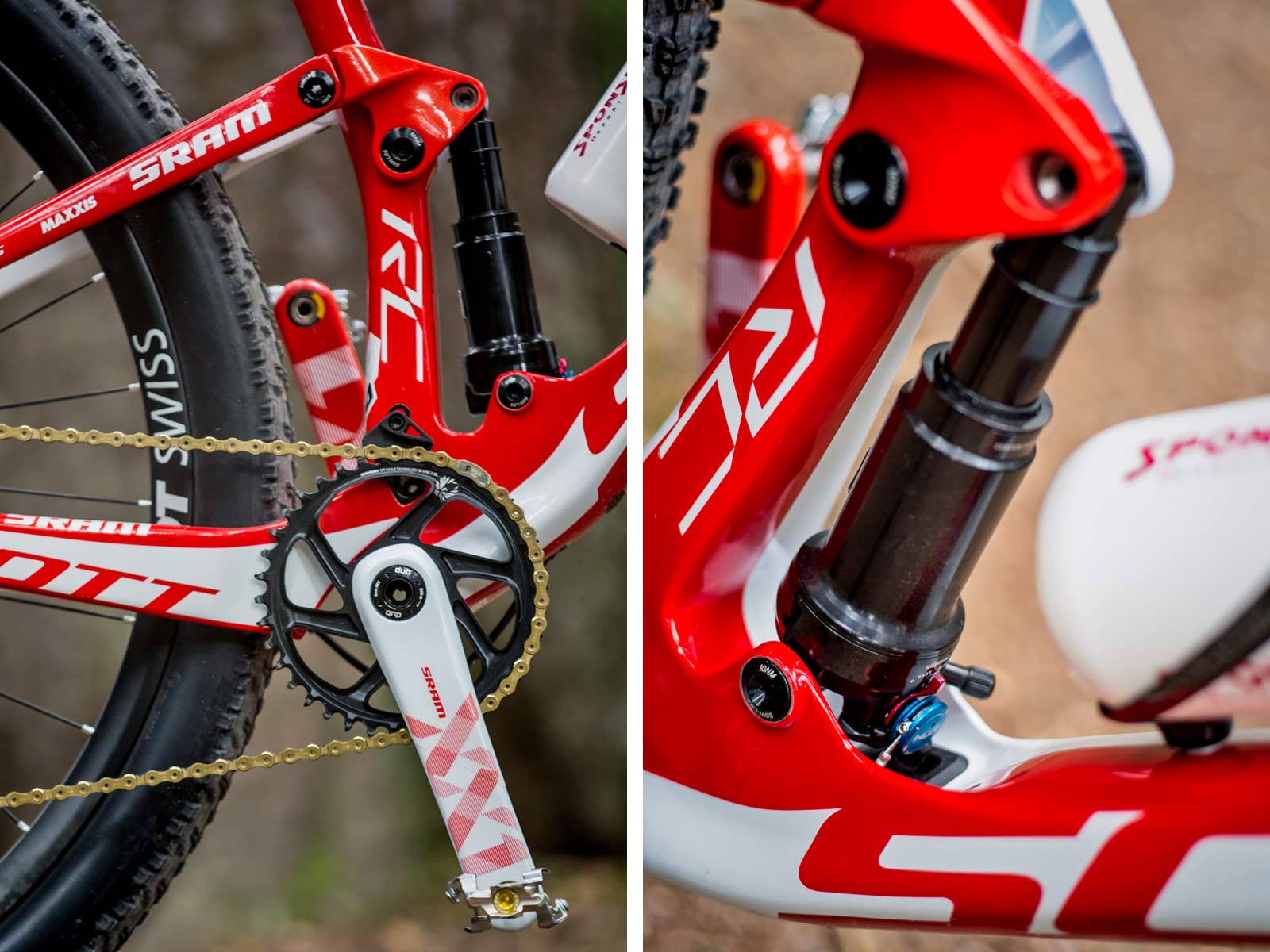 Interestingly Scott says the “heart of the frame is the Trunnion mount”, sinking the shock body deeper into the frame pocket for a longer shock stroke within the same eye-to-eye length. They say that helped develop the compact suspension layout. But team sponsor SRAM’s RockShox shocks don’t yet fit in that pocket it seems, at least not one that will also work with Scott’s newest TwinLoc and uses two positive air chambers. Once Nino left DT Swiss suspension behind two seasons ago, he’s actually been racing with a Fox shock to get the fit and lockout functionality he needs. The team may officially call the rear shock “Black Box”, but it still looks a lot like a de-badged trunnion mount Fox Float shock to us. 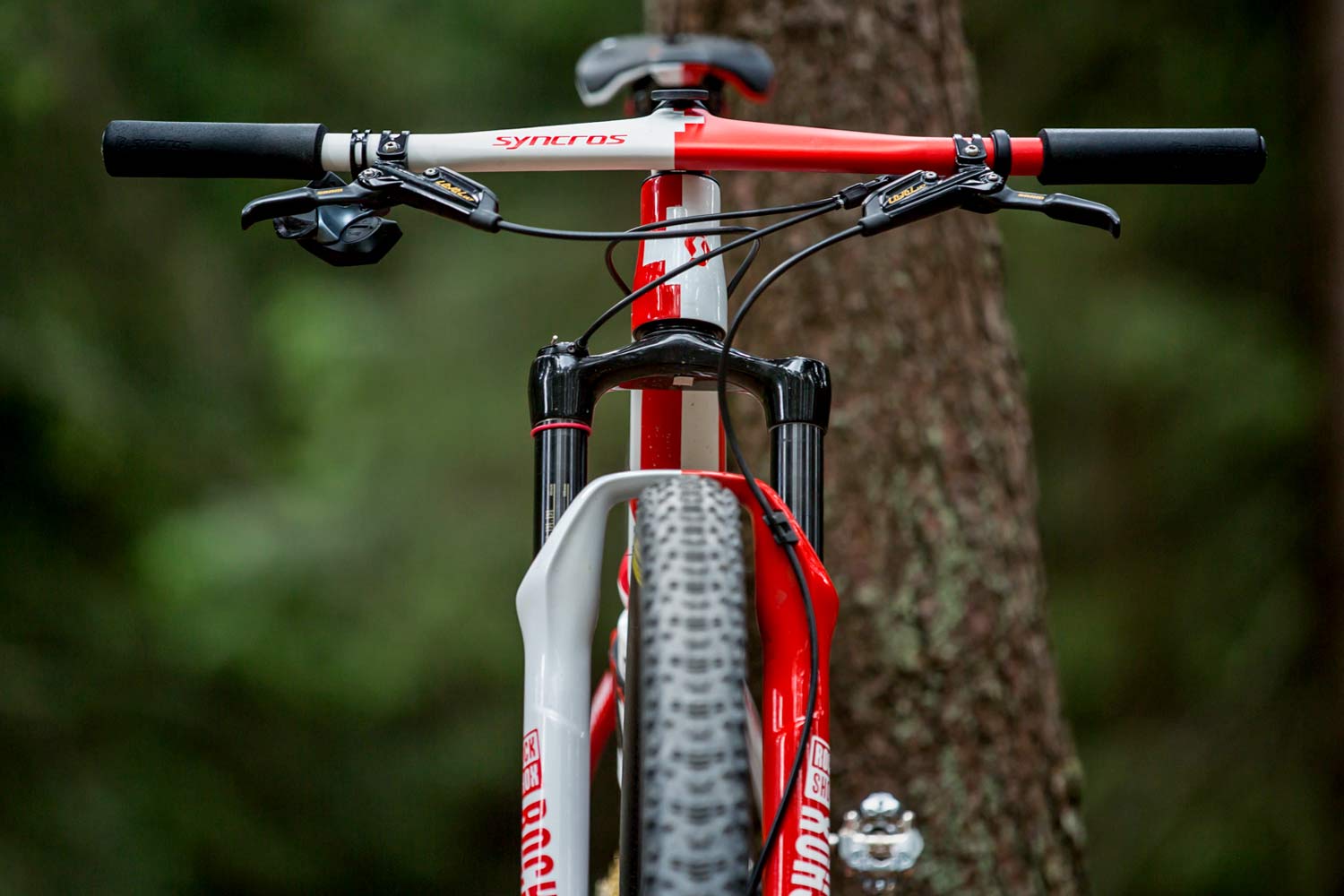 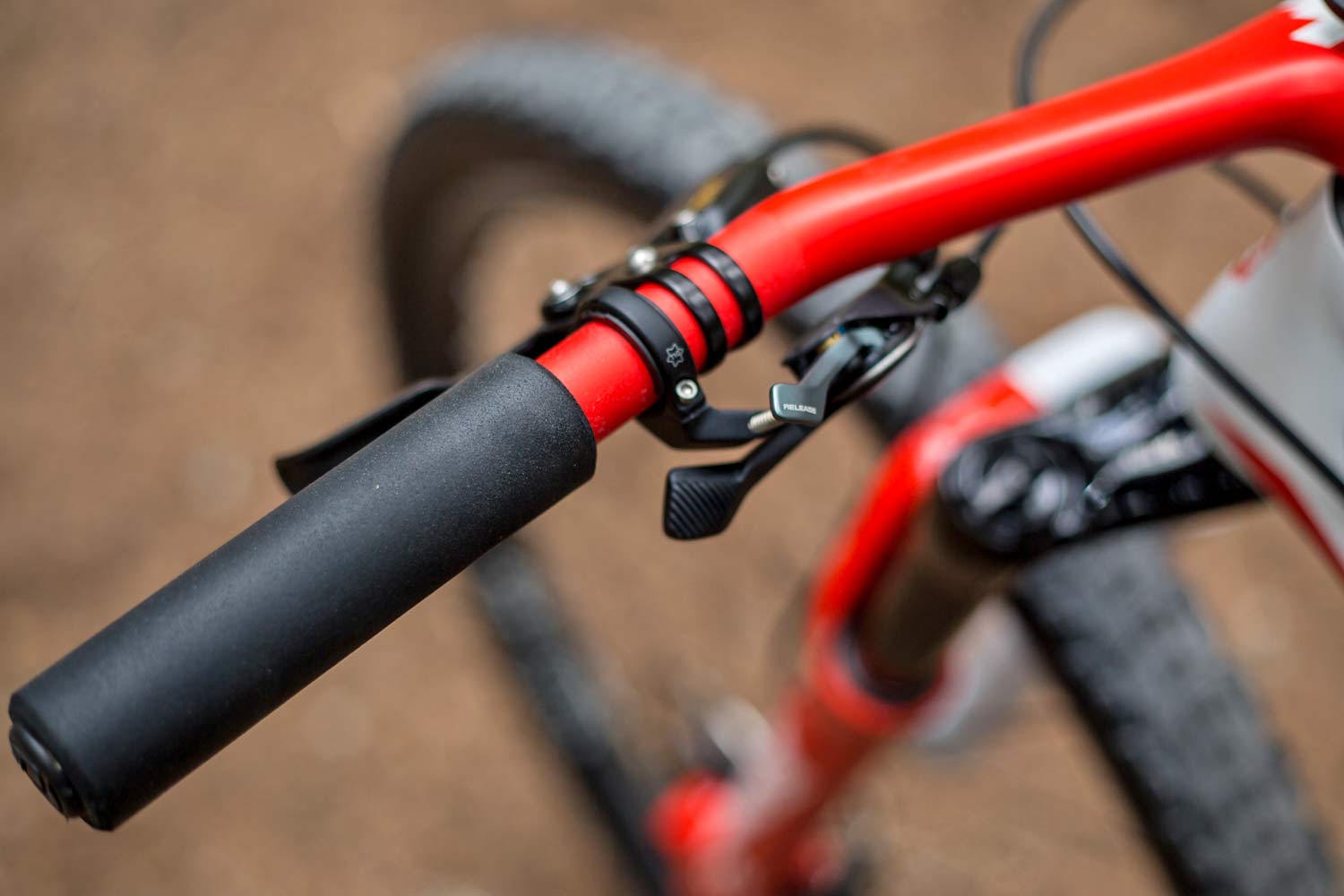 More than just a pro tune, it gets a custom RL3 Charger Damper that has been developed to have three compression damping modes to work with Scott’s own TwinLoc remote: open Descend, a reduced travel & higher progression Traction Control, and full Lockout. 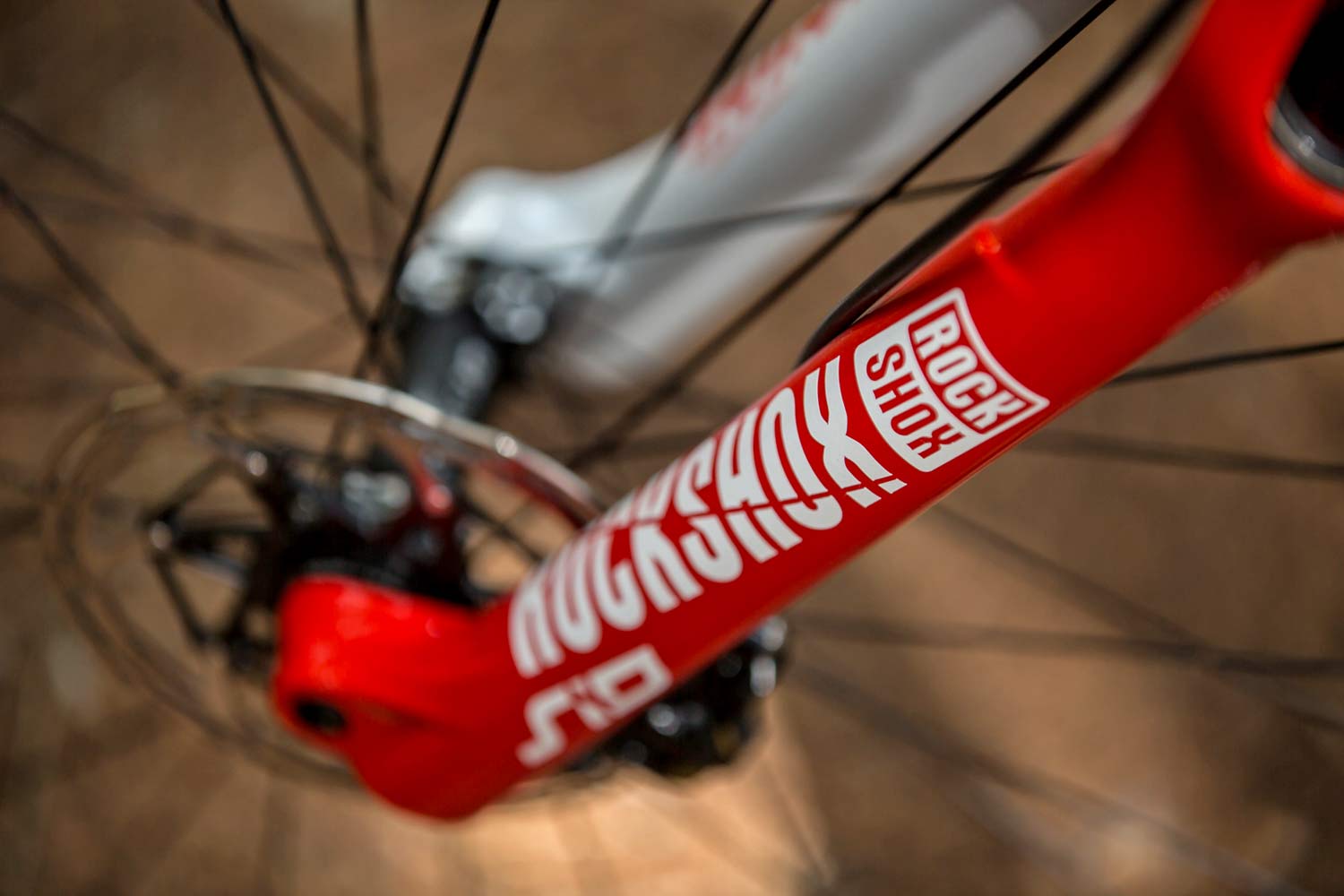 Otherwise the chassis of the 100mm travel Boost fork is unchanged besides the two-tone paint. 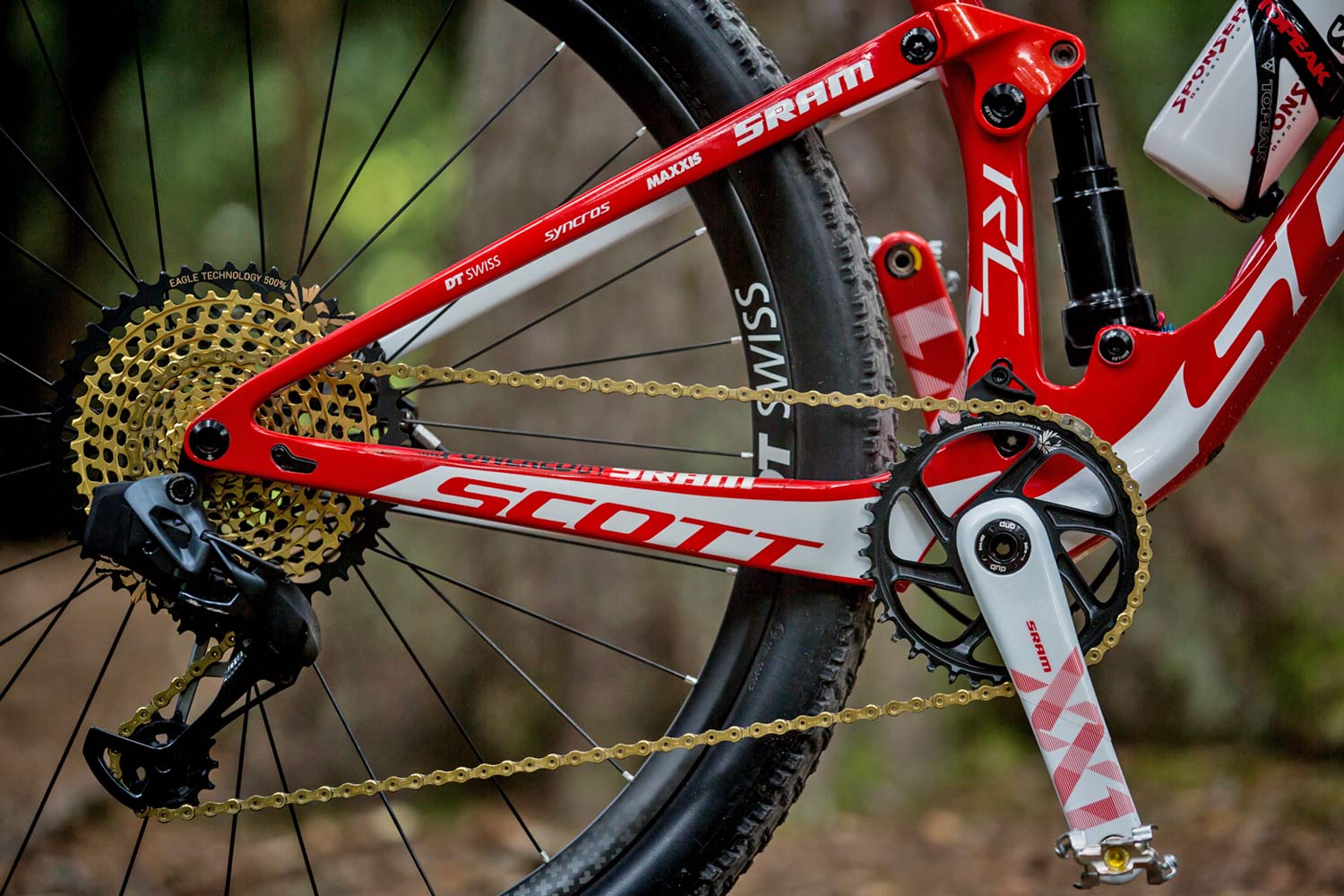 The team has no given us the first official mention of the eTap Eagle wireless mountain bike drivetrain, calling it “SRAM XX1 Eagle Black Box”. It is still the same wireless 12-speed 1x mountain bike drivetrain that we broke the news on back in March, and then got a more detailed look at in May at two weekends of World Cup racing. SRAM doesn’t seem to be letting out any more info than the ‘Black Box’ moniker. 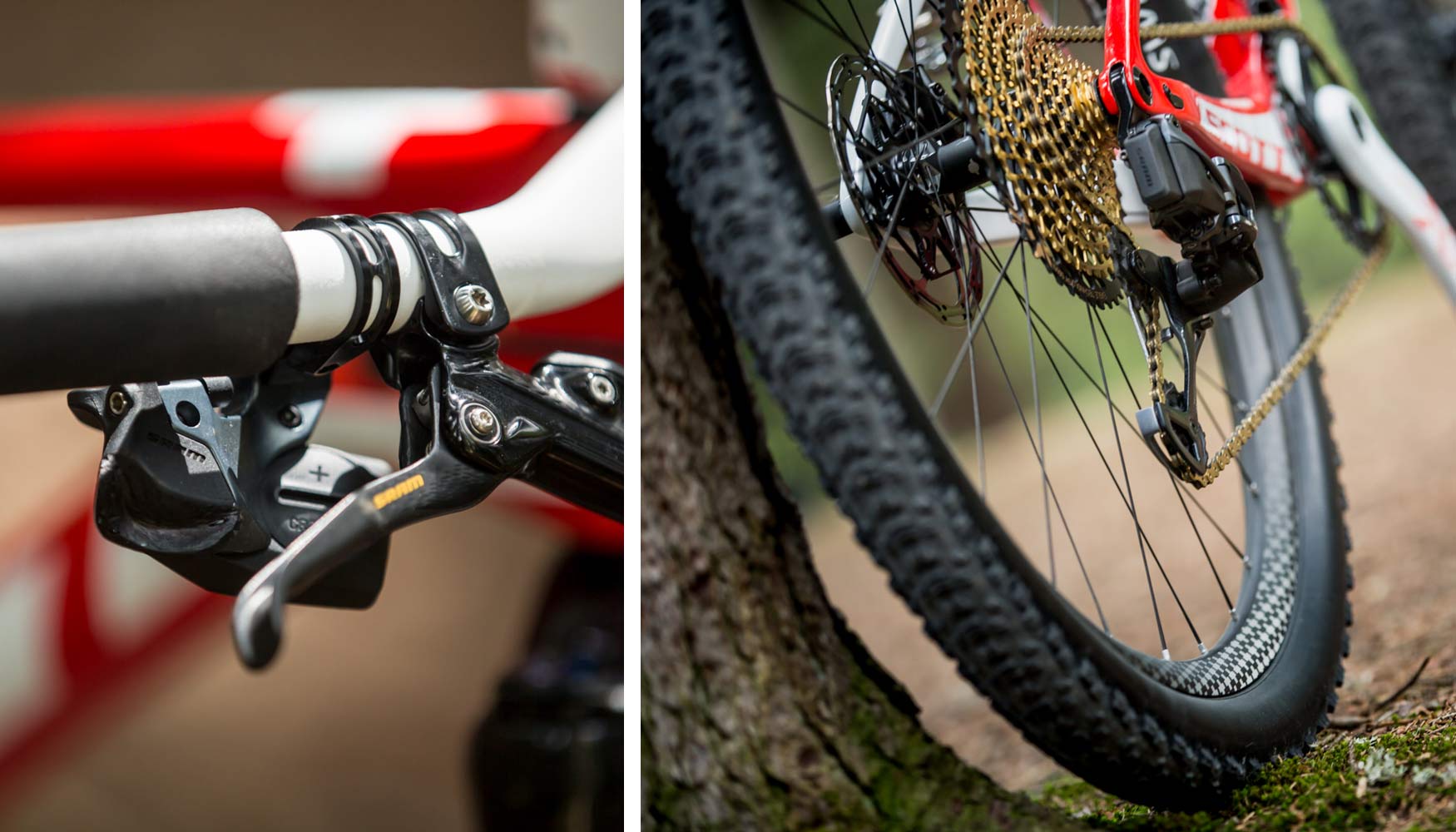 But the wireless shifter & rear derailleur do certainly look refined and ready for production, with no noticeable change since what we saw in May.

Outside of the derailleur & shifter every other part of the drivetrain (cassette, chain, cranks, chainring) seems to get its standard naming, so likely the eTap Eagle parts will be the only elements needed for a wireless conversion.

The rest of Nino’s bike is pretty much the same as when we last saw it, albeit in this left vs. right red and white Swiss paint scheme. The new Fraser iC SL one-piece bar & stem gets the unique alternating paint job (and cut down to 680mm wide), as does the carbon XX1 crankset. 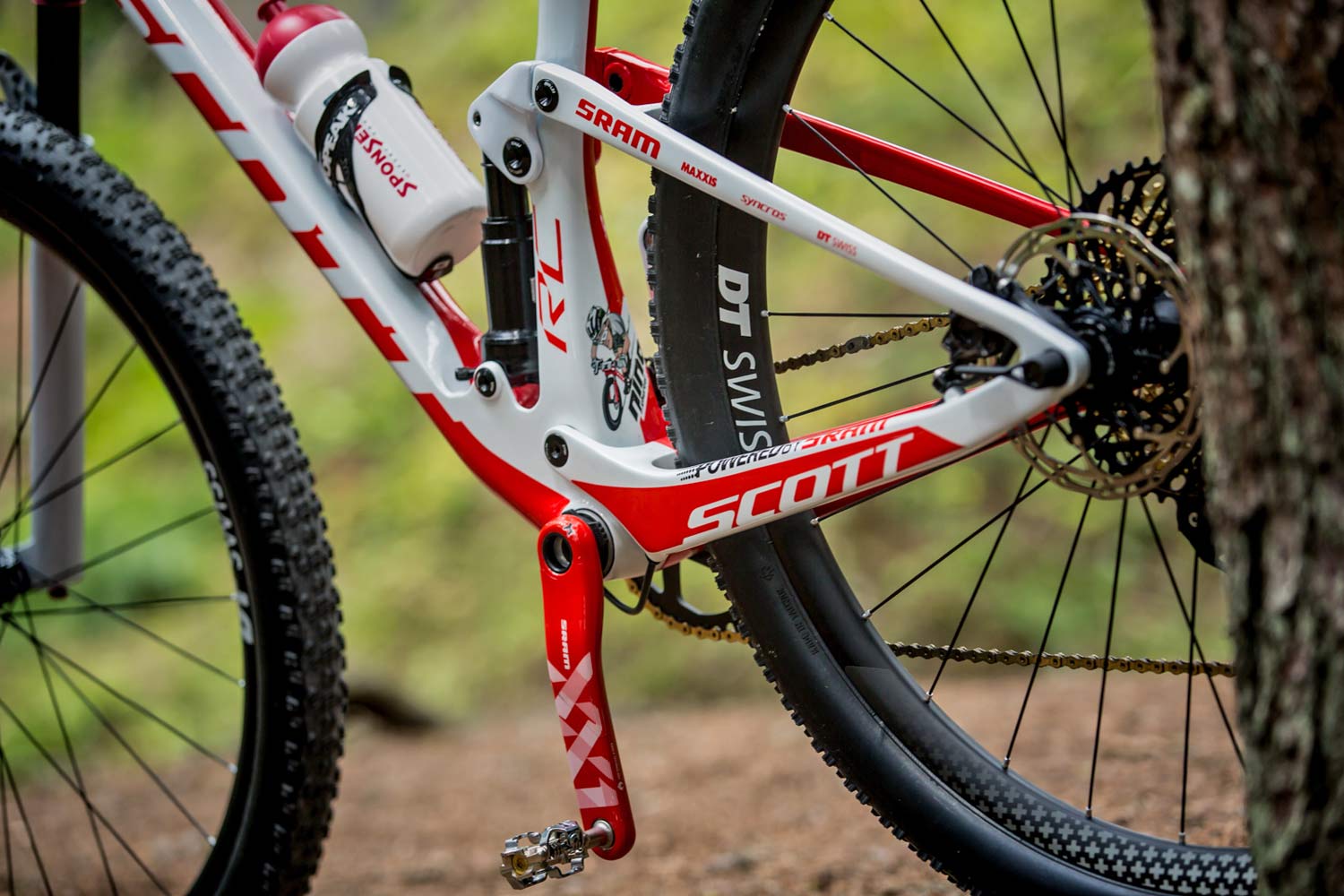 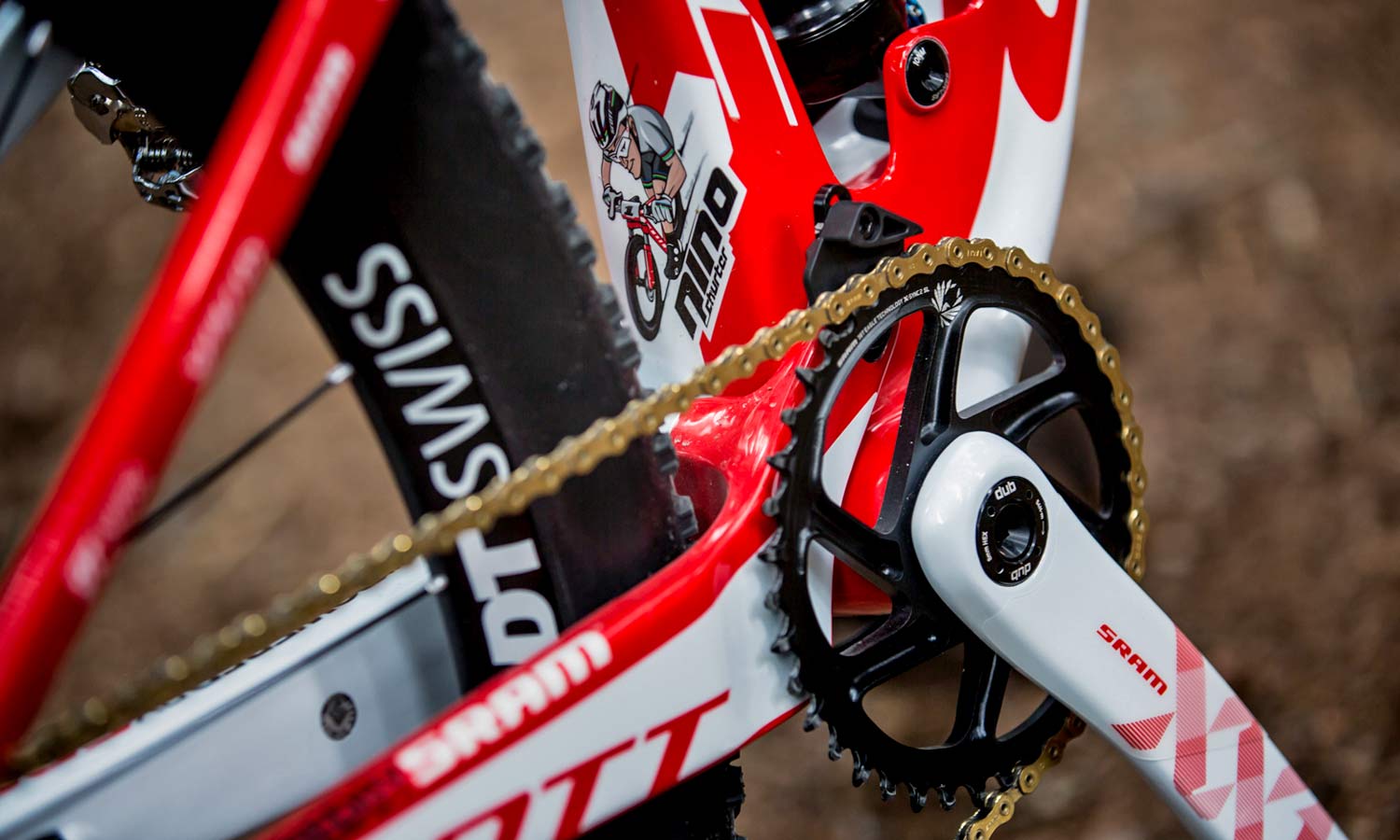 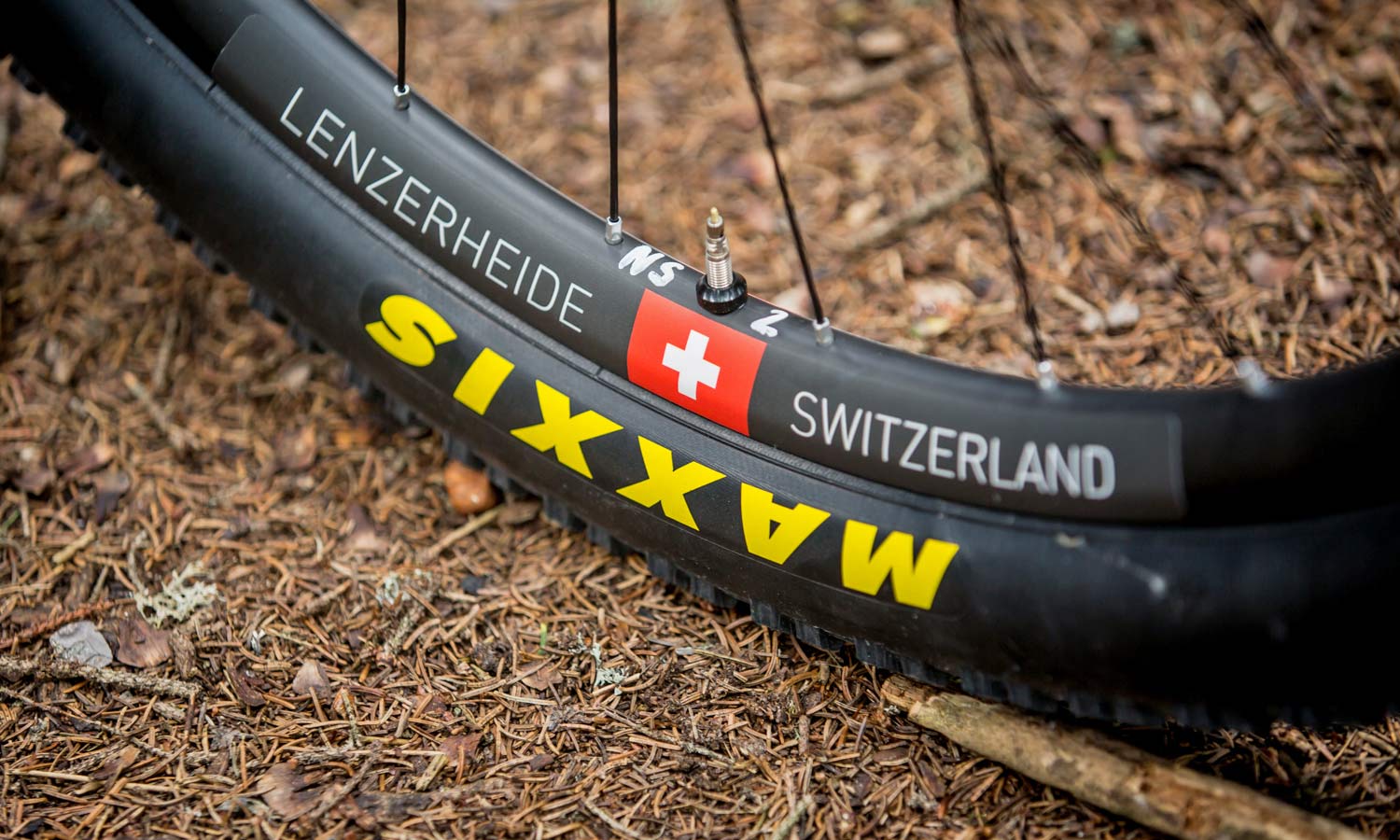 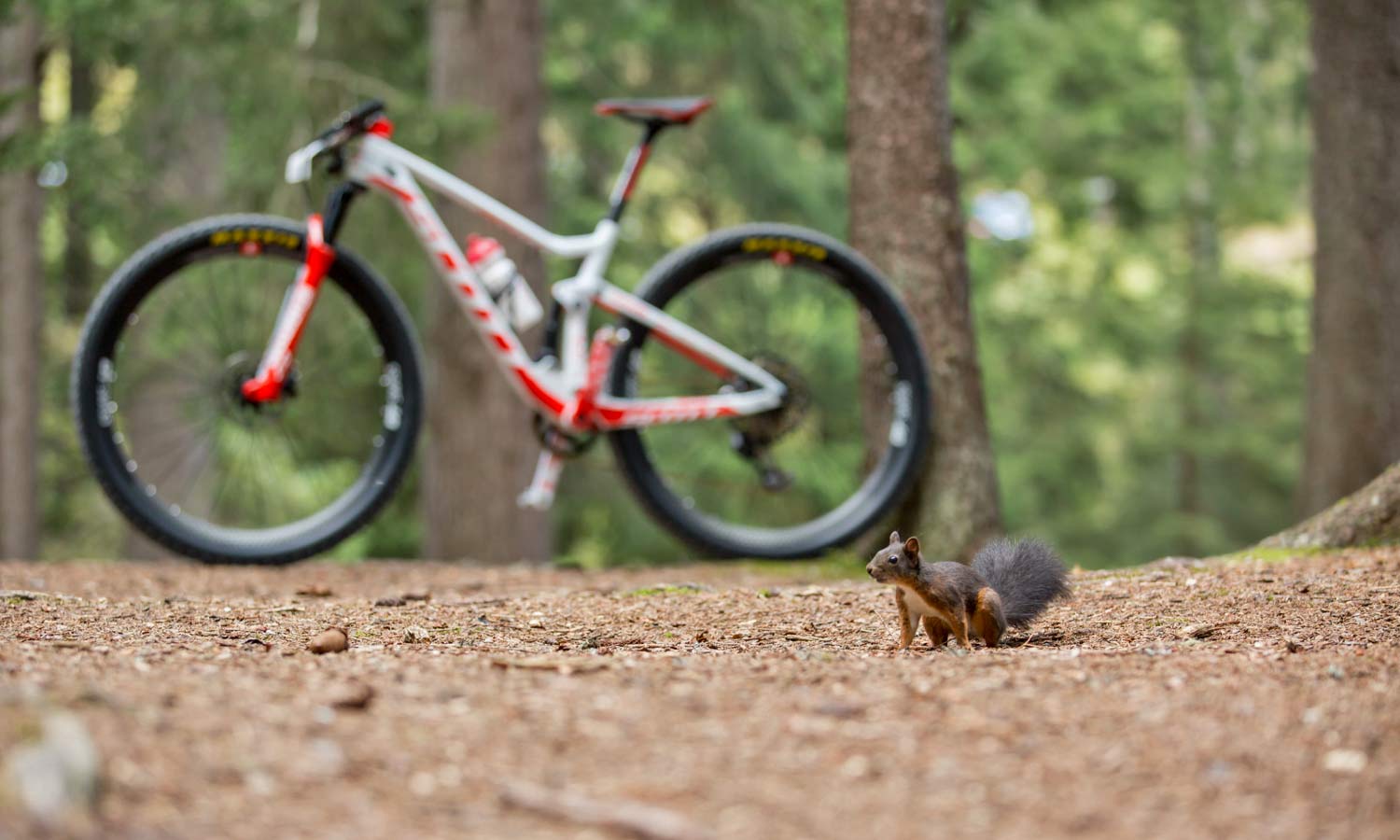 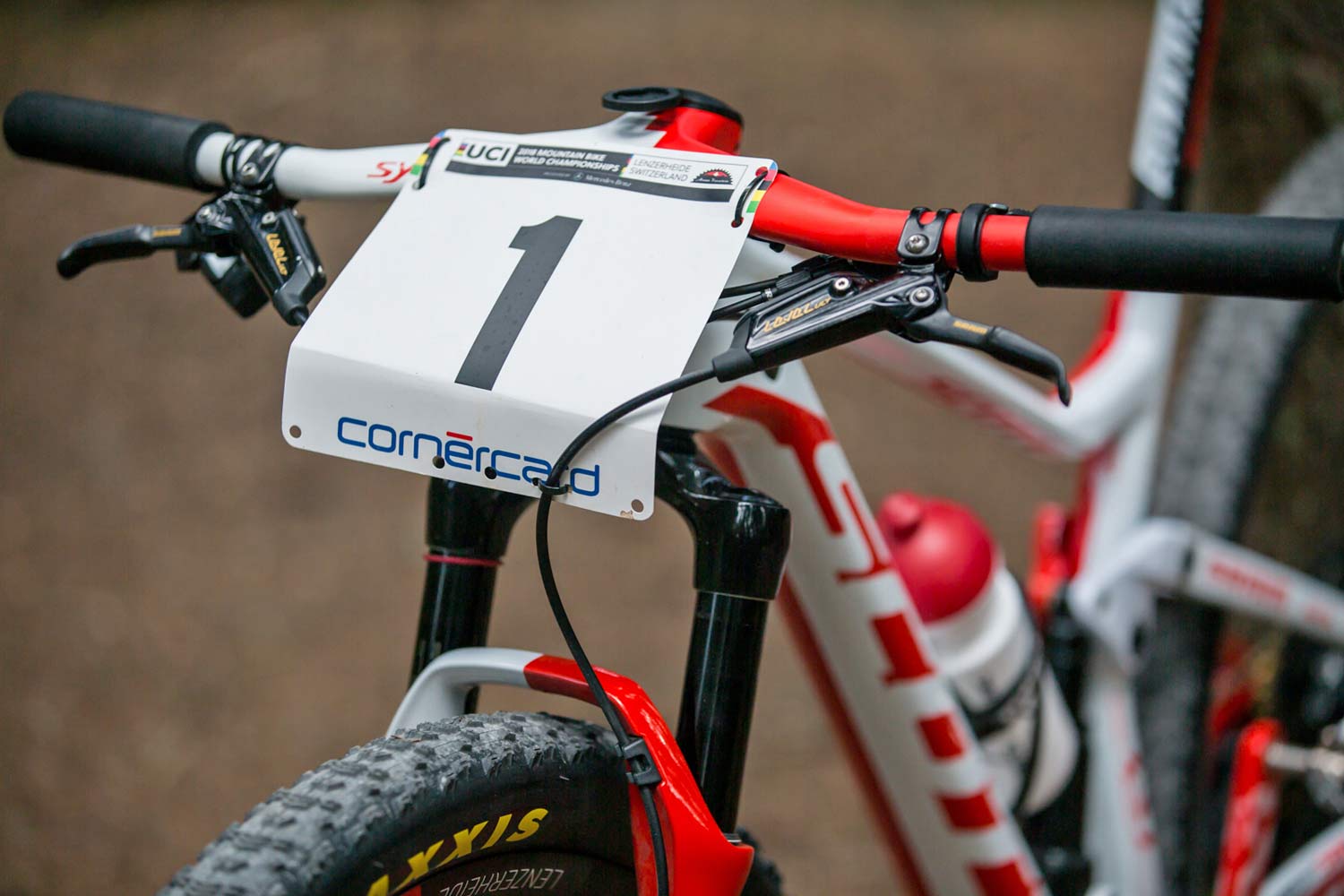 Then, Syncros provides all of the rest, including the saddle, seatpost, headset, grips, and even the integrated stem cap hanger for Nino’s Garmin Edge 20 GPS. 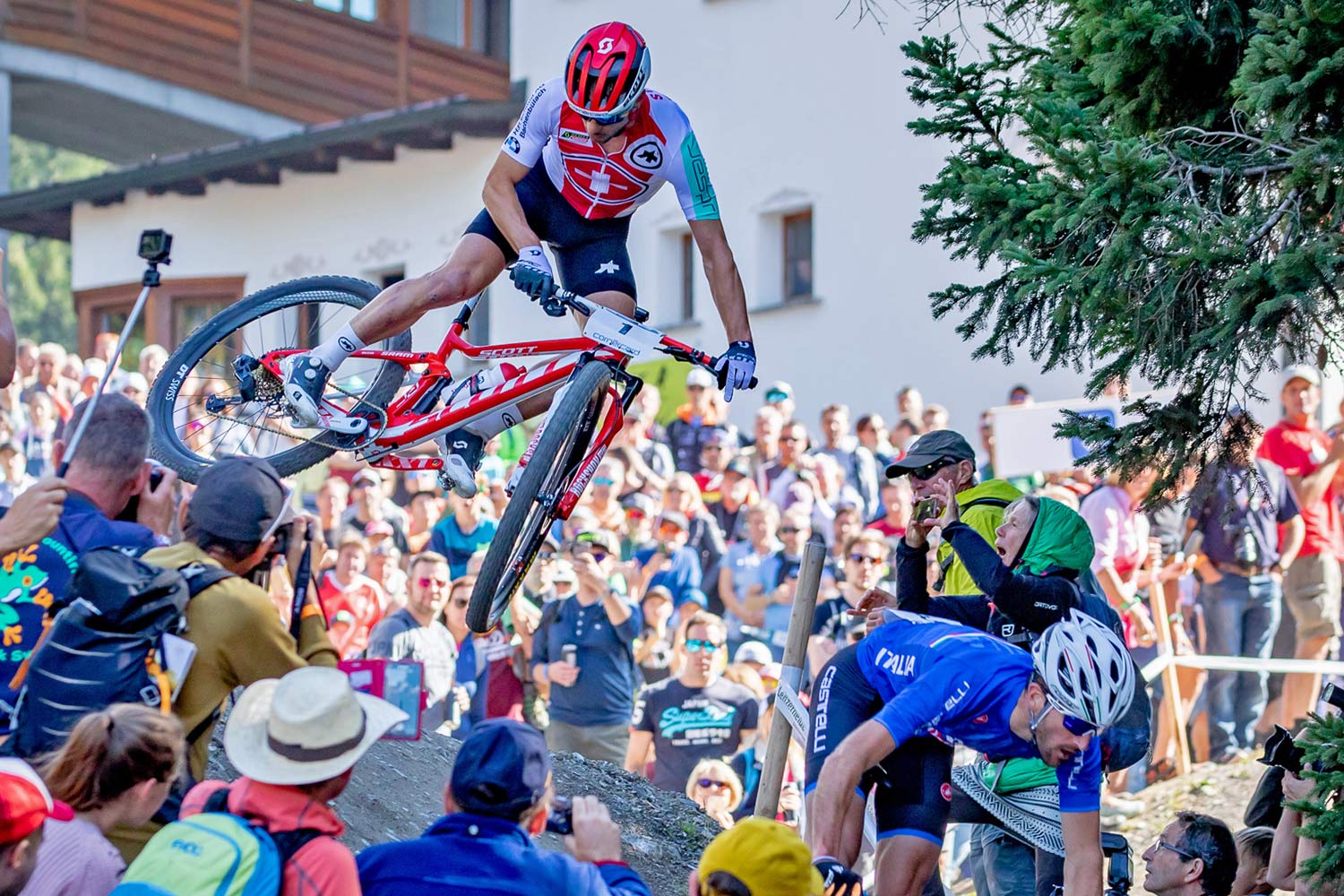 No one noticed the new chainrings? Definitely slimmer and lighter. Synter

That bike! Awesome build it must be fun to ride on fast courses. One thing, Nino will win on almost any xc bike. Try putting me on it; )

That is an absurdly beautiful bike… bravo. I’m interested to see how the “BlackBox” or wireless Eagle or whatever it’s called works. The idea of having a fully rigid frame for daily training and a full suspension frame for longer training days and racing along with a single set of wheels and a single (nice) groupset that could be easily swapped is very appealing.

why would you want to train on a rigid frame?

Less maintenance and better skill development. The rigid frame could also double as a gravel assuming you could get a big enough chainring on the front. My F-Si supposedly maxes out at a 36 but I suspect I could get at least a 38 on there.

I think I misunderstood your comment, which isn’t rigid specific. You just would like to swap rd and wheels between otherwise built frames.

not to mention the lady in the last pic.

680mm bars… Sounds like the pendulum is finely starting to swing the other way.

The bike used in the race is NOT running etap. It can easily be seen in the fist picture. Nino Schurter decided not to run etap because of reliability issues – he already lost few races because of malfunction.

I wonder why sram keeps insisting with this – they can’t find a decent road team to sponsor anymore – the stuff doesn’t work.
#eTrap

@pinko, I’m not sure what you are seeing (the right brake line? maybe the shock lockouts?), but all of the race photos show a wireless rear derailleur and a wireless shifter pod next to the right grip. Nino did have some problems during racing this season with prototypes, but still every race bike we’ve seen him on has had the latest eTap Eagle MTB prototypes.

@pinko Wrong. There is no rear derailleur cable in the first pic (look again) or the last pic which was at Worlds and is much clearer to see. He only had pull out of the short track of the first race in South Africa last year. Get your facts straight and stop with the SRAM hate and lies. Nino ran eTap all year and destroyed everyone and won Worlds with it. I’ve been using eTap on my road bike for over a year and it is AWESOME, have not had one problem. I will be buying Eagle eTap ASAP.

Scott seems to build an mechanical equivalent as there are pictures of it. Maybe as a back-up. Actual race pictures show e-tap.

But I’d like to think of the more viable vast marketing conspiracy involving team personnel, racers, and the entire media who alter race photos by removing excess mech cables and adding a battery to the RD prior to publications. Race attendees’ silence is paid off with free sram chains and enforce with sram 12 spd chain beatings

It’s those rainbow masterlinks that hurt us journalists the most when we slip up! 😉 Oh no, I’ve said too much…

Nino used the eTap rear derailleur since Stellenbosch and also used it on his bike for Cape Epic. It’s been fitted for every xco race since

I thought it is a polish rider bicycle