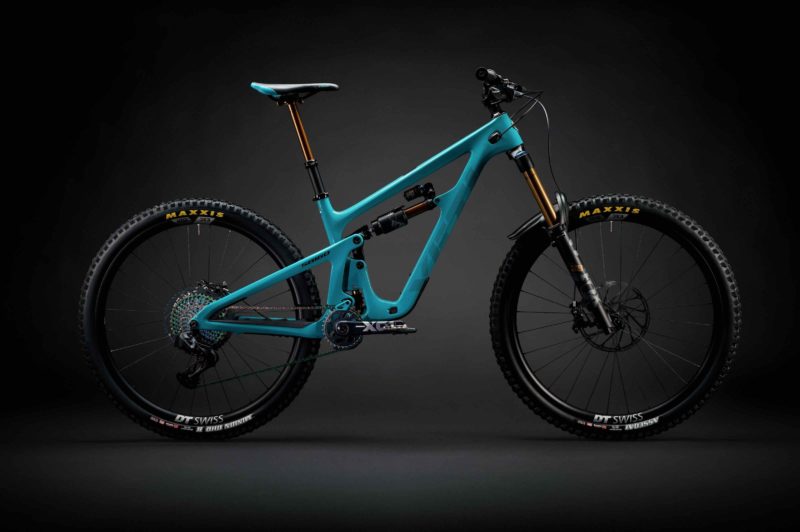 In the past four years, a lot of brands have made exceptional enduro bikes. Across the industry, a rethinking of geometry made bikes of all travel more fun on descents, and new geometry norms made bigger travel bikes climb better.

Yeti’s SB150 was at the top of its class for its stable, confident, plush descending and its ability to climb without the suspension bobbing around. Today, Yeti’s SB160 improves on the 150 and replaces it in Yeti’s line. The SB160 is the culmination of a laundry list of refinements. It’s the most evolved bike Yeti has ever made, and a bike that will pleasantly shock you with its intuitive handling (it knows what you’re thinking), its silky suspension, and its total capability in chunky, fast terrain, whatever speed you’re rolling. When the trail is unpredictable, this is the bike you want to be on. 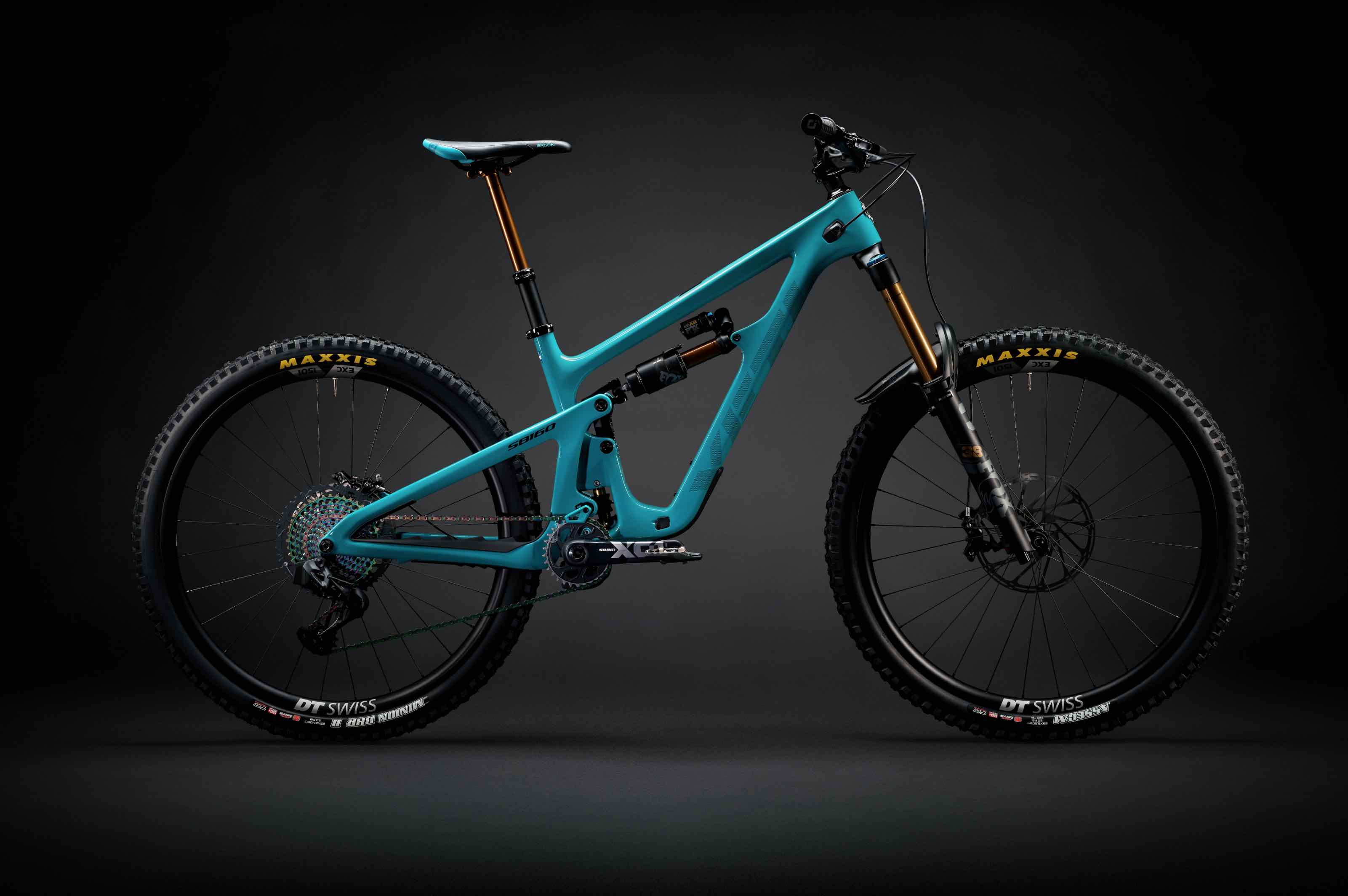 In designing the SB160, Yeti’s Director of Engineering, Peter “Stretch” Zawistowski, says his engineering team and Yeti’s race team put together a laundry list of every possible element of the SB150 that they wanted to change or keep.

“Since we knew the core of the bike and how the suspension works, instead of having to figure that out again, we were able to focus on the nuances,” said Stretch. “We were happy with the geometry of the SB150, but we knew we could improve it.”

The pandemic paused bike production due to a shortage of parts, which gave bike designers and engineers a chance to slow down and fine-tune. So did changes at Yeti, which grew its engineering team to 11 people, added an assistant product manager for bikes, and equipped its suspension master, former World Cup racer Dave “DZ” Ziegman, with a state-of-the-art suspension lab.

“We released the SB130 and SB150 in 2018, and four years later, they’re still relevant,” said Stretch. “It put us in a position we’ve never been in, where we could take everything great about those bikes and focus on how to make it even better. “ 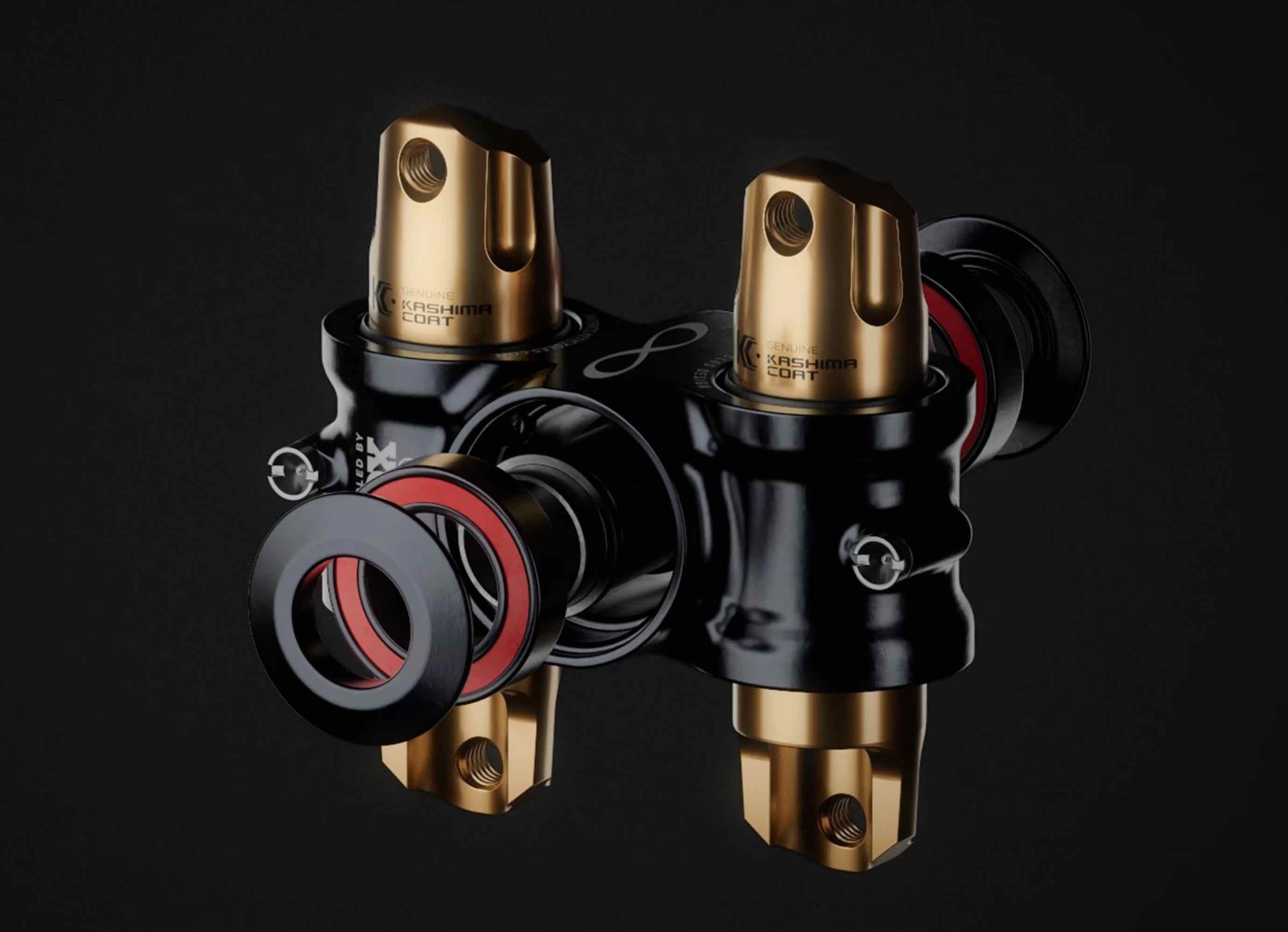 Starting with the SB130 and SB150 as their base, Yeti fine-tuned the Sb160’s flex with data from its test lab and decades of aggregated qualitative and quantitative race feedback and demo rider data on bike feel. They lowered the friction in the suspension and gave the bike a motocross-inspired tune that delivers compliance as well as bottom-out resistance.

Yeti stiffened the frame where they could and trimmed it down too. Round tubes took on a slightly ovalized shape in some areas. They refined the main frame and swingarm silhouettes, packaged the Switch Infinity and shock linkage in a tighter, more efficient unit, and added impact clearance by changing the slope of the downtube and raising it 35mm, while making the chainstays higher too.

Every size of the SB160 was individually engineered to be stiffer without being harsh. Yeti spec’d new lighter hardware, not lighter rubber to achieve their weight and durability goals, which include spec’ing a bike that a rider can pedal out of the shop without swapping parts.

With the SB160, Yeti also introduces a recalculated Switch Infinity that’s more durable with less friction. A new center hub with dual dust caps captures the bearings. The super strong central core has improved corrosion resistance and uses black oxide steel-backed Fox bearings and steel-backed bushing with an enhanced glide surface. The custom bearings are gone, making it easier for any dealer to service. And if you’re not quite ready to buy a new bike, don’t stress. The new Switch Infinity is backward-compatible with existing frames, and it will also be sold separately. 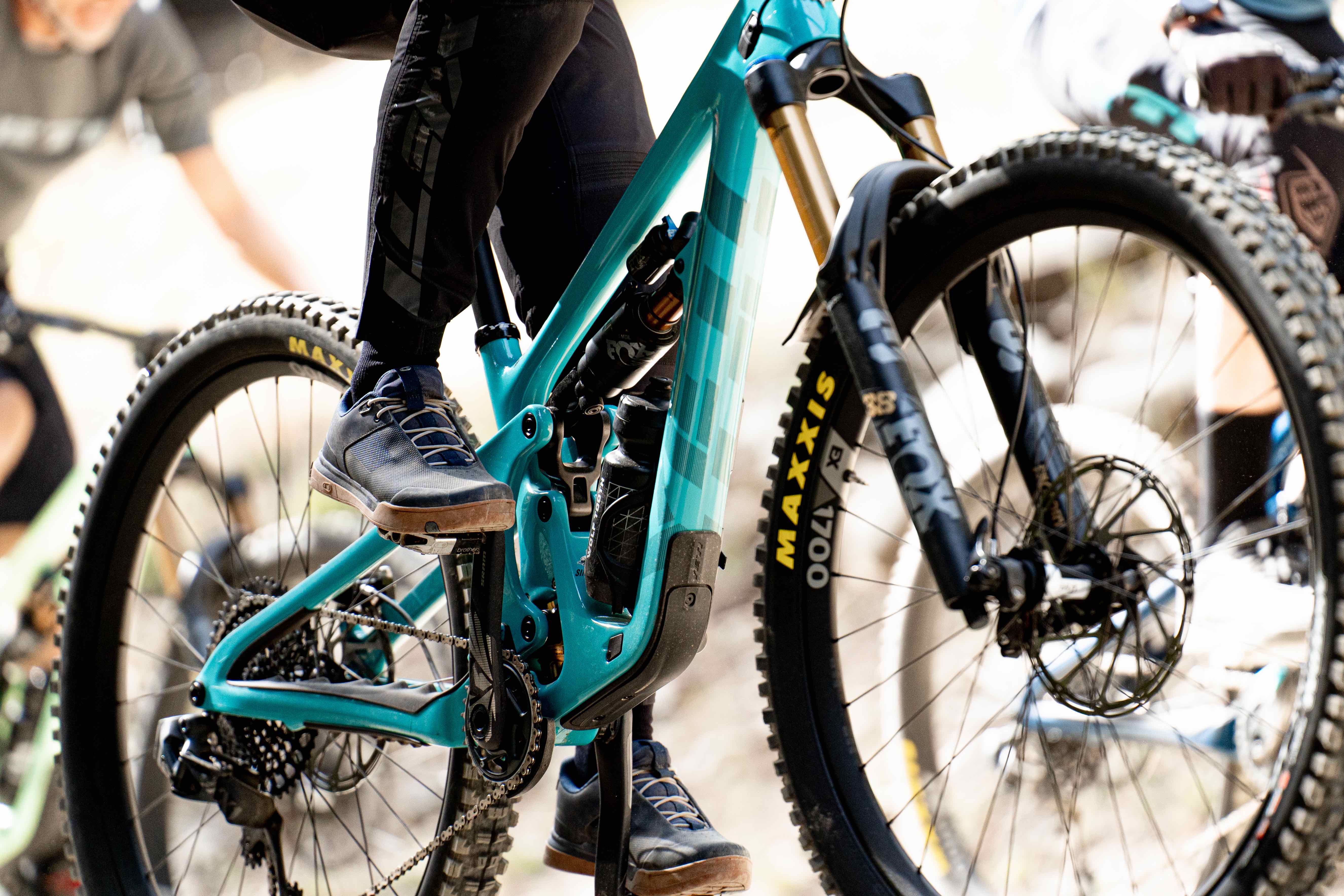 All of the 160’s pivot points now use 100% standard-sized bearings pressed into precision-machined floating collet axles in the linkage assembly, not the front triangle or swingarm. The floating hardware system is fixed on the drive side. Spacers on the non-drive side are supported at the pivot points. Bearings are all moved into an aluminum link for easier access. The new design increases serviceability and insanely reduces friction on all pivots for perfect alignment and smooth suspension motion.

One goal with the new bike was to make it quieter, while also reducing cable wear. Yeti uses the ribbed chainstay protector it developed for the Arc, and added cable port protection for wireless droppers and drivetrains. Those parts come with every bike. With some builds, a buyer will get the spare parts in a bag.

The bike is also better protected from downtube damage. A two-piece dual-density downtube protector provides edge-to-edge coverage. The layer closest to the frame cushions the carbon. A hard nylon cap covers the cushion. It can be removed for dropper post cable access. And in case of impact, the downtube protector is easy and affordable to replace.

“We’ve waited for carbon construction to catch up with how we want to do it,” said Stretch. “Co-molded into carbon is a super robust, strong interface.” 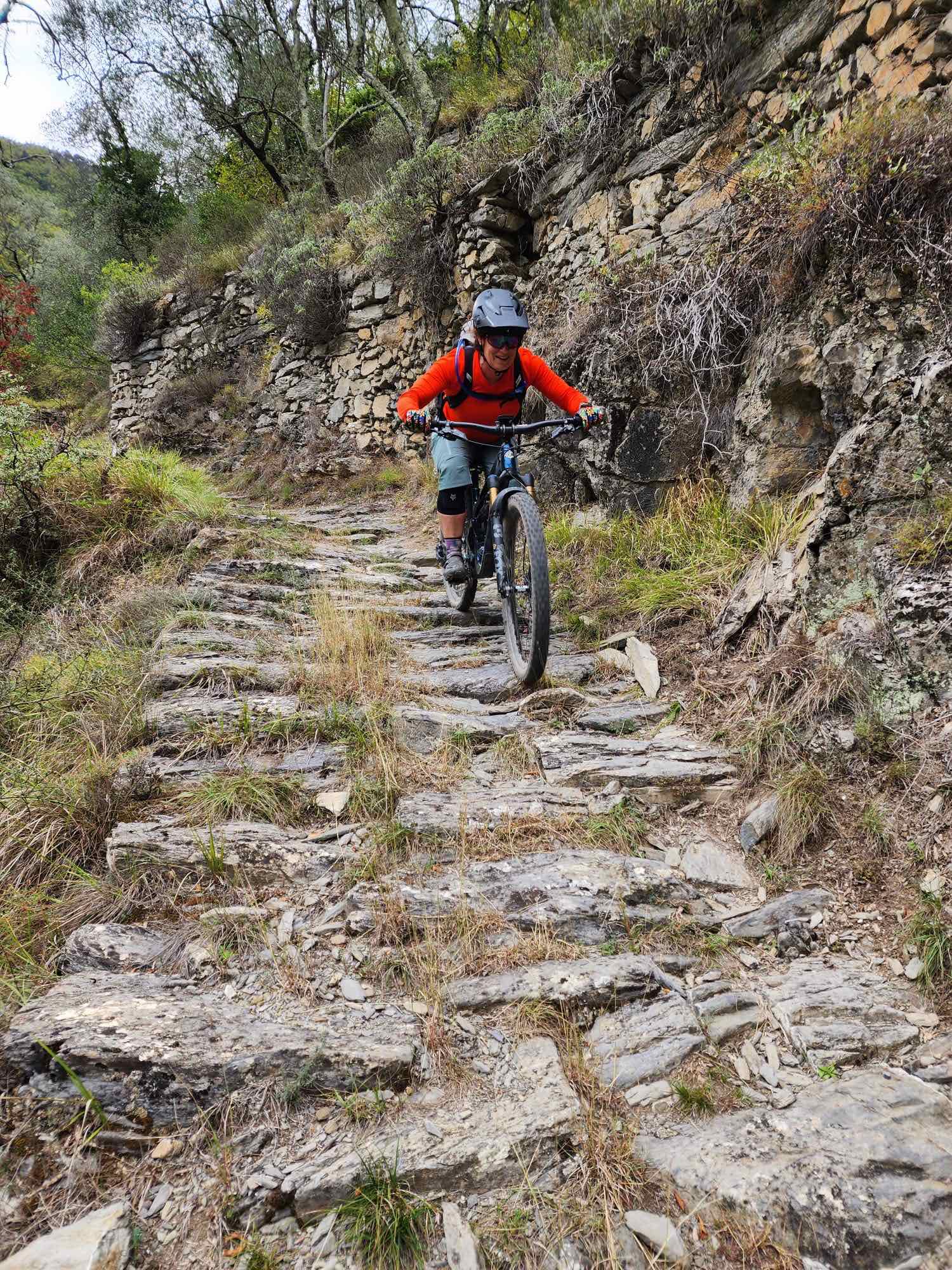 Changes on paper are only significant if they translate to the ride. And with the SB160, they do.

If you want to enjoy the climb and nail the descents, in my opinion, this is the best enduro bike you can buy. I see a lot of riders on the trail who are over-biked. But if your two-wheeled wanderings take you down steep and rugged trails, into unpredictable terrain, and to bike parks with big terrain, this bike is for you.

I have about 30 days pedaling the 29″ wheel SB160 so far, from Breckenridge, Colorado, to Vermont, and across the “pond” in Italy and France. I rode the SB160 for six days of the Stone King Rally ride. Every day on that ride, I climbed 4500-6500 feet, and I descended 10,000-14,000 feet. Even on the biggest climbs, I never hated my bike. I can’t always say I felt that way about the SB150. It was a solid climber, but even though this one has a frame that’s around a half-pound heavier, it climbs easier.

On flats and descents, it felt solid and trustworthy underneath me, familiar and better than I thought a bike could feel. The 170mm travel Fox Fox Factory 38 and the 160mm Fox Float X2 Shock worked seamlessly in tandem to suck up chunder, drops, rooty mats, and more smoothly than I could have hoped for. Every day of the Stone King Rally, I rode this bike down technical terrain I might have walked if I was on another bike. I felt planted, in control, and smooth. The bike saved me from a couple of poor line choices. It made me feel like a superhero without making the terrain boring. On treacherous fall-and-get-really-hurt sidehills I pedaled with confidence and never struck a pedal.

The SB160 is half a degree slacker than the SB150 with a 5mm longer reach for more space in the cockpit and more stability overall. The leverage rate on the SB160 is 17%, and the curve has a lot of flatness in the middle, with plenty of bottom out. No matter how deep I pushed this bike’s suspension, hammering stair steps descents, “alternate lines,” and negotiating boulder gardens, I felt like the captain of my own ship, calling the shots.

The seat tube angle and chainstay length increase with frame size. This made the transition from seated to standing easier, which was particularly noticeable on big climbing days and in rolling terrain. The more neutral position kept my weight on both wheels more evenly while maintaining a playful and spry feel to the ride. Maybe that’s why the SB160 felt lighter than the SB150…it felt energetic underneath me.

Yeti didn’t cave to trends and mullet this bike. They built the best bike they knew how to build, and it has two 29″ wheels, which also makes packing a spare tube easier.

Because I was able to run a 175mm dropper, not the standard 150mm dropper that’s the max for a lot of size M bikes, I didn’t feel like I would pitch over the handlebars, or like my bike got in the way when I was trying to negotiate tight terrain. Yeti says that most riders will be able to use a 150mm dropper posts on small frames, 175mm on medium frames, and 200mm+ dropper posts on L-XXL frames, depending on your actual seat height.

At home in Vermont, the bike’s precise handling shined in tight trees and slippery, rocky gullies. I didn’t get jounced and bounced off my line. The bike held firm, and matched my pace and my steering.

As a mostly east coast rider, I haven’t always been a fan of Yeti’s tire choice. But on the SB160 I didn’t need to change the rubber. To keep weight down, Yeti passed on grams-saving waify tires that would get shredded in the terrain this bike is meant to tackle, and saved weight with lighter hardware instead. The SB 160 is spec’d with durable, grippy Maxxis Assegai and Maxxis Minion II DHR, both with EXO+ casing. Four-piston Code brakes let me modulate speed with a dinnerplate 220mm front rotor and 200mm rear rotor for superb stopping power. 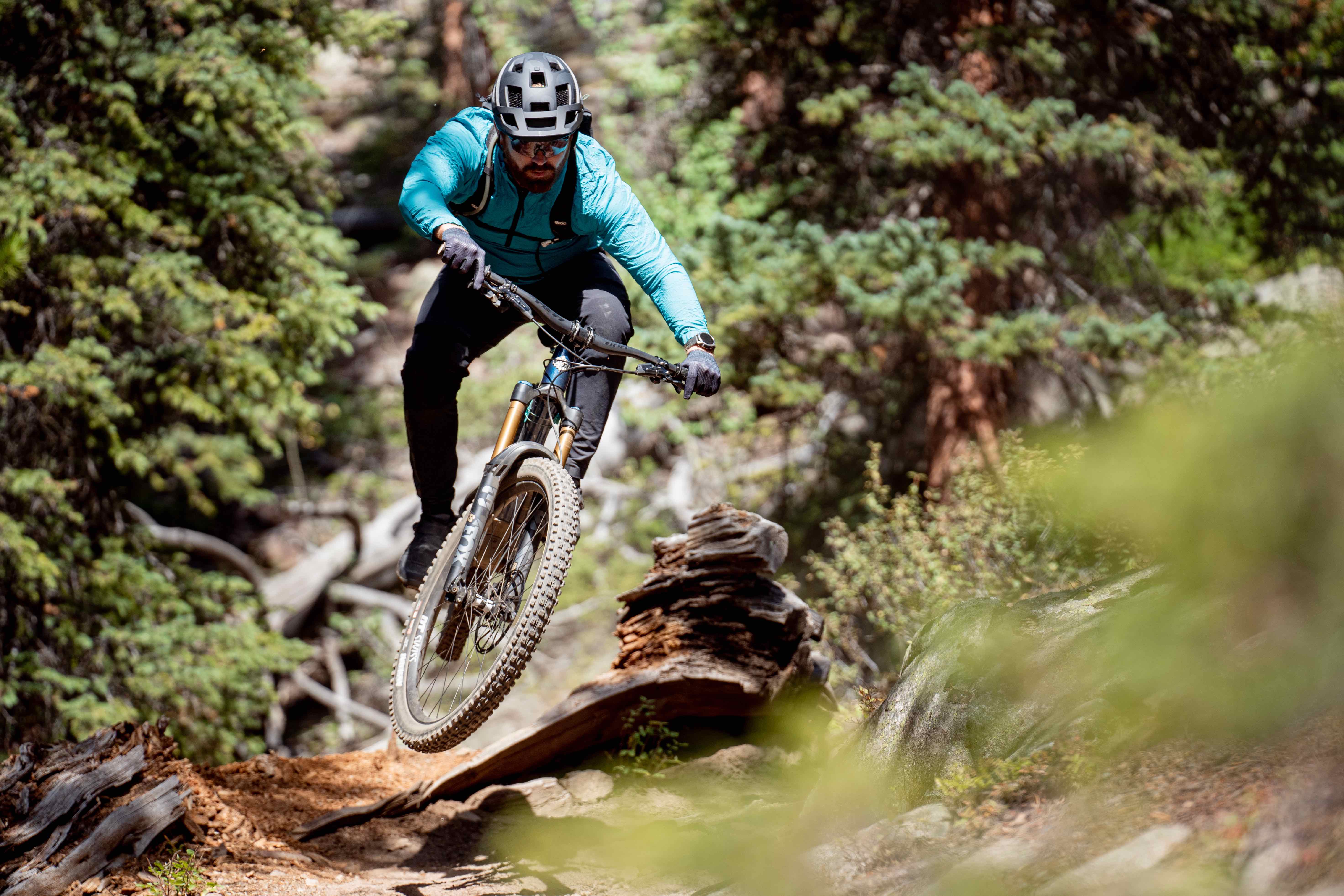 There’s only one, and it’s the price. Yeti has been called the dentist’s brand of choice, and pricing on the new bikes won’t do anything to dispel that reputation. Sadly, everything in the world just got a hell of a lot more expensive, Yeti’s bikes included.

Buy it, race it, or just ride it

The SB150 was the winningest male EWS bike ever. With the new SB160, Yeti hopes of continuing to claim the podium. But this isn’t just a bike for racers. If you’re a rider looking for a big travel bike that you can pedal anywhere, for a bike that’s as adept at climbing as descending, or for a bike that will help you be the rider you want to be, the SB160 is my top choice. If you ride a variety of kinds of trails and choose this as your trusty steed will you be overbiked? Maybe. But if you want a bike you can take anywhere and ride anything, this is it. 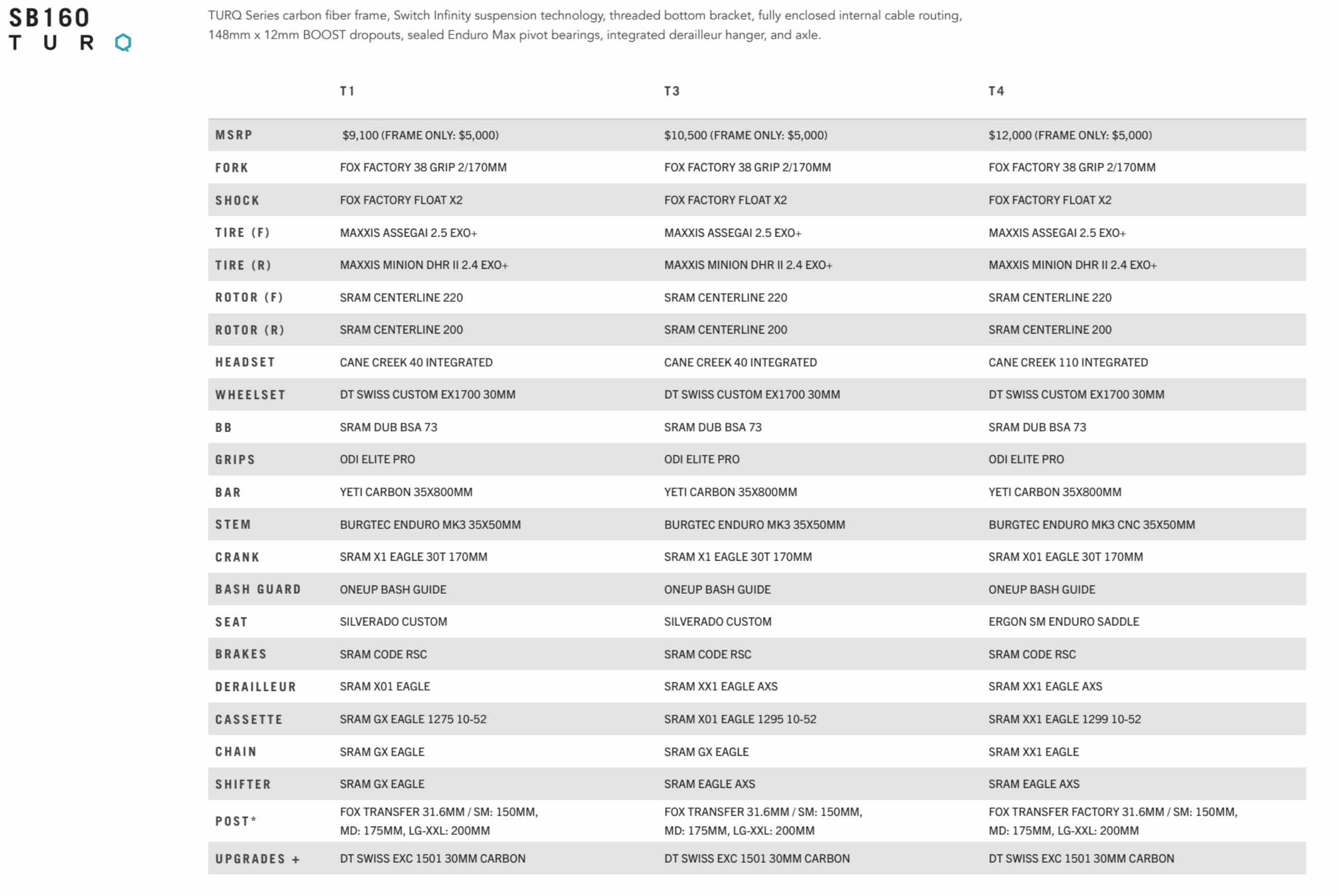 That’s not how it works.

With high ant-rise values such as this design there are pros and the aforementioned cons. Good enough for most people? Sure. I was hoping Yeti would expand their new 6-bar design to other models. Guess we gotta wait till 2024.

Man. This bums me out. I was hoping that just for once, they’d spend their engineering time refining all those details in an effort make it a much worse bike than before.