Seems there have been a few motorsports/bicycle collaborations lately, but this one is by far the hottest.

Specialized has teamed up with McLaren to create a sub-950g, aero shaped road bike. Taking advantage of the legendary car racing team’s FEA analysis and, uh, specialized computer programs, they developed new layup schedules and fabrication methods and created a frame that’s 15% lighter than their standard Venge. That included removal of a non-structural internal layer of carbon that’s normally used to easy mandrel removal, saving 40g with no detriment to performance.

Designed to combine the aero benefits of the Shiv with the lightweight, race-proven performance of the Tarmac, the Venge is already a pretty light, stiff bike. This version puts it over the top. It starts with a UCI-legal high modulus FACT IS 11 carbon frame and gives it a seemingly incongruous mix of thin, aero shaping and beefy construction with internal ribbing and reinforced sections.

More pics and specs after the break…

The bottom bracket, chainstays and seat tube are constructed as one piece, with continuous carbon fibers running throughout and internal ribbing. This creates a very stiff lower section where the power transfer happens. Not quite shown in this image is the rear derailleur cable exit (scroll down for a pic of this). Where many internally routed cables still pop out at the bottom of the chainstay a few inches ahead of the dropout, the Venge’s is kept out of the wind entirely by exiting straight out of the rear of the seatstay, just above the dropout. Even better: It’s compatible with both mechanical cable actuated shifting systems and electronic ones.

Specialized says the extreme attention to detail on the layup schedule is how they achieved such stiffness on an aero road bike, tweaking placement and rotation of the carbon fiber sheets by a few millimeters or degrees to achieve the desired result.

The tapered headtube is 1-1/8″ at the top and 1-3/8″ at the bottom and narrows at the middle. This tapered hourglass design provides the benefits of a tapered steerer (stiffer) but maintains its aerodynamic benefits by not flaring out massively to a 1.5″ lower and keeping the center section thinner. Further streamlining air flow is an integrated top cap that follows the shape of the head- and top tubes (click image to enlarge). Internal cable routing also keeps things clean and smooth.

The seatstays use a combination of rounded inside shaping and a smooth, flat outside to calm and direct the air before it hits the rear tire.

The seat tube falls within the UCI’s 3:1 rule and is reversible, giving it either a 0º or 20º offset depending on which way you slide it in. Check the seat collar, too, with rear-facing double bolts. The FACT Carbon fork blades mimic the aero 3:1 shaping of the post and run in a straight line from top to bottom.

The Specialized McLaren Venge was in development for 9 months. It’ll be raced for the first time at the 2011 Milan San Remo road race under three riders each on three Specialized sponsored teams, including HTC-Columbia’s Mark Cavendish, who should put the bottom bracket stiffness to the test. In a video, Specialized’s Head of Research and Development Chris D’Aluisio said this frame’s aerodynamics should translate to about a 3m advantage in a 200m sprint. If history is any indication, that should make Cav pretty much untouchable with the proper leadout.

The idea for the Venge came about after D’Aluisio modified their Transition triathlon bike with drop bars and went really fast. That “aha” moment four-plus years ago sparked development of an aero bike that performed like a Pro Tour worthy racing bike.

Once McLaren came on board, the special edition Venge became a whole ‘nother beast. To shed weight, each layer of carbon was specifically shaped and cut to avoid unnecessary overlap. No doubt this is a time intensive process, which helps explain the pricing…

Shown here is the S-Works Venge with SRAM Red. It’s decked out with a host of Specialized components and their Roval wheels and retails for $8,800 USD. The Dura-Ace model retails for $9,200 and swaps the black with white on the frame above for a bit more menacing look. An S-Works frameset (frame, fork) will also be available for $3,800 in either color variation. These will be available around the end of April.

The internal cable routing exits just briefly under the BB. Note the hole under the bottle mounts for Di2 wiring.

The S-Works version looks to get all the same frame features and benefits of the McLaren Venge with only a minor weight penalty, though the McLaren one is also reportedly stiffer. Specialized says the Tarmac SL3 is still lighter and stiffer, but the Venge tests faster on the track. It should present a compelling option for road racers more than crit folks. 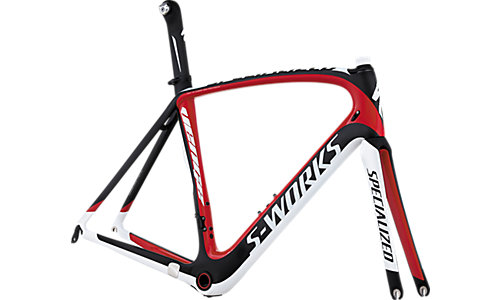