For 2015, Lazer is heading up the news with a few new low-cost helmets that bring a lot of their top comfort and safety systems, including a $70 MIPS helmet!

Shown above, the Blade (black) and Magma helmets give you 22 huge vents combined with their Rollsys retention system and in-mold construction. They’re essentially the same helmet save for the visor on the Magma. Both retail for $90, and weights are 250g without visor. They start shipping in Spring 2015.

Head past the break to check out the inside, plus lots of other cool new things below… Lazer’s Rollsys retention mech uses a top mounted dial to snug the entire head into the helmet. A thin cable runs from the rear cradle through a plastic piece that holds the forehead pads. Tightening it wraps the entire head, not just the back. The rear section is height adjustable, too. The Helium is one of their top end road helmets and has had a MIPS option for a while. The new Beam (white) brings MIPS down to a very affordable price point of just $70. That’s the lowest price MIPS helmet we’ve seen, and it’s done well: The plastic internal shell “floats” on small plastic breakaway tabs, which theoretically reduces rotational damage in the event of a crash. The Beam keeps it from interfering with airflow as much as possible by keeping it open behind the helmet’s vents. Another look. For a full tech brief on MIPS, read this. MIPS has thus far been mainly a premium offering on higher end helmets, but Lazer believes in it and wants to make available to a much wider audience. For comparison, the Helium MIPS is $230. In other good news, the gorgeous Z1 we saw at Interbike last year finally started shipping this summer. At a claimed 220g, it’s Lazer’s lightest helmet ever, yet it still has all the good tech. Plus, we really like this colorway! Yeah, we are kinda just drooling over it with these pics, but there is something new about it… …and that new thing is… 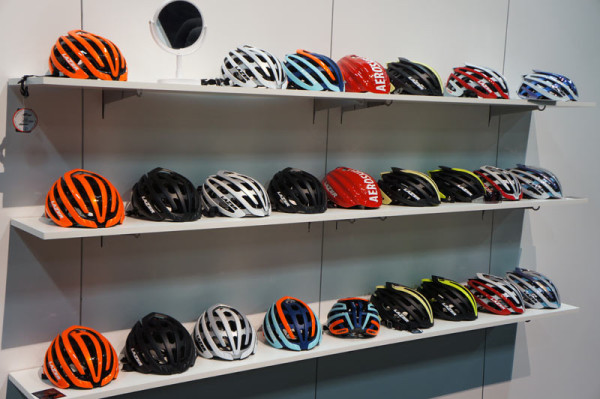 …the new Z1 FAST edition, which gets a non-removable aero shell that covers most of the front and top of the helmet.

By in-molding the full shell onto the EPS base, it passes UCI muster for use in competition. They say it also distributes impact forces better, but the real reason is to make you faster. Their tests show it can save 4-10 watts at 45km/h, or about 12-30 seconds in a 40km time trial. Fortunately, the rear vents are left open to pull hot air out, and those small channels under the front section should help fresh air get in there to replace it. Retail is $300, available Spring 2015. If you wanna go full aero, the new Wasp Air IS is a shorter version of their original Wasp TT helmet. By truncating the rear end, there’s less of a penalty when you’re tired and your head starts to droop a bit. With a longer tail, the aerodynamic drag would be much higher when the back end is sticking up like a wing flap. A trip line runs around the mid section to keep air gliding across the surface and reduce turbulence. …which is then moved across the head via interior channels.

With integrated visor the claimed weight is just 280g. But that’s without this doohickey: Even with a shortened tail, if you’re sticking the rear end of your helmet into the air by pointing your head downward, you’re creating drag. To remedy that, the Inclination Sensor (IS) alerts you if your head tilts out of the optimal aerodynamic range. It attaches magnetically to the underside of the helmet. To set it, you get into your most aero (or aero-looking) position, then get a friend to record that position with the buttons on the sensor. After that, you’ll get either a noise or vibration anytime your head’s angle deviates from that angle, plus or minus a small amount.

The Wasp Air will retail for $300 on it’s own, and the IS will add a fair bit more. Actual price and availability of the IS unit is TBA, they’re still testing it. The helmet itself will be out late October.

The Amy D. Foundation edition of the O2 helmet will put proceeds from its sales into the charity’s coffers. Again, sweet color choices! The foundation honors fallen pro cyclist Amy Allison Dombroski by inspiring and supporting women to follow their dreams and get active through cycling.