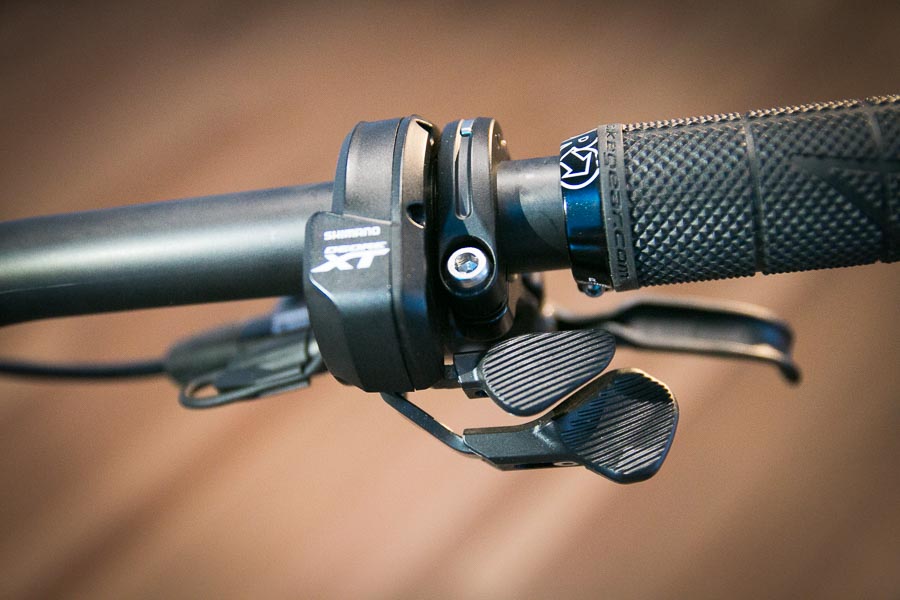 Just as Di2 trickled down on the road, so too does it now bring electronic shifting down to the a more affordable level for mountain bikes. And, just as Ultegra Di2 ushered in the new E-Tube and other technologies that improved upon the original, so too does the new XT Di2 8050 bring a host of impressive new tech and features to Shimano’s battery powered groups.

“How do we make the ride experience better?” asked Dave Lawrence, Shimano’s road product manager, as an introduction to showing how the new XT Di2 will improve the entire Di2 family. “We looked at electronic shifting and how that would change the ride experience. What we found was we could offer incredibly precise shifting. And the ergonomics were fantastic, too. Then we moved it into triathlon, but when we started using it in cyclocross is when it really took off. You had this precise shifting in the worst possible conditions.”

From there, it trickled down to Ultegra and a switch to their plug-and-play E-tube connections. That made remote shifters possible and really brought electronic shifting to the masses. All of that led to Dura-Ace 9070, which borrowed E-tube wiring and actually offered new shifting options for road and triathlon. It also added multi-shift and user control over shift speed and other settings. This group also put their electronic shifting below the weight of a mechanical group for the first time. All of these improvements then trickled down again to Ultegra, and then they took Di2 to their Alfine, Nexus and Steps pavement groups.

From there, it all combined to create the first digital mountain bike system, XTR Di2. And why did they do that? “Di2 leaves behind some of the restrictions imposed by mechanical systems,” added Matt Robertson, Shimano’s mountain bike product manager. “Things like using cables to pull something and how to route the cables to make it work correctly. And it opened up new opportunities to combine shift and suspension functions operating off the same battery. Di2 improves rider momentum and efficiency, and it allows the drivetrain to react at the speed that you are reacting to your surroundings. Rider input leads to instant reaction from the bike. In short, Di2 lets people build a better mountain bike.”

“Better ergonomics, shift without moving your hands, better and more precise shifting, user control over shift speed and multi shift, or even synchronized shifting that changes the front gear to optimize the gear ratio.”

That’s all well and good, but XTR Di2’s price put it outside the realm of most enthusiasts. The new XT Di2 will be more accessible, with a complete group price starting around $1,368 for a 1×11 setup, including brakes. It’ll also have better ergonomics, and it introduces all new wireless setup and data transmission features. XT Di2 still gets the independent adjustment of each button’s extension toward the grip. The bottom pad is a little larger than XTR, and the top pad is a little longer, making them easier to hit. XT’s button pads are also flatter, and felt much better.

Two cost saving measures were limiting the number of clicks and using steel rather than titanium. XT’s levers have a single-click rather than XTR’s two-click design. They found that it simplified it a bit, and with Multi-Shift, the second click wasn’t as necessary as most riders quickly learned how long they needed to hold a lever down to shift a specific number of cogs. The system allows you to run multiple Junction B boxes down the line, which allows it to recognize up to six different shifters…or just keep wire management tucked discreetly inside the frame. Materials make up much of the rest of the cost savings. Functionally the units are the same as XTR Di2, and parts are interchangeable between the groups. In fact, while folks have been doing it for a while, Shimano’s finally starting to talk about using road Di2 drop bar shifters with mountain Di2 derailleurs (or vice versa). There were lots of NAHBS bikes doing just that, but until very recently, Shimano hasn’t really endorsed or even discussed such mashups. You’ll still need to use both front and rear mountain or front and rear road derailleurs, you can’t mix one from road and mountain on the same bike. The chainrings carry over, too, but a new +/- tooth profile is coming soon, which is basically their version of a narrow wide. Perhaps the biggest news to come out of the XT Di2 introduction is their new dual-band Bluetooth and ANT communication. Bluetooth compatibility now lets you set up, tune and change the shifting and functions with your smartphone or tablet. Available for iOS and Android, the E-tube app will let you customize and update the system on both smartphone and tablet, and the tablet app adds Error Check and Preset programs. Those last two are aimed more at bike shops than riders, but they’re there for all to use. You can also still do it with their E-tube PC software, too.

That dual transmitter will be built into the XT system information display, and a new dual transmission D-Fly that’ll add wireless updates to both road and mountain bike groups. XTR will soon get a new display, too.

The ANT signal is ANT Private, not ANT+, meaning it’s transmitting a closed protocol that carries gear data directly to an approved third party cycling computer (Garmin, Magellan, Wahoo and Pioneer are partners so far). So, you could choose to have a compatible computer show you that data if you choose not to use the Di2 display (or you’re using it on a road group that has no display).

The ANT Private data will even transmit adjustment settings, letting you see the trim tuning on your cycling computer, and even get a low battery warning pop up. Suspension information is coming, too. Whether any cycling computer uses all of that data is up to that manufacturer. And all of that third party compatibility means it’s unlikely we’ll ever see another Flight Deck. The trick to making all of that communication work is that you’ll also need either the new BT-DN110 battery or BM-DN100 battery mount. Both contain the brains that allow those smart functions that make the wireless display work. So if you wanted to add wireless function to an existing XTR group, you’ll need to upgrade to either the new battery or new battery mount. The new battery will replace the original battery, so going forward you should see OEM spec using the new one.

A new battery was necessary because they couldn’t fit any more memory into the original E-tube unit. As electronics continue to shrink, they could fit the necessary transistors and what not into the same size package to add functionality while maintaining the same level of battery power. So, the new battery is the same size as the old one, it just does more.

To recap, all of that new wireless communication will soon be available on all Di2 groups, road and mountain. Now that we’ve covered the new wireless setup, let’s jump back to the shifters. The XT shifters, through the app, can be set to control a Fox iCTD-equipped fork and/or shock.  So, using Shimano’s Synchro-Shift to automatically shift the front derailleur as you move up and down the cassette means you can use the left hand shifter to cycle through Open, Medium and Firm settings on your suspension. Or, what we think would be cool, is you could set the larger, lower thumb paddles to do downshifts on the left and upshifts on the right, then program the smaller top paddles to cycle the suspension settings.

The app will make it all incredibly easy thanks to a graphical interface and check box settings. Very cool, and very user friendly.