Just an hour or so away from the 2017 USA Cycling Cyclocross National Championships in Hartford, Connecticut, is a little town called Wilton. A few years ago, Cannondale moved their headquarters there (which is just a few minutes south of their original location), and we’ve been looking for an excuse to visit ever since. CX Nats was that excuse.

Inside, the primary office building is broken into global and regional departments. The global teams define the new product road maps, then the regional teams help define the spec and other details to ft a particular country’s market. About 100 people work here. GT and Cannondale are based here, Charge and Fabric have their U.K. HQ, Schwinn and Mongoose are in Wisconsin, and Sugoi and Sombrio are in Vancouver. That means lots of conference calls, and now that all of the brands have been in the CSG stable for at least a couple years, they’re starting to work more cohesively together to complement one another’s lines without losing their identity or overlapping too much. But enough talk, come on in… CSG (Cycling Sports Group) occupies the second floor of the front third or so of the building on the left, as well as the gray building on the right. Before being broken up into offices for multiple tenants, the one on the left was where parts of the Hubble Telescope were built. On the right is where more of the fun stuff happens, but it’s also where the top secret stuff that we weren’t allowed to take pictures of happens. More on that further down. The front corner you can see houses a retail showroom. They were going to have a concept store open to the public, but local zoning laws (or something) wouldn’t allow it because there was already a Cannondale dealer in the area. The other corner has employee bike storage, a bike wash, locker room with showers, laundry and a full gym. They even offer an employee commuter points program to reward folks for riding into work. Those points can then be traded in for gear or even a new bike. As you walk inside the main building, the reception area provides a glimpse… …of the killer bar at the back… 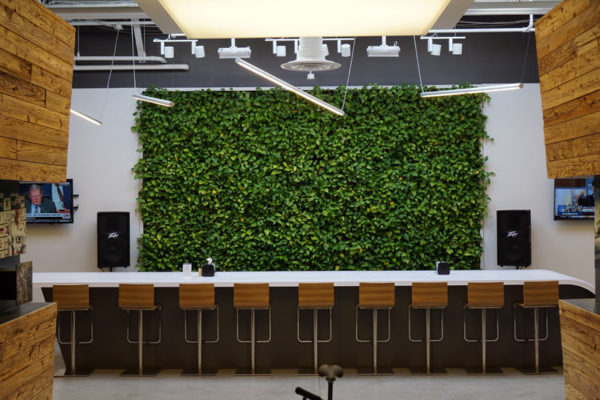 …which is where small events can be held, or employees can just gather for a coffee. A delicious, freshly made coffee from this: It’s no surprise they’ve got a top notch machine in place. After all, Cannondale used to co-title the Saeco racing team. Off to the left of this $10,000+ WMF 1400 bean-to-cup miracle worker are several single serve K-cup coffee machines that for some reason still see use. There is no charge to use this, so I’m confused why anything exists in its presence. With a cappuccino firmly in hand, we walked around to the right of the bar to an open seating area. In warmer months, the doors are rolled up to access the patio, which looks down on the gym/store/R&D building. …before walking into the GT Bicycles side of things. Everything from catalog design to marketing to brand management happens here. On the opposite side of the building is the Cannondale team. This side’s a bit larger, with private offices at the very front, followed by these cubicles… …and then more cubicles. Behind that green wall is where I got dirty looks for having a camera, and from a quick glance, it’s where new bikes are being drawn up and prototype frames are being evaluated. The actual fabrication of those prototypes and test mules happens over in the gray building. Behind these doors. Which only three people have key fobs to access. But are made of glass and you can look right in. Where you’ll see a bunch of bikes of various brands awaiting destructive testing. Another glass door on the back corner shows little more. Unfortunately, all of the good stuff isn’t publicly viewable. Alas, we tried. Our hosts explained that they do build early prototypes here and have stress machines to test a frame’s strength and flex, among other things. And that things do get pushed to the breaking point. There’s also a paint booth, and this is where the North American Lefty service center is housed, as well as some shipping and receiving. Scattered around the offices were random memorabilia, like this business development ad for Pennsylvania featuring their bikes. Why? Because Cannondale frames used to be made in Bedford, PA. This motley crew includes such legends as Tinker Juarez, Alison Syder and Missy Giove from the long running Volvo-Cannondale team. Entire walls are dedicated to the brand histories of GT and Cannondale. Above, Hans Rey helps introduce GT to mountain bikers after the brand expanded from BMX. He’s been an ambassador for the brand for more than 25 years! No tour would be complete without some bikes. Notice all the bikes hanging on the walls throughout the offices? We shot most of them, and there are some crazy, crazy things. Above is Peter Sagan’s 2013 custom bike, painted with an Incredible Hulk theme. Don’t get mad, but we’ll have to post the bike pics separately because there are just. so. many.