The new Specialized Turbo Vado takes e-bike integration to the next level. To show off its features and capabilities, they brought us out to Palo Alto, CA, for a couple days of riding. Day one gave us a tour all around the city, with stops for lunch, candy, and sightseeing at the opulence that is Stanford University. Basically simulating a day of riding to and from work or school, making a few stops, and otherwise goofing around on a bike. Also known as a good day…except for maybe that “work” part. Here’s how it all went, along with a video overview of the bike from one of the guys that helped design it, and a breakdown of the models offered… 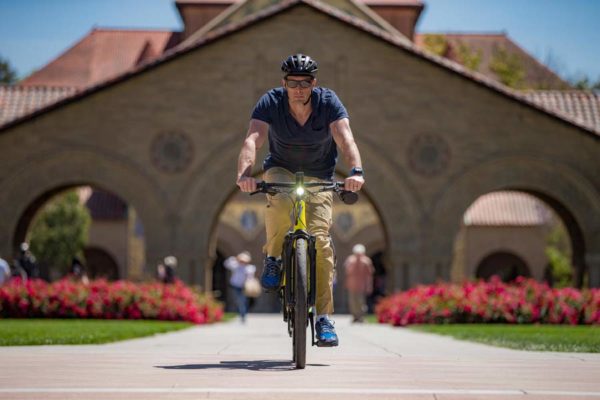 Day One’s ride spanned ~4 hours of city riding. Lots of stop lights, slowing and going, and rolling hills that would love to challenge the battery of any e-bike. With a minimum 28 mile range if you’re gunning it constantly off every light, the top level Vado is up for most people’s commutes. Which means the base level model with its smaller capacity battery and lower volt motor will last even longer…albiet maxing you out at 20mph. The other three cap out at 28mph, with the top two getting larger motors and batteries.

Even with all this power, the system is very quiet. There’s minimal motor noise, probably thanks to it being fully enclosed. The controls are easy to use, though many of kept accidentally hitting the horn button when dismounting the bike. Speaking of which, the horn is awesome…check the video below. The geometry of the bike mimics their other city bikes, and it’s dialed for riding around the city. It’s even mostly stable with hands off the bars, more so at cruising speed. This isn’t always the case with e-bikes since they’re much heavier, but the Vado feels balanced. Steering geo leans toward being nimble at low speeds, good for in-town riding and evasive urban maneuvers. It’s stable at high speed, too, something we tested by bombing down the surrounding hills, but high speed cornering, particularly railing a 90º street corner at speed, took a little more effort and focus. To me, it felt like it had a little understeer in those cases, but that’s probably not the typical usage either. For this particular type of bike, I’ll stick with “dialed” to describe the handling. Out on the open road, the Vado makes you feel like a super hero. We have an e-bike at the office that sees a lot of city use, and it’s awesome, but it caps out at 20mph of assist. We rode the Vado 6.0, and it’s crazy how much better it is cruising at 28mph. We were more likely to keep up with traffic in town, and getting from point A to B on bike paths or back roads was so fast. Worth the upgrade if you can justify it. And I know you can justify it…to yourself anyway. Best of luck to you.

Compared to other e-bikes I’ve ridden, a couple of differences stood out. The integration of components and included features are the obvious ones…the Vado simply looks bad ass. Functionally, though, it seems to have less abrupt starting and ending support. You can adjust the acceleration via their app, but ours had the factory setting that gradually increased assist from nothing to the desired support over two seconds. Compared to bikes that kick in 100% support as soon as they sense pedal movement, this was refreshing. I think I’d adjust it to be a little quicker in the city so I can get out in front of cars quicker, but it’s less jarring. The downside is it’s also less stupid-s*&t-eating-grin inducing, so if you wanna impress your friends, crank it up to 11. At the top end, the assist seemed to taper off slightly before hitting its max support. So, around 26mph, it seemed like my effort would gradually take on a more important role. Contrast this with others’ support that falls off a cliff at the limit, and it makes for smoother transitions into higher speeds. I also noticed less system friction when pedaling with no support or above the max support speed, which is a good thing. Other than the added weight, it rides just like a bike.

Do I want one? Hell yeah. And to the naysayers, you’re entitled to your opinion, but at least go ride one first. Anyone that commutes by bike is selling themselves short by not even trying it. Just be forewarned, you will then want one, and you will try very hard to justify the 5.0 or 6.0’s bigger motor. Especially if your route has climbs. We bombed UP Alpine Road, ending on 15% or steeper grades, and they were effortless. And then we flew down the backside, topping 40mph (my watch captured 52.31mph, but pretty sure I maxed somewhere around 44mph).

For our launch coverage full technical coverage and all the finer details, read this article. Starting at the top, the Vado 6.0 gets all the bells and whistles and retails for $4,800 USD, and the 5.0 isn’t far behind. Shared features for both models include:

The Vado 3.0 steps down to the standard LCD computer, a 300 lumen headlight, and gets the smaller 250W motor and 460 Wh battery with a 3h 20m charge time. Despite the lower power system, it still maxes out at 28mph of assist. Retail is $3,200…with no horn or brake lights.