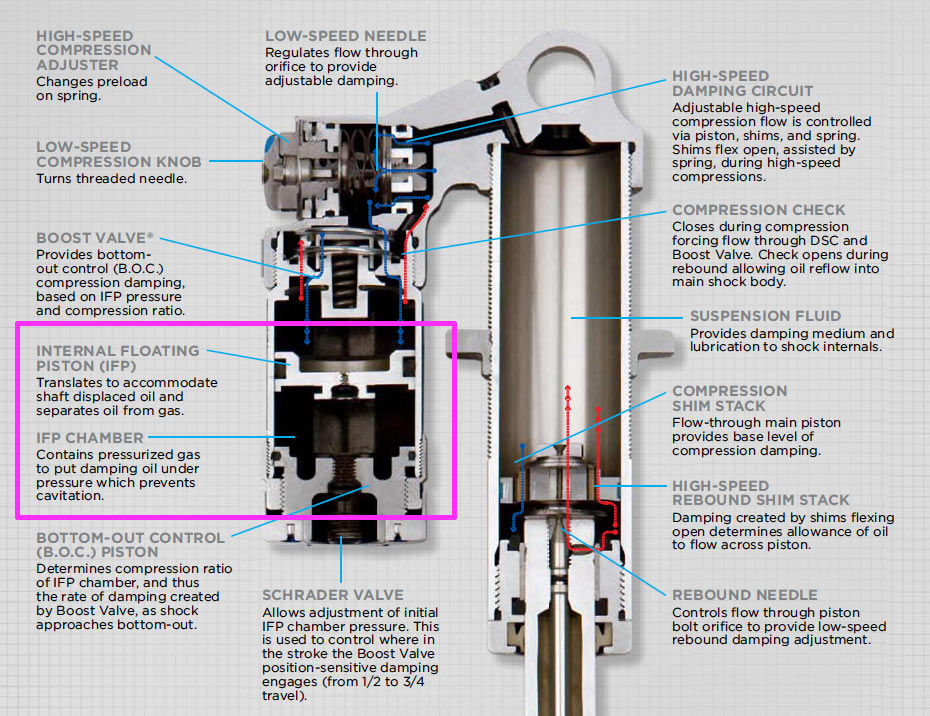 The IFP, or Internal Floating Piston, is found in most modern shocks. Usually, it’s located at the back of the damping circuits, where the oil flows as the suspension is compressed. For simplicity’s sake, we’ll talk about shocks, but it can work the same in a fork when used there (some forks do, but not all, which is another story).

As the shock compresses, oil is pushed through the compression damping circuit, and that oil needs to go somewhere. That “somewhere” is a reservoir, external or internal, which means there needs to be space to hold that fluid. Older designs, particularly forks, had an open space with air in the reservoir, and the oil would compress the air as it was squeezed into that space. The problem with that design is that air and oil could mix as things were sloshed around, and air bubbles could end up getting sucked back into the damping circuits and wreck the damping circuit’s effectiveness.

The solution is the IFP…

An IFP is exactly what it sounds like, a piston floating inside the shock. Typically, it’s separating a high pressure nitrogen chamber on one side from the oil on the other. Mainly, this prevents cavitation by keeping pressure on the oil to help push it back through the rebound damping circuit, which is good. And, it keeps the oil in an airtight system, so bubbles can’t mix in. But, there are two downsides to the traditional IFP.

ALTERNATIVES TO A FLOATING PISTON The other downside is that the piston needs a tight seal to separate the oil from the nitrogen. That tight seal creates friction, and that friction must be overcome to initiate travel. That friction also creates heat, which can pervade the system and affect suspension performance on long, fast, aggressive descents.

One solution is a bladder based design, like the nitrogen filled bladder like on the new Specialized BRAIN shock (shown above). The benefit of a bladder design is zero friction and heat, meaning less effort required to get things moving.

Why nitrogen? Because its molecules are larger than oxygen and more inert, so it doesn’t break down or leak out over time like air would. That’s why you virtually never need to recharge the IFP chamber on your shock.

To summarize, the IFP essentially creates a closed oil circuit inside the shock, preventing air from mixing with the oil so your suspension works the way it should.

The fun never ends. Stay tuned for a new post each week that explores one small suspension tech, tuning or product topic. Check out past posts here. Got a question you want answered? Email us. Want your brand or product featured? We can do that, too.