The all-new SRAM DUB crankset and bottom bracket collection introduces the final piece of their “systems engineering” puzzle, giving them a completely optimized drivetrain. The idea was to take the respective benefits of BB30 and GXP, combine them, then eliminate any of the drawbacks of either system. The result is a more standardized design that lets them drop weight, improve performance, simplify installation regardless of what frame you have.

While they’ve been quite innovative with their drivetrain parts over the years, introducing the XD freehub body interface, 12-speed, 1x drivetrains, etc… SRAM’s cranks have stayed largely the same. No longer. They’re (rightfully) hesitant to call this a new standard. Technically, it’s a new spindle & BB design that will be backwards compatible with all existing bottom bracket shells.

At the cranks, DUB combines the durability and simplicity of a steel 24-to-22mm GXP spindle and bottom bracket combo, but the lighter weight and improved stiffness of the oversized alloy 30mm spindle found on BB30. And they’re doing all that with a single crankset spindle size (which happens to be 28.99mm in diameter), so all cranks are the same regardless of what type of bike they’re going on. The benefit of all this is that they can optimize the cranks’ layup or forging as best as possible because they only have to design one single crankset at each level. For the bottom bracket, they took the four most common designs and created a DUB bottom bracket that puts the bearings outside the frame in most cases. This not only gives them a wider stance (which improves stiffness), but combined with the slightly narrow spindle, it also lets them use larger bearings (for better durability). It also created room for proper seals. Basically, the bearings and BB shells or cups no longer have to compromise to fit the frame.

In a nutshell, DUB means one single crank design that fits every BB standard out there, with a BB that fits that spindle into any frame standard. Except they’ll also have fat bike spindle widths and Q-factor options. So, technically, they’re not exactly inventing a new standard, but what they’re calling a “standard killer” because it works with everything. SRAM’s been working on this project for at least three years, coordinating their teams in Germany, San Luis Obispo and Chicago. For now, it’s launching on XX1, X01 and GX Eagle, Descendant carbon and alloy, and Stylo carbon and alloy. For these products DUB immediately replaces the original GXP and BB30 options.

DUB introduces a complete, “system engineered” drivetrain for SRAM, and they say it’s now the lightest in class now, even beating Race Face Next SL by ~20 grams.

Weight savings come from using an oversized alloy spindle (as opposed to the steel GXP spindles), which is bonded to the crank arm rather than pressed on like their current designs. Layup on the carbon crank arms is very similar, though they do get a bit stronger and stiffer, with the XX1 getting further refinements to save additional grams. 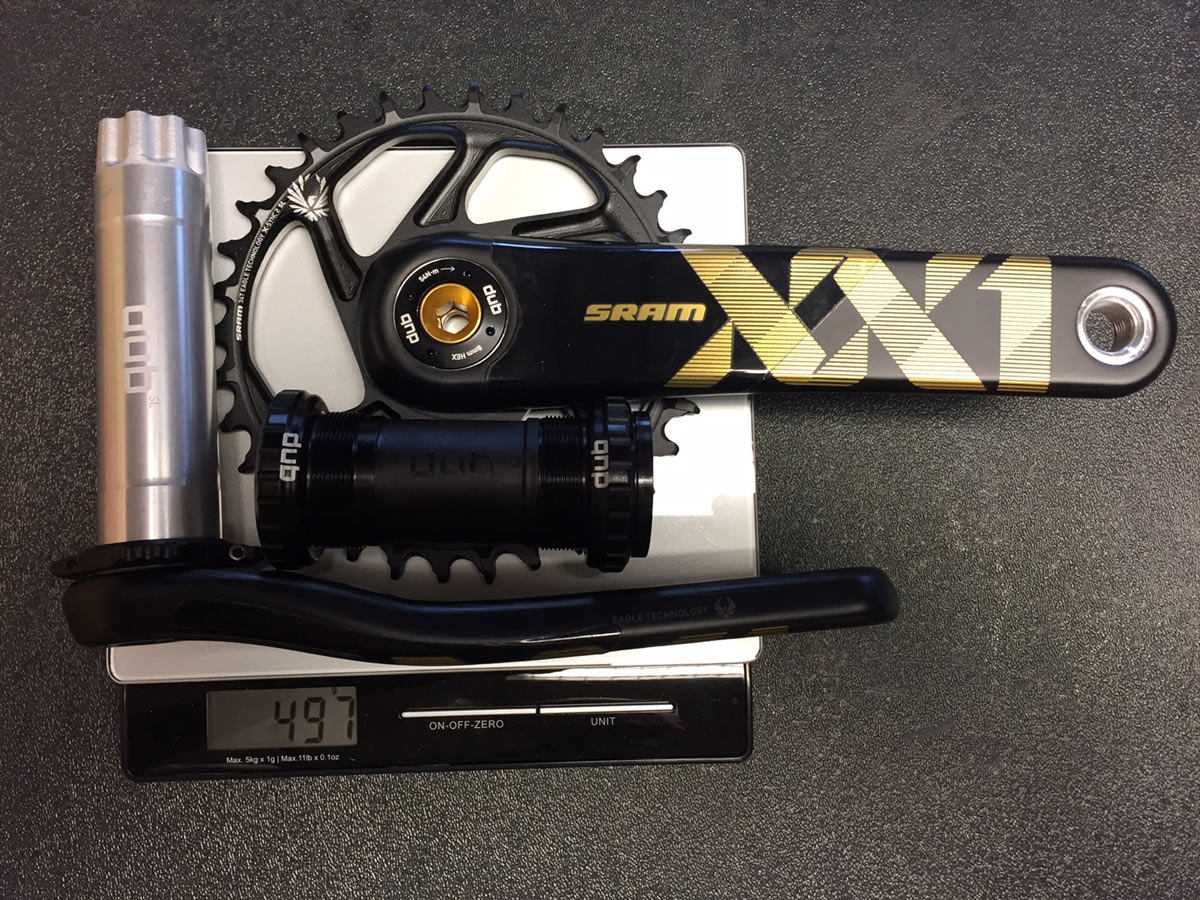 Between these four DUB bottom brackets, SRAM says you can fit their new cranks into any modern frame. Clockwise from top left are: