Just like they did with their Aerodynamicist “world’s fastest road wheels“, Hunt’s new aero gravel 42 Limitless Gravel Disc project set out to build a faster set of wheels for mixed surface riding, on and off-road. The 42 Limitless Gravel wheels are just a bit wider and aren’t quite as deep as the 48 Limitless road wheels, but shift the focus to lowering drag with gravel race tires while improving on stability in crosswinds… Hunt’s aerodynamically-optimized “Aerodynamicist” wheels have been in development for around three years now, by their in-house aerospace engineer Luisa Grappone. Just this past spring they gave us an inside look at what aero gains could mean for fat tire gravel bike performance, making it clear that this aero gravel wheel project was in the works.

We all have been debating whether aerodynamics made sense with the lower speeds and knobby tires of gravel riding, so Hunt went to the wind tunnel to try to at least give us some data to look at it…

The simple answer from their initial study was yes. Hunt claims they saw real attainable gravel drag reductions in the wind tunnel. With the size gravel tires that are actually being raced these days, even on the recent crop of wider road & all-road rims that weren’t as wide as the tire itself, they results seem to show up to 9W of drag reduction in the wind tunnel.

Not huge gains, but still probably enough to make a difference, especially in super long gravel races where that could add up to several minutes gained.

But that was with current road or all-road wheels, and Hunt figured they should be able do better when starting from scratch with aero gravel as their target. The ‘dirty’ airflow coming off of knobbed gravel tires make gravel aerodynamics more complicated that on smoother road tires. But compared to the aero performance of most regular alloy gravel wheelsets, or even the widest aero road wheels, there appeared to remain room for improvement. 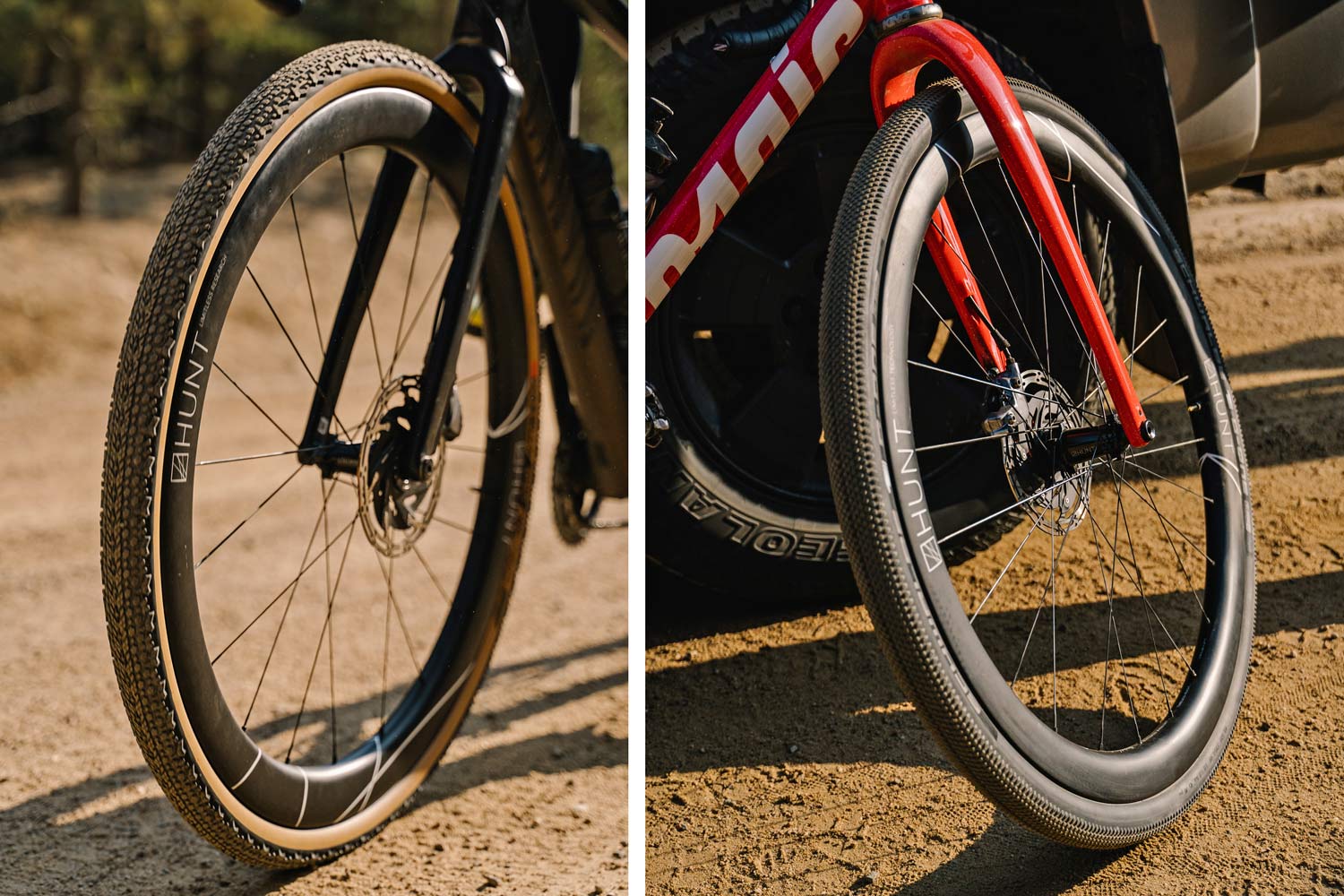 The new aero gravel Hunt 42 Limitless Gravel Disc wheels were designed around 700c tires from 38-42mm wide. These aren’t adventure bikepacking combos, but the kind of race-ready setup you are likely to find on the most competitive endurance gravel races like the DK200, Barry Roubaix, The Rift, or even various Grinduro runnings. The new wheels take advantage of the same unique to Hunt multi-density Limitless tech developed on their aero road wheels to get much wider carbon rim profiles without weight penalty.

The Limitless tech uses standard 1.6g/cm3 density for most of the structural carbon, plus a co-molded lower-density polymer of just 0.7g/cm3 to fill out a hollow spot in the otherwise complete aero rim profile. Not only drag reduction claims, but also improved crosswind stability Lowering drag, even at varying yaw angles, has seemed to have been boiled down to deeper and relatively blunt-nosed rim shapes in recent years. But gravel racers have typically opted for lighter, shallower & more compliant wheels over the faster & deeper rims, also because they tend to ride more alone in wind-swept conditions.

Much like we have seen with the fastest DT Swiss & Swiss Side (working in the same GST wind tunnel, and using the same data collection sensor tech), just as much focus has been spent on minimizing steering moment for easier control in variable wind conditions. Hunt says their resulting 42mm deep, extra wide rim became a good aerodynamic solution thanks to low core drag, better crosswind performance, and relatively low weight. The direct drag reductions are small compared to some of the best premium aero wheels on the market, almost negligible in this drag graph that Hunt provided. But Hunt still thinks that tiny 0.05W savings is worth noting, especially at their lower price point.

Also worth noting, Hunt isn’t comparing to every fast aero wheel out there, picking what they say they see most at big gravel races. The also limit comparison, and better drag claims to wheels under 50mm deep. That 303 NSW is also curiously absent from Zipp’s current line-up, but still pops up on the gravel racing scene. Maybe a new version of that one is coming soon, too? Plus the latest, even wider 3T Discus 45|40 wheels were also not tested, since they hadn’t fully made it to market yet so Hunt couldn’t compare them. As they have in the past, Hunt attempts to be quite transparent with their wind tunnel research, sharing their methodology and findings in a publicly available White Paper that you can download directly here. You can dig more into the details of why they think they are asking the right questions that apply to gravel racers. So what does all of that mean for you the gravel rider? Probably incremental aero gains vs. the top wide aero carbon competitors (0.05W)? But more surely big drag reduction vs. shallow alloy gravel wheels (up to 16.8W possible savings there, apparently). Plus what should be noticeable improvement in crosswinds when compared to most other wide aero wheelset if those Steering Moment graphs pan out on the road.

DT Swiss & Swiss Side seem to say the same thing with their ARC & Hadron wheels, and from personal experience I can say that those 62mm deep DT Swiss ARC wheels do handle better in the wind than other wheels I’ve ridden of similar depth. What you get is a wide U-shaped 25mm internal, 36mm external hooked tubeless carbon aero gravel rim with a mid 42mm depth. The UD T24/T30 carbon rim is optimized for 38-42mm gravel rubber, with both clincher & tubeless compatibility with all tires (can be used with up to 54c tires). The 42 Limitless Gravel Disc wheels are covered by Hunt’s H_CARE lifetime crash replacement warranty, offering security for their original buyers. The new wheels are available for pre-order now, with delivery slated for February 2021.