Typically, when a decent-sized brand like Alchemy runs out of inventory, it’s not because they forecasted poorly. More likely, it means they intentionally sold off old inventory to make room for something new coming. And that seems to be exactly the case with their mountain bikes.

Just before the holidays, they posted that they’d sold out of their mountain bikes. Now, they’re teasing an all-new version of their full suspension Arktos trail mountain bike, but only for those on their VIP email list. And, you know, we like to give our readers a peak behind the velvet ropes, so here ya go… The screenshot above, along with the feature image, shows some key differences in the new frame compared to the original Arktos mountain bike.

The most pronounced change is how the downtube juts out from the bottom bracket. This makes room for a water bottle cage inside the front triangle, directly under the shock. Another bottle cage mount is below that, allowing you to run two short 16-20oz bottles on the bike.

Shown above, the Arktos has had a number of options available to it since launching in 2015 with a unique Sine Wave suspension designed by Dave Earle…and 27.5″ wheels only. Then, in 2016, they moved production overseas to meet demand, which makes sense since the Arktos isn’t available in custom sizes and geo like most of the rest of Alchemy’s bikes.

In 2018, they added a 29er option, which eventually replaced the 27.5″ models altogether. Until, that is, they added the Nine7Five mullet version, which put a 27.5″ wheel on the rear by swapping the upper linkage. Just before that, though, they launched the Arktos 29 ST (Short Travel) option for folks wanting a bit faster, more efficient bike on “light trail” days.

Now, with the new version, they’re promising three different travel settings and other upgrades. But, that’s all they’re teasing until things open up at the end of the month.

You can get on the pre-order list for first access to the bike’s debut on January 30, and check out the looped teaser video on their website: 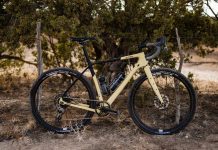