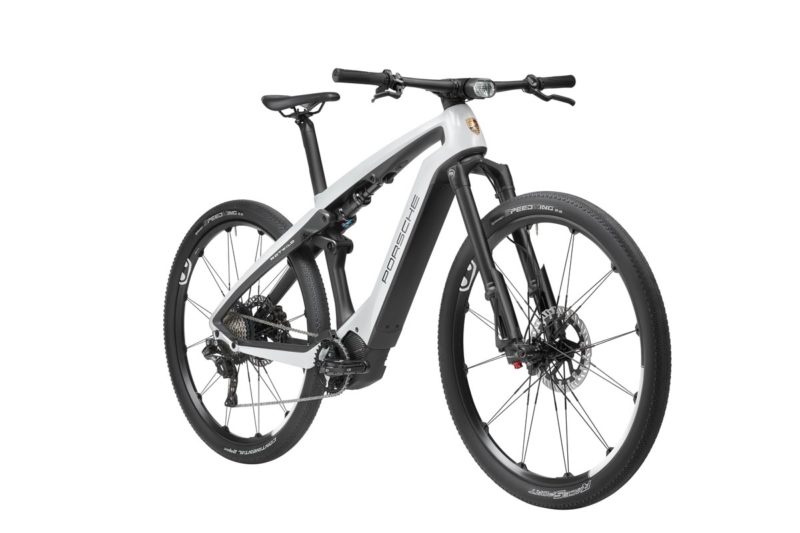 What would an e-bike modeled after the Porsche Taycan look like? Apparently something like the new Porsche eBike Sport & eBike Cross. The latest two wheeled design exercise bearing the legendary Porsche marque, these new bikes certainly bring some unique style to the table – along with an intriguing build. 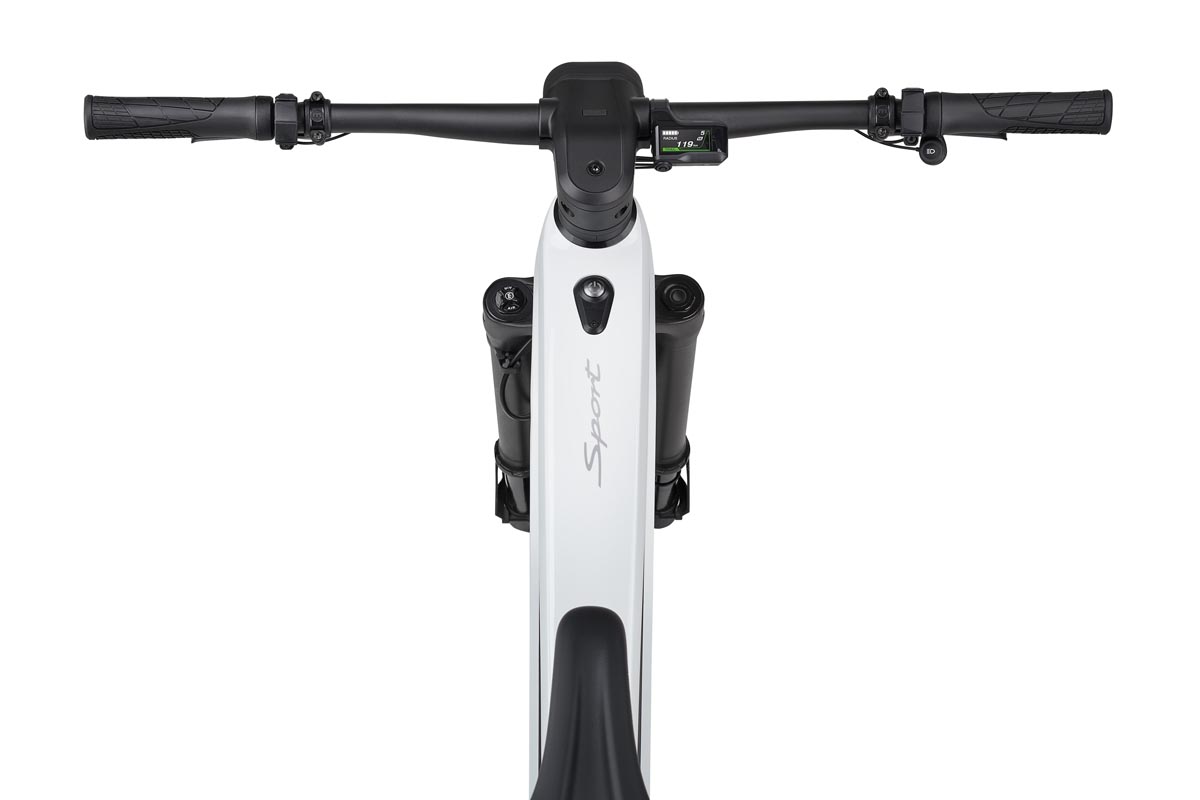 Most notable may be the inclusion of the Magura MCi cockpit integration concept that the fellow German brand has been teasing. By hiding the master cylinder in the handlebar along with the hoses and wires, the resulting aesthetic is very clean. 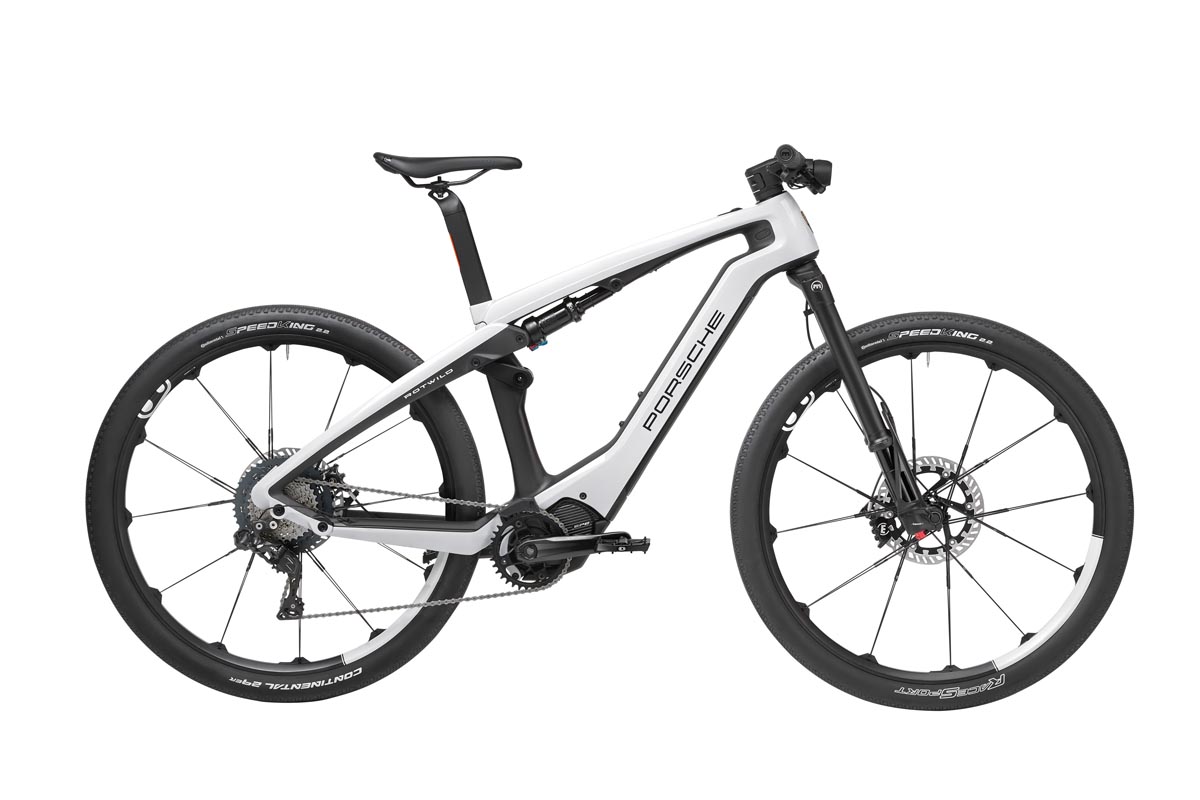 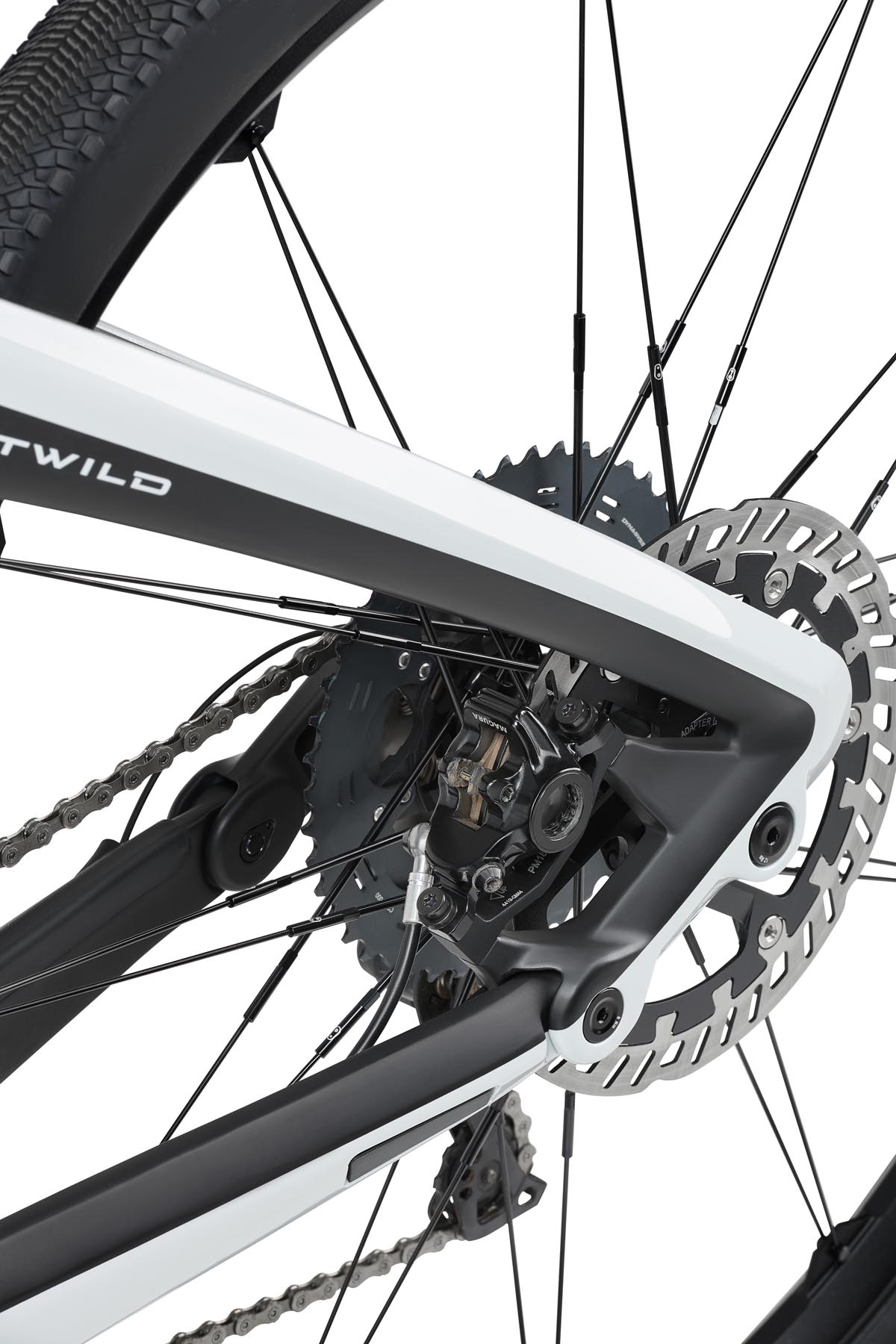 Offered only on the eBike Sport, this version of the two e-bikes is geared more towards every day use. While it still features a carbon fiber full suspension frame manufactured by Rotwild and a Magura Boltron eMTB inverted suspension fork, the bike gets a rigid seat post, and more street-friendly MTB tires. 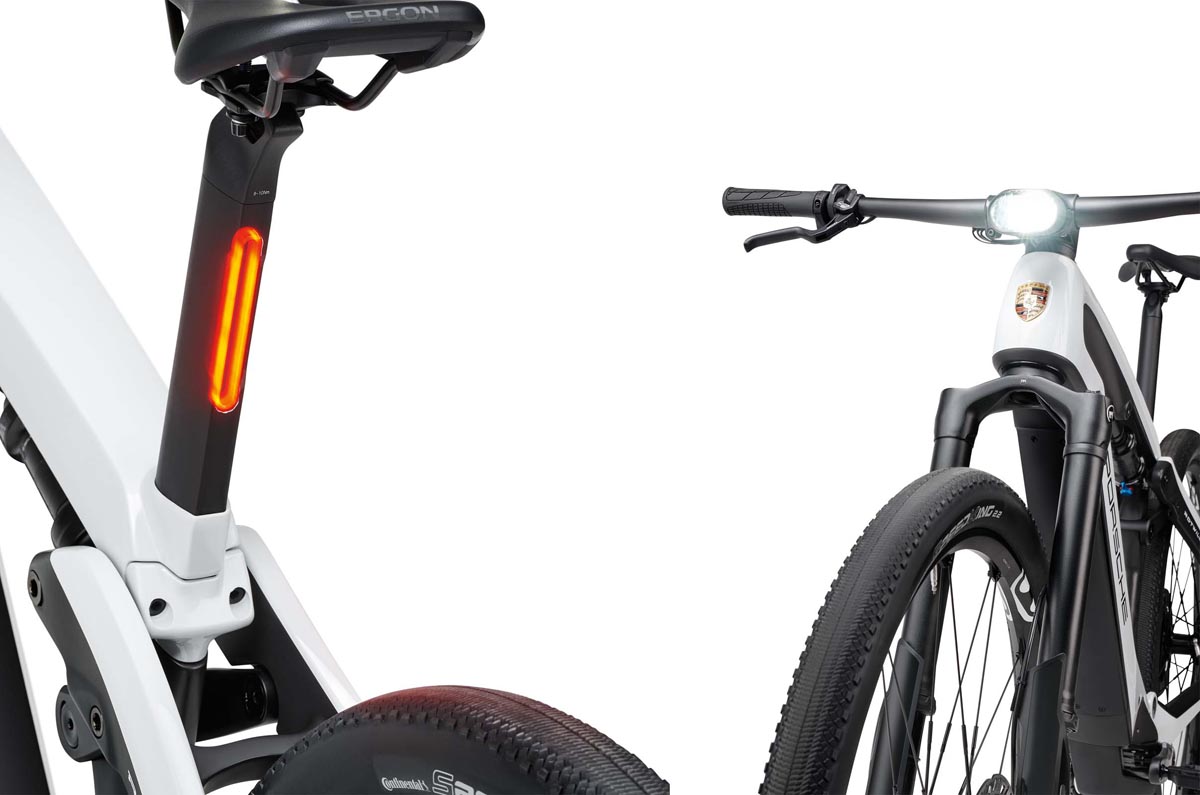 The rigid post also allows them to integrate M99 LED lights from Supernova into the mix, along with a headlight integrated into the stem as well. 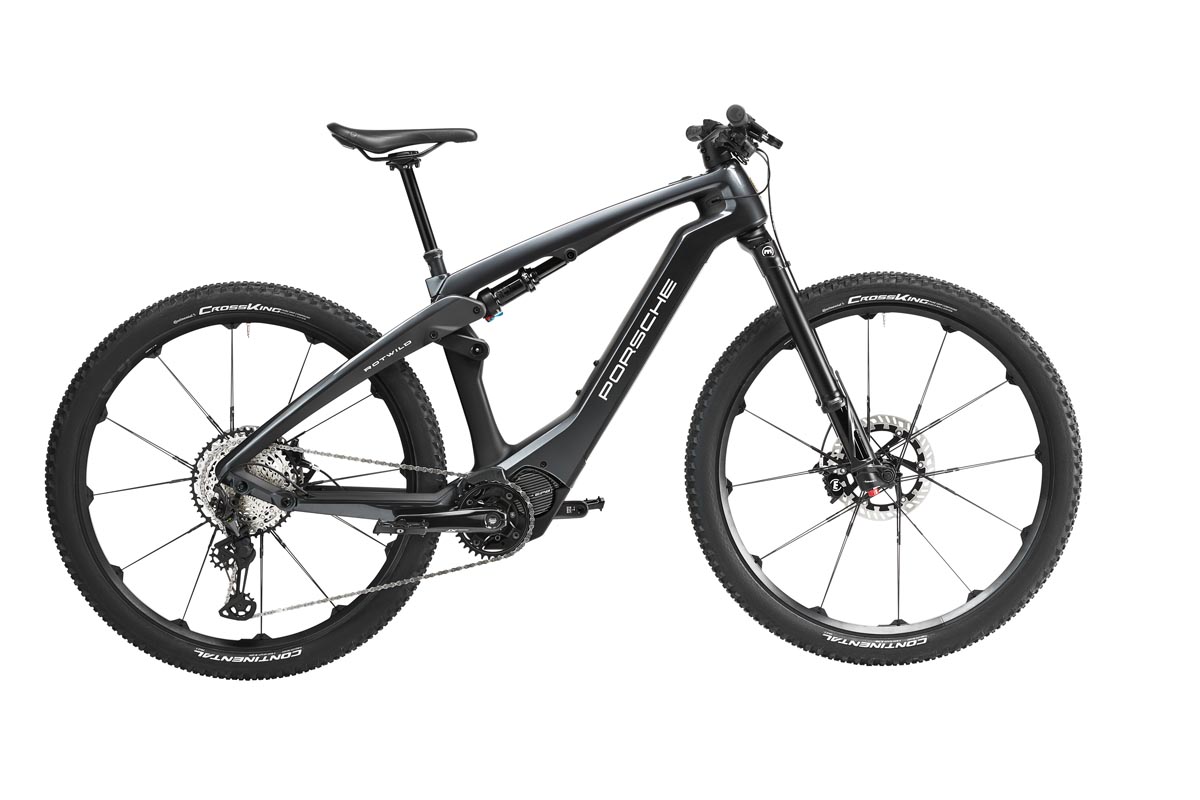 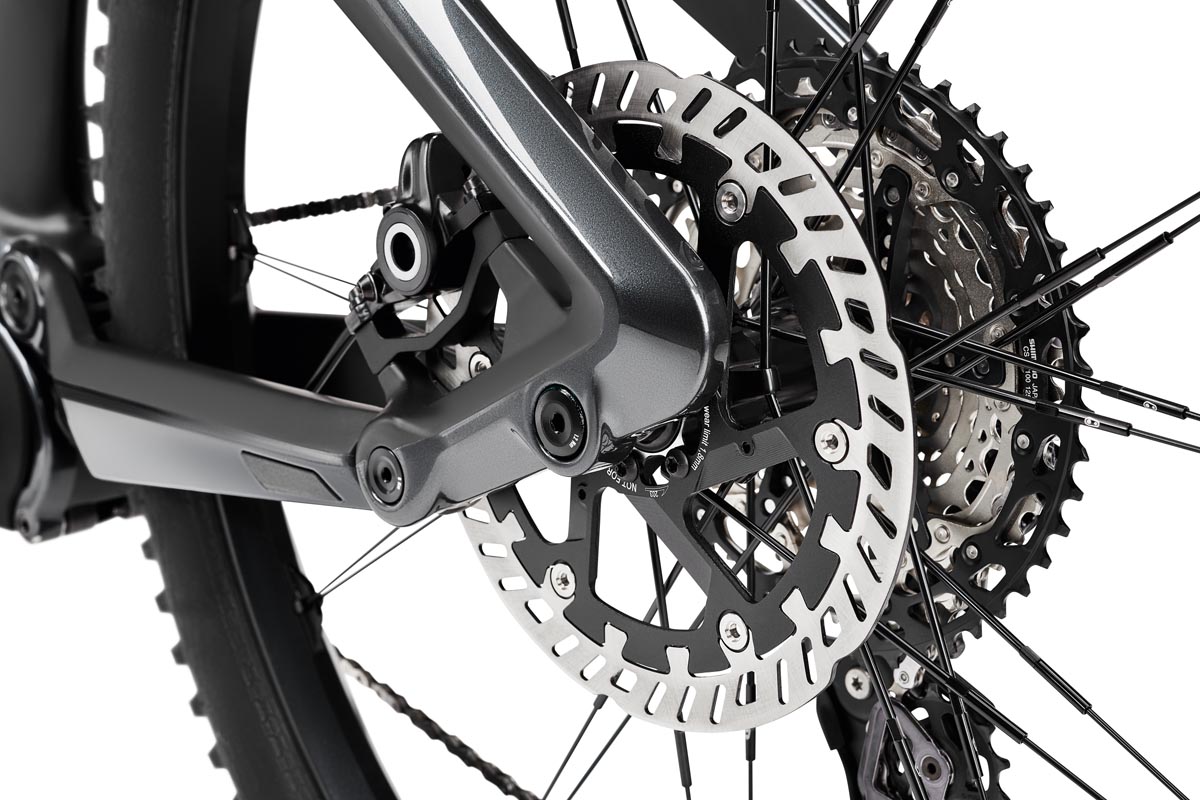 The eBike Cross on the other hand is not a cyclocross bike, but more of a traditional full suspension mountain bike with a dropper post, MTB tires, and the same suspension as the eBike Sport. Since this bike doesn’t get the MCi system, it instead opts for Magura MT Trail brakes with their e-bike specific 220mm rotors.

Both bikes utilize the new Shimano STEPS EP8 system with the Sport getting a Di2 drivetrain, while the Cross uses a mechanical XT 12 speed system. 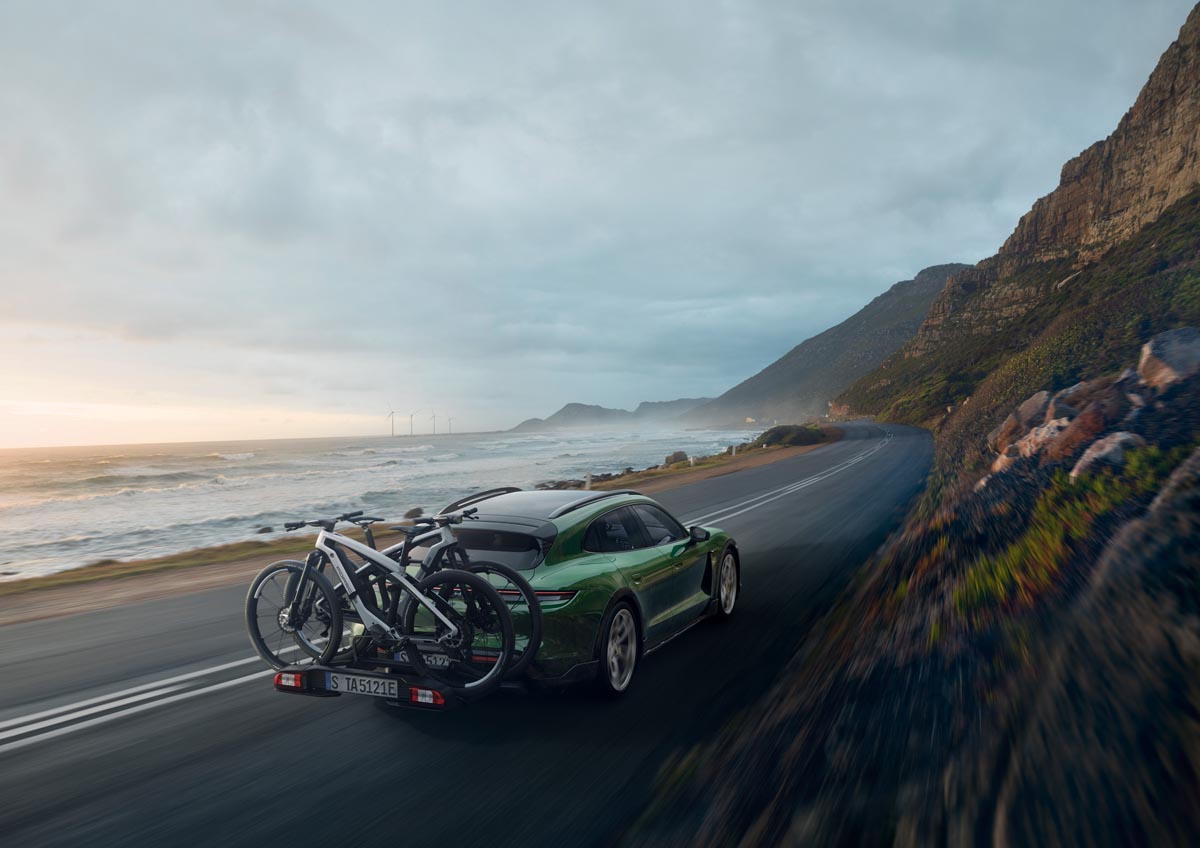 Complete build specs aren’t yet available, but claimed weights are given as 21.2kg for the Porsche eBike Sport (size M, including pedals), and 21.7kg for the Porsche eBike Cross (size M, including pedals). As you might expect from a name like Porsche, the bikes are priced at the upper end of the spectrum with the eBike Sport selling for $10,700 and the eBike Cross at $8,549 – though to be honest, even if these bikes weren’t branded as Porsche, with this spec, the pricing probably wouldn’t be far off. Bikes will be available later in March in three sizes, S, M, and L, at Porsche dealers and select “specialist bicycle outlets.”

And if you happen to own a Porsche Taycan Cross Turismo, there will be a new Porsche bike rack specifically designed to hold up to two e-bikes, up to 50kg.