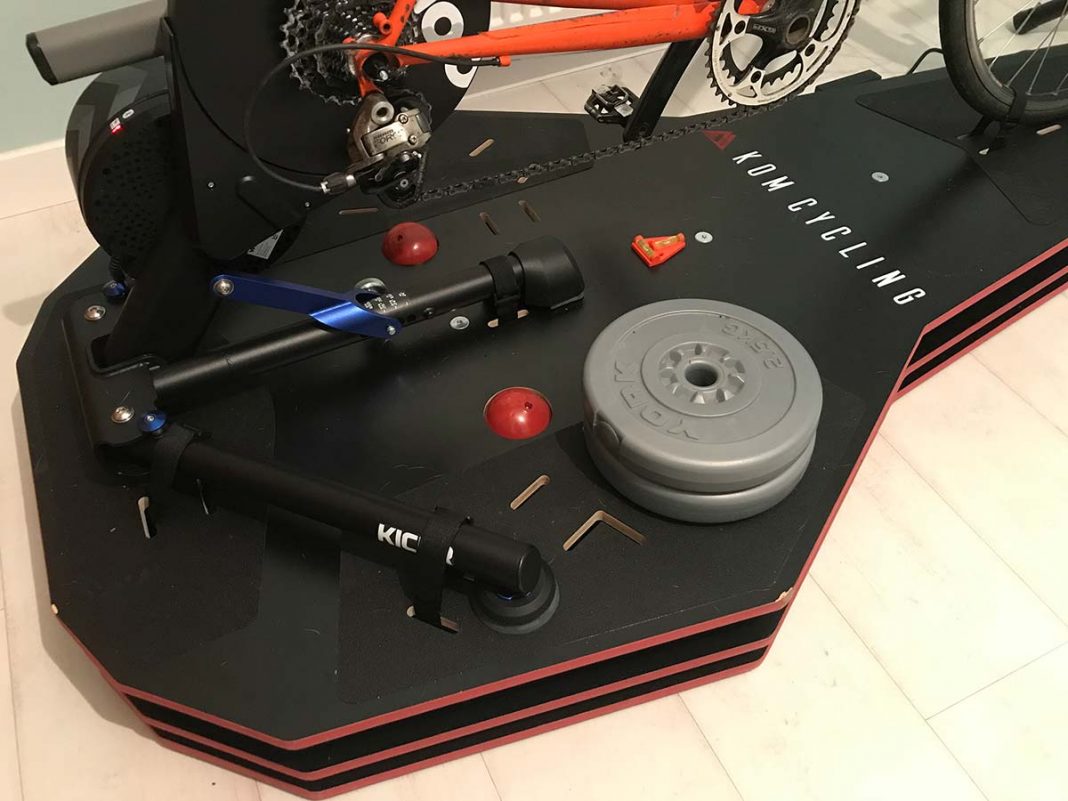 KOM Cycling are setting a new benchmark in indoor cycling with the all-new Full Motion Rocker Plate RPV2. Not only does it rock from side-to-side, but it also offers 9 inches of fore-aft movement too. At $799.99, this has to be the most reasonably priced rocker plate boasting that particular set of features. We put it to the test in our pain cave, loading it up with a Wahoo KICKR smart trainer and an Isla Bikes steel road bike. Here’s how we got on. 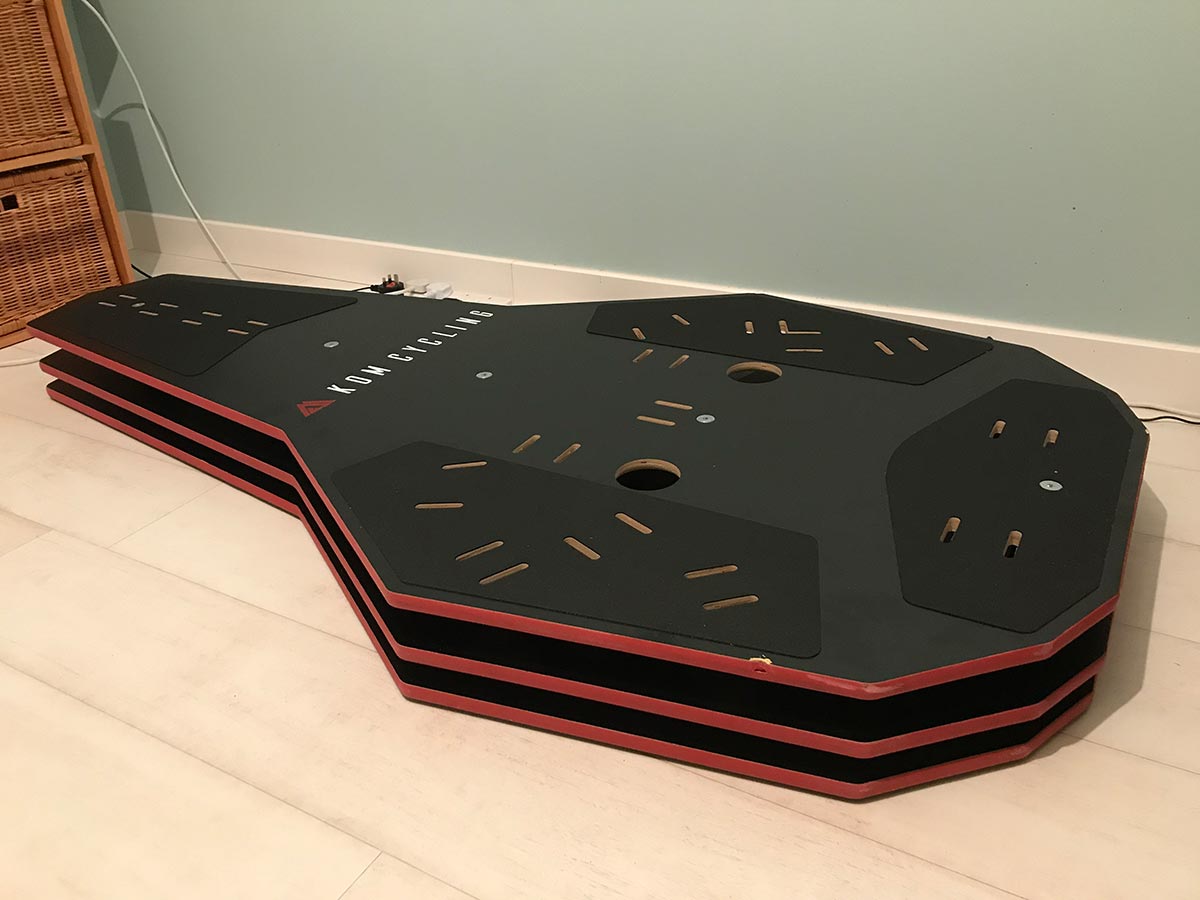 KOM Cycling have added another dimension of movement to their original trainer platform that Zach reviewed back in February. The all-new KOM Full Motion Rocker Plate RPV2 is a natural evolution of the RPV1; in addition to the 13° of side-to-side movement, the RPV2 also offers 9 inches of fore-aft movement for additional comfort for your indoor training setup. 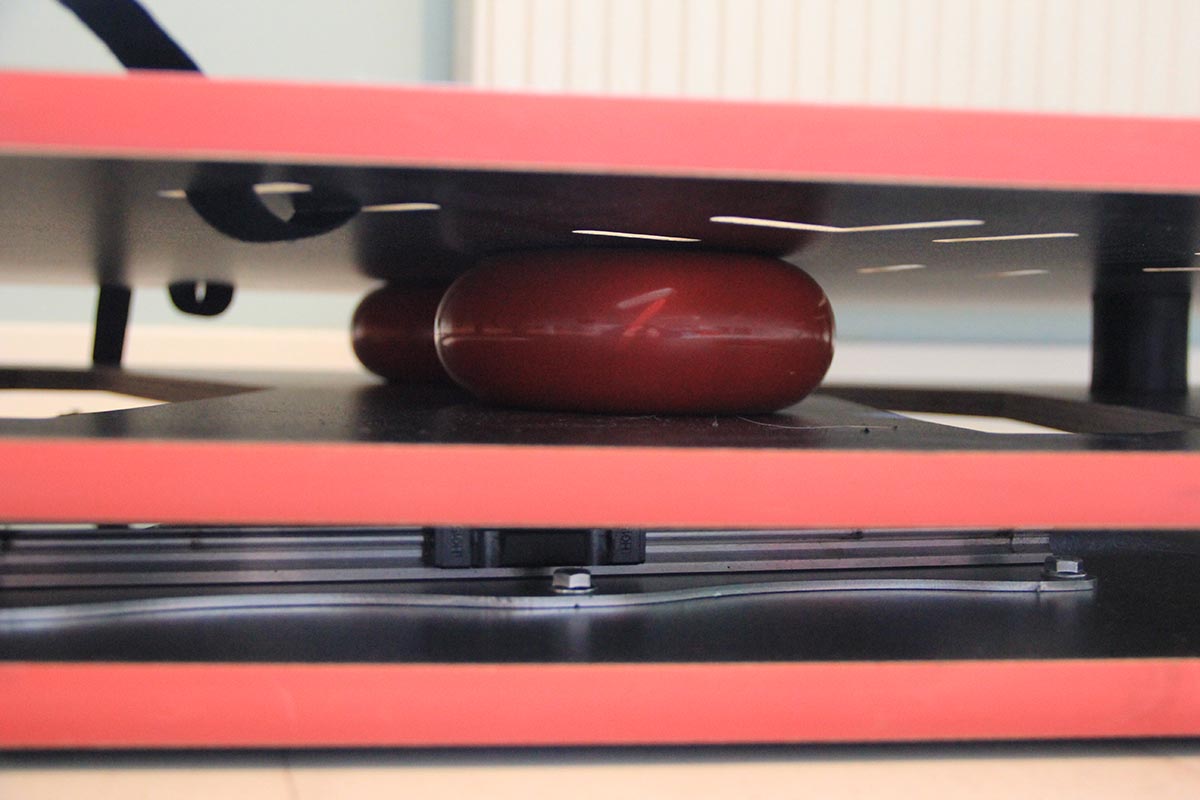 The RPV2 consists of three Lauan boards stacked on top of one another. The top and middle boards are connected to one another via rubber isolation mounts that run down the centre-line. On each side, an inflatable ball separates the two boards, providing a tuneable level of support for the side-to-side movement. 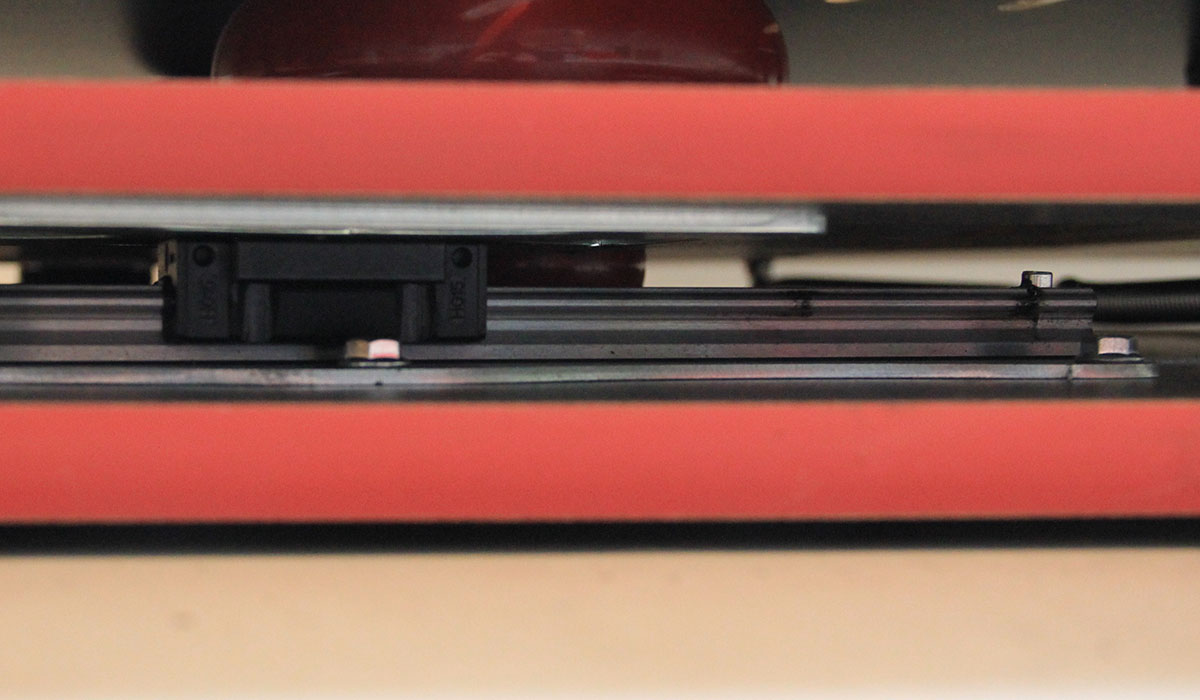 Between the base board and the middle board sit three roller bearing rails that allow the upper assembly (top and middle boards combined) to move forwards and backwards relative to the base board. A coil spring ensures the boards return to their original position. 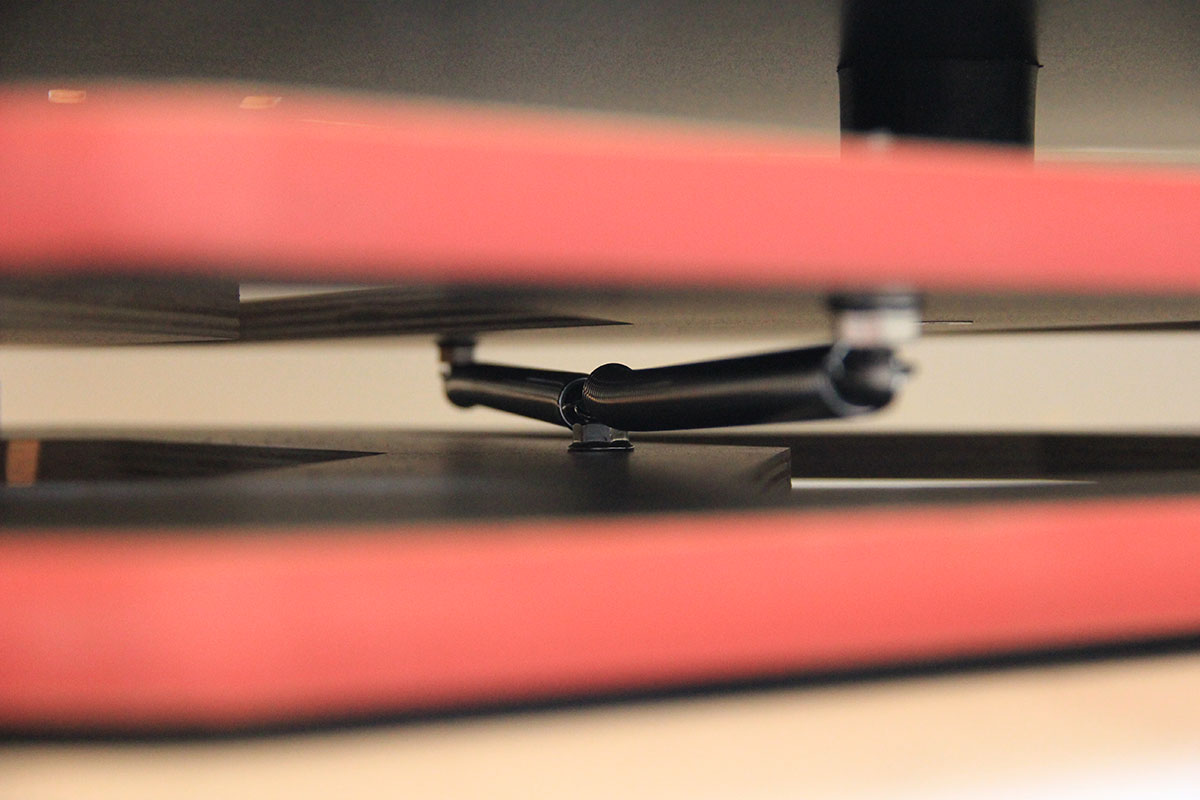 Why would I want to buy one?

You’ve already forked out $1200 on a Wahoo KICKR and committed to a Zwift membership, and you’ve bought yourself a decent fan to make the whole experience more bearable, not to mention the costs associated with the bike itself. Do you really need to spend an extra $799.99 on a rocker plate? The short answer is no. No one needs a rocker plate, but this is why KOM Cycling say you should buy the new Full Motion RPV2 platform:

To put these claims to the test, we’ve ridden the RPV2 over the last two months using a Wahoo KICKR smart trainer. KOM say the platform is also compatible with other popular trainers from Saris, TACX and Elite.

Setting up the Full Motion RPV2 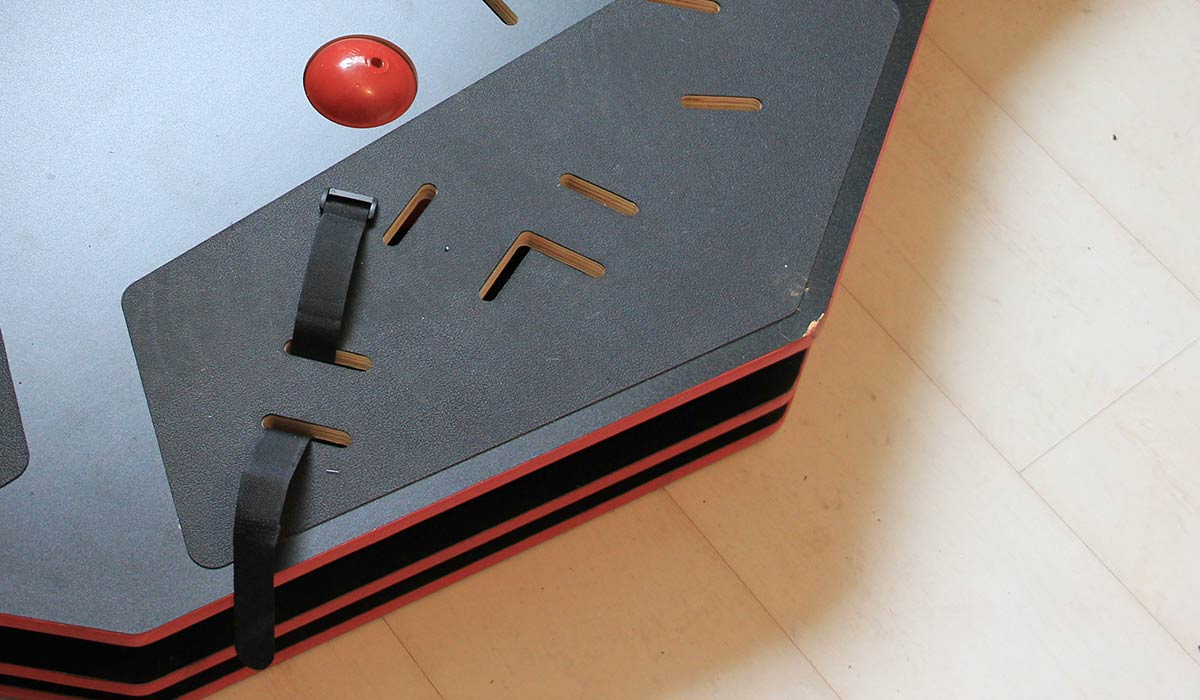 KOM Cycling shipped the Full Motion Rocker Plate in a cardboard box shaped much like the rocker itself. The box had evidently received a bit of a bashing along its travels and the rocker plate had a few scuff marks and chips out of the wood around the edges. Fortunately, the damage was purely aesthetic. Though, they’d probably do better to ship the rocker in a full size bike box with protection inserts in future.

The rocker came with seven velcro straps, four inflatable balls and a pump. The package was meant to include a spirit level but this item was missing. Luckily, we had one to hand anyway.

Setup could be done by one person alone, but I was very glad to have the help of a friend to make the process quicker and easier – the Wahoo KICKR is a pretty heavy piece of kit! The rocker plate did not ship with any instructions, so we worked through the setup in as logical a fashion as we could.

We began by lifting the Wahoo KICKR, and bike, onto the rocker plate, lining the flywheel up with the centre line. We then partially inflated two balls, sandwiching them between the top and middle boards with the valve pointing upwards for further inflation later on. 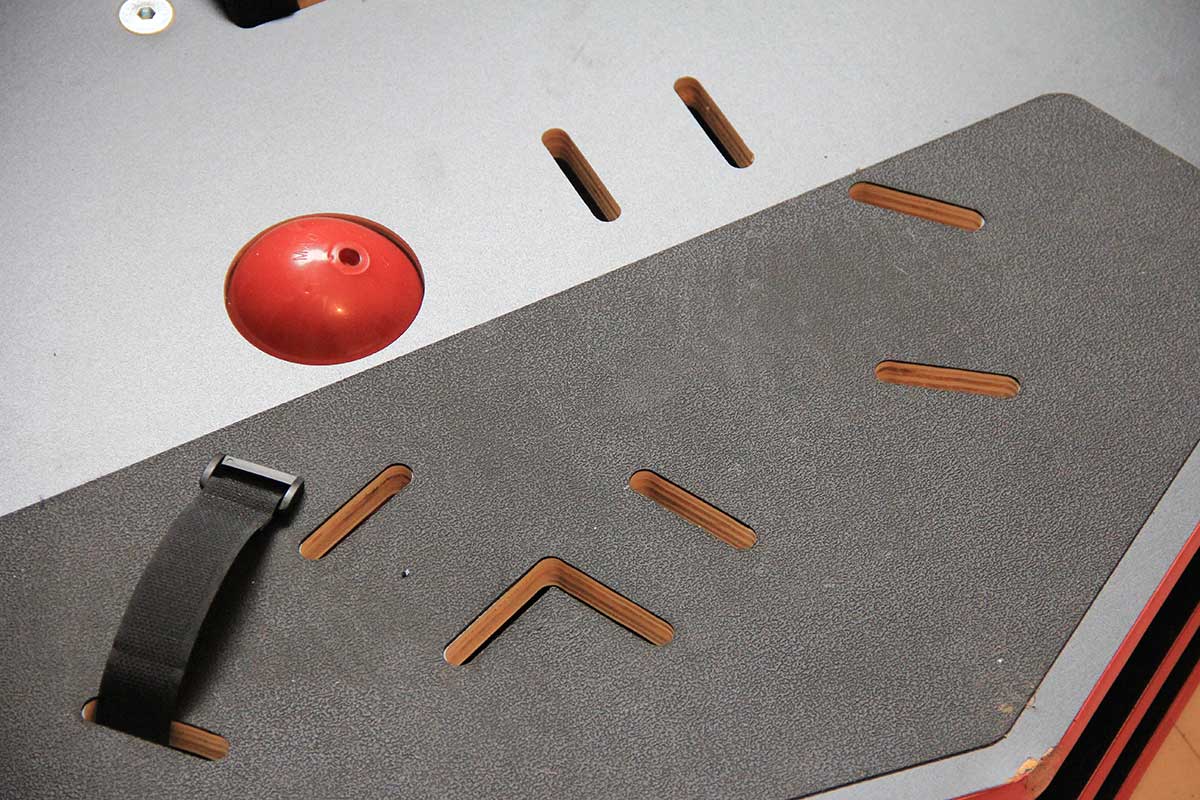 The top board of the KOM RPV2 platform has 25 holes through which you can route your seven velcro straps to secure the trainer. We used all seven; two at the rear, one at the end of each articulating leg, and one along the middle shaft. We found the straps to be more than sufficient, cinching the trainer down tight. 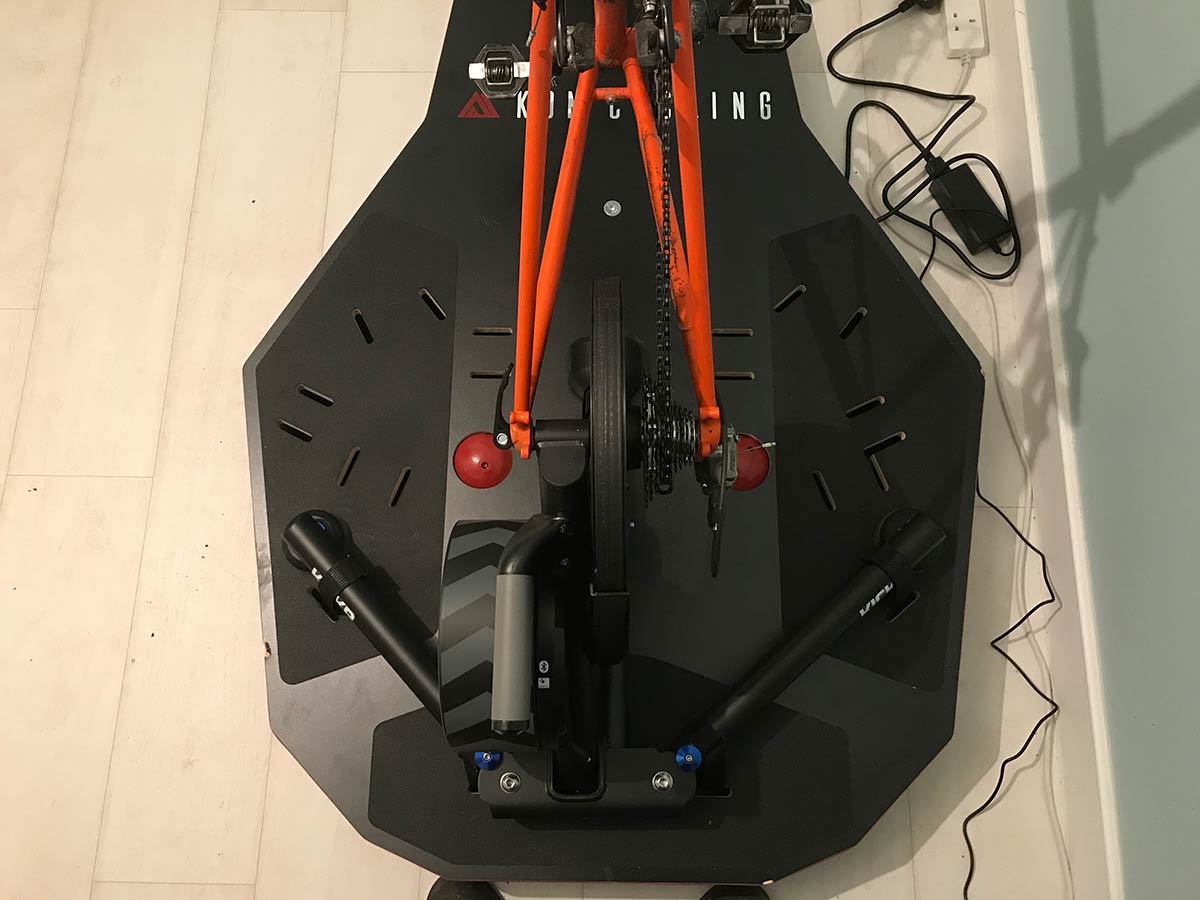 This is just one of two ways in which you can account for the imbalance, and actually, we wouldn’t recommend it. The disparity in pressure between the two balls means that the platform tilts to the lower pressure side more easily than the higher pressure side. And, it returns more slowly. There is a much better way of accounting for the weight imbalance. 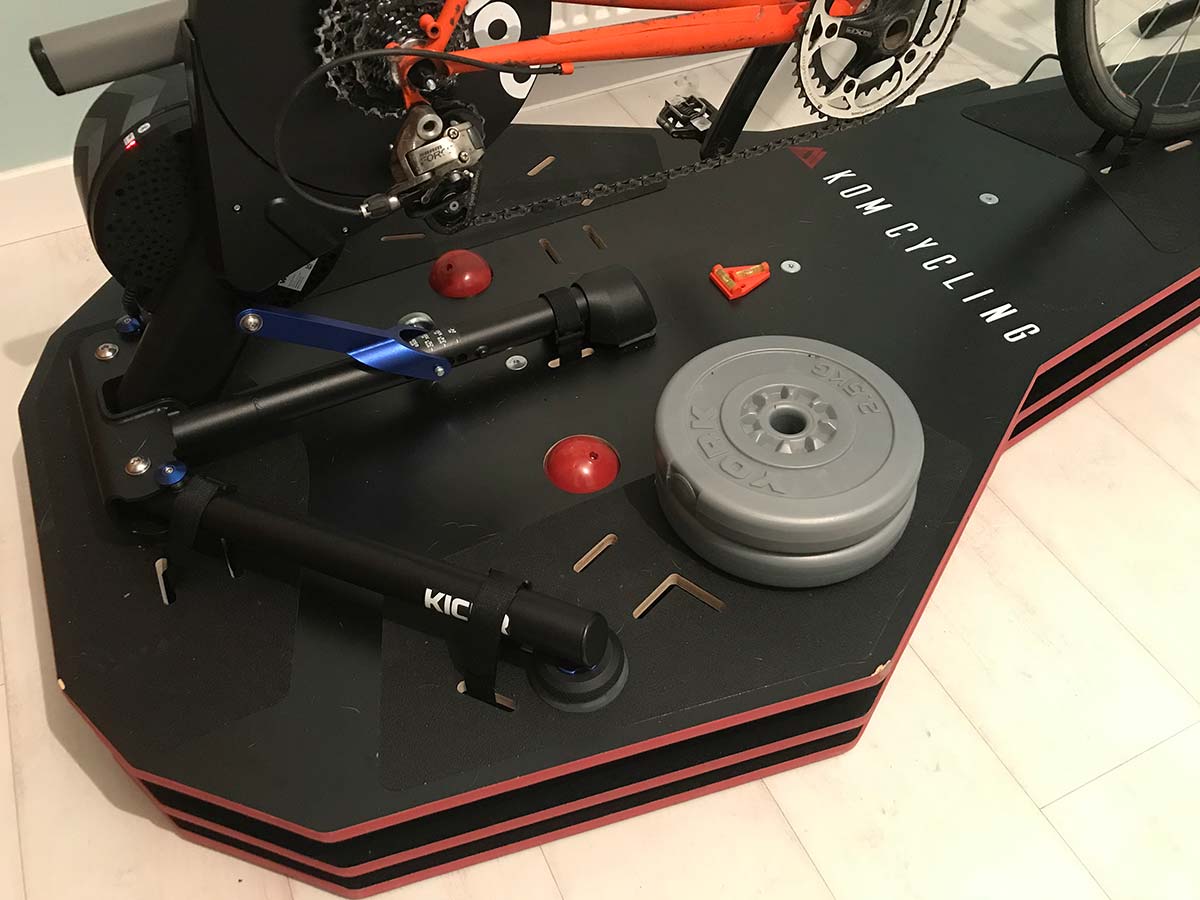 Once you have it level, you can tune the side-to-side movement through altering the pressure in the inflatable balls. KOM recommend you set up the rocker so that when you stand on each edge, the top board only just about contacts the middle board. This will likely be a good setup for experienced riders, while those new to using a rocker plate may prefer to run the balls at a higher pressure for more support.

Top Tip: Make sure you have adjusted the feet of the trainer such that they are equal on both sides before mounting it to the platform! This will make your life somewhat easier.

With the platform level and the trainer and front wheel properly secured, it was time to give it a shot. 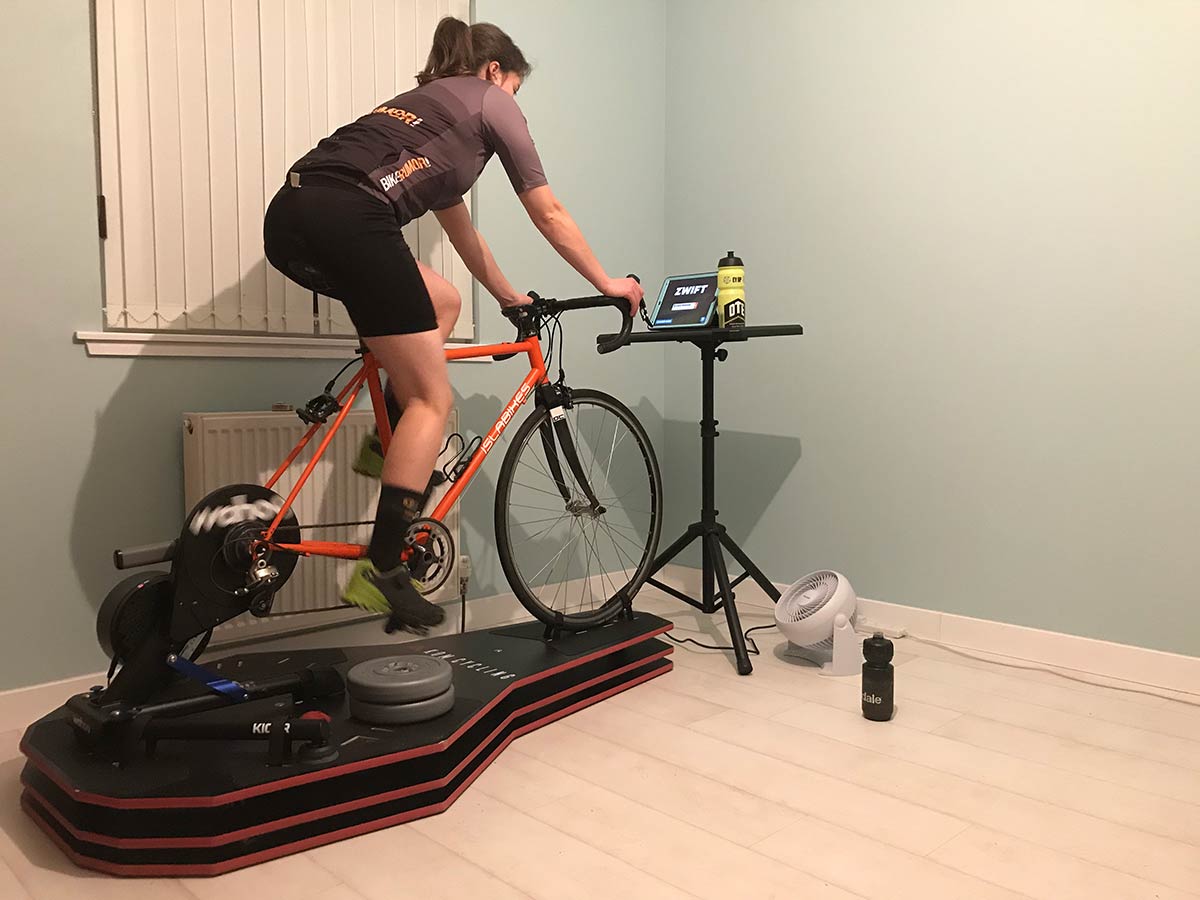 It did feel strange to start with but, once I was used to the movement of the plate, it did feel good. If you’re lazy with your riding, it can feel very cumbersome and distracting. However, if you engage your core and concentrate more on your upper body position, as you would on the road, the ride feel improves immensely and your workout becomes more like real world riding.

The bike is constantly moving while you’re pedaling and any shift in body weight will cause movement which makes it feel pretty realistic when seated pedaling.

Out of the saddle pedaling does feel strange to start with. This is where the benefit of the fore-aft movement is most obvious. Although it doesn’t feel quite as realistic as seated pedaling, it is by far and away better than out of the saddle efforts feel on a static trainer. The fore-aft movement means you can take a bit of pressure off your hands and drive with your legs more actively, rather than simply passively allowing your body weight to drive each pedal stroke down.

I was definitely more comfortable on longer rides, and found myself shuffling about on the saddle a lot less. Any movement you do make in the saddle is ‘softened’ by the movement of the plate, both side to side and back and forth, so the friction between saddle, shorts and skin is lessened.

When mounting and dismounting, I noticed that the anti-slip pads on the plate were not where I was placing my feet. The plate moves quite a lot while mounting, so secure footing is needed especially if you use carbon soles and road cleats.

Having the front wheel strapped down to the plate doesn’t make any difference to seated pedaling, however it does feel better if the wheel is allowed to move side to side when out of the saddle. Plus, if you’re someone who likes to play Hustle City, like Zach, you’ll definitely want to ride without the front wheel straps so you can turn the front wheel to “steer”.

The KOM Full Motion RPV2 is a very reasonably priced rocker plate for indoor training which will definitely make your training sessions more comfortable and feel more like real world riding. While our overall impression of the KOM Full Motion Rocker Plate RPV2 was a very good one, there were two things we felt could be improved on. 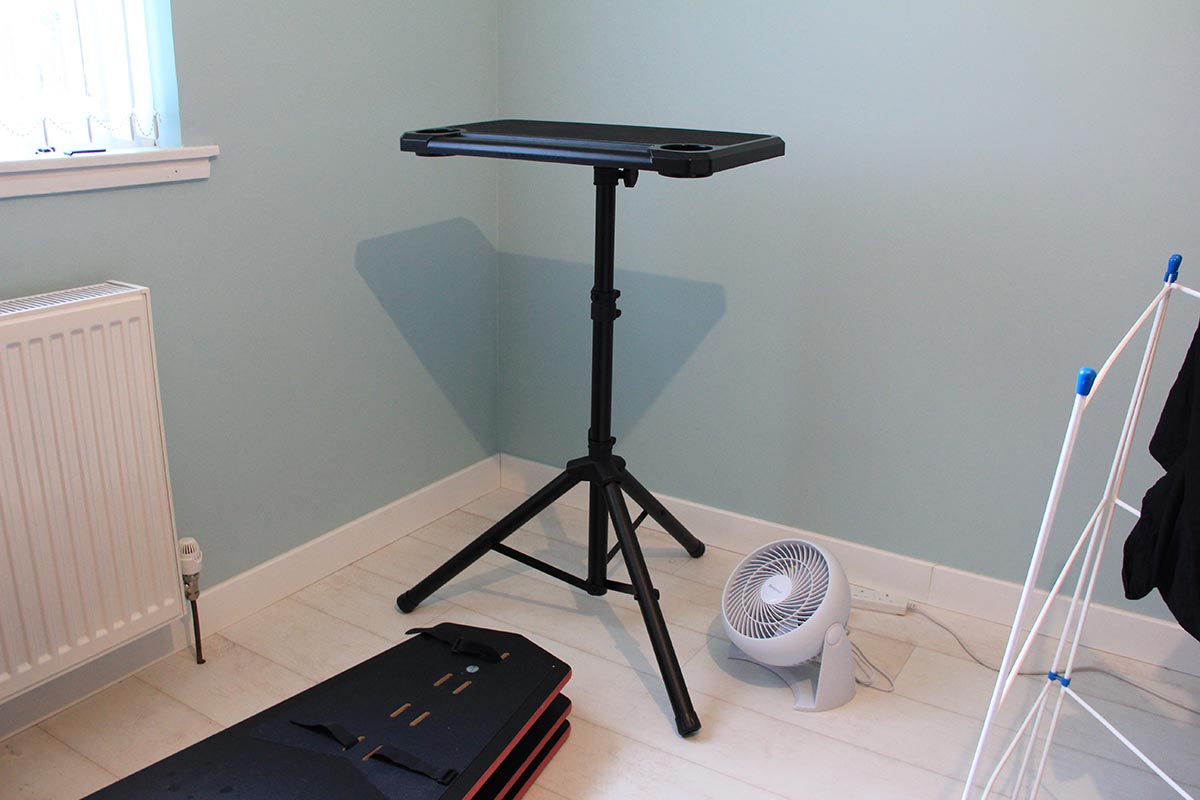 As part of our indoor training setup, we used the KOM Media Display. This is a height and angle adjustable stand which has two drinks holders and a high-friction surface cover on which you can mount a laptop or a tablet, or whatever you’re using to see your Zwift avatar on. 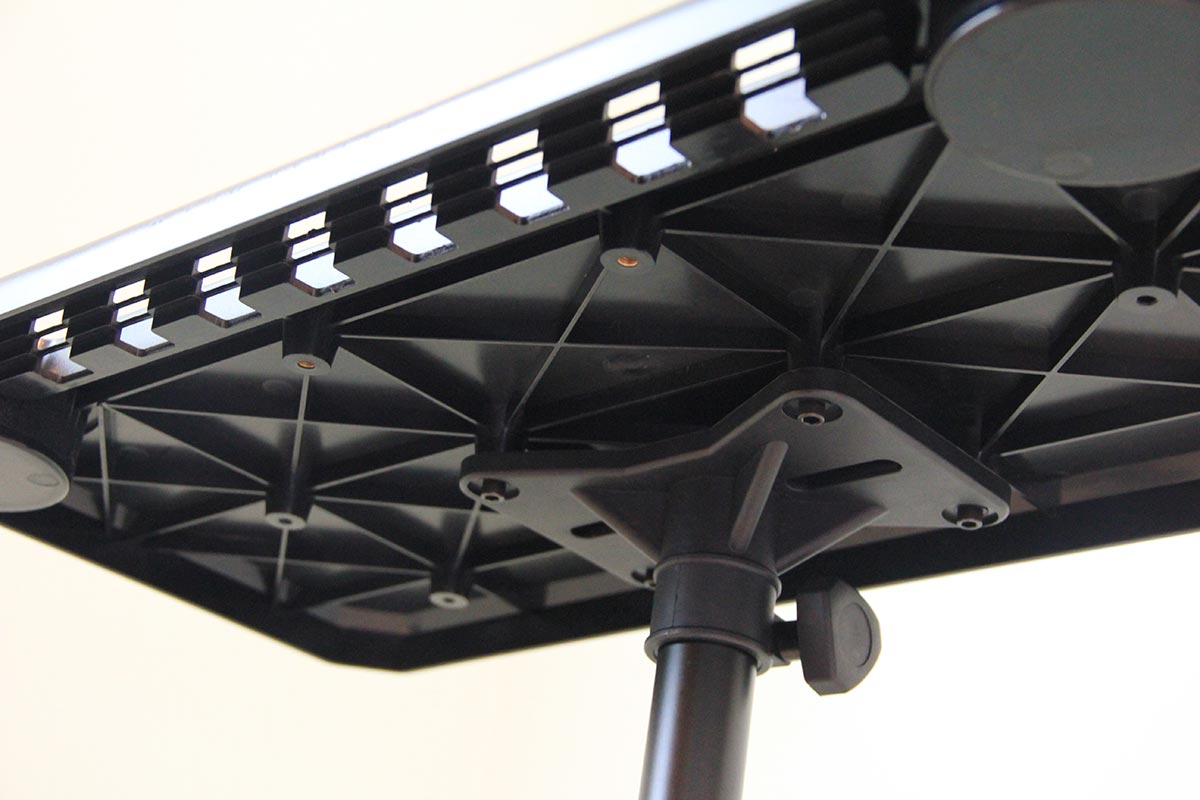 The top platform of the media display can be mounted in two different positions, so that it hangs more or less over the front wheel of the bike. For our setup, we preferred to mount it in the overhanging position. This meant it was closer making it easier to reach for a bottle.

We did note, however, that we couldn’t place the media display quite as close to the rocker as we might have liked. That’s because you have to take into account the fore-aft movement of the RPV2 when positioning it before your ride. If it is too close, you can quite easily hit it with your front wheel as the platform moves forward on the rails.

The all-new KOM Full Motion Rocker Plate RPV2 retails at $799.99, around $400 cheaper than its competitor, the Saris MP1 Trainer Platform. Though it’s not currently in stock, you should be able to pick up the KOM Media Display for $89.99 on Amazon soon.