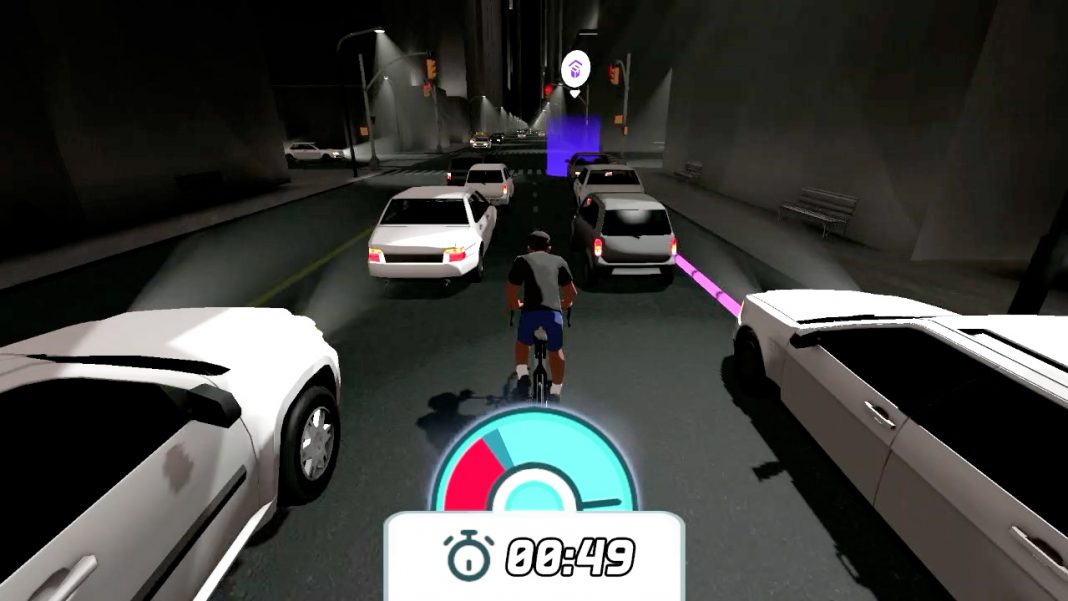 Will Baldwin is about to take to the streets. Well, a virtual Will Baldwin will be riding on virtual streets as the main character in Hustle City – the latest way to make your trainer rides more fun. 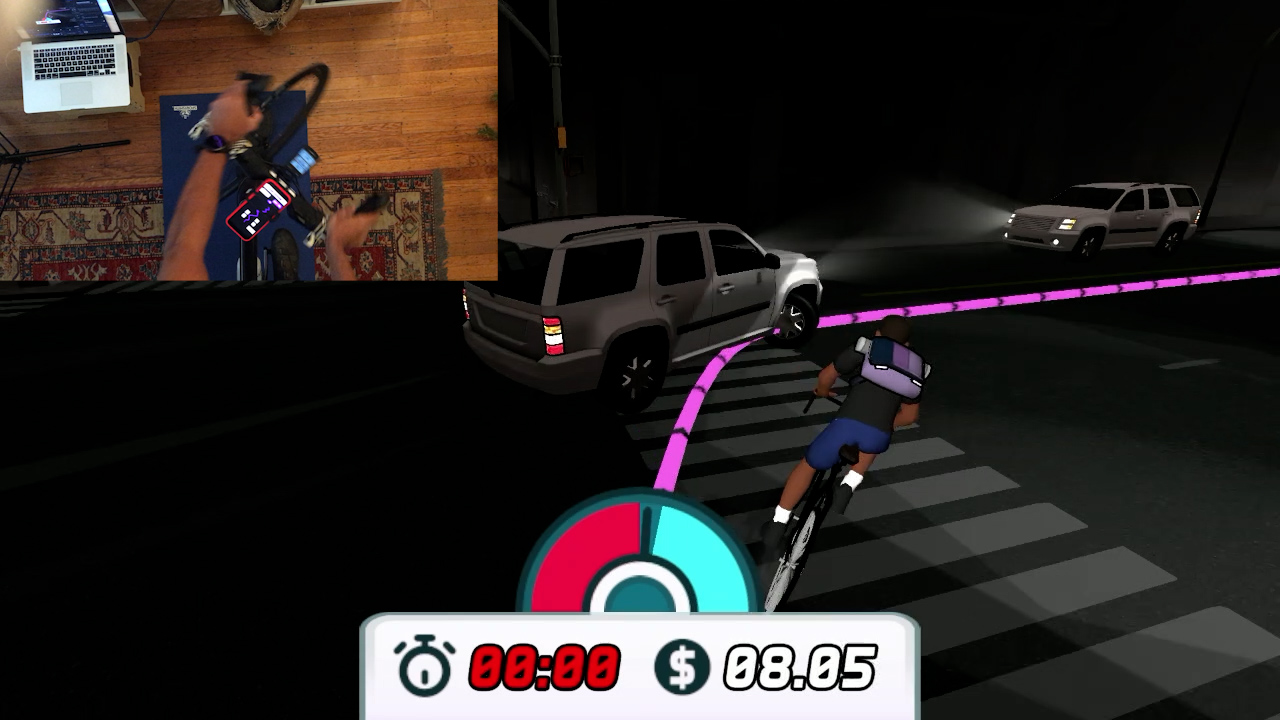 Just a few months ago, Hustle City announced that they were aiming to launch the full game by fall 2021. But here we are in April, with Hustle City set for a wide release next week on May 5th. Granted, this will only be for Season One, but it bodes well for the future of the game.

Based on the saga of the fictional Will Baldwin, the game follows the rise of cycling messenger who has to hustle through the streets of Hustle City. For you, that means using the steering input from your bike to guide the character through the game. That includes avoiding traffic, lamp posts, benches, and buildings (which will all make you crash) while following hot lines, trying to deliver packages on time to make as much money as possible.

To make it all work, the game requires a BLE smart trainer, an iPhone, and an Airplay capable device so you can Airplay the game from your phone. For me, that meant investing in a Roku Premier ($34.99) so I could Airplay to an older TV. You’ll also need some way of securely mounting your phone to your handlebars – I use a Garmin mount with an iOmounts Garmin Adapter since I use the iOmounts system on just about everything. 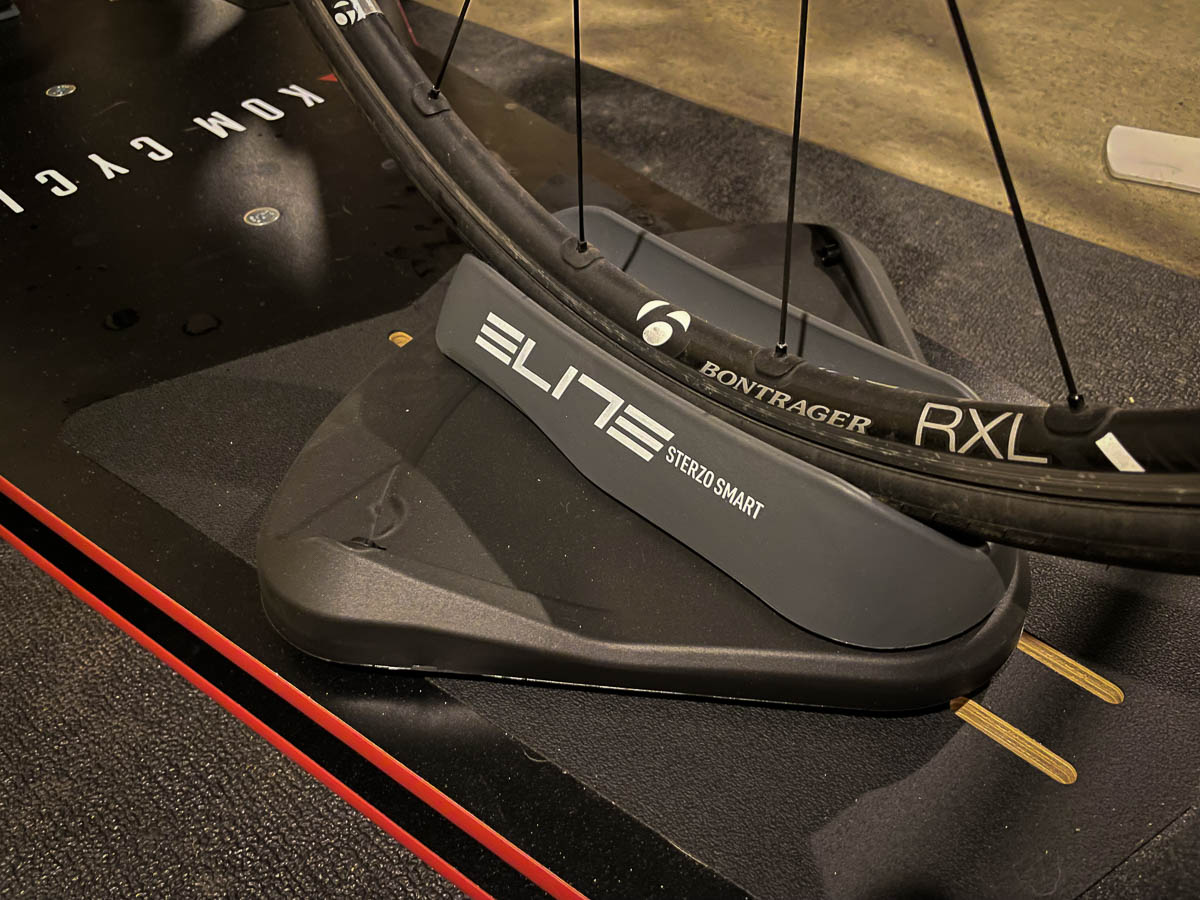 You’ll also need to make sure your front wheel can rotate freely in order to steer. There are a number of things you can use around the house to sort of hack a turning platform, with varied efficacy. I thought it would be a good chance to try out the Elite Sterzo Smart, but it highlighted what happens when peripherals are developed before the games themselves are established. The steering in Hustle City can require big inputs in order to make a u-turn, or avoid traffic – inputs that are simply too big for the Sterzo’s limited range of motion. I’m sure the Sterzo will improve over time, but currently it’s not a great match for the game (you also don’t need the Smart version since Hustle City only uses your phone, and isn’t yet compatible with devices like the Sterzo Smart).

For a game that seemingly came out of nowhere, it’s been impressive to see how quickly the game play has improved over beta versions we’ve been able to test. The game isn’t perfect just yet, but it’s seen a big improvement over the span of a few months. In terms of the steering input itself, I’d say that Hustle City delivers a better and more controllable experience than Zwift, which is saying something considering that Zwift likely has a bigger development team with more resources. That steering needs to be precise and easy to control because in order to do well in Hustle City, you have to weave through traffic, slowing to avoid crashes, and splitting the gaps between light posts and building corners.

While riding, your phone will give you in-game progress, real time power output, and the ability to pause the game or recalibrate your steering (important if you bump your phone during spirited efforts). I’d like to see the ability to connect a heart rate monitor and see your HR, as well as better mapping to chase down short cuts, but for now the game is far more playable than the early beta versions.

Most importantly, the game play is so fun that you forget you’re getting an intense workout on your trainer. Time flies by, and the game encourages you to push the watts and your heart rate (which could lead some users to wanting an option to change the difficulty).